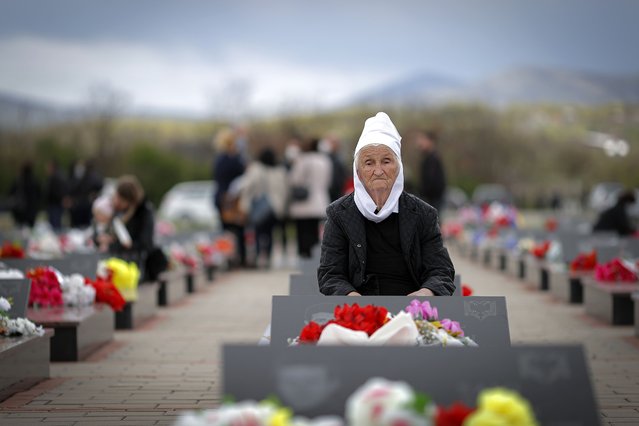 Vase Tahiraj, 89, mourns his only son during the ceremony to mark the “Day of Missing Persons” at the cemetery in the village of Meje, Kosovo, 27 April 2021. The 27th of April marks the day of missing people from the 1998-99 war between Serb security forces and Albanian guerrillas, in Kosovo. The massacre in 1999 by Serb security forces left about 400 civilians dead in the village of Meje. (Photo by Valdrin Xhemaj/EPA/EFE) 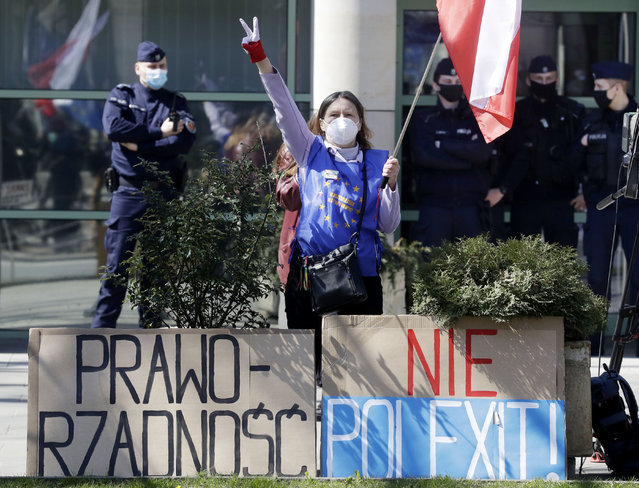 A woman wearing a vest inspired by the European Union flag and holding a Polish flag protests outside the Constitutional Tribunal in Warsaw, Poland, on Wednesday April 28, 2021. The constitutional court was to rule on Wednesday on whether Polish or European Union law has primacy in the country. It delayed its proceedings until May 13. Its ruling could affect the future relationship of the EU member nation with the rest of the bloc. (Photo by Czarek Sokolowski/AP Photo) 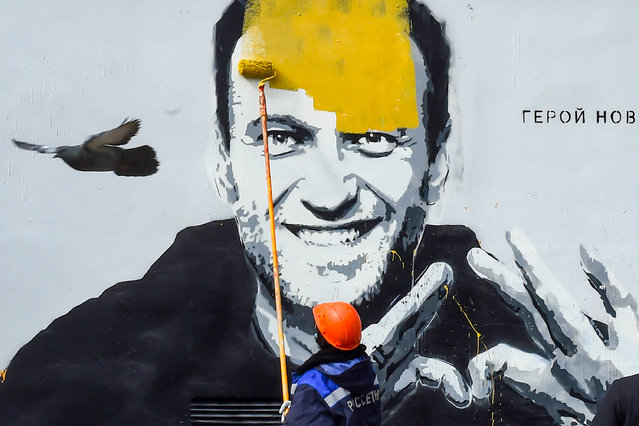 Municipal workers paint over a graffiti depicting jailed Russian opposition politician Alexei Navalny with wordings reading, “The hero of the new age”, in St. Petersburg, Russia, 28 April 2021. Navalny is currently being held at a prison camp northeast of Moscow, sentenced to imprisonment at the penal camp in early February 2021 for violating parole requirements related to an earlier suspended sentence over 2014 embezzlement charges. (Photo by Olga Maltseva/AFP Photo) 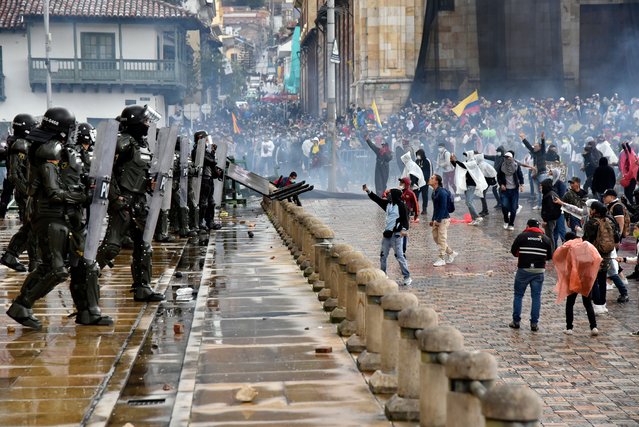 Protesters throw objects and shout to riot police officers at Bolivar square during the national strike against the tax reform proposed by Duque's administration on April 28, 2021 in Bogota, Colombia. Unions joined to call to a national strike and demonstrations in major cities, urging participants to follow COVID-19 protocols. They seek to sink a tax reform which proposes elimination of VAT free goods. As the third wave of COVID hits the country, Colombia sets new records of deaths per day. (Photo by Guillermo Legaria/Getty Images)

A demonstrator places a cross symbolising the ones who died from the coronavirus disease (COVID-19) in front of the National Congress in Brasilia, Brazil on April 27, 2021. (Photo by Ueslei Marcelino/Reuters) 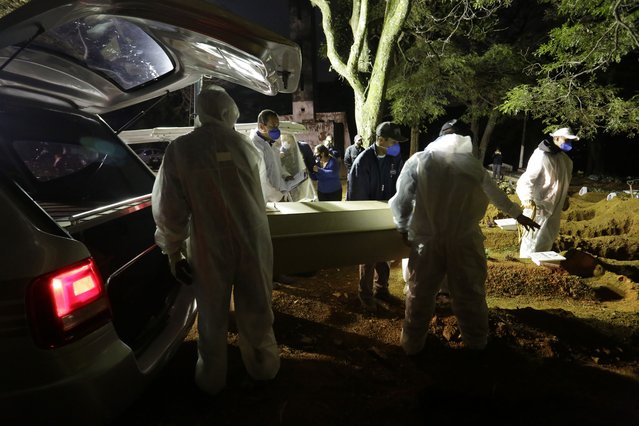 Cemetery workers carry the coffin of a COVID-19 victim to his grave during a nighttime funeral at the Vila Formosa cemetery in Sao Paulo, Brazil, Wednesday, April 28, 2021. (Photo by Nelson Antoine/AP Photo) 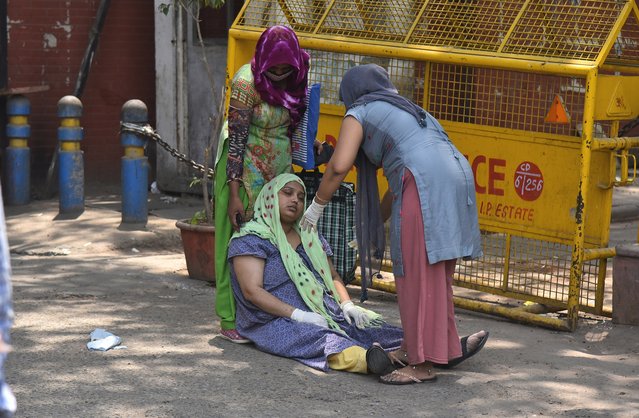 A suspected covid-19 positive patient with family members wait for treatment outside of the Covid-19 hospital in New Delhi, India, 27 April 2021. The WHO Chief Tedros Adhanom Ghebreyesus told reporters that the situation in India is beyond heartbreaking after India recorded a massive surge of 332,730 fresh Covid-19 cases and 2,771 deaths, the highest single-day spike in COVID-19 infections and also struggling with the oxygen supply. (Photo by Idrees Mohammed/EPA/EFE) 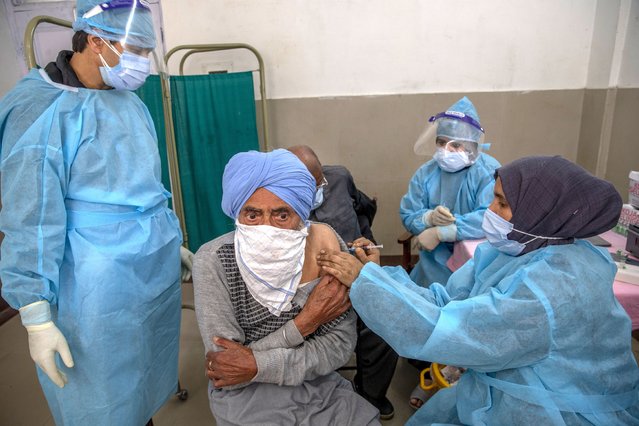 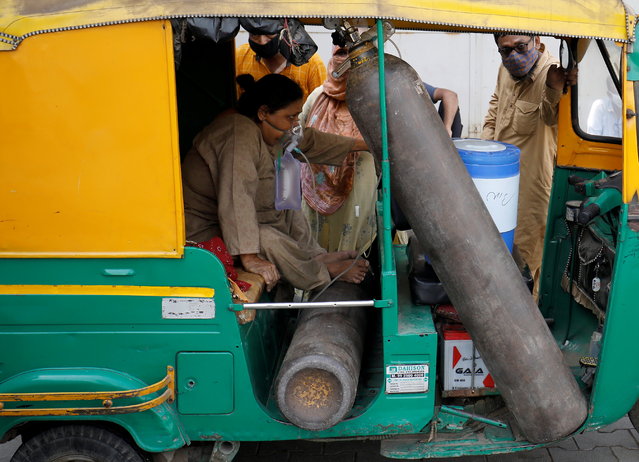 Aminbanu Memon wearing an oxygen mask sits in an autorickshaw waiting to enter a COVID-19 hospital for treatment, amidst the spread of the coronavirus disease (COVID-19) in Ahmedabad, India, April 28, 2021. (Photo by Amit Dave/Reuters) 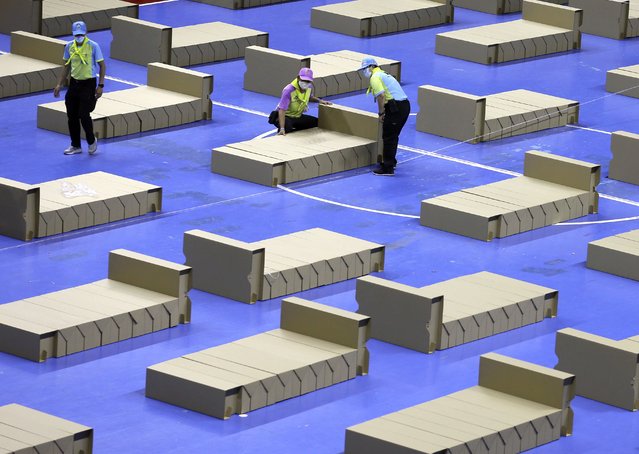 Volunteers prepare beds for patients to combat the rapid rise of COVID-19 coronavirus pandemic, at the Pre-admission Center set up inside the Nimibutr stadium in Bangkok, Thailand, 28 April 2021. Thai public health will use the Rajamangala National Stadium, Hua Mak Indoor Stadium and Nimibutr Stadium to set up the pre-admission center to tackle bed shortage, before sending the patient to the hospital according to the level of symptoms, as the COVID-19 infections surge in Bangkok. (Photo by Narong Sangnak/EPA/EFE) 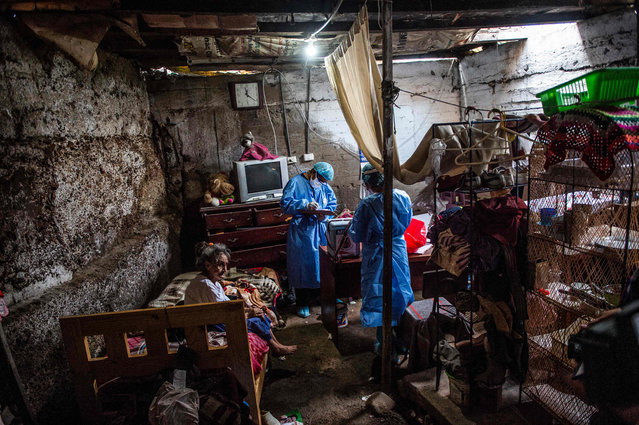 Health workers prepare to inoculate Tomasa Olguin with a dose of the Pfizer-BioNTech vaccine against COVID-19, at her house in El Agustino district in Lima, on April 28, 2021. (Photo by Ernesto Benavides/AFP Photo) 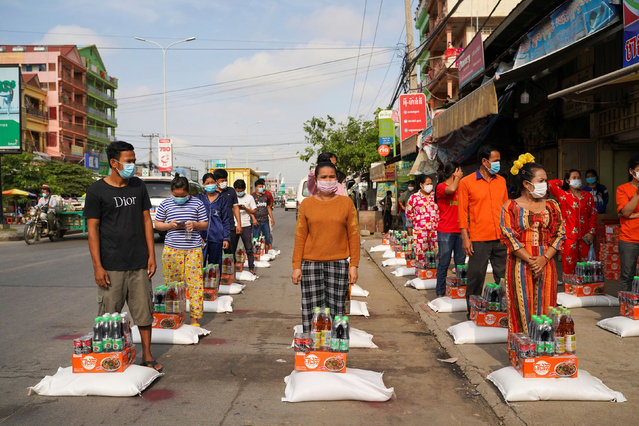 Workers receive food donations inside a “red zone”, which has stricter lockdown measures imposed due to the coronavirus disease (COVID-19) outbreak, in Phnom Penh, Cambodia, April 28, 2021. (Photo by Cindy Liu/Reuters) 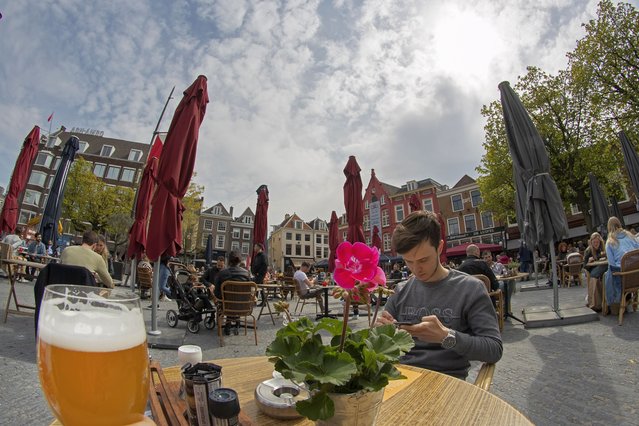 A guest shows his glass of beer to the photographer as Dutch customers eager for their first drink of coffee or something stronger at a cafe terrace have flocked to outdoor seating as the Netherlands' lockdown eased in Utrecht, Wednesday, April 28, 2021. The Netherlands became the latest European country to begin cautiously relaxing its lockdown even as infection rates and intensive care occupancy remain stubbornly high. The Dutch follow Italy, Greece, France and other European nations in moving to reopen society and edge away from economically crippling lockdowns in the coming weeks.(Photo by Peter Dejong/AP Photo) 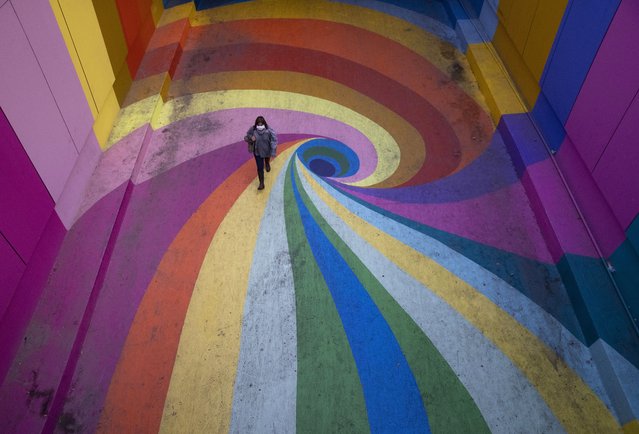 A woman walks through the rainbow-colored Paseo Bandera in Santiago, Chile, Tuesday, April 27, 2021, empty of visitors amid the new coronavirus pandemic. (Photo by Esteban Felix/AP Photo) 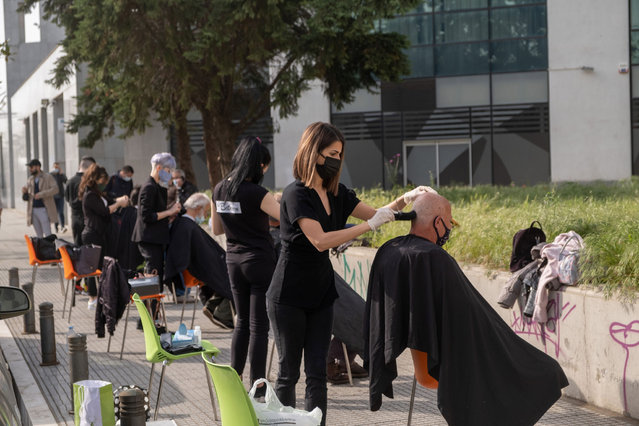 Hairdressers of Thessaloniki provide haircuts to homeless people outside of a shelter for the homeless in Thessaloniki, northern​ Greece, 28 April 2021. (Photo by Nikos Arvanitidis/EPA/EFE) 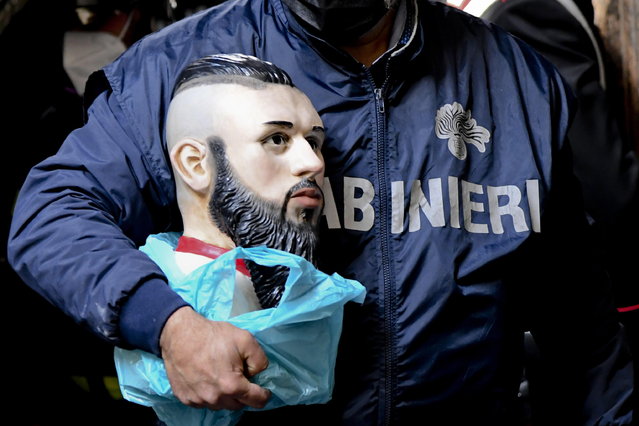 A carabiniere officer removes the bust containing the ashes of the “baby boss” Emanuele Sibillo, killed in a Camorra ambush, from the votive chapel in the historic center building in Naples, Italy, 28 April 2021. The ashes of a Neapolitan Camorra mafia “youth boss” slain in 2015 at the age of 20 have been found in an altar in a private resident in Naples, police said on 28 April after removing several tributes to the cult mafia figure in the southern Italian city. Emanuele Sibillo was a leader of the Camorra's “paranza dei bambini” (“trawler of children”) or Piranhas, used by the local mob for many illegal activities including murder. (Photo by Ciro Fusco/EPA/EFE) 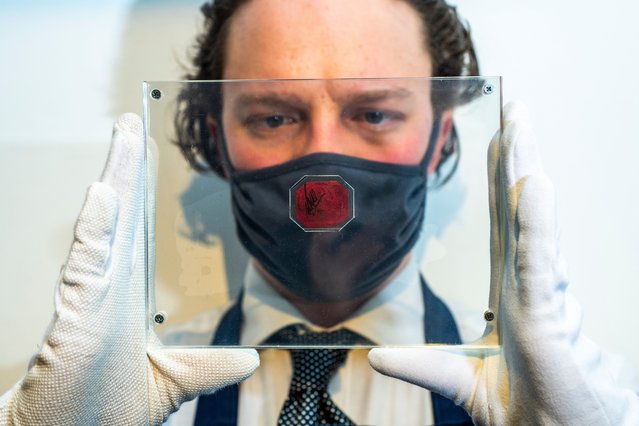 An auction worker poses with a British Guiana One-Cent Magenta stamp as it is displayed at Sotheby's Auction House in London, Britain, 28 April 2021. The stamp is the only known survivor of its kind and was created as a contingency in 1856 when a shortage of stamps usually imported from England threatened to disrupt the postal service throughout British Guiana. With an estimate of 10 to 15 Million UIS Dollars, it will be auctioned at Sotheby's New York on 08 June 2021. (Photo by Jill Mead/The Guardian) 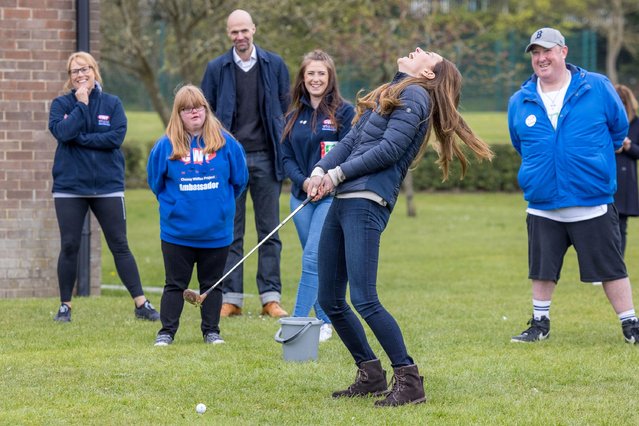