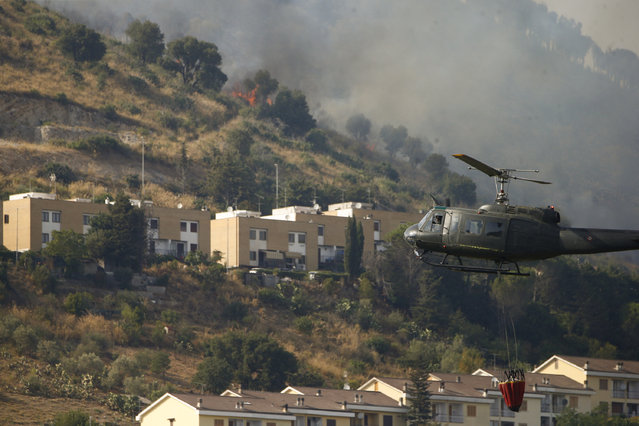 A helicopter drops water over a wildfire in the Monte Castillo area, near Tivoli, just a few miles from Rome, Friday, August 13, 2021. The southern regions of Sicily, Sardinia, Calabria and also central Italy, where temperatures are expected to reach record hights, were badly hit by wildfires. Climate scientists say there is little doubt that climate change from the burning of coal, oil and natural gas is driving extreme events, such as heat waves, droughts, wildfires, floods and storms. (Photo by Cecilia Fabiano/LaPresse via AP Photo) 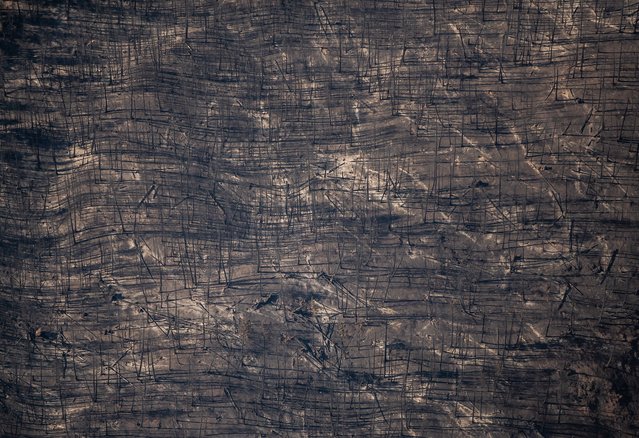 Trees burned by the White Rock Lake wildfire are seen in an aerial view southeast of Kamloops, B.C., on Thursday, August 12, 2021. (Photo by Canadian Press/Rex Features/Shutterstock) 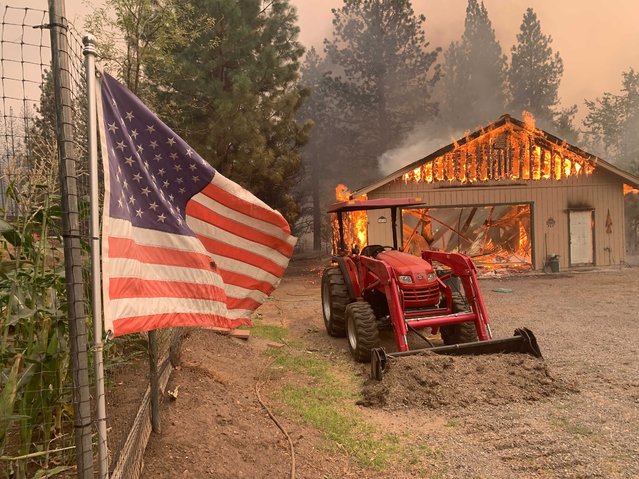 A red tractor is left behind as a home burns outside of Taylorsville in Plumas County, Calif., that was impacted by the Dixie Fire Friday, August 13, 2021. The U.S. Forest Service said Friday it's operating in crisis mode, fully deploying firefighters and maxing out its support system as wildfires continue to break out across the U.S. West. The agency says it has more than twice the number of firefighters working on the ground than at this point a year ago, and is facing "critical resources limitations." An estimated 6,170 firefighters alone are battling the Dixie Fire in Northern California, the largest of 100 large fires burning in 14 states, with dozens more burning in western Canada. It has destroyed more than 1,000 structures in the northern Sierra Nevada. (Photo by Eugene Garcia/AP Photo) 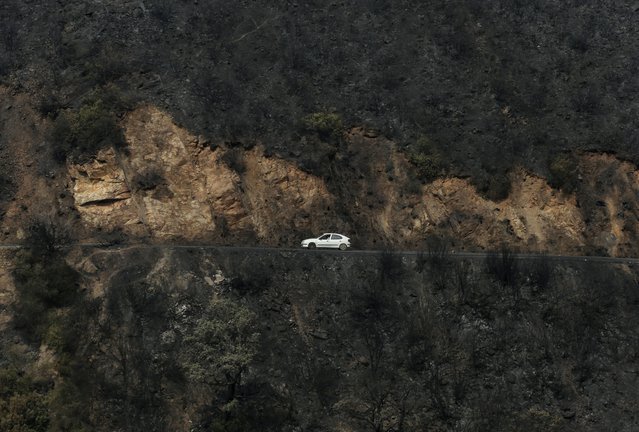 A car drives through a charred forest after a fire near the village of Toudja, in the Kabyle region, east of Algiers, Friday, August 13, 2021. Dozens of fires began devouring forested mountainsides in the Berber region of Kabyle Monday. The President declared a three-day mourning period to honor the lives lost. (Photo by Toufik Doudou/AP Photo) 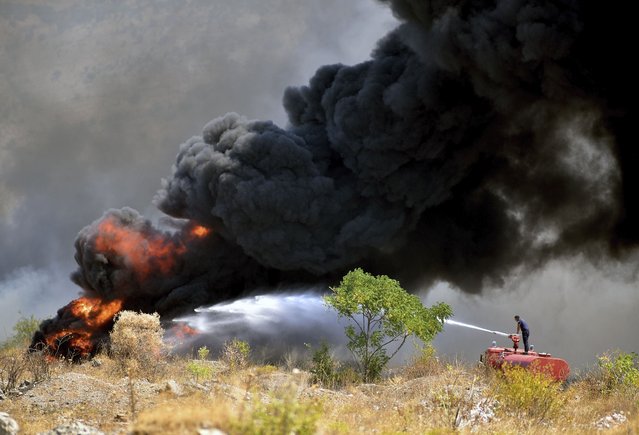 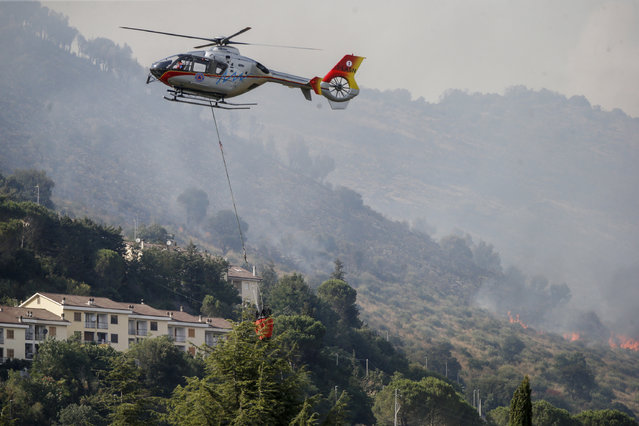 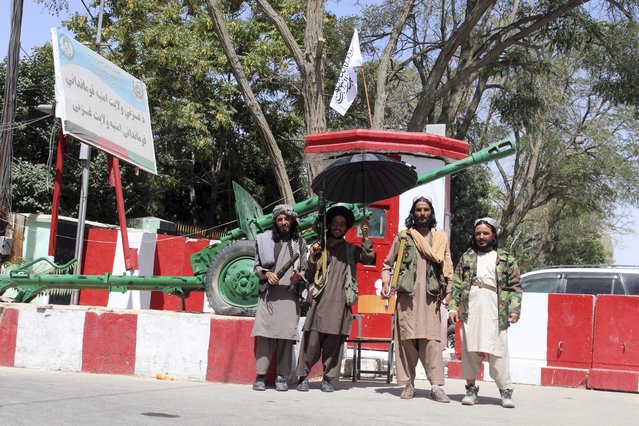 Taliban fighters stand guard inside the city of Ghazni, southwest of Kabul, Afghanistan, Friday, August 13, 2021. The Taliban have completed their sweep of the country’s south on Friday, as they took four more provincial capitals in a lightning offensive that is gradually encircling Kabul, just weeks before the U.S. is set to officially end its two-decade war. (Photo by Gulabuddin Amiri/AP Photo) 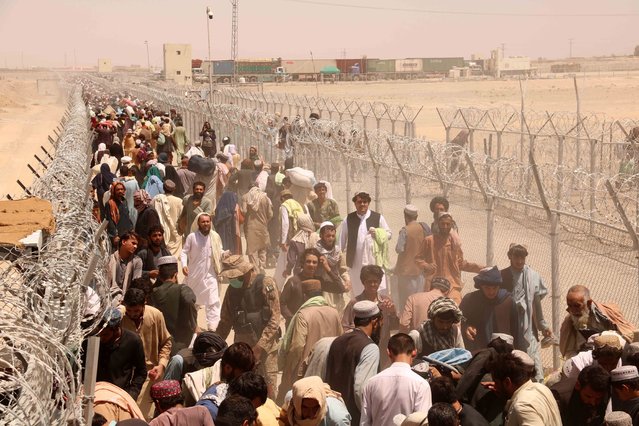 People stranded at the Pakistani-Afghan border wait to cross the border after it was reopened at Chaman, Pakistan, 13 August 2021. Pakistani authorities reopened the border with Afghanistan on 13 August after several days of its closure. Taliban’s shadow governor for Kandahar province had on 05 August issued a statement that announced the closing down of the border with Pakistan at Chaman, and said Islamabad should relax rules for crossing the frontier. (Photo by Akhter Gulfam/EPA/EFE) 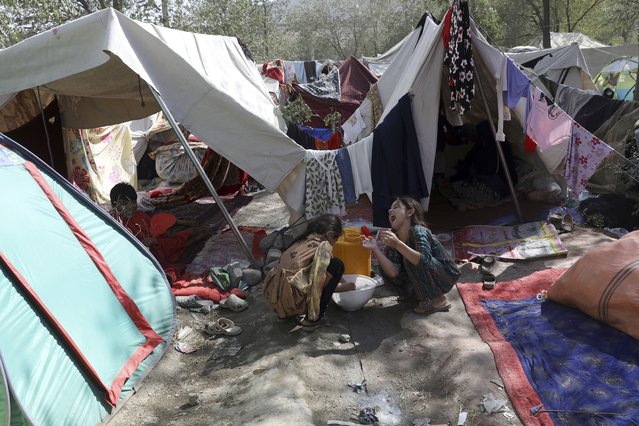 Internally displaced Afghans from northern provinces, who fled their home due to fighting between the Taliban and Afghan security personnel, take refuge in a public park Kabul, Afghanistan, Friday, August 13, 2021. (Photo by Rahmat Gul/AP Photo) 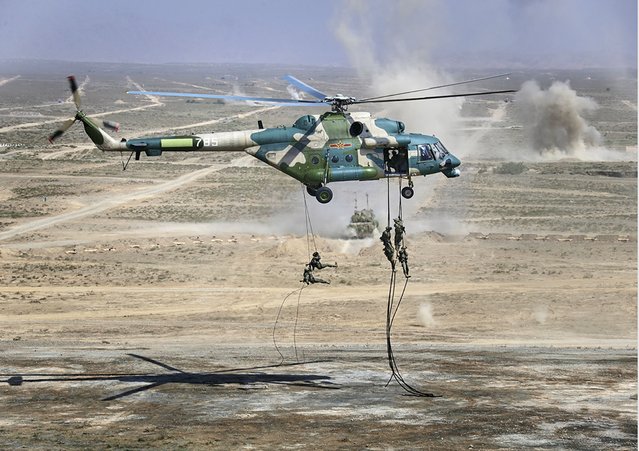 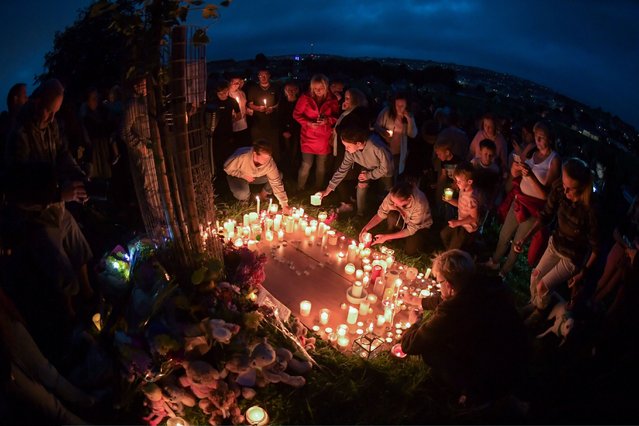 A candlelit vigil takes place at North Down Crescent Park on August 13, 2021 in Plymouth, England. Police were called to a serious firearms incident in the Keyham area of Plymouth on Thursday evening where lone gunman, named by police as Jake Davison, 22, shot and killed five people before turning the gun on himself. (Photo by Finnbarr Webster/Getty Images) 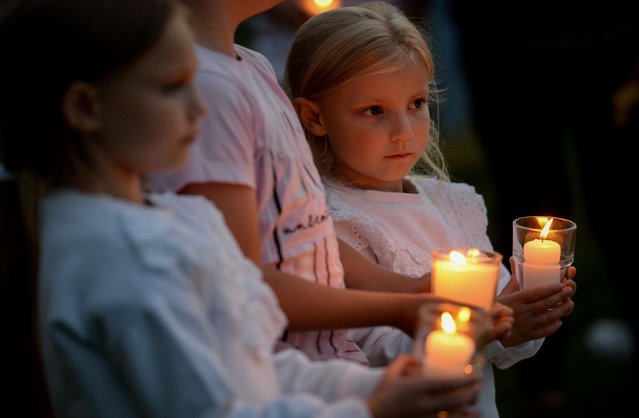 Hollie holds a candle during the candlelit vigil at North Down Crescent Park on August 13, 2021 in Plymouth, England. (Photo by Finnbarr Webster/Getty Images) 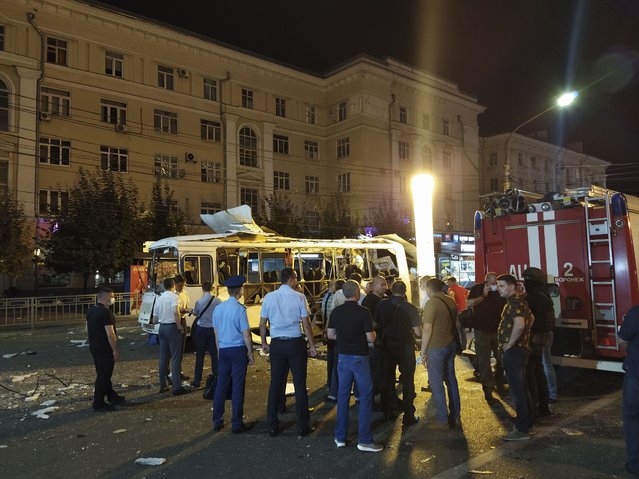 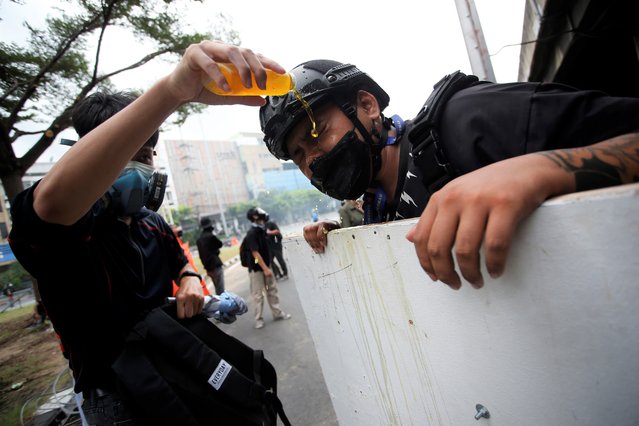 An anti-government protester has his eyes rinsed with water after tear gas was used during protest in Bangkok, Thailand, Friday, August 13, 2021. Protesters demanded the resignation of Prime Minister Prayuth Chan-ocha for what they say is his failure in handling the COVID-19 pandemic.(Photo by Anuthep Cheysakron/AP Photo) 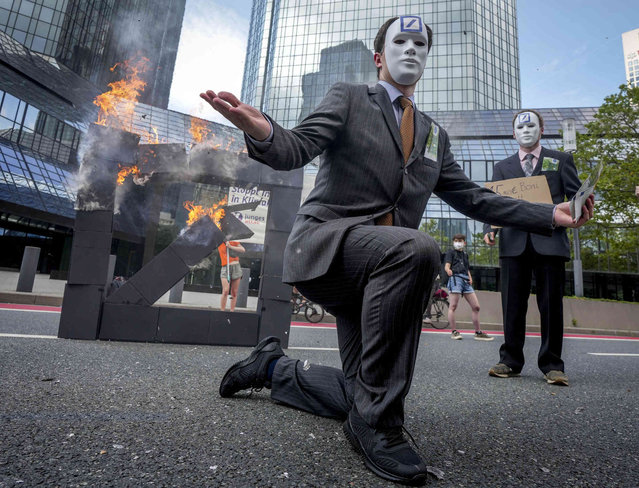 Members of Attac burn down a makeshift Deutsche Bank logo in front of the Deutsche Bank headquarters during the central climate strike of Fridays for Future in Frankfurt, Germany, Friday, August 13, 2021. Several thousand participants attended the protest against the financial sector in the banking city. (Photo by Michael Probst/AP Photo) 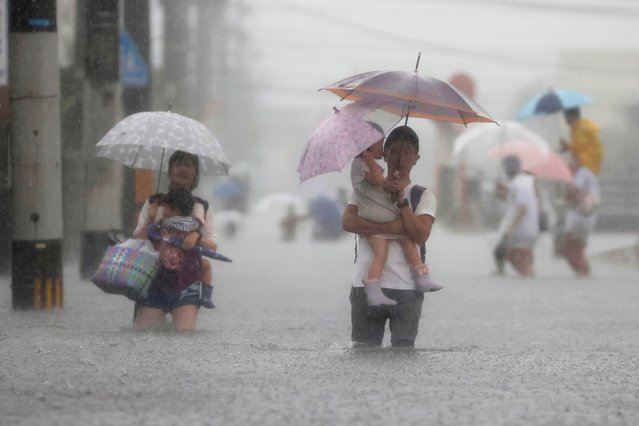 People wade through a road flooded by heavy rain in Kurume, Fukuoka prefecture, western Japan, Saturday, August 14, 2021. Torrential rain pounding southwestern Japan triggered a mudslide early Friday that swallowed some people and was threatening to cause flooding and more landslides in the region. (Photo by Kyodo News via AP Photo) 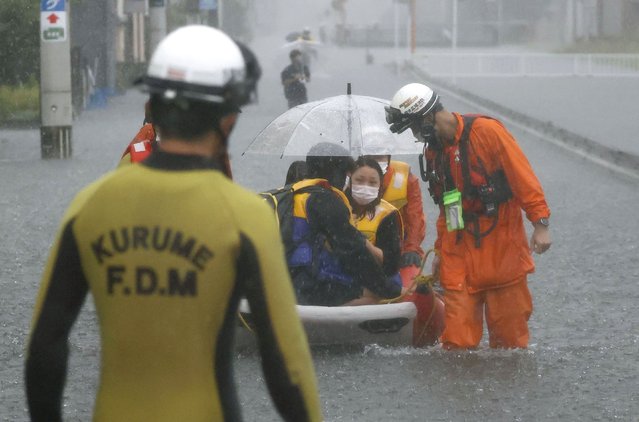 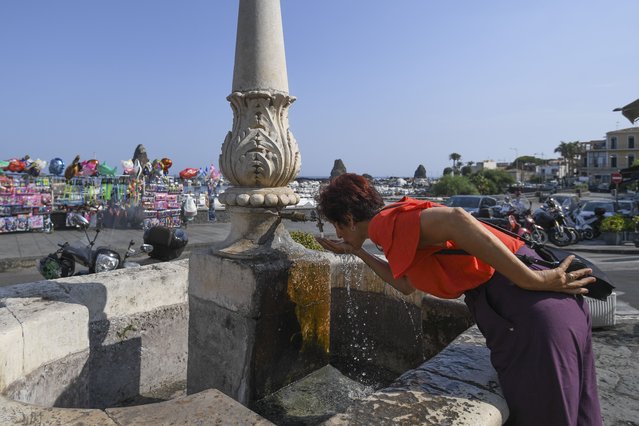 A woman refreshes herself at a fountain in Aci Trezza, near Catania, Sicily, Italy, Friday, August 13, 2021. Stifling heat is gripping much of Italy and Southern Europe, with peak temperatures reaching over 40 degrees Celsius (104 degrees Fahrenheit) and forecasters sayin worse is expected to come. (Photo by Salvatore Cavalli/AP Photo) 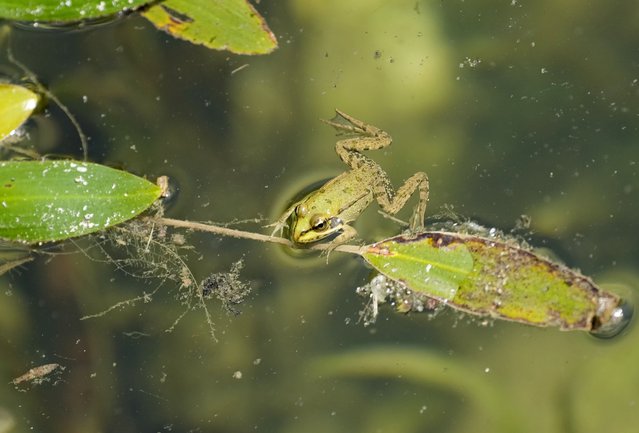 A frog swims in the small lake in the Topcider park in Belgrade, Serbia, Friday, August 13, 2021. More intense heat baked Italy, Spain and Portugal on Friday, with even higher temperatures looming in weekend forecasts. In Serbia, the army has deployed water tanks and authorities have appealed on the residents to avoid watering their gardens. (Photo by Darko Vojinovic/AP Photo) 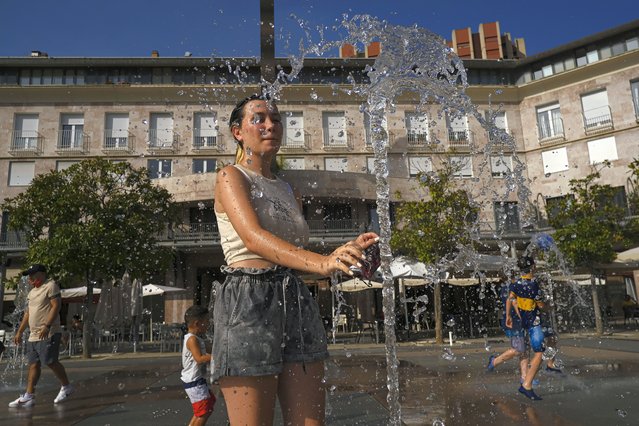 A woman cools off with the water to the fountain during a heatwave in Pamplona, northern Spain, Friday August 13, 2021. Stifling heat is gripping much of Spain and Southern Europe, and forecasters say worse is expected to come. (Photo by Alvaro Barrientos/AP Photo) 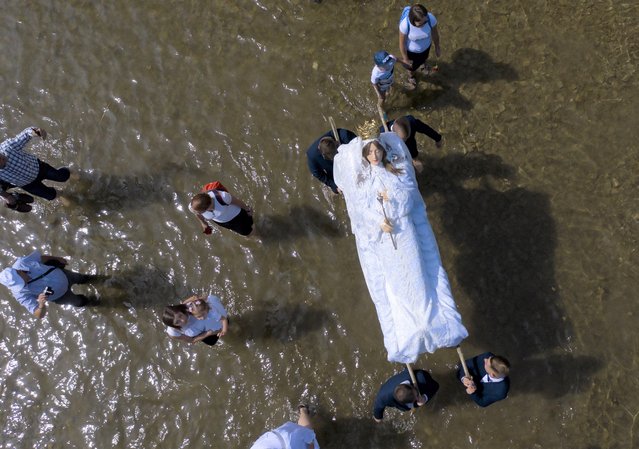 An aerial picture taken with a drone shows pilgrims from various parts of Poland during the church festival celebrating the Assumption of Virgin Mary, with plenary indulgence, in Kalwaria Paclawska, south-eastern Poland, 13 August 2021. One of the festival's highlights is the staging of the funeral of Virgin Mary. (Photo by Darek Delmanowicz/EPA/EFE) 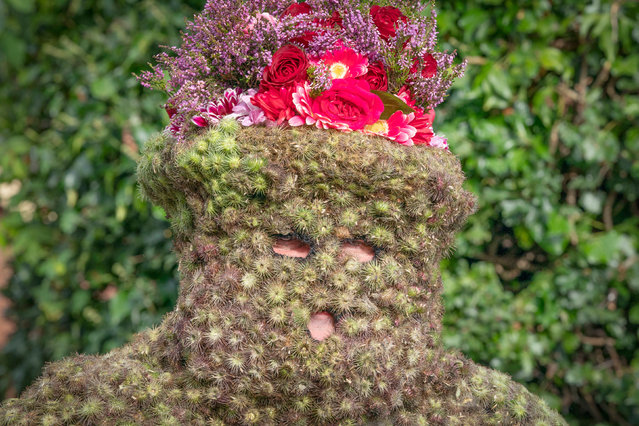 Burryman Andrew Taylor parades through the town of South Queensferry, near Edinburgh, Scotland, encased in burrs on August 13, 2021. The significance of the tradition has been lost over the years, but it is believed to bring good luck to the townspeople if they give him whisky offered through a straw. (Photo by Jane Barlow/PA Images via Getty Images)
Edit Del
14 Aug 2021 08:35:00, post received 0 comments
Publication archive:
←   →
Popular tags:
All tags
Last searches: