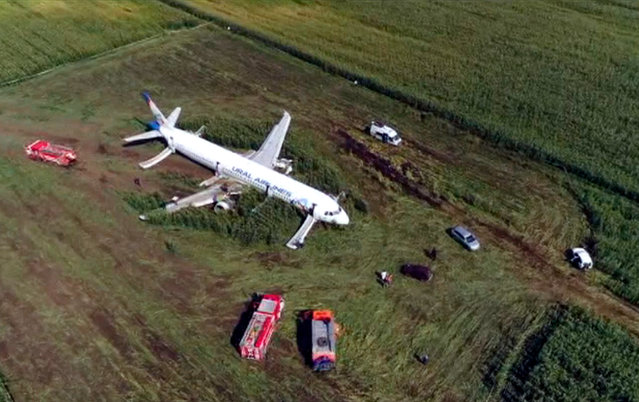 In this video grab provided by the RU-RTR Russian television, a Russian Ural Airlines' A321 plane is seen after an emergency landing in a cornfield near Ramenskoye, outside Moscow, Russia, Thursday, August 15, 2019. Russian Ural Airlines' A321, carrying 226 passengers and a crew of seven, collided with a flock of birds while taking off Thursday rfom Moscow's Zhukovsky airport. Russian health authorities said that 23 people, including five children, have been hospitalized with injuries. (Photo by RU-RTR Russian Television via AP Photo) 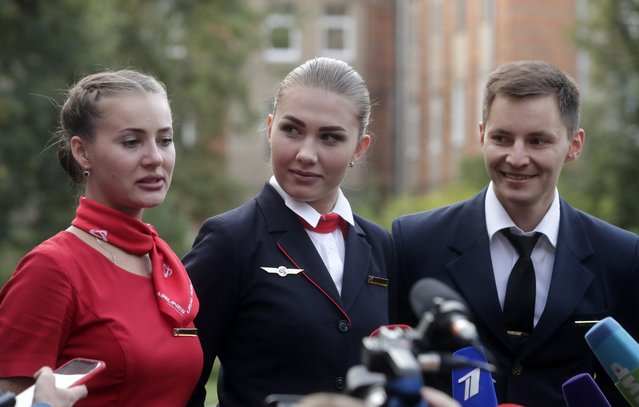 The crew of the Russian Ural Airlines' Airbus A321 plane during a press briefing following a hard landing near Zhukovsky International Airport due to an engine fire on August 15, 2019. (Photo by Mikhail Metzel/TASS) 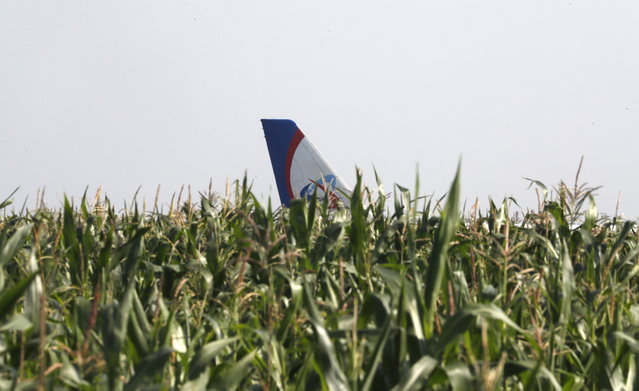 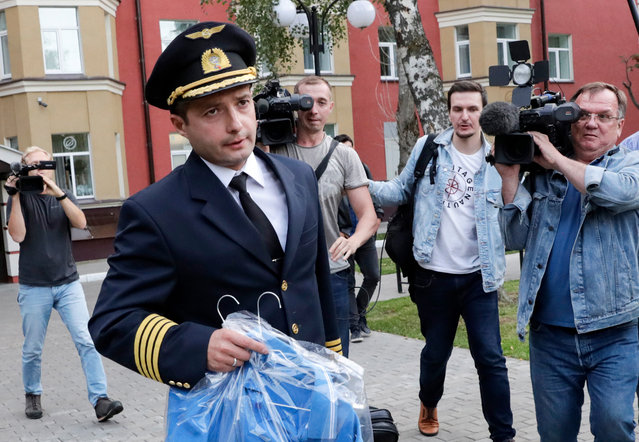 Damir Yusupov, 41, the captain of Ural Airlines A321, walks to attend a news conference in Ramenskoye, just outside Moscow, Russia, Thursday, August 15, 2019. The captain of a Russian passenger jet was hailed as a hero Thursday for landing his plane in a cornfield after it collided with a flock of gulls seconds after takeoff, causing both engines to malfunction. (Photo by Vladimir Shatilov/AP Photo) 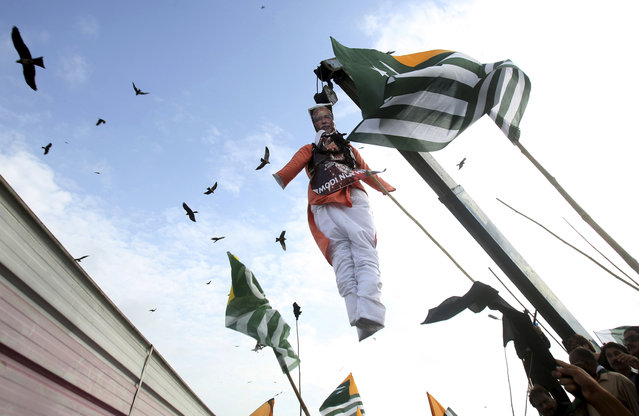 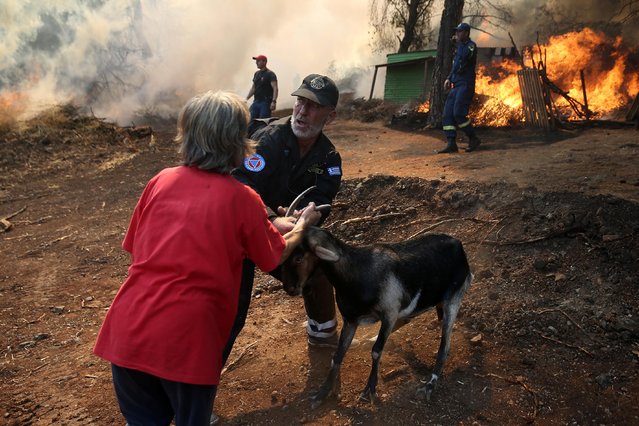 A firefighter removes a goat from a farm as a wildfire burns in the village of Makrimalli on the island of Evia, Greece, August 14, 2019. (Photo by Costas Baltas/Reuters) 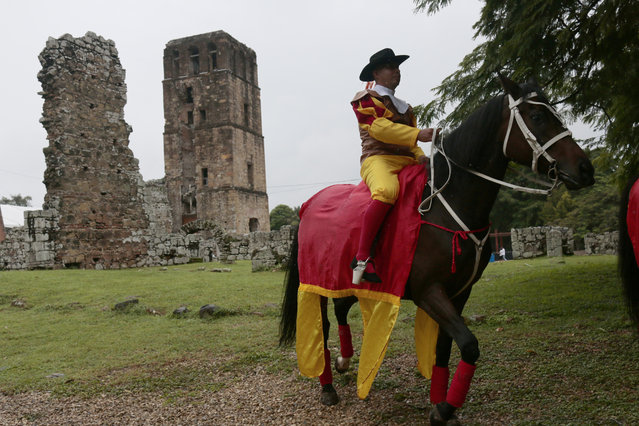 A man dressed as old colonial Spaniard rides a horse during the activities celebrating the 500 anniversary of the founding of Panama City, at the site of the ruins of Old Panama, Thursday, August 15, 2019. The city was founded on August 15, 1519, by Spanish conquistador Pedro Arias Davila. On Jan. 28 1671, the Welsh pirate Henry Morgan attacked the city and destroyed it. The attack caused the city to be rebuilt a few kilometers to the west on a new site. (Photo by Eric Batista/AP Photo) 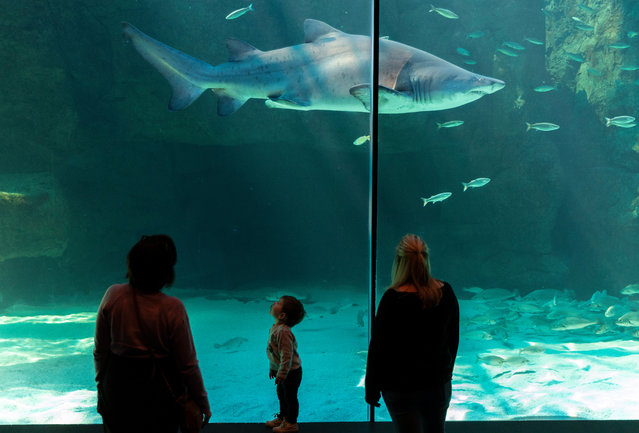 An Eagle Ray swims in the “Two Oceans Aquarium” in Cape Town, South Africa, 15 August 2019. The Two Oceans Aquarium has just become a member of the global World Association of Zoos and Aquariums (WAZA). The aim of WAZA is to promote animal welfare, nature conservation and environmental compatibility. Opened in 1995, the Two Oceans Aquarium is named after its location at the southern tip of the African continent, where the Indian and Atlantic Oceans meet. The aquarium shows the rich variety of marine life of the two oceans. (Photo by Nic Bothma/EPA/EFE) 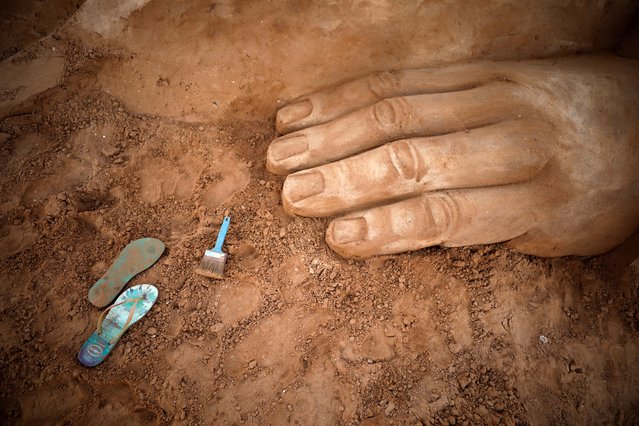 A detail from a work which is part of fairytale sand sculptures is seen during preparations for the opening of the International Sand Sculpture Festival in Ashkelon, Israel on August 7, 2019. (Photo by Amir Cohen/Reuters) 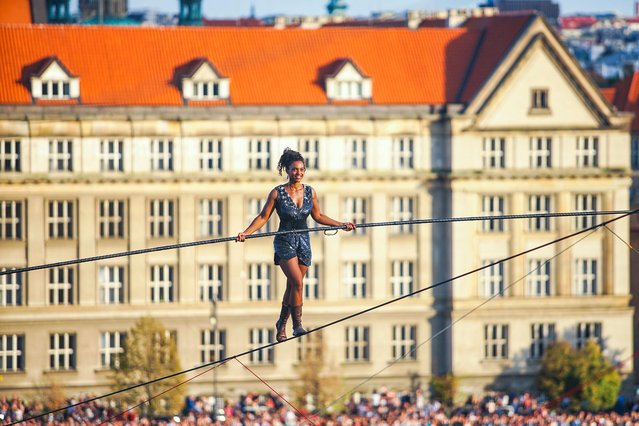 Tatiana-Mosio Bongonga from the French troup Cie Basinga Wednesday, August 14, 2019 crossed the Vltava River on a 350-meter-long rope at the height of 35 meters in Prague, Czechia. She crossed the river without any visible protection, using a four-metre-long balance pole weighing 12 kg. The whole journey took her about 40 minutes. (Photo by Xinhua News Agency/Rex Features/Shutterstock) 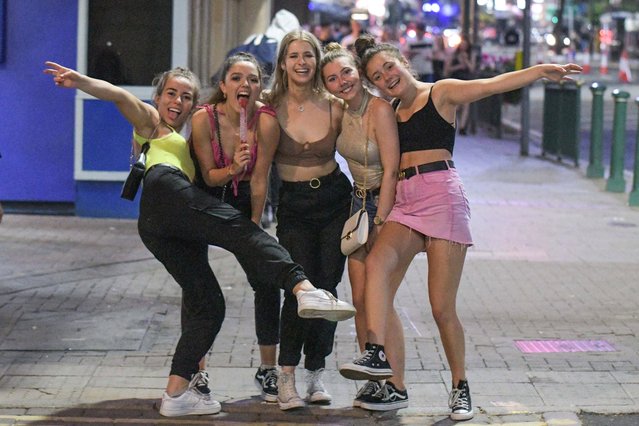 These girls are all smiles as they celebrate surviving A-level results day in Birmingham, England on August 15, 2019. The A Level is a subject-based qualification conferred as part of the General Certificate of Education, as well as a school leaving qualification offered by the educational bodies in the United Kingdom. (Photo by SnapperSK/SnapperMS)
Edit Del
17 Aug 2019 00:07:00, post received 0 comments
Publication archive:
←   →
Popular tags:
All tags
Last searches: