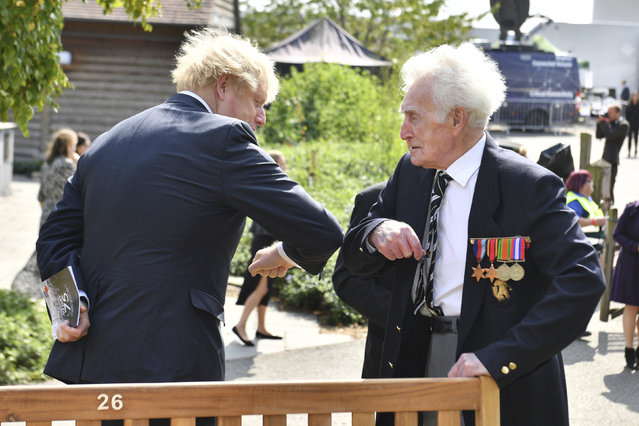 Britain's Prime Minister Boris Johnson greets veteran Bill Redston following the national service of remembrance marking the 75th anniversary of V-J Day at the National Memorial Arboretum in Alrewas, England, Saturday Aug. 15, 2020. Following the surrender of the Nazis on May 8, 1945, V-E Day, Allied troops carried on fighting the Japanese until an armistice was declared on August 15, 1945. (Photo by Anthony Devlin/PA Wire via AP Photo) 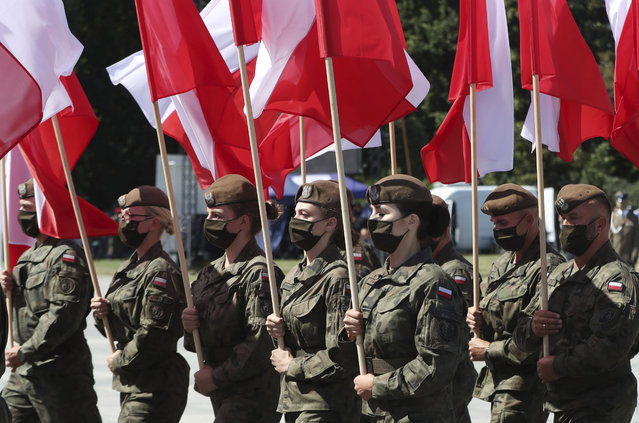 Polish soldiers hold national flags as Poland marks the centennial of the Battle of Warsaw, a Polish military victory in 2020 that stopped the Russian Bolshevik march toward the west, in Warsaw, Poland, Saturday August 15, 2020. U.S. Secretary of State Mike Pompeo attended as he wrapped up a visit to central Europe. (Photo by Czarek Sokolowski/AP Photo) 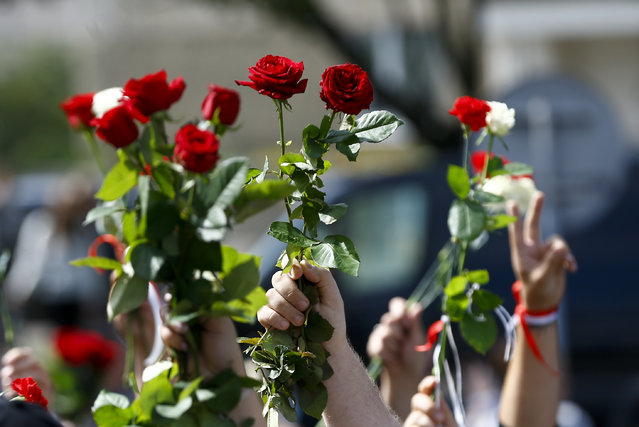 People wave flowers at the farewell hall during the funeral of Alexander Taraikovsky who died amid clashes protesting the election results, in Minsk, Belarus, Saturday, August 15, 2020. Taraikovsky died Monday as demonstrators roiled the streets of the capital Minsk, denouncing official figures showing that authoritarian President Alexander Lukashenko, in power since 1994, had won a sixth term in office. (Photo by Sergei Grits/AP Photo) 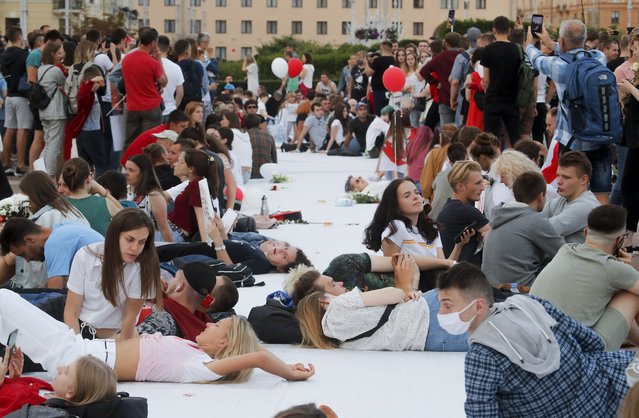 People sit on a white canvas in front of government building in Minsk, Belarus, Saturday, August 15, 2020. Tens of thousands of people have flooded the heart of the Belarus capital of Minsk in a show of anger over a brutal police crackdown this week on peaceful protesters that followed a disputed election. (Photo by Dmitri Lovetsky/AP Photo) 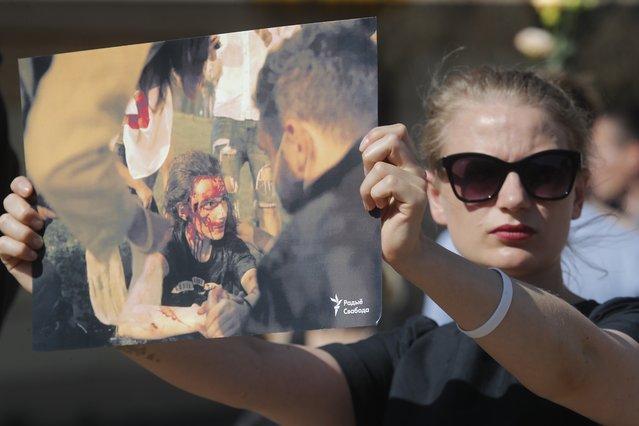 A woman holds a photo of a protester, beaten by police during a rally in Minsk, Belarus, Saturday, August 15, 2020. Thousands of demonstrators have gathered at the spot in Belarus' capital where a protester died in clashes with police, calling for authoritarian President Alexander Lukashenko to resign. (Photo by Dmitri Lovetsky/AP Photo) Pro-democracy students dance during a rally in Bangkok, Thailand, Sunday, August 16, 2020. Protesters have stepped up pressure on the government if it failed to meet their demands, which include holding of new elections, amending the constitution, and an end to intimidation of critics. (Photo by Sakchai Lalit/AP Photo) A pro-democracy student holds a poster during a rally in Bangkok, Thailand, Sunday, August 16, 2020. (Photo by Sakchai Lalit/AP Photo) A musician, wearing a protective face mask as a precaution against the spread of the new coronavirus, plays his cello outside the Pizzeria Zaza, in Mexico City, Saturday, August 15, 2020. The government of Mexico City has allowed bars to operate as restaurants that began Monday in order to reopen as part of an easing of the new coronavirus lockdown. (Photo by Marco Ugarte/AP Photo) 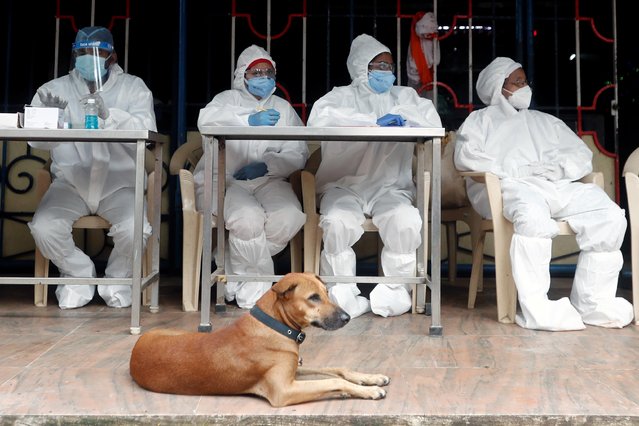 A dog lies down in front of health workers in personal protective equipment (PPE), as they wait for people during a check up campaign for the coronavirus disease (COVID-19) in Mumbai, India, August 15, 2020. (Photo by Francis Mascarenhas/Reuters) A pilgrim crawls in front of the Navy band outside the Holy Church of Panagia of Tinos, on the Aegean island of Tinos, Greece, on Saturday, August 15, 2020. For nearly 200 years, Greek Orthodox faithful have flocked to Tinos for the August 15 feast day of the Assumption of the Virgin Mary, the most revered religious holiday in the Orthodox calendar after Easter. But this year there was no procession, the ceremony – like so many lives across the globe – upended by the coronavirus pandemic. (Photo by Thanassis Stavrakis/AP Photo)
Edit Del
17 Aug 2020 00:07:00, post received 0 comments
Publication archive:
←   →
Popular tags:
All tags
Last searches: