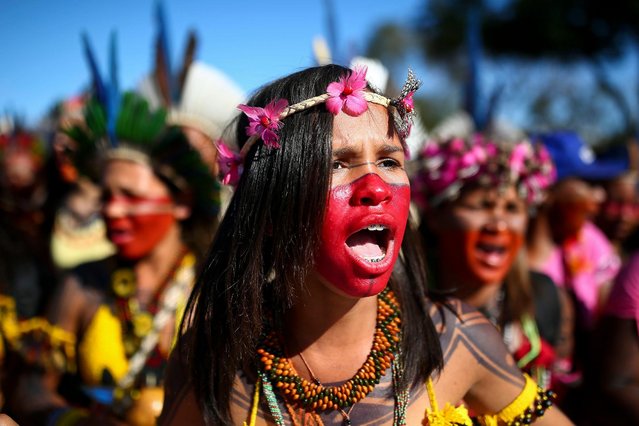 Brazilian indigenous women march towards the Ministry of Health office during a protest against budget cuts, in Brasilia on August 12, 2019. Indigenous women marched on Tuesday in Brasilia to claim their rights and to denounce the “dismantling” of the environmental and human rights policy by the government of Brazil's President Jair Bolsonaro. (Photo by Sergio Lima/AFP Photo) 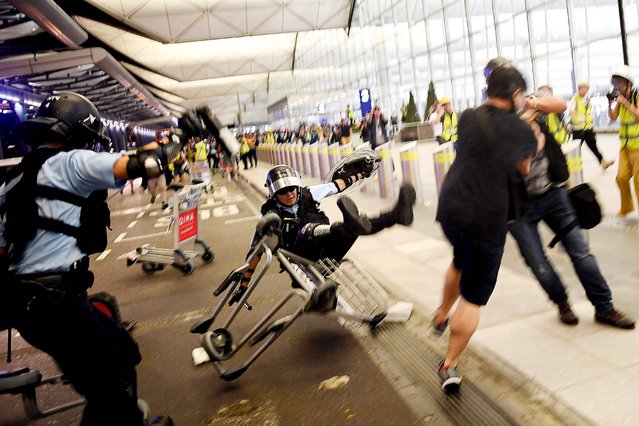 A Hong Kong policeman (C) falls backwards as they scuffle with pro-democracy protesters during ongoing demonstrations at Hong Kong's International Airport on August 13, 2019. Hundreds of flights were cancelled or suspended at Hong Kong's airport on August 13 as pro-democracy protesters staged a second disruptive sit-in at the sprawling complex, defying warnings from the city's leader who said they were heading down a “path of no return”. (Photo by Manan Vatsyayana/AFP Photo) 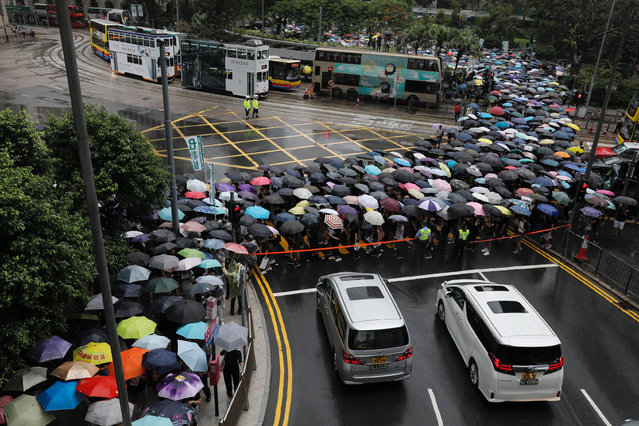 Pro-democracy protesters march organized by teachers in Hong Kong Saturday, August 17, 2019. Members of China's paramilitary People's Armed Police marched and practiced crowd control tactics at a sports complex in Shenzhen across from Hong Kong in what some interpreted as a threat against pro-democracy protesters in the semi-autonomous territory. (Photo by Vincent Yu/AP Photo) 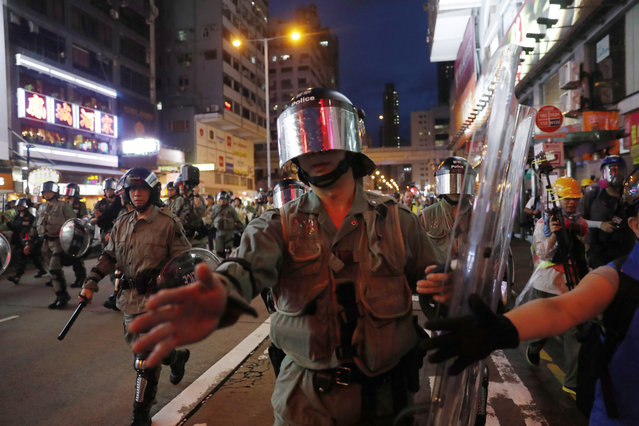 Riot police advance to disperse anti-government protesters gather outside the Mong Kok Police station after a march themed “Recover Hung Hom” in Mong Kok, Hong Kong, China, 17 August 2019. Hung Hom and To Kwa Wan are popular areas for low-cost travel tours from mainland China. The city braced itself for another weekend of protests demanding the full withdrawal of a now-suspended extradition bill as well as the appointment of a judge-led independent inquiry into police use of force on protesters since June. (Photo by Roman Pilipey/EPA/EFE) 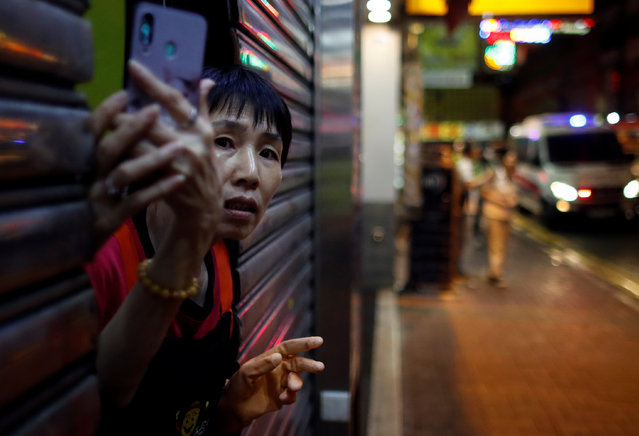 Locals react during the “Reclaim Hung Hom and To Kwa Wan, Restore Tranquility to Our Homeland” demonstration against the extradition bill, in Hong Kong, China on August 17, 2019. (Photo by Kim Hong-Ji/Reuters) 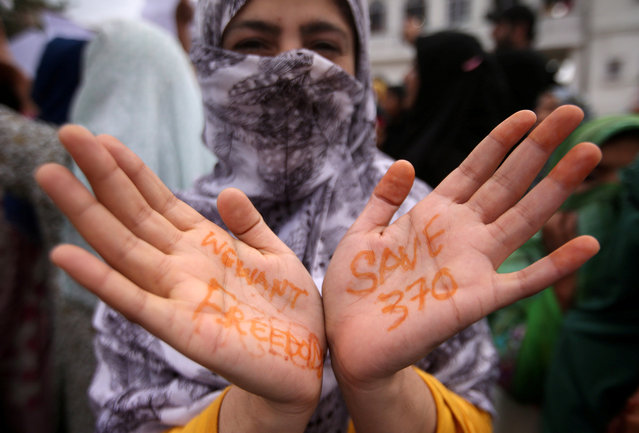 A Kashmiri woman shows her hands with messages at a protest after Friday prayers during restrictions after the Indian government scrapped the special constitutional status for Kashmir, in Srinagar on August 16, 2019. (Photo by Danish Ismail/Reuters) 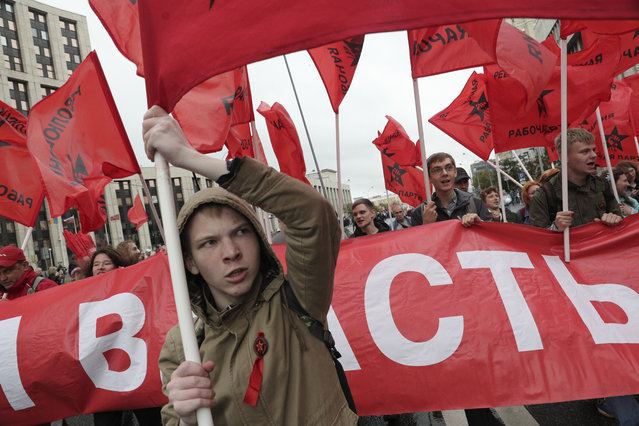 Communist party supporters wave red flags during a protest in the center of Moscow, Russia, Saturday, August 17, 2019. People rallied Saturday against the exclusion of some city council candidates from Moscow's upcoming election. (Photo by AP Photo/Stringer) 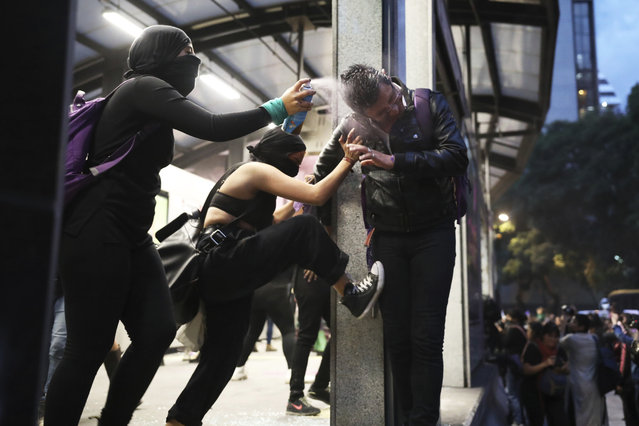 Two women assault a commuter, one spraying him in the face with paint another kicking him, at a bus station, during a protest sparked by a string of alleged sexual attacks by police officers, in Mexico City, Friday, August 16, 2019. On Friday, hundreds of women demonstrated largely peacefully in downtown Mexico City with pink spray paint and smoke. But some protesters trashed the nearby bus station. This week, an auxiliary policeman was held for trial on charges he raped a young female employee at a city museum. (Photo by Emilio Espejel/AP Photo) 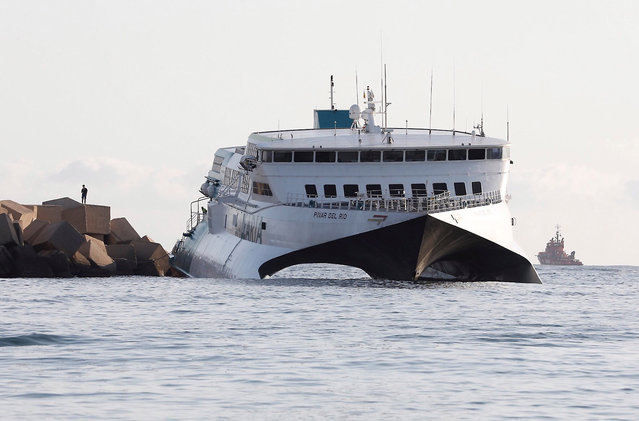 A view of the Balearia company's ferry, Pinar Del Rio, in Denia, Alicante, Spain 17 August 2019 after it ran aground on the breakwater of the port in Denia, on 16 August 2019. A total of 393 passengers where safely evacuated without any reported casualties. (Photo by Juan Carlos Cardenas/EPA/EFE) 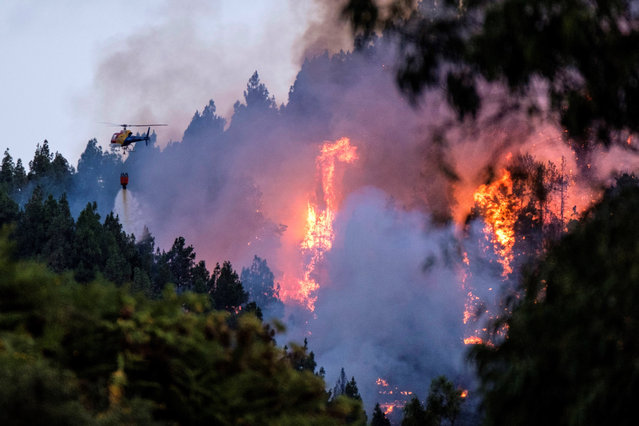 A firefighting helicopter spreads water over a forest fire broke up in the village of Valleseco, Gran Canaria island, Spain, 17 August 2019. Three roads had to be closed due to the fire. The island is on orange alert for hot temperatures reaching up to 37 Celsius degrees. (Photo by Angel Medina G./EPA/EFE) 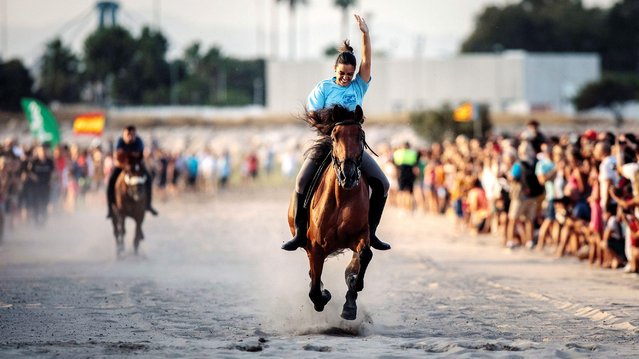 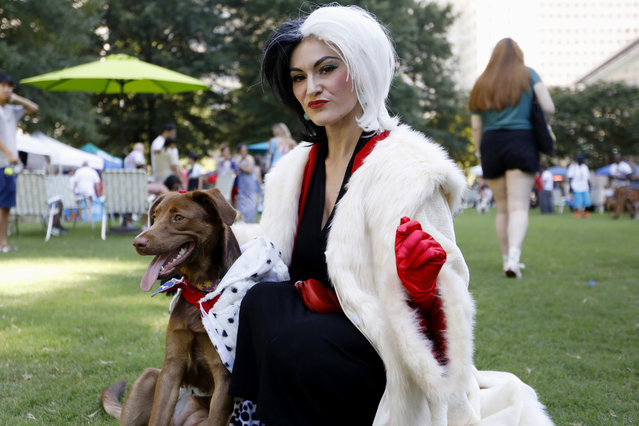 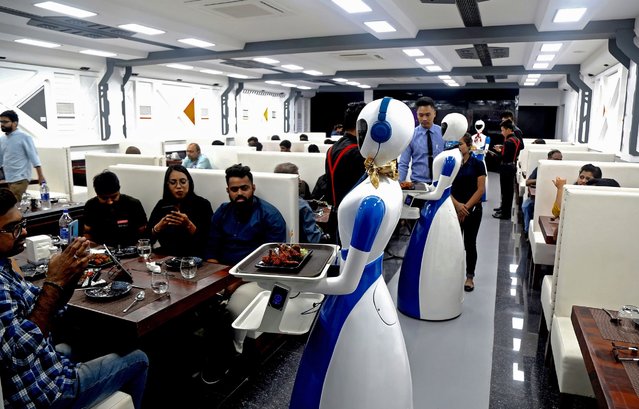 Robots serve trays with food to customers waiting at the Robot theme restaurant in Bangalore, India, 17 August 2019. Six robots are deployed as waiters at the the robot-themed Robot restaurant where each table is equipped with a tablet to place one's order. (Photo by Jagadeesh N.V./EPA/EFE) 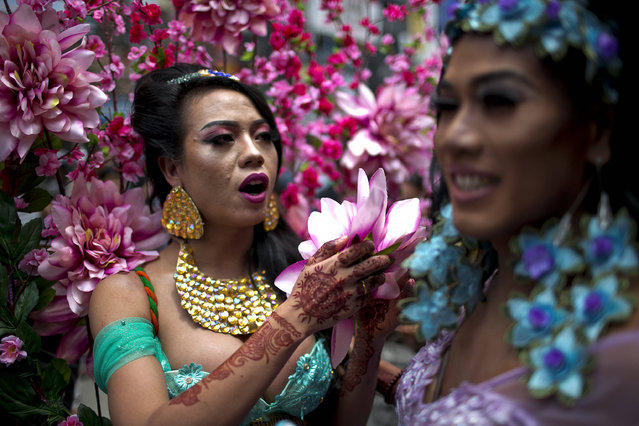