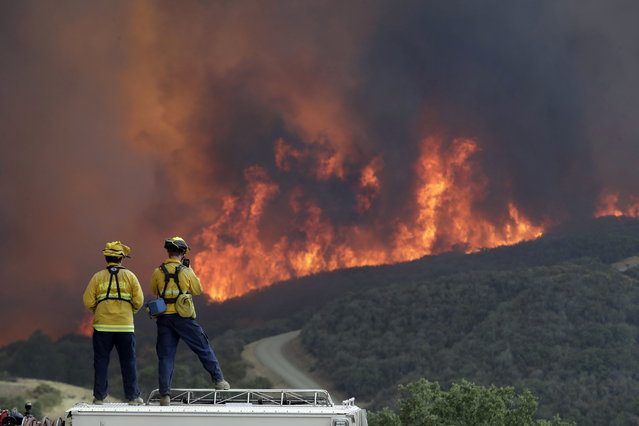 A fire crew from San Luis Obispo County keeps an eye on an advancing wildfire from the perimeter of a residence Tuesday, July 31, 2018, in Lakeport, Calif. (Photo by Marcio Jose Sanchez/AP Photo) 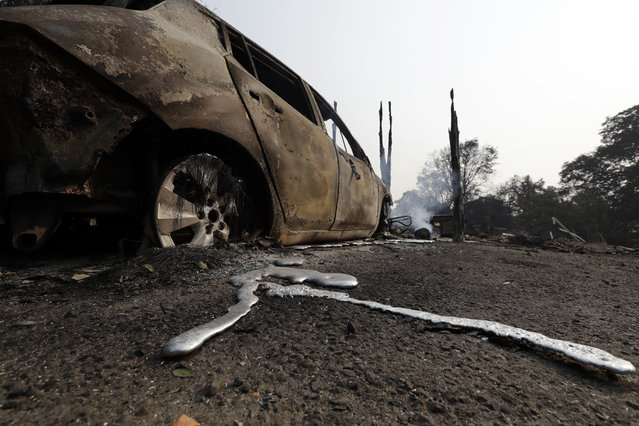 Melted metal is seen under a wildfire- damaged car Tuesday, July 31, 2018, in Lakeport, Calif. Battalion Chief John Messina said Tuesday fire crews slowed the spread of one of the blazes into towns near Clear Lake, including Lakeport, a city of 5,000. He says the fire instead spread into the Mendocino National Forest. (Photo by Marcio Jose Sanchez/AP Photo) 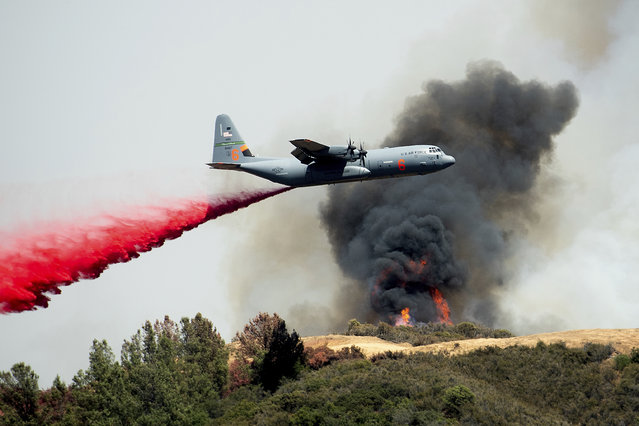 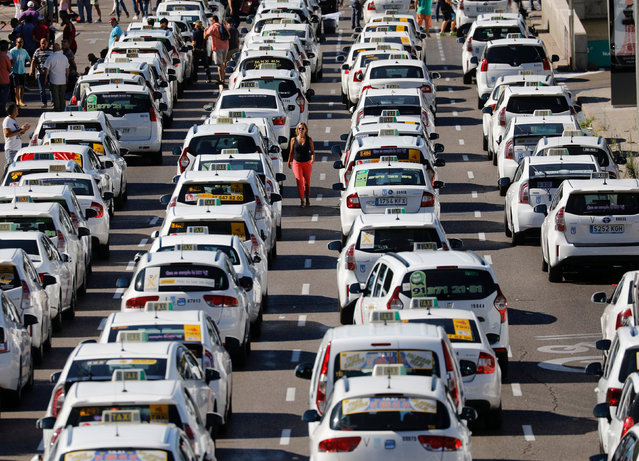 Taxis block a section of the main avenue Paseo de la Castellana during an indefinite strike against what they say is unfair competition from ride-hailing and car-sharing services such as Uber and Cabify, in Madrid, Spain, July 31, 2018. (Photo by Paul Hanna/Reuters) 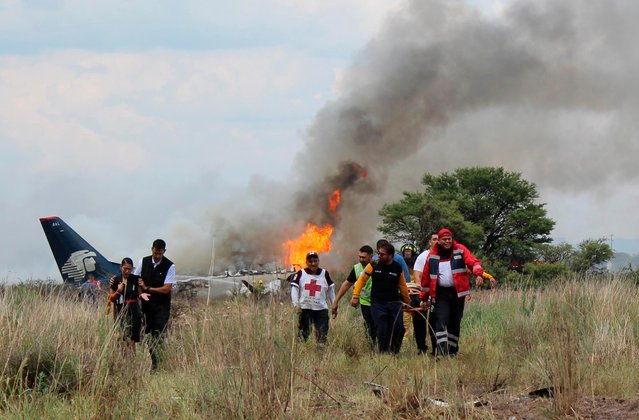 In this photo released by Red Cross Durango communications office, Red Cross workers and rescue workers carry an injured person on a stretcher, right, as airline workers, left, walk away from the site where an Aeromexico airliner crashed in a field near the airport in Durango, Mexico, Tuesday, July 31, 2018. The jetliner crashed while taking off during a severe storm, smacking down in a field nearly intact then catching fire, and officials said it appeared everyone on board escaped the flames. (Photo by Red Cross Durango via AP Photo) 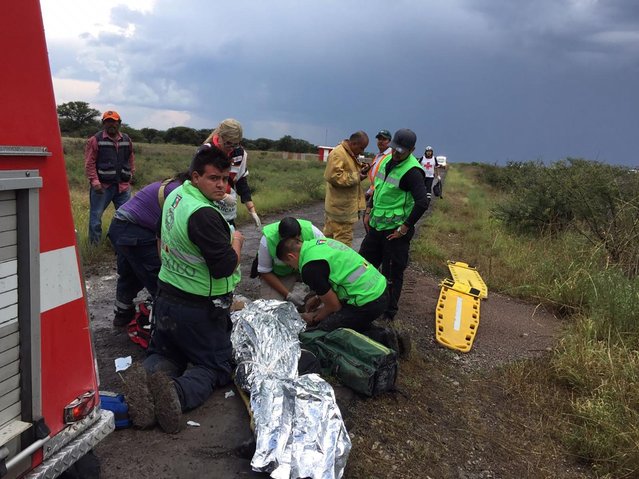 A handout photo made available by the Civil Protection State Coordination (CPCE) shows emergency personnel at the site where an Aeromexico plane crashed, helping passengers, in Durango, Mexico, 31 July 2018. 80 people were reported to be on board. No official casualty report has been released. (Photo by EPA/EFE/Civil Protection State Coordination) 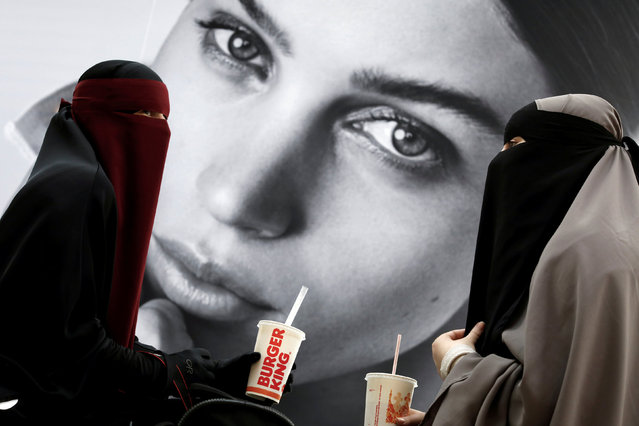 Ayah (L), 37, and Aisha, 18, wearers of the niqab and members of the group Kvinder I Dialog (Women In Dialogue), sit in a shopping center near Copenhagen, Denmark, July 19, 2018. (Photo by Andrew Kelly/Reuters) 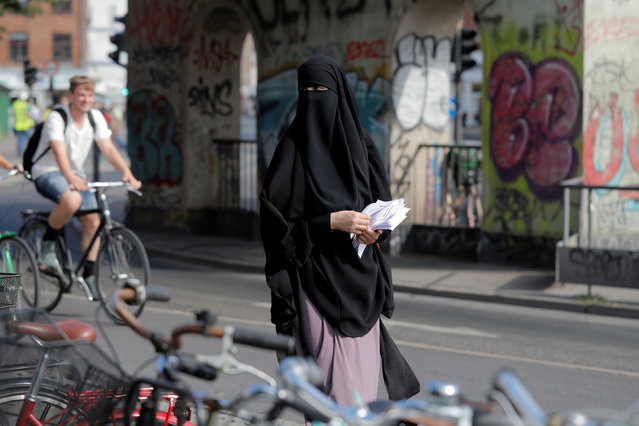 Alaa, 22, member of the group Kvinder I Dialog and wearer of the Islamic clothing the niqab, passes out flyers to promote their group's protest against the Danish face veil ban which will come into effect August 1, 2018, in Copenhagen, Denmark, July 31, 2018. (Photo by Andrew Kelly/Reuters) 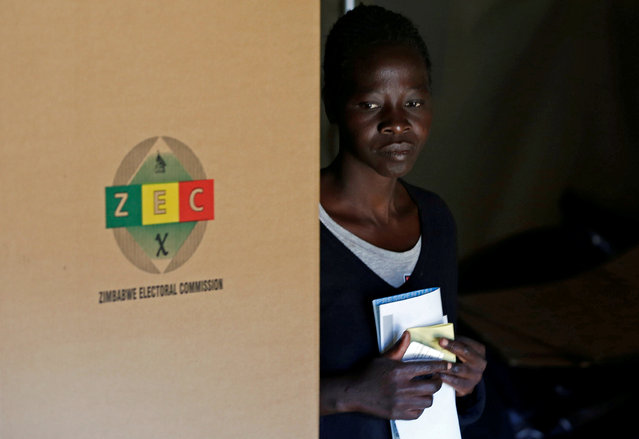 A Zimbabwean voter arrives to cast her ballot in the country's general elections in Harare, Zimbabwe, July 30, 2018. (Photo by Siphiwe Sibeko/Reuters) 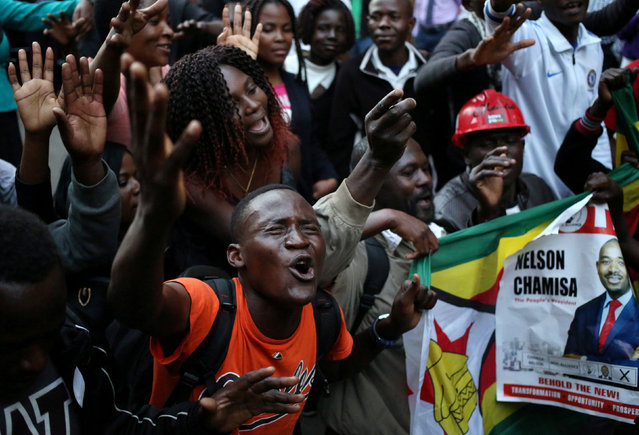 Supporters of the opposition Movement for Democratic Change party (MDC) of Nelson Chamisa, sing and dance in the street outside the party's headquarters following general elections in Harare, Zimbabwe, July 31, 2018. (Photo by Siphiwe Sibeko/Reuters) 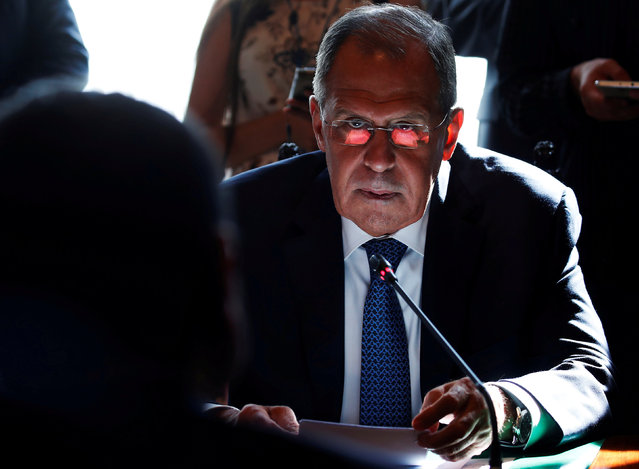 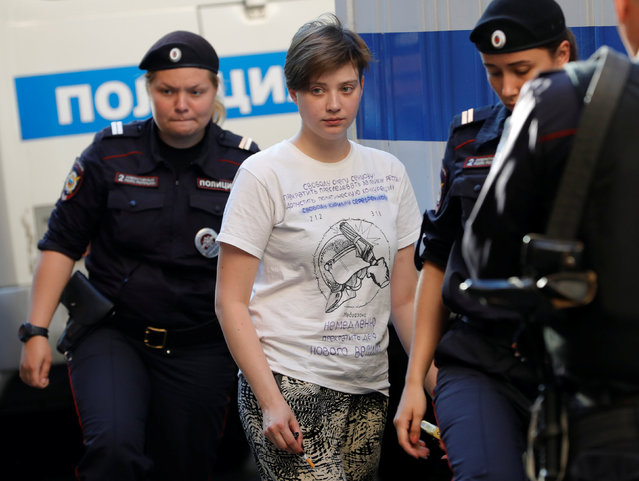 Olga Pakhtusova, one of four members of Russia's p*ssy Riot protest group who were jailed for 15 days for staging a pitch invasion during the football World Cup final and were detained again after their release on July 30, is escorted by police officers outside a court building in Moscow, Russia July 31, 2018. (Photo by Tatyana Makeyeva/Reuters) 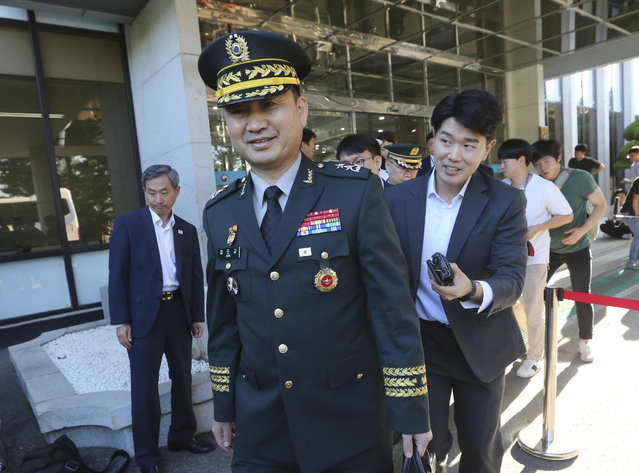 South Korean Maj. Gen. Kim Do-gyun leaves for the border village of Panmunjom to attend a joint meeting between North and South Korea to discuss how to ease military confrontations, at the Office of the South Korea-North Korea Dialogue in Seoul, South Korea, Tuesday, July 31, 2018. (Photo by Ahn Young-joon/AP Photo) 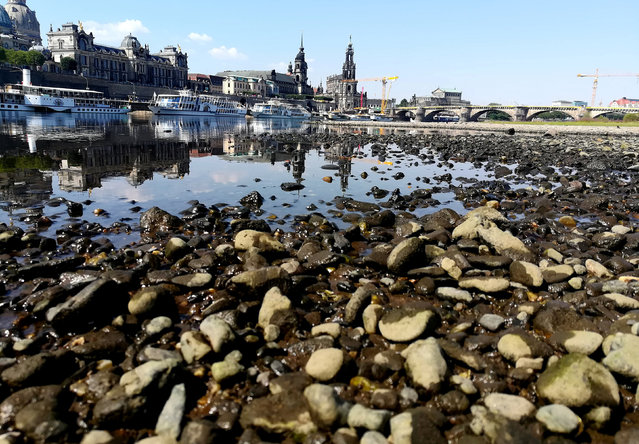 Sightseeing boats sit at the Elbe river in Dresden after water levels dropped to an extreme low this summer, Germany, July 31, 2018. (Photo by Fanny Brodersen/Reuters) 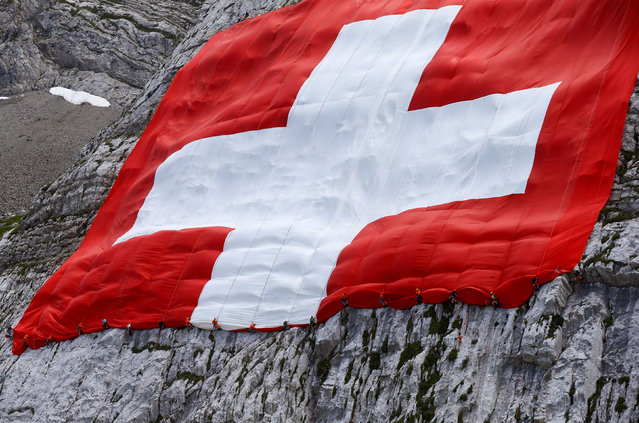 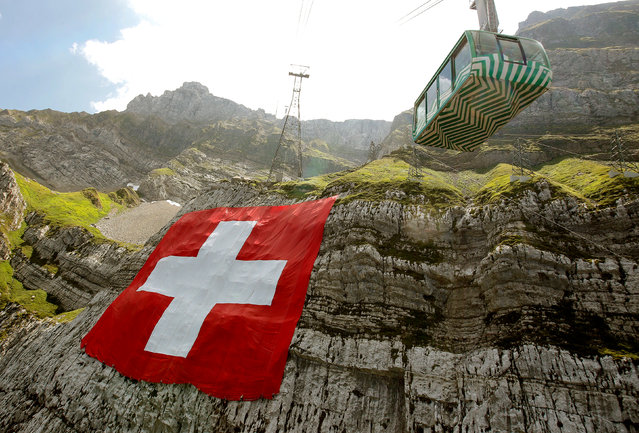 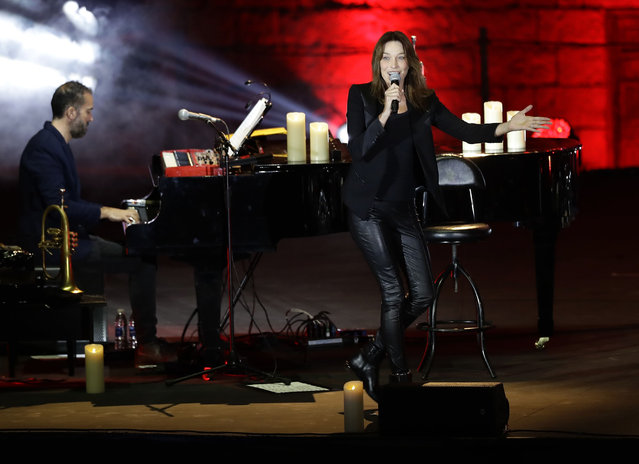 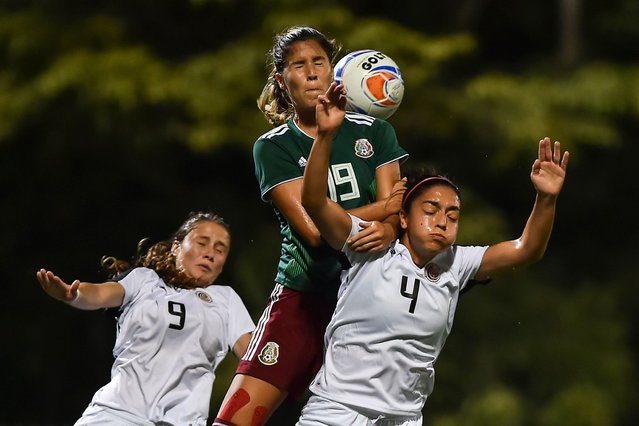 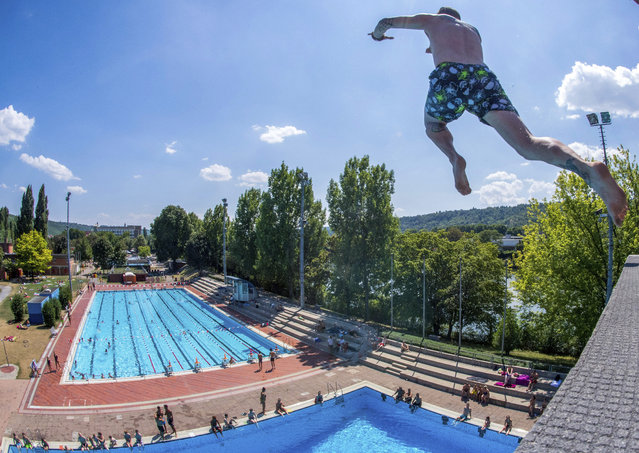