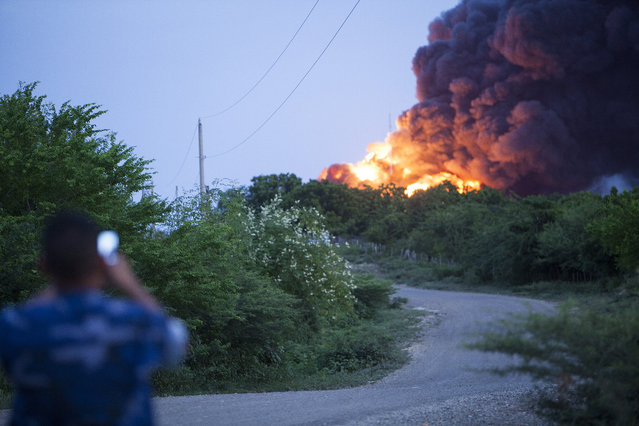 View of the explosion of a second fuel storage tank at the Puma Energy plant in Puerto Sandino, 70 km northwest of Managua, on August 18, 2016. The fire started on the eve, after a tank with a storage capacity of 144,000 barrels of fuel exploded in the afternoon. (Photo by Alfredo Zuniga/AFP Photo) 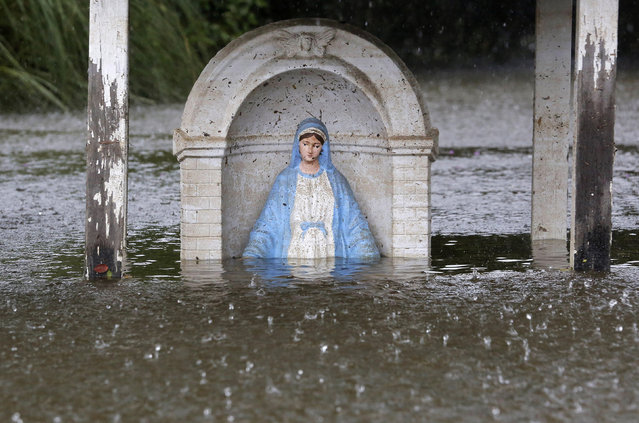 A statue of the Virgin Mary is seen partially submerged in flood water as it rains in Sorrento, Louisiana, U.S., August 20, 2016. (Photo by Jonathan Bachman/Reuters) 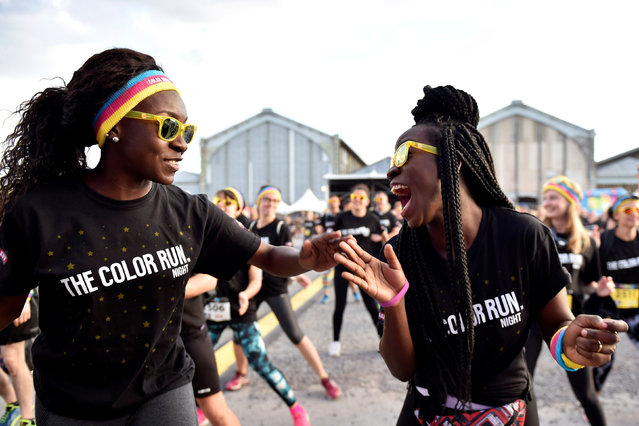 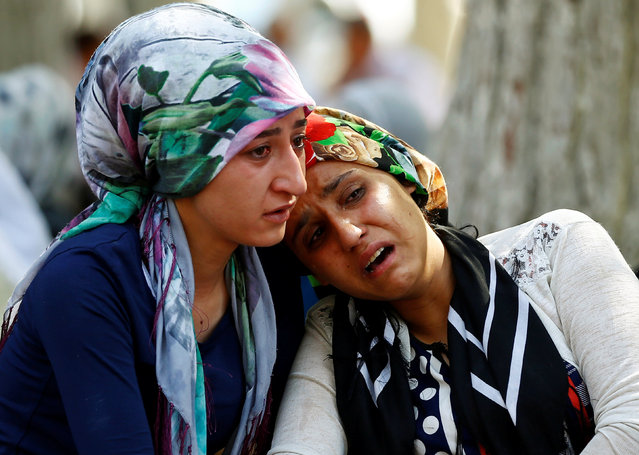 Women mourn as they wait in front of a hospital morgue in the Turkish city of Gaziantep, after a suspected bomber targeted a wedding celebration in the city, Turkey, August 21, 2016. (Photo by Osman Orsal/Reuters) 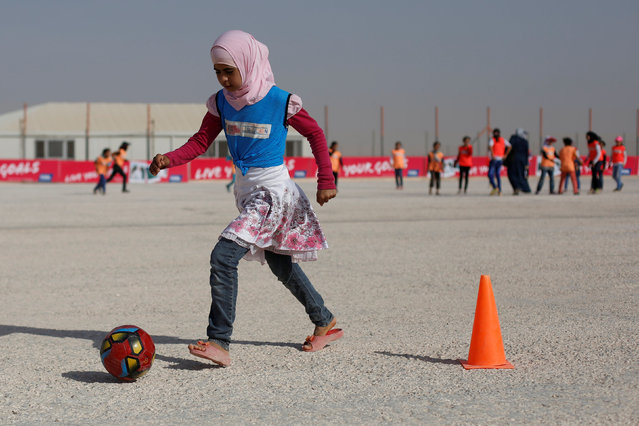 Syrian refugee girls play football before the U-17 WomenÕs World Cup Trophy as it is toured around at the Al Zaatri refugee camp in the Jordanian city of Mafraq, near the border with Syria, August 21, 2016. (Photo by Muhammad Hamed/Reuters) 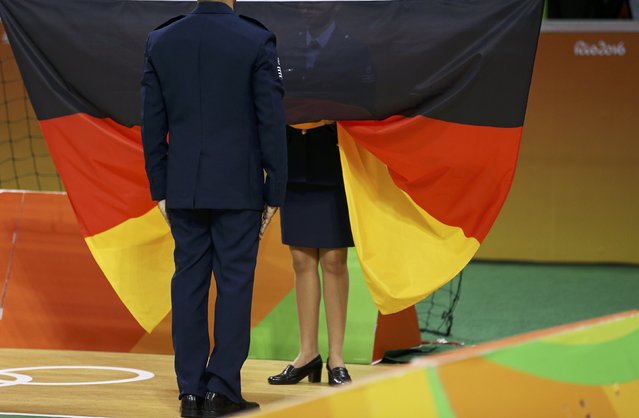 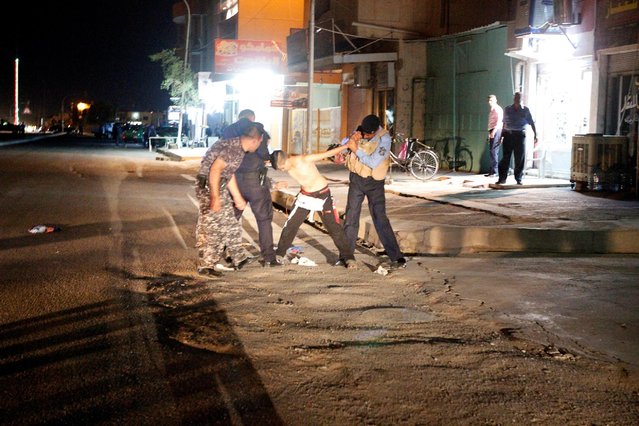 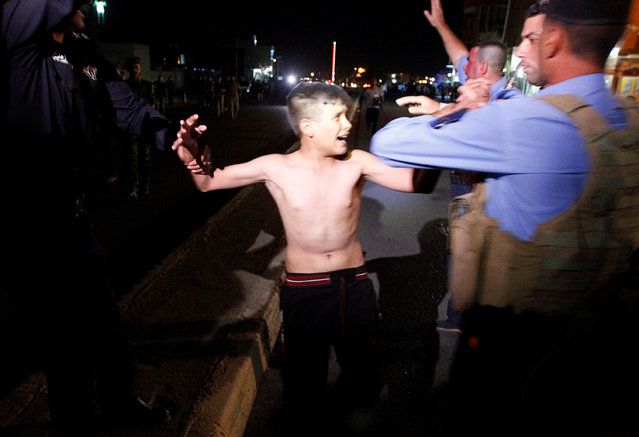 Iraqi security forces detain a boy after removing a suicide vest from him in Kirkuk, Iraq, August 21, 2016. (Photo by Ako Rasheed/Reuters) 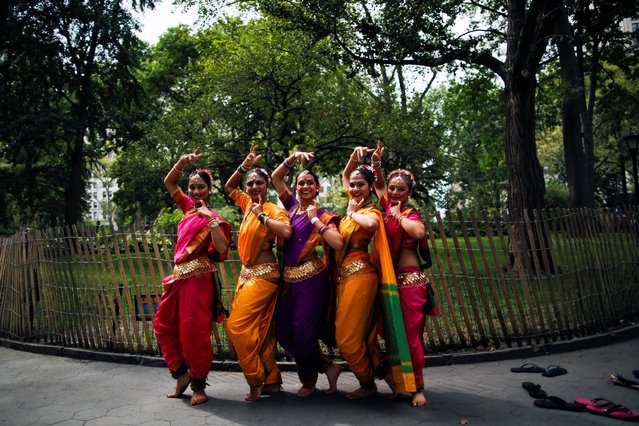 Women pose for a picture as they take part in the annual India Day Parade in Manhattan, New York, U.S., August 21, 2016. (Photo by Eduardo Munoz/Reuters) 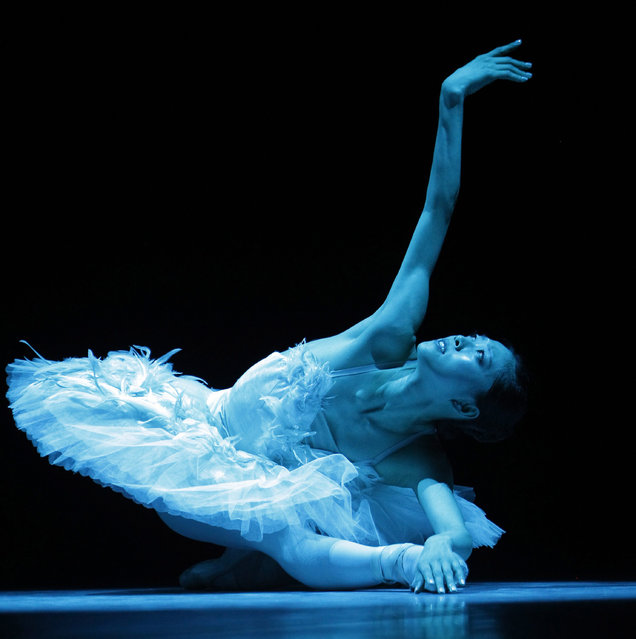 Misa Kuranaga of Japan performs during a rehearsal for the “Ballet Royalty” gala at the Great Theatre in Havana, Cuba, 20 August 2016. (Photo by Ernesto Mastrascusa/EPA) 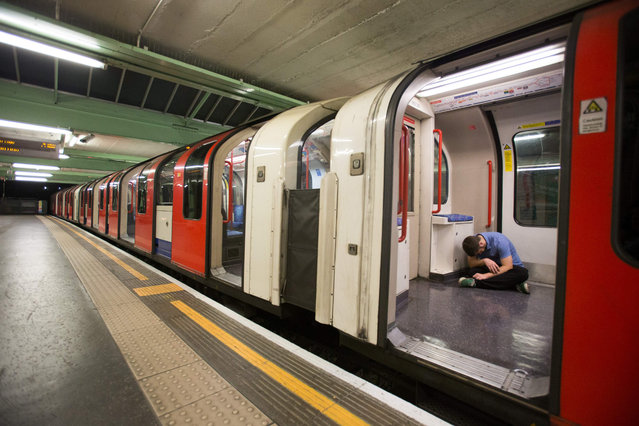 A man sleeps inside a London Underground train in the early hours of August 20, 2016 on the night of the launch of the 24-hour night tube service. The Night Tube – a new service that will see the Victoria and Central lines run all night on Fridays and Saturdays was launched overnight Friday. It is expected the night tube will transport about 200,000 people between now and the end of the year. (Photo by Daniel Leal-Olivas/AFP Photo) 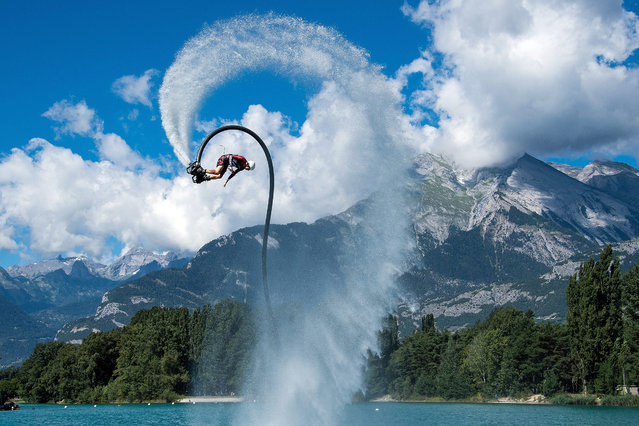 A man rides a flyboard over an artificial small lake at Sion, Switzerland, 21 August 2016. (Photo by Olivier Maire/EPA) 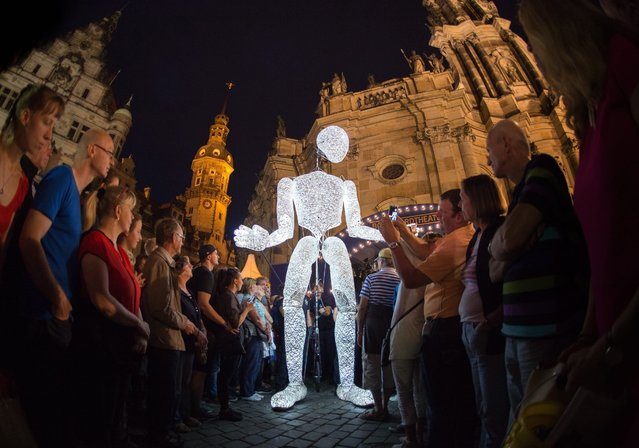 A marionette called “Dundu”, which is handled by five puppet players and is glowing by 250 LED lights, is moved through a crowd of people gathering on the Castle Square in Dresden, Germany, late 20 August 2016, on the occasion of the city's “Stadtfest” festival. (Photo by Arno Burgi/EPA) 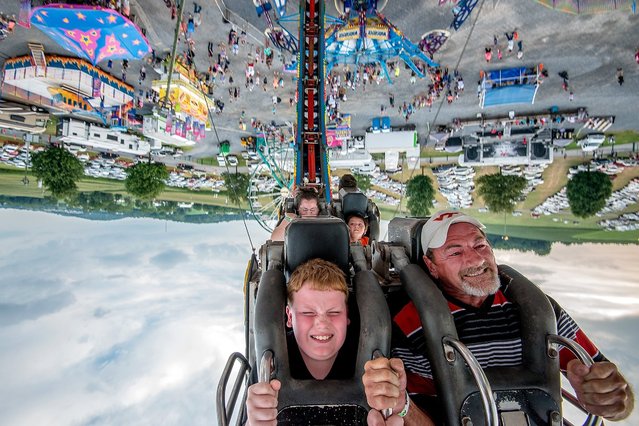 Isaiah Burroughs, 9, of Bridgewater, Va., and his grandfather Junior Knight, of Elkton, Va., ride “The Fireball” at the Rockingham County Fair on Friday, August 19, 2016, in Harrisonburg, Va. (Photo by Austin Bachand/Daily News-Record via AP Photo) 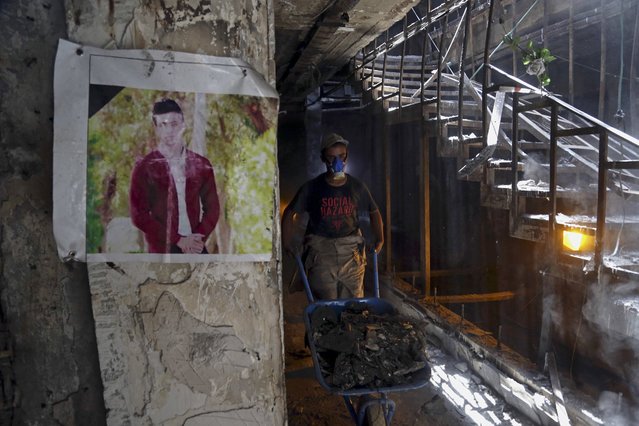 A municipal worker passes by a poster of a bomb victim during the cleaning process at the site of a deadly Islamic State group-claimed mall bombing in the Karradah neighborhood of central Baghdad, Iraq, Sunday, August 21, 2016. The scene of the blast that ultimately claimed the lives of nearly 300 people, according to the ministry of health, sat as a memorial to the dead for weeks after the attack. The July 3 attack was the single deadliest bombing in Baghdad since the 2003 toppling of Saddam Hussein and it fueled anger toward the Iraqi government over the lack of security in the capital. (Photo by Khalid Mohammed/AP Photo) 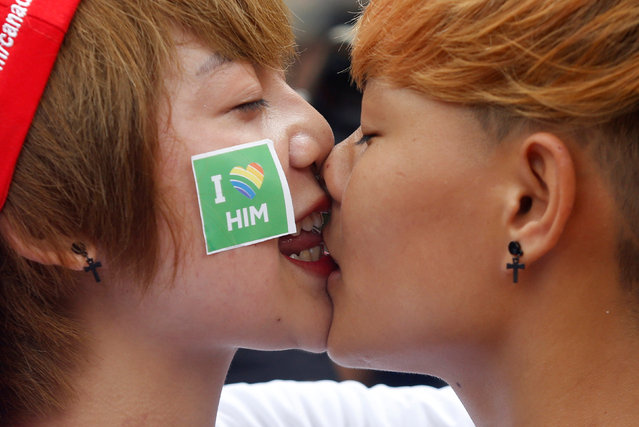 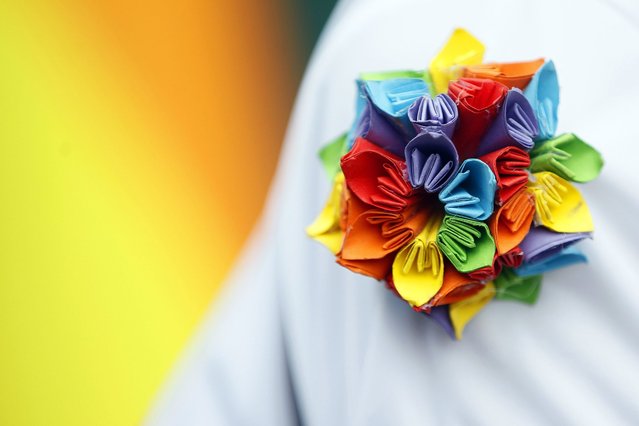 A close up photo of a rainbow flower during the fifth Viet Pride parade at a street in Hanoi, Vietnam, 21 August 2016. Hundreds took part in a colorful bicycle parade through the centre of Hanoi Sunday morning, marking the fifth annual Viet Pride, the country's version of Gay Pride. The parade is a part of various events of the Viet Pride Hanoi 2016 Week held from 17 to 21 August 2016. (Photo by Luong Thai Linh/EPA) 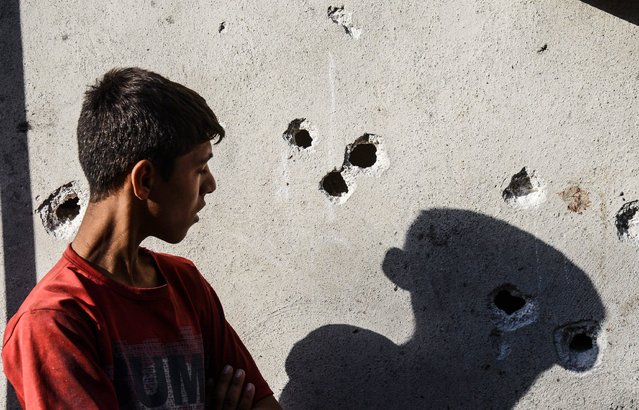 A boy stands near impacts of projectile on a wall near the explosion scene following a late night attack on a wedding party that left at least 30 dead in Gaziantep in southeastern Turkey near the Syrian border on August 21, 2016. Turkish President Recep Tayyip Erdogan on Sunday said the Islamic State (IS) group was the "likely erpetrator" of the bomb attack. rdogan said in a written statement that there was “no difference” between the group of US-based preacher Fethullah Gulen who he blames for a failed July 15 coup bid, the outlawed Kurdistan Workers Party (PKK) “and Daesh (IS), the likely perpetrator of the attack in Gaziantep”. (Photo by Ilyas Akengin/AFP Photo) 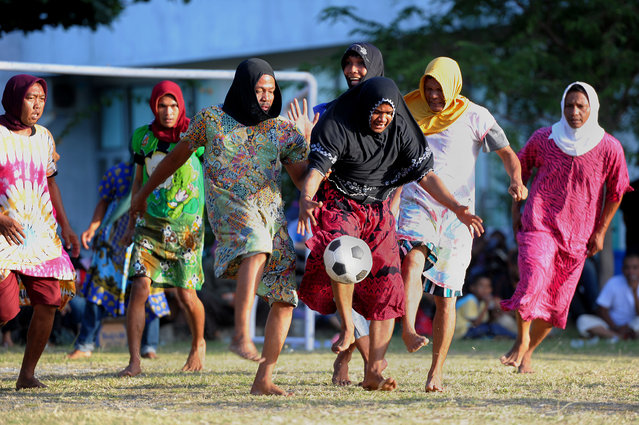 In this photograph taken on August 20, 2016, Acehnese men, dressed in woman's clothing for fooling around, play a game of football to mark the 71st Indonesian Independence Day in Banda Aceh. Indonesia celebrated its 71st Independence Day by holding many traditional and unique games, including men playing football in women's clothing as their obstacle. (Photo by Chaideer Mahyuddin/AFP Photo) 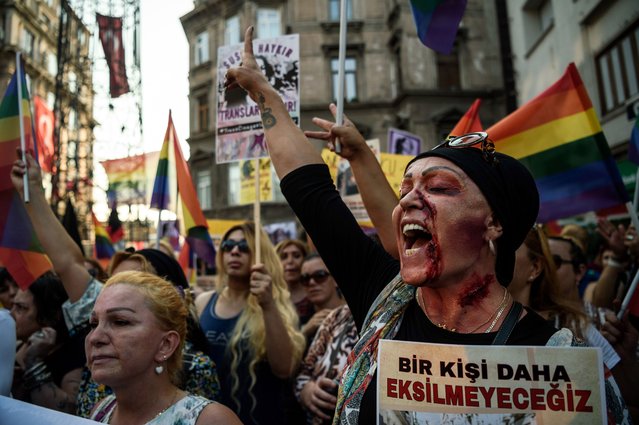 A LGBT member with make up on her face shouts slogans and gestures on August 21,2016 in Istanbul during a demonstration for the murdering of transgender activist Hande Kader, a 22-year-old transgender who was mutilated, burnt and murdered in Istanbul on last week. Nearly 200 militants of the transgender cause demonstrate in Istanbul to ask for justice after the murder of the transgender activist Hande Kader. It is the the second murder that horrified the Turkisk LGBT community after the killing, on August 4, 2016, of a Syrian refugee who was found dead with his body mutilated. (Photo by Ozan Kose/AFP Photo) 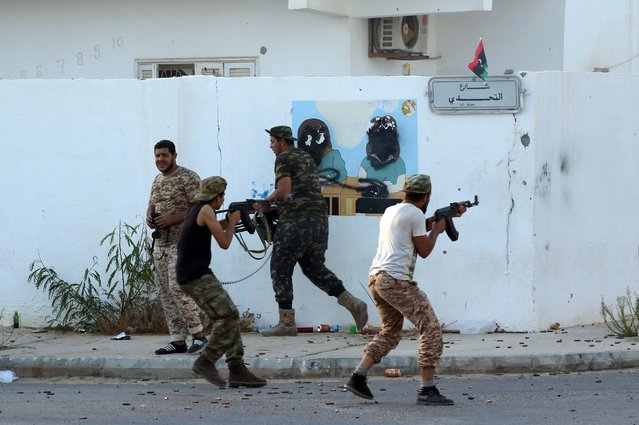 Forces loyal to Libya's UN-backed Government of National Accord (GNA) hold a position near the central area known as District One on August 21, 2016 as they fight against the Islamic State group (IS) jihadists holed up in the coastal city of Sirte, east of the capital Tripoli. Air force units of Libya's unity government launched an operation on August 20, 2016 to cut off potential escape routes for jihadists in Sirte, loyalist forces said. Pro-GNA forces, backed since early August by US air strikes, began an assault in mid-May to expel the Islamic State (IS) group from its Sirte stronghold. (Photo by Mahmud Turkia/AFP Photo) 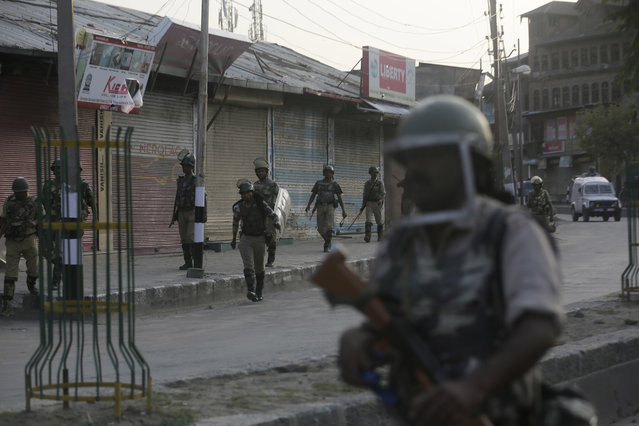 Indian paramilitary soldiers walk back towards their camp after a day long curfew in Srinagar, Indian controlled Kashmir, Sunday, August 21, 2016. Security lockdown and protest strikes continued for the 44th straight day Sunday, with tens of thousands of Indian armed police and paramilitary soldiers patrolling the tense region. The killing of a popular rebel commander on July 8 sparked some of Kashmir's largest protests against Indian rule in recent years. (Photo by Mukhtar Khan/AP Photo) 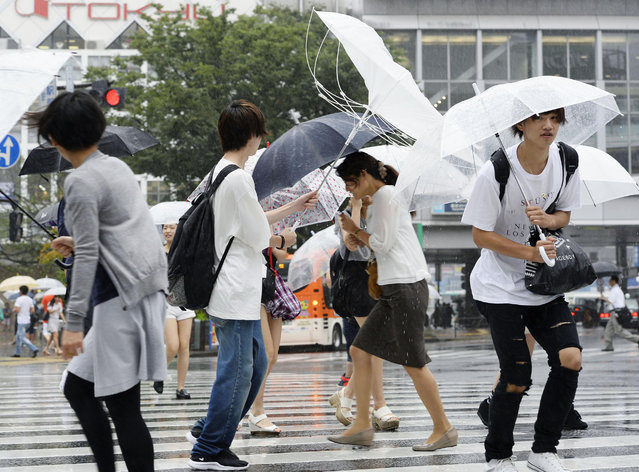 People walk in a strong wind caused by Typhoon Mindulle, in Tokyo Monday, August 22, 2016. The typhoon sweeping through Tokyo and surrounding areas has forced the cancellation of more than 400 domestic flights in Japan and disrupted train service. (Photo by Akiko Matsushita/Kyodo News via AP Photo) 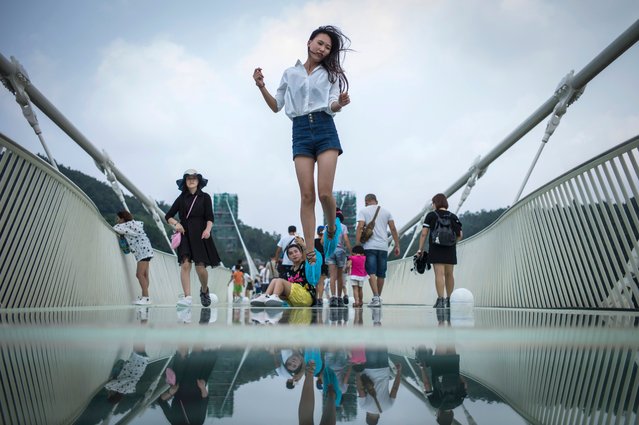 A visitor jumps for a photograph on the world's highest and longest glass-bottomed bridge above a valley in Zhangjiajie in China's Hunan Province on August 21, 2016. The bridge, which opened to the public on a trial basis on Saturday, spans 430 meters (1,410 feet) and rises about 300 meters (984 feet) above a valley in a scenic zone, making it the world's highest and longest glass-bottomed bridge according to Chinese state media. (Photo by Fred Dufour/AFP Photo)
Edit Del
22 Aug 2016 13:19:00, post received 0 comments
Publication archive:
←   →
Popular tags:
All tags
Last searches: