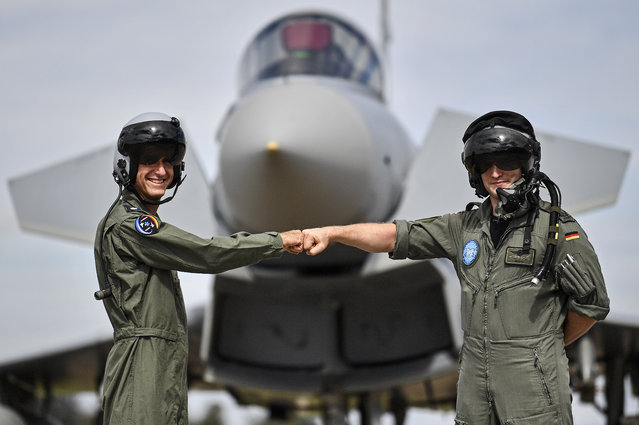 A pilot from Israel, left, and a pilot from Germany, right, pose in front of an Eurofighter at the airbase in Noervenich, Germany, Thursday, August 20, 2020. Pilots from Israel and Germany will fly together the next two weeks during the first joint military Air Force exercises between the two nations in Germany. (Photo by Martin Meissner/AP Photo) 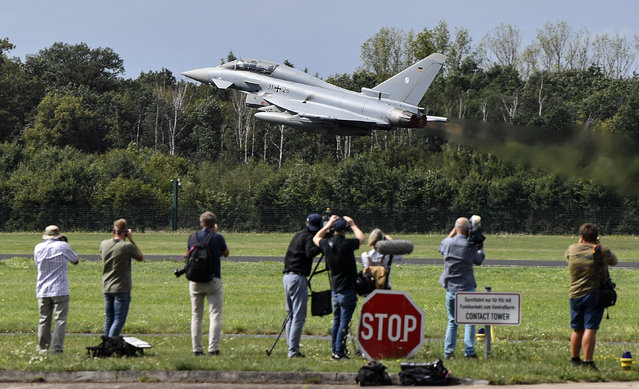 Journalists watch the take off of a German Eurofighter jet at the airbase in Noervenich, Germany, Thursday, August 20, 2020. (Photo by Martin Meissner/AP Photo) 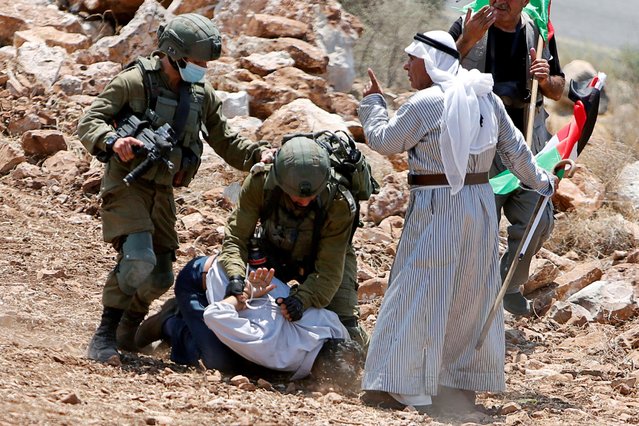 Israeli soldiers detain a Palestinian demonstrator during a protest against Jewish settlements near Tulkarm in the Israeli-occupied West Bank on August 20, 2020. (Photo by Raneen Sawafta/Reuters) 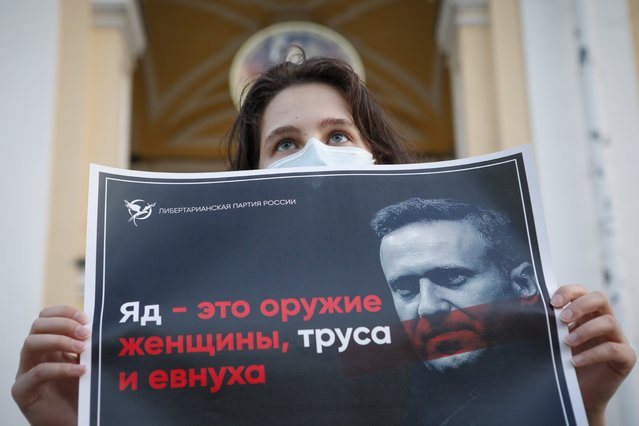 A protester stands holds a poster reads “poison is the weapon of a woman, a coward and a eunuch!” during a picket in support of Russian opposition leader Alexei Navalny in the center of St. Petersburg, Russia, Thursday, August 20, 2020. Russian opposition politician Alexei Navalny is on a hospital ventilator in a coma, after falling ill from a suspected poisoning, according to his spokeswoman Kira Yarmysh. (Photo by Elena Ignatyeva/AP Photo) 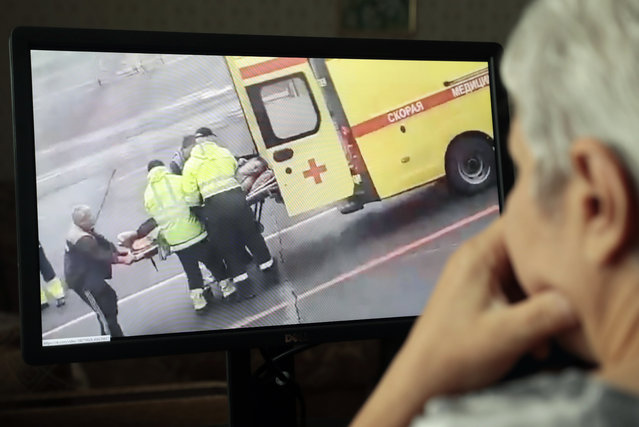 A person (R) in Moscow watches a video on social media showing Russian opposition activist and anti-corruption fund head Alexei Navalny being carried on a stretcher by an ambulance team, in Omsk, Russia, 20 August 2020. Navalny's spokeswoman Kira Yarmysh said on social media on 20 August that the opposition leader and critic of President Vladimir Putin was taken to hospital for alleged poisoning after he started feeling unwell during a flight from Siberia to Moscow. The plane made an emergency landing in the city of Omsk. (Photo by Sergei Chirikov/EPA/EFE) 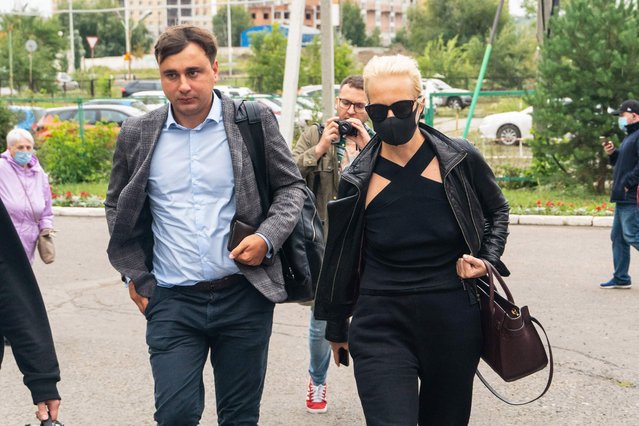 FBK anti-corruption foundation director Ivan Zhdanov and Yulia Navalnaya arrive at Omsk Emergency Hospital No. 1 where opposition leader Alexei Navalny was admitted after he fell ill in what his spokeswoman said was a suspected poisoning, in Omsk on August 20, 2020. (Photo by Yelena Latypova/AFP Photo) 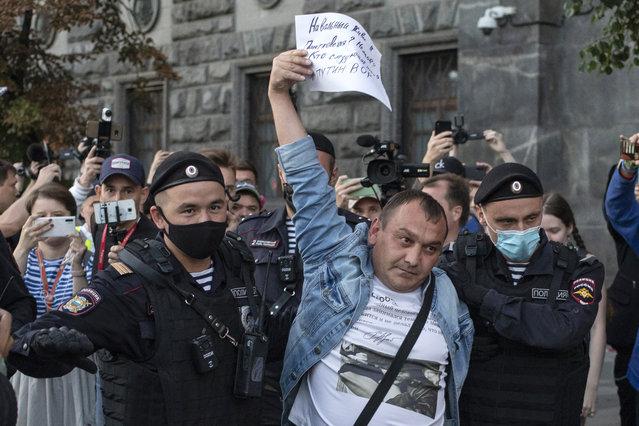 Police officers detain a protester as he comes to support Russian opposition leader Alexei Navalny in front of the building of the Federal Security Service (FSB, Soviet KGB successor) in Moscow, Russia, Thursday, August 20, 2020. The banner reads: “Navalny live!!! Politkovskaya? Nemtsov? Who is next? Putin is a thief”. (Photo by Pavel Golovkin/AP Photo) 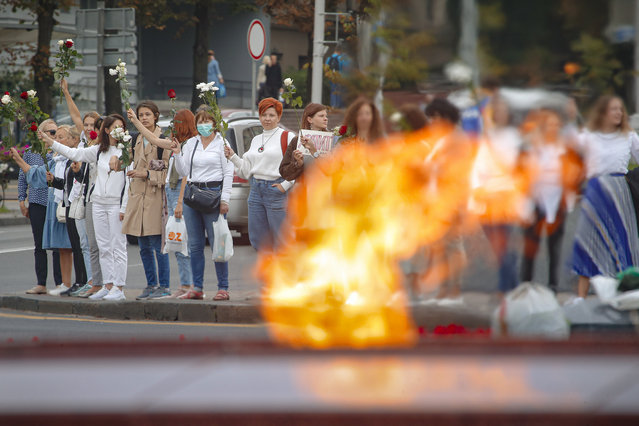 Belarusian opposition supporters hold flowers and flash victory signs during a protest in Minsk, Belarus, Thursday, August 20, 2020. Demonstrators are taking to the streets of the Belarusian capital and other cities, keeping up their push for the resignation of the nation's authoritarian leader. President Alexander Lukashenko has extended his 26-year rule in a vote the opposition saw as rigged. (Photo by Dmitri Lovetsky/AP Photo) 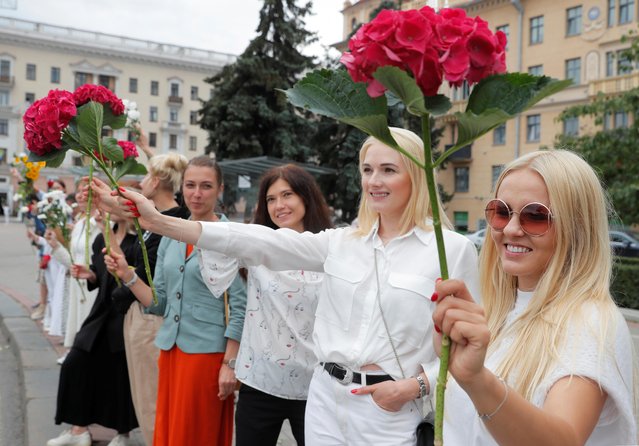 Women hold flowers during a demonstration against violence following recent protests to reject the presidential election results in Minsk, Belarus on August 20, 2020. (Photo by Vasily Fedosenko/Reuters) 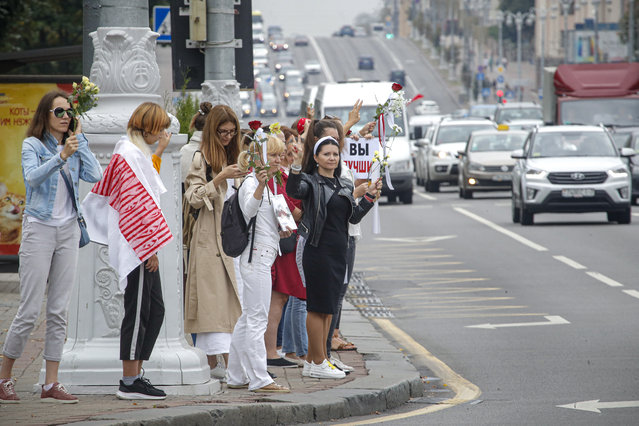 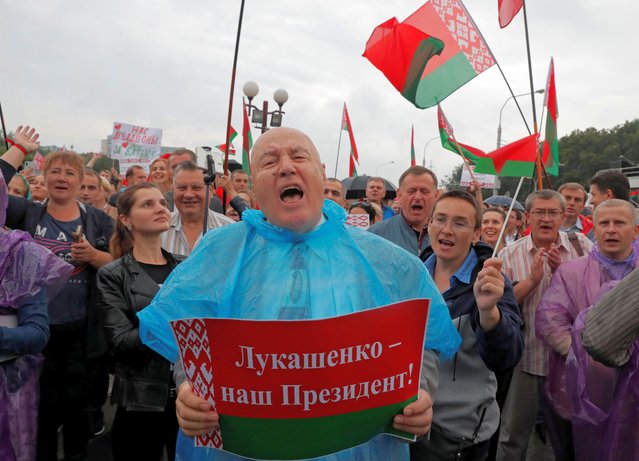 People attend a rally in support of Belarusian President Alexander Lukashenko in Minsk, Belarus on August 19, 2020. The placard reads: “Lukashenko is our president!”. (Photo by Vasily Fedosenko/Reuters) 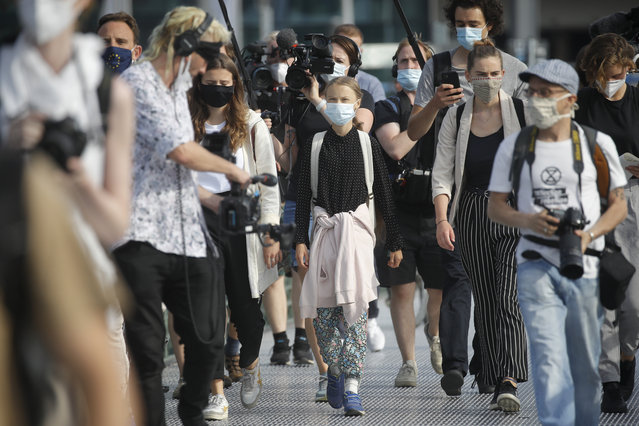 Swedish founder of the “School Strike for Climate” movement Greta Thunberg (C) wears a face mask as she walks to the Chancellery, where she was to meet the German Chancellor for talks on August 20, 2020. (Photo by Odd Andersen/AFP Photo) 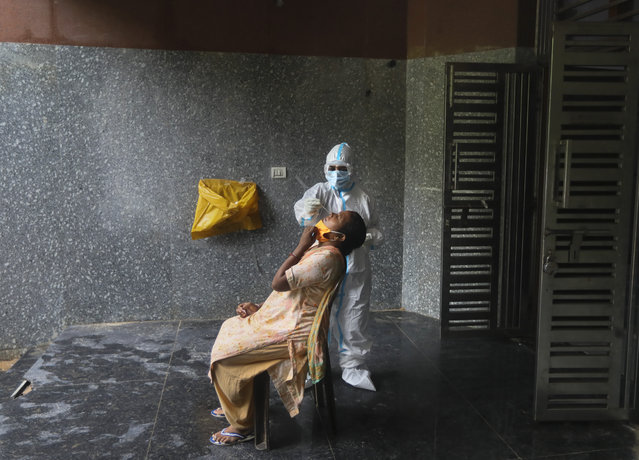 A health worker takes a nasal swab to test for COVID-19 in a government school in New Delhi, India, Thursday, August 20, 2020. The country has the fourth-most deaths in the world and the third-most cases, with over 2.7 million, including more than 64,000 new infections reported Wednesday. (Photo by Manish Swarup/AP Photo) 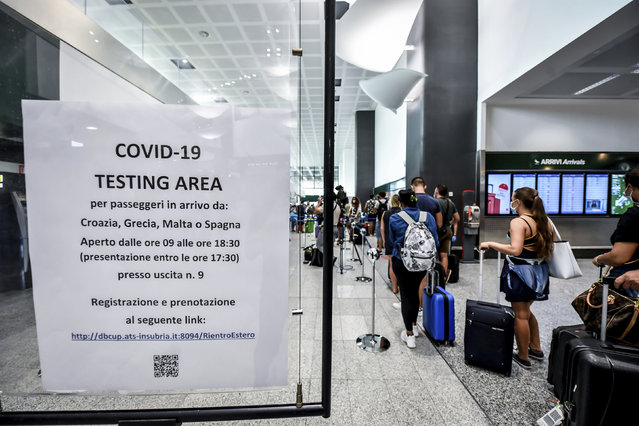 Passengers arriving from four Mediterranean countries at Milan's Malpensa airport wait in a line to be tested for COVID-19, Thursday, August 20, 2020. Italy's health minister issued an ordinance requiring the tests for all travelers arriving in Italy from Croatia, Greece, Malta or Spain. (Photo by Claudio Furlan/LaPresse via AP Photo) 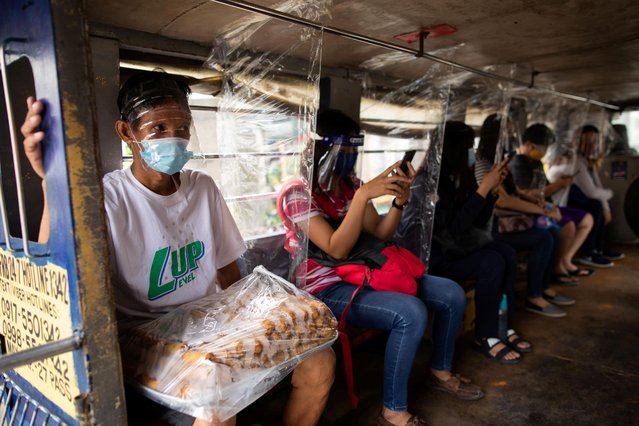 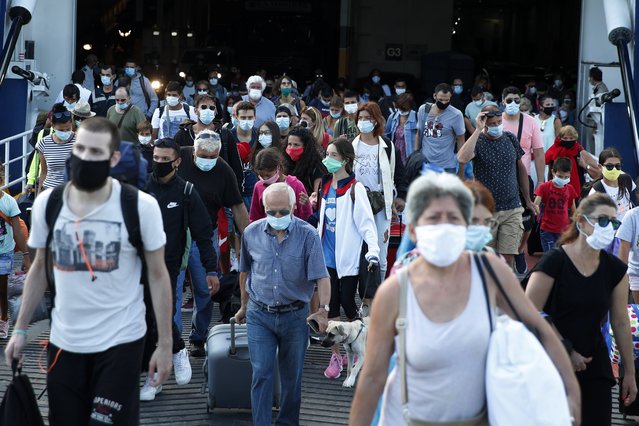 Travellers wearing face masks against the spread of the new coronavirus, disembark from a ferry at the port of Piraeus, near Athens, Thursday, August 20, 2020. Greece initially managed to keep the number of coronavirus cases and deaths low, imposing an early lockdown at the start of the pandemic. But most restrictions were lifted at the start of the summer, and the tourism-reliant country has welcomed in foreign visitors for the summer vacation period. (Photo by Thanassis Stavrakis/AP Photo) 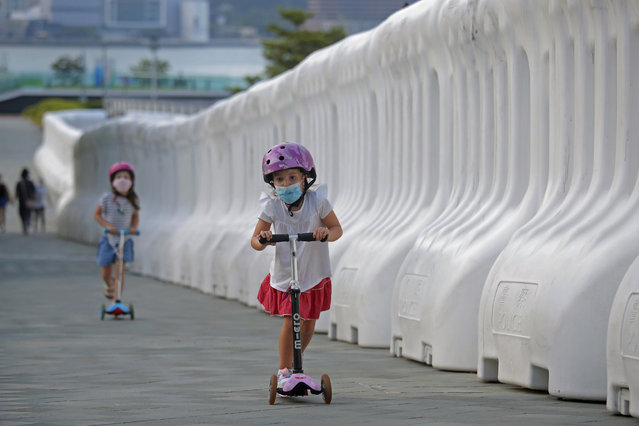 Kids wearing masks to protect against the coronavirus, play beside the water-filled barriers outside the Hong Kong Government Office in Hong Kong, Thursday, Aug. 20, 2020. (Photo by Kin Cheung/AP Photo) 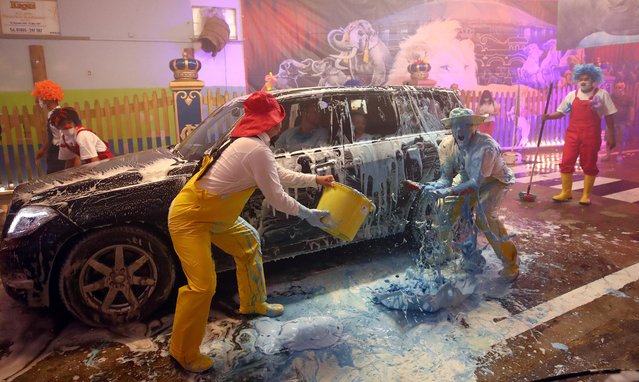 Clowns of the circus Krone joke around in the circus' own car wash to bring joy to the people, as the circus is not allowed to perform due to the coronavirus disease (COVID-19) outbreak, in Munich, Germany, August 20, 2020. (Photo by Michael Dalder/Reuters)
Edit Del
22 Aug 2020 00:07:00, post received 0 comments
Publication archive:
←   →
Popular tags:
All tags
Last searches: