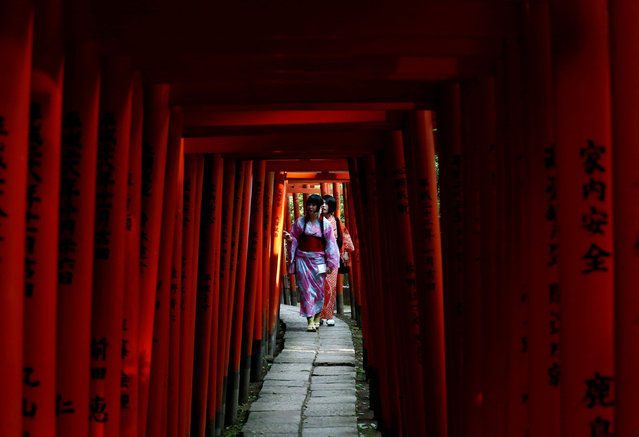 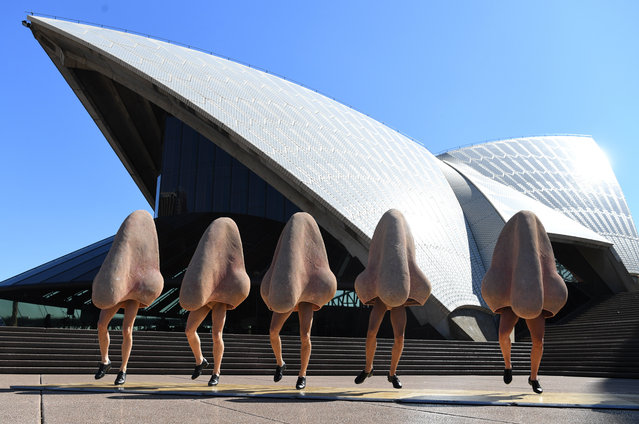 Cast members in costume from Opera Australia dance during a sneak preview from their production of Shostakovich's The Nose outside the Sydney Opera House in Sydney, Australia, 22 August 2017. (Photo by David Moir/EPA) 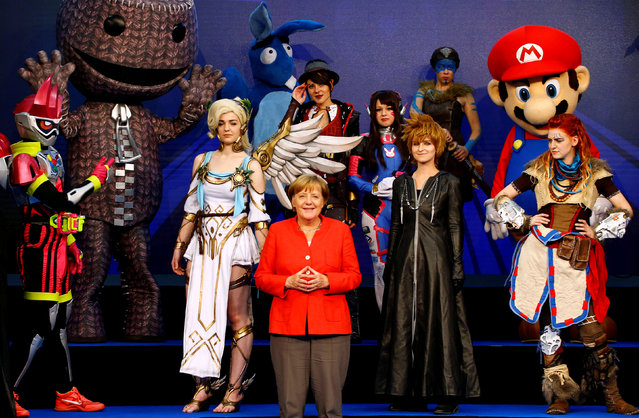 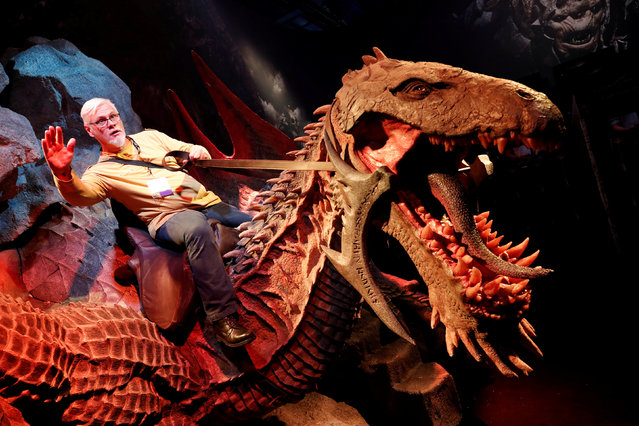 A man rides a model of a dragon during the opening of the world's largest computer games fair Gamescom in Cologne, Germany, August 22, 2017. (Photo by Wolfgang Rattay/Reuters) 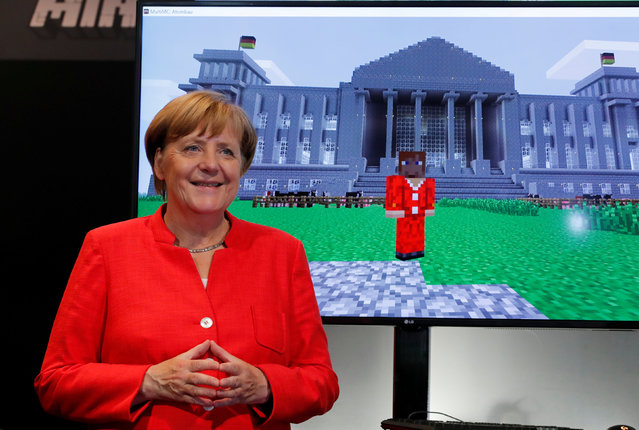 German Chancellor Angela Merkel stands next to a screen depicting a Minecraft rendition of her and the Reichstag building during the opening of the world's largest computer games fair Gamescom in Cologne, Germany, August 22, 2017. (Photo by Wolfgang Rattay/Reuters) 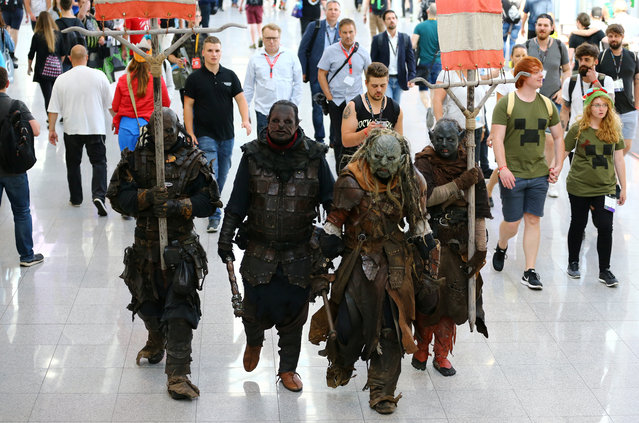 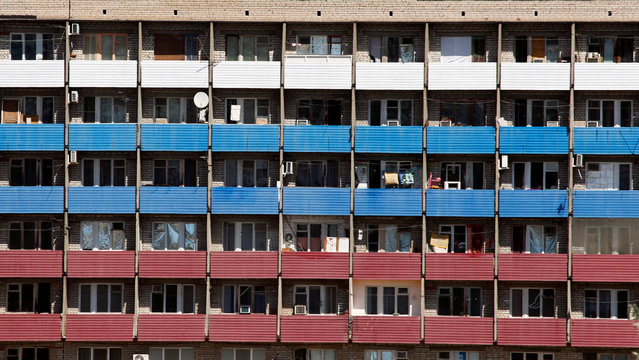 A view shows a building painted in the colours of Russia's national flag in Volgograd, the host city for the 2018 FIFA World Cup, Russia August 22, 2017. (Photo by Maxim Shemetov/Reuters) 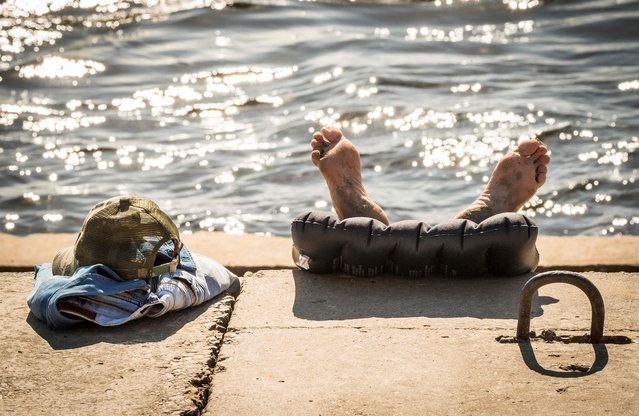 A man sunbaths on the Volga river bank in Volgograd on August 22, 2017 Volgograd will host several games of the FIFA World Cup 2018. (Photo by Mladen Antonov/AFP Photo) 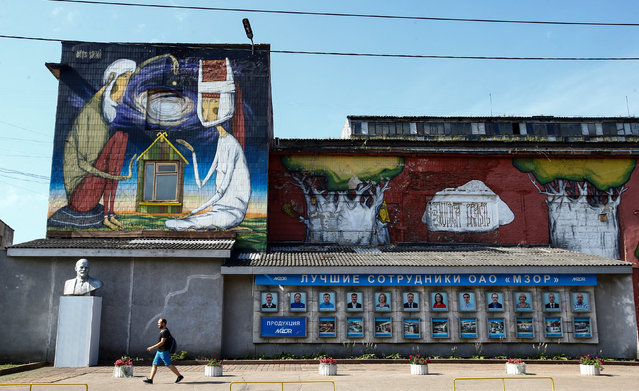 A monument to Soviet state founder Vladimir Lenin and huge paintings on building's walls are seen at Open Joint Stock Company “MZOR” at Oktyabrskaya street in Minsk, Belarus, August 10, 2017. The sign on the wall over portraits reads “The best workers of OJSC “MZOR”. (Photo by Vasily Fedosenko/Reuters) 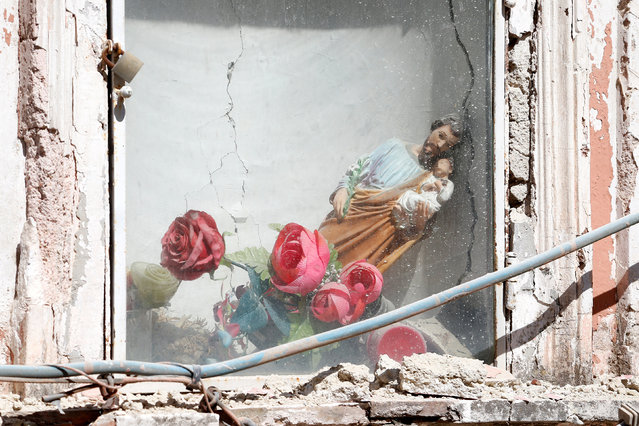 A religious statue slumps to the side after an earthquake hit the island of Ischia, near Naples, Italy August 22, 2017. (Photo by Ciro De Luca/Reuters) 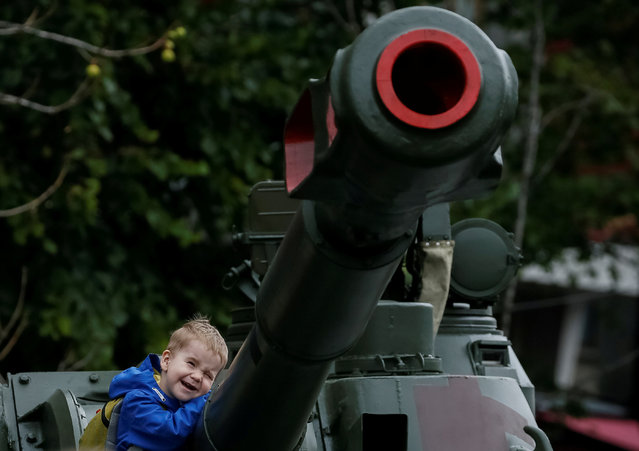 A boy attends an exhibition of Ukrainian military vehicles before the celebration of Independence Day scheduled for August 24, in Kiev, Ukraine, August 22, 2017. (Photo by Gleb Garanich/Reuters) 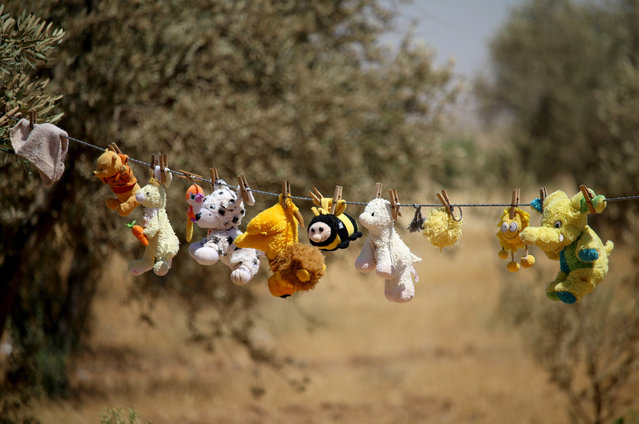 Dolls are seen on a laundry rope near tents during civil war in Daraa, Syria on August 17, 2017. (Photo by Ammar Al Ali/Anadolu Agency/Getty Images) 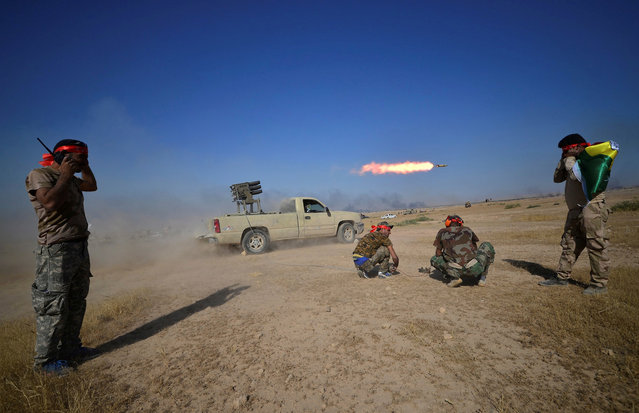 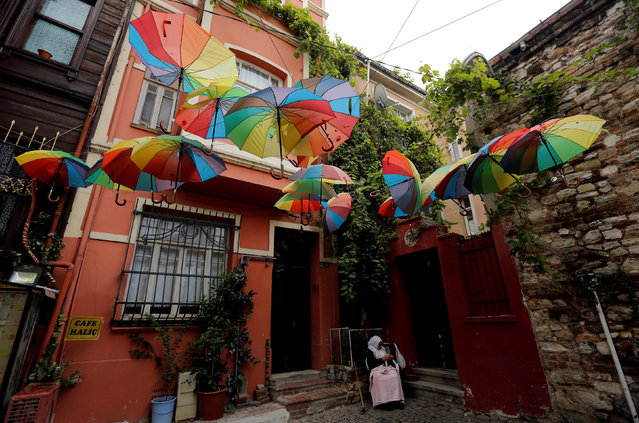 A woman sits at a street, in Suleymaniye neighbourhood of Istanbul, Turkey, August 22, 2017. (Photo by Murad Sezer/Reuters) 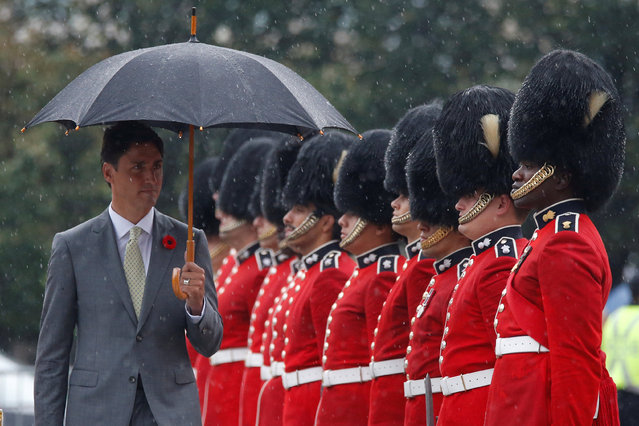 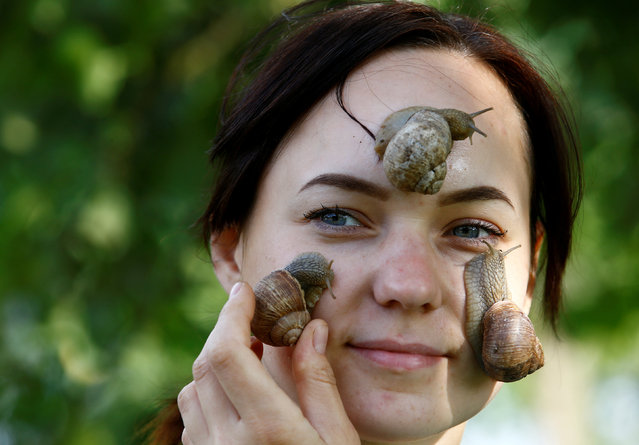 Victoria Rabkova, wife of the farmer Vladimir Rabkov, holds snails (Helix Pomatia) on her face at their farm in the village of Dolginovo, Belarus August 22, 2017. (Photo by Vasily Fedosenko/Reuters) 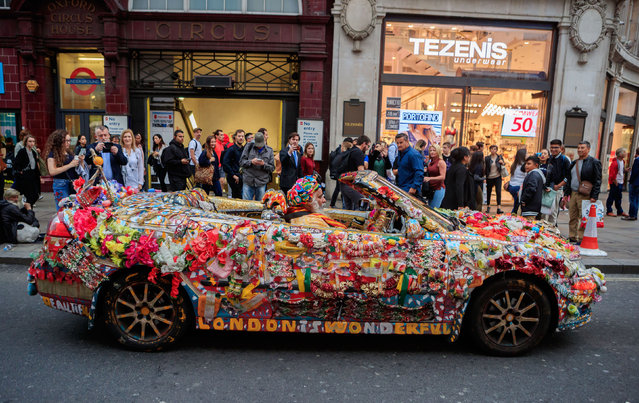 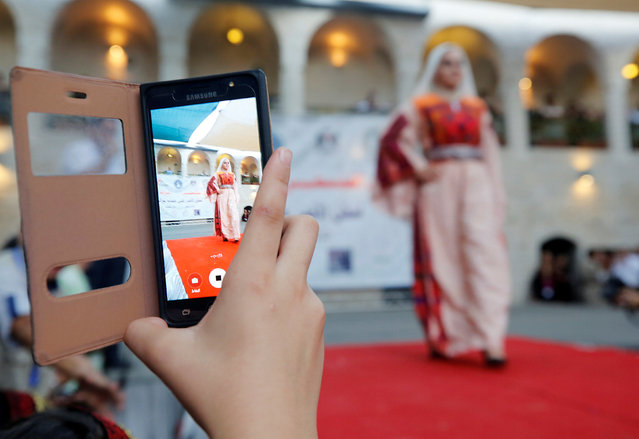 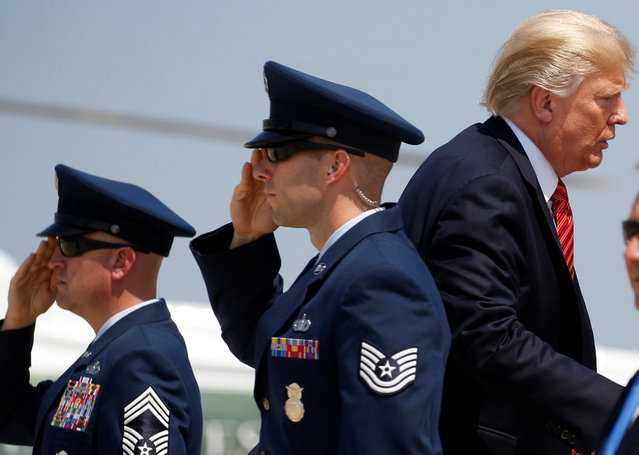 U.S. President Donald Trump is saluted as he boards Air Force One before departing for Arizona from Joint Base Andrews, Maryland, U.S., August 22, 2017. (Photo by Joshua Roberts/Reuters) 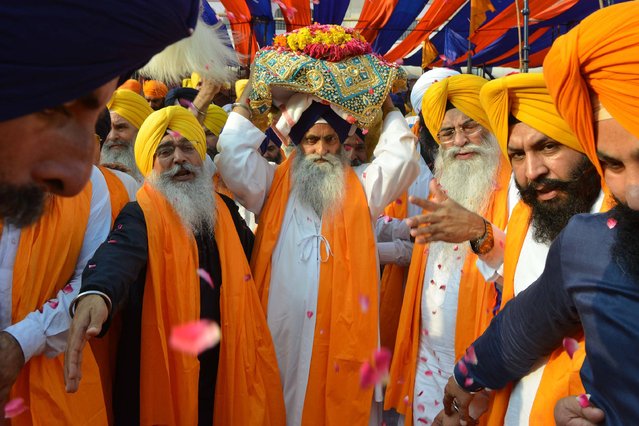 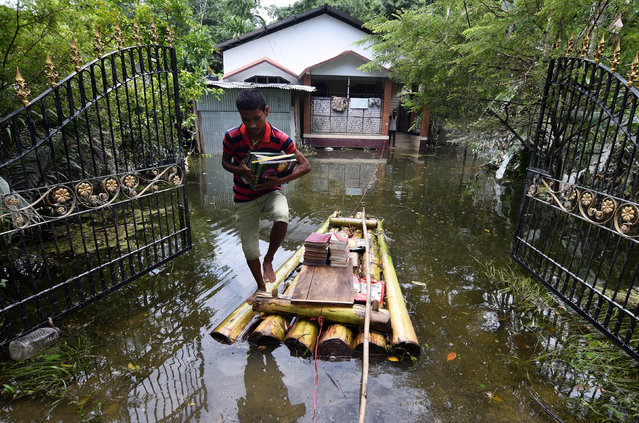 A boy uses a banana raft to transport his books in Jakhalabandha area in Nagaon district, in the northeastern state of Assam, India August 21, 2017. (Photo by Anuwar Hazarika/Reuters) 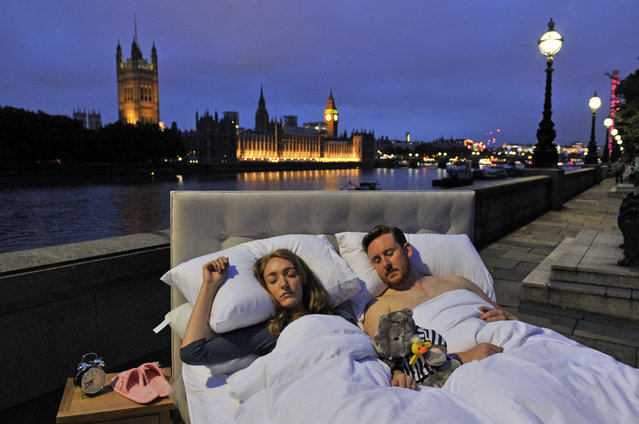 Londoners enjoy a “Silent Night” as Big Ben falls silent, London, UK on August 21, 2017. Londoners snuggle up to enjoy the city's first silent night as Big Ben chimed its last for four years. As the sun set over London last night the city bid a temporary farewell to the chimes of its beloved Big Ben. Londoners were testing out the new quiet of the Southbank in an unusual fashion. A luxurious bed, courtesy of bed firm, Silentnight, complete with fluffy white duvet, plump pillows, a hot water bottle and a cuddly toy, emerged in the heart of the city, just in time for bed. It didn't take local residents and workers long to make the most of the peace and quiet with the city's tired workers climbing in for a nap. Rose Allerston from Clapham, London said “After a stressful day in the office, I couldn't think of anything better than going home and climbing into bed – but when I saw this bed opposite Big Ben I just couldn't resist getting in for a snuggle”. (Photo by Imagewise Ltd/Rex Features/Shutterstock)
Edit Del
23 Aug 2017 08:44:00, post received 0 comments
Publication archive:
←   →
Popular tags:
All tags
Last searches: