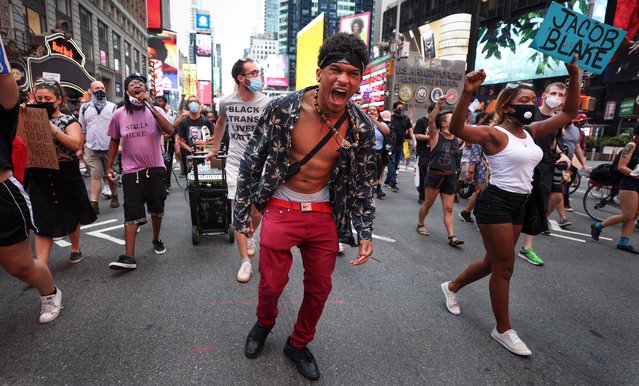 People march through Times Square during a protest in response to the shooting on 23 August by police officers in Kenosha, Wisconsin of Jacob Blake, a Black man who was trying to get into his car with his children, in New York, New York, USA, 24 August 2020. Blake was shot in the back and is in stable condition following the shooting which has sparked massive protests in Kenosha and around the country. (Photo by Justin Lane/EPA/EFE) 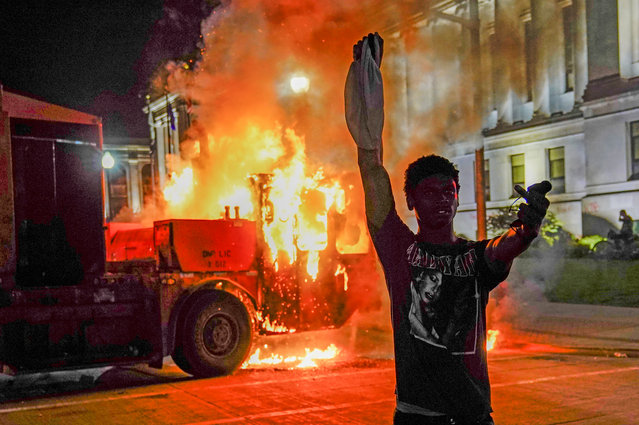 A protestor takes his turn posing in front of a burning garbage truck during a seconed night of unrest in the wake of the shooting of Jacob Blake by police officers, in Kenosha, Wisconsin, USA, 24 August 2020. According to media reports Jacob Blake, a black man, was shot by a Kenosha police officer or officers responding to a domestic distubance call on 23 August, setting off protests and unrest. Blake was taken by air ambulance to a Milwaukee, Wisconsin hospital and protests started after a video of the incident was posted on social media. (Photo by Tannen Maury/EPA/EFE) 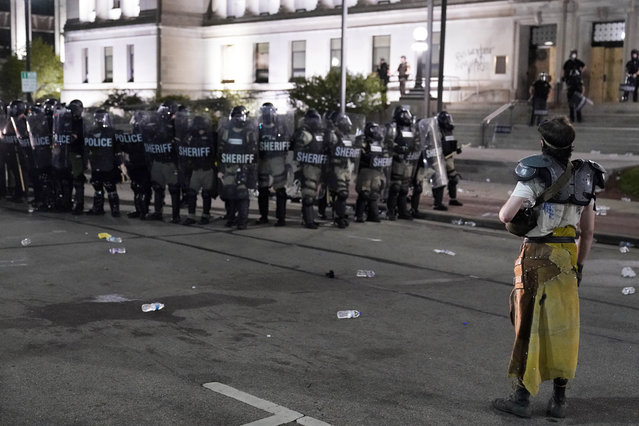 A protester stands off with police in riot gear outside the Kenosha County Courthouse, late Monday, August 24, 2020, in Kenosha, Wis. Protesters converged on the county courthouse during a second night of clashes after the police shooting of Jacob Blake a day earlier turned Kenosha into the nation's latest flashpoint city in a summer of racial unrest. (Photo by David Goldman/AP Photo) 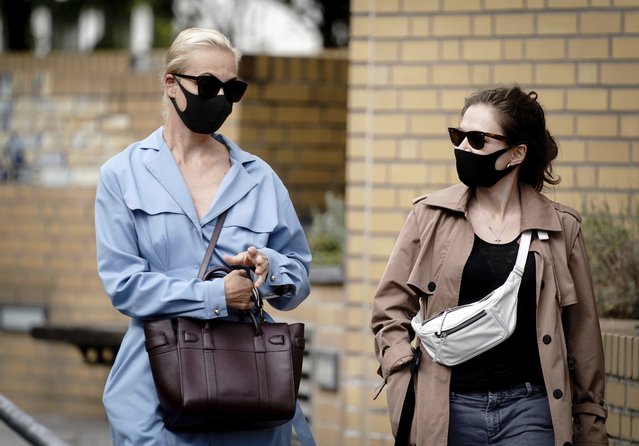 Alexei Navalny's wife Yulia, left, arrives at the Charite hospital in Berlin, Germany, Monday, August 24, 2020. Russian oppositional Alexej Nawalny is being treated at the hospital by German doctors after a suspected poisoning. (Photo by Kay Nietfeld/dpa via AP Photo) 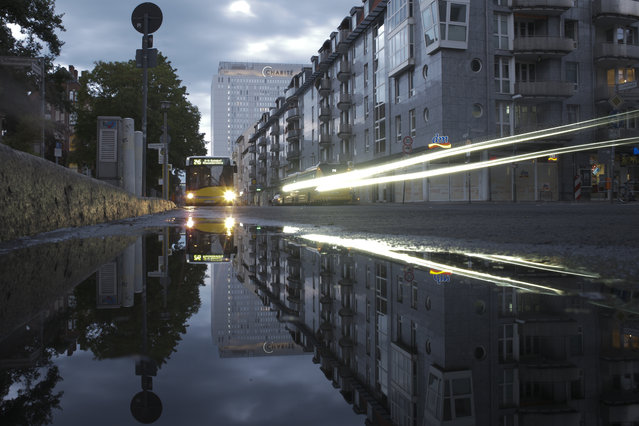 Vehicles drive in front of the central building of Charite Hospital, back centre, where Russian dissident Alexei Navalny is being treated in Berlin, Germany, Monday, August 24, 2020. The German hospital treating Russian dissident Alexei Navalny says tests indicate that he was poisoned, according to a statement Monday, saying that the team of doctors who have been examining Navalny since he was admitted Saturday have found the presence of “cholinesterase inhibitors” in his system. Cholinesterase inhibitors are a broad range of substances that are found in several drugs, but also pesticides and nerve agents. (Photo by Markus Schreiber/AP Photo) 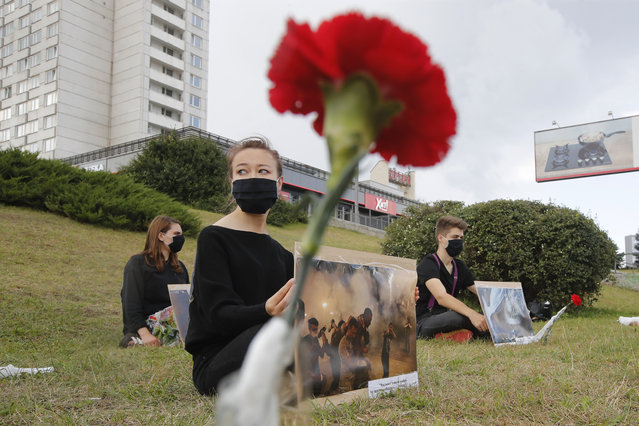 People display pictures of protests as they sit near the place where Alexander Taraikovsky died amid the clashes protesting the election results, in Minsk, Belarus, Monday, August 24, 2020. Belarusian authorities on Monday detained two leading opposition activists who have helped spearhead a wave of protests demanding the resignation of the country's authoritarian ruler of 26 years. (Photo by Dmitri Lovetsky/AP Photo) 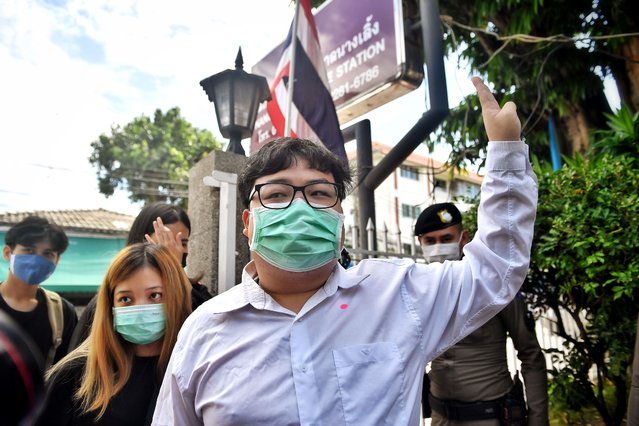 Activist Parit “Penguin” Chiwarak gives the three-fingered “Hunger Games” salute, a symbol of resistance, as he arrives at the Nangloeng police station in Bangkok, Thailand, Tuesday, Aug, 25, 2020. Four prominent Thai anti-government activists, including Parit, answered a summons at a Bangkok police station on Tuesday, the latest in a series of legal moves by the authorities to clamp down on protests that are the most serious challenge yet to Prime Minister Prayuth Chan-ocha's administration. (Photo by Lillian Suwanrumpha/AFP Photo) 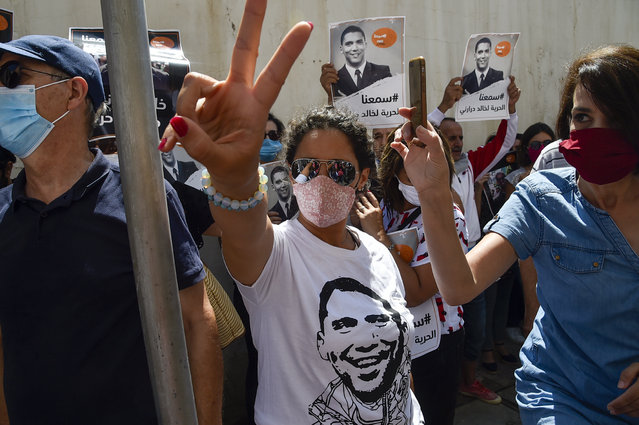 Algerian journalists gather in protest to demand the release of their colleague Khaled Drareni, who was sentenced earlier this month to three years in jail for “inciting an unarmed gathering” and “endangering national unity”, in the capital Algiers on August 24, 2020. The Algerian justice system has in recent months increased the court cases and convictions against alleged Hirak militants, opposition politicians, journalists and social media users. (Photo by Ryad Kramdi/AFP Photo) 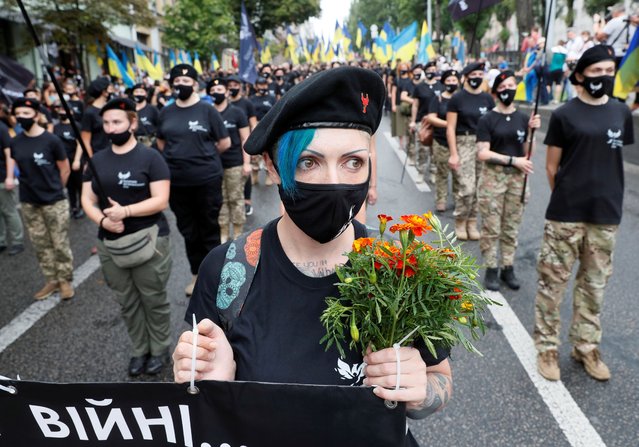 Members of the Women's veteran movement take part in the March of Defenders of Ukraine as part of Ukraine's Independence Day celebrations, in Kyiv, Ukraine on August 24, 2020. (Photo by Gleb Garanich/Reuters) 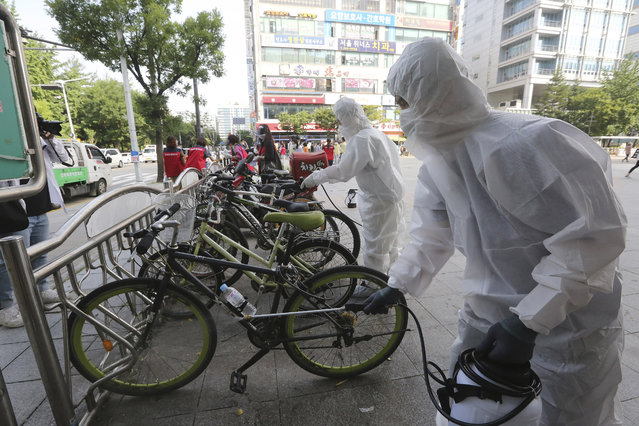 Workers and volunteers disinfect as a precaution against the coronavirus on a street in Goyang, South Korea, Tuesday, August 25, 2020. South Korea is closing schools and switching back to remote learning in the greater capital area as the country counted its 12th straight day of triple-digit daily increases in coronavirus cases. (Photo by Ahn Young-joon/AP Photo) 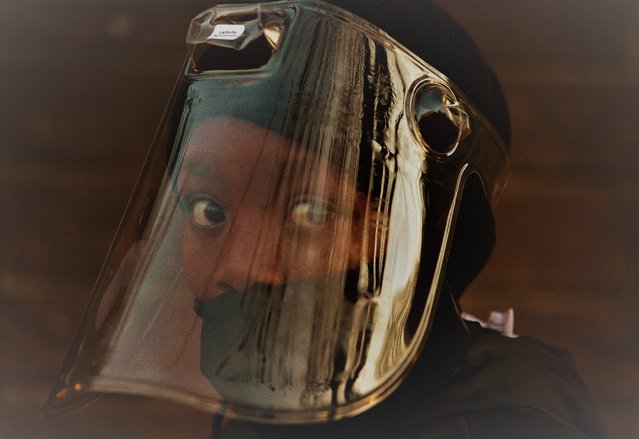 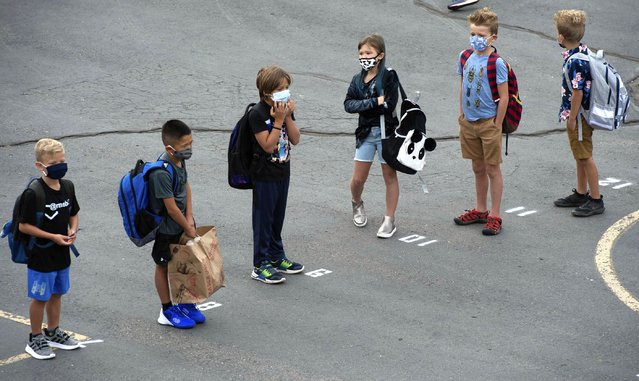 Students at Canyon View Elementary in Cottonwood Heights line up on the playground as they go back to school for the first day of classes for the Canyons School District on Monday, August 24, 2020. (Photo by Francisco Kjolseth/The Salt Lake Tribune via AP Photo) 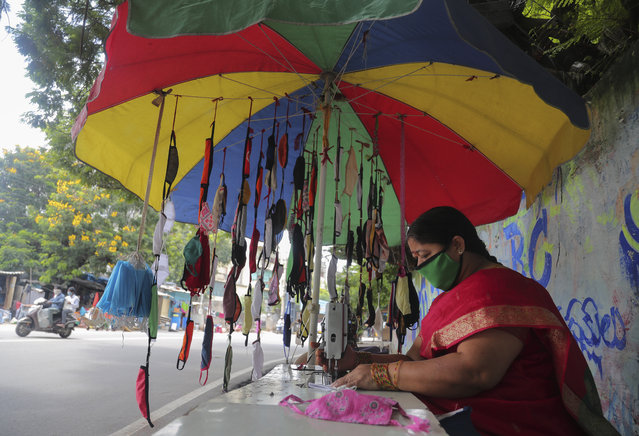 Indian woman Sree Giri Shereesha who does tailoring work on a pavement makes face masks in Hyderabad, India, Monday, August 24, 2020. India has the third-highest coronavirus caseload after the United States and Brazil, and the fourth-highest death toll in the world. (Photo by Mahesh Kumar A./AP Photo) 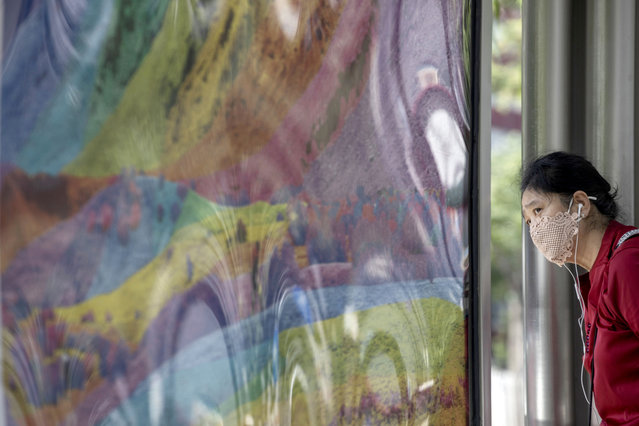 A resident wears a mask to curb the spread of the coronavirus waits for a bus in Beijing on Monday, August 24, 2020. China has gone several days without reporting a new local case of COVID-19, with the Beijing International Film Festival among public events that are returning. (Photo by Ng Han Guan/AP Photo) 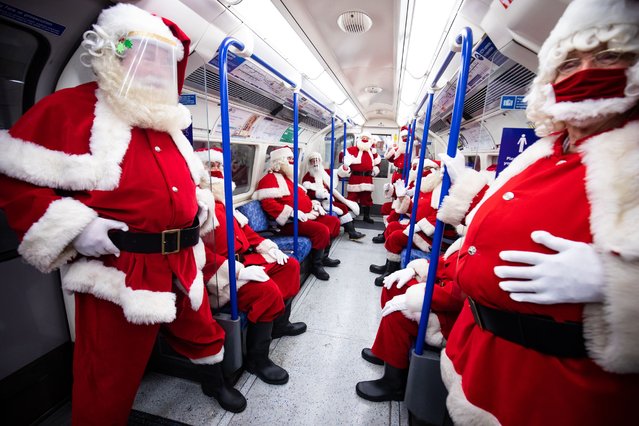 Members of the socially distant santa school travel to Southwark Cathedral, London on August 24, 2020. The Ministry of Fun's summer school aims to create COVID-safe Christmas grottos by teaching Father Christmases how to appear safely in person whilst maintaining the Christmas magic. (Photo by Aaron Chown/PA Images via Getty Images) 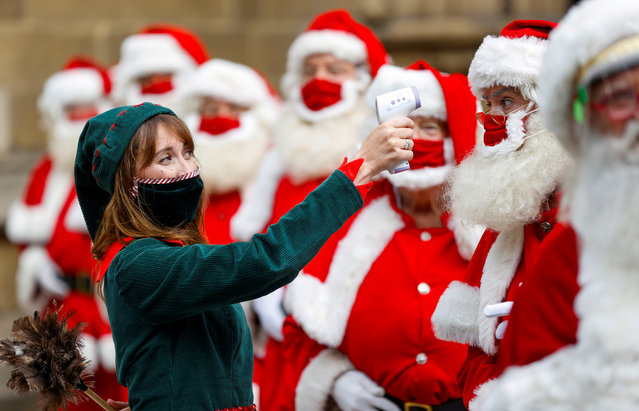 A woman dressed as an elf poses for a photo with attendees of the Ministry of Fun Santa School outside Southwark Cathedral, in London, Britain on August 24, 2020. (Photo by John Sibley/Reuters) 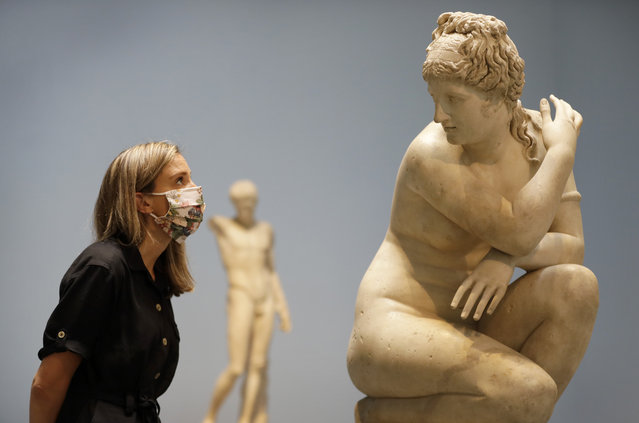 A museum employee looks towards a marble statue of Crouching Venus, Roman, 2nd century AD, during a press view at The British Museum in London, Monday, August 24, 2020. The museum will reopen to the public on Aug. 27. A new one-way route round the Ground Floor galleries will allow visitors access to many thousands of objects. (Photo by Kirsty Wigglesworth/AP Photo)
Edit Del
26 Aug 2020 00:07:00, post received 0 comments
Publication archive:
←   →
Popular tags:
All tags
Last searches: