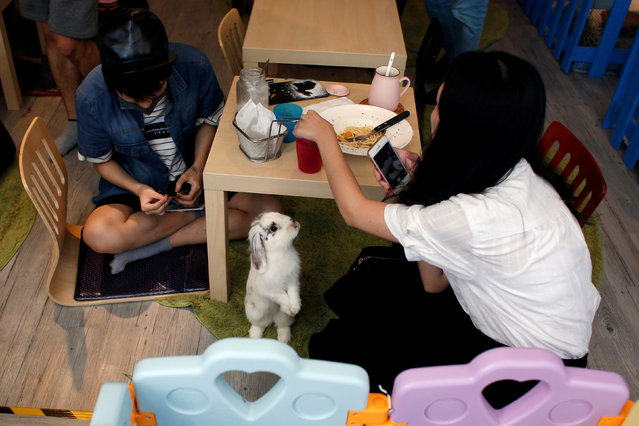 A rabbit looks at a customer at the first rabbit cafe in Hong Kong, China August 25, 2016. (Photo by Bobby Yip/Reuters) 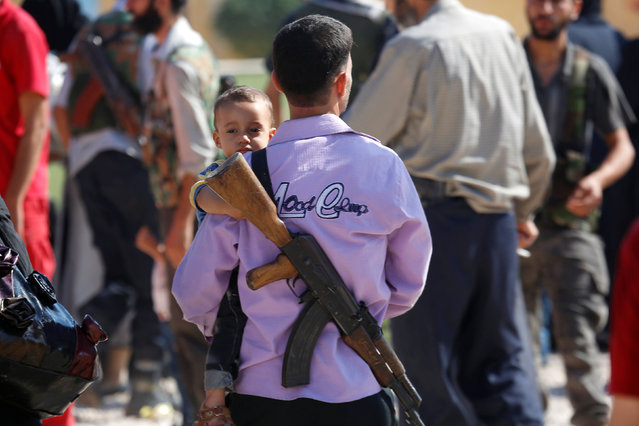 A rebel fighter carries a boy as civilians and rebels who were evacuated from the besieged Damascus suburb of Daraya, after an agreement reached on Thursday between rebels and Syria's army, arrive in the rebel-controlled city of Idlib August 27, 2016. (Photo by Ammar Abdullah/Reuters) 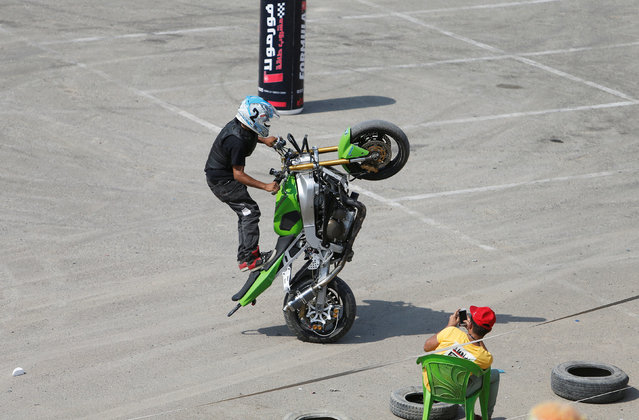 An Iraqi biker performs on his motorcycle in Baghdad, Iraq August 27, 2016. (Photo by Thaier Al-Sudani/Reuters) 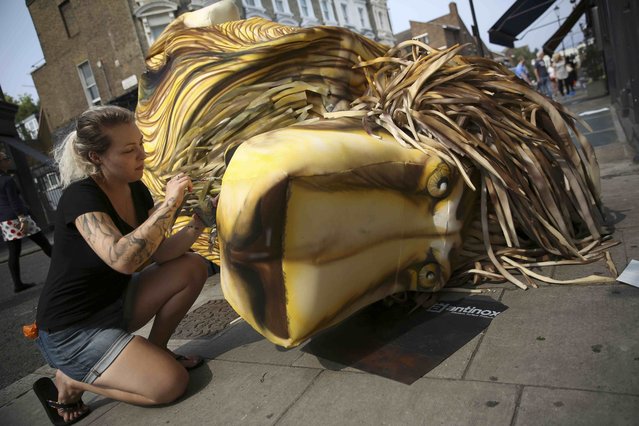 A woman decorates a lion head which will form a float at the Notting Hill Carnival in London, Britain August 27, 2016. (Photo by Neil Hall/Reuters) 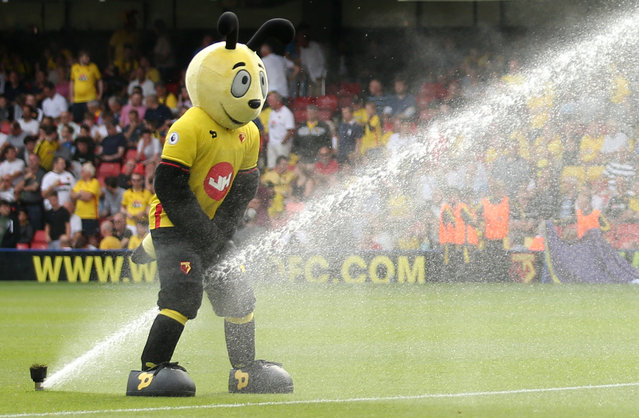 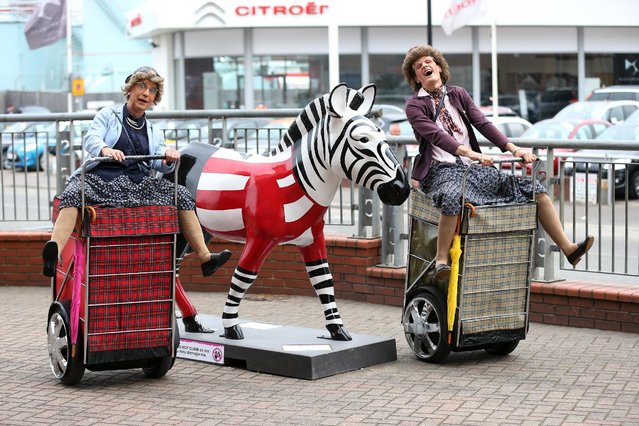 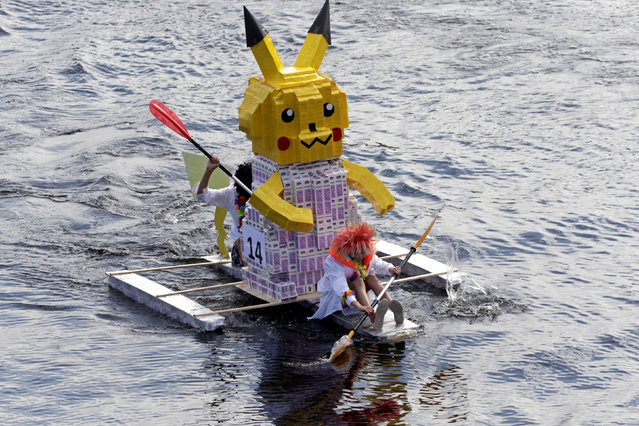 People navigate along the Lielupe river as they participate in the Milk Carton Boat Race in Jelgava, Latvia August 27, 2016. (Photo by Ints Kalnins/Reuters) 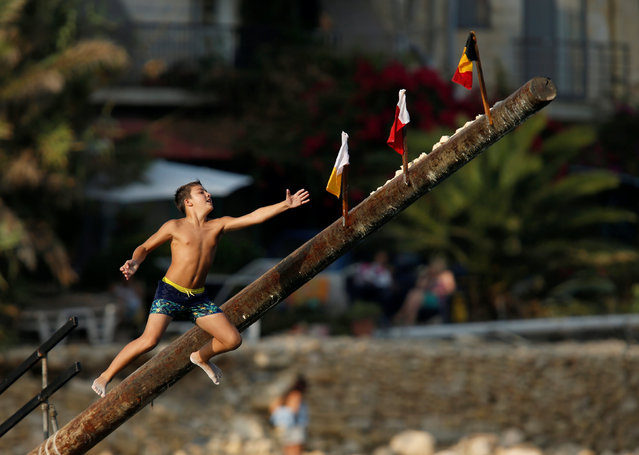 A child tries to grab a flag on the “gostra”, a pole covered in grease, during the religious feast of St Julian, patron of the town of St Julian's, outside Valletta, Malta, August 27, 2016. In the traditional “gostra”, a game stretching back to the Middle Ages, young men, women and children have to make their way to the top and try to uproot one of the flags to win prizes. From May to September in Malta, there is hardly any weekend when a town or a village is not celebrating the feast of its patron saint or other saints revered in different churches. (Photo by Darrin Zammit Lupi/Reuters) 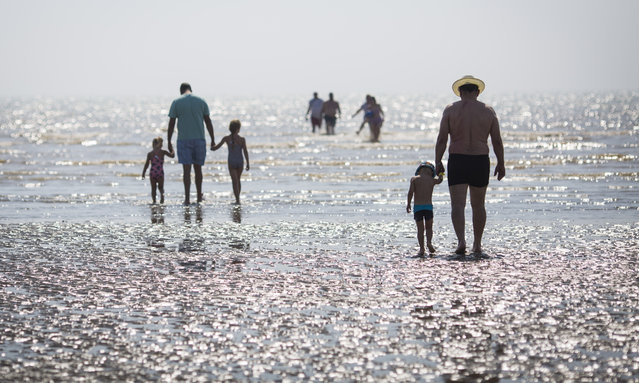 Beachgoers walk towards the sea on Camber Sands on August 25, 2016 in Rye, England. The day before, five men drowned having got into difficulty when the tides turned in Camber Sands, East Sussex. (Photo by Jack Taylor/Getty Images) 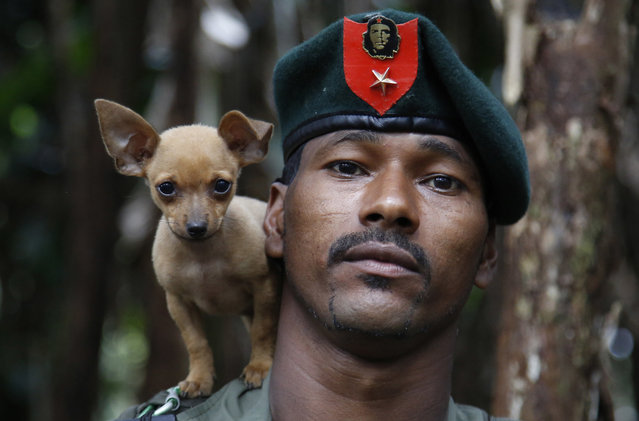 In this August 13, 2016 photo, a rebel soldier of the 48th Front of the Revolutionary Armed Forces of Colombia, or FARC, poses for a photo with his dog in the southern jungles of Putumayo, Colombia. As the country’s half-century conflict winds down, with the signing of a peace deal with the Government perhaps just days away, thousands of FARC rebels are emerging from their hideouts and preparing for a life without arms. (Photo by Fernando Vergara/AP Photo) 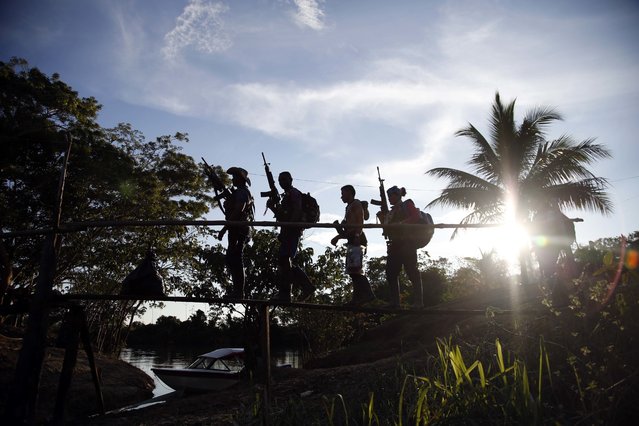 In this August 12, 2016 photo, rebels of the 48th Front of the Revolutionary Armed Forces of Colombia walk on a makeshift footbridge in the southern jungles of Putumayo, Colombia. With the peace accords about to signed between the FARC and the governemt, gone are the days when they had to change camp every few days for fear of being stunned in their sleep by bombs falling from the skies. (Photo by Fernando Vergara/AP Photo) 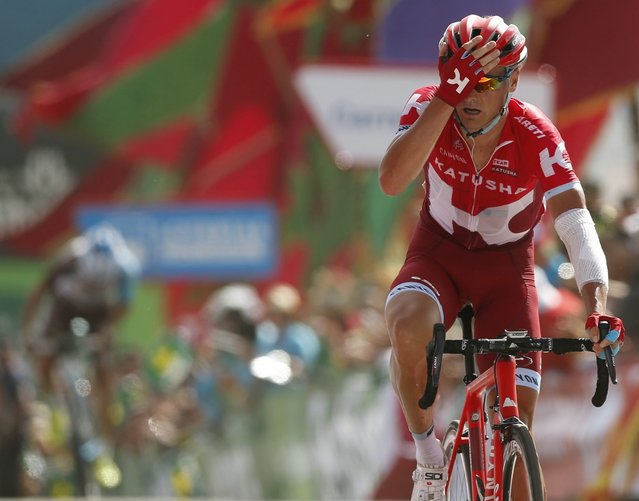 Russian Sergey Lagutin of Katusha celebrates his victory in the 8th stage of the Spanish Vuelta, a 181,5 km race between Villalpando and La Camperona, in Spain on 27 August 2016. (Photo by Javier Lizon/EPA) 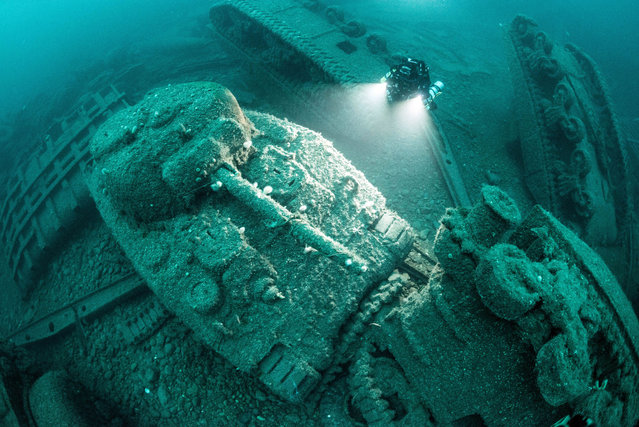 American Sherman tanks from the second world war lie on the Atlantic seabed where the ships that were carrying them were torpedoed and sunk off the north-west coast of Ireland on August 26, 2016. (Photo by Darragh Norton/Caters News Agency) 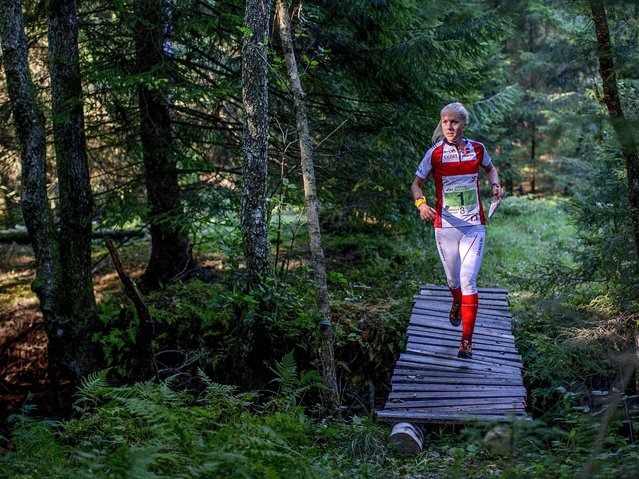 Maja Alm of Denmark in action during the Wonen'srelay competition at the World Orienteering Championships in Tanum, south of Sweden, 27 August 2016. (Photo by Adam Ihse/EPA) 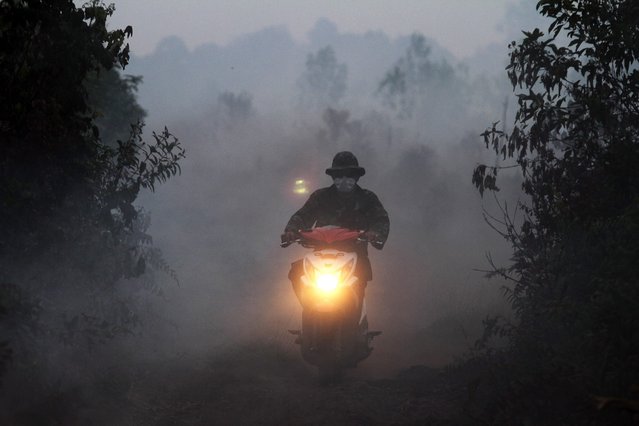 An Indonesian soldier rides a motorbike through thick smoke from burning land in Kampar, Riau province, Indonesia, 27 August 2016. According to media reports, thousands of firefighters have been sent in Riau province to control the land and forest fire. Indonesian authorities reported that they have arrested more than 450 people linked to forest fires that hit the country in previous years caused a cloud of toxic smoke which affected several countries in the region, local media reported 26 August 2016. The head of the National Police, Tito Karnavian, said the arrests serve as a deterrent against companies and farmers who start uncontrolled burning of agricultural production land for cleaning. (Photo by Rony Muharrman/EPA) 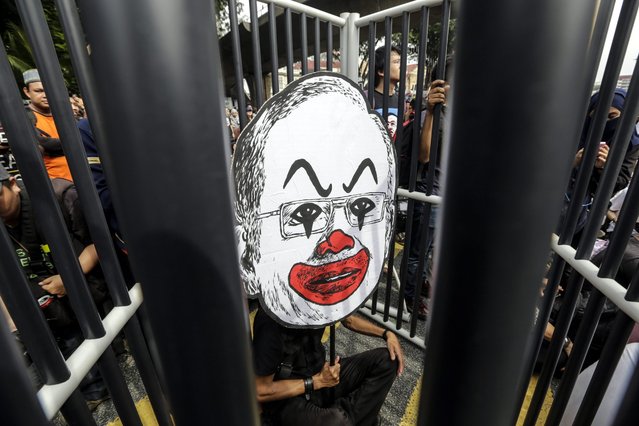 A caricature of Malaysian Prime Minister, Najib Abdul Razak is placed inside a mock jail during a rally in Kuala Lumpur, Malaysia, 27 August 2016. Malaysian activist holds a mass rally to demand the arrest of the unnamed Malaysian Official 1 (MO1) for an intercontinental corruption scheme laundering funds from the Malaysian sovereign wealth fund 1MDB. According to the proceedings, more than 3.5 billion US dollar in funds belonging to 1MDB was purportedly stolen by high-level 1MDB officials and their acquaintances from 2009 through 2015. Malaysian government-owned 1MDB was established in 2009 to bring long-term economic development to the country by promoting direct foreign investment and global partnership. (Photo by Ahmad Yusni/EPA) 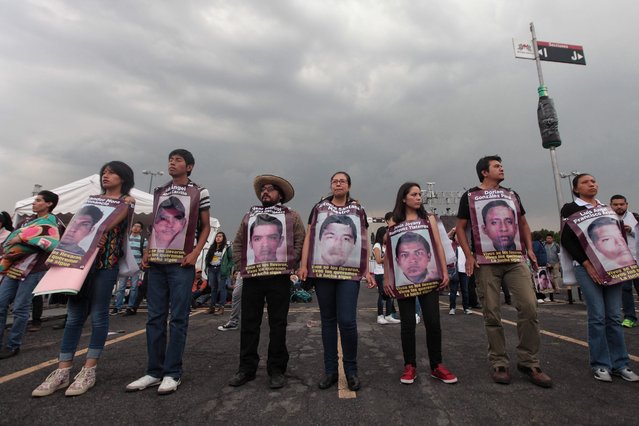 Mexicans citizens hold signs depicting several missing education students while attending a concert entitled “Voces por los 43” (lit. Voices for the 43) in commemoration of the 43 missing education students from the Ayotzinapa Rural Teacher's College, at the Azteca Stadium in Mexico City, Mexico, 26 August 2016. The 43 missing students, who were abducted after a clash with local police while travelling to Mexico City on 26 September 2016, were presumably kidnapped and murdered, although the culprits of the alleged crime have yet to be formally identified. The concert was held to mark the 23 months that have passed since the students were declared missing. (Photo by Sashenka Gutierrez/EPA) 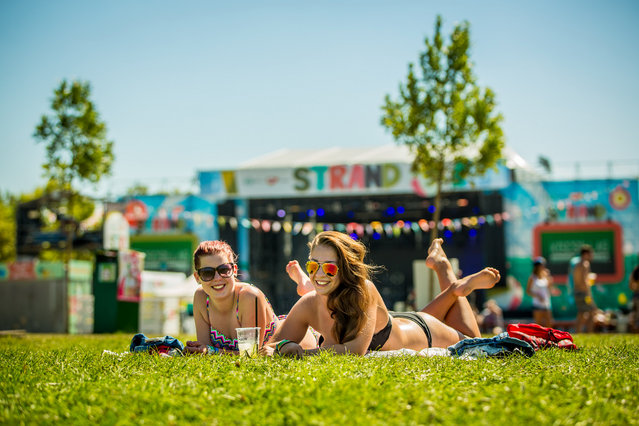 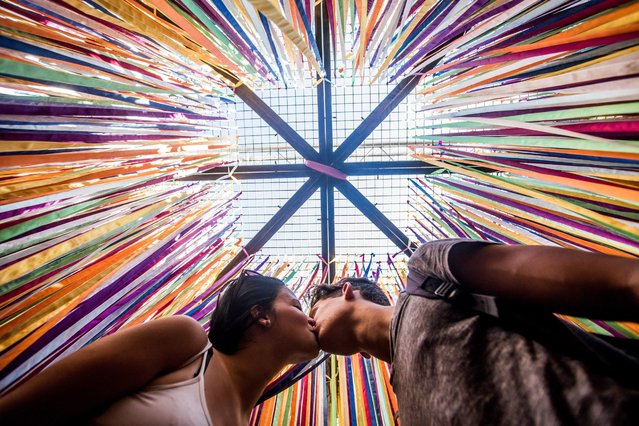 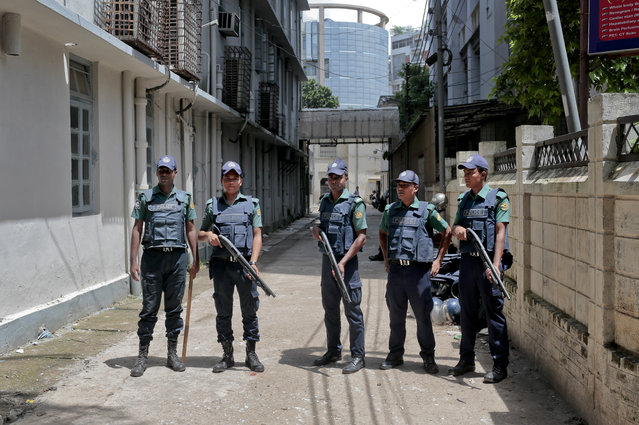 In this Wednesday, July 27, 2016, file photo, Bangladeshi policemen stand guard outside a morgue at the Dhaka Medical College Hospital during the autopsy on the bodies of suspected Islamic militants who were killed in Dhaka, Bangladesh. Police in Bangladesh, on Saturday, say they have killed three suspected militants, including one of two alleged masterminds of a major attack on a cafe last month that left 20 people dead. Top counterterrorism official Monirul Islam said police raided a two-story house in Narayanganj district near Dhaka and killed the suspects early Saturday. (Photo by AP Photo) 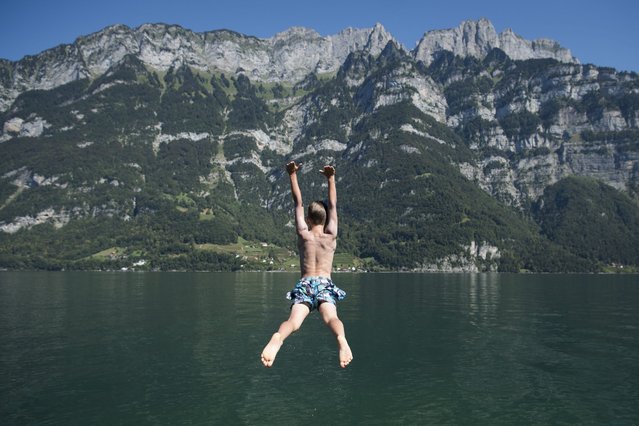 A boy jumps in the water of the Walensee lake at Murg, Switzerland, 27 August 2016. (Photo by Gian Ehrenzeller/EPA) 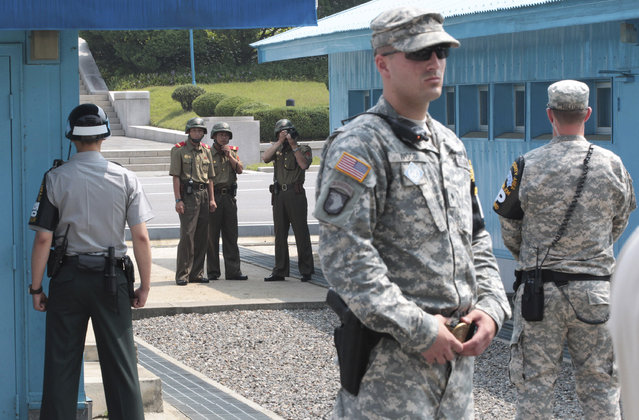 In this July 27, 2014 file photo, North Korean army soldiers watch the south side while a South Korean and United States Army soldiers stand guard at the border villages of Panmunjom in Paju, South Korea. North Korea has threatened on Saturday, August 27, 2016, to aim fire at the lighting equipment used by American and South Korean troops at a truce village inside the Demilitarized Zone that divides the two Korea. (Photo by Ahn Young-joon/AP Photo) 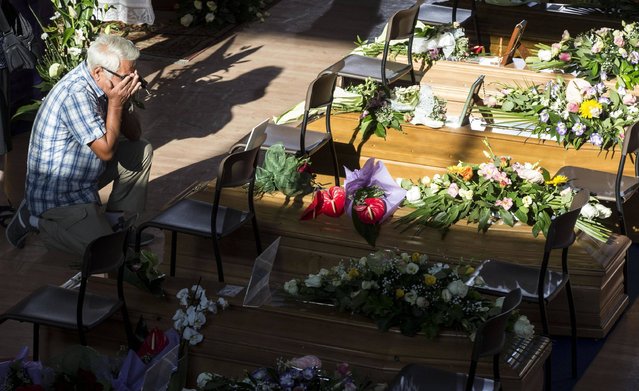 A man cries in front of a coffin, Saturday, August 27, 2016, before the start of the mass funerals in Ascoli Piceno, central Italy, for some of the victims of a major earthquake that devastated a large area in central Italy. Italian president Sergio Mattrella and Italian premier Matteo Renzi will attend the funerals. (Photo by Massimo Percossi/ANSA via AP Photo) 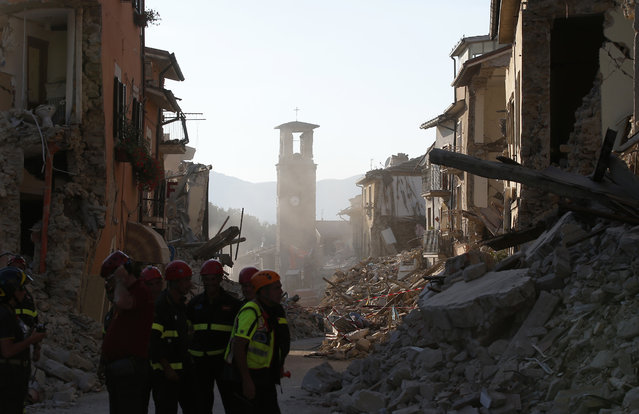 Firefighters work along the main street in Amatrice, central Italy, Saturday, August 27, 2016 where a 6.1 earthquake struck just after 3:30 a.m., Wednesday. As Italians observed a day of national mourning, President Sergio Mattarella and Premier Matteo Renzi joined grieving family members for a state funeral for some of the victims of Wednesday's quake. (Photo by Antonio Calanni/AP Photo) 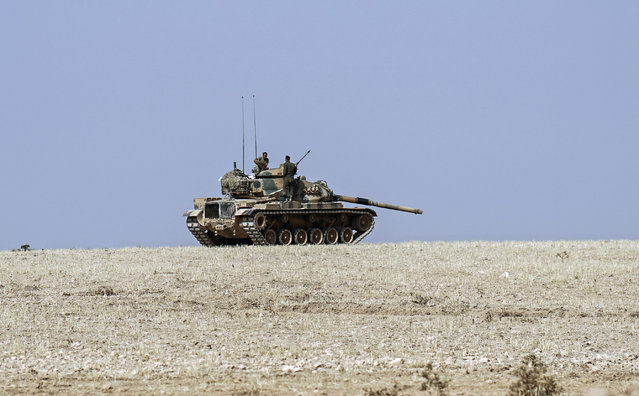 A Turkish army tank stationed overlooks the Syrian border, in Karkamis, Turkey, Saturday, August 27, 2016. Turkey on Wednesday sent tanks across the border to help Syrian rebels retake the key Islamic State-held town of Jarablus and to contain the expansion of Syria's Kurds in an area bordering Turkey. (Photo by Halit Onur Sandal/AP Photo) 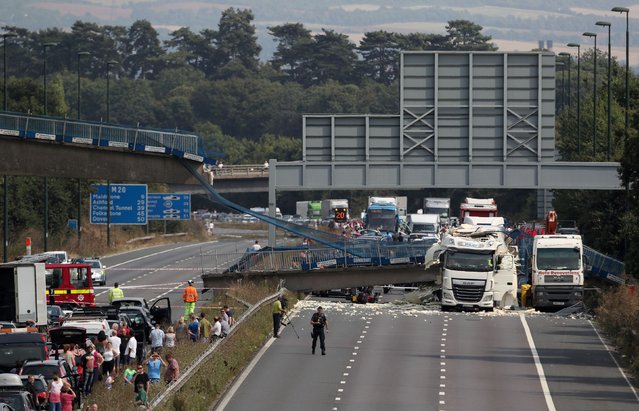 The scene on the London-bound M20 motorway, about 30 miles (48 kilometers) southeast of the capital, after a lorry hit a pedestrian bridge, causing it to collapse, Saturday August 27, 2016. Witnesses and emergency services say a truck has struck an overpass and collapsed a pedestrian bridge onto one of England's busiest motorways, the M20, injuring one person. (Photo by Steve Parsons/PA Wire via AP Photo) 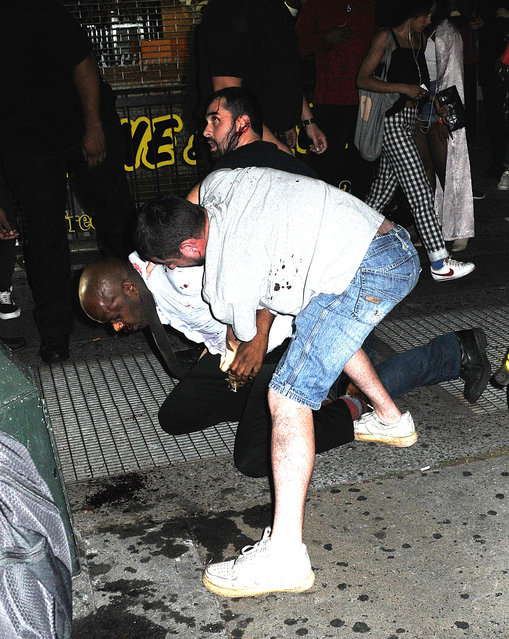 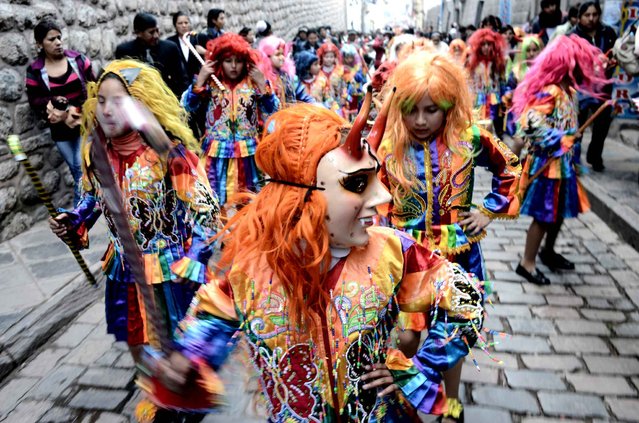 Girls parade during the Saint Rose of Lima -patroness of Peru- annual festival in Cusco, Peru on August 26, 2016. Saint Rose of Lima dedicated her life to caring for the sick and was the first person born in the Americas to be canonized by the Roman Catholic Church. (Photo by Goh Chai Hin/AFP Photo) 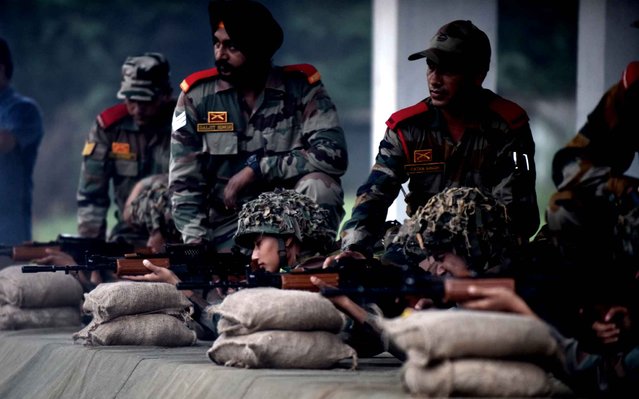 Indian cadets fire rifles as they take part in weapons training at an Officers Training Academy in Chennai on August 26, 2016, where India's President Pranab Mukherjee is scheduled to review a passing out parade of cadets on September 10. (Photo by Arun Sankar/AFP Photo) 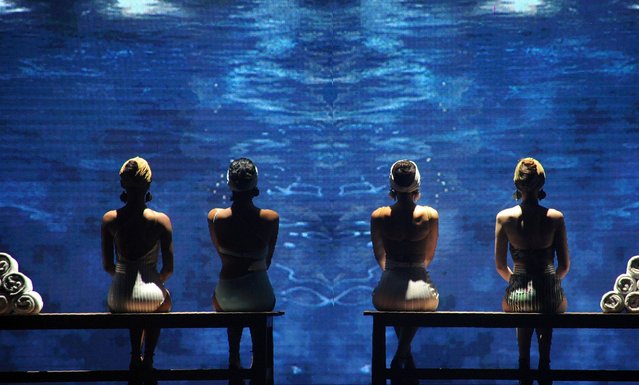