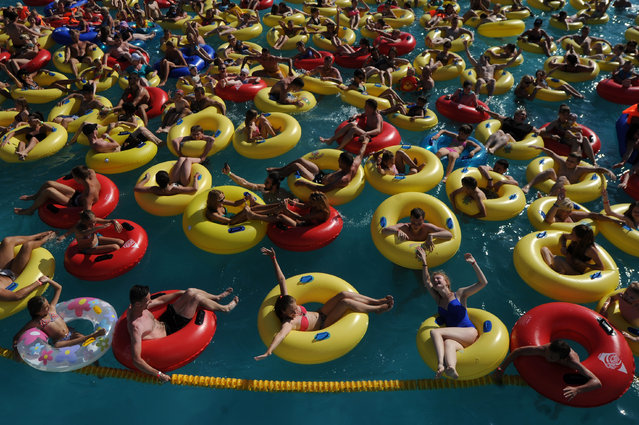 People cool off in a pool at an aqua park in Minsk, Belarus on August 1, 2017, as temperatures reached 30 degrees Celsius. (Photo by Sergei Gapon/AFP Photo) 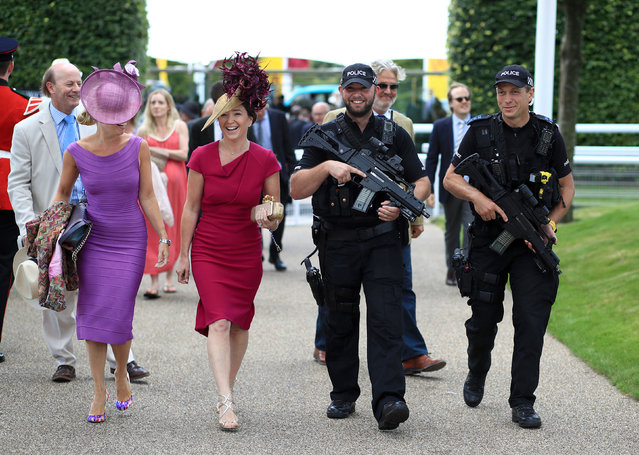 Two racegoers get an armed escort into the Goodwood festival on day one of the Qatar Goodwood Festival at Goodwood racecourse on August 1, 2017 in Chichester, England. (Photo by John Walton/PA Wire) 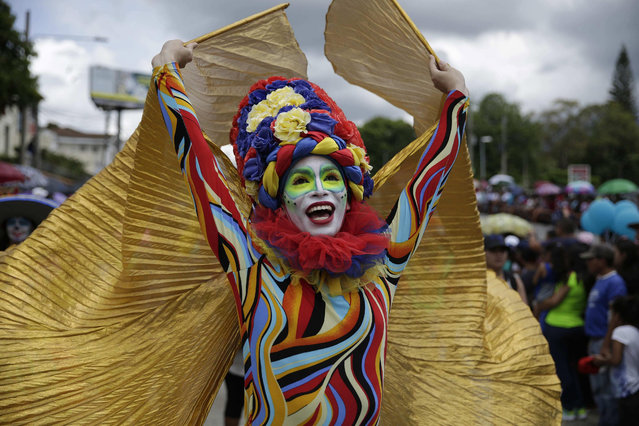 A view of the Desfile del Correo, with which thousands of people began the patron saint festivities, in San Salvador, El Salvador, 01 August 2017. The festivities in honor of the Divine Savior of the World, patron saint of San Salvador, are the most important in the country, where government activity is paralyzed on 01 August and 06, while the private sector activity is frozen on days 03, 05 and 06. The parade was led by San Salvador's Mayor, Nayib Bukele, who along the way threw candy to sspectators from a classic car. (Photo by Rodrigo Sura/EPA) 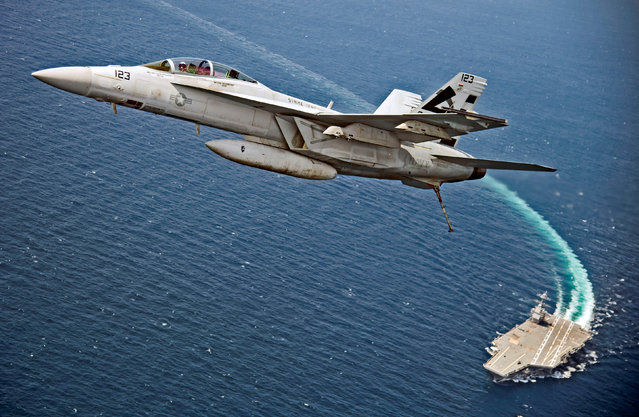 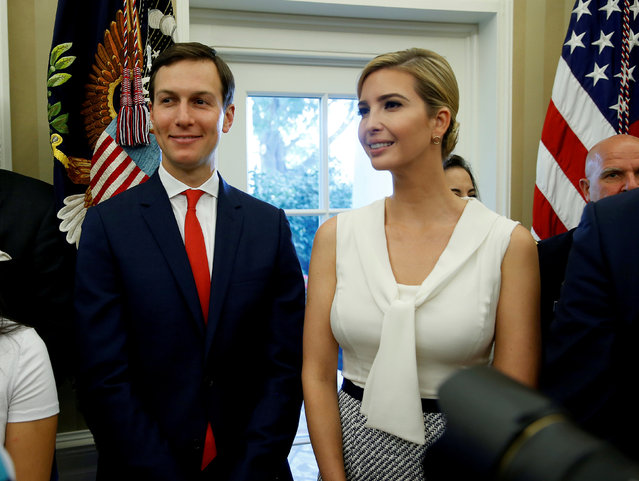 White House Senior Adviser Jared Kushner and Ivanka Trump stand together after John Kelly was sworn in as White House Chief of Staff in the Oval Office of the White House on July 31, 2017. (Photo by Joshua Roberts/Reuters) 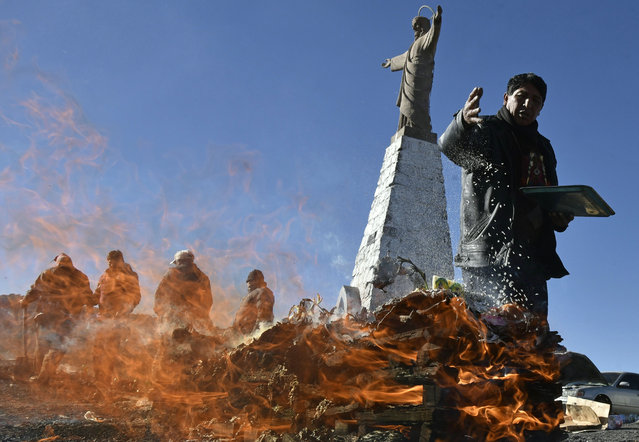 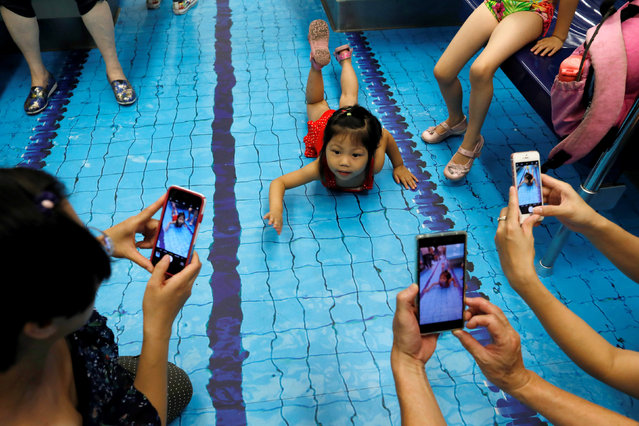 People take photo as a child poses at a sports-themed Mass Rapid Transit (MRT) train ahead of Summer Universiade, in Taipei, Taiwan on August 1, 2017. (Photo by Tyrone Siu/Reuters) 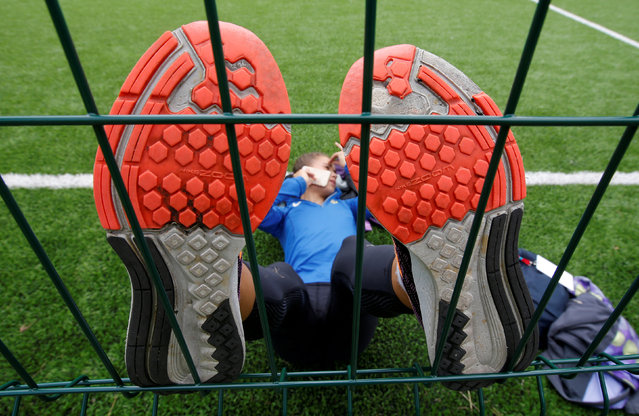 A Russian athlete speaks on a mobile phone as she warms up before competitions during the 2017 Russian Athletics Cup, at Meteor Stadium in Zhukovsky near Moscow, Russia on July 28, 2017. (Photo by Sergei Karpukhin/Reuters) 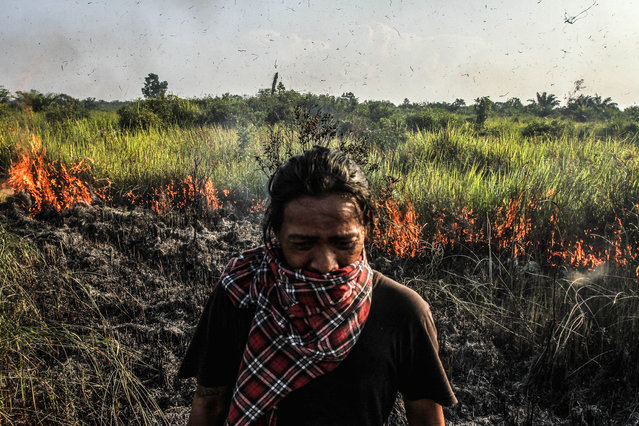 Villagers of Palas watch the fire burning forests and peat-lands on July 31, 2017 in Pekanbaru, Indonesia. The Indonesian Meteorology, Climatology and Geophysics Agency (BMKG) reported on July 31 that the agency detected 30 hot-spots indicating forest and peat-land fires in Riau Province scattered during the dry season while authorities set up measures to control forest fires. (Photo by Albert Damanik/Barcroft Images) 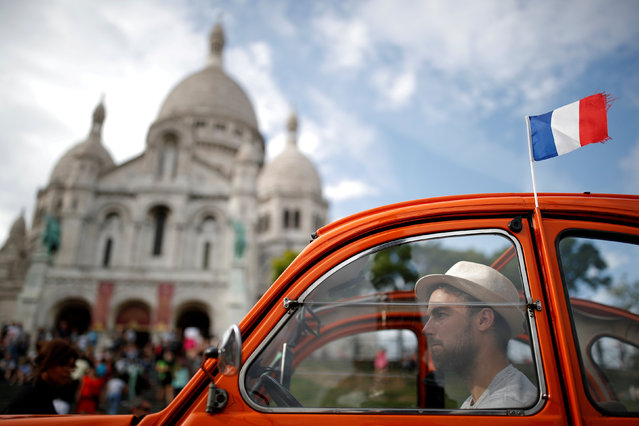 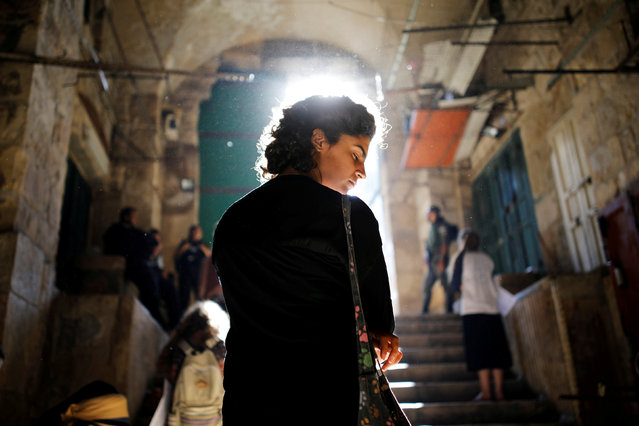 A Jewish worshipper prays in front of an entrance to the compound known to Muslims as Noble Sanctuary and to Jews as Temple Mount, on Tisha B'Av, a day of fasting and lament, in Jerusalem's Old City August 1, 2017. (Photo by Amir Cohen/Reuters) 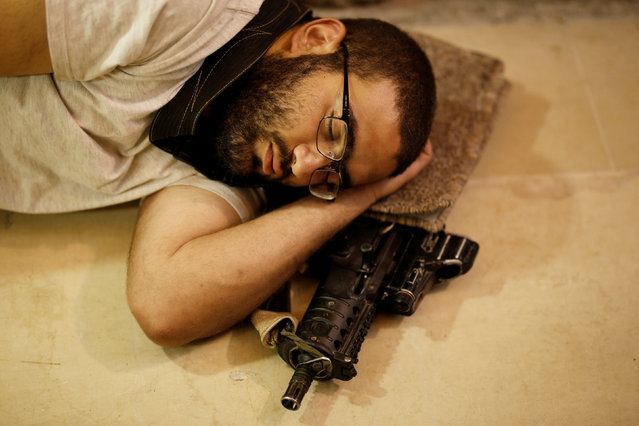 A Jewish worshipper sleeps next to his weapon near the Western Wall on Tisha B'Av, a day of fasting and lament, in Jerusalem's Old City August 1, 2017. (Photo by Amir Cohen/Reuters) 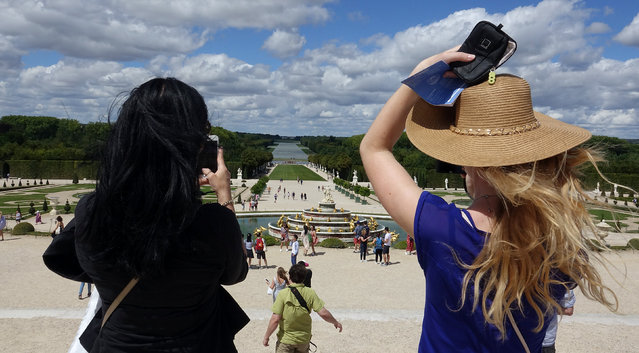 Tourists take pictures at the gardens of the Chateau de Versailles (Versailles Palace) in Versailles, near Paris, France July 30, 2017. (Photo by Stefano Rellandini/Reuters) 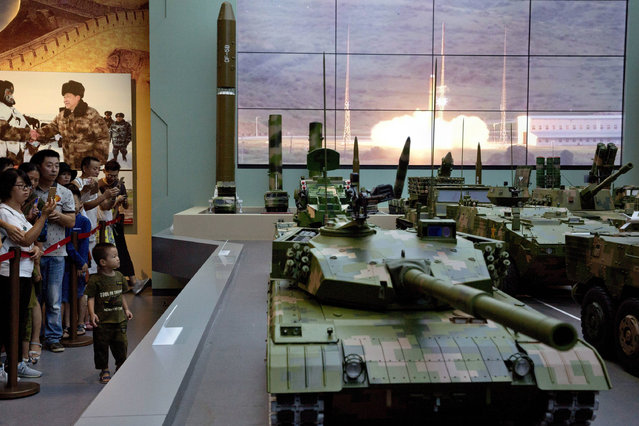 Visitors attend an exhibition to mark the 90th anniversary of the founding of the People's Liberation Army at the military museum in Beijing, China, Tuesday, August 1, 2017. Chinese President Xi Jinping issued a tough line on national sovereignty Tuesday amid multiple territorial disputes with his country's neighbors, saying China will never permit the loss of “any piece” of its land to outsiders. (Photo by Ng Han Guan/AP Photo) 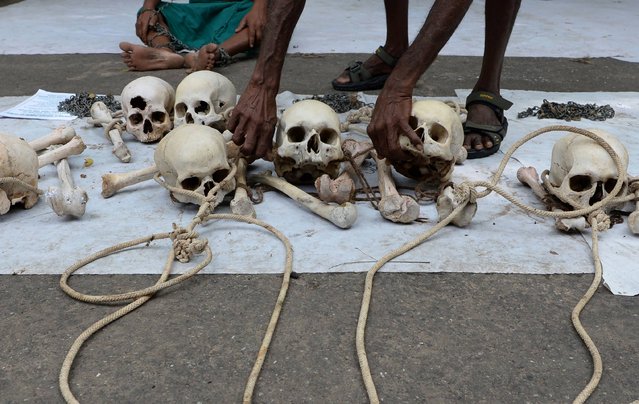 An Indian farmer from Tamil Nadu state arranges human skulls, said to belong to farmers who had committed suicide, during a protest in New Delhi on August 1, 2017. Farmers from Tamil Nadu are protesting in New Delhi with the bones of farmers who have committed suicide in the wake of a prolonged drought and rising amounts of debt, seeking action from the government including the write-off of bank loans and relief packages for drought affected areas. (Photo by Sajjad Hussain/AFP Photo) 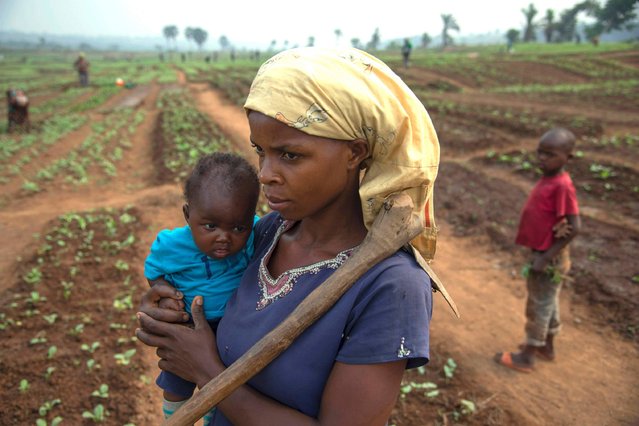 A Congolese woman and her child, who fled from rebel group attacks, stand in a field farmed with the help of the Food and Agricultural Organisation of the United Nations (FAO) in Tshikapa in the Kasai Region, Democratic Republic of Congo, on July 27, 2017. For the past nine months, Kasai, a deeply-impoverished region in central Democratic Republic of Congo, has been plagued by bloodshed that has killed over 3,000 people and forced 1.3 million to flee. The unrest has its roots in dispute between a local traditional leader, known as the Kamwina Nsapu, and the government of President Joseph Kabila which began in early 2016. (Photo by Junior D. Kannah/AFP Photo) 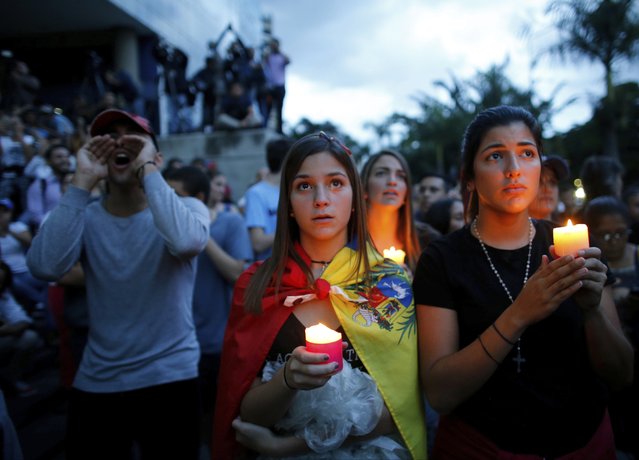 Anti-government demonstrators hold candles during a vigil in honor of those who have been killed during clashes between security forces and demonstrators in Caracas, Venezuela, Monday, July 31, 2017. Many analysts believe Sunday's vote for a newly elected assembly that will rewrite Venezuela’s constitution will catalyze yet more disturbances in a country that has seen four months of street protests in which at least 125 people have died. (Photo by Ariana Cubillos/AP Photo) 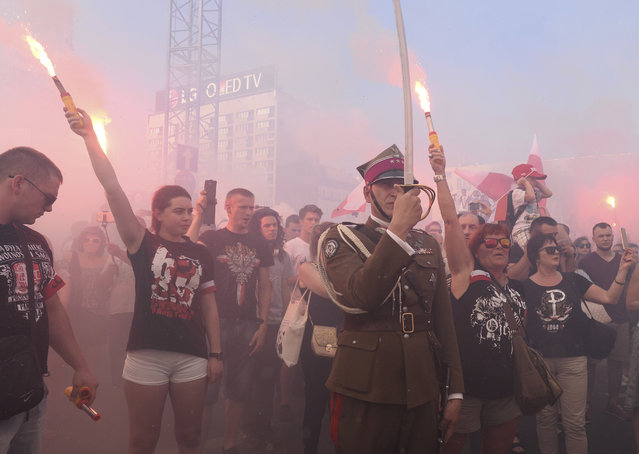 People stand on the city's main intersection holding burning flares to commemorate the 73rd anniversary of the 1944 Warsaw Uprising in Warsaw, Poland, Tuesday, August 1, 2017. Thousands of residents opened an uneven struggle on Aug. 1, 1944 in an effort to liberate the city from the Nazis and take control ahead of the advancing Soviet Red Army. (Photo by Alik Keplicz/AP Photo) 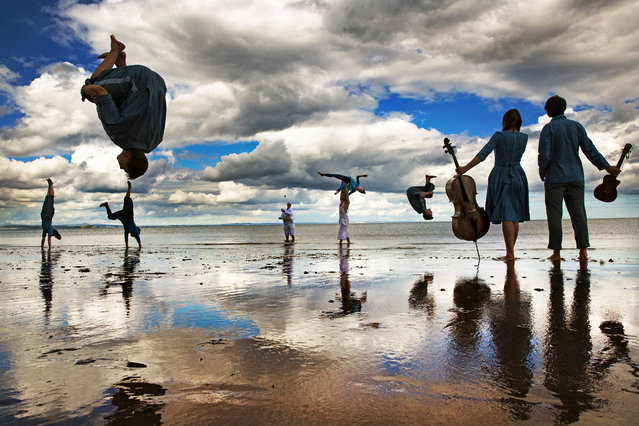 Meanwhile, over on Portobello beach, members of the Upsala circus take a stroll before their fringe debut, Ping-Pong Ball Effect in Edinburgh, England on August 1, 2017. (Photo by Murdo Macleod/The Guardian) 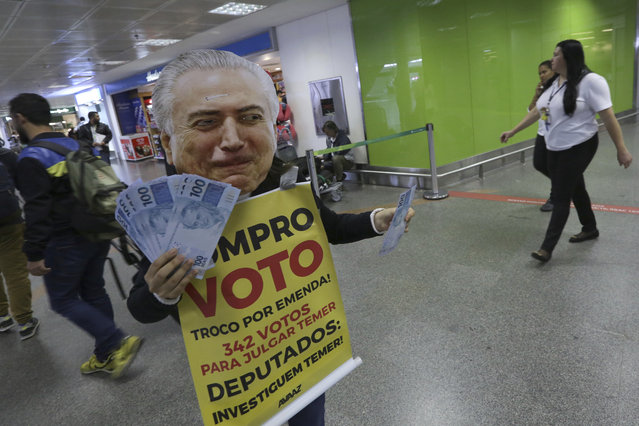 An activist protests, dressed with a mask of Brazil's President Michel Temer, as he holds fake 100 Brazilian Real notes and a sign that reads in Portuguese “I buy votes”, at the arrivals area of the airport in Brasilia, Brazil, Tuesday, August 1, 2017. Temer faces a congressional vote on his future Wednesday, a showdown coming in a month dreaded by leaders of Latin America's largest nation. (Photo by Eraldo Peres/AP Photo) 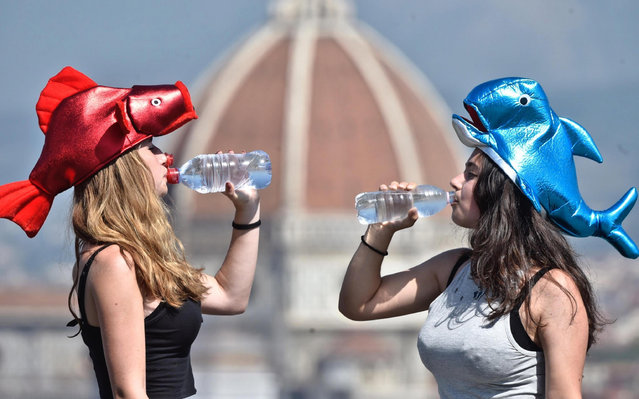 Two girls drink water with the background of Brunelleschi's dome of Florence cathedral during a heat wave in Florence, Italy, 01 August 2017. Temperatures are expected to reach 35-40 degrees Celsius (104F) during the day, according to weather reports. (Photo by Maurizio Degl'Innocenti/EPA) 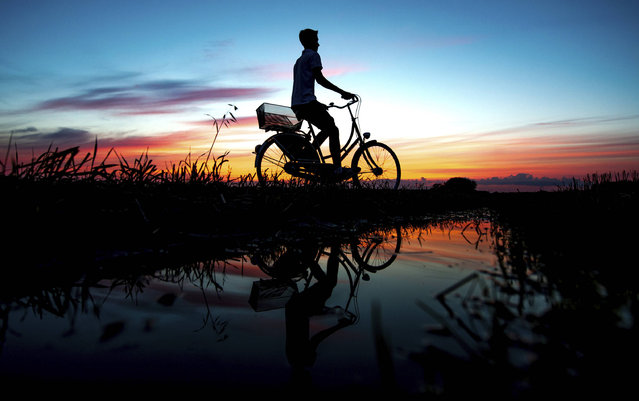