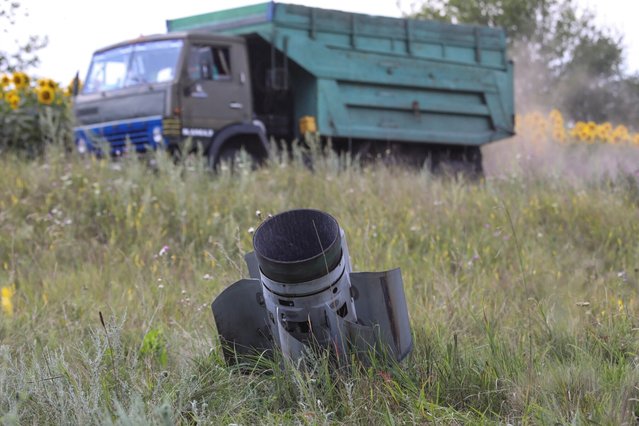 A truck loaded with wheat moves past an unexploded shell from multiple launch rocket system, as Russia's attack on Ukraine continues, in a field in Kharkiv Region, Ukraine on July 30, 2022. (Photo by Vyacheslav Madiyevskyy/Reuters) 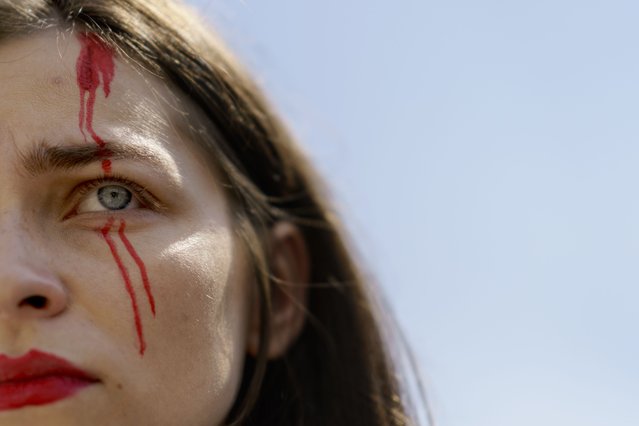 Olha Maliuchenko, the fiancé of a Ukrainian soldier from the Azov Regiment who was captured by Russia in May after the fall of Mariupol, wears paint depicting blood on her face during a rally in Kyiv, Ukraine, Saturday, July 30, 2022. The rally comes a day after Russian and Ukrainian officials blamed each other for the deaths of dozens of Ukrainian prisoners of war in an attack Friday on a prison in a separatist-controlled area of eastern Ukraine. Maliuchenko has no information on the well-being of her fiancé. (Photo by David Goldman/AP Photo) 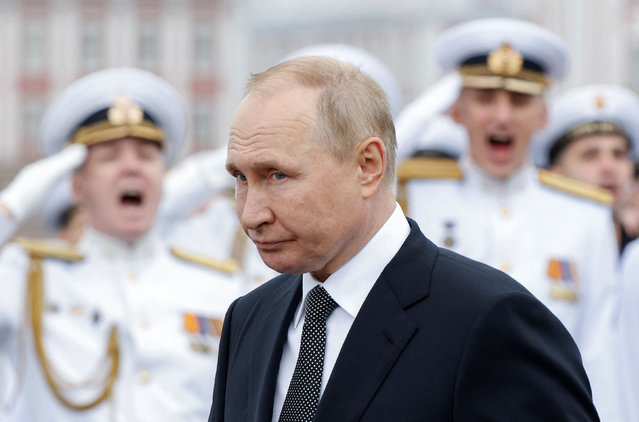 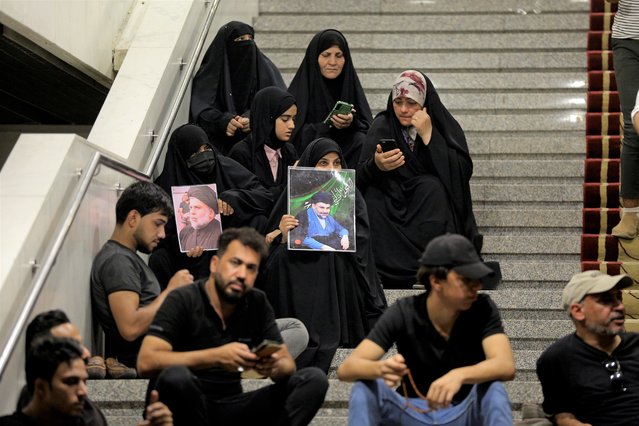 Followers of Shiite cleric Muqtada al-Sadr hold posters with his photo during a sit-in, inside the parliament in Baghdad, Iraq, Monday, August 1, 2022. The political rivals of al-Sadr whose followers stormed the parliament have declared their own counter-protest. The announcement on Monday stirred fear among Iraqis and caused security forces to erect concrete barriers leading to the heavily fortified Green Zone, home of the parliament building. (Photo by Anmar Khalil/AP Photo) 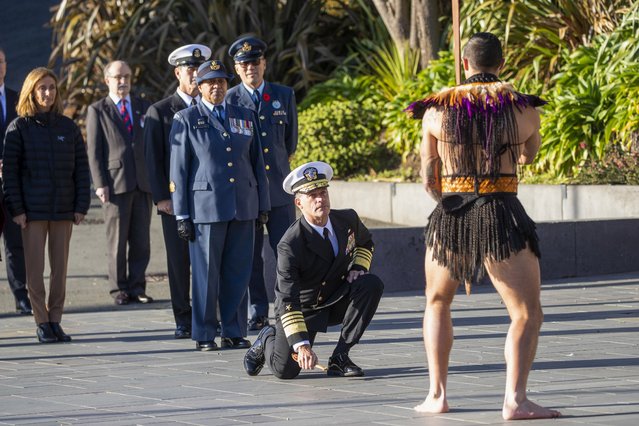 Admiral John Aquilino, commander of U.S. Indo-Pacific Command, accepts the challenge by Maori warriors during his powhiri (welcome) to the Pukeahu National War Memorial Park in Wellington, New Zealand, Monday, August 1, 2022. Admiral Aquilino is visiting Wellington as the U.S. is looking to increase its presence in the region amid deep concerns over China's growing ambitions in the Pacific. (Photo by Mark Mitchell/New Zealand Herald via AP Photo) 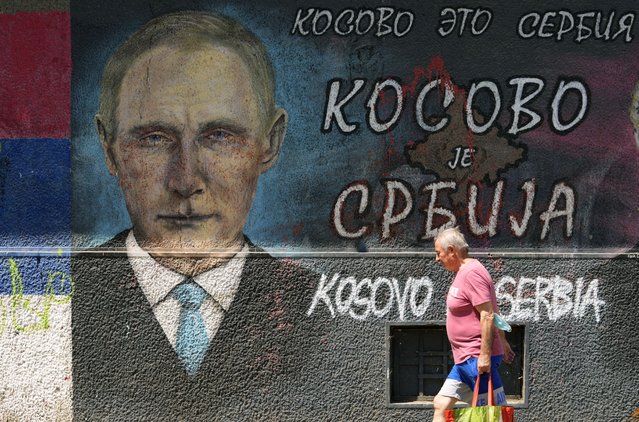 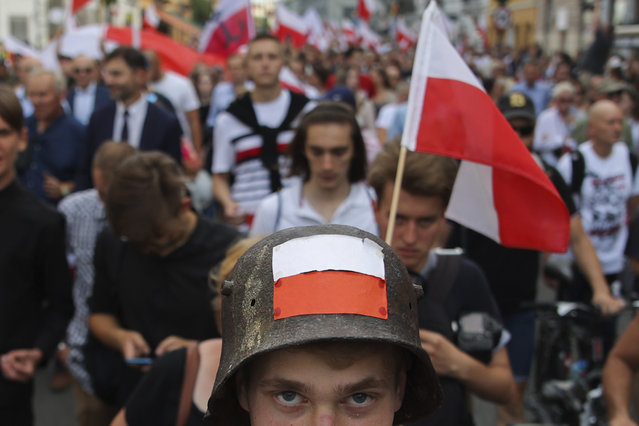 Supporters of the far-right organization National-Radical Camp, ONR, take part in the commemoration of the 1944 Warsaw Uprising, in Warsaw, Poland, Monday August 1, 2022. Poles are marking the 78th anniversary of the Warsaw Uprising, a doomed revolt against Nazi German forces during World War II. (Photo by Michal Dyjuk/AP Photo) 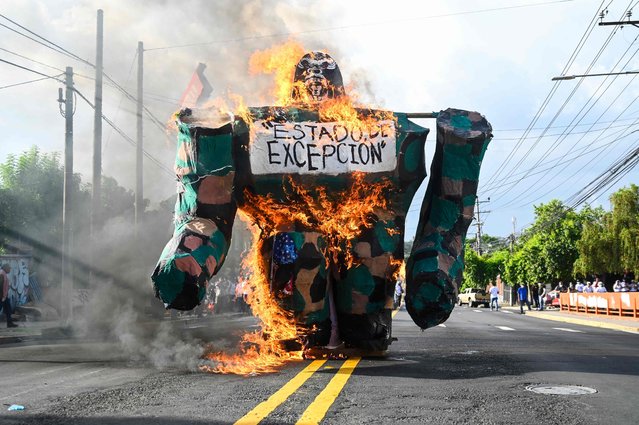 A burning gorrila with a sign reading “state of emergency” is seen during a demonstration commemorating the 47th anniversary of the massacre of university students on July 30, 1975 in San Salvador, on July 30, 2022. (Photo by Sthanly Estrada/AFP Photo) 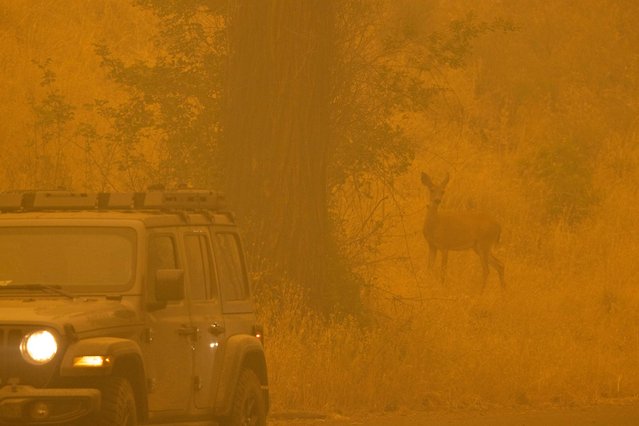 A deer walks through smoke in the community of Klamath River, which burned in the McKinney Fire in Klamath National Forest, northwest of Yreka, California, on July 31, 2022. Fueled by drought in a changing climate, the fire grew to over 50,000 acres in less than 48 hours. (Photo by David McNew/AFP Photo) 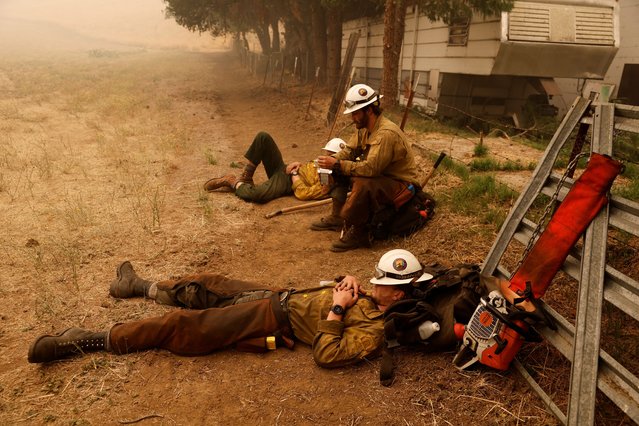 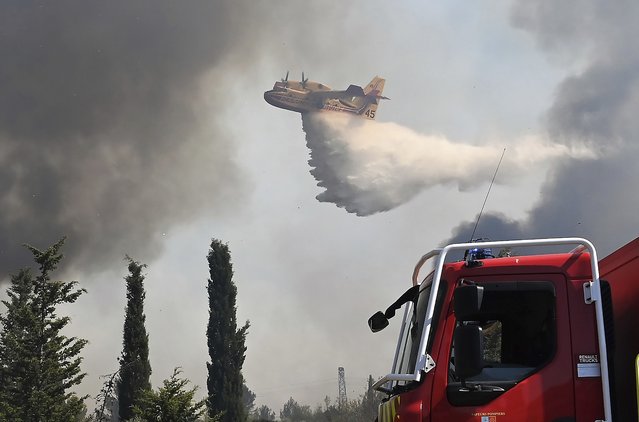 This photo provided by the fire brigade of the Gard region (SDIS 30) shows a water-bombing plane spreads water at a forest fire in Aubais, southern France, July 31, 2022. A weekend wildfire in the southern French Gard region that injured four firefighters has now been contained. Firefighter spokesman Colonel Eric Agrinier told French media that 370 hectares were burned and two homes affected by the flames. (Photo by SDIS 30 service audiovisuel via AP Photo) 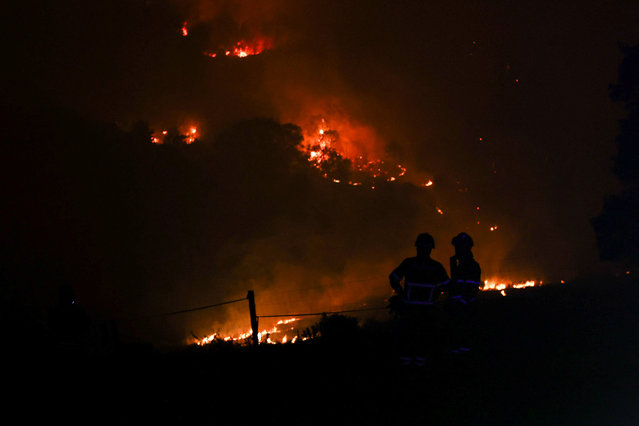 Firefighters patrol a burned area from a wildfire in Venda do Pinheiro in Mafra, Portugal, July 31, 2022. (Photo by Pedro Nunes/Reuters) 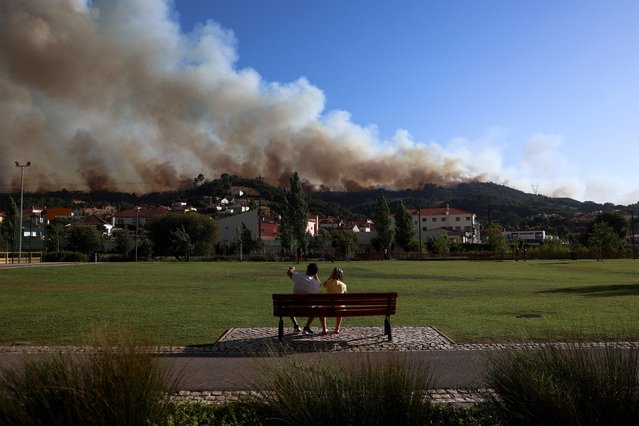 People watch as smoke rises from a wildfire in Venda do Pinheiro, Mafra, Portugal, July 31, 2022. (Photo by Pedro Nunes/Reuters) 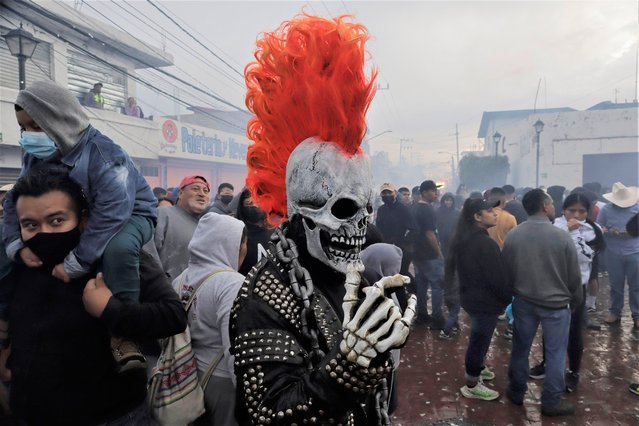 The Burning of the Bulls and Fair of Lights took place in Zapotitlan, part of the celebrations of the Day of Santiago Apostle on July 31, 2022 in Mexico City, Mexico. (Photo credit should read Gerardo Vieyra/ Eyepix Group/Future Publishing via Getty Images) 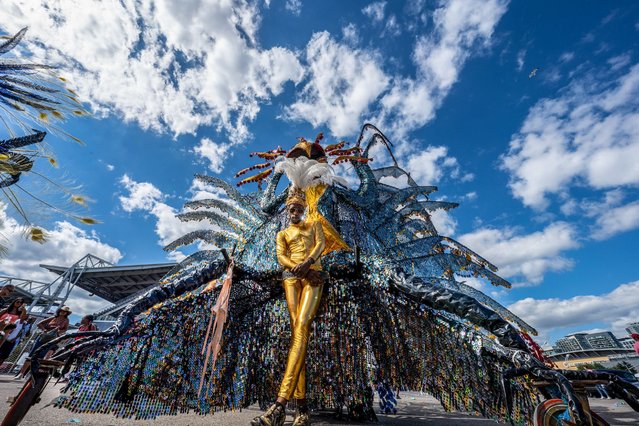 A parade participant dressed in gold clothing pulls along a large peacock-shaped float behind him during the festival in Exhibition Place in Toronto, Canada on July 30, 2022. Following two years of lockdown from the covid-19 pandemic, the Toronto Caribbean Carnival returns with the Grand Parade. (Photo by Katherine Cheng/SOPA Images/LightRocket via Getty Images) 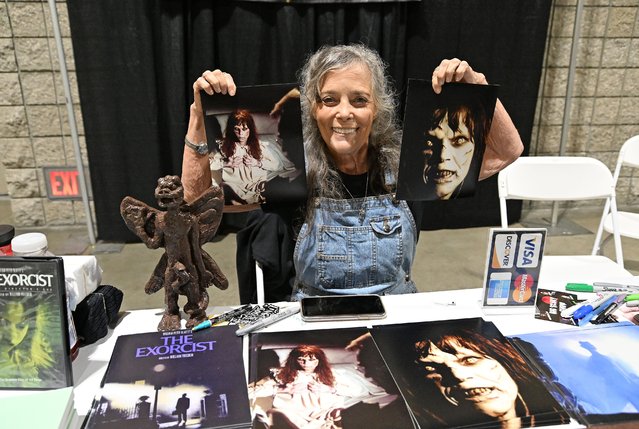 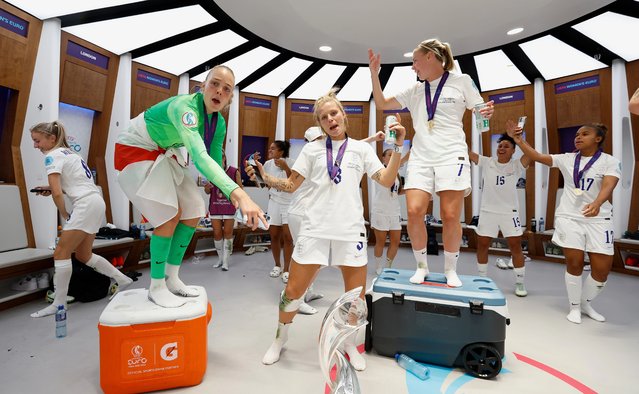 (L-R) Ellie Roebuck, Rachel Daly and Beth Mead of England celebrate in the changing room with the Women's EURO 2022 Trophy after the UEFA Women's Euro 2022 final match between England and Germany at Wembley Stadium on July 31, 2022 in London, England. (Photo by Lynne Cameron – The FA/The FA via Getty Images) 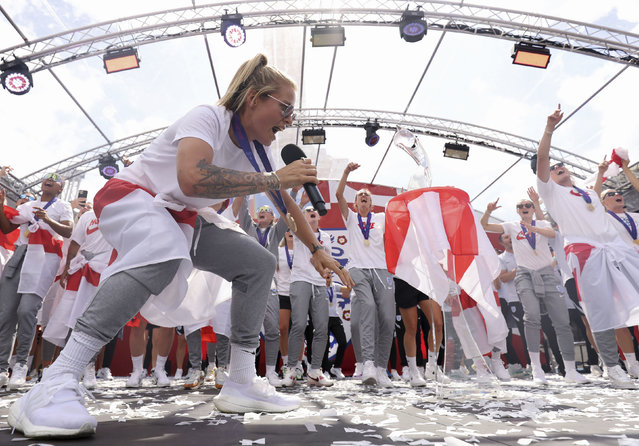 England players celebrate on stage at an event at Trafalgar Square in London, Monday, August 1, 2022. England beat Germany 2-1 and won the final of the Women's Euro 2022 on Sunday. (Photo by James Manning/PA Wire via AP Photo) 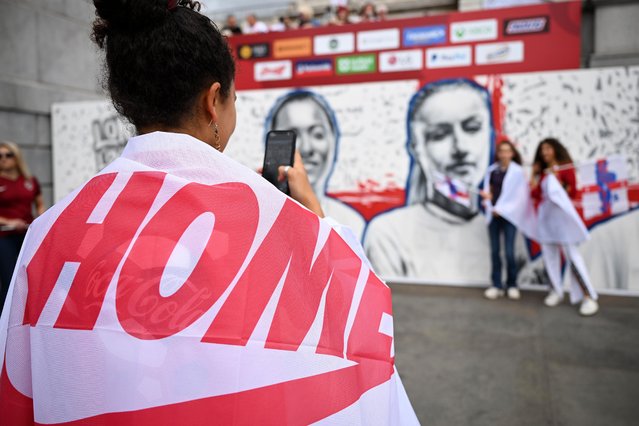 A Fan of England takes a photograph of friends in front of a mural of Fran Kirby and Leah Williamson (not pictured), whilst wearing a Nike Coming Home Flag, during the England Women's Team Celebration at Trafalgar Square on August 01, 2022 in London, England. The England Women's Football team beat Germany 2-1 in the Final of The UEFA European Women's Championship last night at Wembley Stadium. (Photo by Leon Neal/Getty Images)
Edit Del
02 Aug 2022 05:41:00, post received 0 comments
Publication archive:
←   →
Popular tags:
All tags
Last searches: