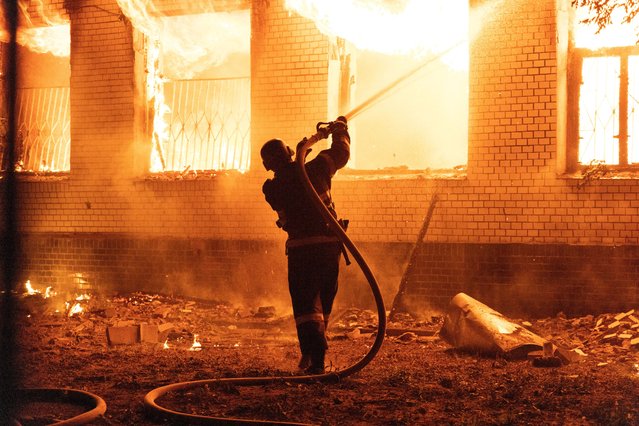 A firefighter extinguishes a burning hospital building hit by a Russian missile strike, as Russia's attack on Ukraine continues, in Mykolaiv, Ukraine on August 1, 2022. (Photo by Stanislav Kozliuk/Reuters) 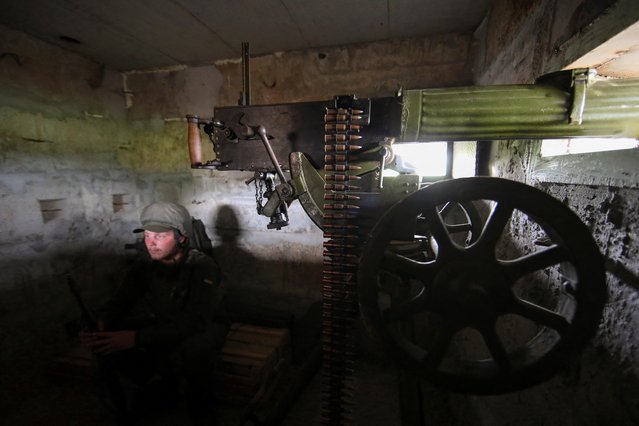 A member of the Ukrainian National Guard sits near a Maxim machine gun at a position near a front line in Kharkiv region, as Russia's attack on Ukraine continues, Ukraine on August 3, 2022. (Photo by Vyacheslav Madiyevskyy/Reuters) 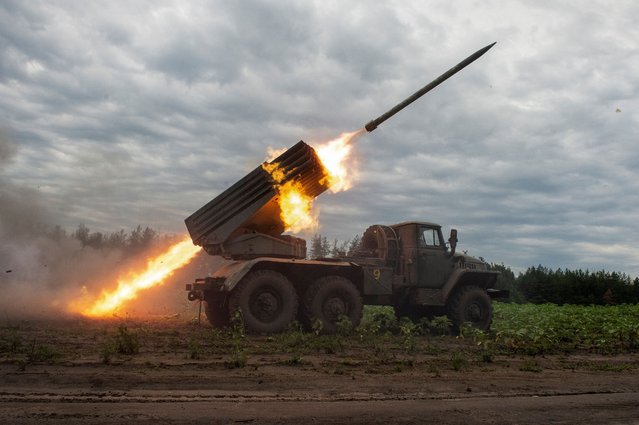 Ukrainian servicemen fire with a BM21 Grad multiple launch rocket system in a frontline in Kharkiv region, as Russia's attack on Ukraine continues, Ukraine on August 2, 2022. (Photo by Sofiia Gatilova/Reuters) 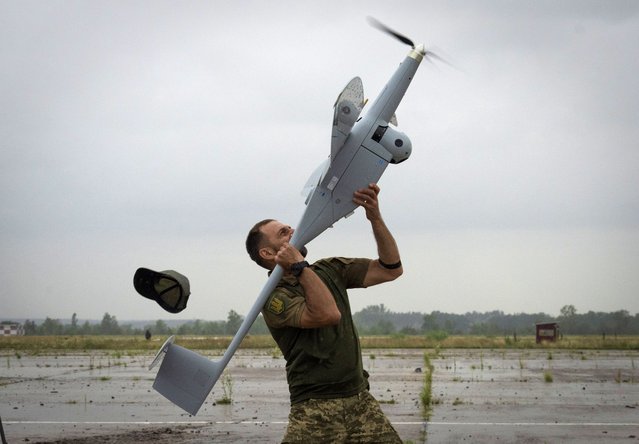 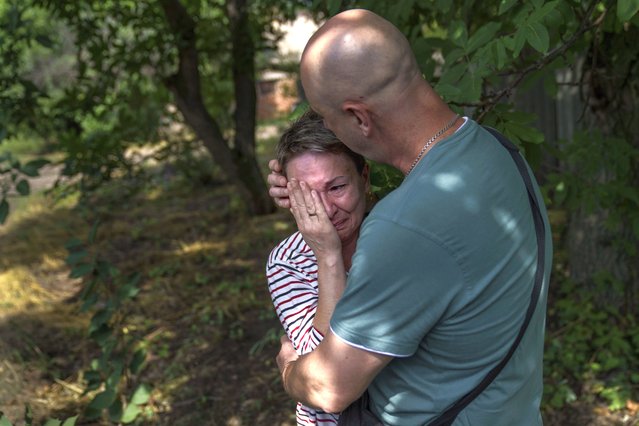 Marina Havrysh, left, is comforted by her husband, Vadim, as she weeps while watching her elderly parents helped into a van to be evacuated to a safer part of the country in the west from their home in Kramatorsk, Donetsk region, eastern Ukraine, Tuesday, August 2, 2022. “I understand that this will be the last time I ever see them”, she said. “You see their age, I can't give them the proper care”. (Photo by David Goldman/AP Photo) 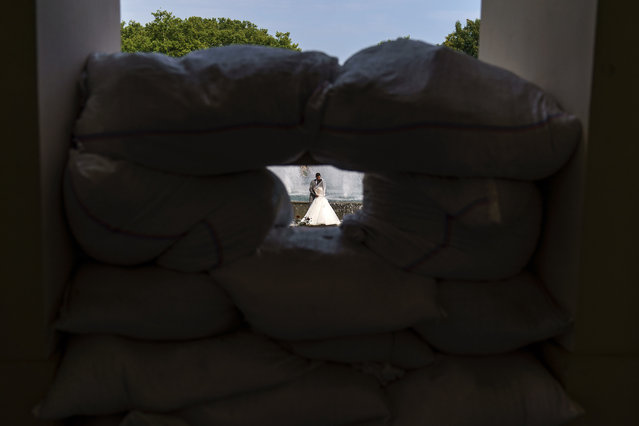 Maria and Oleh Berest embrace while posing for their photographer by a fountain on their wedding day as sandbags fortify the opera house in Odesa, Ukraine, Friday, July 29, 2022. (Photo by David Goldman/AP Photo) 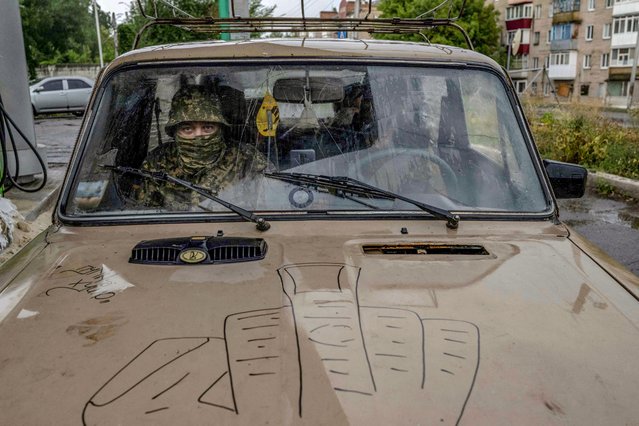 A Ukranian looks on as he sits in a car at a gas station during a rainy day in the city of Sloviansk, eastern Ukraine, on August 2, 2022, amid the Russian invasion of Ukraine. (Photo by Bulent Kilic/AFP Photo) 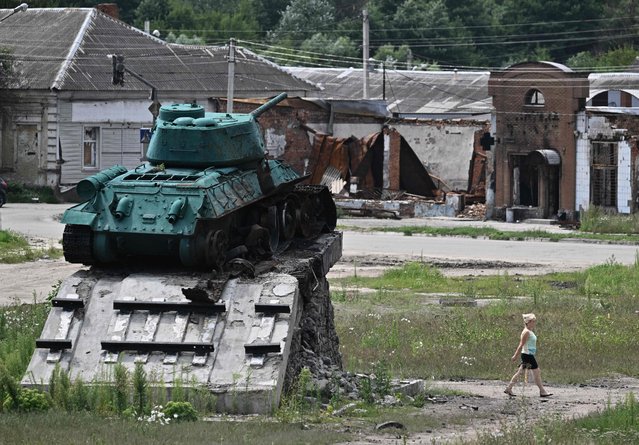 A woman walks past a damaged Soviet monument in the city of Trostyanets, Sumy region on August 1, 2022, amid the Russian invasion of Ukraine. (Photo by Genya Savilov/AFP Photo) 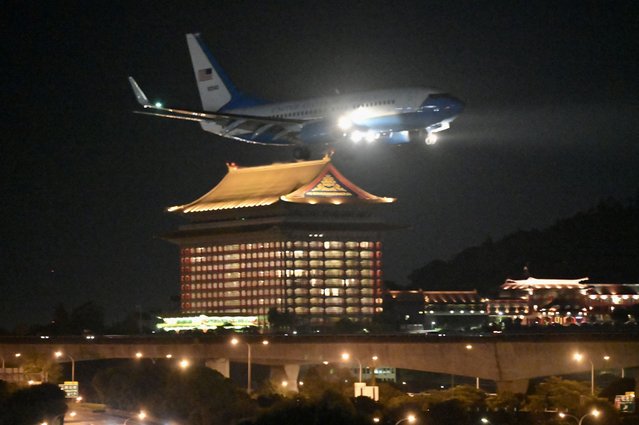 A US military aircraft with US House Speaker Nancy Pelosi on board prepares to land at Songshan Airport in Taipei on August 2, 2022. Pelosi landed in Taiwan on August 2 evening, defying days of increasingly stark warnings from China that have sent tensions between the world's two superpowers soaring. (Photo by Sam Yeh/AFP Photo) 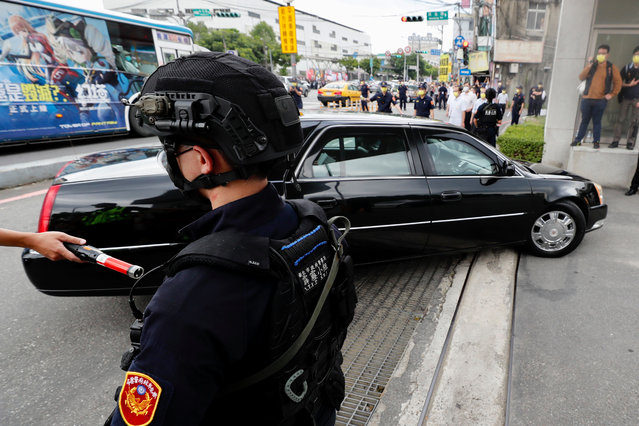 Taiwanese SWAT operatives stand next to the vehicle of US House Speaker Nancy Pelosi as it drives past to Jingmei Human Rights Cultural Park in Taipei, Taiwan, 03 August 2022. Pelosi, the highest ranking US official to visit the island in 25 years, began her visit in Taiwan despite strong warnings of military action from China against the visit. (Photo by Ritchie B. Tongo/EPA/EFE) 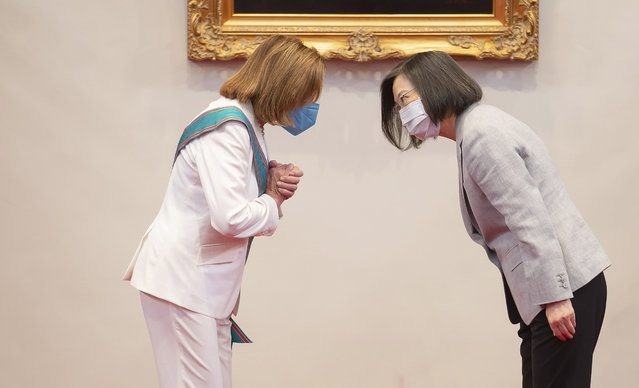 In this photo released by the Taiwan Presidential Office, U.S. House Speaker Nancy Pelosi, left, and Taiwanese President President Tsai Ing-wen gesture during a meeting in Taipei, Taiwan, Wednesday, August 3, 2022. U.S. House Speaker Nancy Pelosi, meeting top officials in Taiwan despite warnings from China, said Wednesday that she and other congressional leaders in a visiting delegation are showing they will not abandon their commitment to the self-governing island. (Photo by Taiwan Presidential Office via AP Photo) 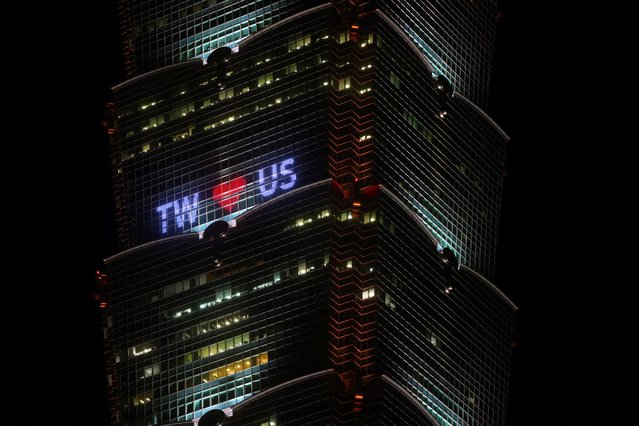 A pro-U.S. sign is displayed on a tower ahead of U.S. House of Representatives Speaker Nancy Pelosi's expected visit, in Taipei, Taiwan on August 2, 2022. (Photo by Ann Wang/Reuters) 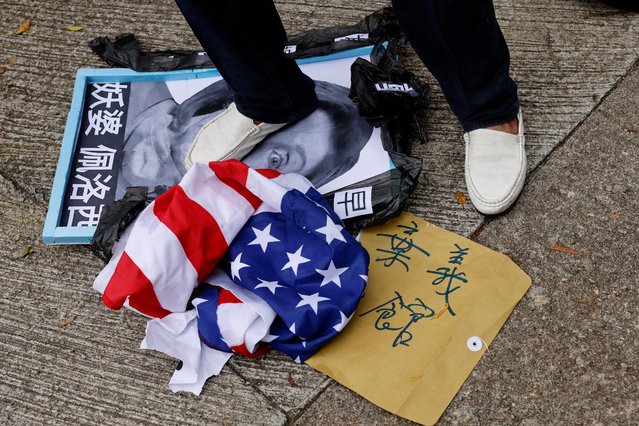 A pro-China supporter steps on a defaced photo of U.S. House of Representatives Speaker Nancy Pelosi during a protest against her visit to Taiwan outside the Consulate General of the United States in Hong Kong, China on August 3, 2022. (Photo by Tyrone Siu/Reuters) 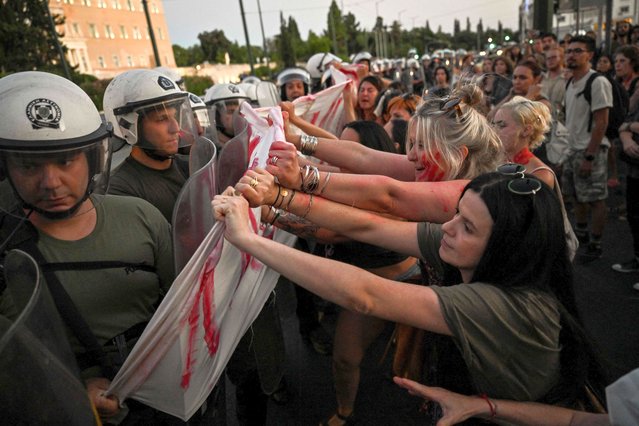 Women clash with Greek policement in front of the Greek parliament as they demonstrate following reports on the third femicide in the last 48 hours in the country, rising the number to 15 women killed by their husbands or boyfriends in the last 7 months, in central Athens on August 2, 2022. Protesters demand immediate actions for protection of the women reporting an abuse and better judiciary system. (Photo by Louisa Gouliamaki/AFP Photo) 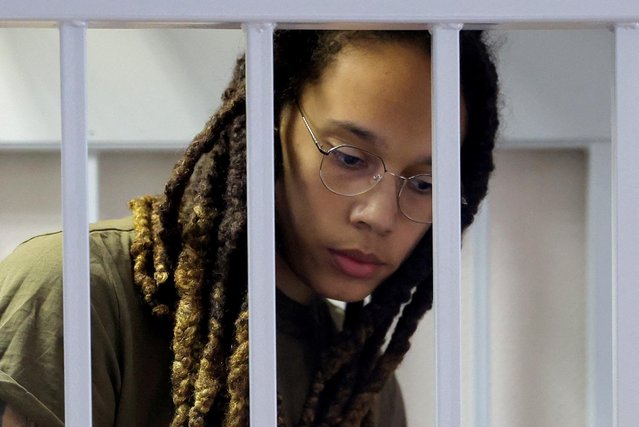 US basketball player Brittney Griner stands in a defendants' cage before a court hearing during her trial on charges of drug smuggling, in Khimki, outside Moscow on August 2, 2022. Griner was detained at Moscow's Sheremetyevo airport in February 2022 just days before Moscow launched its offensive in Ukraine. She was charged with drug smuggling for possessing vape cartridges with cannabis oil. Speaking at the trial on July 27, Griner said she still did not know how the cartridges ended up in her bag. (Photo by Evgenia Novozhenina/Pool via AFP Photo) 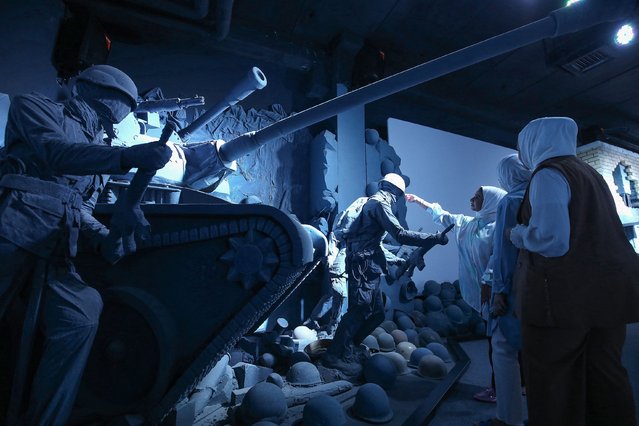 Kuwaitis visit the Martyr's Museum at the Martyr's Office headquarters in Kuwait City on August 2, 2022, on the 32nd anniversary of the 1990 Iraqi invasion of Kuwait. (Photo by Yasser Al-Zayyat/AFP Photo) 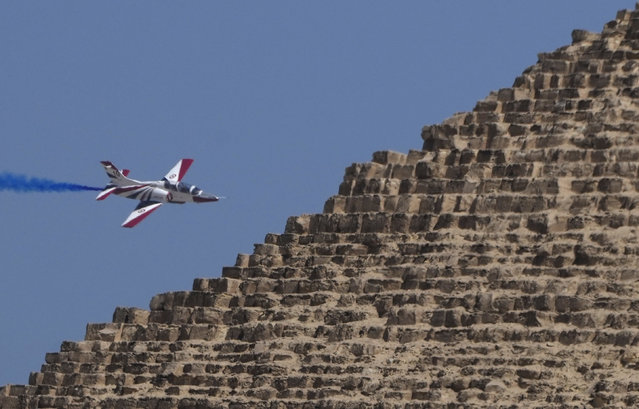 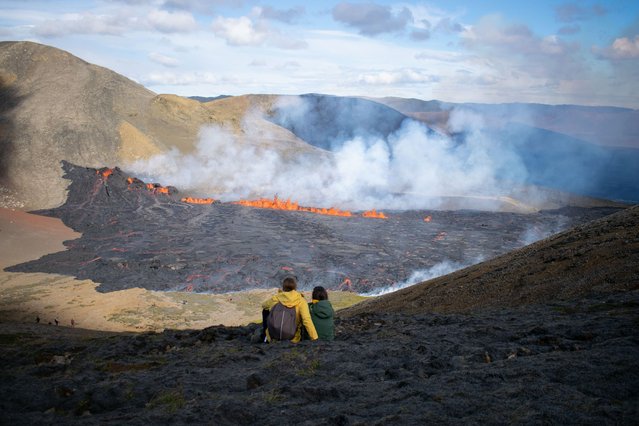 People look at the lava flowing at the scene of the newly erupted volcano at Grindavik, Iceland on August 3, 2022. A volcano erupted on August 3, 2022 in Iceland in a fissure near Reykjavik, the Icelandic Meteorological Office (IMO) said as lava could be seen spewing out of the ground in live images on local media. The eruption was some 40 kilometres (25 miles) from Reykjavik, near the site of the Mount Fagradalsfjall volcano that erupted for six months in March-September 2021, mesmerising tourists and spectators who flocked to the scene. (Photo by Jeremie Richard/AFP Photo) 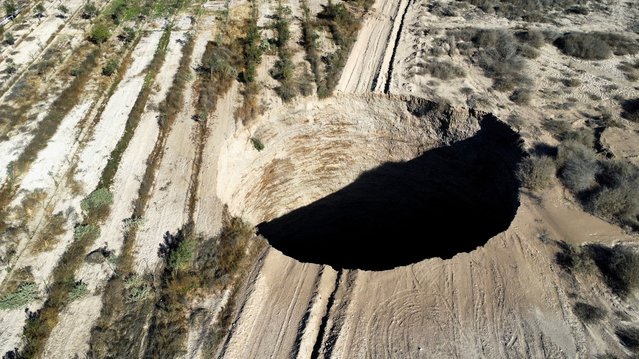 A sinkhole is exposed at a mining zone close to Tierra Amarilla town, in Copiapo, Chile on August 1, 2022. (Photo by Johan Godoy/Reuters) 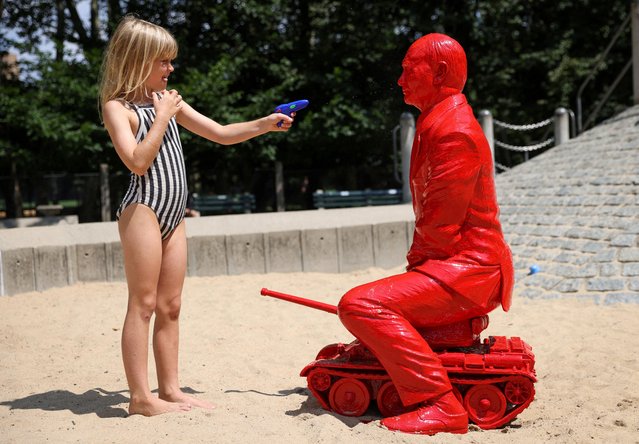 A child points a water pistol at a statue of Russian President Vladimir Putin riding a tank by French artist James Colomina in a playground in Central Park in Manhattan, New York City, U.S., August 2, 2022. (Photo by Andrew Kelly/Reuters) 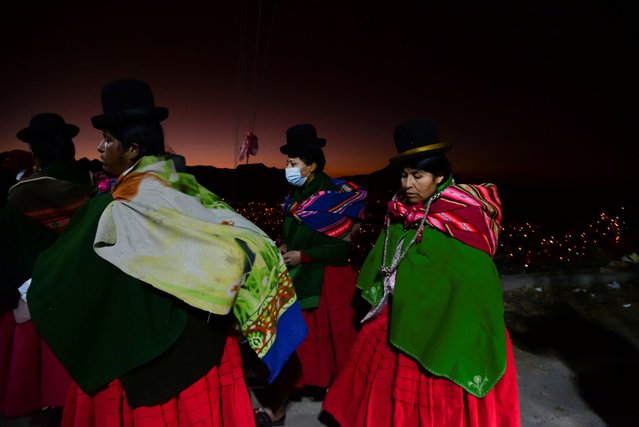 People gather to make an offering in honor of Pachamama, the goddess of earth and fertility, on Mother Earth Day, in El Alto, Bolivia, August 1, 2022. (Photo by Claudia Morales/Reuters) 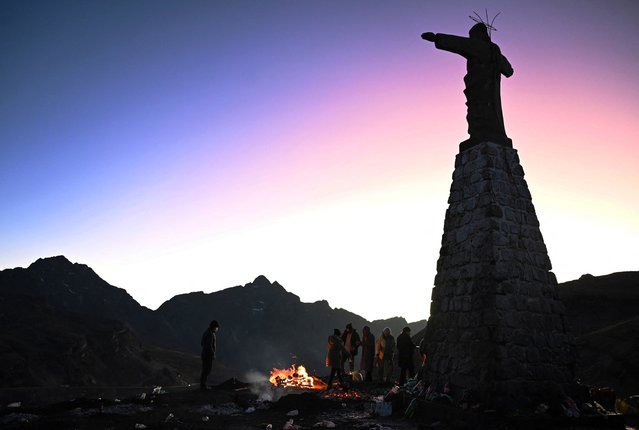 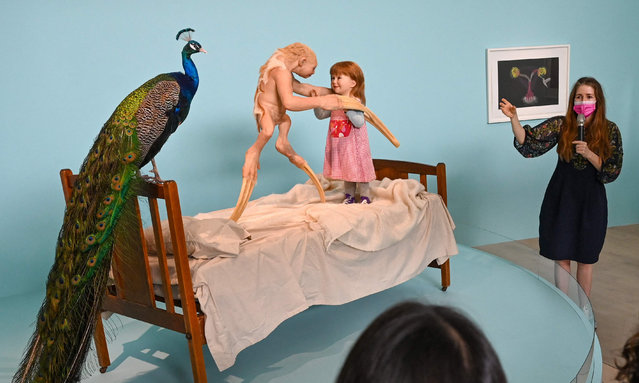 Australian artist Patricia Piccinini speaks during the press presentation of her exhibition at the ArtScience Museum in Singapore on August 2, 2022. The exhibition “Patricia Piccinini: We are Connected” features unique and bizarre hyperrealistic sculptures of animal-human hybrids. (Photo by Roslan Rahman/AFP Photo) 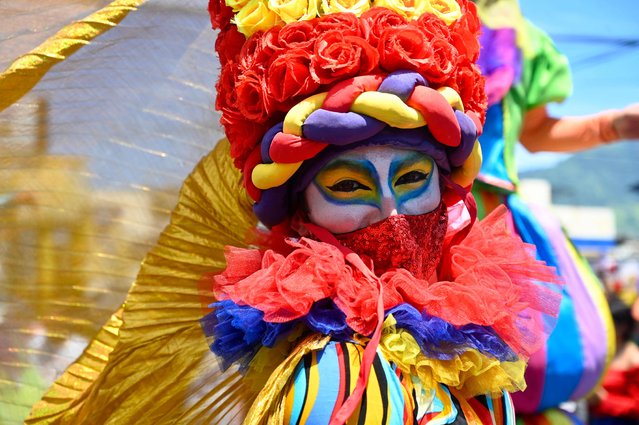 A clown marches during the traditional mail parade, which marks the beginning of the festivity in honour of the Divine Saviour of the World in San Salvador, on August 1, 2022. (Photo by Sthanly Estrada/AFP Photo) 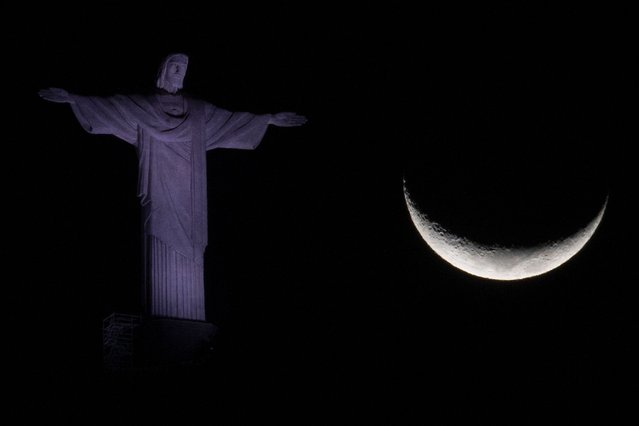 The crescent moon is seen next to the Christ The Redeemer statue in Rio de Janeiro, Brazil, on August 1, 2022. (Photo by Mauro Pimentel/AFP Photo) 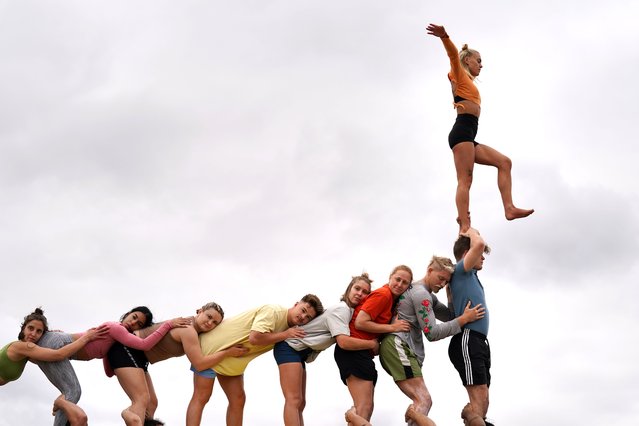 Performers from contemporary circus company Gravity & Other Myths during the launch the 75th Edinburgh International Festival at Murrayfield Stadium in Edinburgh on Wednesday, August 3, 2022. (Photo by Andrew Milligan/PA Images via Getty Images) 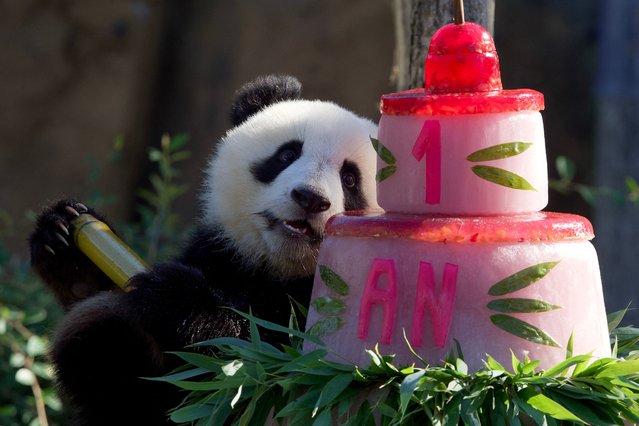