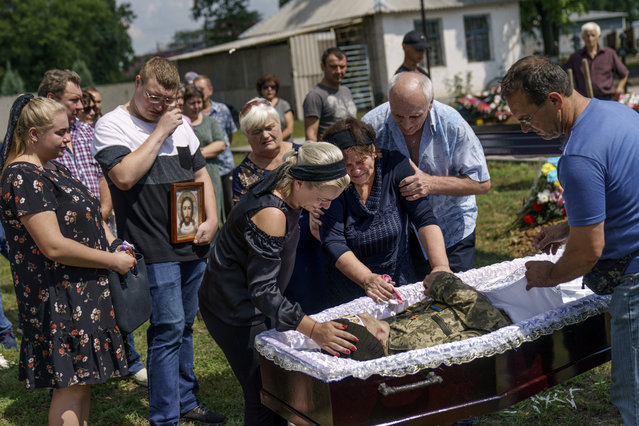 Lilia Panchenko is pulled away by her husband, Anatolii, right, as she says her final goodbye to their son, Oleh, along with his daughter, Ruslana, left, before his casket is covered during his burial service in Pokrovsk, Donetsk region, eastern Ukraine, Thursday, August 4, 2022. Ukrainian soldier Oleh Panchenko, 48, was killed July 27 by Russian forces fighting in the Donetsk region. (Photo by David Goldman/AP Photo) 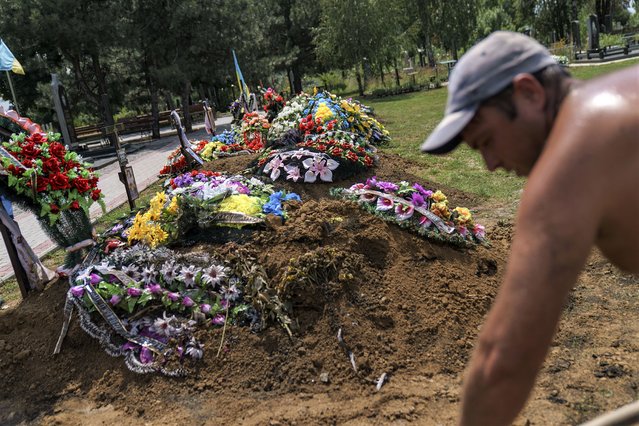 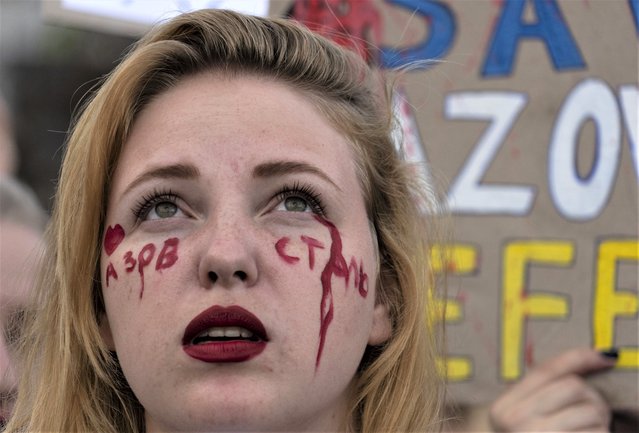 A relative with the writing “Above Steel” on her face attends a rally in support of Ukrainian soldiers from the Azov Regiment who were captured by Russia in May after the fall of Mariupol, in Kyiv, Ukraine, Thursday, August 4, 2022. The rally comes as U.S. officials believe Russia is working to fabricate evidence concerning last week's deadly strike on a prison housing prisoners of war in a separatist region of eastern Ukraine. (Photo by Efrem Lukatsky/AP Photo) 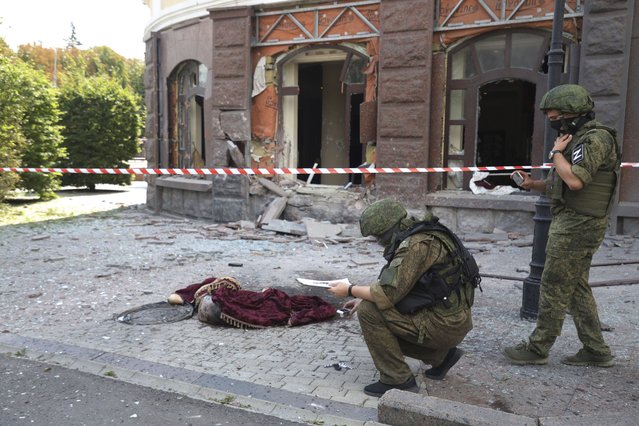 Investigative committee officers inspect an area of shelling as a lifeless body lies covered on the ground, in Donetsk, which is under control of the Government of the Donetsk People's Republic, eastern Ukraine, Thursday, August 4, 2022. (Photo by AP Photo) 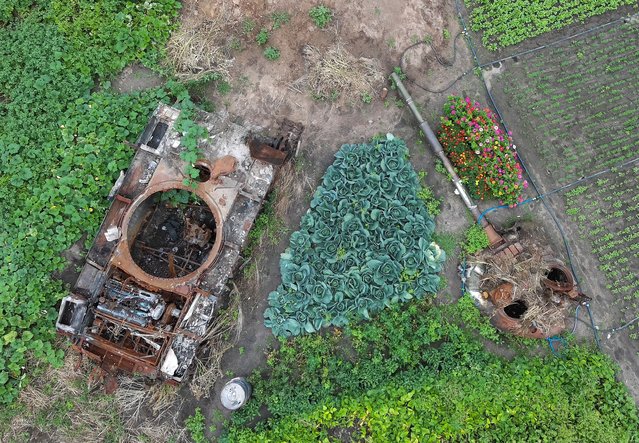 An aerial photo made from a drone shows vegetables grow around of the debris of a Russian tank at a garden in the village of Velyka Dymerka, Kyiv area, Ukraine, 04 August 2022. The wreckage of the tank remained in the garden after Russian troops were pushed out from the Kyiv region and locals planted flowers and vegetables between its debris. Velyka Dymerka as well as other towns and villages in the northern part of the Kyiv region, became battlefields, heavily shelled, causing death and damage when Russian troops tried to reach the Ukrainian capital of Kyiv in February and March 2022. (Photo by Sergey Dolzhenko/EPA/EFE/Rex Features/Shutterstock) 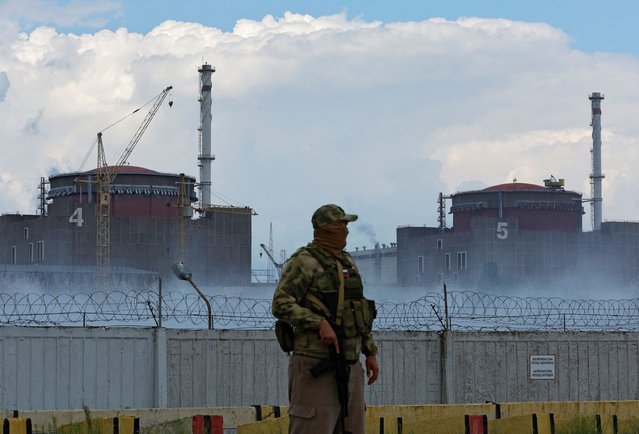 A serviceman with a Russian flag on his uniform stands guard near the Zaporizhzhia Nuclear Power Plant in the course of Ukraine-Russia conflict outside the Russian-controlled city of Enerhodar in the Zaporizhzhia region, Ukraine on August 4, 2022. (Photo by Alexander Ermochenko/Reuters) 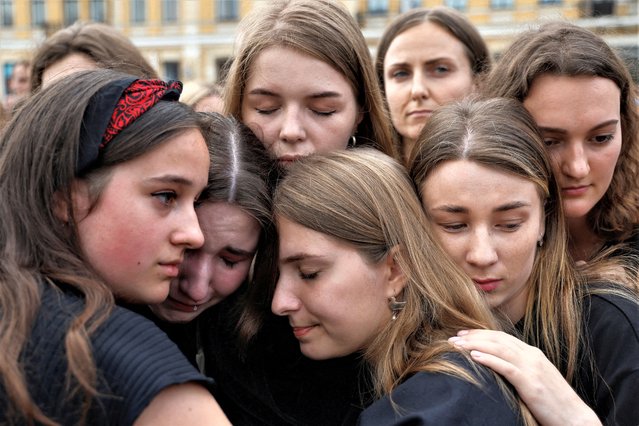 Women react during a rally of relatives and friends of defenders of the Azovstal Iron and Steel Works in Mariupol, demanding to recognise Russia as a state sponsor of terrorism after killing Ukrainian prisoners of war (POWs) in a prison in Olenivka, outside of Donetsk, as Russia's attack on Ukraine continues, in Kyiv, Ukraine on August 4, 2022. (Photo by Valentyn Ogirenko/Reuters)

A customer and a staff member watch a news report on the recent tensions between China and Taiwan, at a beauty salon in Taipei, Taiwan, Thursday, August 4, 2022. Taiwan canceled airline flights Thursday as the Chinese navy fired artillery near the island in retaliation for a top American lawmaker’s visit. (Photo by Chiang Ying-ying/AP Photo) 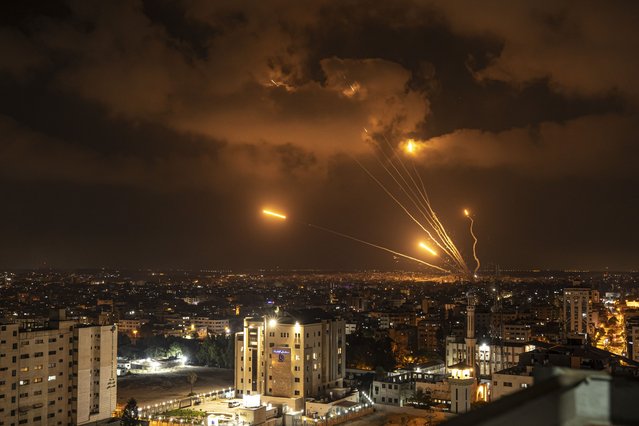 Rockets fired by Palestinian militants toward Israel, in Gaza City, Friday, August 5, 2022. Palestinian officials say Israeli airstrikes on Gaza have killed at least 10 people, including a senior militant, and wounded 55 others. (Photo by Fatima Shbair/AP Photo) 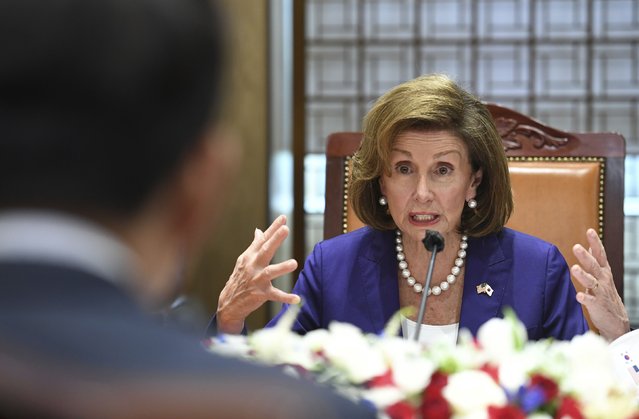 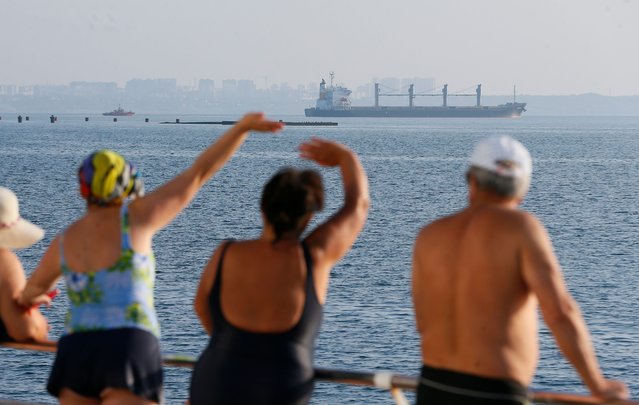 People watch cargo vessel Navi Star carrying 33,000 tonnes of corn to Ireland leave the port of Odesa, Ukraine, 05 August 2022. Two vessels left the port of Chornomorsk and one from the Odesa port. The bulk carriers NAVI STAR, ROJEN, and POLARNET with a total of 57,000 tonnes of corn on board are headed for Turkey, Great Britain, and Ireland as the Administration of Seaports of Ukraine reported. Ukraine started exporting grain since a safe passage deal was signed between Ukraine and Russia on 22 July in Istanbul. Russian troops on 24 February entered Ukrainian territory, starting a conflict that has provoked destruction and a humanitarian crisis. (Photo by EPA/EFE/Rex Features/Shutterstock) 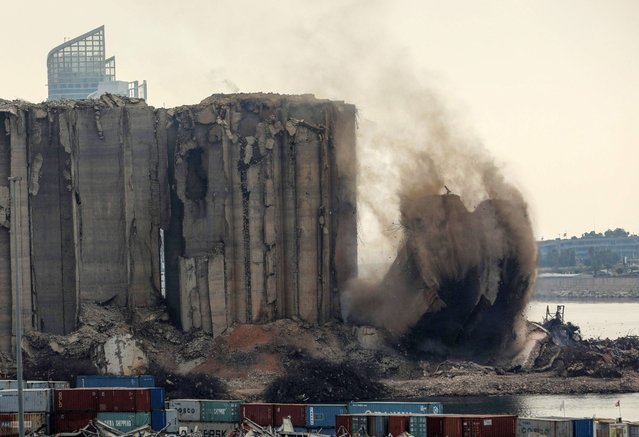 Part of the grain silos in the port of Beirut collapses, due to an ongoing fire since the beginning of last month, on August 4, 2022, on the day that crisis-hit Lebanon marks two years since a giant explosion ripped through the capital. On August 4, 2020, the dockside blast of haphazardly stored ammonium nitrate, one of history's biggest non-nuclear explosions, killed more than 200 people, wounded thousands and decimated vast areas of the capital. (Photo by Ibrahim Amro/AFP Photo) 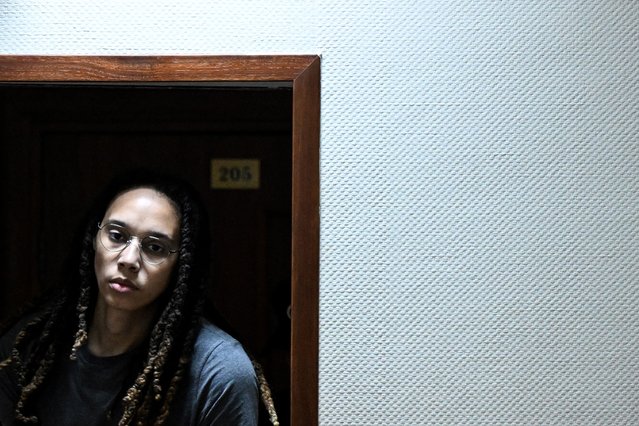 US Women National Basketball Association's (NBA) basketball player Brittney Griner, who was detained at Moscow's Sheremetyevo airport and later charged with illegal possession of cannabis, is escorted to the courtroom to hear the court's final decision in Khimki outside Moscow, on August 4, 2022. Russian prosecutors requested that US basketball star Brittney Griner be sentenced to nine and a half years in prison on drug smuggling charges. Her hearing comes with tensions soaring between Moscow and Washington over Russia's military intervention in Ukraine that has sparked international condemnation and a litany of Western sanctions. (Photo by Kirill Kudryavtsev/Pool via AFP Photo) 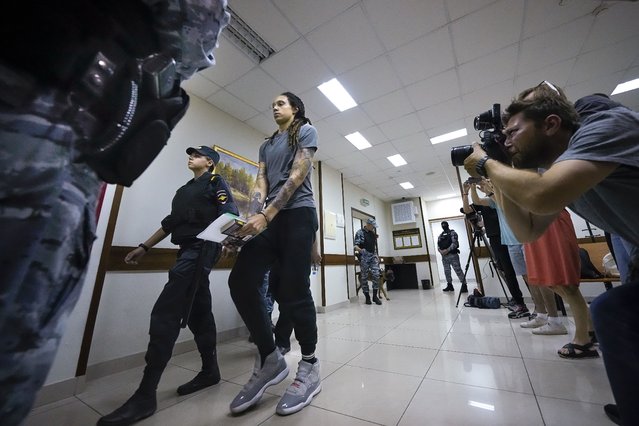 WNBA star and two-time Olympic gold medalist Brittney Griner is escorted from a court room ater a hearing, in Khimki just outside Moscow, Russia, Thursday, August 4, 2022. A judge in Russia has convicted American basketball star Brittney Griner of drug possession and smuggling and sentenced her to nine years in prison. (Photo by Alexander Zemlianichenko/AP Photo) 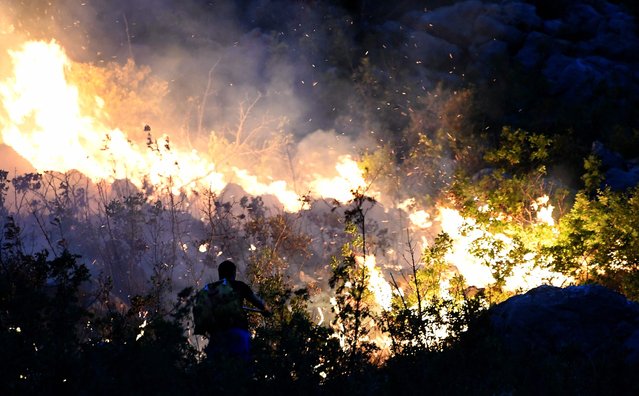 Bosnian volunteer firefighters face a fire near the Bosnian Adriatic coast town of Neum, on August 4, 2022. Wildfires in the area of Neum rage since August 3. No victims were recorded, but material damages are high. Firefighting is quite difficult after full 3 months of drought in the area, that caused dry grass, bush and evergreens to easily catch fire and burn rapidly. (Photo by Elvis Barukcic/AFP Photo) 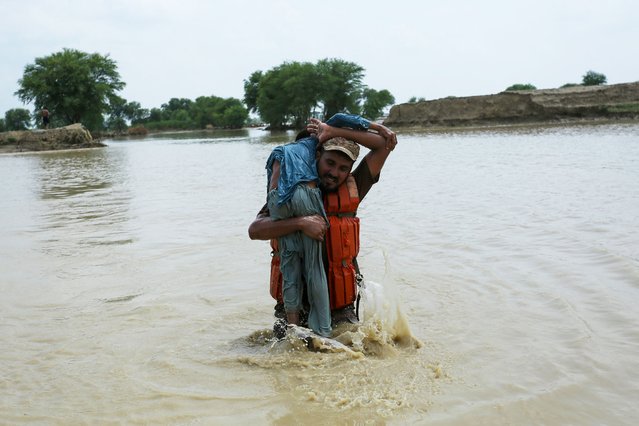 A soldier of Pakistan army rescues a child from the flood affected Rajanpur district, in the Punjab province of Pakistan, on August 2, 2022. Fierce monsoon rains and deadly flooding have hit Pakistan hard this year particularly in Balochistan province, bordering Iran and Afghanistan. At least 478 people have died so far, including 136 in Balochistan. (Photo by Shahid Saeed Mirza/AFP Photo) 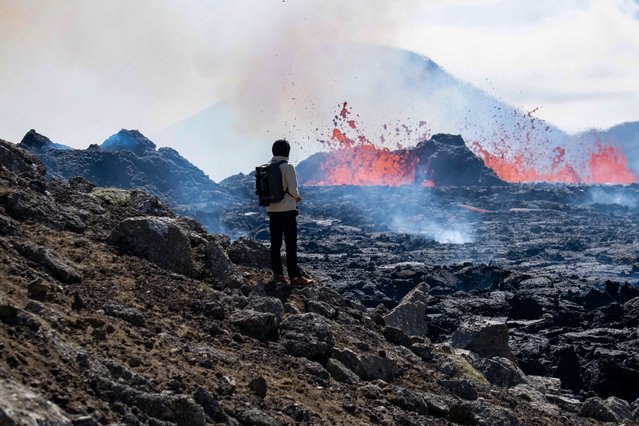 A person looks on the scene of the newly erupted volcano taking place in Meradalir valley, near mount Fagradalsfjall, Iceland on August 4, 2022. The eruption is some 40 kilometres (25 miles) from Reykjavik, near the site of the Mount Fagradalsfjall volcano that erupted for six months in March-September 2021, mesmerising tourists and spectators who flocked to the scene. (Photo by Jeremie Richard/AFP Photo) 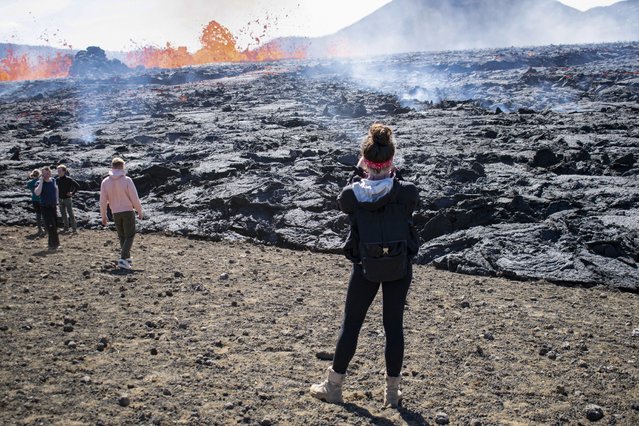 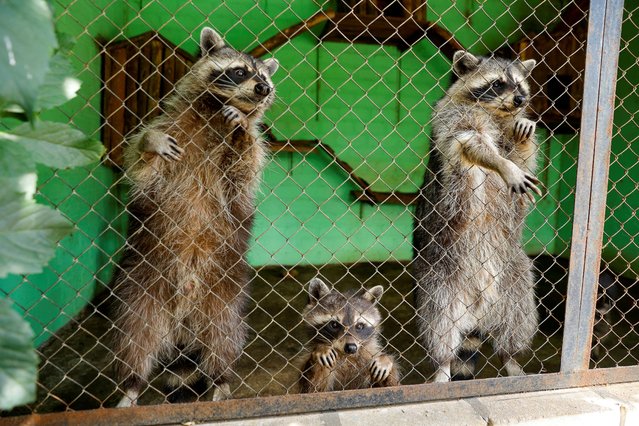 Raccoons are seen inside an enclosure at a local zoo in the course of Ukraine-Russia conflict in the Russian-controlled city of Melitopol in the Zaporizhzhia region, Ukraine on August 3, 2022. (Photo by Alexander Ermochenko/Reuters) 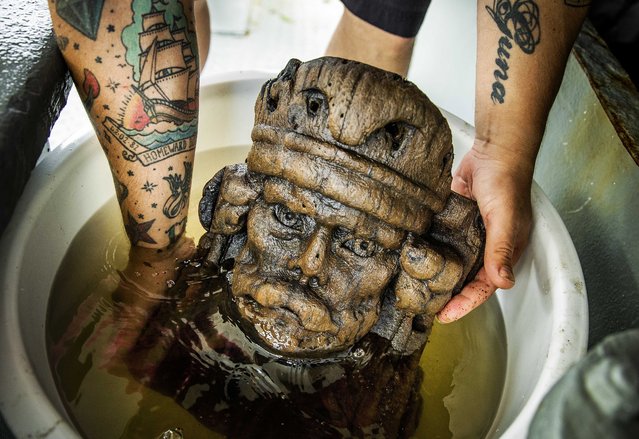 A wooden sculpture is brought ashore by fishermen of the shrimp cutter Wieringer 22 after they fished it up in the Texelstroom fairway, in Den Oever, Netherlands, 04 August 2022. It is believed to be a statue that sat on the stern of a 17th century ship. (Photo by Remko de Waal/EPA/EFE) 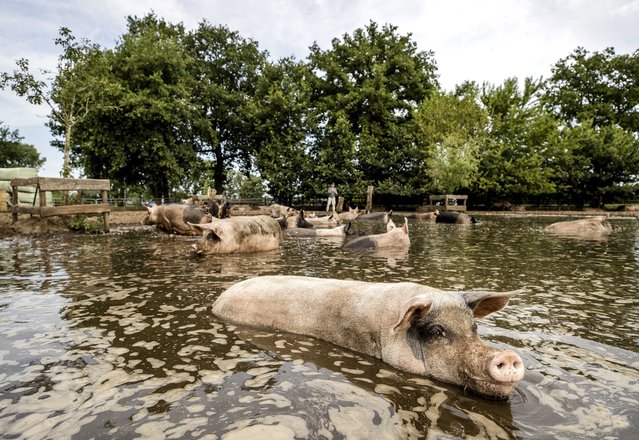 Pigs wade through a mud pool of farmer John Reimert, in Heino, The Netherlands, 04 August 2022. John Reimert is the winner of the Mud Trophy of the Wakker Dier foundation for the Most Beautiful Mud Pool of 2022. (Photo by Sem van der Wal/EPA/EFE) 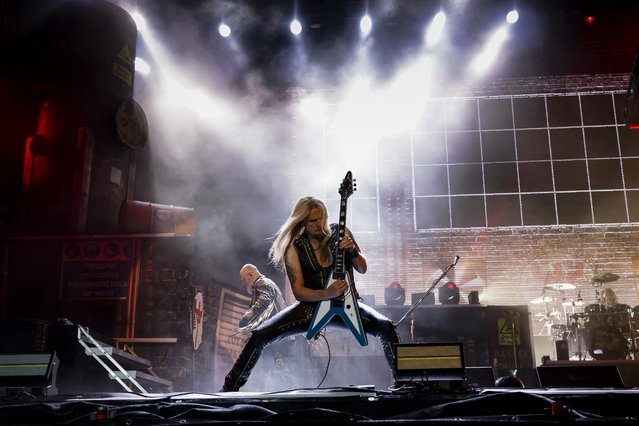 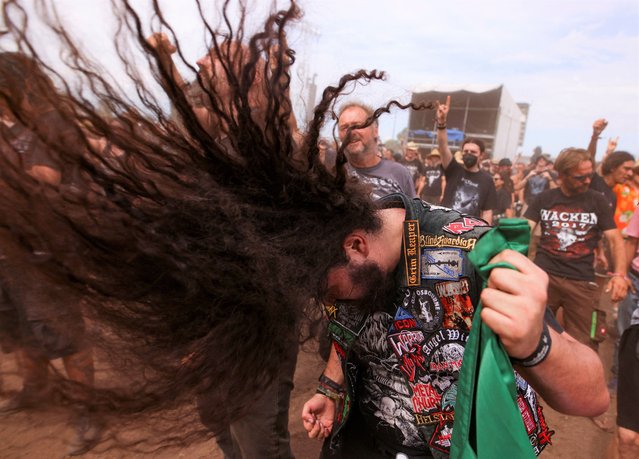 A festivalgoer does a “head banging” during the Wacken Open Air 2022 heavy metal festival in Wacken, Germany August 4, 2022. (Photo by Thilo Schmuelgen/Reuters) 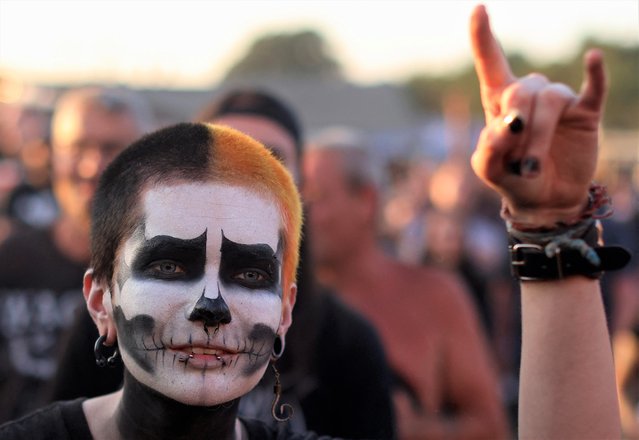 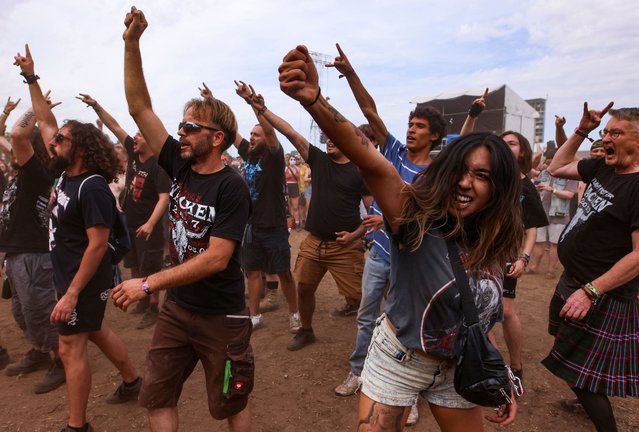 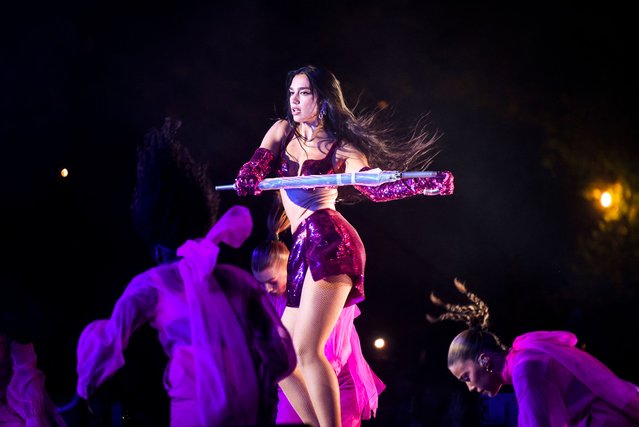 British-Kosovar singer and songwriter Dua Lipa performs on stage during the ”Sunny Hill Festival” organized by her father in Pristina early on August 5, 2022. (Photo by Armend Nimani/AFP Photo) 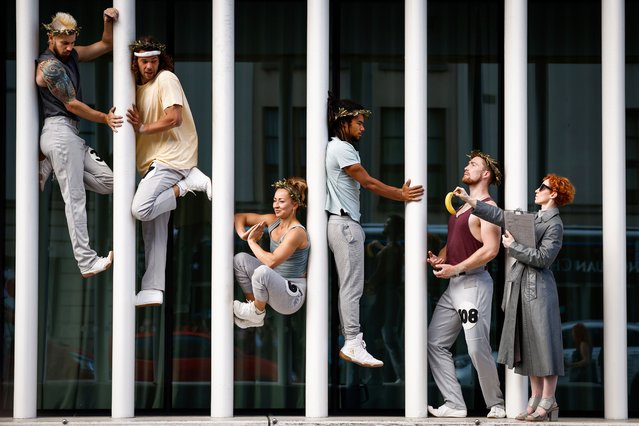 Artists from Barely Methodical Troupe hold a media call for their show Kin at the Assembly Rooms on August 04, 2022 in Edinburgh, Scotland. Fresh from a run in London's West End the circus troupe returns to the Fringe with their show KIN featuring high-octane circus skills and incredible feats of strength. (Photo by Jeff J. Mitchell/Getty Images) 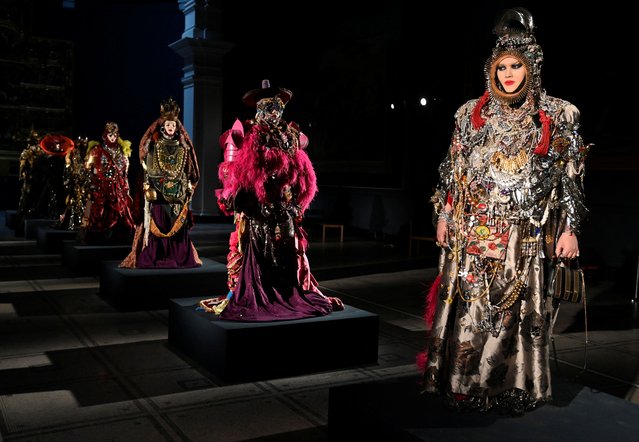 British multidisciplinary artist Daniel Lismore wears one of his sculptural artwork creations next to other mannequins which form part of the “Fashion in Motion: Daniel Lismore” exhibition at the Victoria and Albert Museum in London, Britain on August 5, 2022. (Photo by Toby Melville/Reuters) 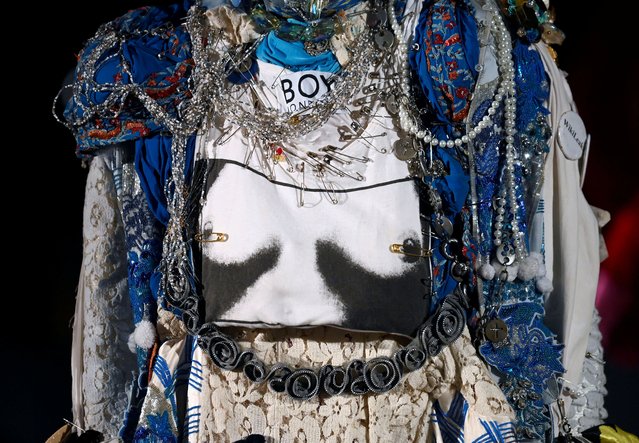