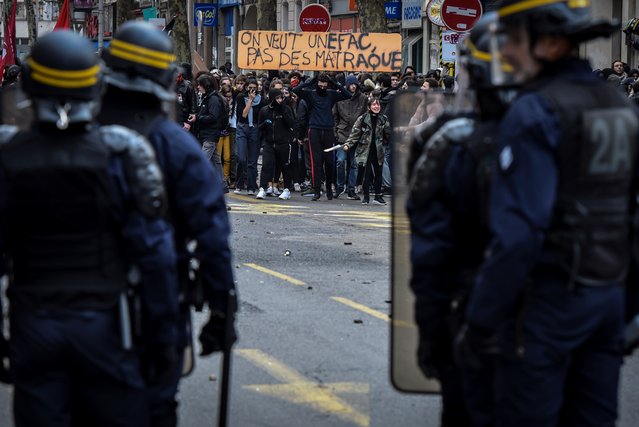 High school students demonstrate in front of riot police in Lyon, on December 7, 2018, to protest against the different education reforms including the overhauls and stricter university entrance requirements. Protests at some 280 schools have added to a sense of general revolt in France. (Photo by Jean-Philippe Ksiazek/AFP Photo) 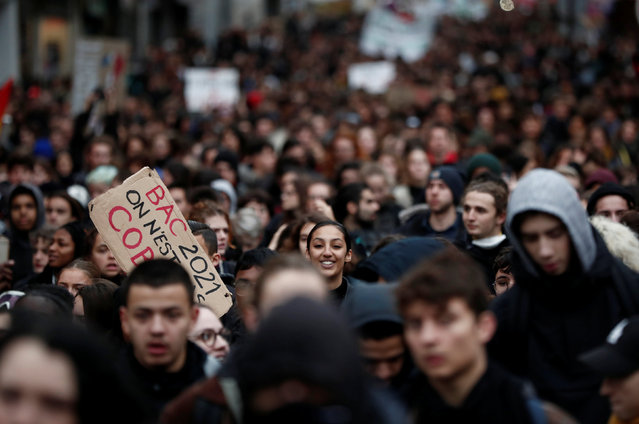 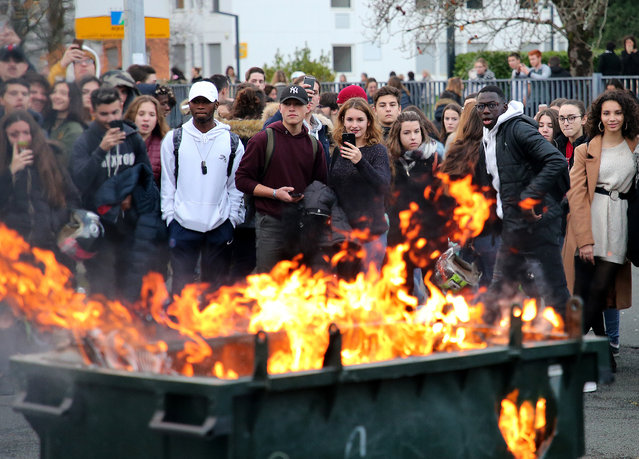 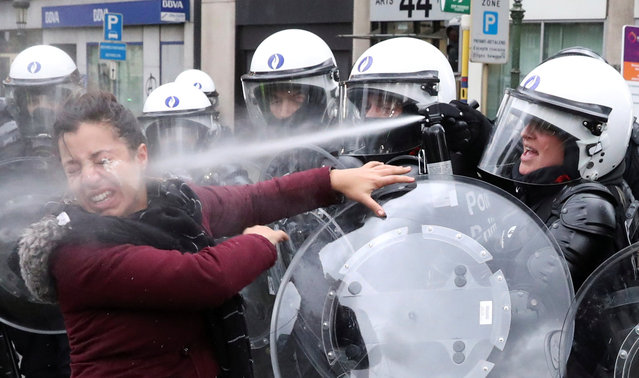 A woman is sprayed with teargas by the riot police officer during the “yellow vests” protest against higher fuel prices, in Brussels, Belgium, December 8, 2018. (Photo by Yves Herman/Reuters) 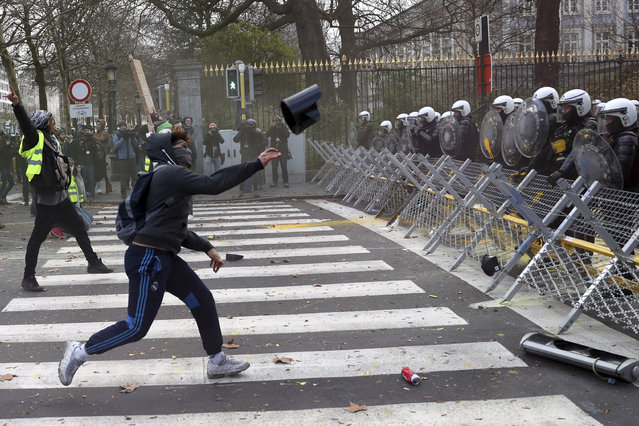 A protestor throws an object at a police line during a demonstration in Brussels, Saturday, December 8, 2018. Hundreds of police officers are being mobilized in Brussels Saturday, where yellow vest protesters last week clashed with police and torched two police vehicles. More than 70 people were detained. (Photo by Francisco Seco/AP Photo) 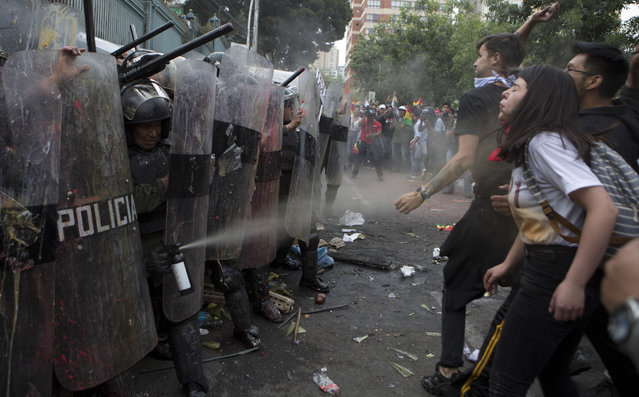 Police use pepper spray on opponents of Bolivia's President Evo Morales who are holding a national strike in La Paz, Bolivia, Thursday, December 6, 2018. Bolivian city's were semi-paralyzed on Thursday by a strike called by opposition groups a day after the country's top electoral court announced that it accepted Morales' candidacy for a fourth term in office, despite a constitutional ban and referendum against such a re-election. (Photo by Juan Karita/AP Photo) 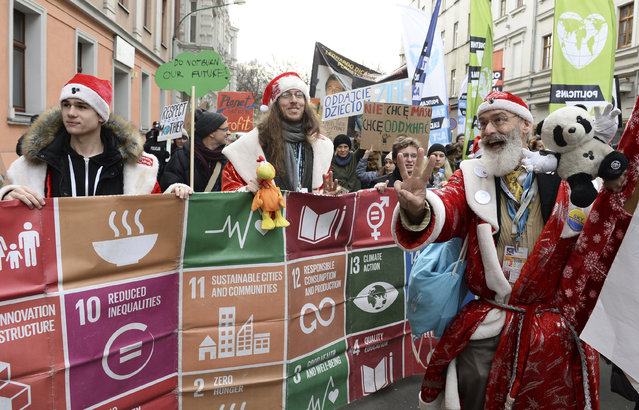 Climate activists attend the March for Climate in a protest against global warming in Katowice, Poland, Saturday, December 8, 2018, as the COP24 UN Climate Change Conference takes place in the city. (Photo by Alik Keplicz/AP Photo) 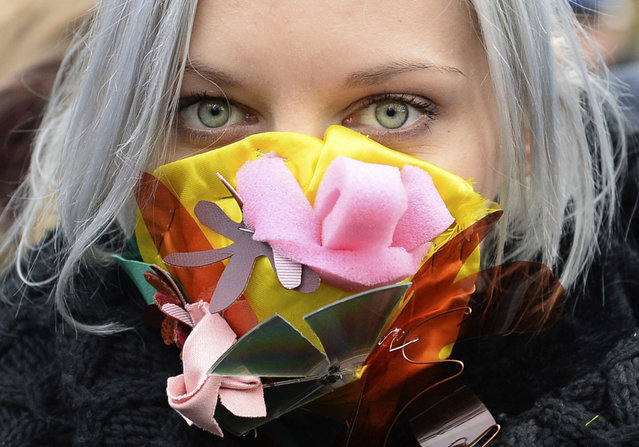 A climate activists with a colorful mask attends the March for Climate in a protest against global warming in Katowice, Poland, Saturday, December 8, 2018, as the COP24 UN Climate Change Conference takes place in the city. (Photo by Alik Keplicz/AP Photo) 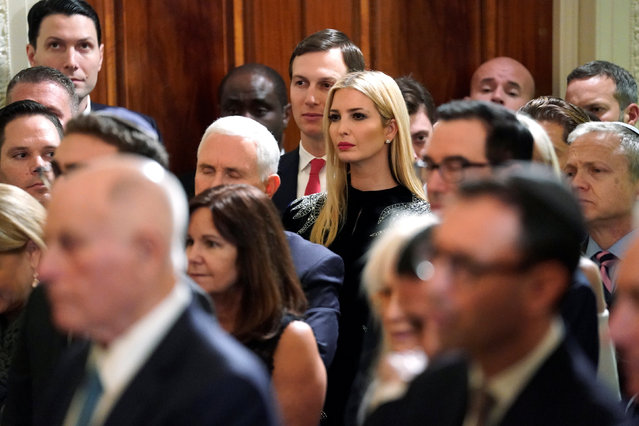 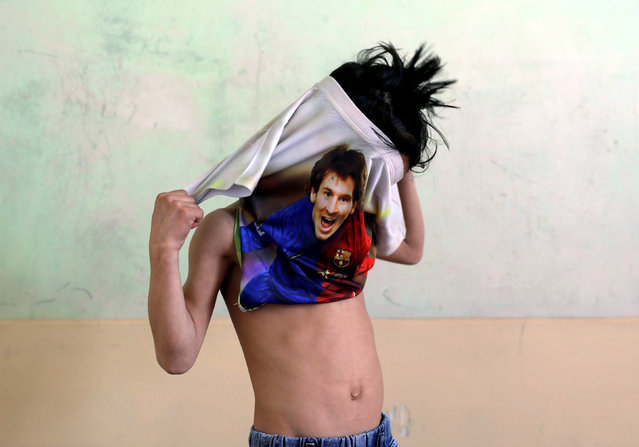 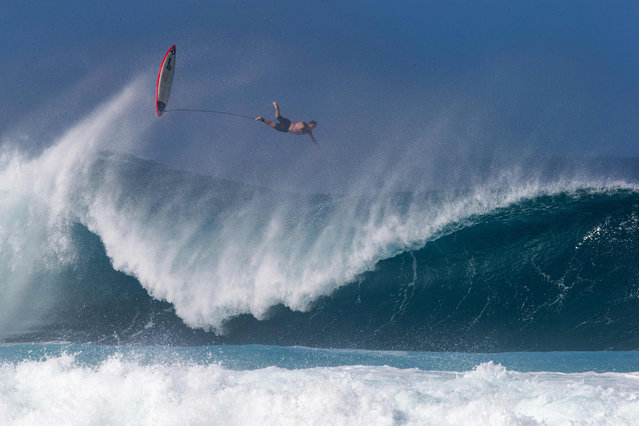 Hawaii's pro surfer Kalani Chapman wipes out while surfing Banzai Pipeline ahead of the Billabong Pipe Masters on the north shore of Oahu in Hawaii on December 6, 2018. (Photo by Brian Bielmann/AFP Photo) 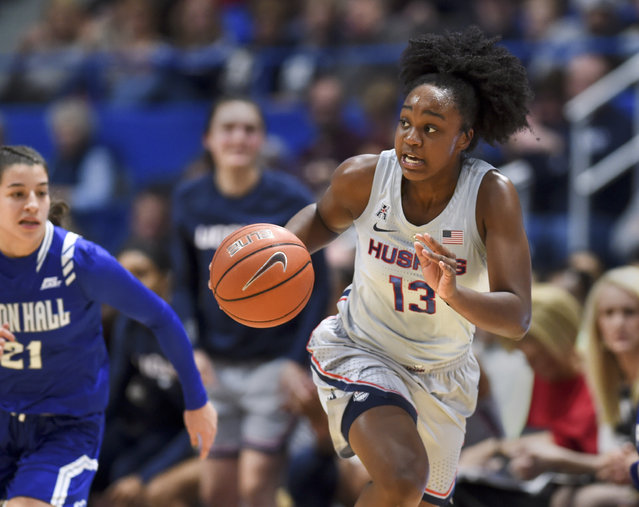 Connecticut's Christyn Williams (13) drives down the court in the first half of an NCAA college basketball game against Seton Hall, Saturday, December 8, 2018, in Hartford, Conn. (Photo by Stephen Dunn/AP Photo) 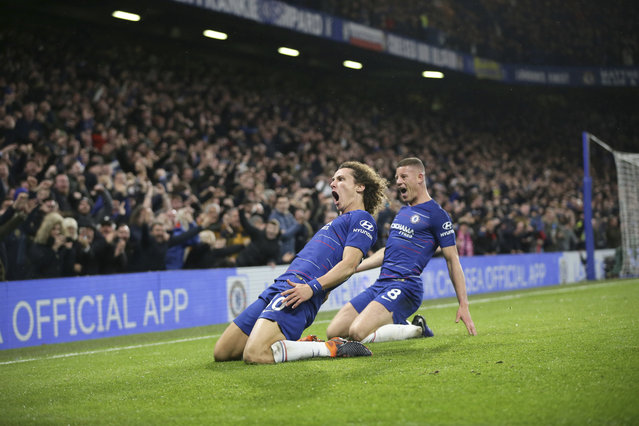 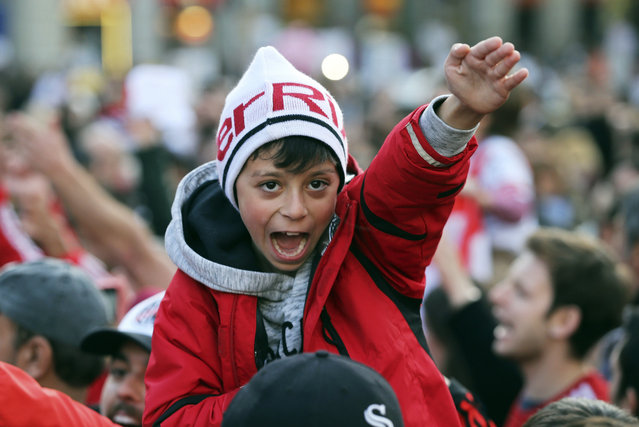 River Plate supporters cheer during a gathering at the Puerta del Sol square in Madrid Saturday, December 8, 2018. The Copa Libertadores Final between River Plate and Boca Juniors will be played on Dec. 9 in Madrid, Spain, at Real Madrid's stadium. (Photo by Armando Franca/AP Photo) 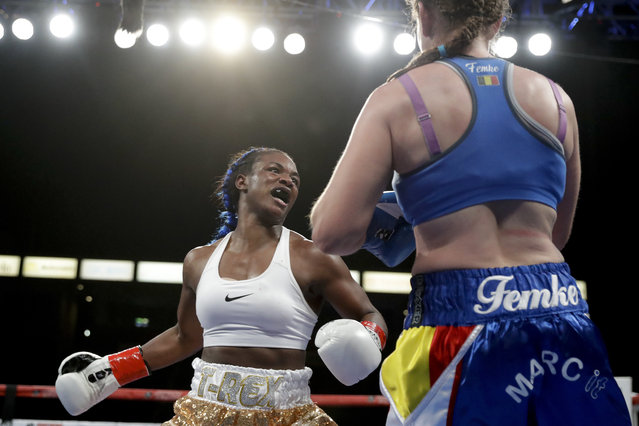 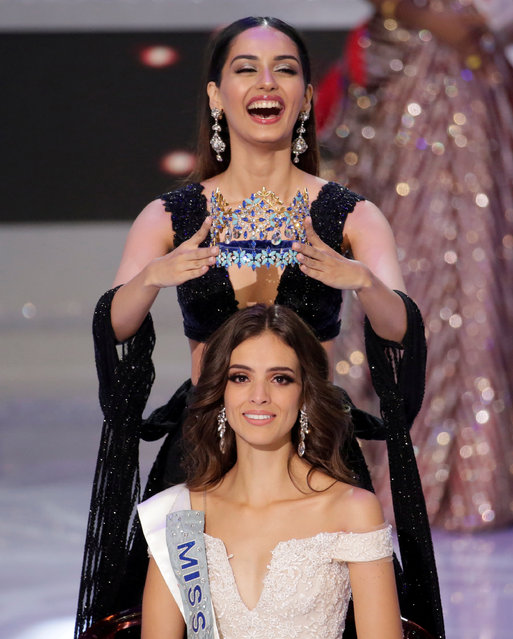 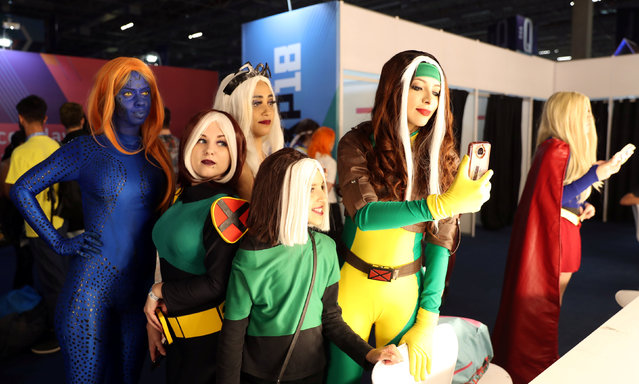 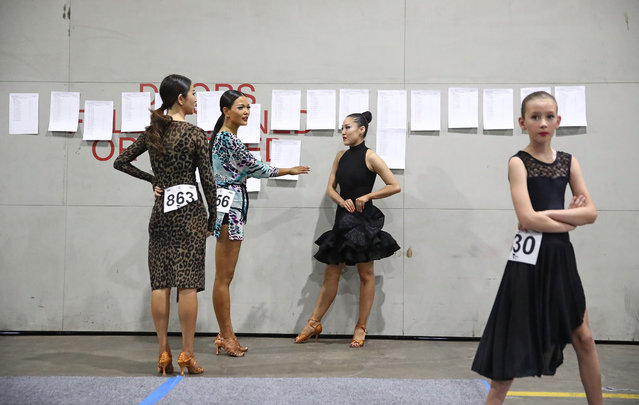 Competitors warm up and look at the cometition lists back stage during the 73rd Australian DanceSport Championship at Melbourne Arena on December 7, 2018 in Melbourne, Australia. Over 1000 competitive ballroom athletes aged between 10 and 65 years are taking part in the competition, with major events deciding Australia's representatives for all 2019 World Championships. (Photo by Scott Barbour/Getty Images) 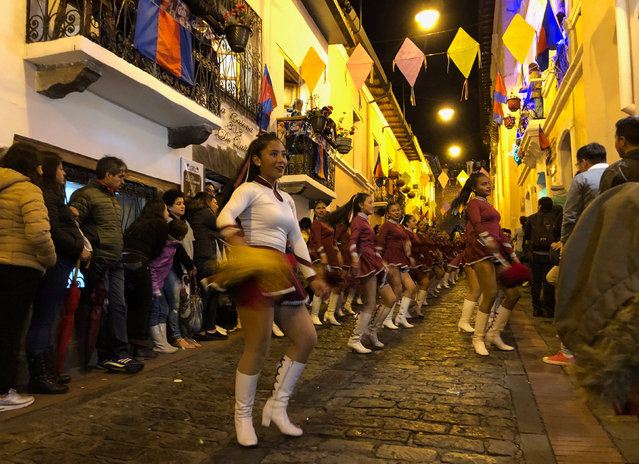 Crowds and marching bands gather for a nighttime parade in the city’s La Ronda section, part of the city’s historic center, commemorating the anniversary of the city’s founding by Spaniards, in Quito, Ecuador, December 6, 2018. (Photo by Will Dunham/Reuters) 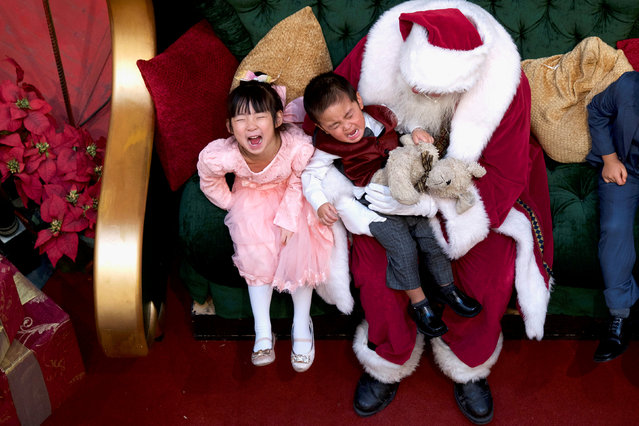 A girl laughs while her brother cries being held by Santa Claus at the King of Prussia Mall, in King of Prussia, Pennsylvania, U.S., December 8, 2018. (Photo by Mark Makela/Reuters) 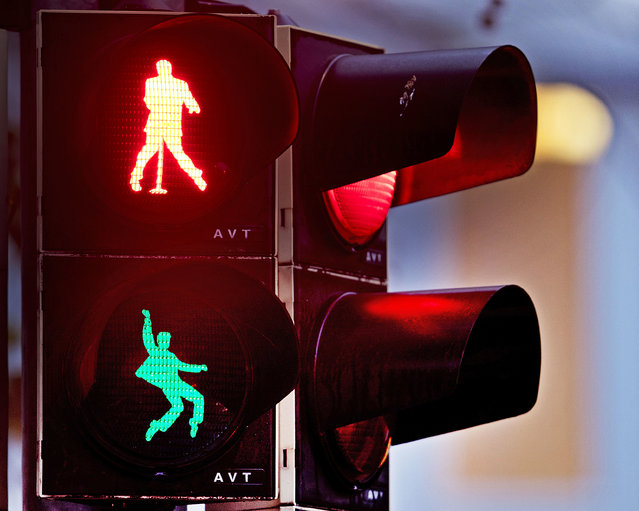