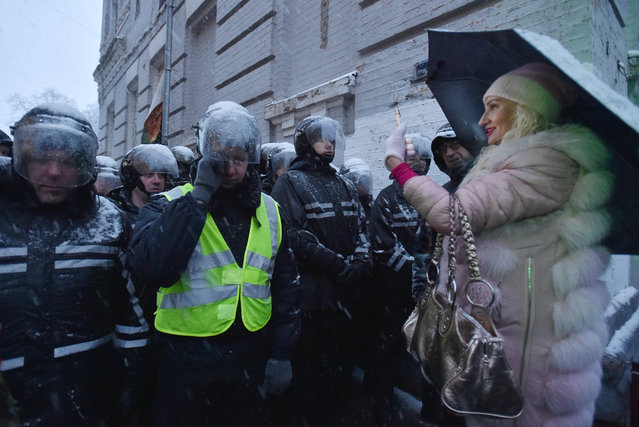 A woman takes pictures of policemen as they observe supporters attending a rally in support of arrested former Georgian President Mikheil Saakashvili outside a detention centre in Kiev on December 10, 2017. Ukrainian police re-arrested Saakashvili after a similar attempt to detain the opponent of Ukranian President Petro Poroshenko had failed. (Photo by Genya Savilov/AFP Photo) 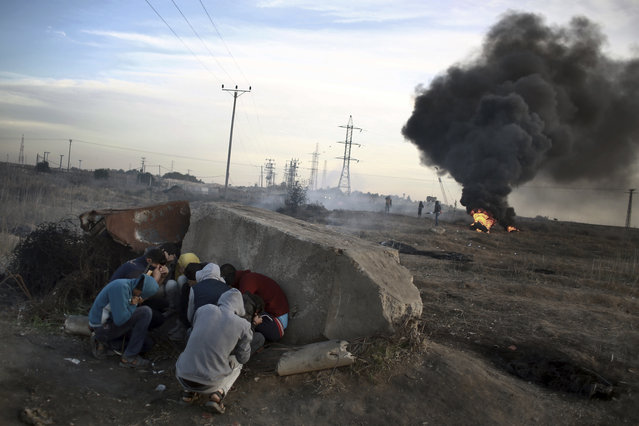 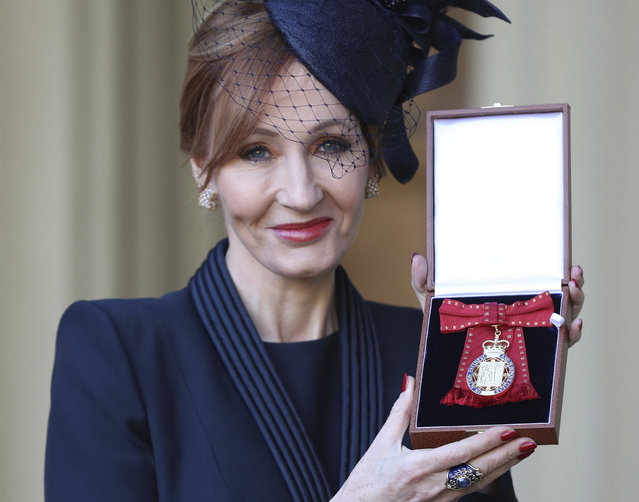 The author of the Harry Potter books, JK Rowling poses after she was made a Companion of Honour during an Investiture ceremony at Buckingham Palace in London, Tuesday December 12, 2017. The Duke of Cambridge conducted the investiture for the honour. (Photo by Andrew Matthews/Pool via AP Photo) 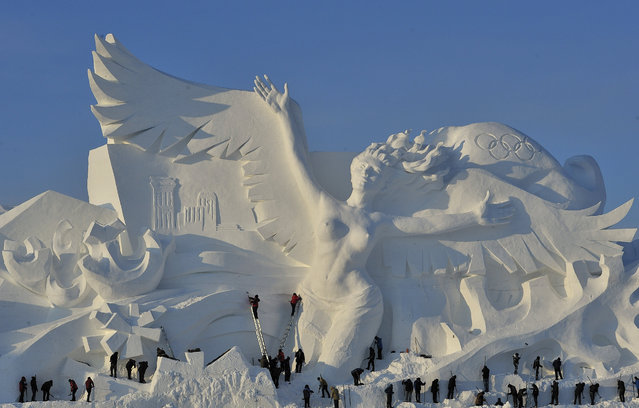 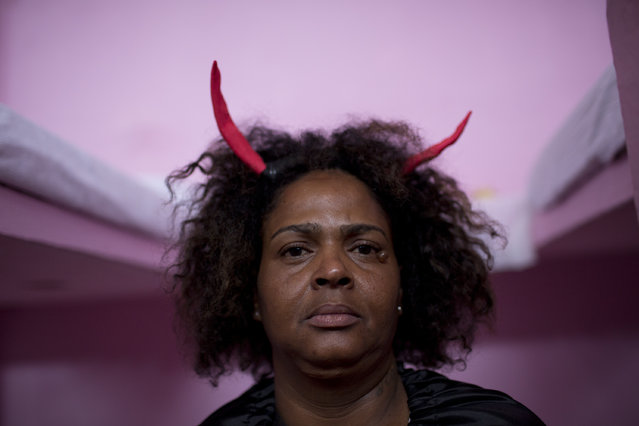 An inmate wears red horns as part of her costume representing evil and temptation, during the 8th annual Christmas event at the Nelson Hungria Prison, in Rio de Janeiro, Brazil, Tuesday, December 12, 2017. Inmates who are serving time for offenses from burglary to homicide, spent weeks decking out the cell blocks with the holiday decorations they created. The inmates used materials they had access to behind bars such as plastic bottles, paper, ground-up Styrofoam and aluminum trays. (Photo by Silvia Izquierdo/AP Photo) 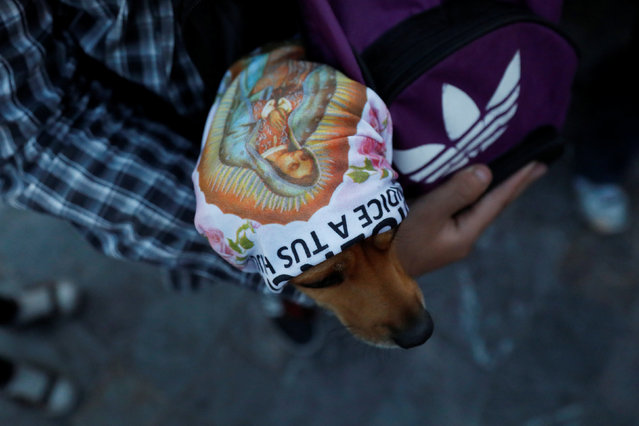 A dog wears a scarf with an image of the Virgin of Guadalupe during an annual pilgrimage in her honour in Mexico City, Mexico on December 12, 2017. (Photo by Carlos Jasso/Reuters) 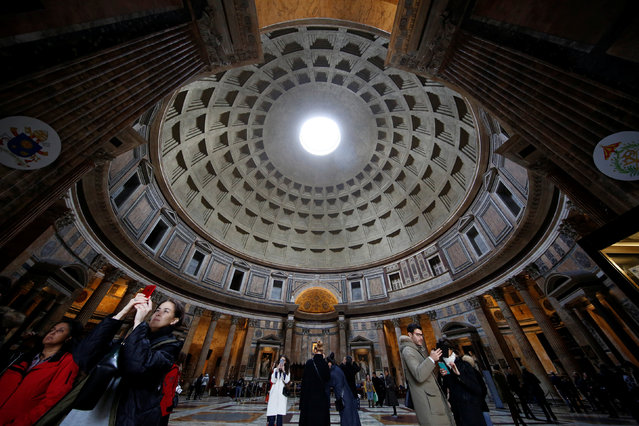 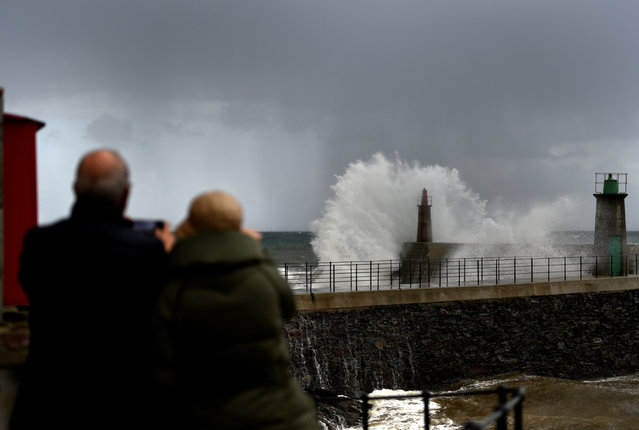 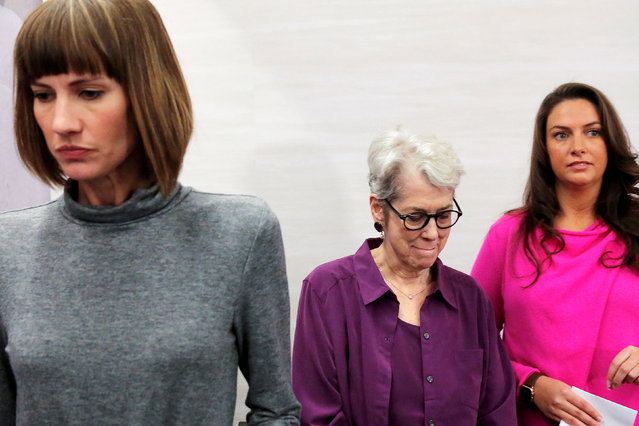 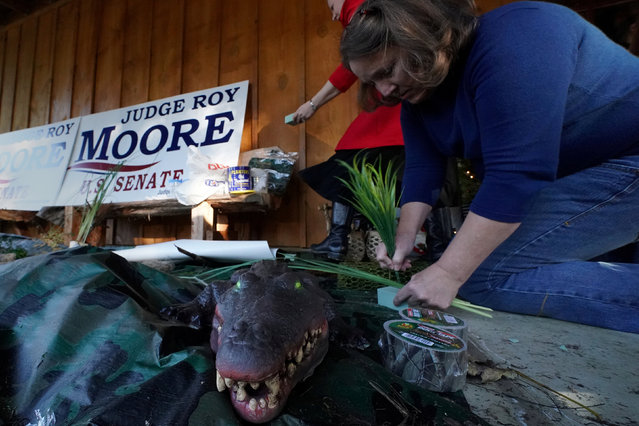 Workers set up an artificial “swamp” outside a venue where Republican Senate candidate Roy Moore will hold a rally in Midland City, Alabama, U.S., December 11, 2017. (Photo by Carlo Allegri/Reuters) 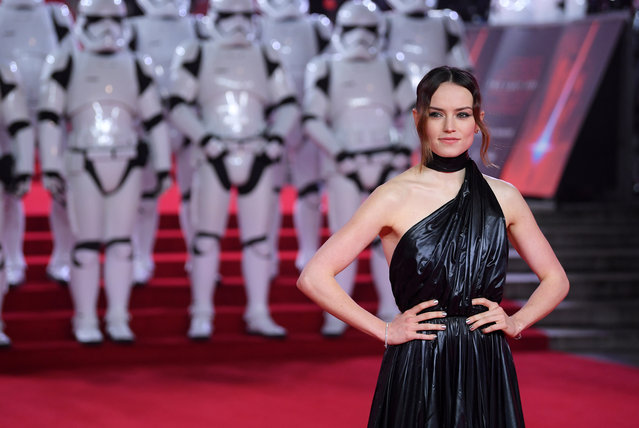 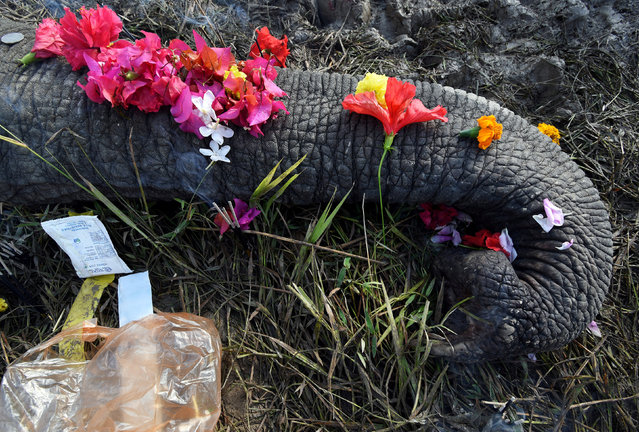 Flowers are seen placed by people on a carcass of an elephant, who according to forest officials was electrocuted early morning in a paddy field at Kuruabahi village, in Nagaon district in the northeastern state of Assam, India, December 12, 2017. (Photo by Anuwar Hazarika/Reuters) 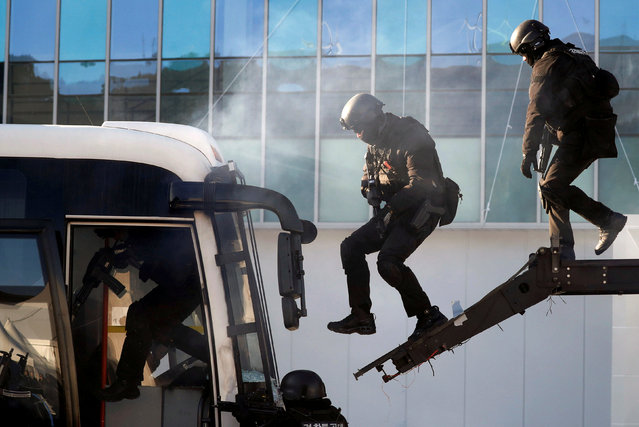 Members of Special Weapon and Tactics (SWAT) take part in a security drill ahead of the 2018 Pyeongchang Winter Olympic Games at the Olympic Stadium, the venue for the opening and closing ceremony in Pyeongchang, South Korea December 12, 2017. (Photo by Kim Hong-Ji/Reuters) 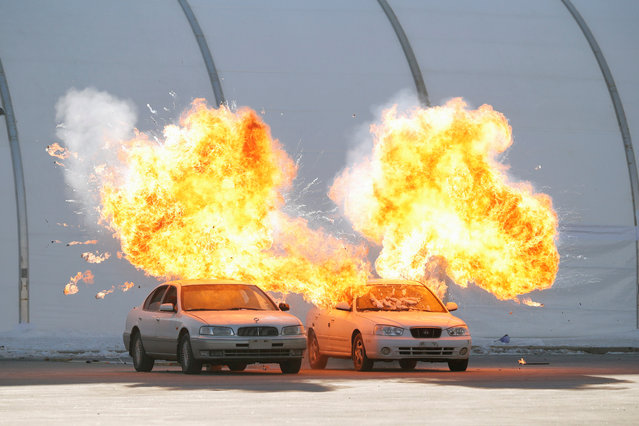 Vehicles explode during a security drill ahead of the 2018 Pyeongchang Winter Olympic Games at the Olympic Stadium, venue for the opening and closing ceremony in Pyeongchang, South Korea December 12, 2017. (Photo by Kim Hong-Ji/Reuters) 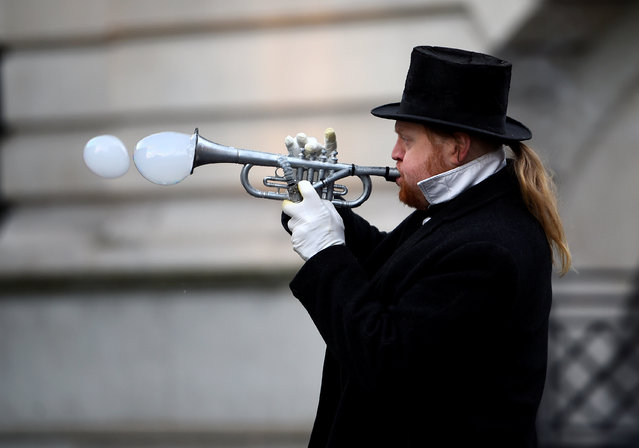 A street artist performs with soap bubbles outside the Natural History Museum in London, Britain, December 12, 2017. (Photo by Clodagh Kilcoyne/Reuters) 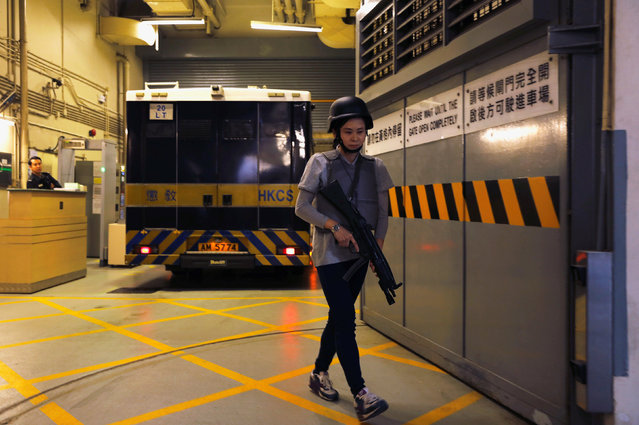 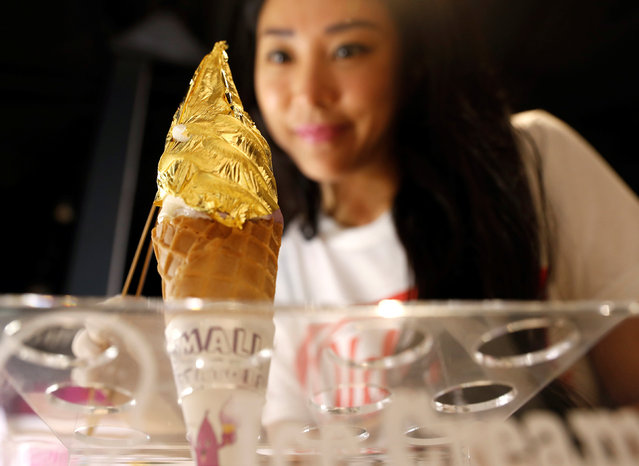 The final touches are applied to a 24k edible gold leaf soft ice-cream at the Small Potatoes Ice Creamery shop in Singapore on December 12, 2017. (Photo by Edgar Su/Reuters) 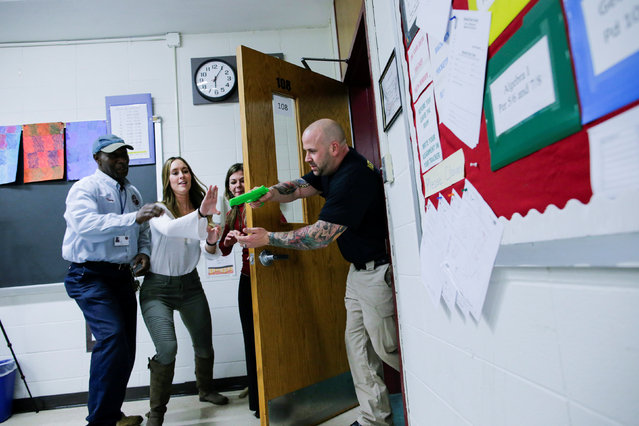 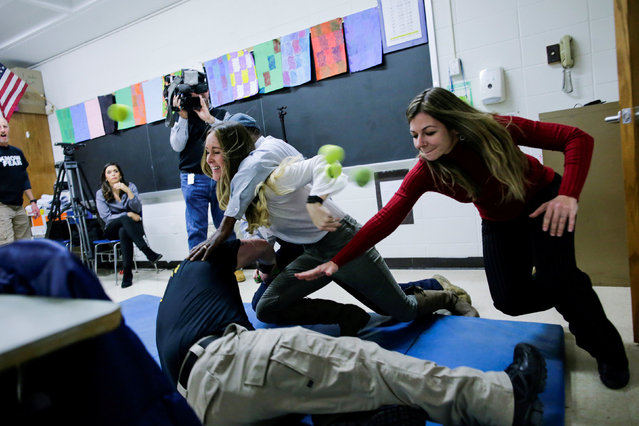 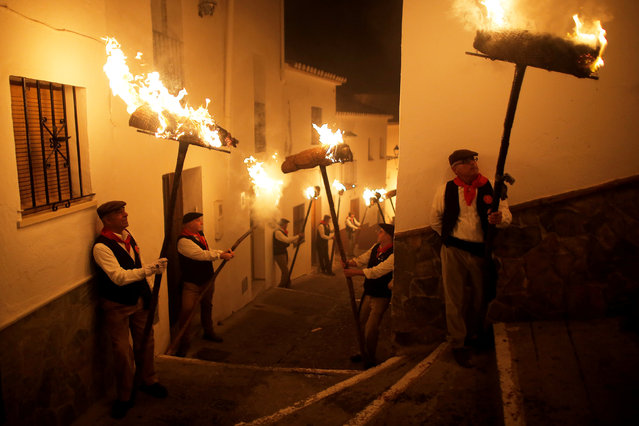 Villagers hold torches to represent light and vision during the Divina Pastora procession, as part of a festival to honour the Virgin of Los Rondeles, on the eve of St Lucia's Day, in Casarabonela, near Malaga, southern Spain December 12, 2017. (Photo by Jon Nazca/Reuters) 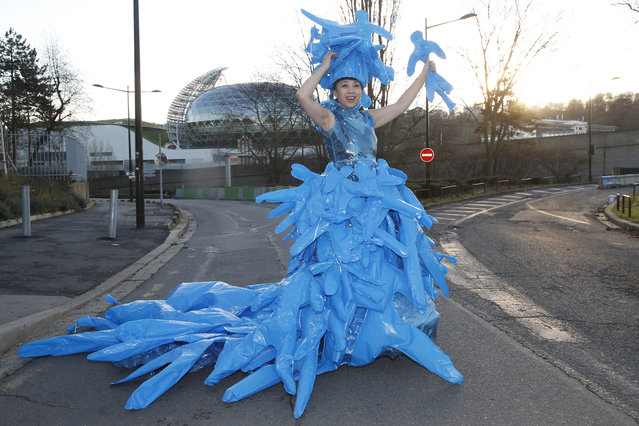