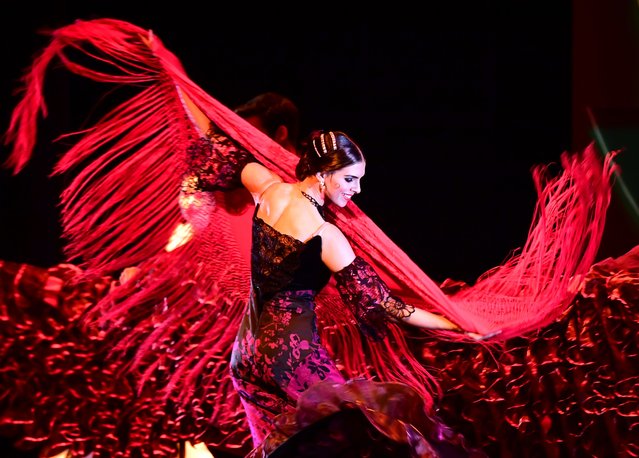 Flamenco dancer Zsofi Pirok of the “Gyor Ballet” group performs on the stage of AUDI Arena of Gyor, Hungary, on December 10, 2016 during the premiere for a Christmas classical, the “Nutcracker” of Russian composer Pyotr Ilyich Tchaikovsky's music, choreographed and directed by Hungarian Gyula Harangozo junior. (Photo by Attila Kisbenedek/AFP Photo) 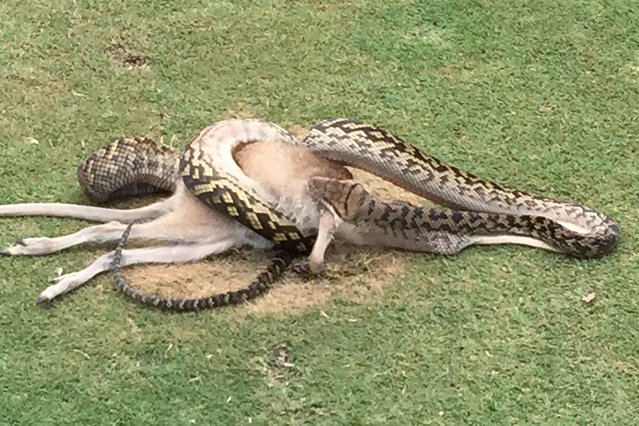 This handout photo from Robert Willemse taken on December 10, 2016 and received on December 13, 2016 shows a python wrestling with a wallaby in the middle of a fairway on a golf course in Cairns. A routine round of golf has taken a uniquely Australian turn with stunned players finding a giant python wrestling with a wallaby on a fairway. Robert Willemse was on the 17th hole at the Paradise Palms course in Cairns in north Queensland on December 10 when he heard that a four-metre (13-foot) scrub python was gorging on the native marsupial nearby. (Photo by Robert Willemse/AFP Photo) 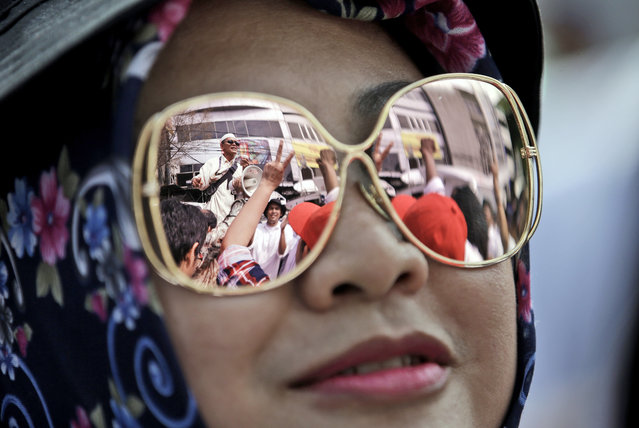 People taking part in a protest to support Jakarta Governor Basuki Tjahaja Purnama, popularly known as “Ahok”, is reflected in the sunglasses of a woman outside North Jakarta District Court where his trial is held, in Jakarta, Indonesia, Tuesday, December 13, 2016. Ahok is on trial on accusation of blasphemy following his remark about a passage in the Quran that could be interpreted as prohibiting Muslims from accepting non-Muslims as leaders. (Photo by Achmad Ibrahim/AP Photo) 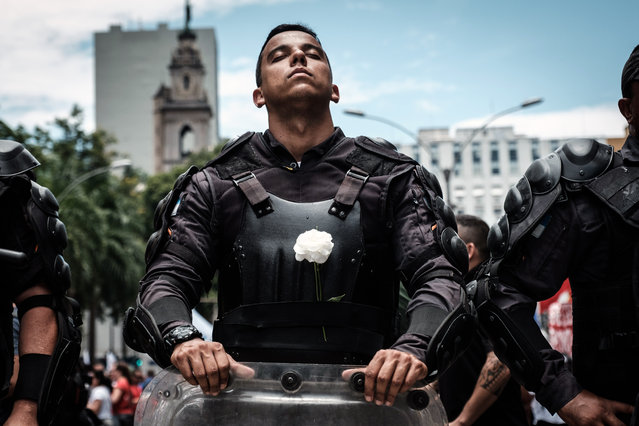 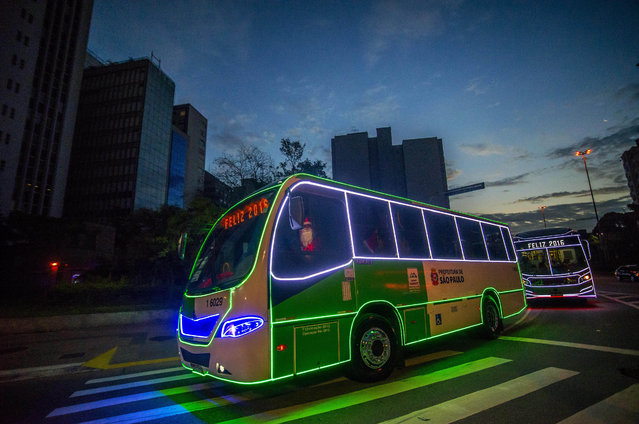 A bus which has been illuminated and decorated for Christmas in Sao Paulo, Brazil on December 13, 2016. (Photo by Zuma Press/Rex Features/Shutterstock) 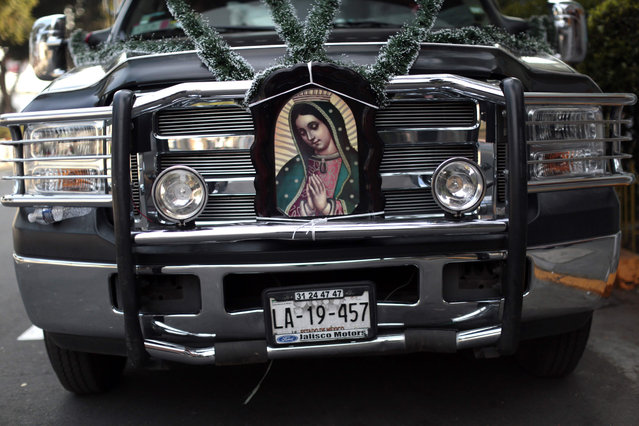 Faithful celebrate the feast of the Virgin of Guadalupe, patron saint of Mexico in Mexico City on December 12, 2016. (Photo by Pedro Pardo/AFP Photo) 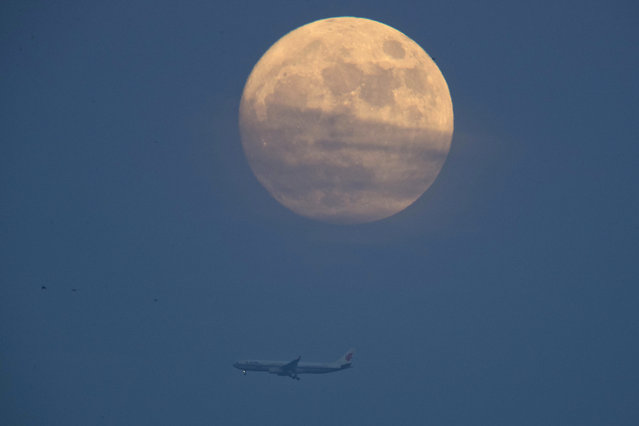 A jet liner flies near the supermoon seen from Beijing, China, Tuesday, December 13, 2016. The supermoon phenomenon which occurs when the moon reaches a point closer than usual, shone brightly Tuesday night in Beijing, as the smog that often blankets China's capital city and most of the industrial north in winter subsided for the evening. (Photo by Ng Han Guan/AP Photo) 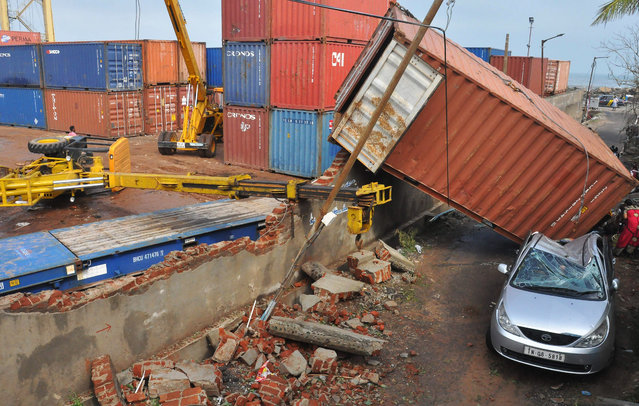 A shipping container lies in a street after falling from the walls around a harbour in Chennai on December 12, 2016. At least 10 people were killed when Cyclone Vardah slammed into the southern Indian tech hub of Chennai, bringing down houses and cutting off the electricity supply, authorities said December 13. Most were crushed by trees uprooted in winds of up to 140 kilometres (87 miles) per hour, which also cut power across large swathes of southern India on December 12. (Photo by AFP Photo/Stringer) 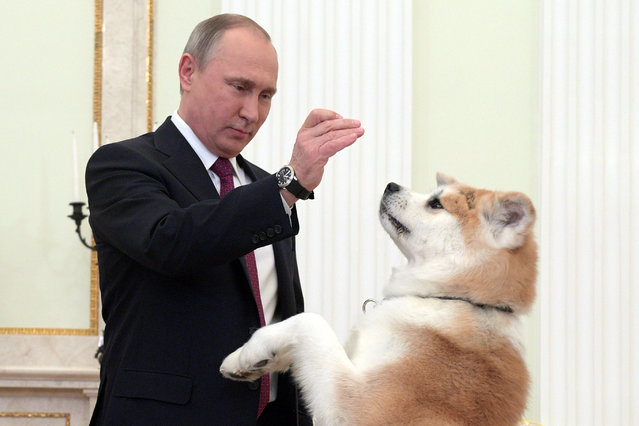 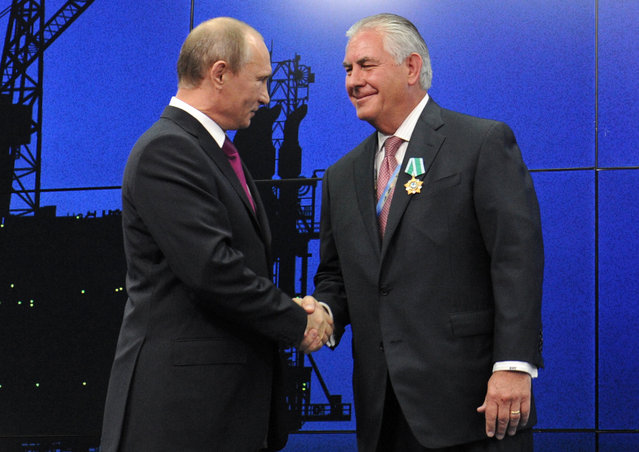 In this photo taken Thursday, June 21, 2012, Russian President Vladimir Putin presents ExxonMobil CEO Rex Tillerson with a Russian medal at an award ceremony of heads and employees of energy companies at the St. Petersburg economic forum in St. Petersburg, Russia. An aide to President Vladimir Putin praised United States President-elect Donald Trump’s choice of Rex Tillerson to lead the State Department and says that the businessman is well regarded by many Russian officials. ﻿(Photo by Mikhail Klimentyev/Sputnik/Kremlin Pool Photo via AP Photo) 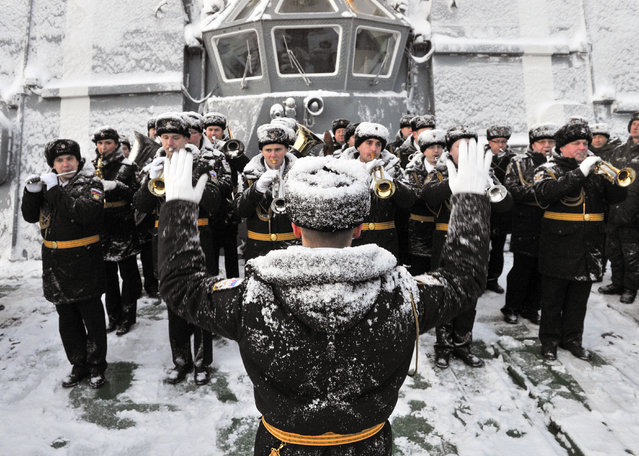 A military band performs during a welcome ceremony for an anti-submarine ship returning from a Mediterranean mission in Severomorsk, Russia on December 13, 2016. (Photo by Lev Fedoseyev/TASS) 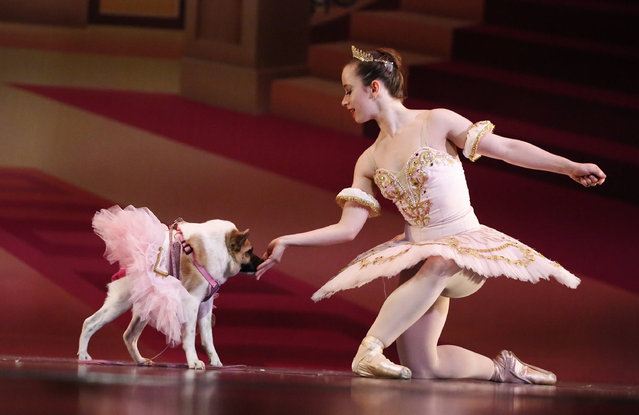 In a Thursday, December 8, 2016 photo, performing as the Sugar Plum Fairy, Katherine Free, left, dances with Pig, the dog, during the Birmingham's Ballet Mutt-cracker, a rendition of the famous ballet “The Nutcracker”, in Birmingham, Ala. Pig was a featured performer, wearing a pink tutu and dancing alone with the Sugar Plum Fairy in Act 2. Born with a condition called short-spine syndrome, the 3-year-old dog hops somewhat like a frog to stand up and has hunched shoulders that make her gait appear somewhat gorilla-like. (Photo by Brynn Anderson/AP Photo) 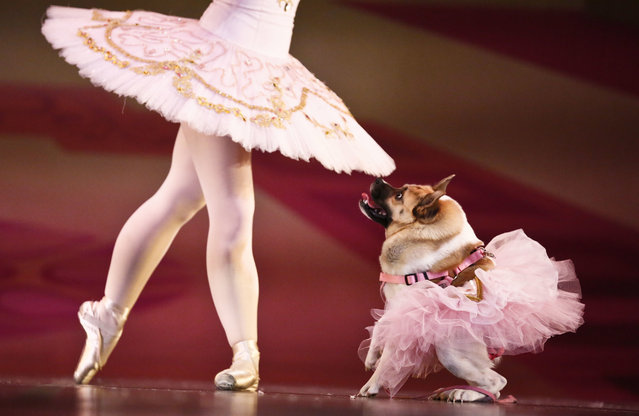 The Sugar Plum Fairy, Katherine Free, left, dances with the dog, Pig, during the Birmingham's Ballet “Mutt-cracker”, a rendition of the famous ballet “The Nutcracker”, in Birmingham, Alabama, December 8, 2016. (Photo by Brynn Anderson/AP Photo) 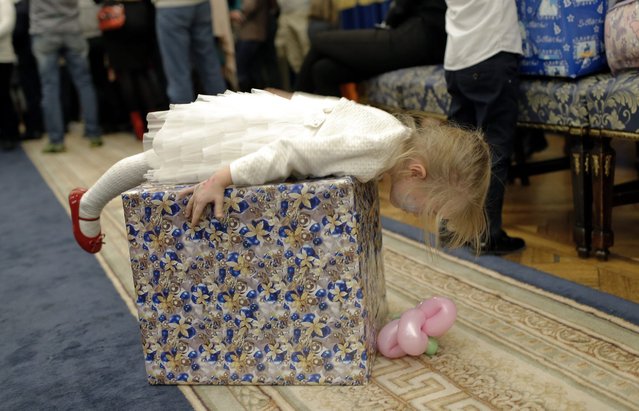 Romanian girl Grigolre Nicole Isabela, 3, enjoys her present while playing on top of it during a Christmas Tree show dedicated to the children of the fallen or wounded heroes of Romanian Army, who died or were injured while serving in Afghanistan and Iraq wars, at the Military House in Bucharest, Romania, December 13, 2016. (Photo by Robert Ghement/EPA) 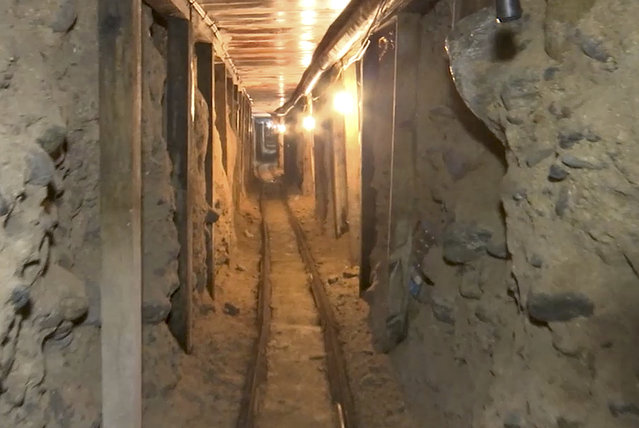 This frame grab taken from a Monday, December 12, 2016 video provided by the Mexican Attorney General's Office, or PGR, shows one of two tunnels found in an area of warehouses in the border city of Tijuana that lead into California. Prosecutors said Monday that one of the tunnels led into San Diego, California, and the other was unfinished. The Attorney General’s Office said the tunnels were apparently used by the Sinaloa drug cartel to move drugs into the United States. (Photo by Mexico's Attorney General's Office via AP Photo) 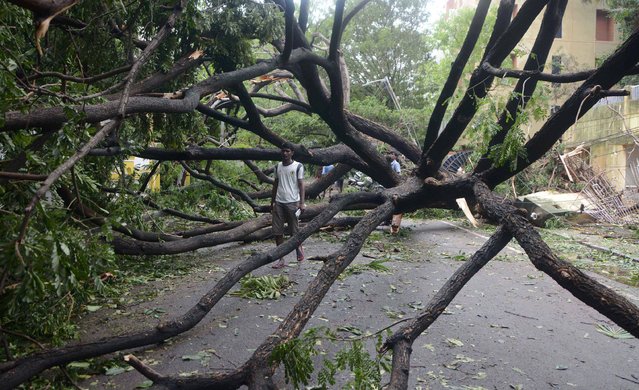 An Indian man walks next to a ripped up tree on a street in Chennai after Cyclone Vardah passed by on December 13, 2016. At least 10 people were killed when Cyclone Vardah slammed into the southern Indian tech hub of Chennai, bringing down houses and cutting off the electricity supply, authorities said December 13. (Photo by AFP Photo) 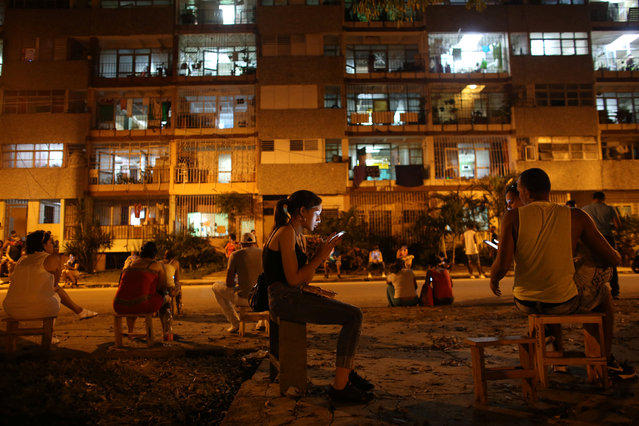 Lismai Aguilar (C), 18, uses a mobile phone to connect to the internet at a hotspot in downtown Havana, Cuba, December 12, 2016. (Photo by Alexandre Meneghini/Reuters) 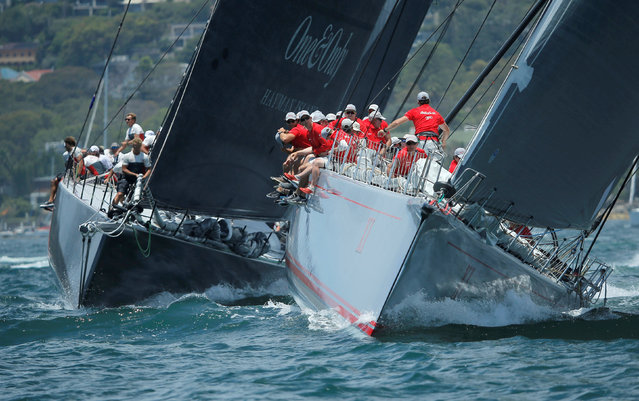 The yacht Wild Oats XI (R) leads Scallywag on its way to winning the Big Boat Challenge on Sydney Harbour December 13, 2016, before the annual Sydney to Hobart Yacht race to be held on December 26. (Photo by Jason Reed/Reuters) 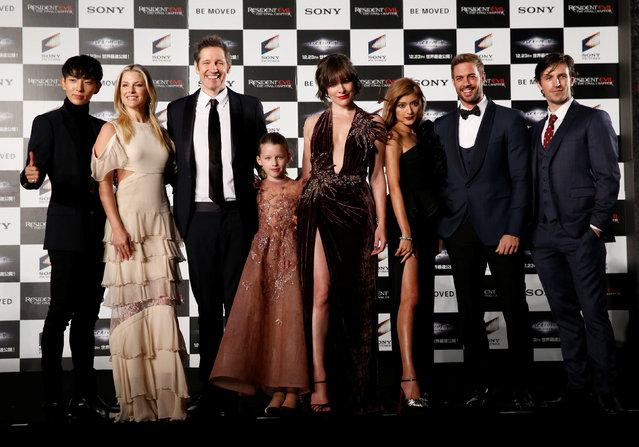 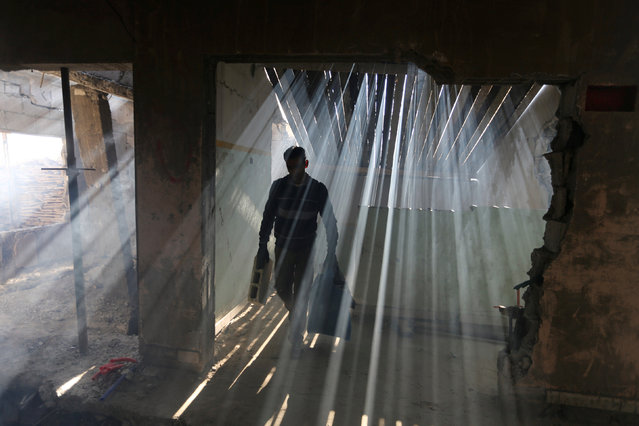 A Palestinian man helps Dutch artist Marjan Teeuwen (not seen) as she creates an architectural work that involves re-assembling wreckage of a house, that was destroyed during 2014, and turning it into artistic structures, in Khan Younis in the southern Gaza Strip December 12, 2016. (Photo by Ibraheem Abu Mustafa/Reuters) 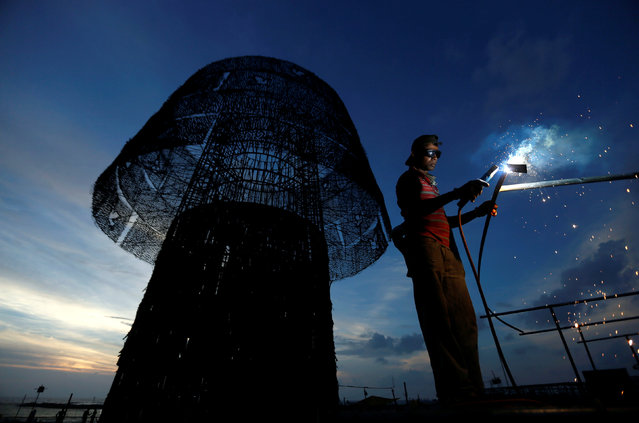 A construction worker of the Sri Lankan Ministry of Ports and Shipping works on a huge Christmas tree in an attempt to construct the world's tallest Christmas tree, in Colombo, Sri Lanka December 13, 2016. (Photo by Dinuka Liyanawatte/Reuters) 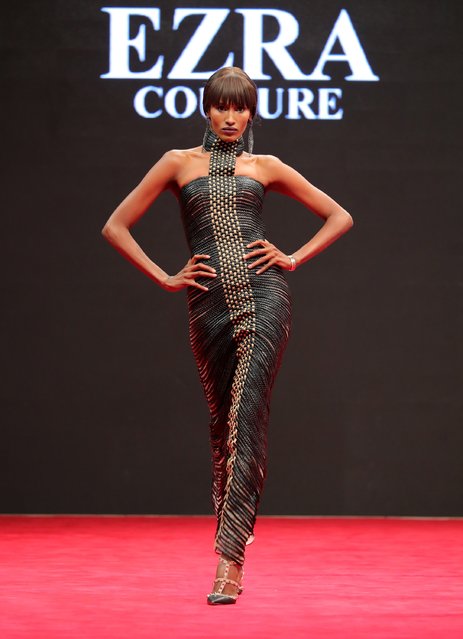 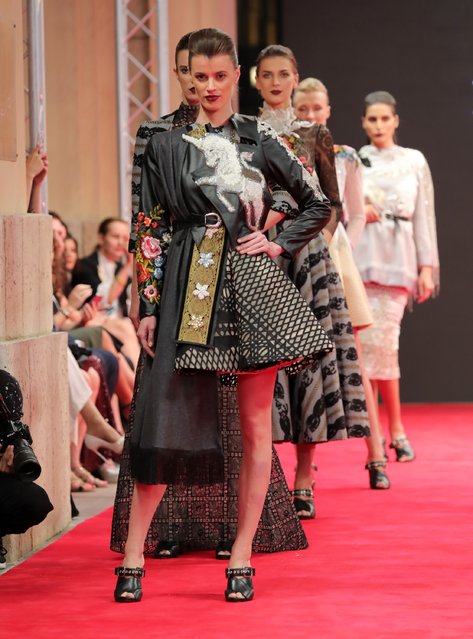 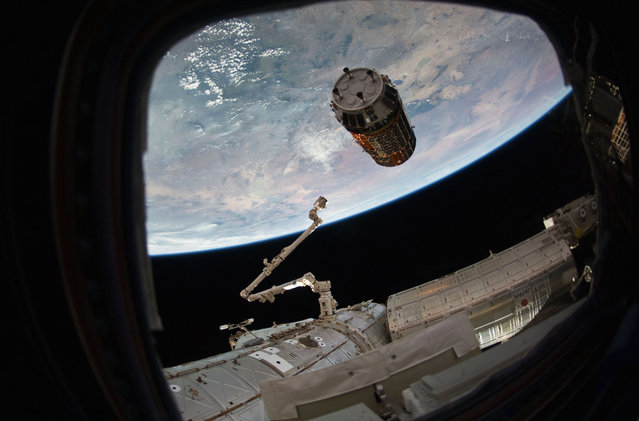 This photo provided by NASA TV shows a Japanese cargo ship before it arrives with Christmas gifts to the International Space Station on Tuesday, December 13, 2016. The capsule – called Kounotori, or white stork – contains nearly 5 tons of food, water, batteries and other supplies. NASA said there also are Christmas presents for the two Americans, three Russians and one Frenchman on board. (Photo by NASA TV via AP Photo) 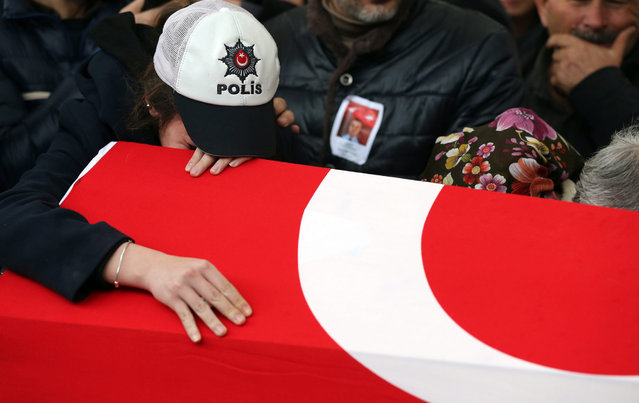 Relatives of police officer Hasim Usta who was killed in bomb attacks outside the Vodafone Stadium in Besiktas on 10th of December mourn over his coffin during the funeral in Istanbul, Turkey, 12 December 2016. At least 44 people were killed and 160 other wounded in two explosions outside Besiktas Stadium and in nearby Macka Park a few hours after the night's soccer match on 10 December. The bombs apparently targeted police officers who were securing the match. (Photo by Tolga Bozoglu/EPA) 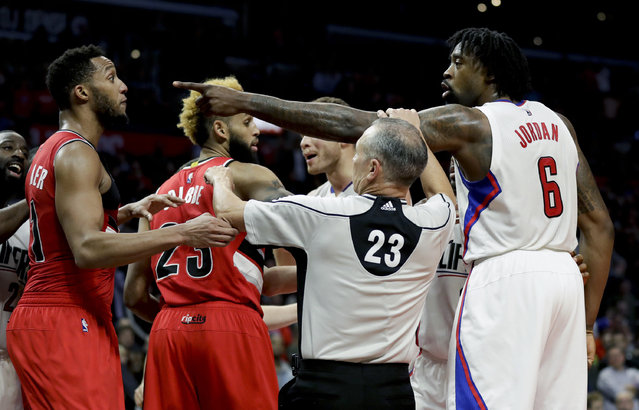 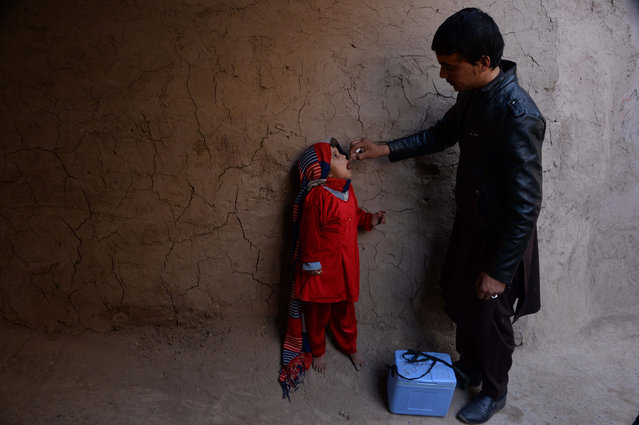 An Afghan health worker administers the polio vaccine to a child during a vaccination campaign on the outskirts of Jalalabad on December 13, 2016. Polio, once a worldwide scourge, is endemic in just three countries now – Afghanistan, Nigeria and Pakistan. (Photo by Noorullah Shirzada/AFP Photo) 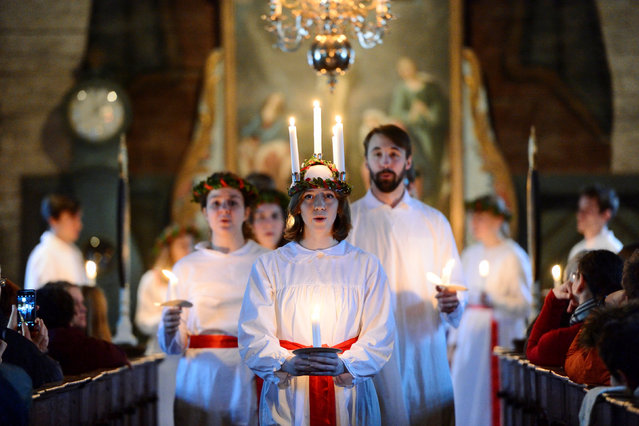