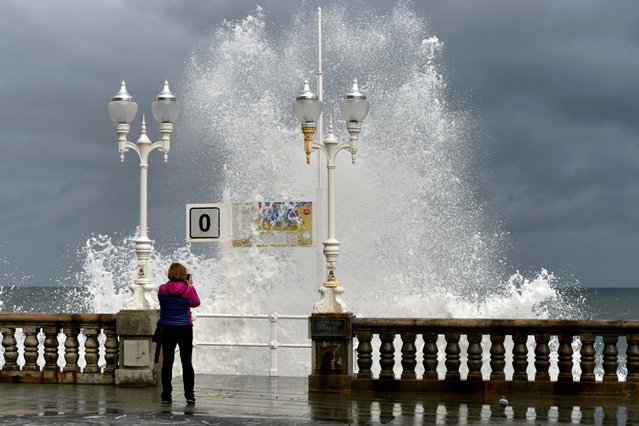 A woman takes pictures as a huge wave crashes against the promenade at San Lorenzo beach in Gijon, Spain December 14, 2017. (Photo by Eloy Alonso/AFP Photo) 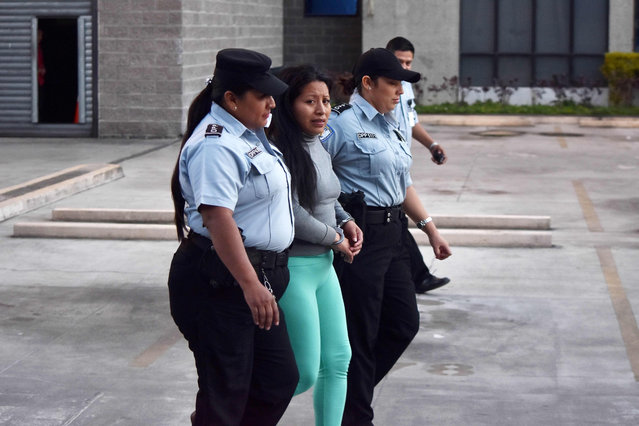 Theodora of Carmen Vasquez (C) is escorted at the end of the hearing held to review her 2008 sentence – handed down under a draconian anti- abortion law after she suffered a miscarriage – in San Salvador on December 13, 2017. Salvadorean justice reviewed on Wednesday the 30- year prison term handed to Vasquez after she was found guilty of “aggravated homicide” for a stillbirth in her ninth month of pregnancy. Her lawyer and rights groups are calling for her to be freed. (Photo by Oscar Rivera/AFP Photo) 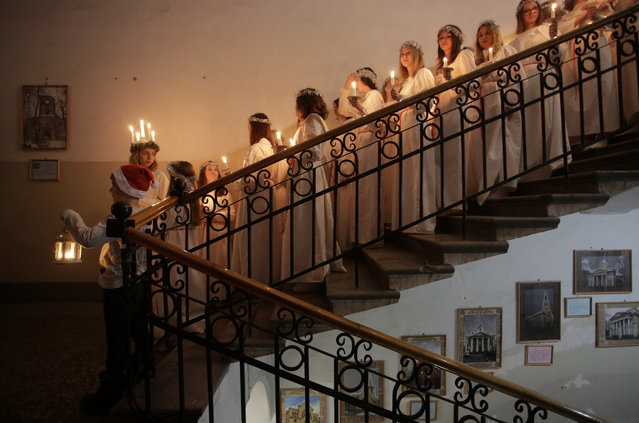 Youths wait to perform during the celebration of St. Lucia's Day at the Swedish Evangelical and Lutheran church of St. Katarina in St. Petersburg, Russia December 13, 2017. (Photo by Anton Vaganov/Reuters) 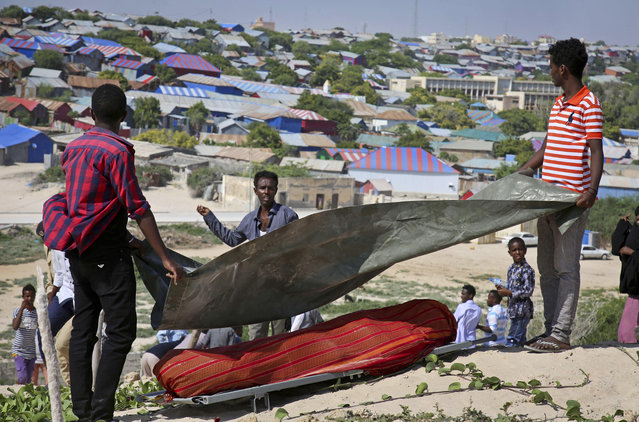 Somali men cover the body of a victim of the suicide bomb attack, before burial, following a suicide bomb attack on a police academy in the capital Mogadishu, Somalia Thursday, December 14, 2017. An Islamic extremist suicide bomber disguised as a police officer killed more than a dozen after infiltrating the Gen. Kahiye Police Academy and detonating explosives strapped around his waist and torso, police said. (Photo by Farah Abdi Warsameh/AP Photo) 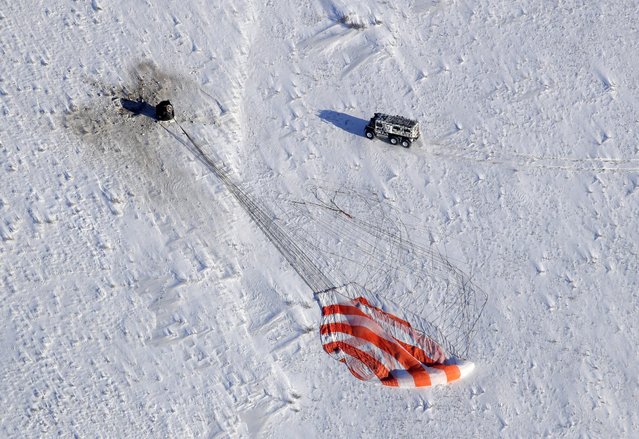 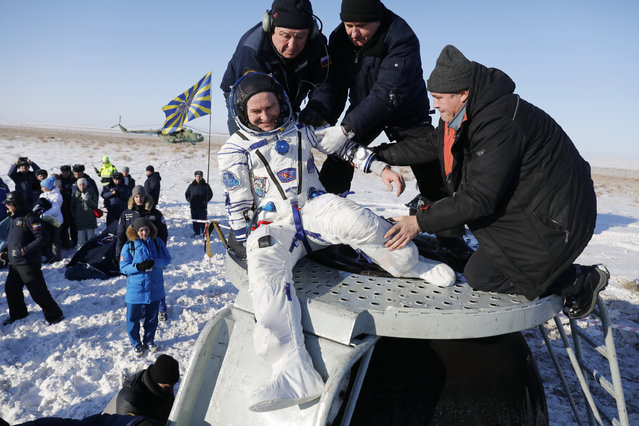 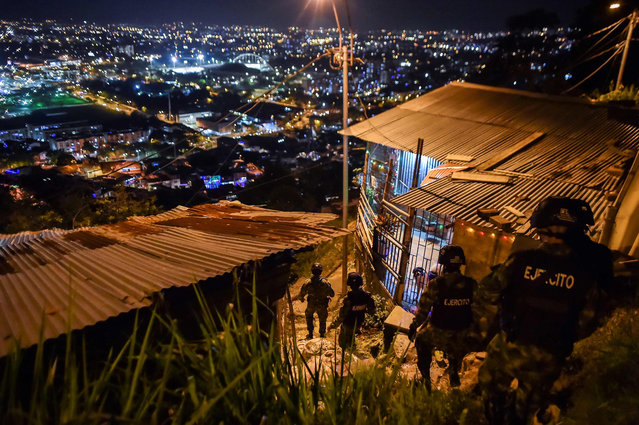 Colombian soldiers patrol the streets of Siloe neighborhood in Cali, Colombia on December 13, 2017. By order of Cali´s Mayor, Maurice Armitage, the army patrols the most dangerous sectors of the city to support security and reduce the high rates of violence. With 2.4 million inhabitants, it is ranked 21 out of the 50 most dangerous cities in the world, according to the Citizen Council for Public Safety and Criminal Justice, an NGO based in Mexico. (Photo by Luis Robayo/AFP Photo) 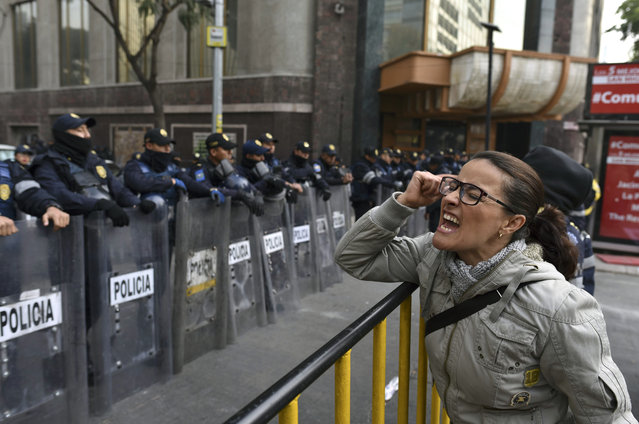 A demonstrator shouts slogans in front of the Senate building during a protest against the potential approval of an Internal Security Law which would allow the army to act as police, in Mexico City, on December 14, 2017. Mexican deputies approved a new security law which provides a legal framework for military deployment, the controversial initiative is being discussed in the Senate. (Photo by Yuri Cortez/AFP Photo) 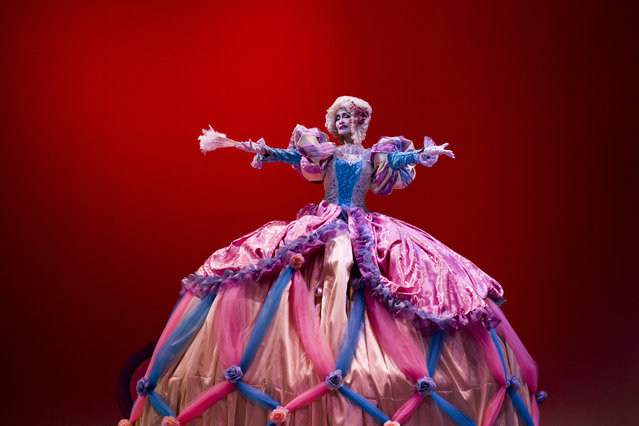 A dancer performs on stage during a presentation of the ballet “The Nutcracker” at the National theatre of Santo Domingo in Santo Domingo, Dominican Republic, 13 December 2017. The companies participating in the show are Ballet Nacional Dominicano, Escuela Nacional de Danza (Endanza) and Ballet Concierto Dominicano. (Photo by Orlando Barria/EPA/EFE) 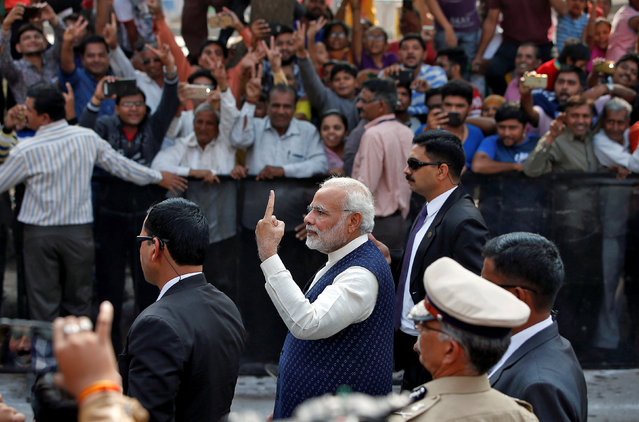 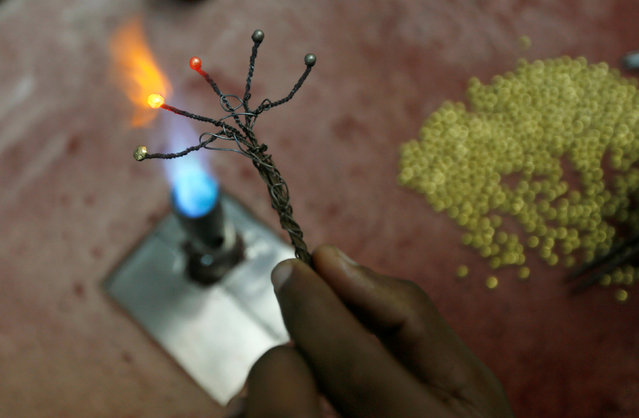 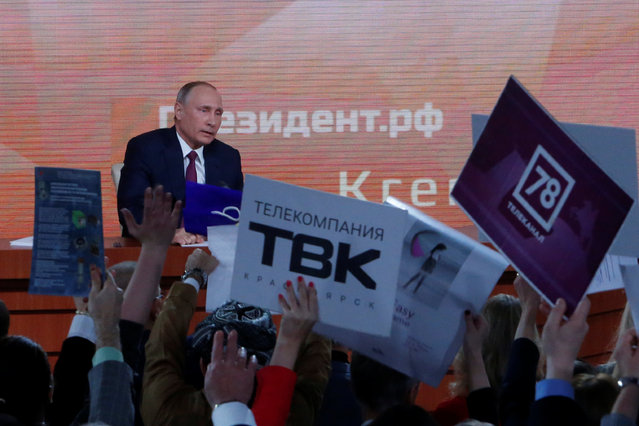 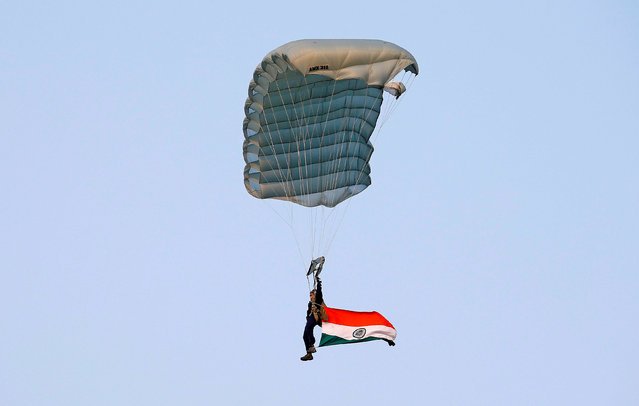 An Indian army paratrooper jumps from a plane carrying an Indian national flag during the “Vijay Diwas”, a ceremony to celebrate the liberation of Bangladesh by the Indian Armed Forces on December 16 in 1971, in Kolkata, India December 14, 2017. (Photo by Rupak De Chowdhuri/Reuters) 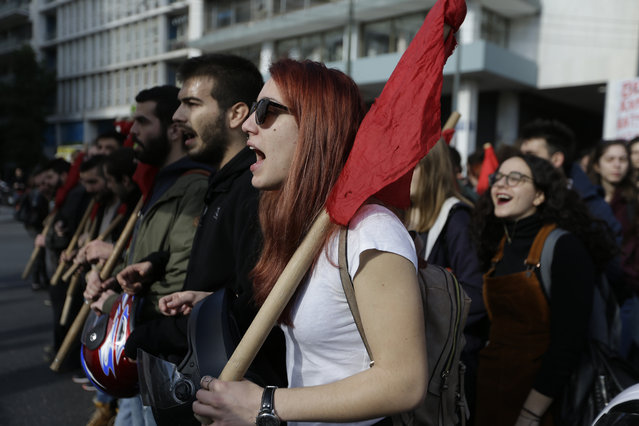 Protesters chants slogans as they march during an demonstration, in central Athens during a 24-hour strike, Thursday, December 14, 2017. Greek workers have walked off their jobs for a 24-hour general strike that is shutting services across the country and suspending ferry services to and from the islands. Unions called Thursday's strike to protest austerity measures that will continue beyond next year's end of Greece's third international bailout package. (Photo by Thanassis Stavrakis/AP Photo) 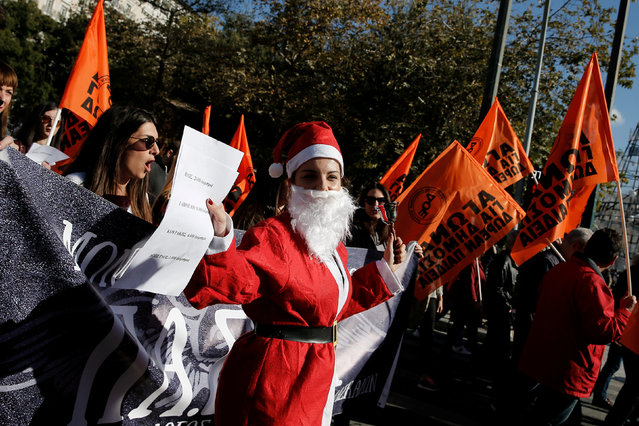 A woman wears a Santa Claus costume as she takes part in a demonstration marking a 24-hour general strike against austerity in Athens, Greece, December 14, 2017. (Photo by Costas Baltas/Reuters) 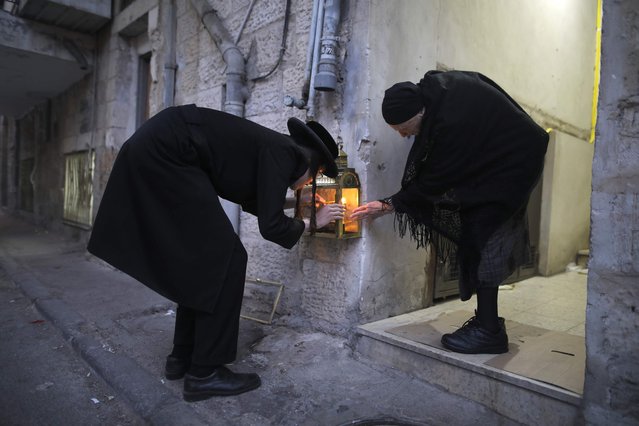 An ultra-Orthodox Jewish man and woman light candles on the second night of the Jewish holiday of Hanukkah, in the Ultra-Orthodox neighbourhood of Mea Shearim of Jerusalem, on December 13, 2017. The holiday commemorates the re-dedication of the holy temple in Jerusalem after the Jews' 165 B.C. victory over the Hellenist Syrians when Antiochus, the Greek King of Syria, outlawed Jewish rituals and ordered the Jews to worship Greek gods. (Photo by Menahem Kahana/AFP Photo) Statuettes of U.S. President Donald Trump and North Korean leader Kim Jong Un, holding a missile, are shown in a shop in Naples, Italy, Thursday, December 14, 2017. Naples' Christmas artisans are at it again, turning figures from current events into ceramic characters to decorate miniature Nativity scenes that take over Italian living rooms this time of year. (Photo by Ciro Fusco/ANSA via AP Photo) 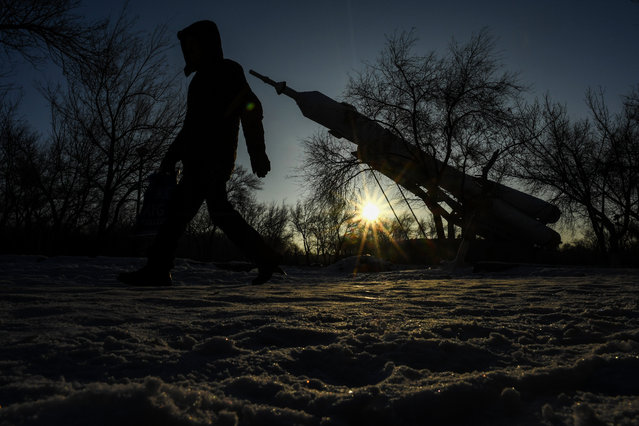 A man walks in front of a Soyuz rocket installed as a monument in Baikonur city, near the Russian leased Kazakh Baikonur cosmodrome on December 14, 2017.
The temperature in Baikonur falls to 11 C (13 F) degrees below zero, but due to wind and humidity it feels more like -18 C (0 F). (Photo by Kirill Kudryavtsev/AFP Photo) 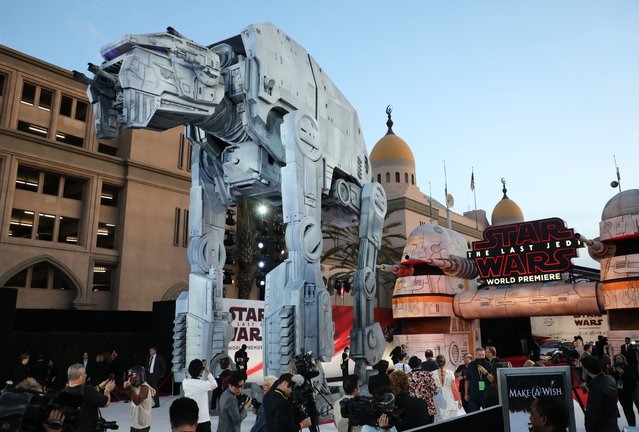