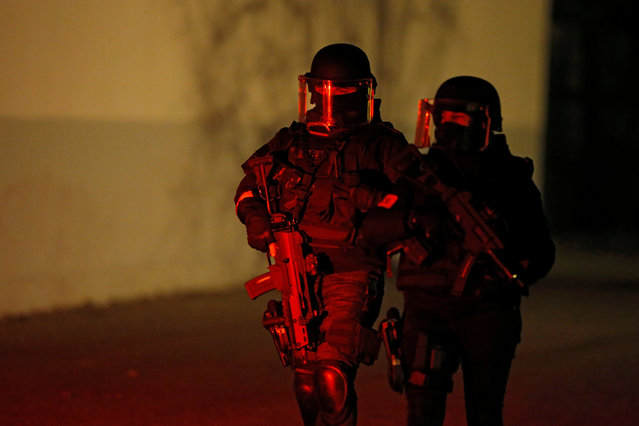 French special police forces secure an area during a police operation in the Meinau district after the deadly shooting in Strasbourg, France, December 13, 2018. (Photo by Vincent Kessler/Reuters) 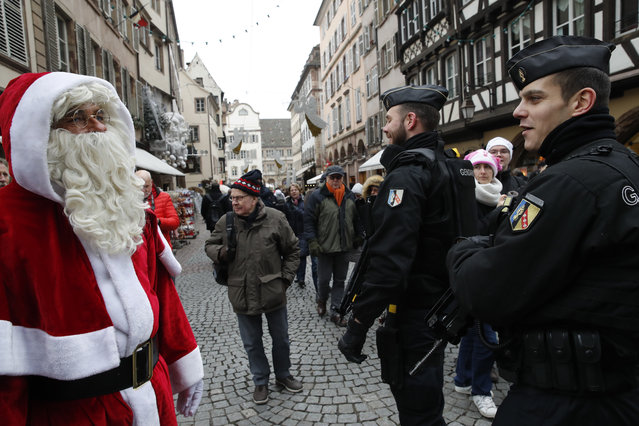 A man dressed like a Santa Claus watches police officers patrolling near the Christmas market reopens in Strasbourg, eastern France, Friday, December 14, 2018. The man authorities believe killed three people during a rampage near a Christmas market in Strasbourg died Thursday in a shootout with police at the end of a two-day manhunt, French authorities said. (Photo by Christophe Ena/AP Photo) 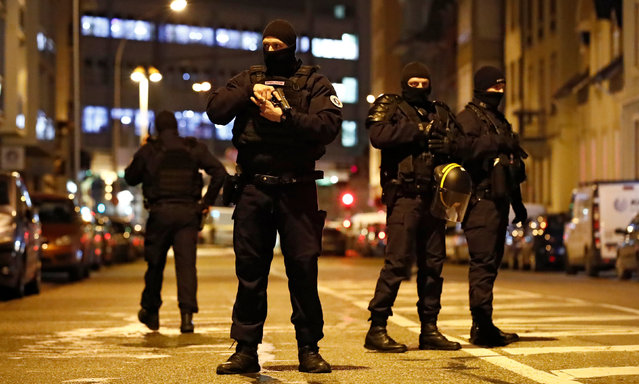 French special police forces secure an area during a police operation where the suspected gunman, Cherif Chekatt, who killed three people at a Christmas market in Strasbourg, was killed, in the Meinau district in Strasbourg, France, December 13, 2018. (Photo by Christian Hartmann/Reuters) 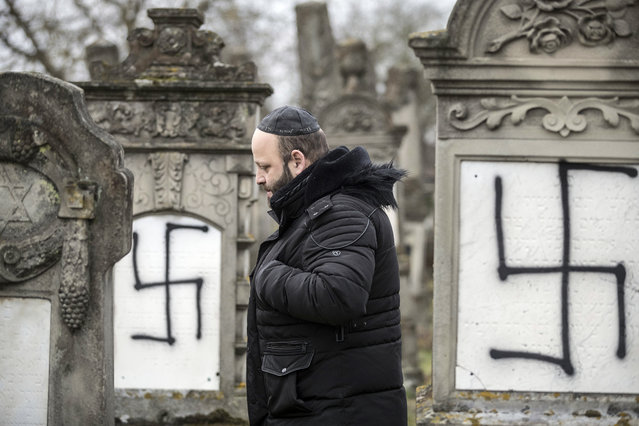 A member of the Jewish community walks among defaced gravestones at the Jewish cemetery of Herrlisheim, near Strasbourg, eastern France, Friday, December 14, 2018. 37 gravestones and a monument for Holocaust victims have been tagged with anti-Semitic graffiti. The graffiti that include Nazi symbols were discovered on Tuesday, hours before a gunman sprayed gunfire near the Christmas market of Strasbourg. (Photo by Jean-Francois Badias/AP Photo) 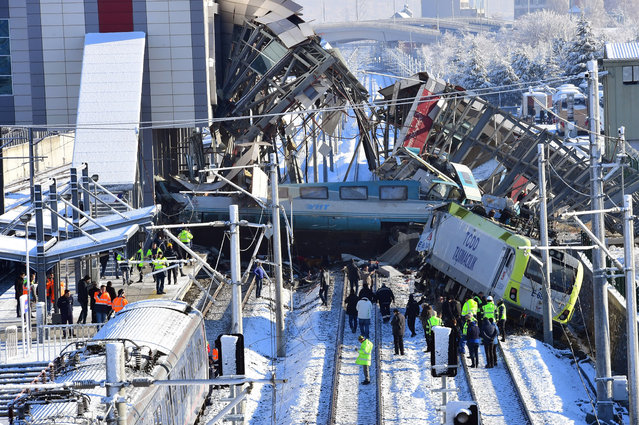 Members of rescue services work at the scene of a train accident in Ankara, Turkey, Thursday, December 13, 2018. A high-speed train hit a railway engine and crashed into a pedestrian overpass at a station in the Turkish capital Ankara on Thursday, killing more than 5 people and injuring more than 40 others, officials and news reports said. (Photo by Depo Photos/Rex Features/Shutterstock) 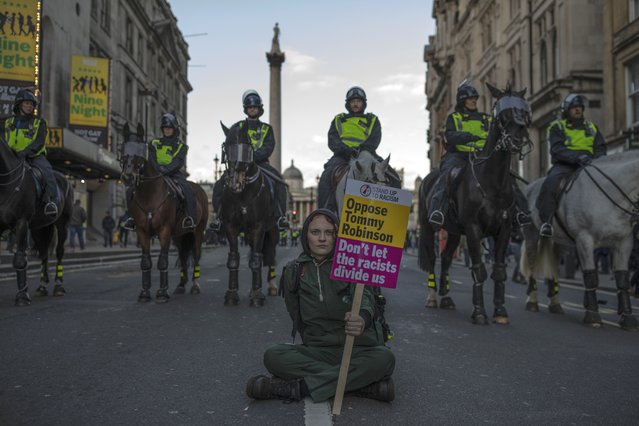 A woman sits in front of a line of Police Horses during a UKIP-backed Brexit betrayal rally in central London on December 9, 2018 in London, England. The demonstration takes place three days before parliament is due to make the crucial vote on Theresa May's Brexit deal with the European Union. (Photo by Dan Kitwood/Getty Images) Police stand guard as people attend a protest against the new labour law in front of the Parliament building in Budapest, Hungary, December 12, 2018. (Photo by Bernadett Szabo/Reuters) 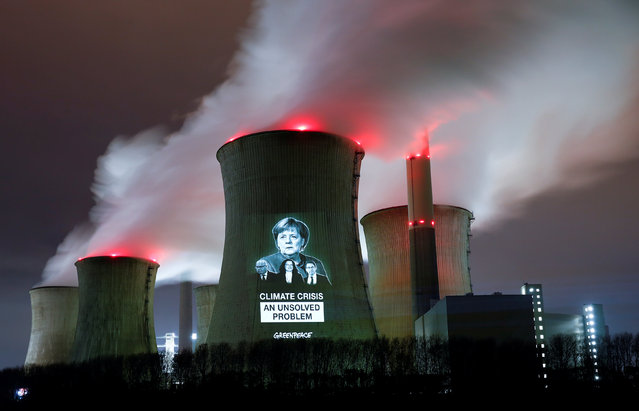 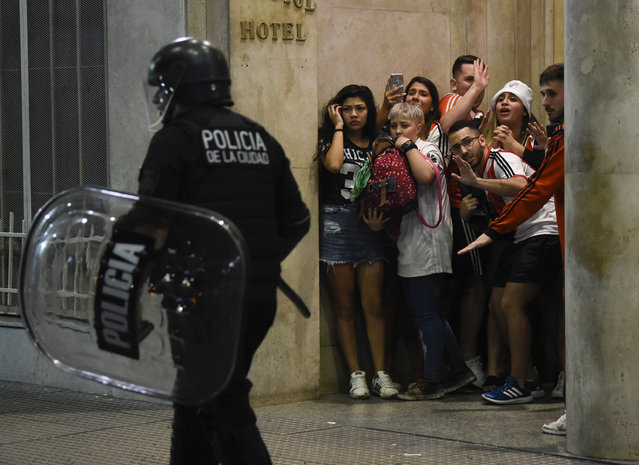 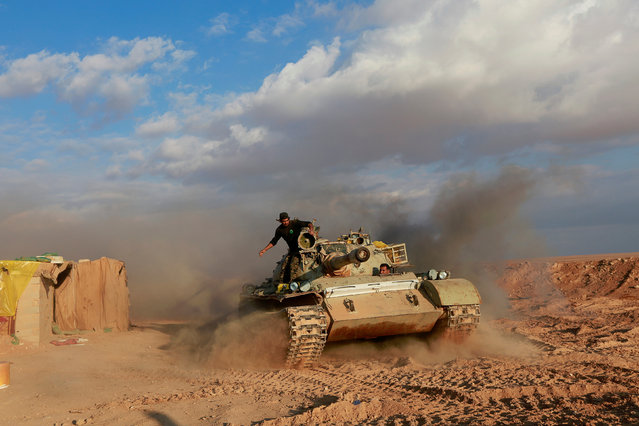 Popular Mobilisation Forces (PMF) fighters ride in a tank near the Iraqi-Syrian border in al-Qaim, Iraq on December 12, 2018. (Photo by Alaa al-Marjani/Reuters) 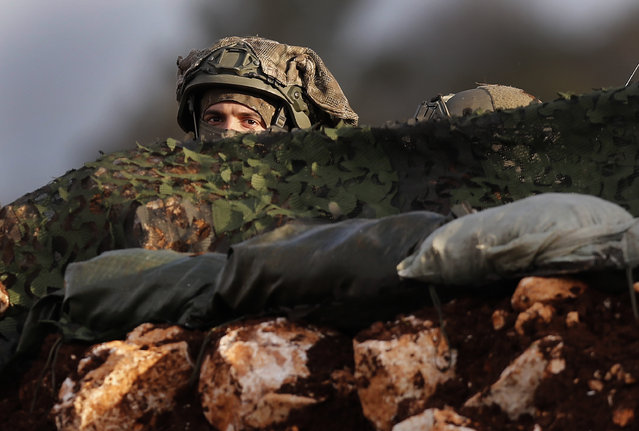 In this Thursday, December 13, 2018 photo, an Israeli soldier looks out from one of their new positions, near the southern border village of Mays al-Jabal, Lebanon. As Israeli excavators dig into the rocky ground, Lebanese across the frontier gather to watch what Israel calls the Northern Shield operation aimed at destroying attack tunnels built by Hezbollah. But Lebanese soldiers in new camouflaged posts, behind sandbags, or inside abandoned homes underscore the real anxiety that any misstep could lead to a conflagration between the two enemy states that no one seems to want. (Photo by Hussein Malla/AP Photo) 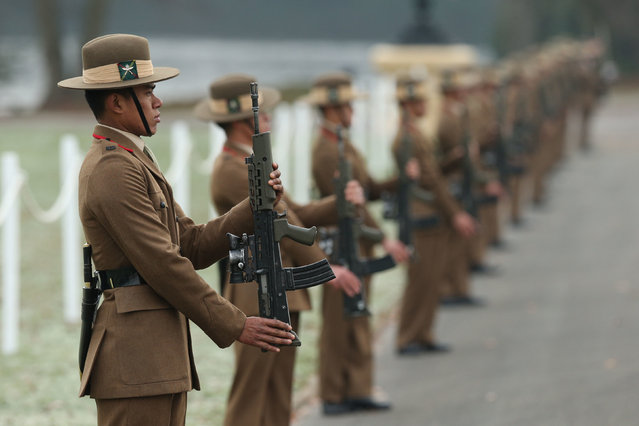 Soldiers from the Gurkha Company wait ahead of the arrival of the Duke of Cambridge, who will represent the Queen as the Reviewing Officer at The Sovereign's Parade at Royal Military Academy Sandhurst in Camberley, UK on December 14, 2018. (Photo by Jonathan Brady/PA Wire Press Association) 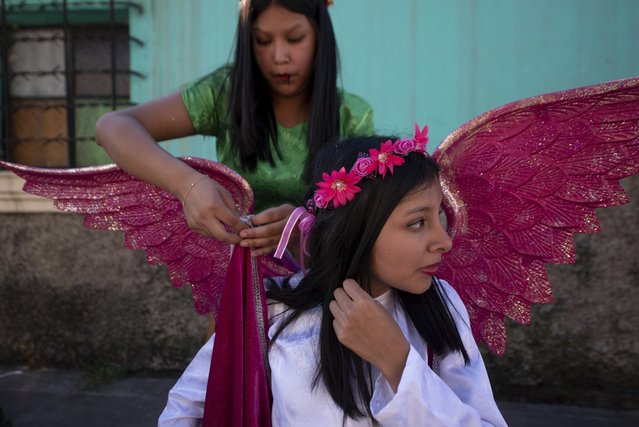 Jennifer Lopez, top, and her sister Jessica adjust their angel costumes prior to a procession symbolizing the fight between good and evil to celebrate the Virgin of the Immaculate Conception in Ciudad Vieja, Guatemala, Friday, December 7, 2018. Catholics hold their neighbor days-long annual fair in honor of their patron saint, the Virgin of the Immaculate Conception, whose official feast day is Dec. 8. (Photo by Santiago Billy/AP Photo) Young women sing carols as they hold candles to celebrate St. Lucia's Day in the Evangelical Lutheran Church of Saint Katarina in St.Petersburg, Russia, Thursday, December 13, 2018. The Church was built in the 19th century by and for Swedish expatriates in Saint Petersburg, and it is usually called the Swedish church. In Soviet era the Church used as a sport hall. St. Lucia is the patron saint of vision. (Photo by Dmitri Lovetsky/AP Photo) 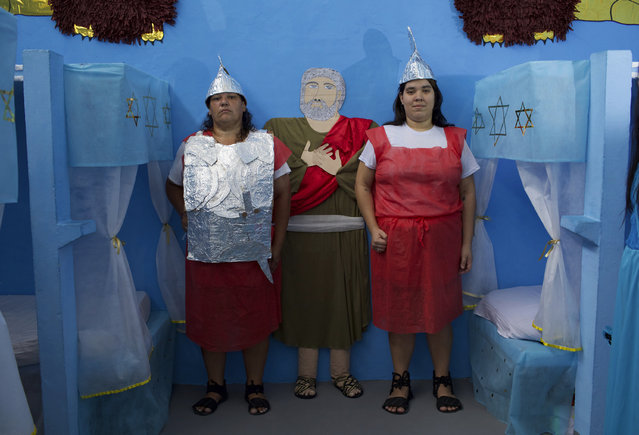 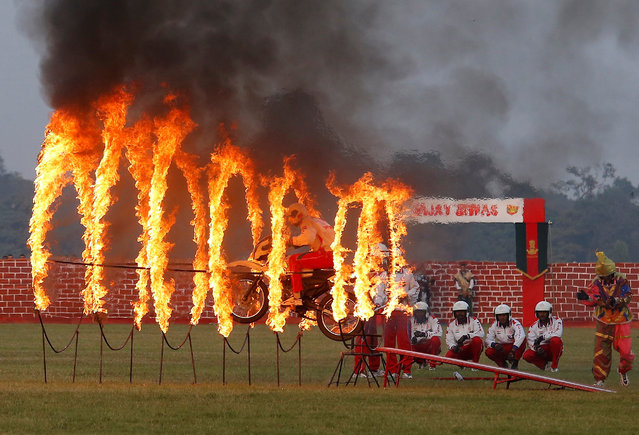 An Indian army soldier performs a stunt during celebrations ahead of the “Vijay Diwas”, a ceremony to celebrate the liberation of Bangladesh by the Indian Armed Forces on December 16 in 1971, in Kolkata, India, December 14, 2018. (Photo by Rupak De Chowdhuri/Reuters) 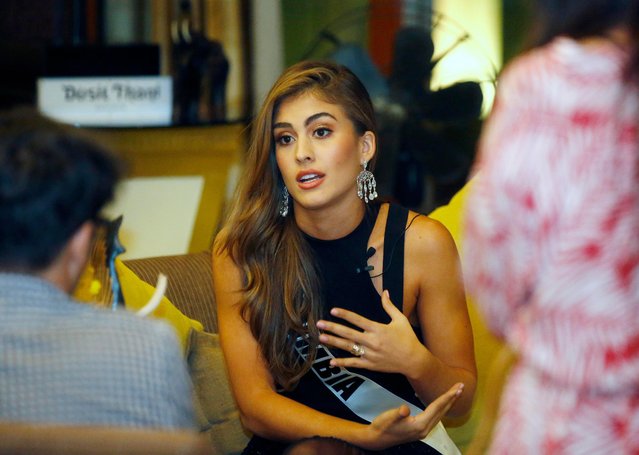 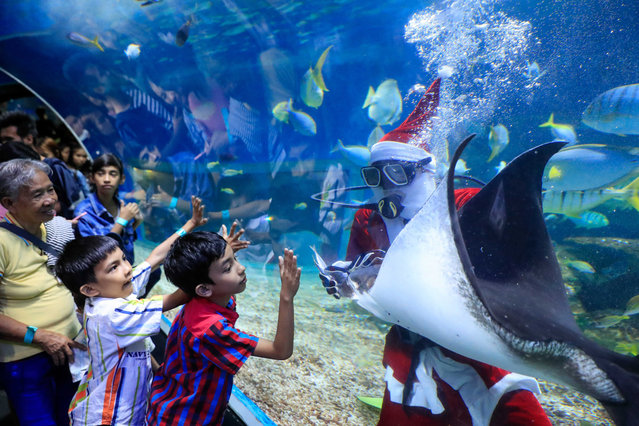 A diver dressed as Santa Claus feeds a marine animal as children look on at the Manila Ocean Park in Manila, Philippines, 14 December 2018. The activity served as a Christmas attraction for the season. (Photo by Mark R Cristino/EPA/EFE) 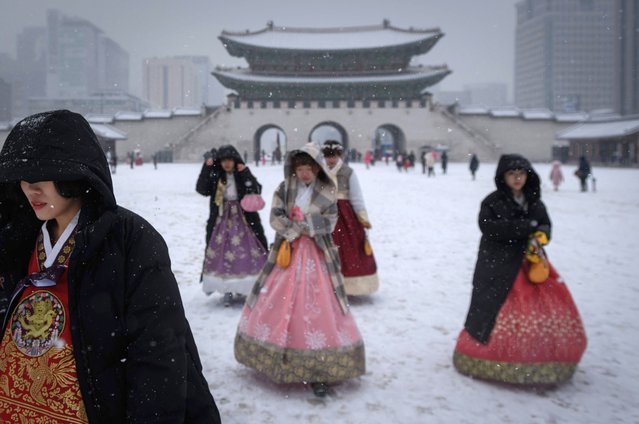 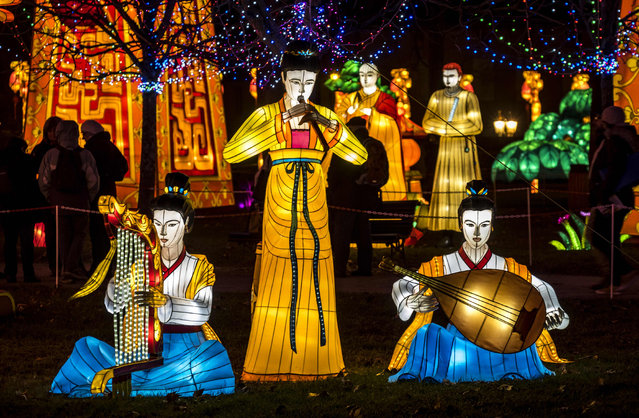 Visitors look at giant lanterns installed at the Foucaud Park in Gaillac, southwestern France, on the occasion of the Lantern Festival, on December 12, 2018. Monumental silk sculptures are exhibited in Gaillac from December 1, 2018 to February 6, 2019, as part of the Chinese traditional Lantern Festival marking the end of celebrations for the Chinese Lunar New Year period. (Photo by Eric Cabanis/AFP Photo) 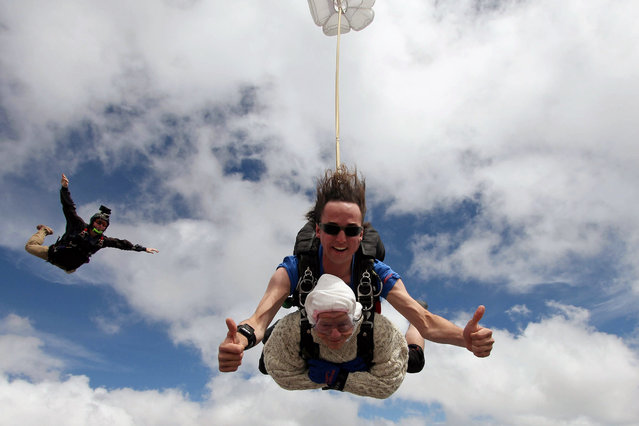 This handout taken on December 9, 2018 and released by SA Skydiving shows 102-year-old great-grandmother Irene OShea during her skydive tandem jump over Wellington in South Australia. A 102-year-old great-grandmother is believed to have become the world's oldest skydiver after plunging 14,000 feet (4,300 metres) through the South Australian sky. She completed her first skydive to mark her 100th birthday in 2016, but organisers claimed it was the successful tandem dive on December 9 at the age of 102 years and 194 days that earned her a place in the history books. (Photo by Bryce Sellick and Matt Teager/AFP Photo/SA Skydiving) 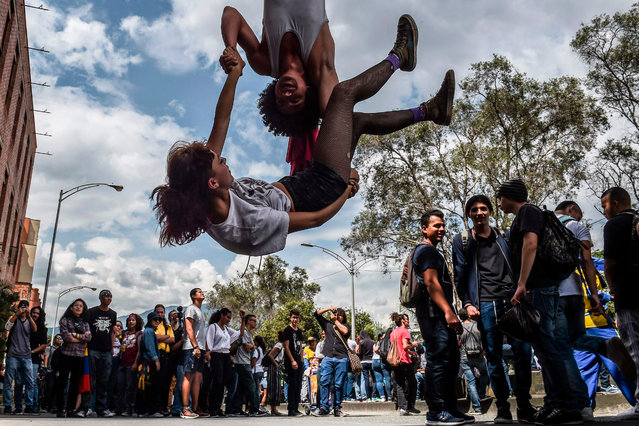