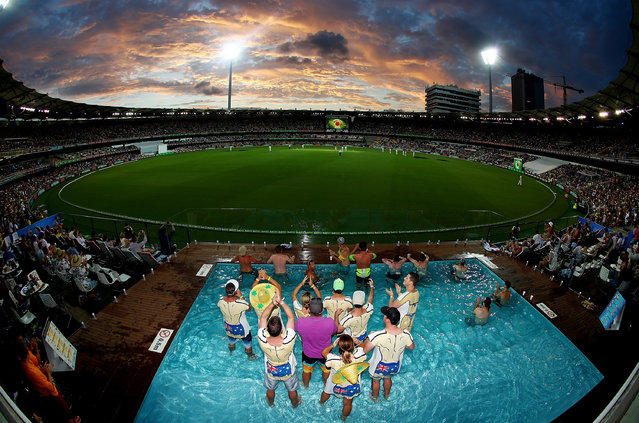 Fans enjoy the pool deck during day two of the First Test match between Australia and Pakistan at The Gabba on December 16, 2016 in Brisbane, Australia. (Photo by Chris Hyde – CA/Cricket Australia/Getty Images) 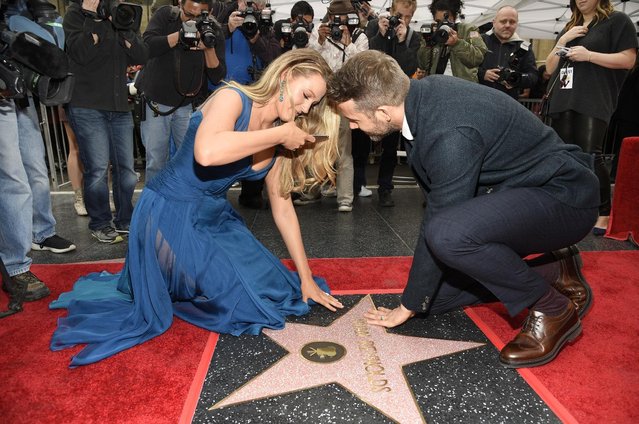 Actor Ryan Reynolds, right, joins his wife, actress Blake Lively, as she photographs his new star on the Hollywood Walk of Fame following a ceremony on Thursday, December 15, 2016, in Los Angeles. (Photo by Chris Pizzello/Invision/AP Photo) 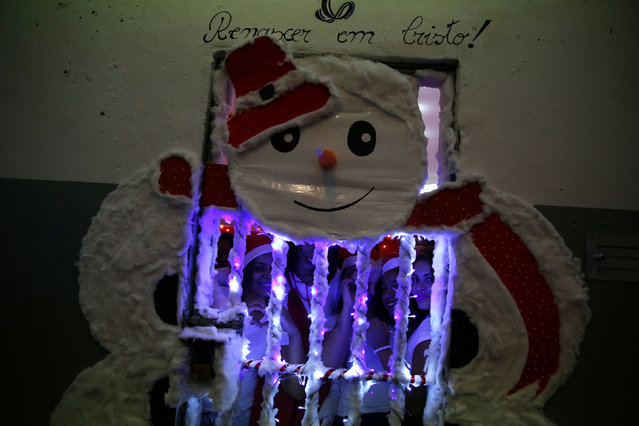 Prisoners look through the bars of their prison cell during a Christmas decorating event “Bright prison cell” at the Nelson Hungria prison in Rio de Janeiro, Brazil December 15, 2016. (Photo by Pilar Olivares/Reuters) 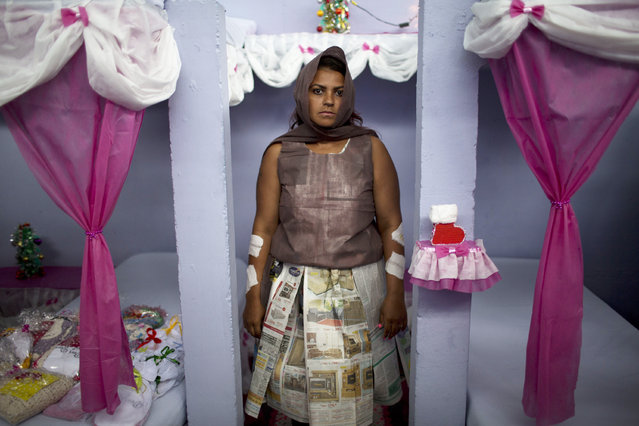 A prisoner waits to perform during the 7th annual Nelson Hungria prison’s Christmas event that includes a cell decorating contest and a skit dramatizing biblical stories, in Rio de Janeiro, Brazil, Thursday, December 15, 2016. Inmates who are serving time for offenses from burglary to homicide, spent weeks decking out the cell blocks with the holiday decorations they created. The inmates used materials they had access to behind bars such as plastic bottles, paper, ground-up Styrofoam and aluminum trays. (Photo by Silvia Izquierdo/AP Photo) 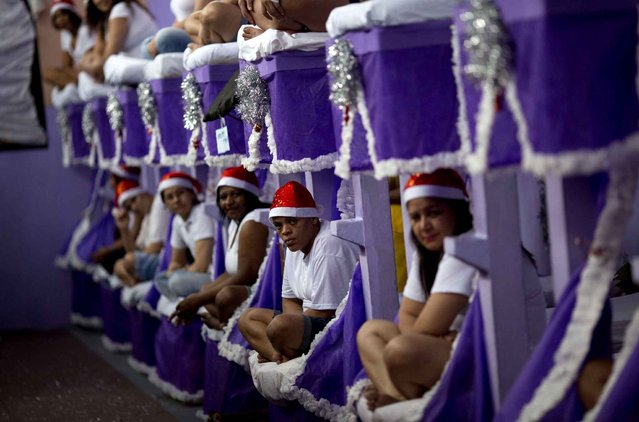 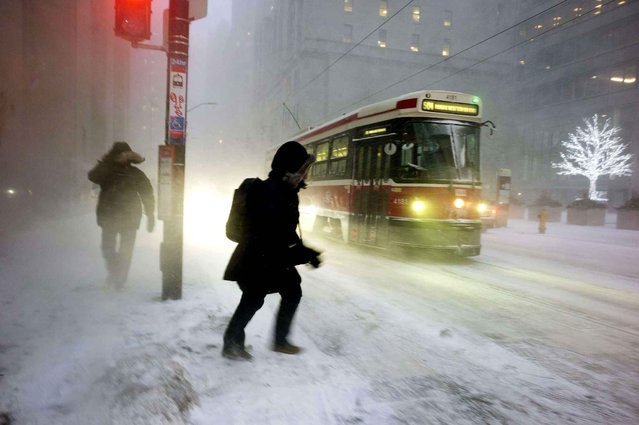 A person makes their way to a streetcar as snow flies through the air during a squall in downtown Toronto, on Thursday, December 15, 2016. (Photo by Graeme Roy/The Canadian Press via AP Photo) 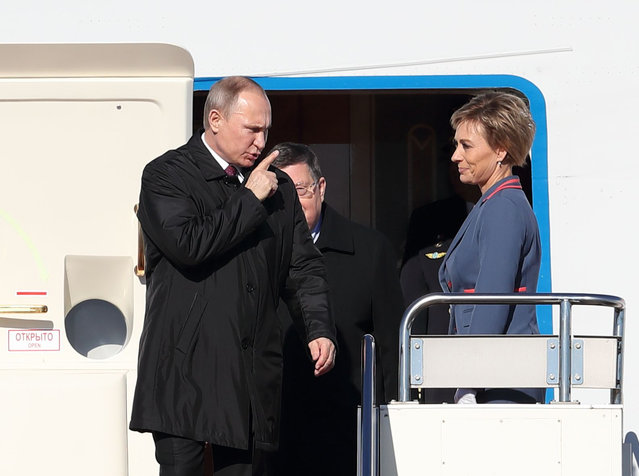 Russian President Vladimir Putin is seen on arrival at Haneda International Airport on December 16, 2016 in Tokyo, Japan. Putin is on a two-day tour to Japan. (Photo by Okauchi/Rex Features/Shutterstock) 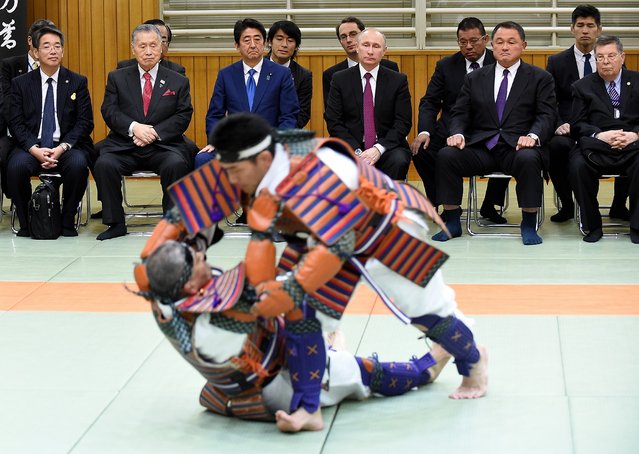 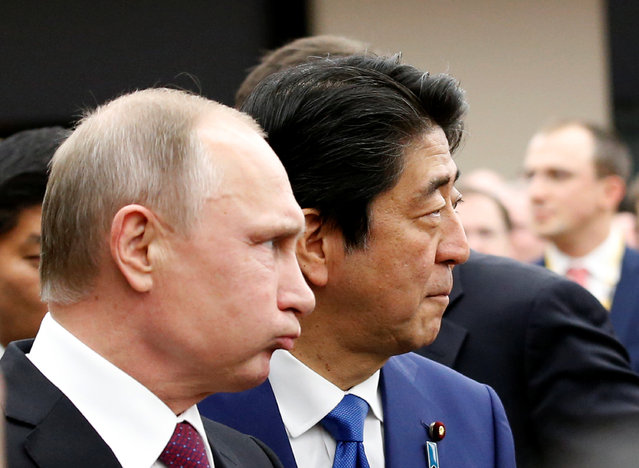 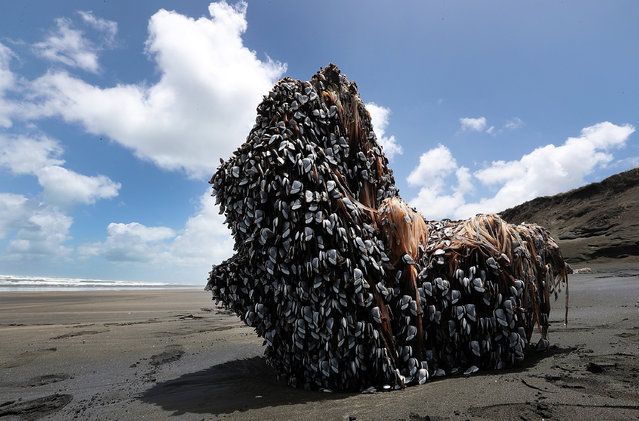 A large driftwood tree covered in gooseneck barnacles sits in the sun on Auckland's west coast on December 12, 2016 in Auckland, New Zealand. The large object washed up on Muriwai beach on Saturday, 10 December. (Photo by Fiona Goodall/Getty Images) 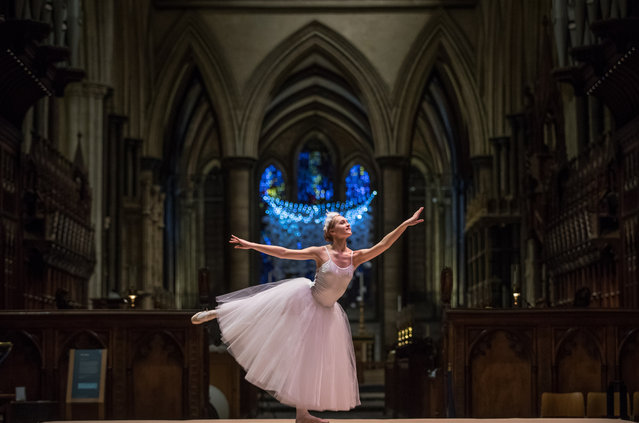 Ballerina Emily Harper dances during the dress rehearsal of A Winter's Trail, a new promenade drama being held at Salisbury Cathedral on December 15, 2016 in Salisbury, England. The performance by the Hoodwink Theatre Company, which runs this weekend, is described as a playful journey through the Cathedral after dark, following a trail of winter memories in a magical story told in laughter, lights, singing and dancing, that weaves together childhood and old age. (Photo by Matt Cardy/Getty Images) 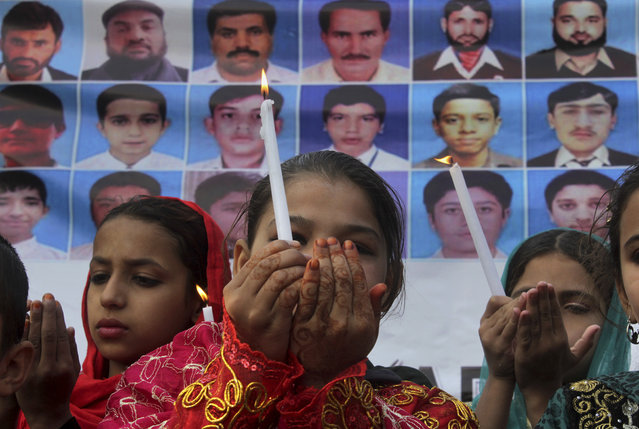 Pakistani children hold candles and pray for victims of an attack on a Peshawar school in 2014, during a ceremony to mark second anniversary of the attack, in Peshawar, Pakistan, Friday, December 16, 2016. Pakistani Taliban militants attacked an army-run school in Peshawar, killing more than 150 people, mostly children, on Dec. 16. 2014. (Photo by Muhammad Sajjad/AP Photo) 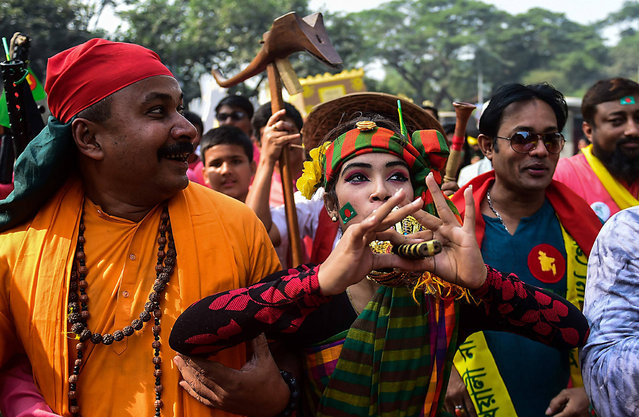 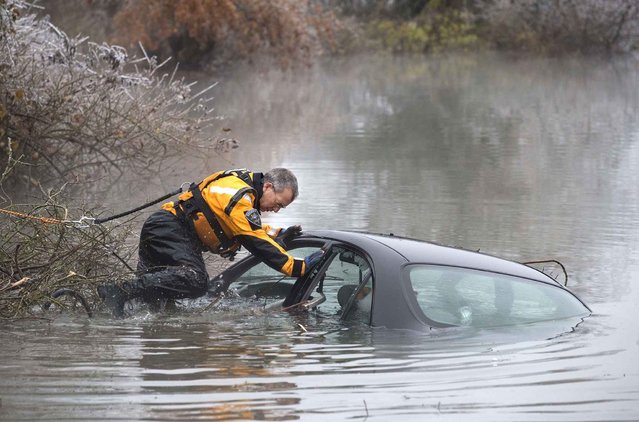 A Lane County Sheriffs deputy works to remove a car that crashed in the Maxwell pond on Northwest Express Way in Eugene, Ore., Thursday, December 15, 2016. (Photo by Collin Andrew/The Register-Guard via AP Photo) 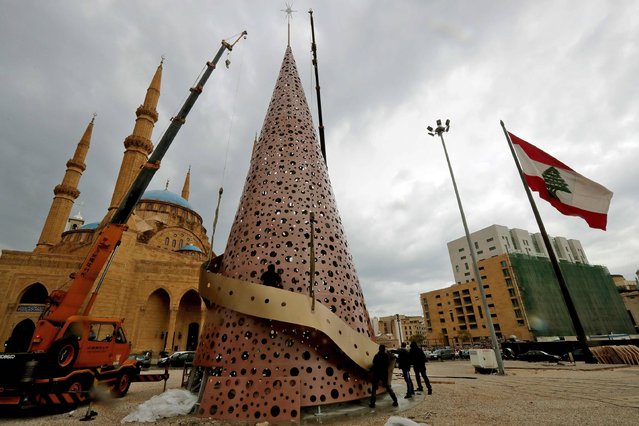 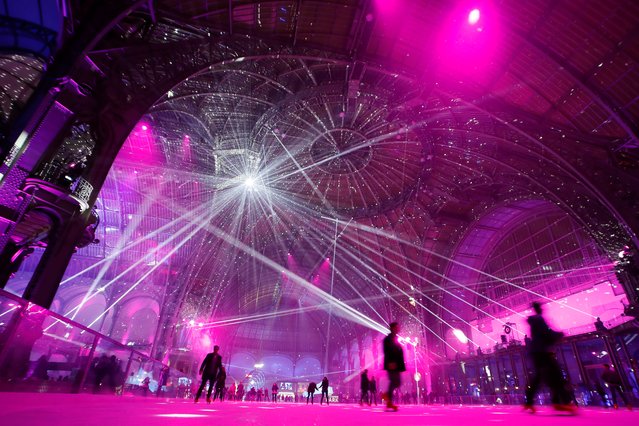 People skate on the ice skating rink hosted at the glass-roofed central hall of the Grand Palais in Paris, during the opening nigth party on December 15, 2016. (Photo by Thomas Samson/AFP Photo) 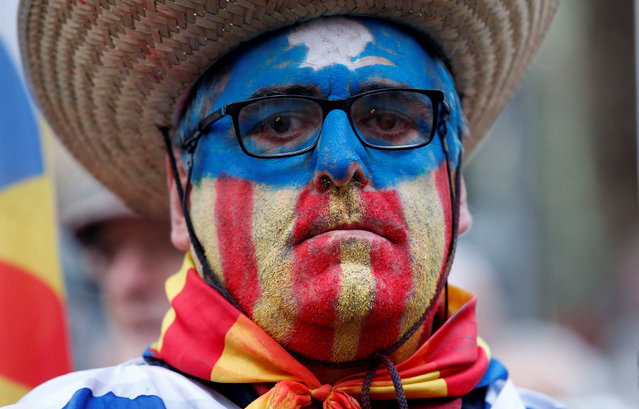 A supporter of Catalunya Parliament's President Carme Forcadell, with an estelada (Catalan separatist flag) painted on his face, is pictured in front of the court in Barcelona, Spain, December 16, 2016. (Photo by Albert Gea/Reuters) 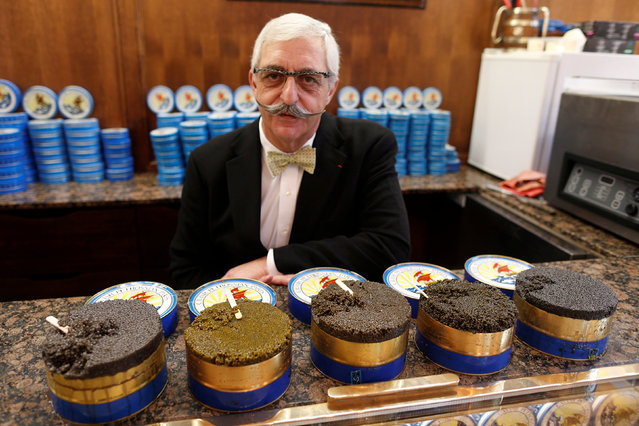 Armen Petrossian, CEO of Petrossian, son of the brand's Armenian founder and one of the world's oldest and largest caviar specialists, poses with tin cans of caviar inside his shop in Paris, France, December 13, 2016. (Photo by Charles Platiau/Reuters) 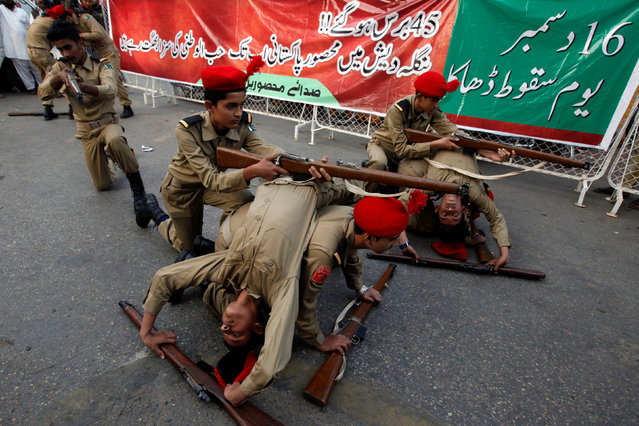 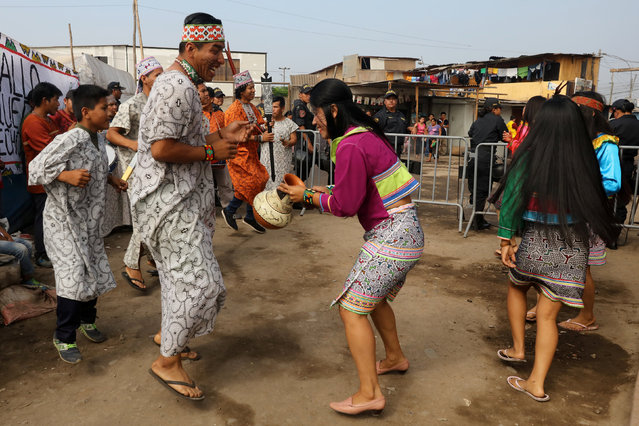 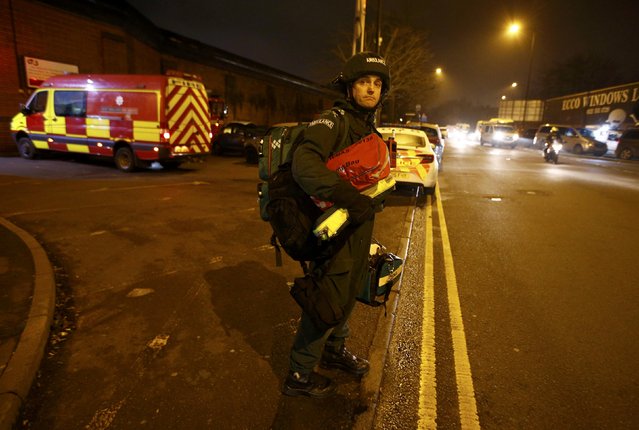 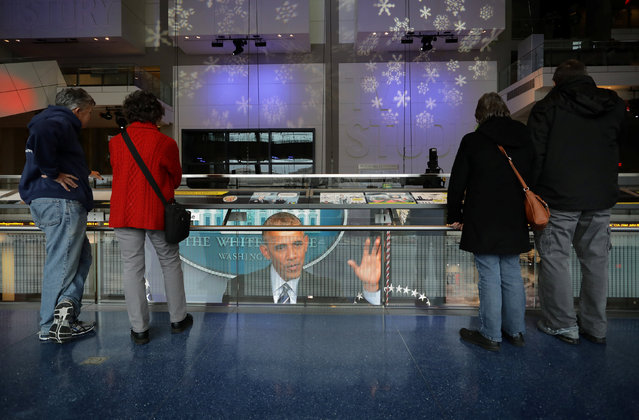 People watch U.S. President Barack Obama on a large screen inside the Newseum as he participates in his last news conference of the year in Washington, U.S., December 16, 2016. (Photo by Kevin Coombs/Reuters) 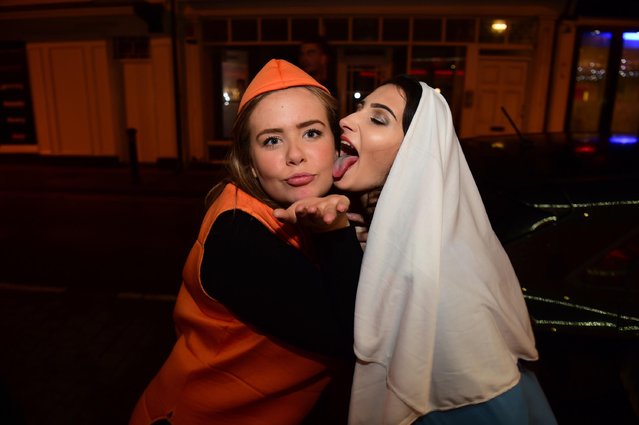