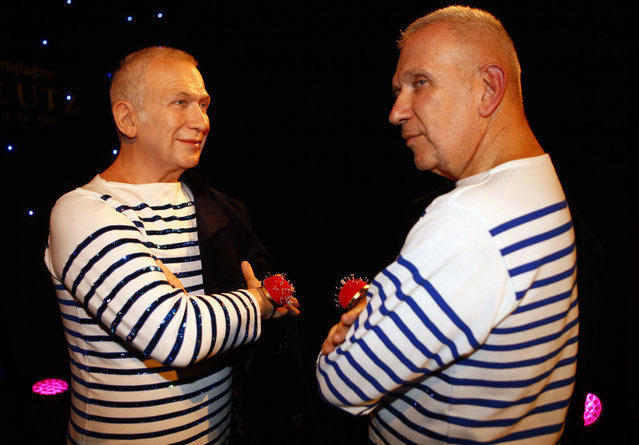 Fashion designer Jean Paul Gaultier, right, poses next to the life-size wax model presented by the Grevin Museum in Paris, Monday, December 18, 2017. The Grevin Museum was founded in 1882 and is one of the oldest wax museum in Europe. (Photo by Francois Mori/AP Photo) 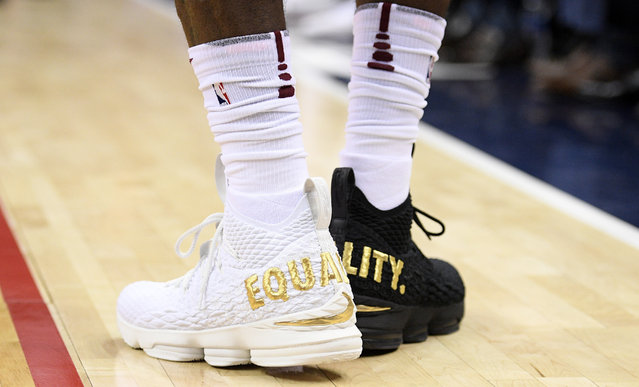 Cleveland Cavaliers forward LeBron James' shoes are emblazoned with “EQUALITY” on both heels during the first half of an NBA basketball game against the Washington Wizards, Sunday, December 17, 2017, in Washington. (Photo by Nick Wass/AP Photo) 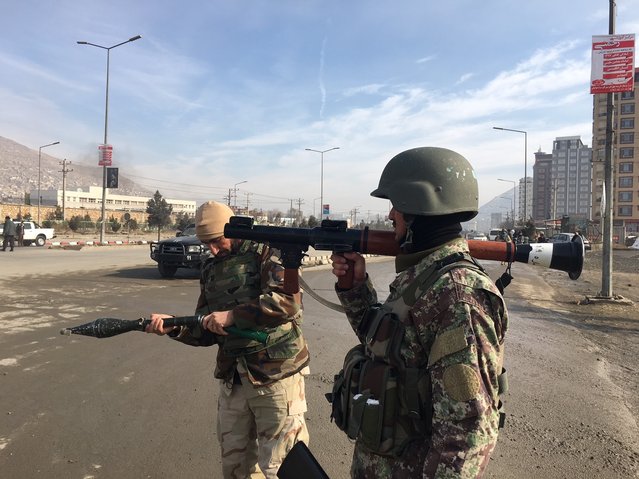 Afghan security personnel arrive at the site of complex attack at an intelligence training center in Kabul, Afghanistan, Monday, December 18, 2017. An Afghan official says an attack is underway in the country's capital where gunmen have raided and occupied a partially constructed building near the intelligence training center in western Kabul. (Photo by Rahmat Gul/AP Photo) 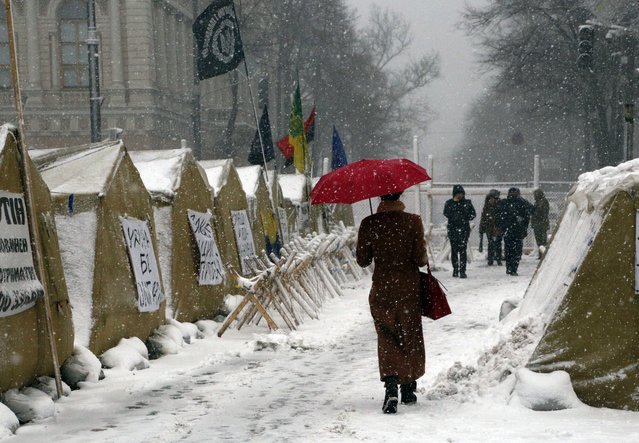 Under heavy snowfall a woman passes by a tent camp placed by supporters of the Movement of New Forces, the political party led by Mikheil Saakashvili in front of the parliament building in Kiev, Ukraine, Monday, December 18, 2017. The streets around Parliament have been the scene of recent protests demanding the resignation of Ukrainian President Petro Poroshenko. (Photo by Efrem Lukatsky/AP Photo) 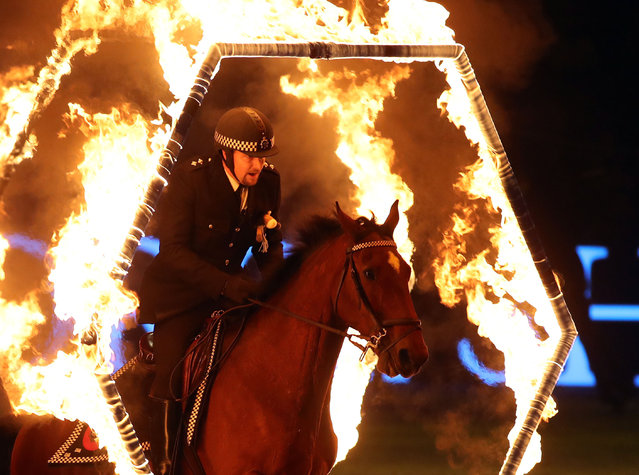 The Metropolitan Police Activity Ride perform during day six of the London International Horse Show at the Olympia exhibition center in London, England on December 17, 2017. (Photo by Steve Parsons/PA Images via Getty Images) 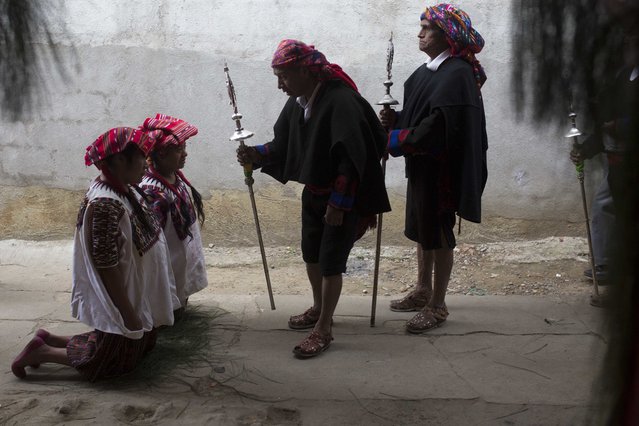 Women kneel to welcome the guardians of St. Thomas' to the home where the statue of the Catholic icon has been under the care of a family, during festivities in honor of the patron Saint of Chichicastenango, Guatemala, Monday, December 18, 2017. The ongoing celebration honors the Mayan town's patron saint until Dec. 23. (Photo by Luis Soto/AP Photo) 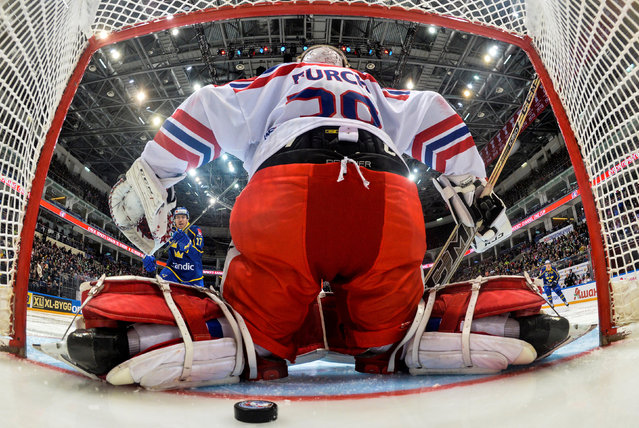 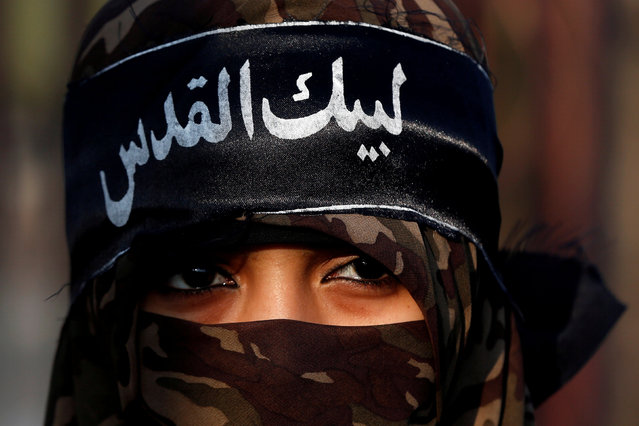 A supporter of religious and political party Jamaat-e-Islami (JI) wears a head band that reads in Urdu, “I am here Al Quds” as she attends a rally against U.S. President Donald Trump's decision to recognize Jerusalem as the capital of Israel, in Karachi, Pakistan December 17, 2017. (Photo by Akhtar Soomro/Reuters) 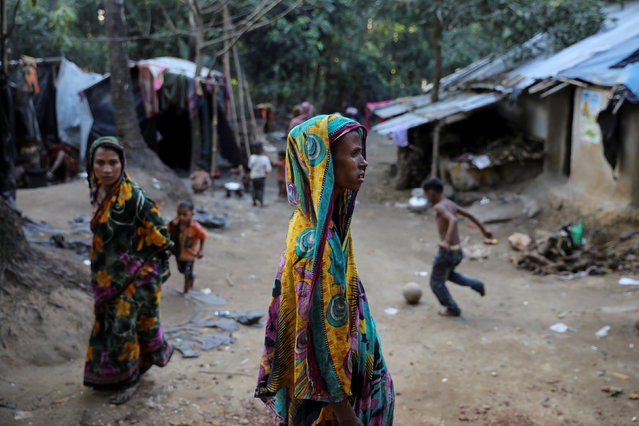 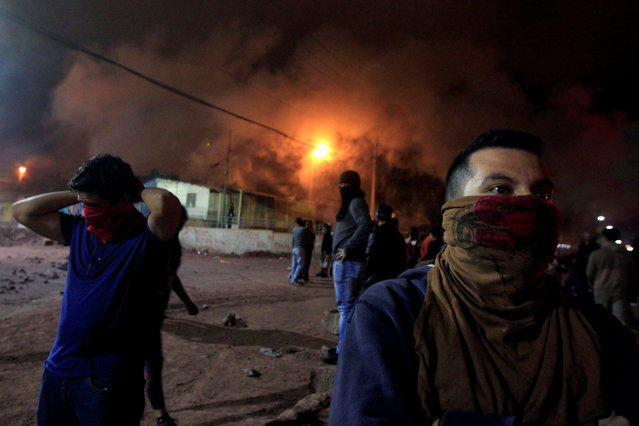 Opposition supporters strand on a barricade, during a protest over the disputed presidential election in Tegucigalpa, Honduras December 17, 2017. (Photo by Jorge Cabrera/Reuters) 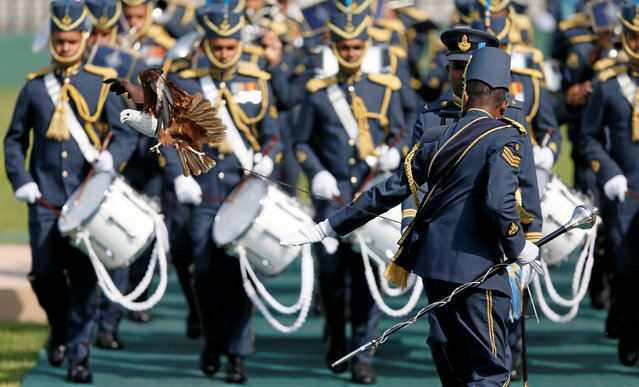 An eagle, the symbol of Sri Lanka's Air Force flies away as a soldier attempts to control it during a welcome ceremony for Malaysia's Prime Minister Najib Razak (not pictured) in Colombo, Sri Lanka December 18, 2017. (Photo by Dinuka Liyanawatte/Reuters) 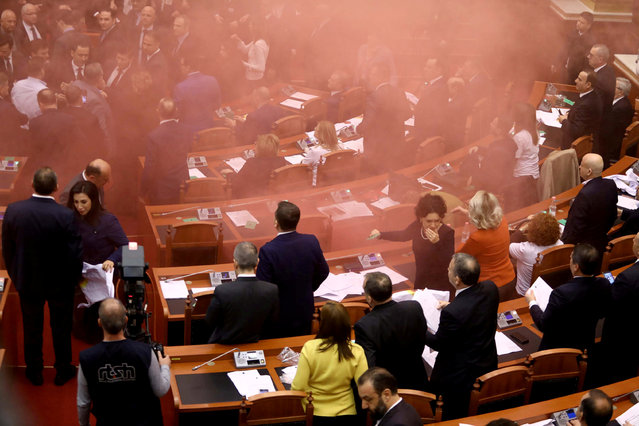 Albania's opposition lawmakers throw smoke bombs inside the Parliament during the election of the new prosecutor, in Albanian Parliament in Tirana, Albania December 18, 2017. (Photo by Reuters/Stringer) 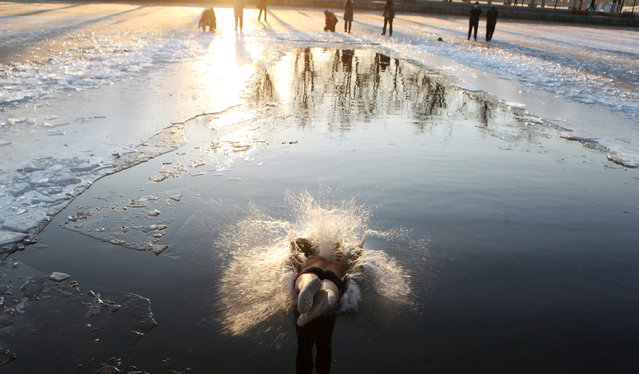 A winter swimmer dives into the icy waters of a river at a park in Shenyang, Liaoning province, China December 18, 2017. (Photo by Reuters/China Stringer Network) 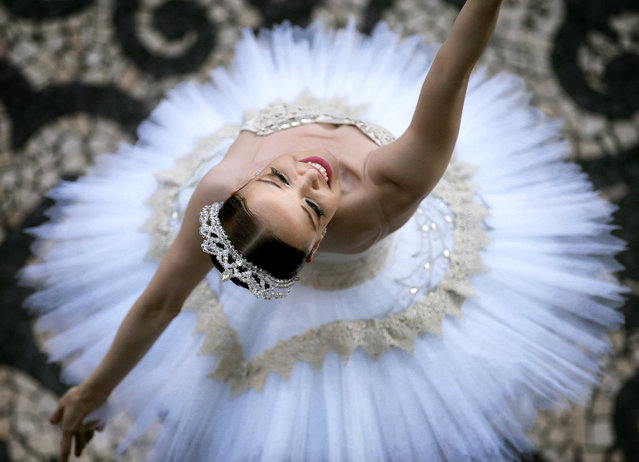 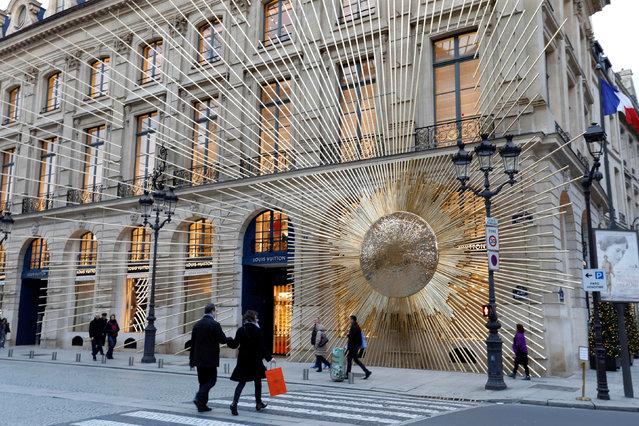 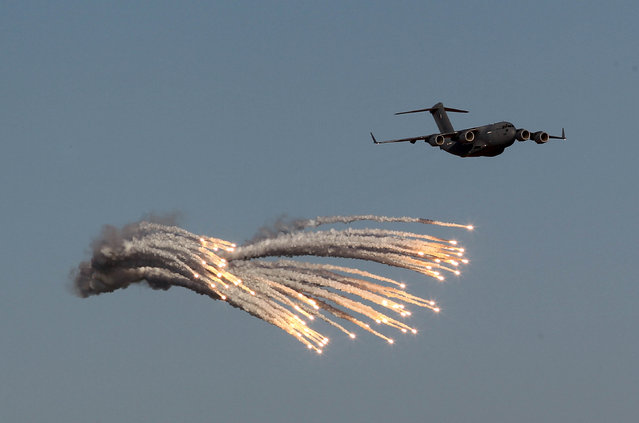 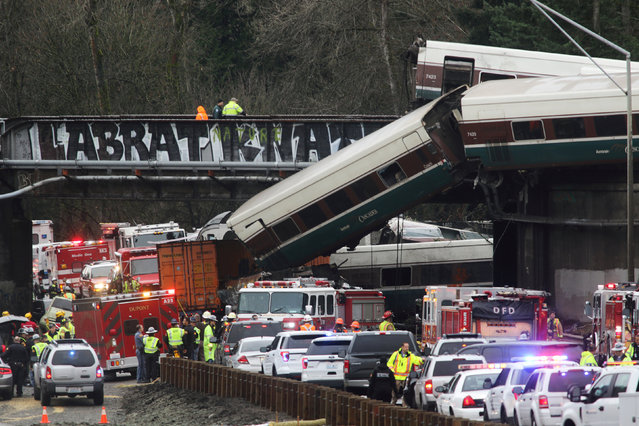 First responders are at the scene of an Amtrak passenger train which derailed and is hanging from a bridge over the interstate highway (I-5) in DuPont, Washington, U.S., December 18, 2017. (Photo by Nick Adams/Reuters) 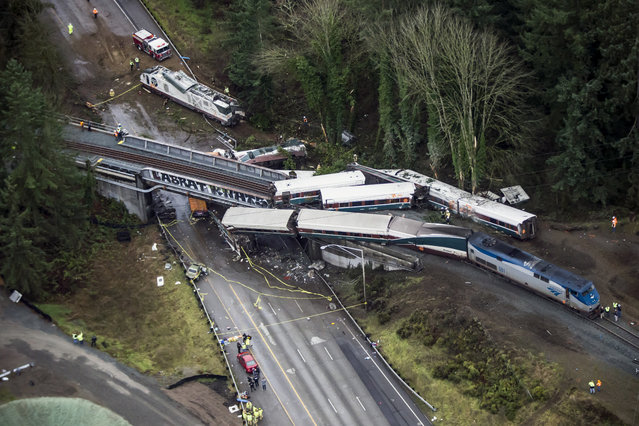 Cars from an Amtrak train that derailed lie spilled onto Interstate 5, Monday, December 18, 2017, in DuPont, Wash. The Amtrak train making the first-ever run along a faster new route hurtled off the overpass Monday near Tacoma and spilled some of its cars onto the highway below, killing several people, authorities said. (Photo by Bettina Hansen/The Seattle Times via AP Photo) 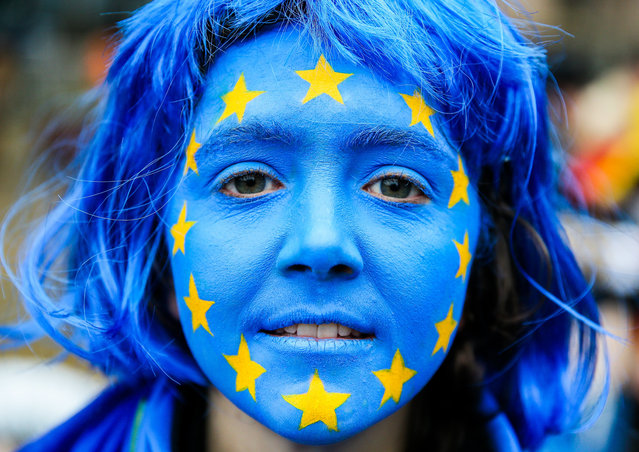 An actor has her face painted in the colors of the European Union flag as she joins a joint protest action titled “EU At the Energy Crossroads” of “Climate Action Network Europe”, “Friends of the Earth Europe”, “Greenpeace” and “World Wildlife Fund” (WWF) to highlight the decision on Clean Energy laws facing European governments, on the sidelines of an EU Transport, Telecommunications and Energy (TTE) ministers council meeting, in front of the European Council in Brussels, Belgium, 18 December 2017. EU Energy Ministers are expected to finalize their position on the “Clean Energy Package” of legislative proposals that will guide energy policy all across Europe for the next decade. (Photo by Stephanie Lecocq/EPA/EFE) 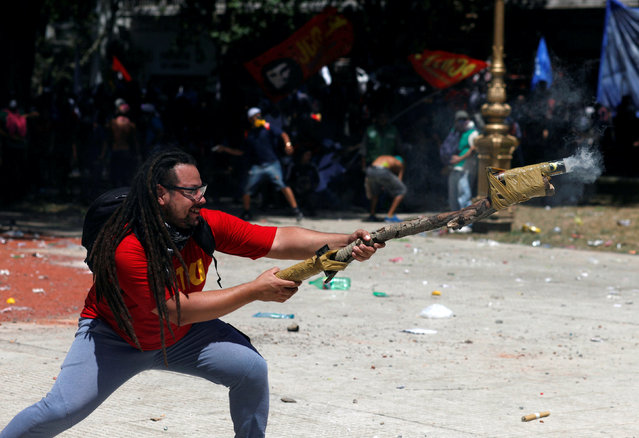 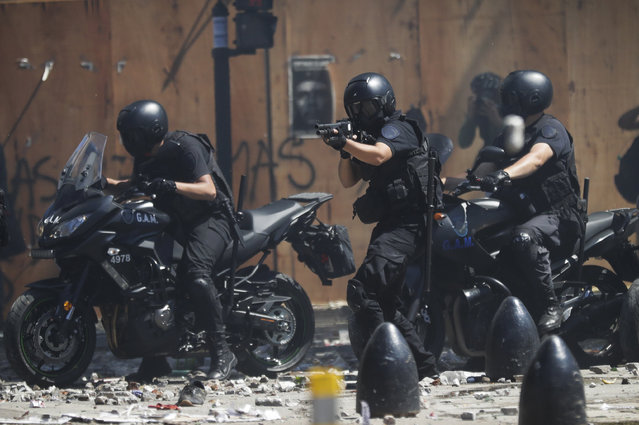 Motorized police fire rubber bullets at protesters during a general strike against a pension reform measure, outside Congress in Buenos Aires, Argentina, Monday, December 18, 2017. Union leaders complain the legislation, which already passed in the Senate, would cut pension and retirement payments as well as aid for some of poor families. (Photo by Victor R. Caivano/AP Photo) 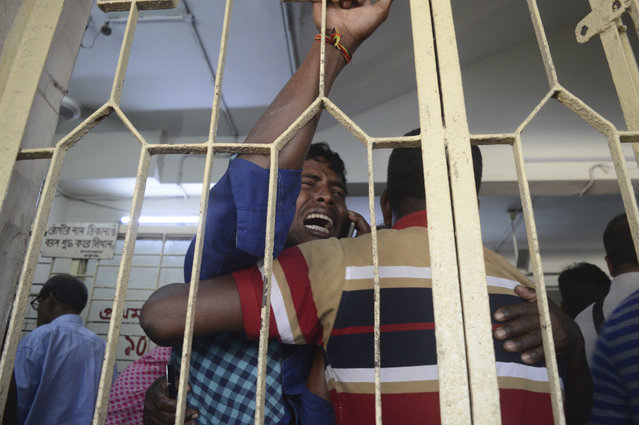 An unidentified relative of a stampede victim cries at the Chittagong medical hospital, in Chittagong, Bangladesh, Monday, December 18, 2017. Police in Bangladesh say at least 10 people have been killed and another 40 injured in a stampede at a jam-packed religious ritual for a popular mayor who died last week. (Photo by AP Photo/Stringer) 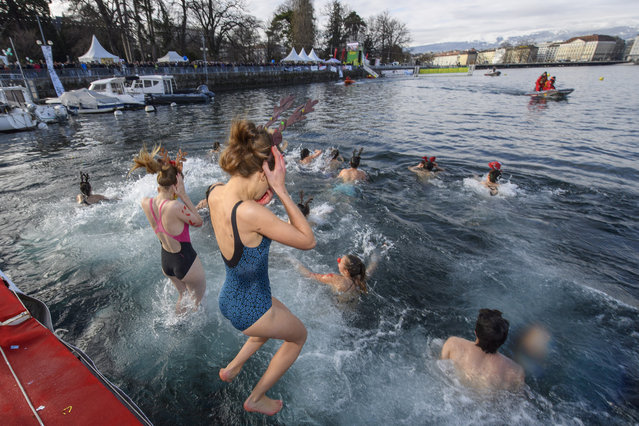 Participants of the 79th edition of the annual Christmas swimming “Coupe de Noel” jump into the Lake Geneva, in Geneva, Switzerland, Sunday, December 17, 2017. More than 2000 men and women swam the 120 meters at the traditional Christmas swimming in Geneva where the water temperature was 6 degrees. (Photo by Martial Trezzini/EPA/EFE/Rex Features/Shutterstock) 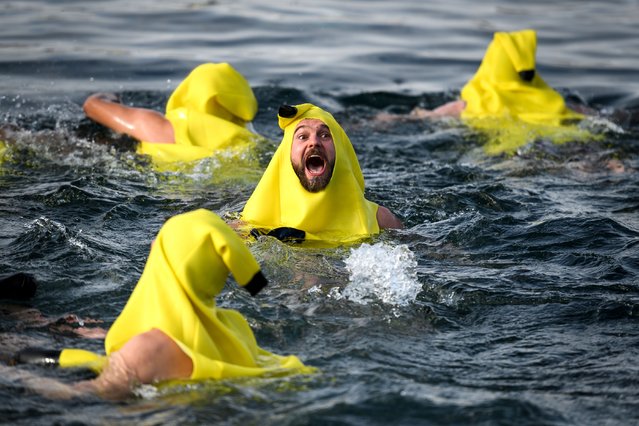