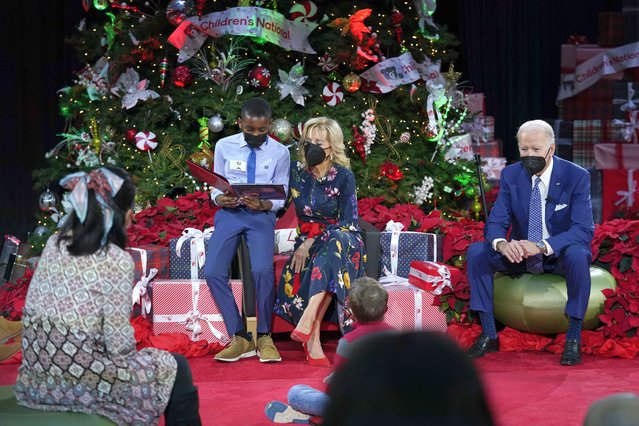 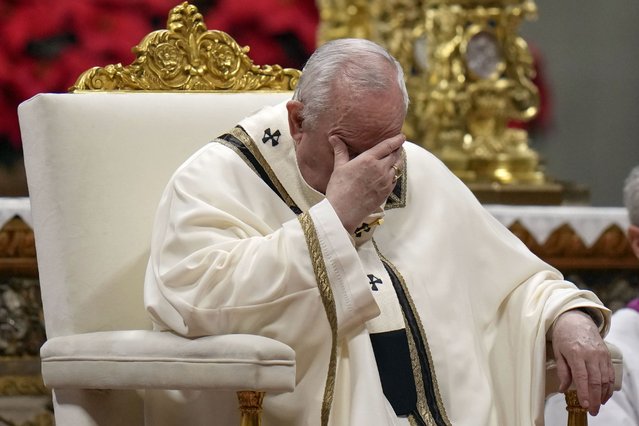 Pope Francis holds his head as he celebrates Christmas Eve Mass, at St. Peter's Basilica, at the Vatican, Friday December 24, 2021. Pope Francis celebrated Christmas Eve Mass before an estimated 1,500 people in St. Peter's Basilica on Friday, going ahead with the service despite the resurgence in COVID-19 cases that has prompted a new vaccine mandate for the Vatican City State. (Photo by Alessandra Tarantino/AP Photo) 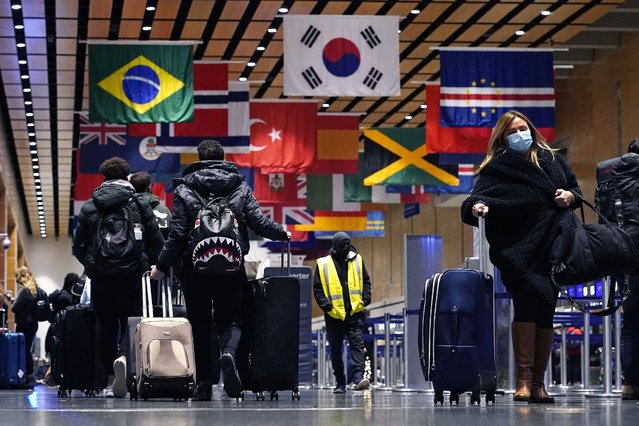 Travelers trek through Terminal E at Logan Airport, Tuesday, December 21, 2021, in Boston. At least three major airlines say they have canceled dozens of flights, Friday, Dec. 24, because illnesses largely tied to the omicron variant of COVID-19 have taken a toll on flight crew numbers during the busy holiday travel season. (Photo by Charles Krupa/AP Photo) 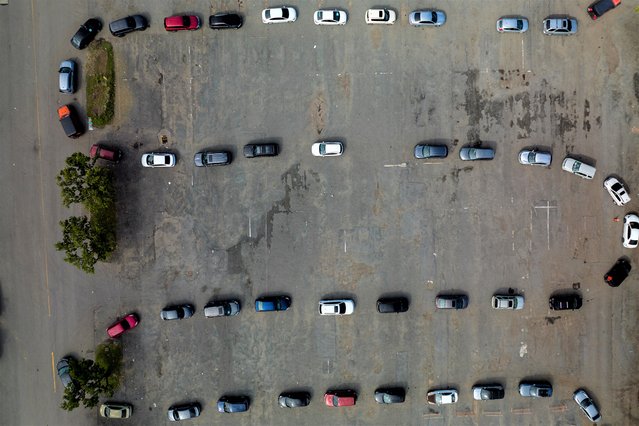 An aerial view of people queuing for a drive-in coronavirus disease (COVID-19) testing site, as the latest Omicron variant emerges as a threat, at Hiram Bithorn Stadium's parking lot in San Juan, Puerto Rico on December 23, 2021. (Photo by Ricardo Arduengo/Reuters) 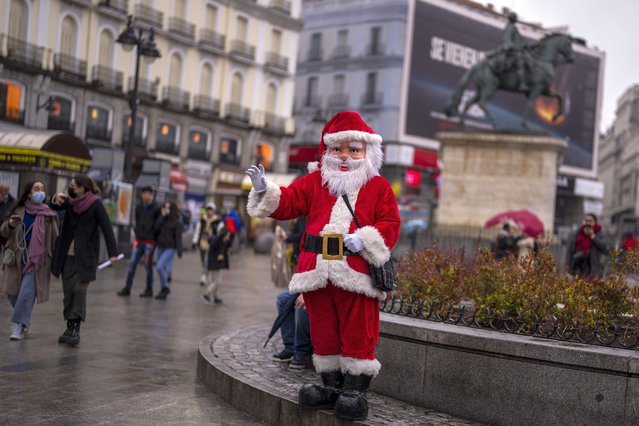 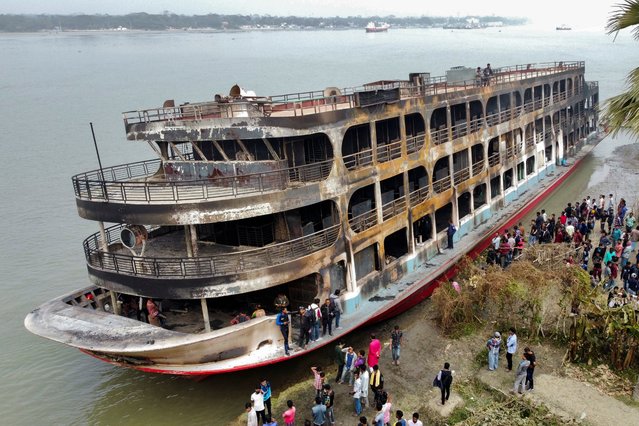 The burnt passenger ferry is seen anchored on the bank of Sugandha River which caught on a fire that killed several dozens in Jhalalathi, Bangladesh, December 24, 2021. (Photo by Reuters/Stringer) 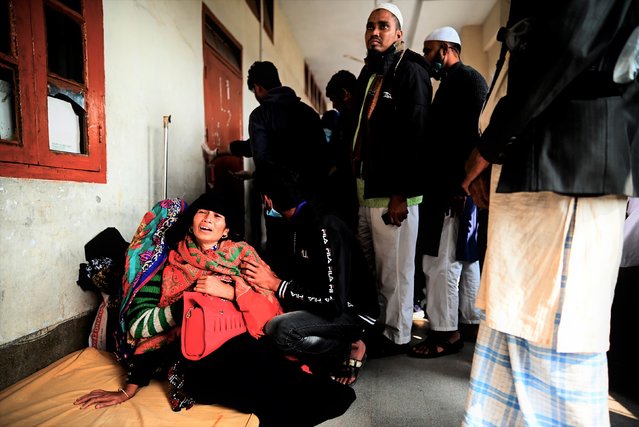 A relative of a ferry fire victim wails at a government medical hospital, in Barishal, Bangladesh, Friday, December 24, 2021. Bangladesh fire services say at least 37 passengers have been killed and many others injured in a massive fire that swept through a ferry on the southern Sugandha River. The blaze broke out around 3 a.m. Friday on the ferry packed with 800 passengers. (Photo by Niamul Rifat/AP Photo) 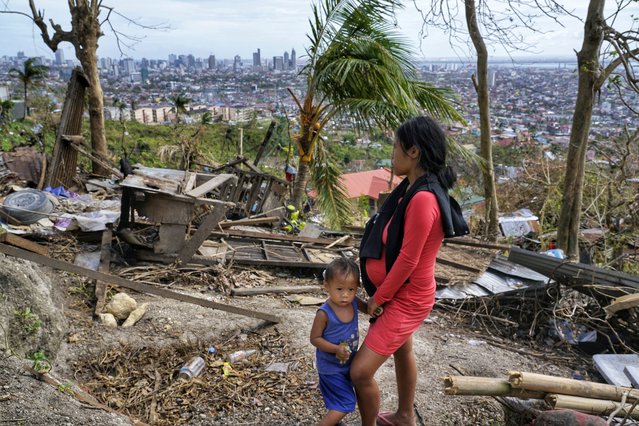 Alona Nacua, right, stands beside her son as she looks at their damaged house due to Typhoon Rai in Cebu city, central Philippines on Christmas Day, Saturday, December 25, 2021. Nacua said she and her husband managed to receive rice and four small cans of sardines and corned beef so they could feed their family Saturday. “It's the saddest Christmas for me, seeing my children suffer this way on this day”, added Nacua, who is pregnant with her fourth child. (Photo by Jay Labra/AP Photo) 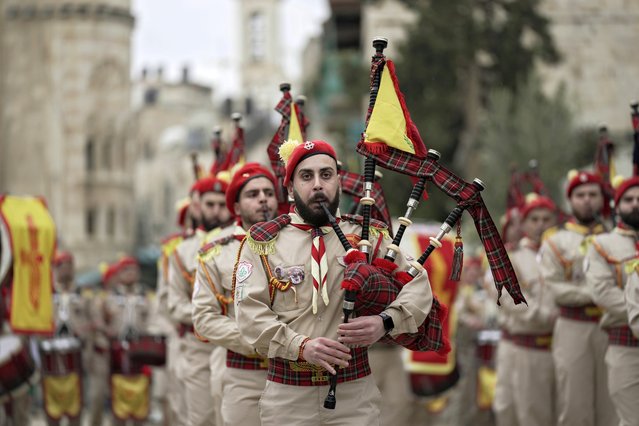 Palestinian scout band members parade through Manger Square at the Church of the Nativity, traditionally believed to be the birthplace of Jesus Christ, during Christmas celebrations, in the West Bank city of Bethlehem, Friday, December 24, 2021. The biblical town of Bethlehem is gearing up for its second straight Christmas Eve hit by the coronavirus with small crowds and gray, gloomy weather dampening celebrations Friday in the traditional birthplace of Jesus. (Photo by Majdi Mohammed/AP Photo) 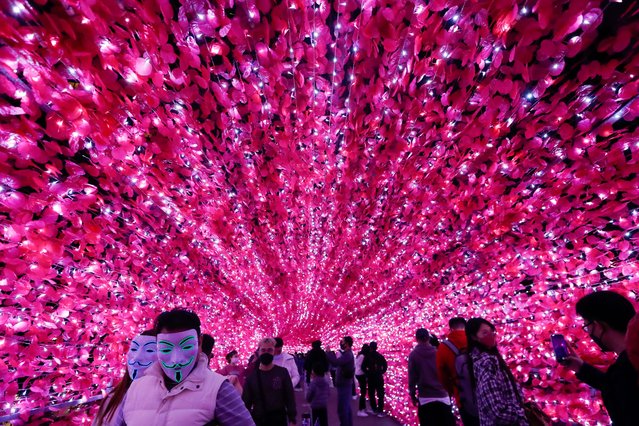 People walk and take photos on a footbridge with Christmas lights decoration in New Taipei on December 24, 2021, amid global concerns of the spread of Omicron. Many countries like the US, Italy, France, Germany, UK have reimposed virus restrictions such as mask wearing and cancellation of big events ahead of Christmas Day, as the number of Omicron virus has been growing. (Photo by Daniel Ceng Shou-Yi/ZUMA Press Wire/Rex Features/Shutterstock) 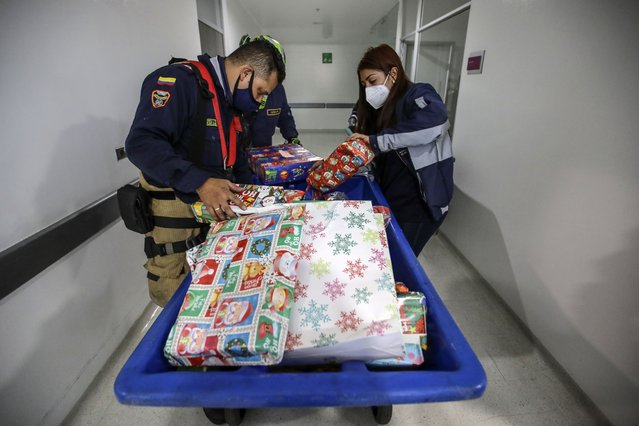 Members of the Bogota's fire department are dressed up as Santa Claus to bring Christmas presents to the kids who will spend Christmas at La Misericordia Pediatric Hospital in Bogota, Colombia on December 24, 2021. (Photo by Juancho Torres/Anadolu Agency via Getty Images) 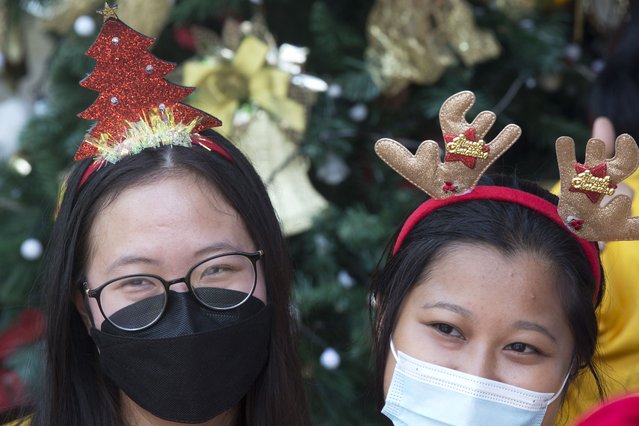 Women wearing masks to curb the spread of the coronavirus work on decorations to celebrate Christmas at a church in Bali, Indonesia on Friday, December 24, 2021. (Photo by Firdia Lisnawati/AP Photo) 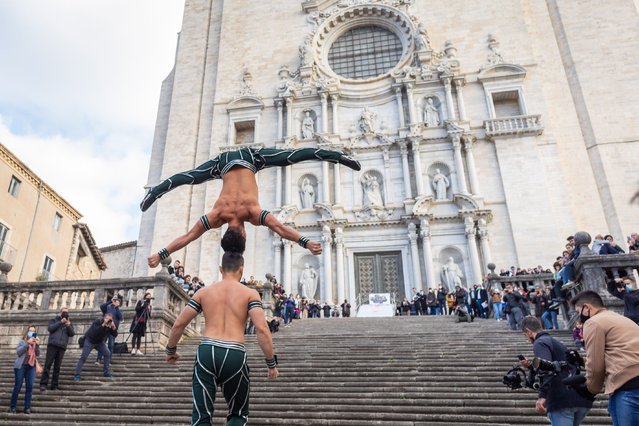 Two Vietnamese acrobats, known as “Giang Brothers”, smashed the World Record for the 'Most consecutive stairs climbed while balancing a person on the head' at Girona's Cathedral, in Girona, Catalonia, northeastern Spain, 23 December 2021. The performers set the new record with 52 seconds. (Photo by David Borrat/EPA/EFE) 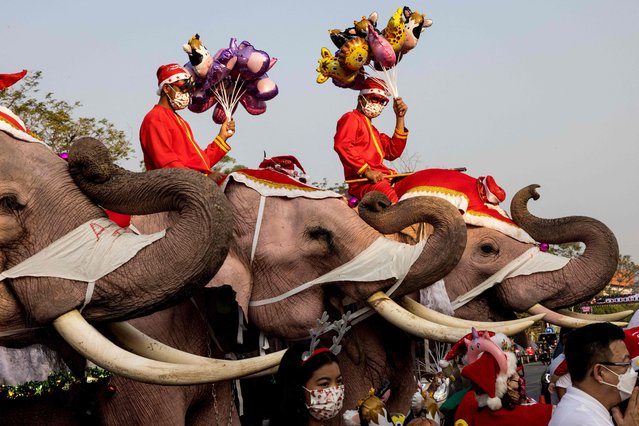 Mahouts and their elephants pose for children during Christmas celebrations at the Jirasart Witthaya school in Ayutthaya on December 24, 2021. (Photo by Jack Taylor/AFP Photo) 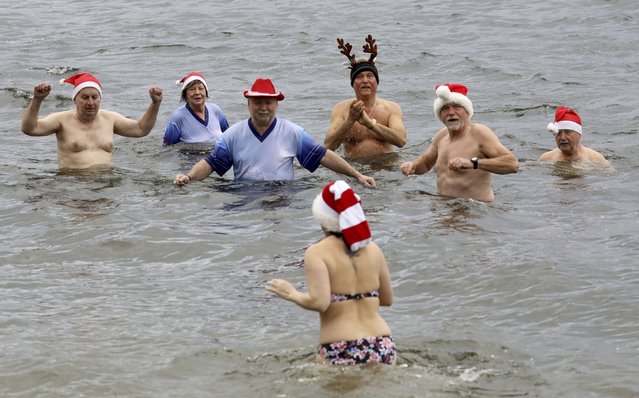 Members of the winter swimming club “Pirrlliepausen” go into Lake Senftenberg, which is four degrees cold (39 Farenheit) for their traditional Christmas swim, in Seftenberg, Germany, Friday, December 24, 2021.. Since 1987, the “Pirrlliepausen” have been going into the water twice a week in winter. “Pirrlliepausen” is an old North German expression for “icicles”. (Photo by Bernd W'stneck/dpa via AP Photo) 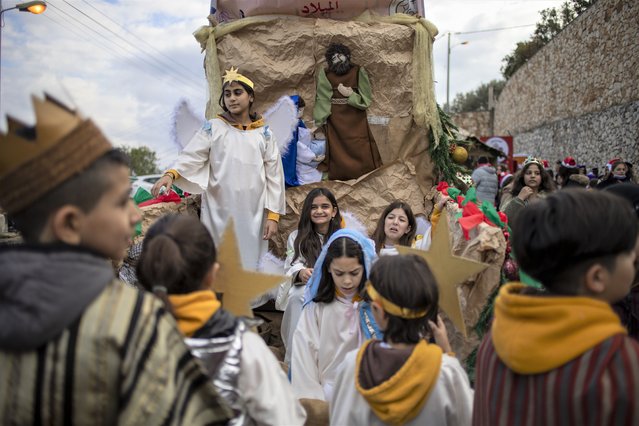 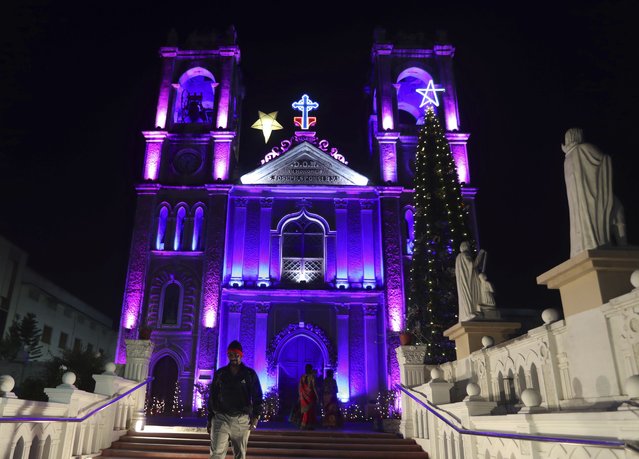 People walk past an illuminated St. Joseph Cathedral on the eve of the Christmas, in Hyderabad, India, Friday, December 24, 2021. (Photo by Mahesh Kumar A./AP Photo) 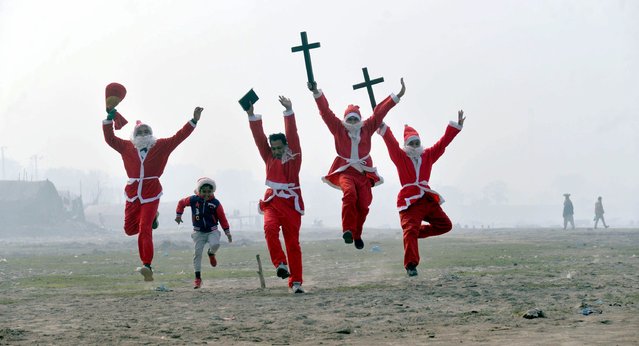 Pakistani members of Bright Future Society and IMRF wearing costumes of Santa Claus boating at river Ravi and distributing sweets among gypsy children's ahead of Christmas celebrations in Lahore on December 24, 2021. Christian community across the country has started preparing to celebrate the festive season of “Christmas” with the advent of December. The Christians have started illuminating their homes and churches while Christmas shopping is in full swing all over the country. (Photo by Rana Sajid Hussain/Pacific Press/Rex Features/Shutterstock) 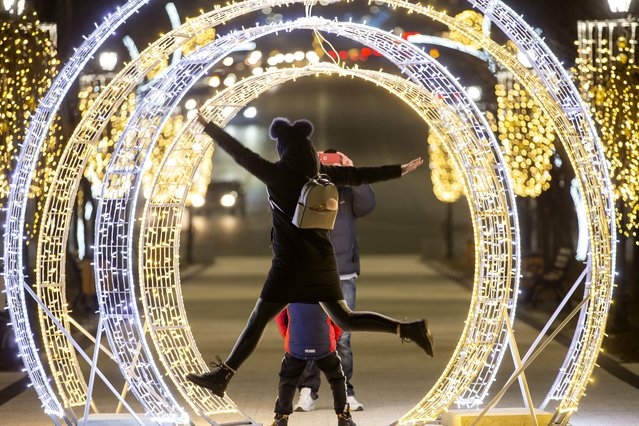