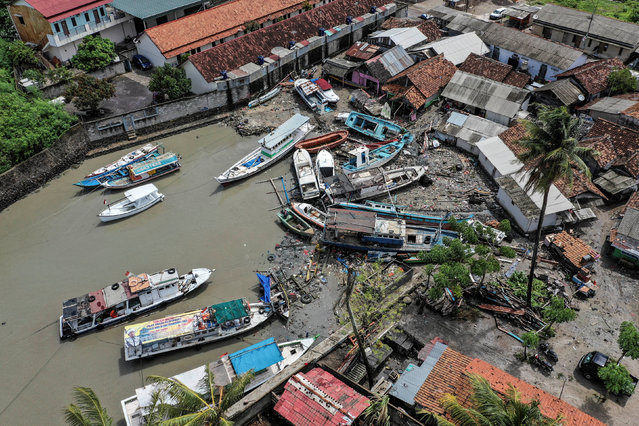 Stranded boats are seen near houses after a tsunami hit at Anyer in Banten, Indonesia, December 24, 2018 in this photo taken by Antara Foto. (Photo by Muhammad Adimaja/Antara Foto via Reuters) 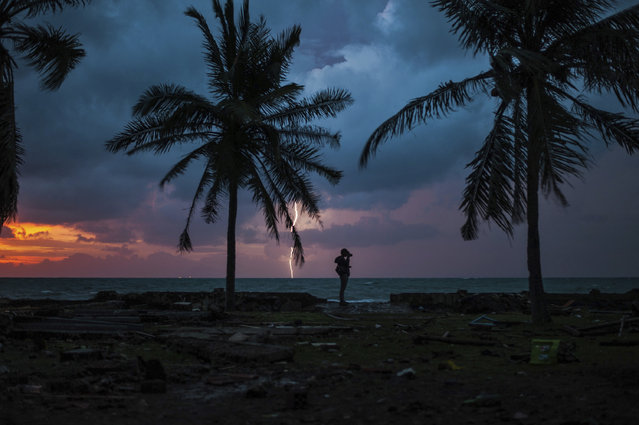 A photojournalist is silhouetted by the sunset as a lightning strike at a resort affected by Saturday's tsunami in Carita, Indonesia, Tuesday, December 25, 2018. Christmas celebrations traditionally filled with laughter and uplifting music were replaced by somber prayers for tsunami victims in an area hit without warning following a volcanic eruption, leaving hundreds of people dead and thousands homeless in disaster-prone Indonesia. (Photo by Fauzy Chaniago/AP Photo) 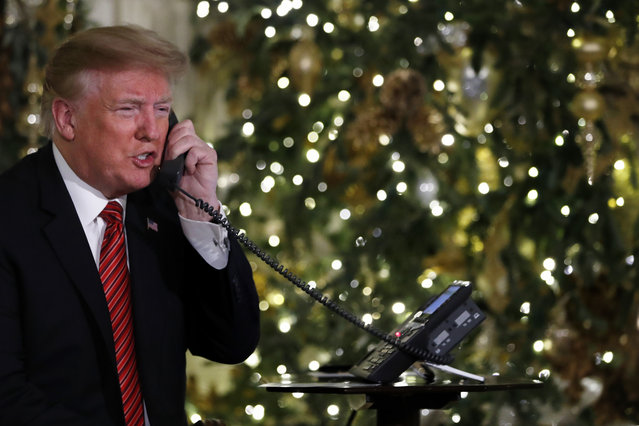 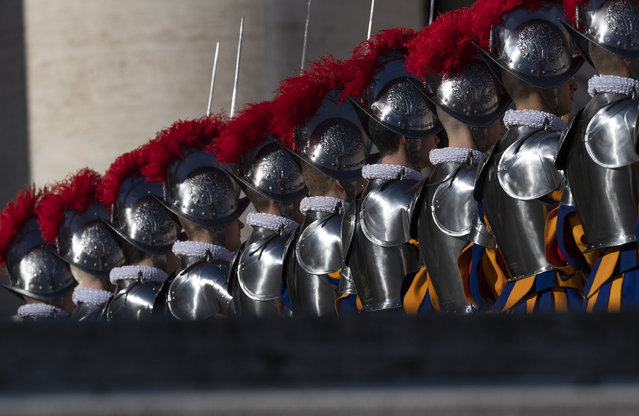 Swiss guards parade before the arrival of the Pope for the traditional “Urbi et Orbi” Christmas message to the city and the world, on December 25, 2018, at Saint Peter's square in the Vatican. (Photo by Tiziana Fabi/AFP Photo) 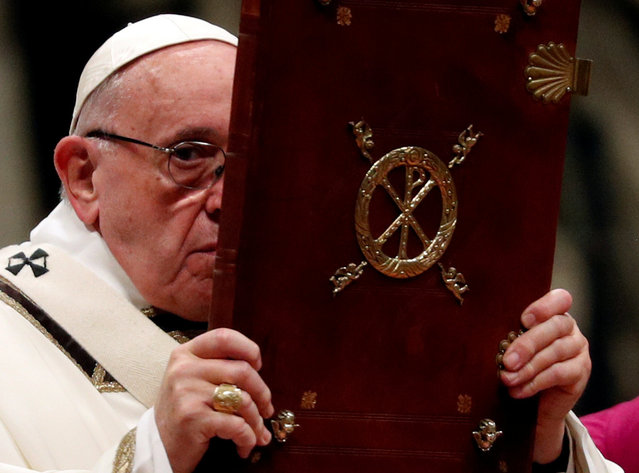 Pope Francis holds the Book of the Gospels as he leads the Christmas Eve mass in Saint Peter's Basilica at the Vatican, December 24, 2018. (Photo by Max Rossi/Reuters) 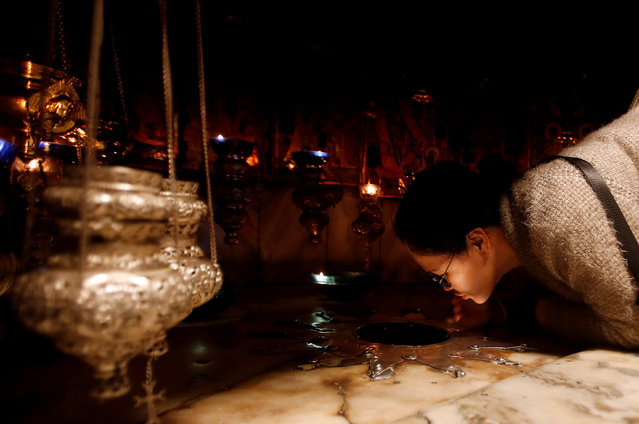 A worshipper kisses the star inside the cave at the Church of the Nativity, in Bethlehem in the Israeli-occupied West Bank December 23, 2018. (Photo by Mussa Qawasma/Reuters) 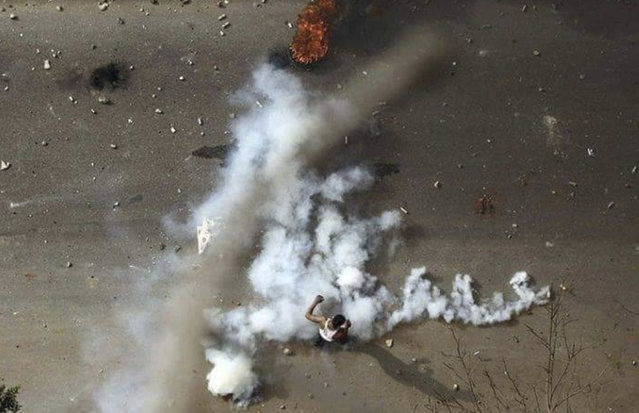 In this Friday, December 21, 2018 handout photo provided a Sudanese activist, a protester stands in tear gas during clashes with security forces in Khartoum, Sudan. The protest was one in a series of anti-government protests across Sudan, initially sparked by rising prices and shortages. (Photo by Sudanese Activist via AP Photo) 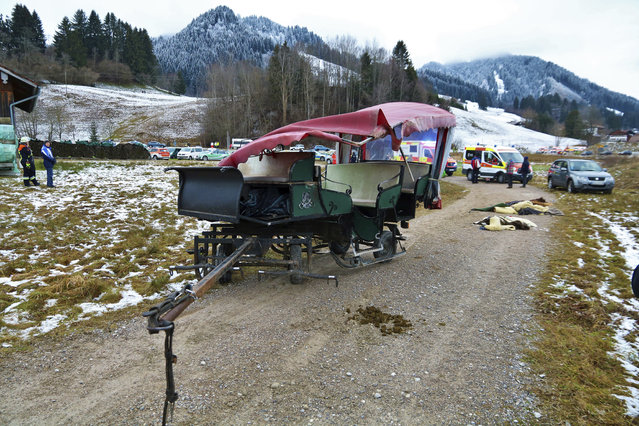 A damaged carriage sits on a path near Pfronten, southern Germany, Tuesday, December 25, 2018. 20 people were injured, two of them seriously, when two horse-drawn carriages collided during a Christmas day outing. The two carriages, each with 10 passengers, were approaching a rail crossing single file when the first carriage halted. The second did not and overturned during the collision. (Photo by Benjamin Liss/DPA via AP Photo) 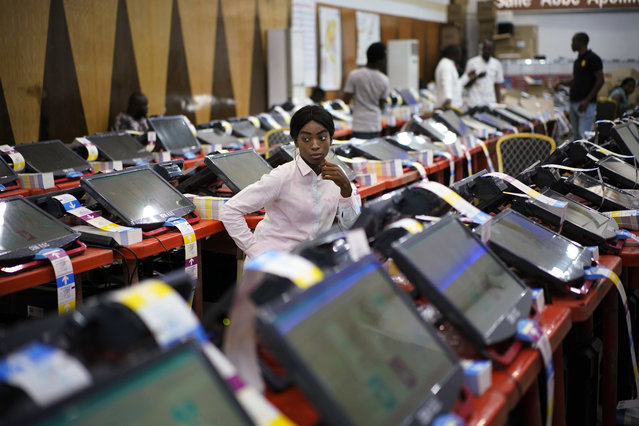 In this photograph taken Sunday December 23, 2018, CENI agents monitor the printing of ballots at the electoral commission's headquarters in Kinshasa, Congo. As Congo hurtles toward an already troubled election on Sunday, Dec. 30 the opposition is urging mobile phone companies to disable SIM cards provided for voting machines. Concerns are growing about how the ballots of some 40 million people will be counted and shared. Some worry that electronic transmission of results by the machines could open the door to manipulation. (Photo by Jerome Delay/AP Photo) 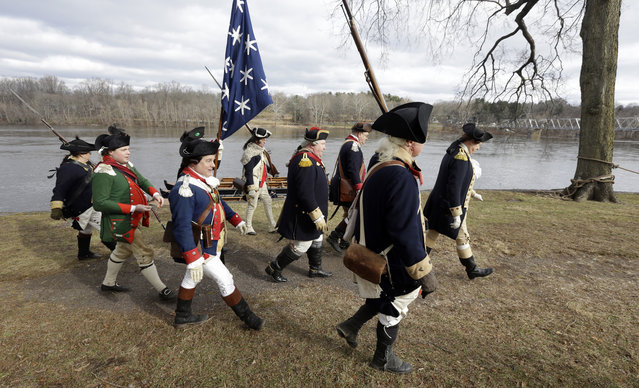 Re-enactor John Godzieba, right, portrays Gen. George Washington as he leads others along the banks of the Delaware River, Tuesday December 25, 2018 in Washington Crossing, Pa. The annual reenactment of George Washington's daring 1776 crossing of the Delaware River on Christmas Day has once again been left high and dry as organizers announced Monday that the river crossing portion of the reenactment will not take place due to high river conditions following recent rainfall. Other activities carried on as scheduled. (Photo by Jacqueline Larma/AP Photo) 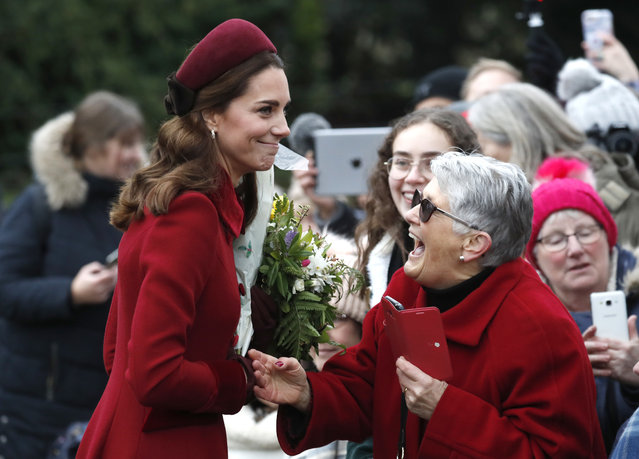 Britain's Kate, Duchess of Cambridge smiles as she meets members of the crowd after attending the Christmas day service at St Mary Magdalene Church in Sandringham in Norfolk, England, Tuesday, December 25, 2018. (Photo by Frank Augstein/AP Photo) 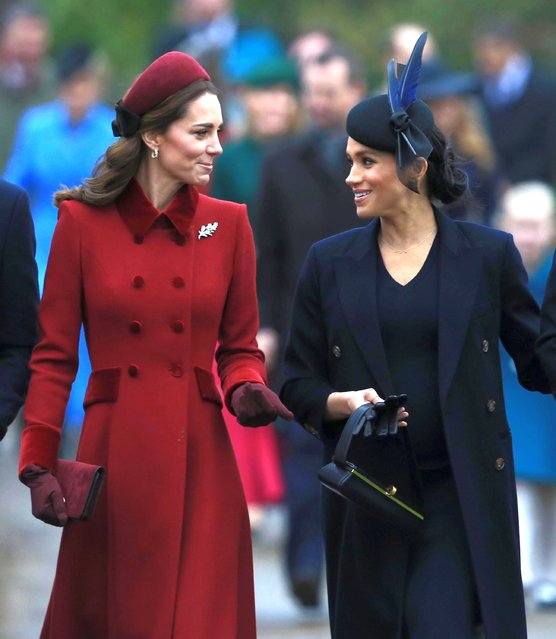 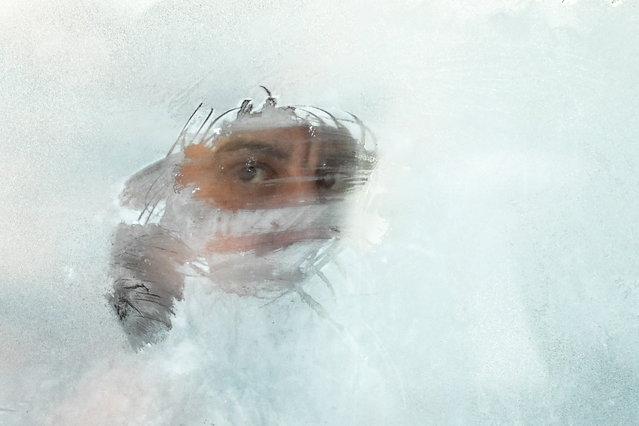 A passenger on a bus as frost hits Novosibirsk, Russia the mercury dropping as low as –31°C on December 24, 2018. (Photo by Kirill Kukhmar/TASS) 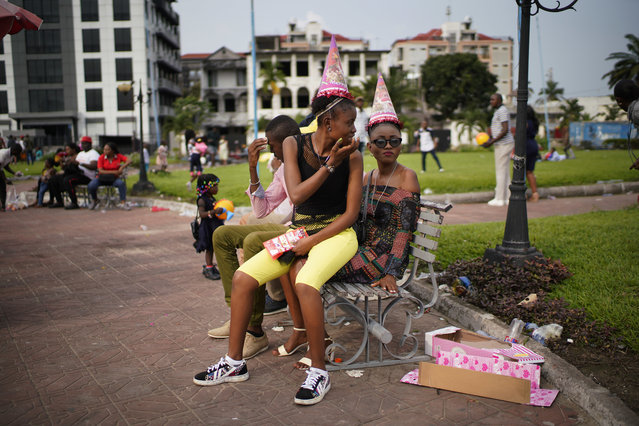 Congolese youth sit on a park bench in Kinshasa, Congo, Tuesday December 25, 2018. Traditionally Congolese dress up and take to the parks on Christmas day, this time five days before scheduled presidential and general elections. (Photo by Jerome Delay/AP Photo) 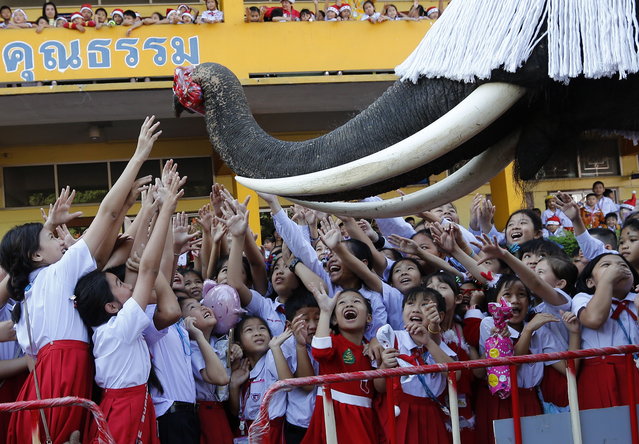 A Thai elephant dressed as Santa Claus distributes presents to students during Christmas celebrations at a school in the world heritage city of Ayutthaya, north of Bangkok, Thailand, 24 December 2018. The annual event is held every year for to celebrate the upcoming Christmas festive season and promote tourism in Ayutthaya. (Photo by Narong Sangnak/EPA/EFE) 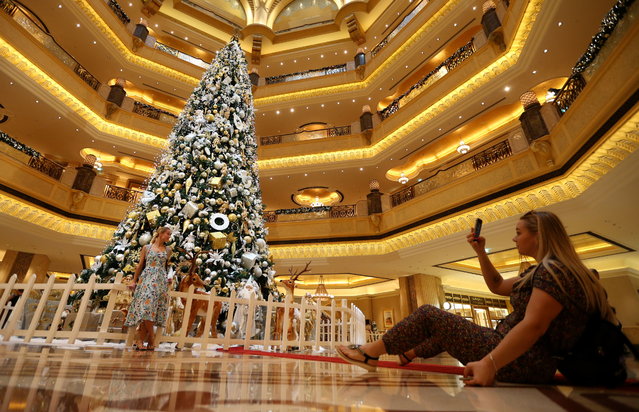 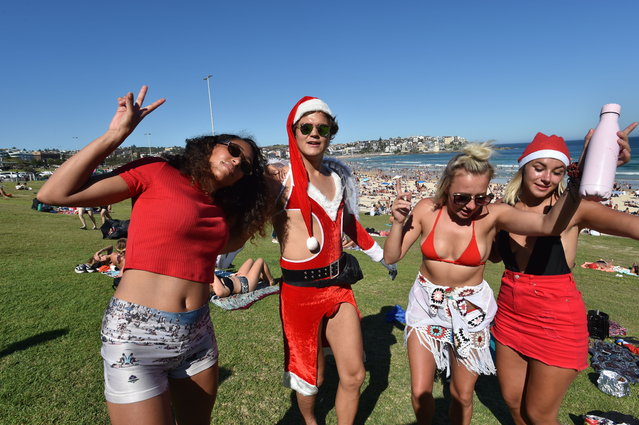 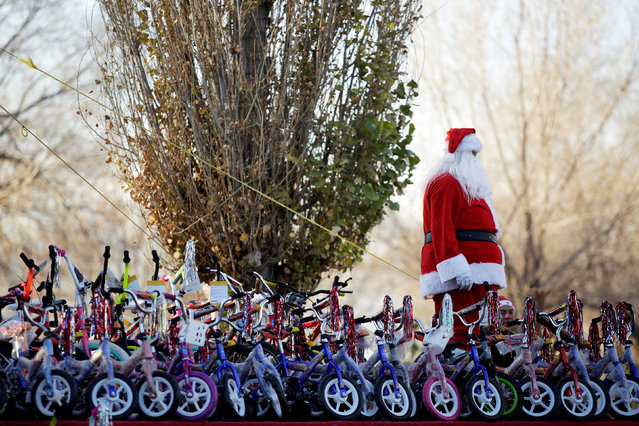 A firefighter dressed as Santa Claus stands by bicycles during the annual gift-giving event organised by the Fire Department, in which they hand out items donated throughout the year to children in need, in Ciudad Juarez, Mexico, December 24, 2018. (Photo by Jose Luis Gonzalez/Reuters) 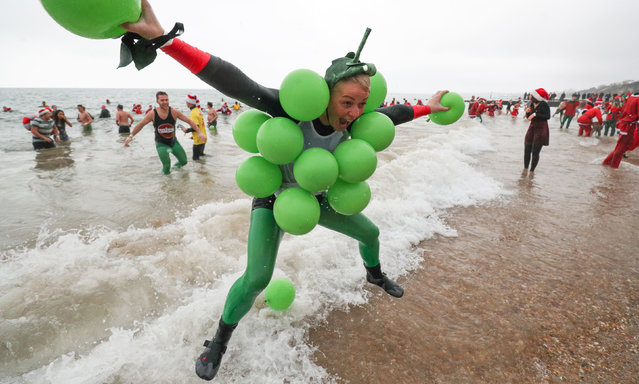