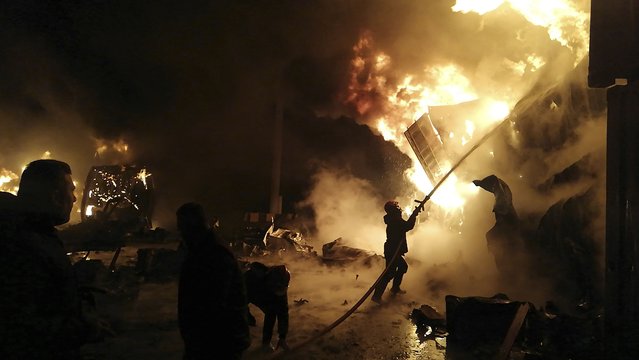 In this photo released by the Syrian official news agency SANA, firefighters work at the scene of missiles attack, at the seaport of the coastal city of Latakia, Syria, Tuesday, December 28, 2021. Israeli missiles fired from the Mediterranean struck the Syrian port of Latakia early Tuesday, igniting a fire in the container terminal, Syrian state media reported, in the second such attack on the vital facility this month. (Photo by SANA via AP Photo) 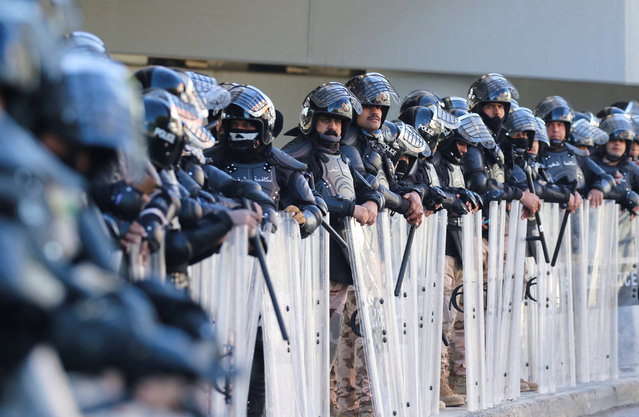 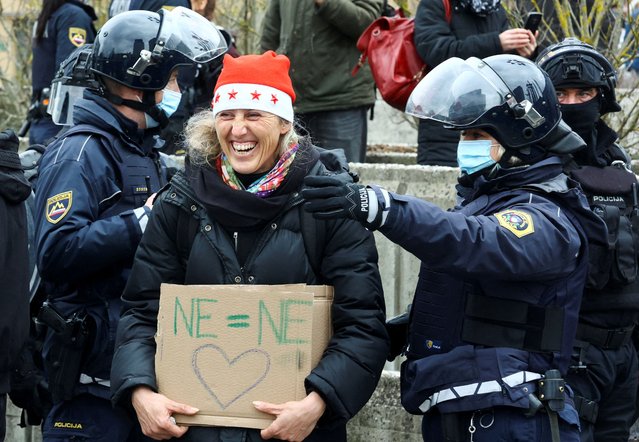 A woman reacts during a protest over coronavirus disease (COVID-19) restrictions, in Ljubljana, Slovenia, December 27, 2021. (Photo by Borut Zivulovic/Reuters) 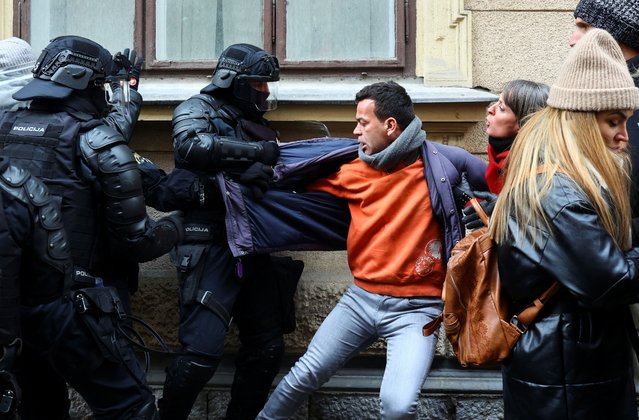 A protester scuffles with police officers during a protest over coronavirus disease (COVID-19) restrictions, in Ljubljana, Slovenia, December 27, 2021. (Photo by Borut Zivulovic/Reuters) 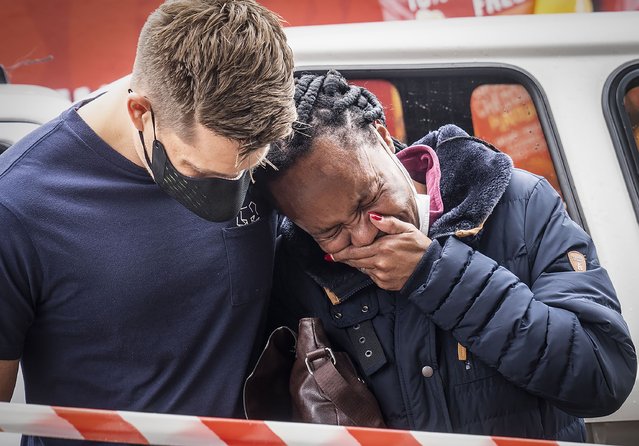 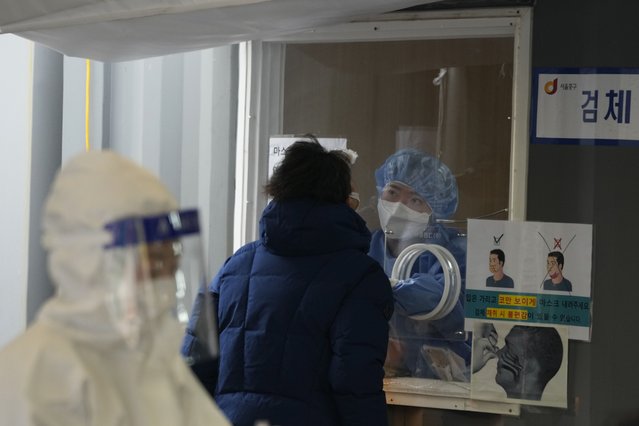 A medial worker in a booth takes a nasal sample from a man at a makeshift testing site in Seoul, South Korea, Monday, December 27, 2021. (Photo by Ahn Young-joon/AP Photo) 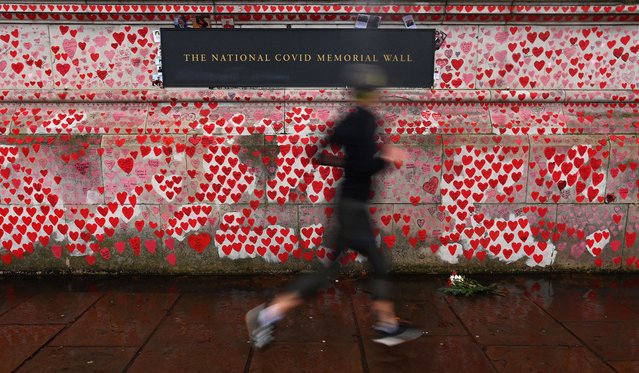 A jogger runs past the Covid-19 Memorial Wall in London, Britain, 27 December 2021. The UK government is expected to announce if further Covid restrictions will be required to curb the spread of the Omicron variant. British Prime Minister Boris Johnson is to receive new data from scientists. Pubs and restaurants are most at risk if further restrictions are implemented. (Photo by Andy Rain/EPA/EFE) 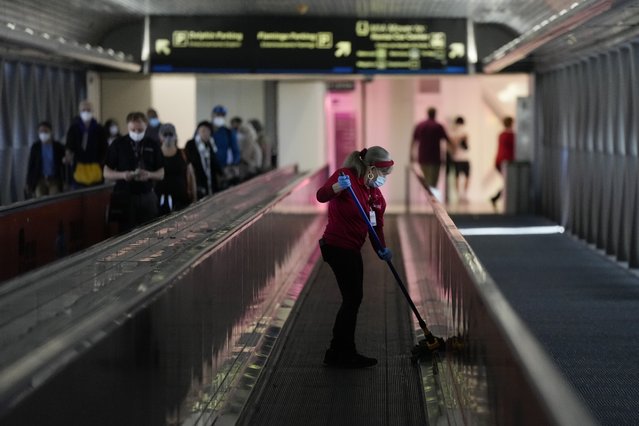 An airport employee cleans the sides of a moving walkway at Miami International Airport, Monday, December 27, 2021, in Miami. Thousands of flights worldwide were canceled or delayed on Monday, as airline staffing shortages due to the rapid spread of the omicron variant of COVID-19 continued to disrupt the busy holiday travel season. (Photo by Rebecca Blackwell/AP Photo) 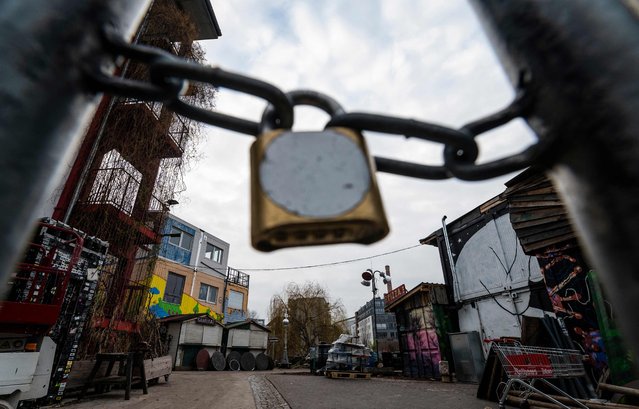 A locked gate blocks access to the Holzmarkt 25 bar area on the banks of the river Spree, close to the Kater Blau club on December 27, 2021. In response to the growing occurence of the Covid-19 Omicron variant in Germany, the federal government has put a lid on New Year celebrations, with discotheques slated to close from December 28, 2021 onwards. (Photo by John MacDougall/AFP Photo) 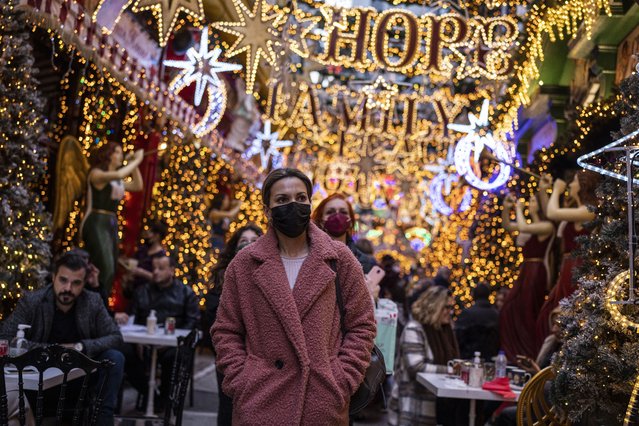 People wearing protective face masks walk outside a Christmas decorated coffee shop in Psiri district of Athens, on Monday, December 27, 2021. Part of new restrictions includes a mask mandate for outdoors and all public areas as the Greek government is expected to announce new measures to contain the spread of the Omicron variant. (Photo by Petros Giannakouris/AP Photo) 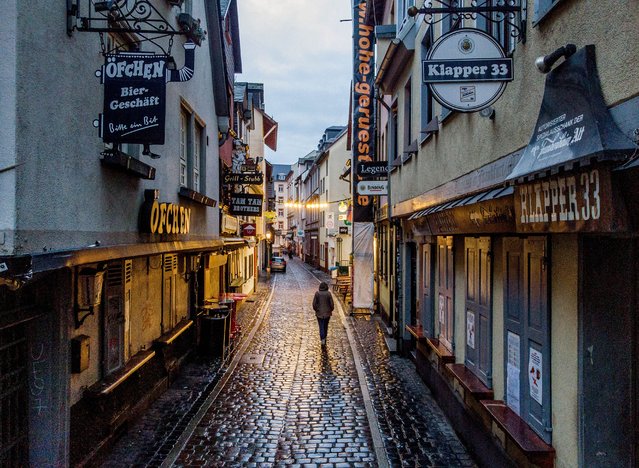 A woman walks between closed bars and restaurants in Frankfurt, Germany, Monday, December 27, 2021. New restrictions to avoid the outspread of the coronavirus will go into effect from Tuesday on all over Germany. (Photo by Michael Probst/AP Photo) 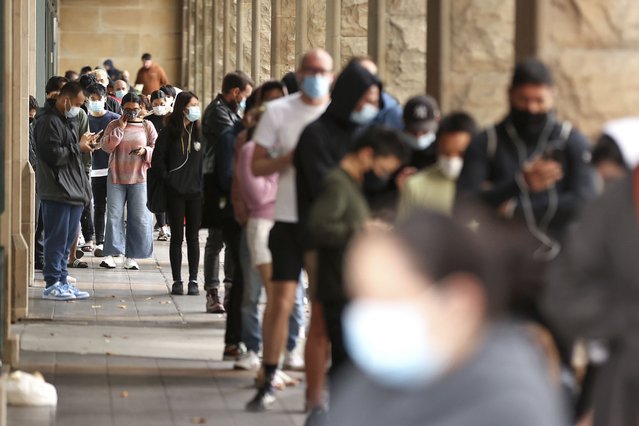 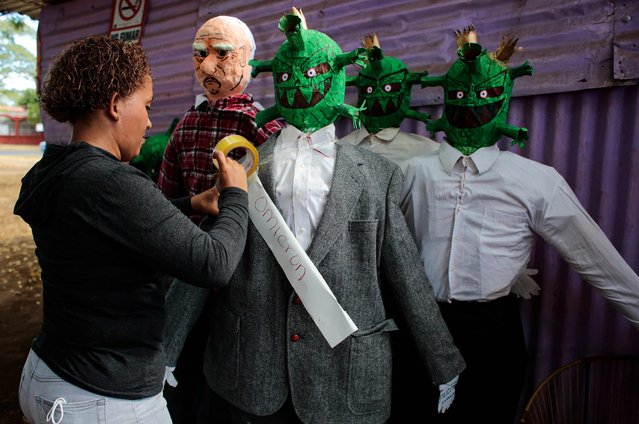 A woman tapes the word “Omicron” to a handmade doll depicting Covid-19 Omicron variant in Managua, on December 27, 2021. The dolls are burned at midnight on December 31 as a tradition of saying goodbye to the old year and welcoming the new. (Photo by Oswaldo Rivas/AFP Photo) 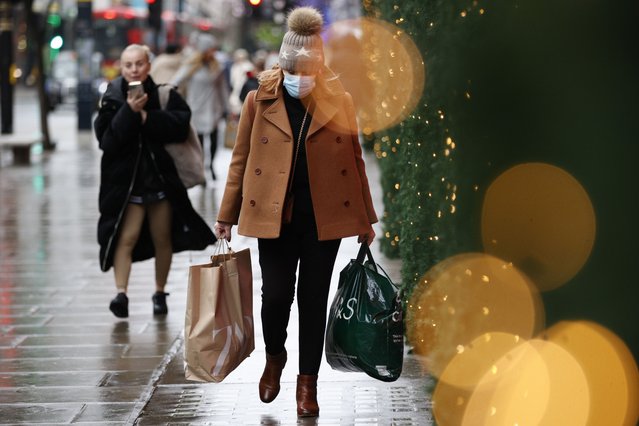 A woman wearing a face mask to guard against COVID-19 carries bags of shopping along Oxford Street in London, Monday, December 27, 2021. In Britain, where the omicron variant has been dominant for days, government requirements have been largely voluntary and milder than those on the continent, but the Conservative government said it could impose new restrictions after Christmas. (Photo by David Cliff/AP Photo) 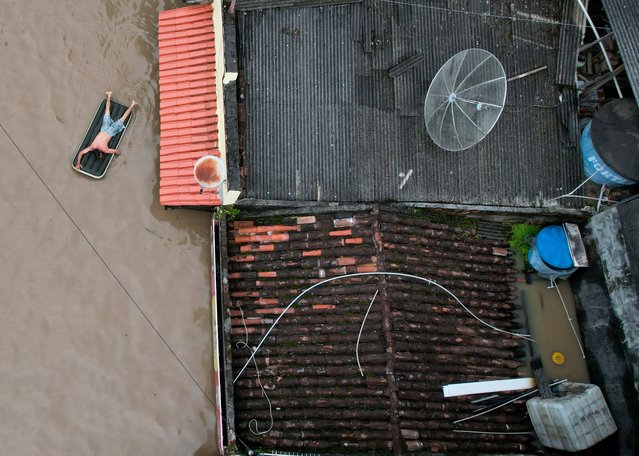 A man uses an inflatable mattress during flooding caused by the overflowing Cachoeira river in Itabuna, Bahia state, Brazil, December 26, 2021. Picture taken with a drone. (Photo by Leonardo Benassatto/Reuters) 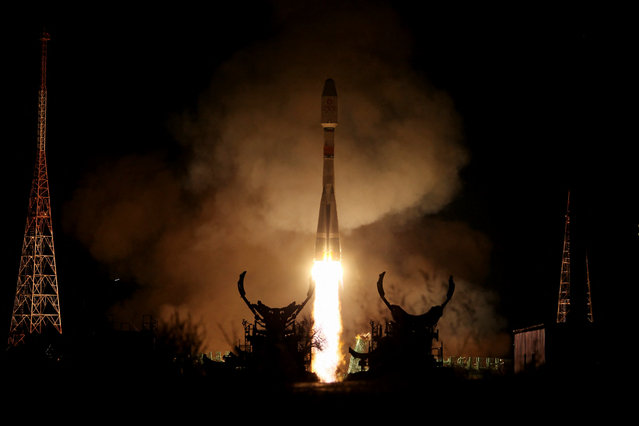 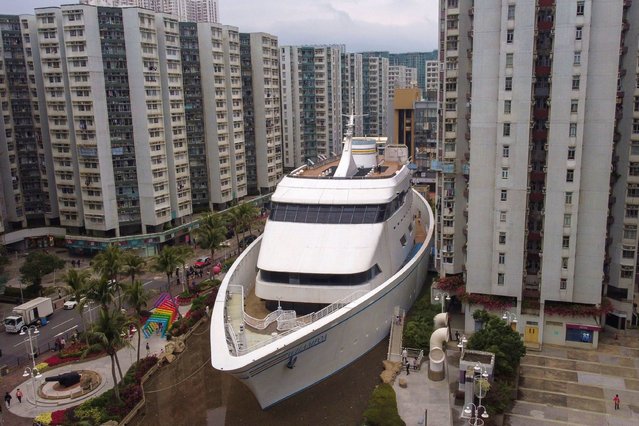 An aerial view shows a shopping mall shaped like a ship amid residential buildings in Hong Kong on December 27, 2021. (Photo by Peter Parks/AFP Photo) 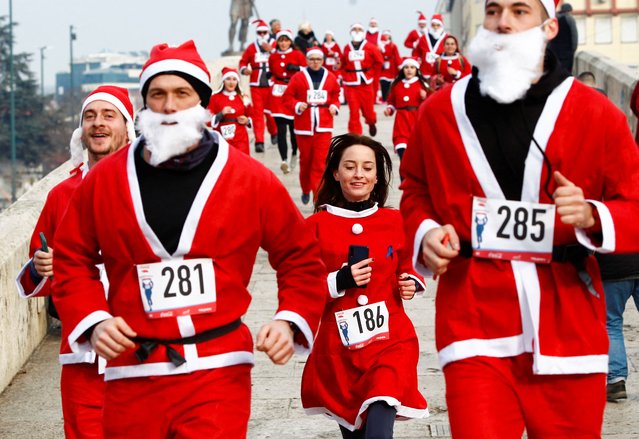 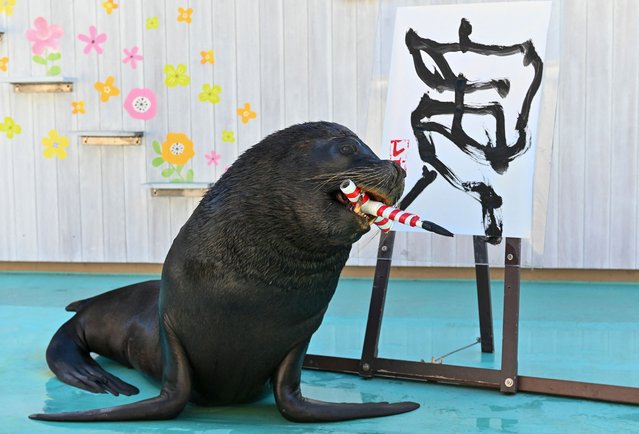 Sea lion Leo poses after writing the Chinese character for “tiger”, which is the upcoming new year's Chinese zodiac sign, during a press preview at Hakkeijima Sea Paradise in Yokohama on December 27, 2021. (Photo by Kazuhiro Nogi/AFP Photo) 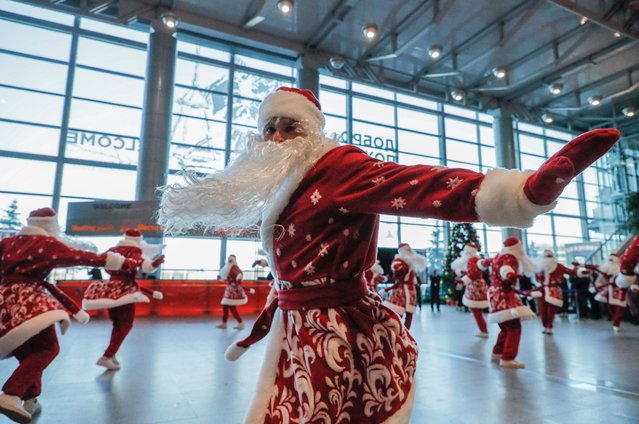 Actors dressed as Father Frost perform in the main building of the Domodedovo airport named after Mikhail Lomonosov in Moscow, Russia, 27 December 2021. Russians are preparing to celebrate New Year's Eve on 31 December and Christmas which is observed on 07 January, according to the Russian Orthodox Julian calendar, 13 days after Christmas on 25 December on the Gregorian calendar. (Photo by Sergei Ilnitsky/EPA/EFE)
Edit Del
28 Dec 2021 09:03:00, post received 0 comments
Publication archive:
←   →
Popular tags:
All tags
Last searches: