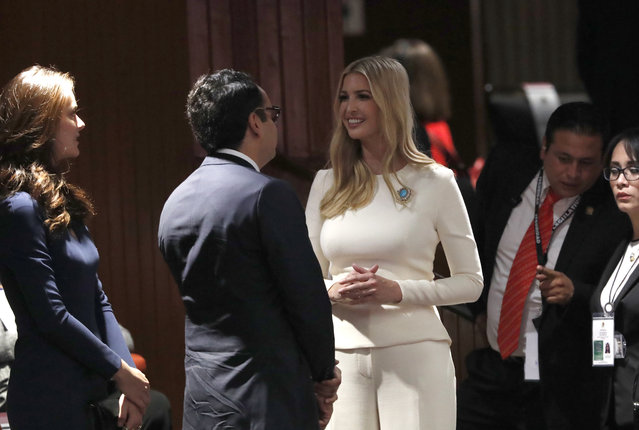 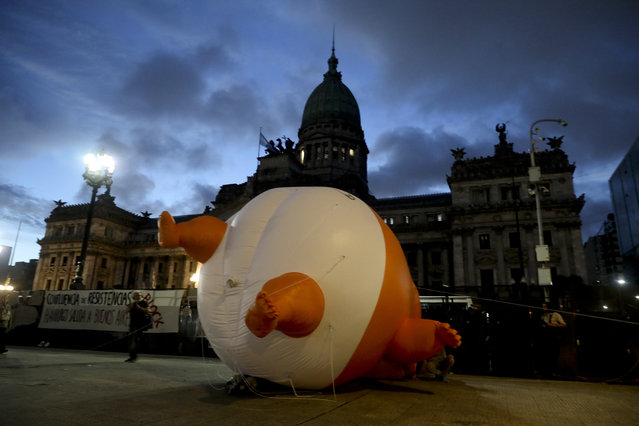 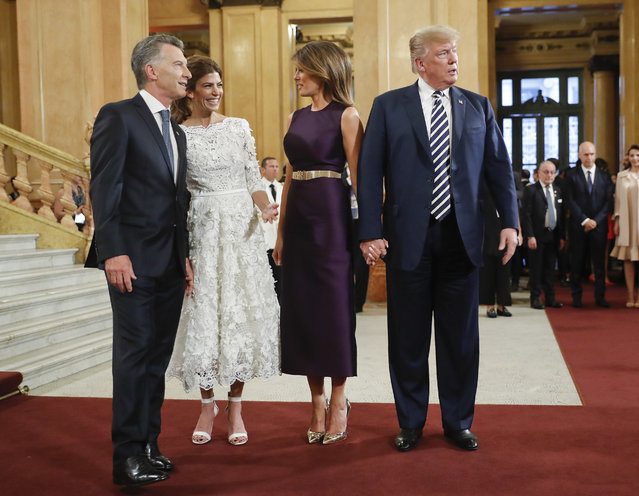 President Donald Trump and first lady Melania Trump talk with Argentina's President Mauricio Macri and his wife Juliana Awada as they arrive at the Teatro Colon to join other heads of state for the G20 leaders dinner, Friday, November 30, 2018 in Buenos Aires, Argentina. (Photo by Pablo Martinez Monsivais/AP Photo) 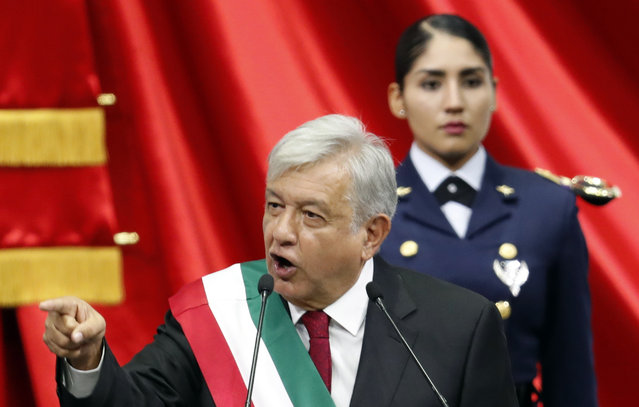 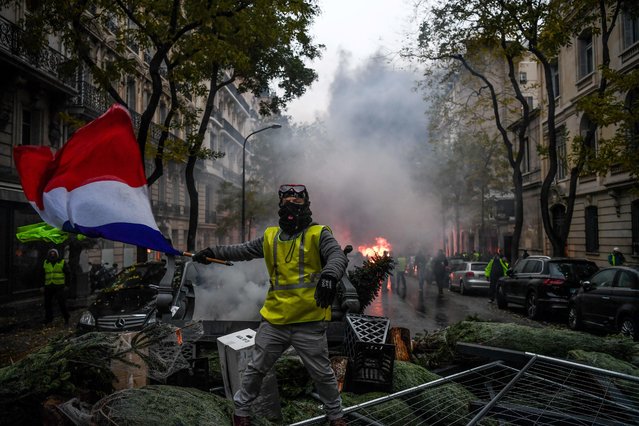 A demonstrator holds a french flag among christmas trees during a protest of Yellow vests (Gilets jaunes) against rising oil prices and living costs, on December 1, 2018 in Paris. Speaking at the Paris police's command centre, French Prime Minister said 36,000 people were protesting across France, including 5,500 in the capital for this 3rd nationwide day of blockade ands demos. (Photo by Alain Jocard/AFP Photo) 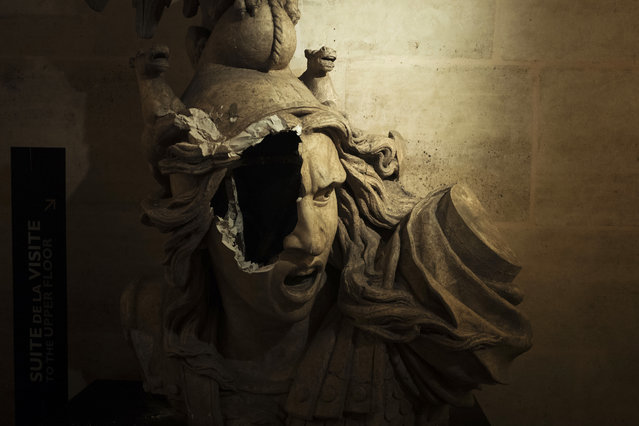 A broken sculpture of Marianne, symbol of the French Repupblic, appears damaged in the gallery inside the Arc de Triomphe during a demonstration Saturday, December 1, 2018 in Paris. A French protest against rising taxes and the high cost of living turned into a riot Saturday in Paris as police fired tear gas and water cannon in street battles with activists wearing the fluorescent yellow vests of a new movement. (Photo by Kamil Zihnioglu/AP Photo) 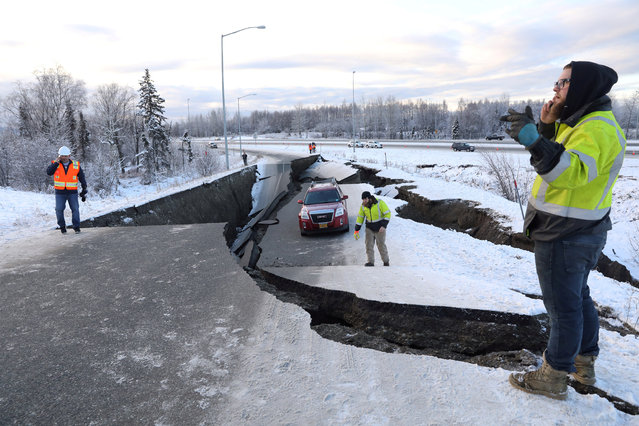 A stranded vehicle lies on a collapsed roadway near the airport after an earthquake in Anchorage, Alaska, U.S. November 30, 2018. (Photo by Nathaniel Wilder/Reuters) 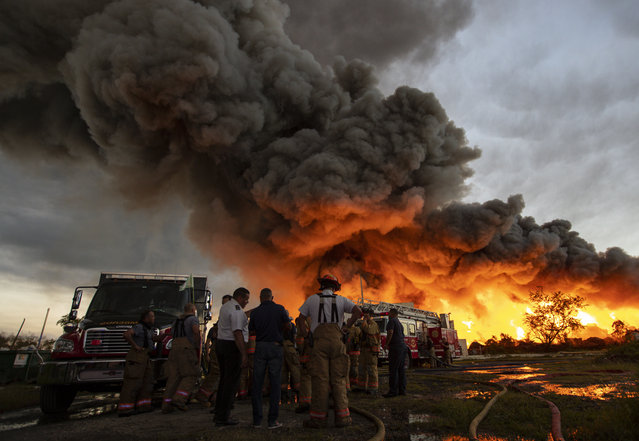 Emergency services personnel at the scene of a fire at a recycling plant near Carolina, Puerto Rico on November 27, 2018. (Photo by El Nuevo Dias/Rex Features/Shutterstock) 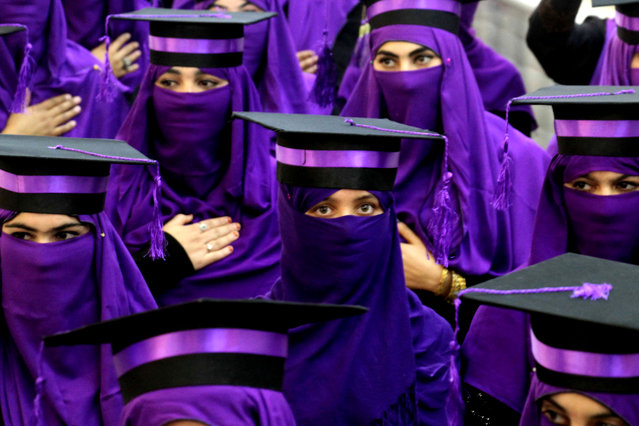 Afghan students attend their graduation ceremony in Kandahar, Afghanistan, 29 November 2018. Around 400 students graduated in the field of Nursing, Pharmacy and Medical laboratory at Kandahar Mamon Tahiri institute, in Kandahar. (Photo by Muhammad Sadiq/EPA/EFE) 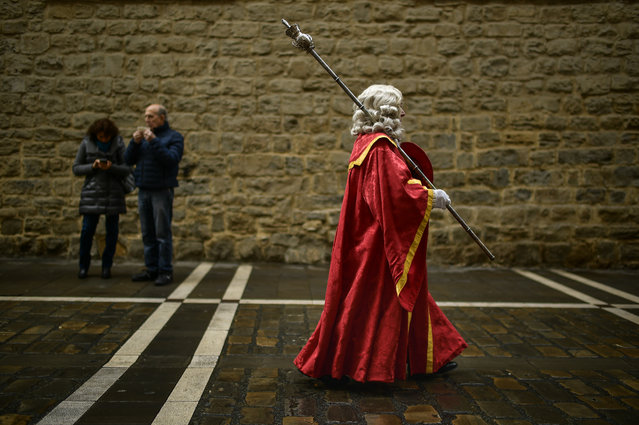 A man dressed in ancient regional costume walks along a street of the old city while taking part in a procession in honor of Saint Saturnino, in Pamplona, northern Spain, Thursday, November 29 2018. (Photo by Alvaro Barrientos/AP Photo) 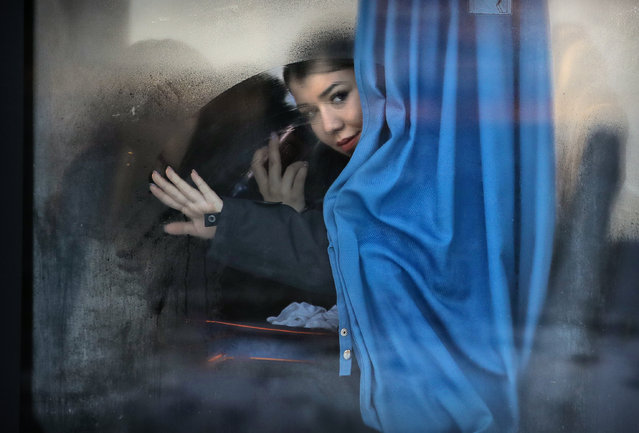 A military cadet wipes the steamy windows of a bus while waiting to take part in the military parade in Bucharest, Romania, Saturday, December 1, 2018, as thousands turned out Saturday to celebrate 100-years since Romania became a modern-day state, amid concerns about rule of law and the state of democracy. Crowds braved temperatures of minus 5 Celsius (23 Fahrenheit) to watch the military parade of troops, tanks and military vehicles. (Photo by Vadim Ghirda/AP Photo) 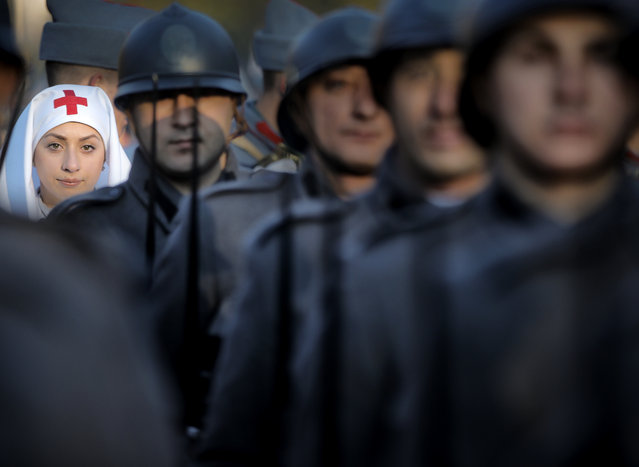 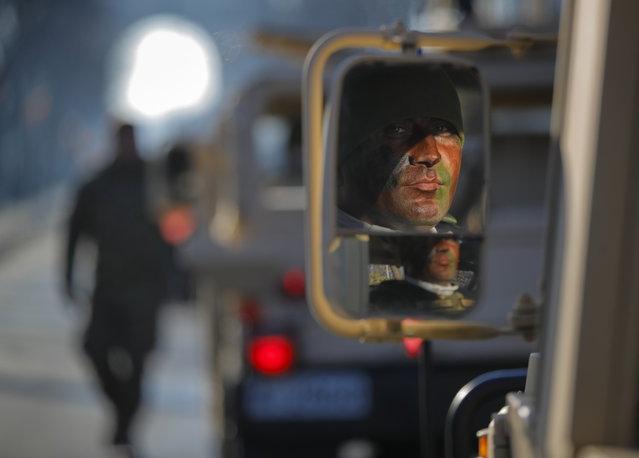 A member of the special operation forces is reflected in the rearview mirror of a vehicle before taking part the military parade in Bucharest, Romania, Saturday, December 1, 2018. (Photo by Vadim Ghirda/AP Photo) 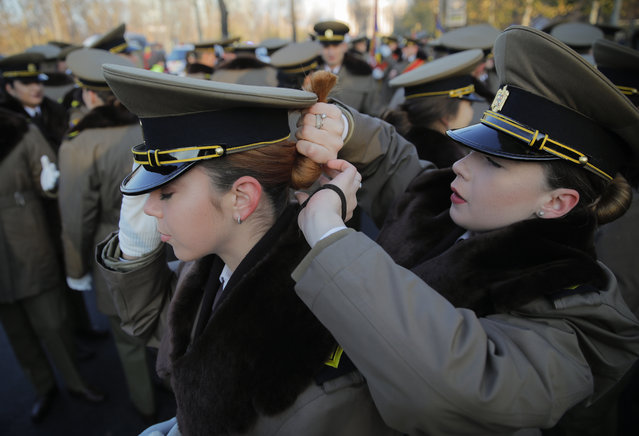 A military cadet gets help from a colleague to adjust her hair before taking part the military parade in Bucharest, Romania, Saturday, December 1, 2018. (Photo by Vadim Ghirda/AP Photo) 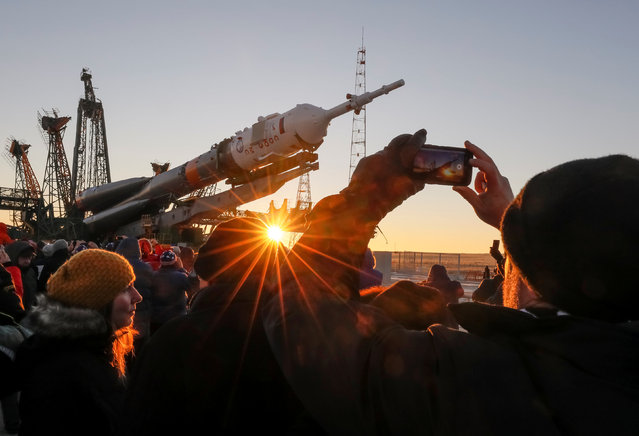 Spectators watch the Soyuz MS-11 spacecraft for the next International Space Station (ISS) crew, comprising of David Saint-Jacques of Canada, Oleg Kononenko of Russia and Anne McClain of the U.S., is ready to be set on the launchpad ahead of its upcoming launch, at the Baikonur Cosmodrome, Kazakhstan December 1, 2018. (Photo by Shamil Zhumatov/Reuters) 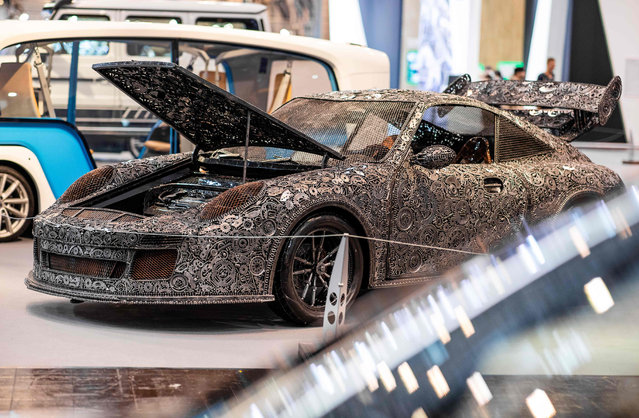 A Porsche 911 GT3 RS assembled out of scrap metal parts is on display at the Tuning Fair auto show in Essen, Germany on November 30, 2018. (Photo by Marcel Kusch/AFP Photo) 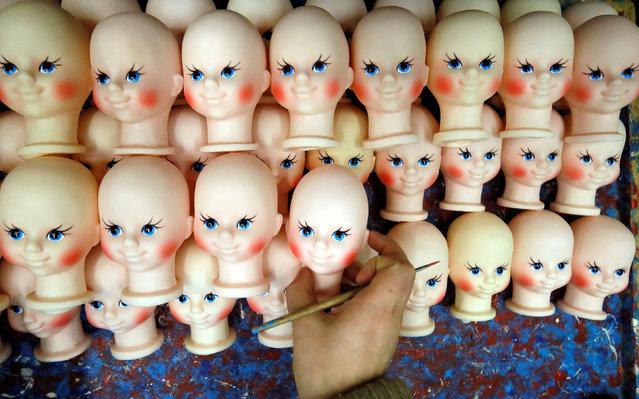 An employee paints heads of Snegurochka (Snow Maiden), granddaugter of Father Frost, at the “Biryusinka” toy factory, which has been producing decorations and toys for the festive season since 1942, in Krasnoyarsk, Russia on November 29, 2018. (Photo by Ilya Naymushin/Reuters) 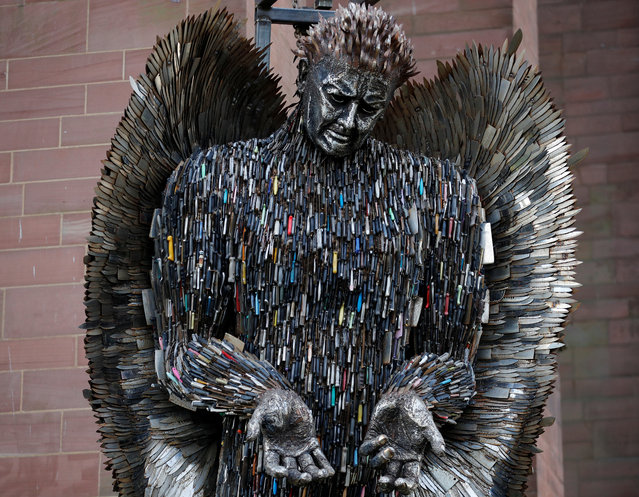 The “Angel of Knives” sculpture by artist Alfie Bradley, made from over 100,000 confiscated knives, goes on display outside the Anglican Cathedral, in Liverpool, Britain, November 29, 2018. (Photo by Phil Noble/Reuters) 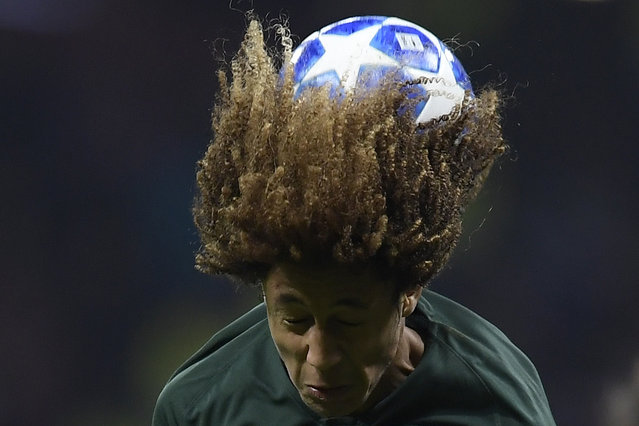 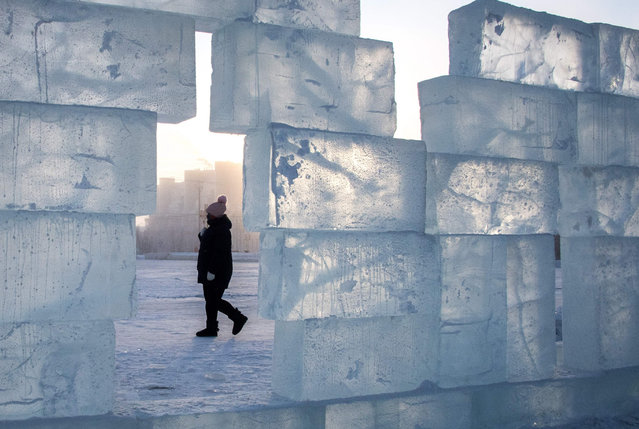 A woman walks behind an ice wall set up at the central square of the eastern Siberian town of Yakutsk with the air temperature at about minus 39 degrees Celsius on November 29, 2018. (Photo by Mladen Antonov/AFP Photo) 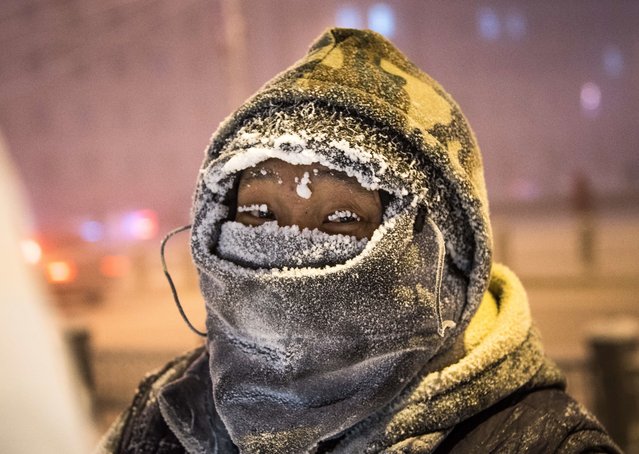 A artist poses while working on an ice sculpture on a street of the eastern Siberian city of Yakutsk, with the air temperature at about minus 40 degrees Celsius, on November 30, 2018. Yakutsk is considered to be the coldest city in the world. (Photo by Mladen Antonov/AFP Photo) 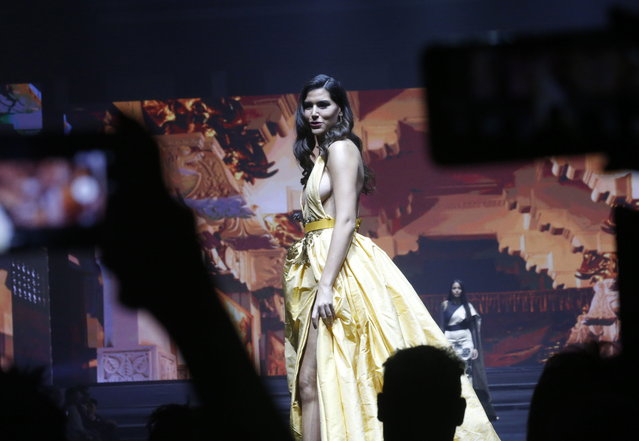 One of the beauty queens from 35 countries displays a creation by Thai Silk during the opening ceremony of the first International Thai Silk Fashion Week 2018 in Bangkok, Thailand, 01 December 2018. The International Thai Silk Fashion Week 2018 as part of the 8th Celebration of Silk under the theme “Thai Silk Road to the World”, to showcase modern and traditional Thai silk and design from more than 50 international fashion designers and top Thai designers, will held from 01 to 09 December 2018. (Photo by Narong Sangnak/AFP Photo) 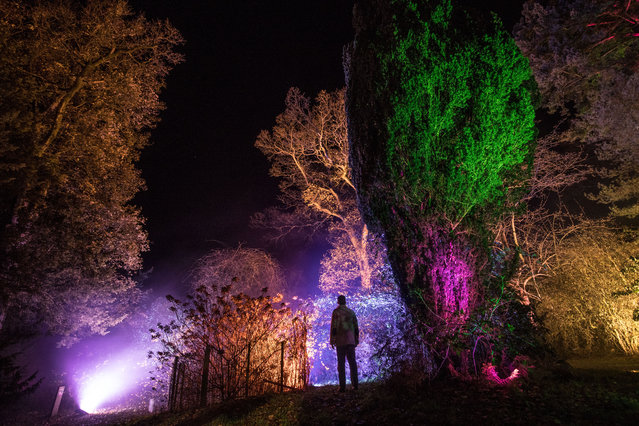 A man looks at trees that are illuminated at a preview for this year's Enchanted Christmas at the Forestry Commission's Westonbirt Arboretum near Tetbury, on November 29, 2018 in Gloucestershire, England. The popular annual festive attraction, which features illuminations and interactive features along the trail, will take place on weekends from the December 1 until December 23. (Photo by Matt Cardy/Getty Images) 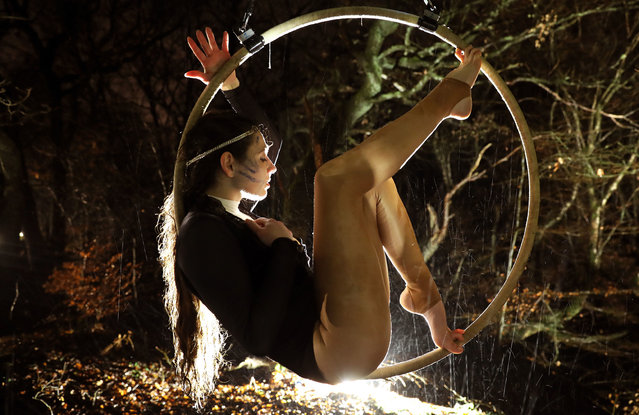