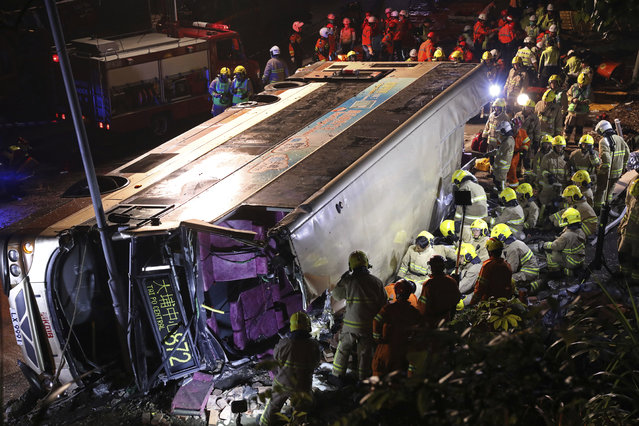 Firemen hurry to try to remove injured passengers from a double-decker lying on its side in Hong Kong, Saturday, February 10, 2018. A double-decker bus crashed in a Hong Kong suburb on Saturday evening, killing 18 people and injuring dozens more, authorities in the southern Chinese city said. (Photo by Apple Daily via AP Photo) 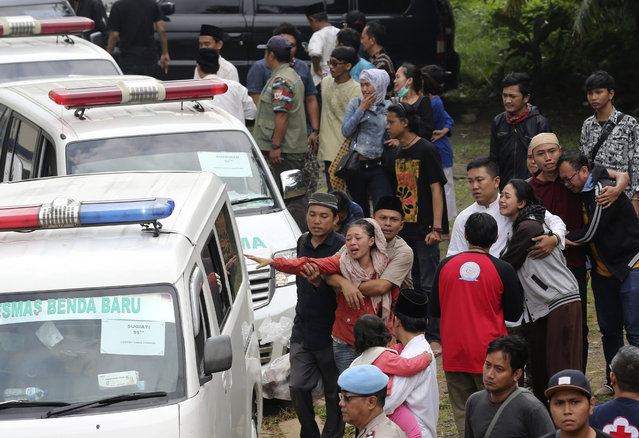 Relatives react as ambulances carrying the bodies of the victims of a bus accident arrive at their home village in East Ciputat, Indonesia, Sunday, February 11, 2018. A packed tourist bus returning from an outing collided with a motorbike and plunged from a hill on Indonesia's main island of Java after its brakes apparently malfunctioned. (Photo by Tatan Syuflana/AP Photo) 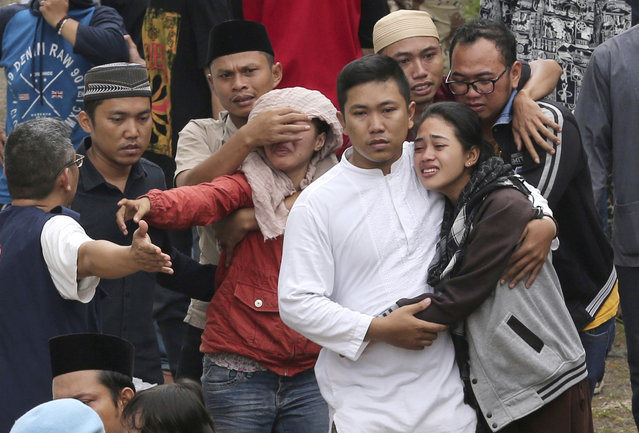 Relatives react as ambulances carrying the bodies of the victims of a bus accident arrive at their home village in East Ciputat, Indonesia, Sunday, February 11, 2018. A packed tourist bus returning from an outing collided with a motorbike and plunged from a hill on Indonesia's main island of Java after its brakes apparently malfunctioned Saturday. (Photo by Tatan Syuflana/AP Photo) 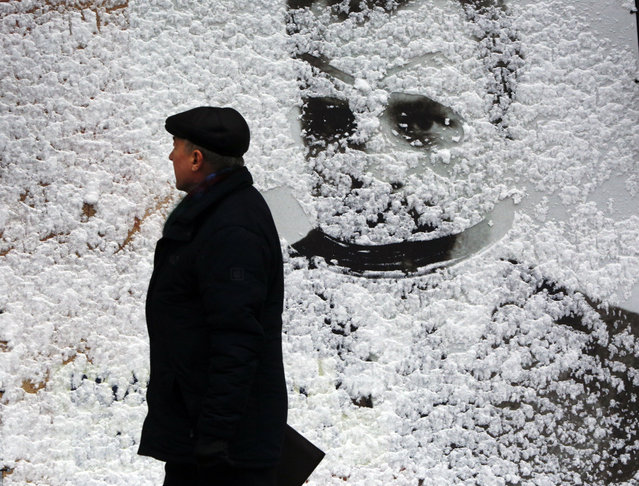 A man passes by a big board covered with snow in central Kiev, Ukraine, Friday, February 9, 2018. (Photo by Efrem Lukatsky/AP Photo) 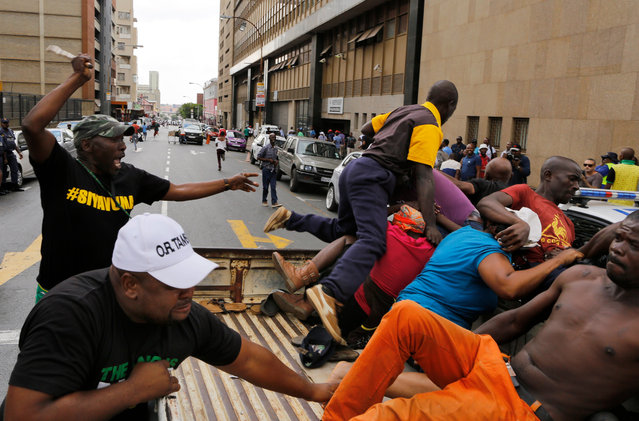 Members of the ANC (African National Congress) attack people on the back of a pick up truck whom they suspect of being members of the BLF (Black Land First) party, outside the ANC head offices in Johannesburg, South Africa, 05 February 2018. The ANC said it would protect its offices against any attacks by other parties. President Zuma has been under a cloud of controversy surrounding allegations of corruption. The highest ANC party officials have been meeting to consider the South African President's future. (Photo by Kim Ludbrook/EPA/EFE) 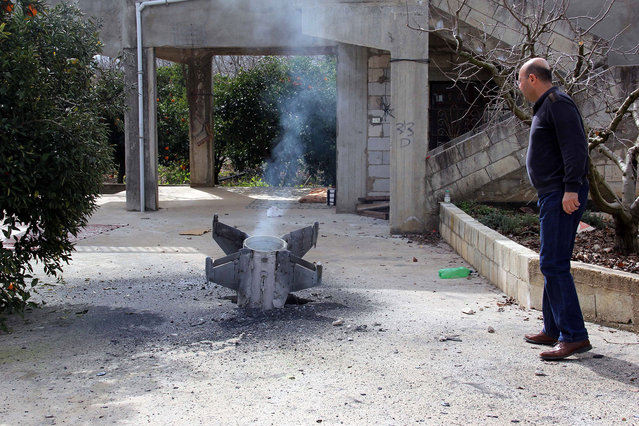 A picture taken on February 10, 2018, shows the remains of a missile that landed in the southern Lebanese village of Kaoukaba, near the border with Syria, after Israel's military attacked 12 Syrian and Iranian targets inside Syria in what it described as “large-scale” raids following an exchange of fire earlier in the day. The exchange of fire was the most serious between arch foes Israel and Iran since the start of the civil war in Syria in 2011. (Photo by Ali Dia/AFP Photo) 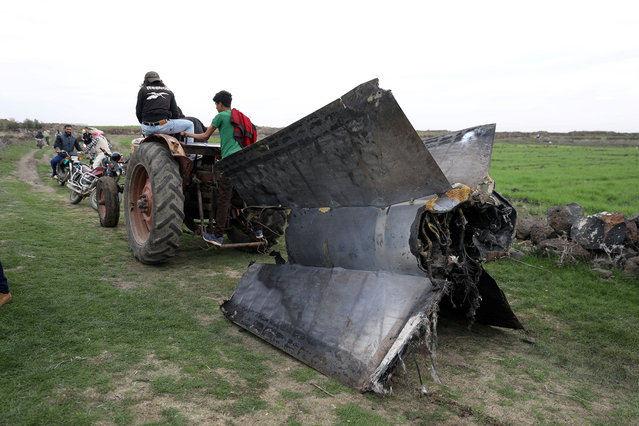 A tractor pulls a part of a missilein Quneitra, Syria, February 10, 2018. (Photo by Alaa al Faqir/Reuters) 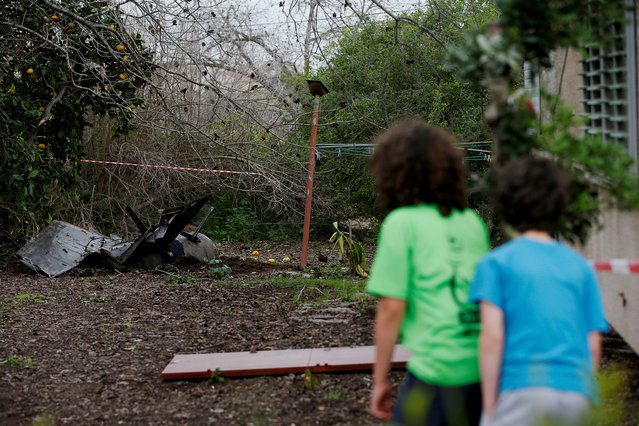 Kids look at fragments of a Syrian anti-aircraft missile found in Alonei Abba, about 2 miles (3.2 km) from where the remains of a crashed F-16 Israeli war plane were found, at the village of Alonei Abba, Israel, February 10, 2018. (Photo by Ronen Zvulun/Reuters) 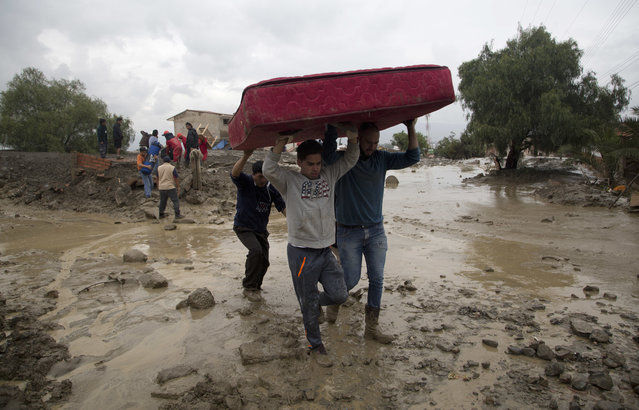 Men carry a mattress they salvaged from a flooded home in Tiquipaya near Cochabamba, Bolivia, Thursday, February 8, 2018. The overnight swelling of the Taquina river damaged buildings and covered streets in mud and rubble in the small community, about 150 miles (250 kilometers) east of La Paz. (Photo by Juan Karita/AP Photo) 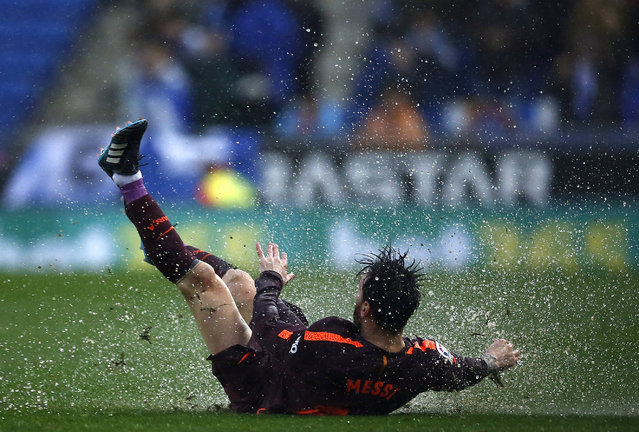 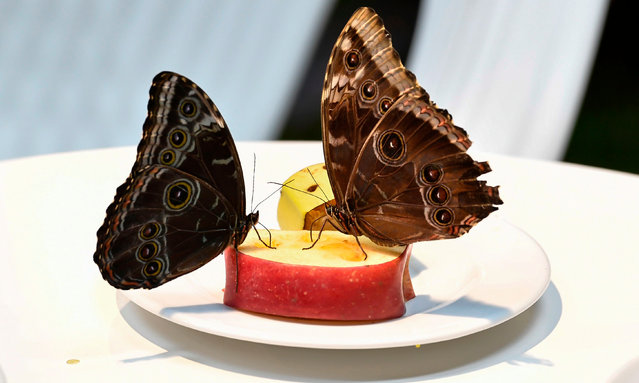 Butterflies feed on fruits placed on a table at the “Tea with Butterflies” exhibition at the SET (Tirso Event Space) in central Rome on February 9, 2018. Hundreds of tropical and native butterflies fly in a 500 sqm garden where a specific ecosystem has been created, to allow people to relax by having a cup of tea, while discovering the magnificent world of multicoloured wings moths. (Photo by Andreas Solaro/AFP Photo) 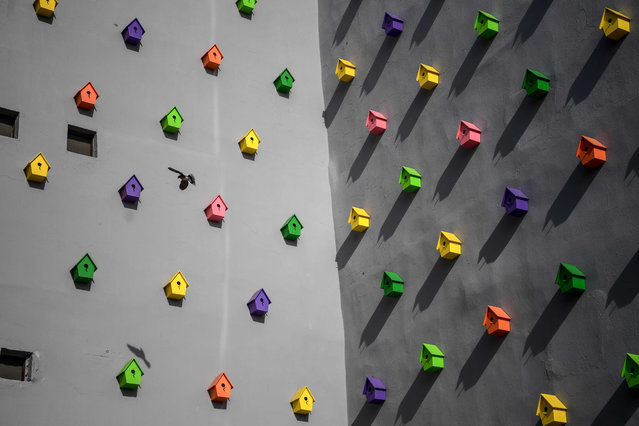 An art installation by Turkish artist Yan Kose featuring bird nesting boxes mounted on the side of an apartment building and entitled “Tek Göz Oda” (One eye room) is displayed on February 9, 2018 in Istanbul. (Photo by Ozan Kose/AFP Photo) 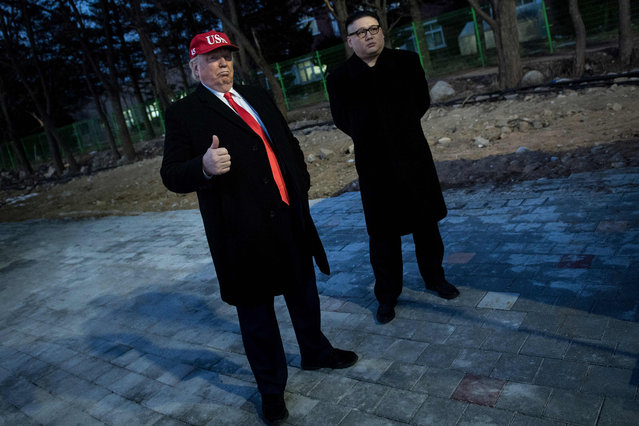 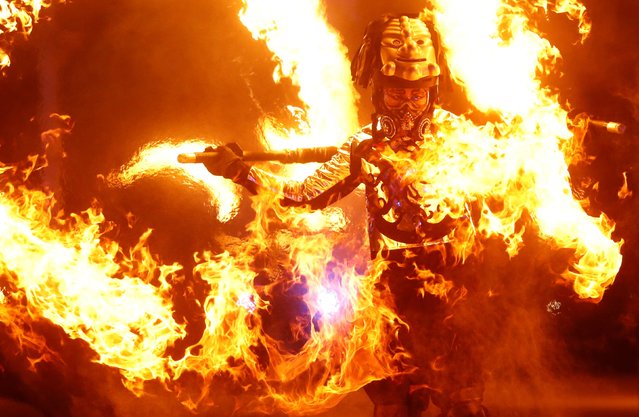 A dancer performs during the opening ceremony of the 2018 Winter Olympics in Pyeongchang, South Korea, Friday, February 9, 2018. (Photo by Kai Pfaffenbach/Reuters) 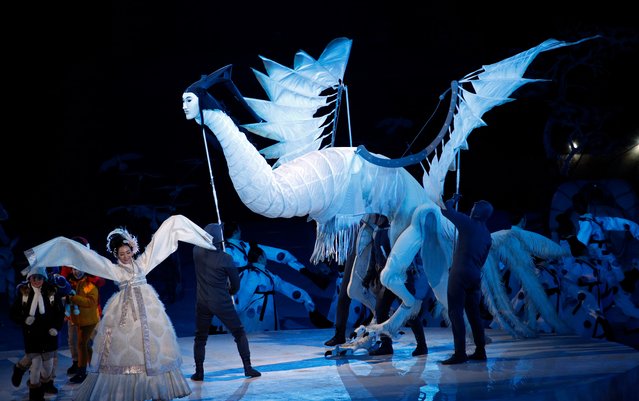 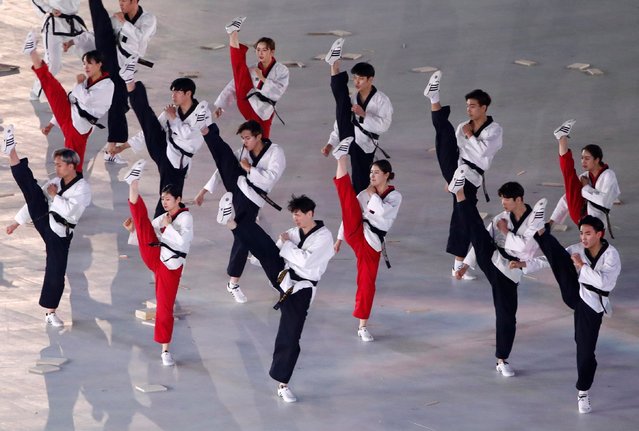 Martial arts practitioners from North Korea perform ahead of the opening ceremony of the 2018 Winter Olympics in Pyeongchang, South Korea, Friday, February 9, 2018. (Photo by Stefano Rellandini/Reuters) 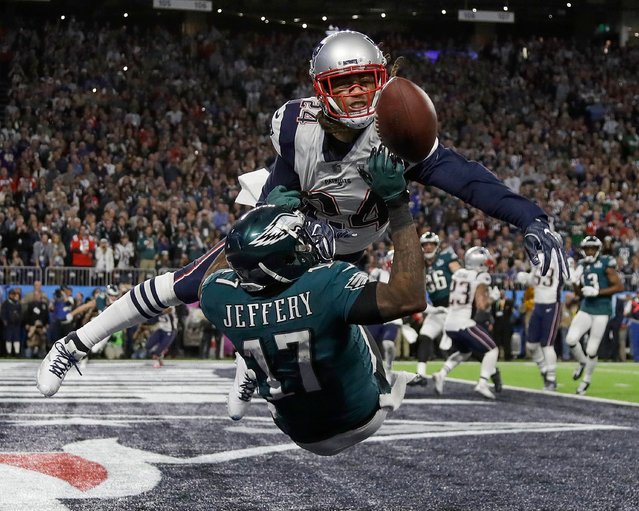 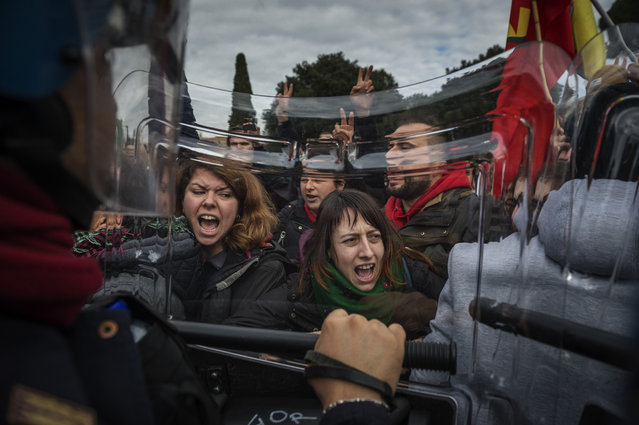 Kurdish protesters clash with Italian Police during a demonstration against the visit of Turkish president Recep Tayyip Erdogan, on February 5, 2018, near the Vatican in Rome, Italy. (Photo by Antonio Masiello/Getty Images) 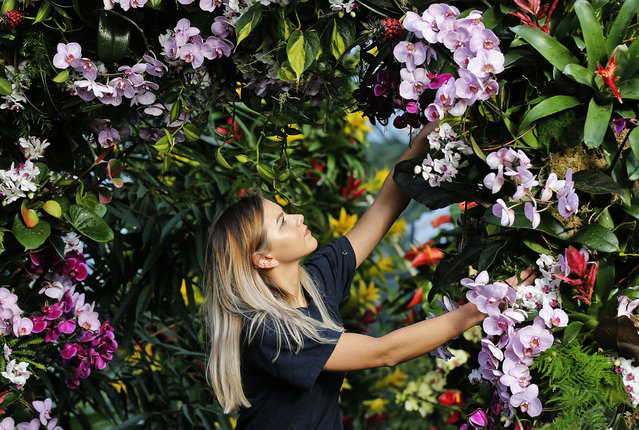 Employee Jenny Forgie works on an orchid display at Kew Gardens in London, Thursday, February 8, 2018. The 23rd annual Orchid Festival is the first one with a Thailand theme, 66 volunteers worked on the 6,950 exhibited orchids. The festival is open from Feb. 10, 2018 until March 11, 2018. (Photo by Frank Augstein/AP Photo) 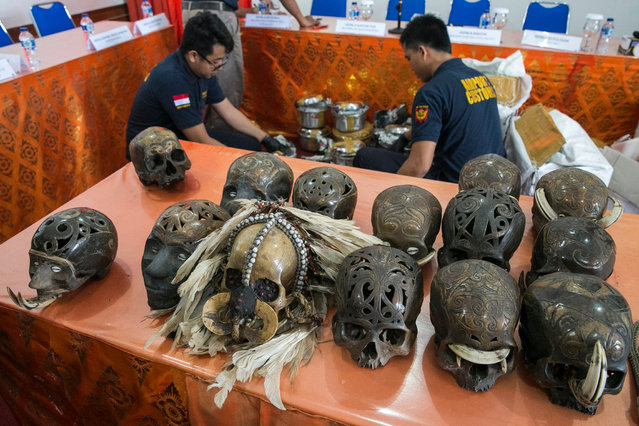 Indonesian customs officer displays seized human skulls during a press conference in Denpasar, Bali, Indonesia, 09 February 2018. Twenty-four human skulls were seized during a smuggling attempt from Bali to the Netherlands. (Photo by Made Nagi/EPA/EFE) 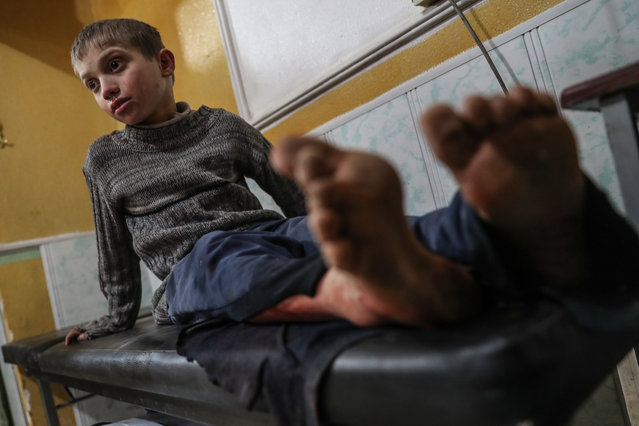 An injured child receives first aid in a hospital after a bombing in Douma, eastern Ghouta, Syria, 08 February 2018 (issued 09 February 2018). According to media reports, 75 people were killed in attacks allegedly carried out by forces loyal to the Syrian government on the rebel-held areas of eastern-Ghouta. (Photo by Mohammed Badra/EPA/EFE) 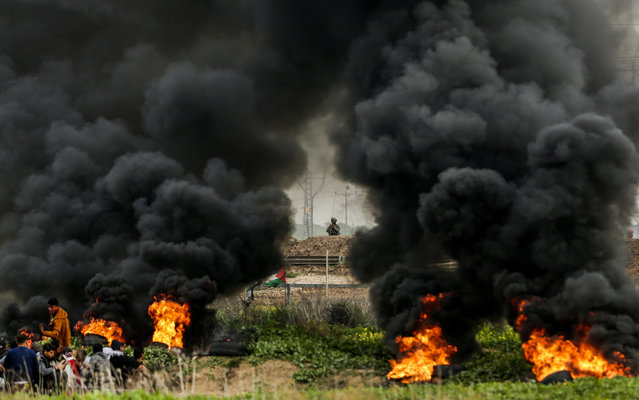 Palestinian protesters run amid the smoke during clashes with Israeli forces near the border with Israel east of Gaza city on February 9, 2018. (Photo by Mahmud Hams/AFP Photo) 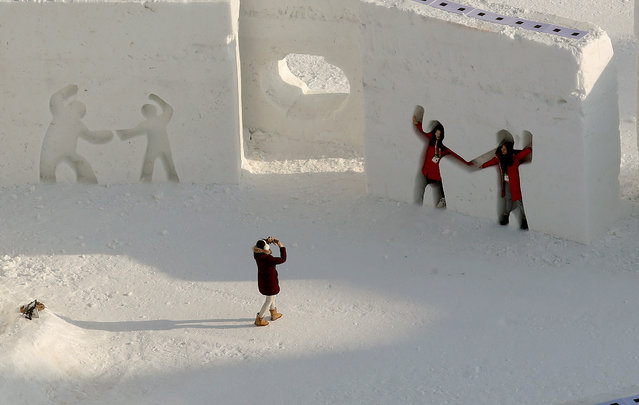 People pose for a picture ahead of the start of the Pyeongchang 2018 games at ic sculpture park near the Olympic Stadium in Pyeongchang, South Korea February 9, 2018. (Photo by Arnd Wiegmann/Reuters) 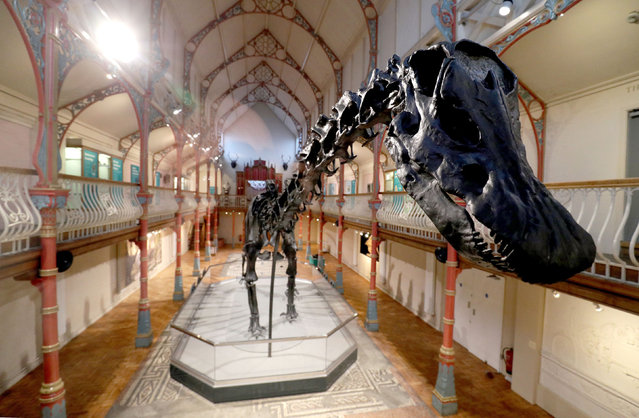 The Natural History Museum's Diplodocus skeleton cast, known as Dippy, is installed at Dorset County Museum in Dorchester on February 9, 2018, the first stop on a UK tour. (Photo by Andrew Matthews/PA Images via Getty Images) 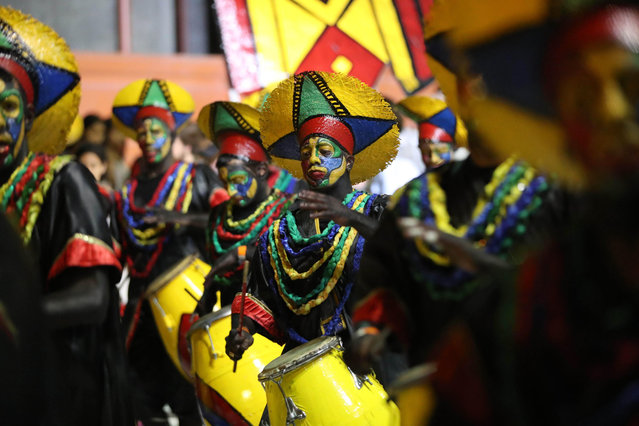 Members of a comparsa candombe perform during the Call parade for the Montevideo Carnival in Montevideo, Uruguay, 08 February 2018. Thousands of people, including Uruguayans and tourists, turned to the streets of Montevideo to celebrate the culminating party of the Uruguayan carnival which on 08 February completed its first day. (Photo by Raul Martinez/EPA/EFE)
Edit Del
11 Feb 2018 08:50:00, post received 0 comments
Publication archive:
←   →
Popular tags:
All tags
Last searches: