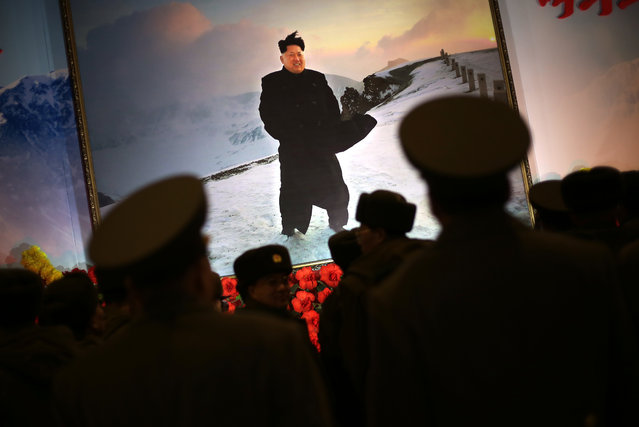 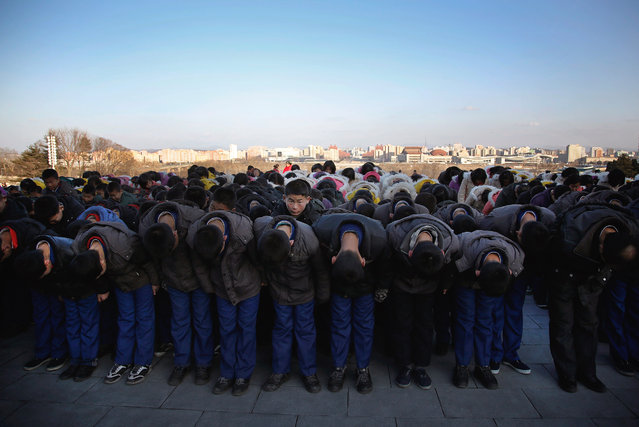 North Koreans gather at Munsu Hill to bow in front of bronze statues of late leaders Kim Il Sung and Kim Jong Il as part of celebrations a day before the birthday anniversary, or “Day of the Shining Star”, of Kim Jong Il on Monday, February 15, 2016, in Pyongyang, North Korea. (Photo by Wong Maye-E/AP Photo) 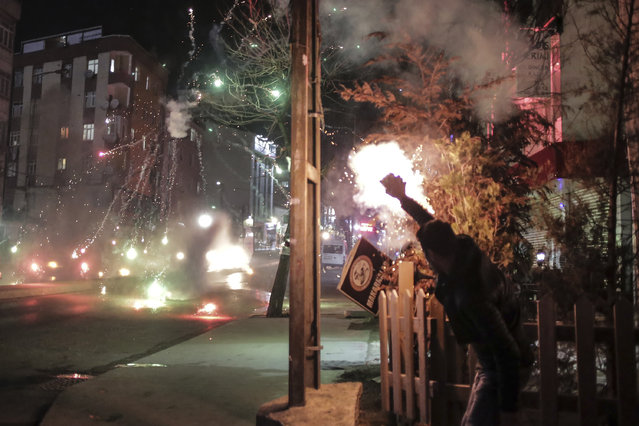 A protester launches firecrackers against a Turkish police water cannon during clashes in Istanbul, Sunday, February 14, 2016, between police forces and people protesting against security operations against Kurdish rebels in southeastern Turkey. Turkey imposed curfews in mainly Kurdish towns and districts in December while its security forces battled militants linked to the Kurdistan Workers' Party, or PKK, who set up barricades, dug trenches and primed explosives in the areas they have declared to be under Kurdish self-rule. (Photo by Cagdas Erdogan/AP Photo) 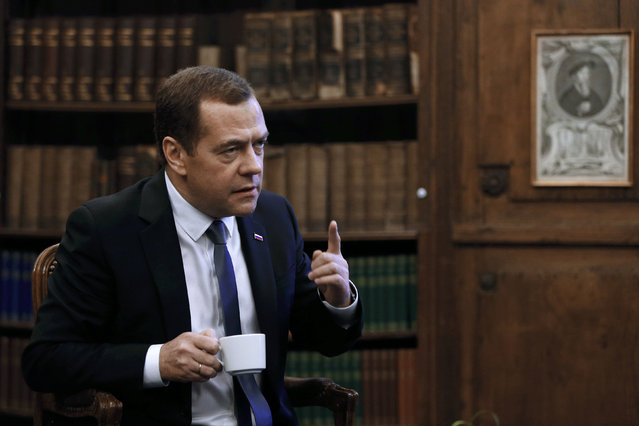 Russian Prime Minister Dmitry Medvedev speaks during an interview on the sidelines of the Munich Security Conference in Munich, Germany, February 13, 2016. Medvedev said in an interview that Moscow does not plan to maintain its military presence in Syria indefinitely. (Photo by Dmitry Astakhov/Reuters/Sputnik) 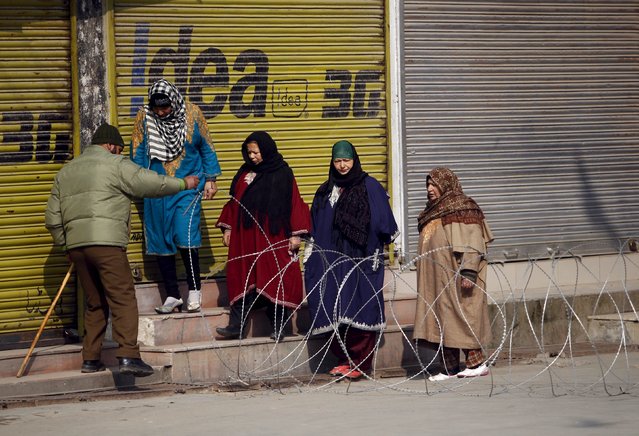 An Indian policeman partially removes concertina wire to allow Kashmir Muslim women to pass in front of the closed shops during restrictions in Srinagar February 15, 2016. Indian police in parts of Srinagar city on Monday imposed restrictions by sealing off many residential areas to prevent protests after Kashmiri separatists called for a shutdown against the deaths of two youths in Pulwama district on Sunday, local media reported. (Photo by Danish Ismail/Reuters) 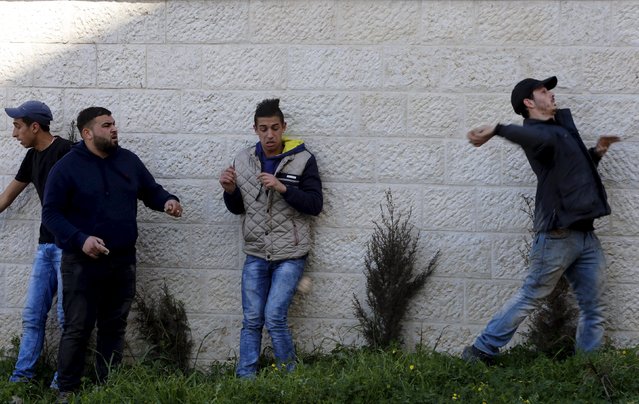 A Palestinian protester throws stones towards Israeli soldiers during clashes in al-Amari refugee camp near the West Bank city of Ramallah February 15, 2016. (Photo by Ammar Awad/Reuters) 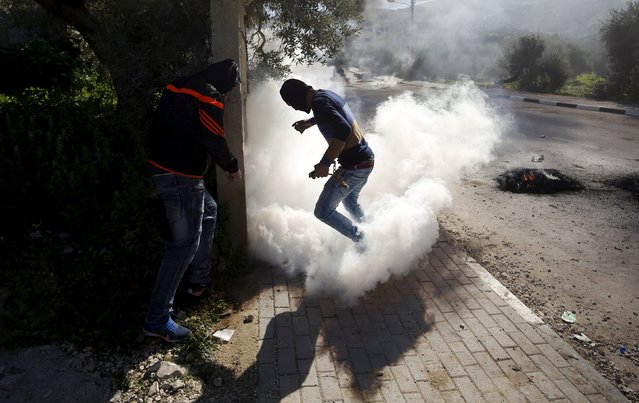 A Palestinian protester attempts to kick a tear gas canister fired by Israeli troops during clashes in the West Bank village of Araka near Jenin, February 15, 2016. (Photo by Mohamad Torokman/Reuters) 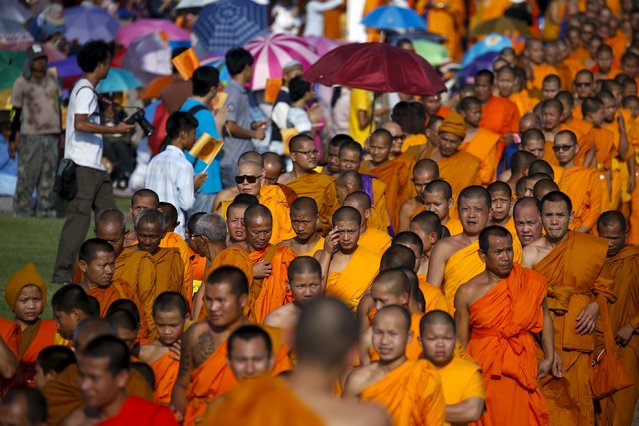 Buddhist monks take part in a protest against state interference in religious affairs at a temple in Nakhon Pathom province on the outskirts of Bangkok, Thailand, February 15, 2016. A handful of Buddhist monks scuffled with troops on Monday at a park near the Thai capital, during a protest against what they called state interference and a bid to overthrow the governing body of their religion. (Photo by Athit Perawongmeth/Reuters) 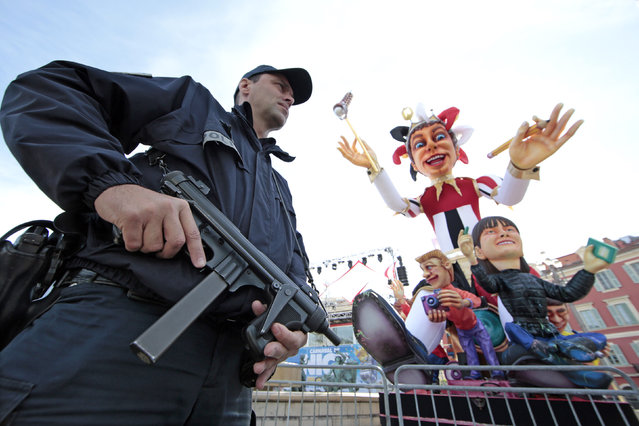 A police officer stands near the float of the King of Carnival as part of the “Vigipirate” security plan following Paris' deadly attacks in Nice, France, February 15, 2016. (Photo by Eric Gaillard/Reuters) 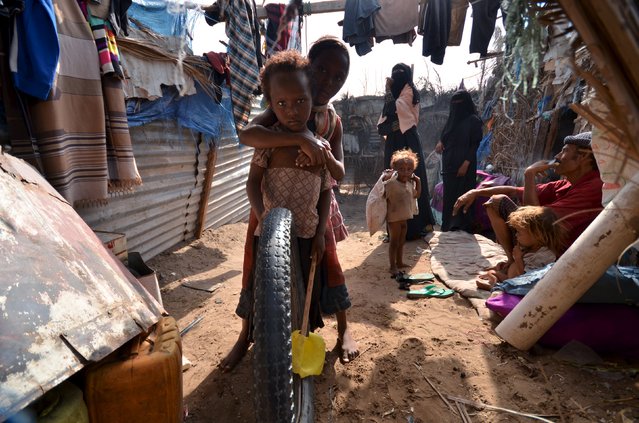 Girls stand in their family's hut in a slum neighbourhood in Yemen's Red Sea city of Houdieda, February 15, 2016. (Photo by Abduljabbar Zeyad/Reuters) 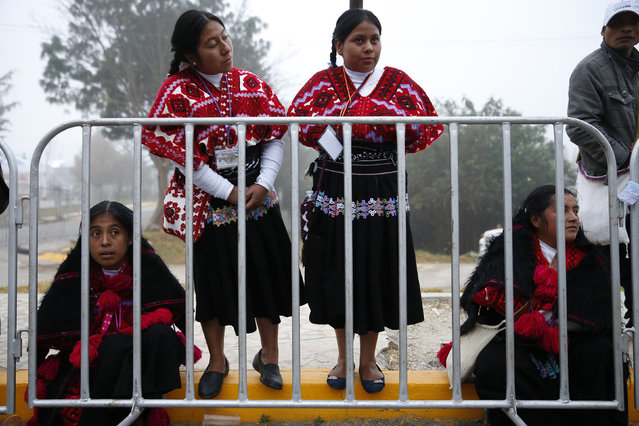 Indigenous women stand behind a barricade while waiting for Pope Francis to drive past before celebrating mass in San Cristobal de Las Casas, Mexico February 15, 2016. (Photo by Carlos Garcia Rawlins/Reuters) 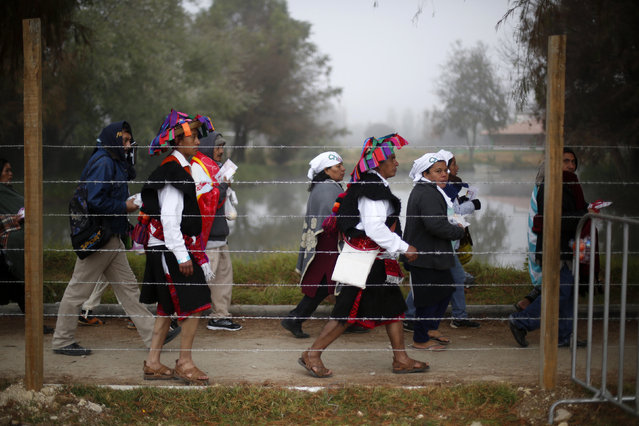 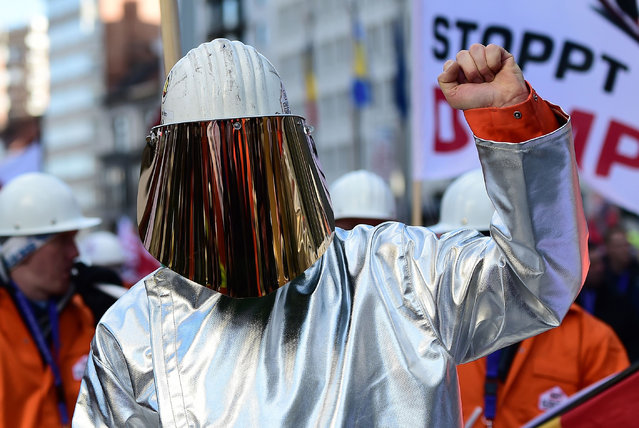 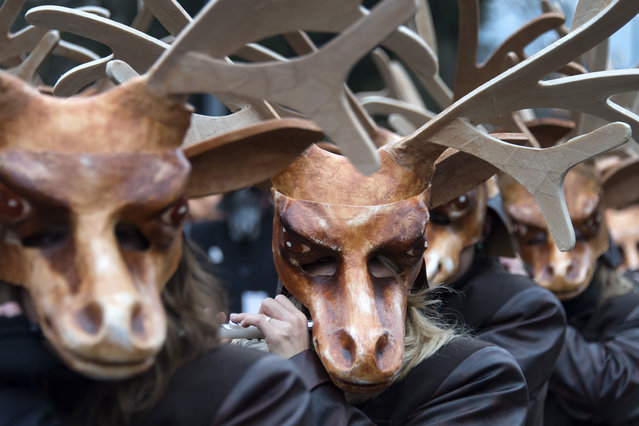 Revelers participate in a parade, during the Basel carnival in Basel, Switzerland, Monday February 15 2016. (Photo by Georgios Kefalas/Keystone via AP Photo) 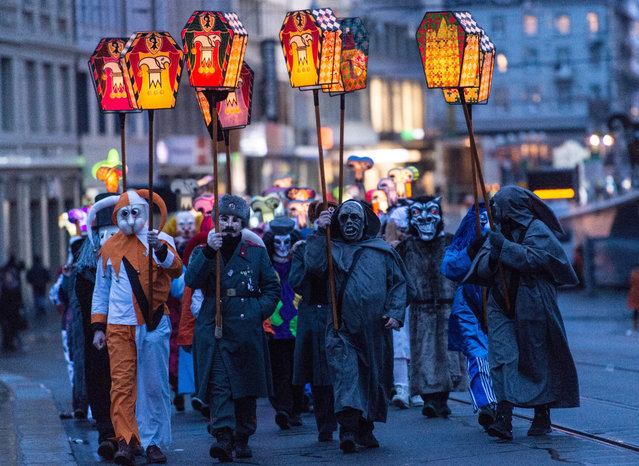 Revellers wearing lanterns parade through the streets during the carnival procession of Basel, Switzerland, 15 February 2016. The traditional Morgestraich starting Monday morning after Ash Wednesday at 4 a.m. marks the kick-off of the Carnival of Basel. (Photo by Patrick Seeger/EPA) 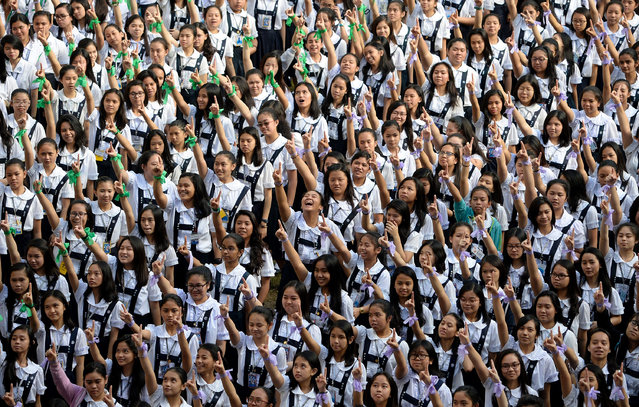 Students of St. Scholastica's College gesture the “number one” sign as they dance to take part in the “One Billion Rising” campaign in Manila on February 15, 2016. The campaign, the fifth to be held since 2012, calls for the end of all forms of discrimination and violence against women and girls. The movement refers to UN statistics that one in 3 women, about one billion globally, will be raped or beaten in their lifetime. (Photo by Noel Celis/AFP Photo) 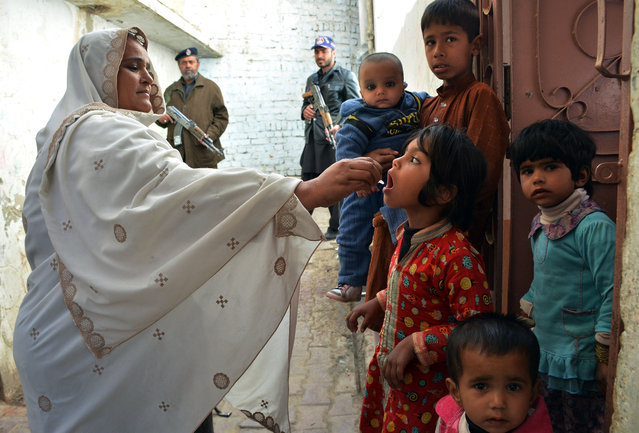 A Pakistani health worker administers polio drops to a child during a polio vaccination campaign in Quetta on February 15, 2016. Pakistan is one of only three countries in the world where polio remains endemic but years of efforts to stamp it out have been badly hit by reluctance from parents, opposition from militants and attacks on immunisation teams. (Photo by Banaras Khan/AFP Photo) 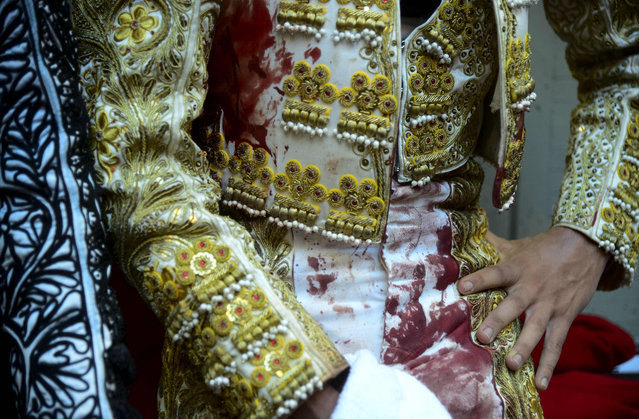 Bloodied Colombian bullfighter Juan de Castilla rests during his performance at the Macarena bullring on February 14, 2016 in Medellin, Antioquia department, Colombia. De Castilla began bullfighting with the support of Colombian artist Fernando Botero, paying tribute to his neighborhood, one of the most violent of the city, with a performance called in Spanish “Encerrona”, where the matador stands alone against all the bulls of the announced lineup. (Photo by Raul Arboleda/AFP Photo) 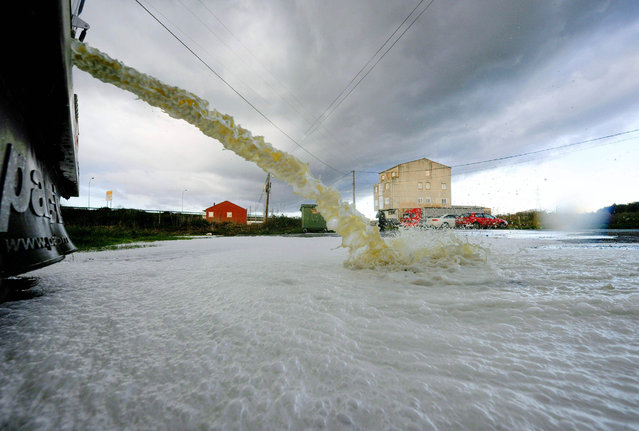 Protesting farmers empty milk from a refrigerated tanker coming from Portugal onto the ground during a protest action near the village of Monforte de Lemos, Northwestern Spain, on February 15, 2016. (Photo by AFP Photo/Stringer) 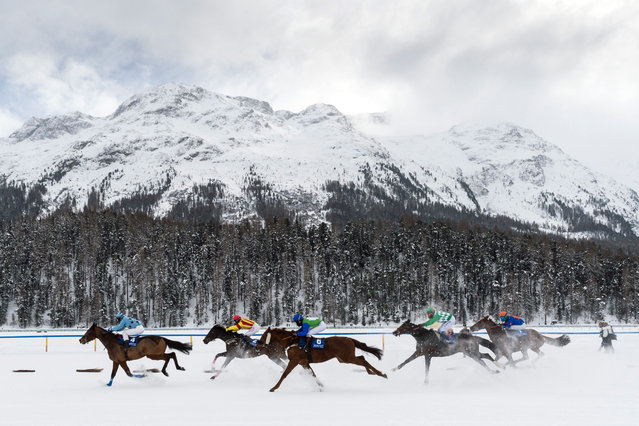 Fabian Xaver Weissmeier on Mateur, second from left, wins the Prize Wroclaw Euroean Capital of Culture 2016 on the frozen Lake St. Moritz on the second weekend of the White Turf races in St. Moritz, Switzerland, on Sunday, February 14, 2016. (Photo by Gian Ehrenzeller/Keystone via AP Photo) 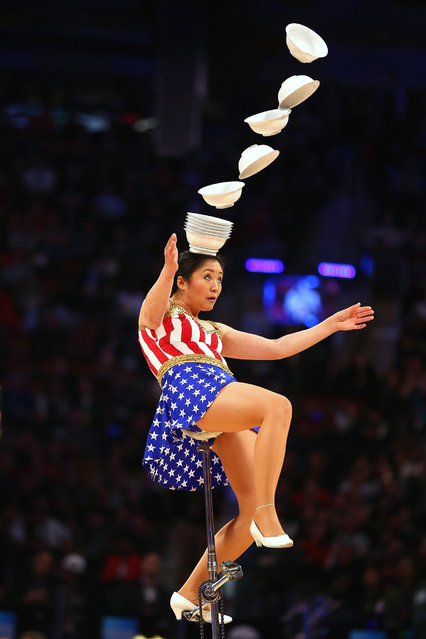 Red Panda performs in the first half during the NBA All-Star Game 2016 at the Air Canada Centre on February 14, 2016 in Toronto, Ontario. (Photo by Elsa/Getty Images) 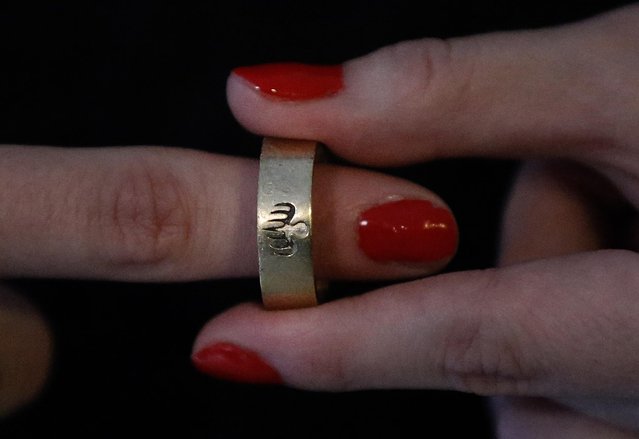 A Christie's employee tries the nine carat gold ring made for James Bond and the latest Spectre movie at the auction house Christie's in London, Monday, February 15, 2016. The ring is one of the 24 items of Spectre memorabilia come directly from the archives of EON Productions, with unique donations from Daniel Craig, Sam Mendes, Michael G. Wilson, Barbara Broccoli, Jesper Christensen and Sam Smith an it's auction on February 15,2016. An online-only sale will offer 14 lots and open for bidding from Tuesday Feb. 16, 2016. (Photo by Frank Augstein/AP Photo) 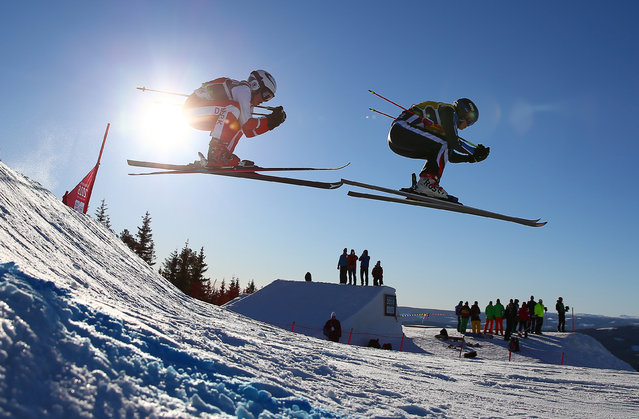 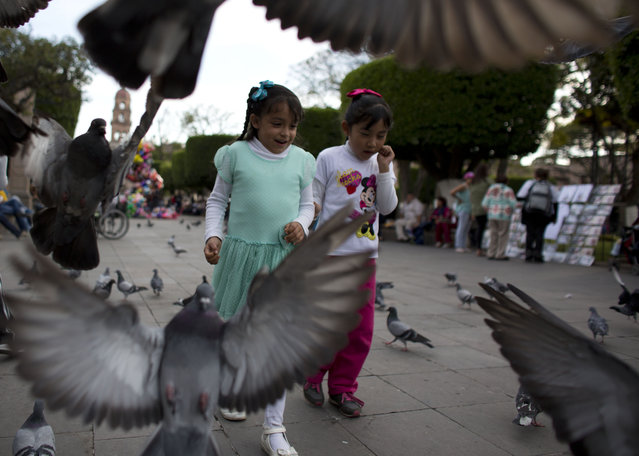 Girls chase pigeons in the Zocalo, or central square, in Morelia, Michoacan state, Mexico, Monday, February 15, 2016. On his one-day trip Tuesday to the capital of troubled Michoacan state, Pope Francis will visit the cathedral, meet with youth, and celebrate Mass with priests and seminarians, and religious men and women.(Photo by Rebecca Blackwell/AP Photo) 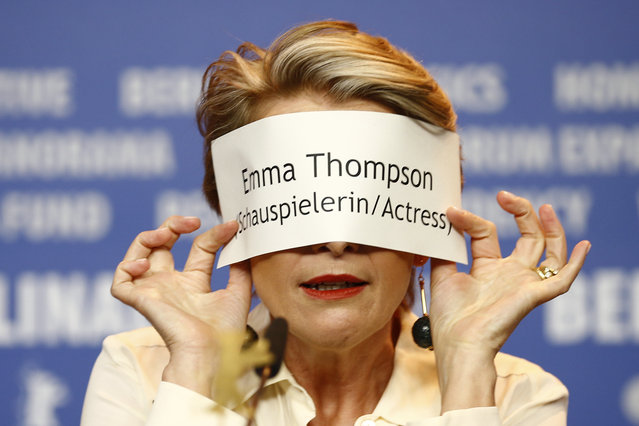 Actress Emma Thompson holds her name badge in front of her face during the press conference for the film “Alone in Berlin” at the 2016 Berlinale Film Festival in Berlin, Germany, Monday, February 15, 2016. (Photo by Axel Schmidt/AP Photo) 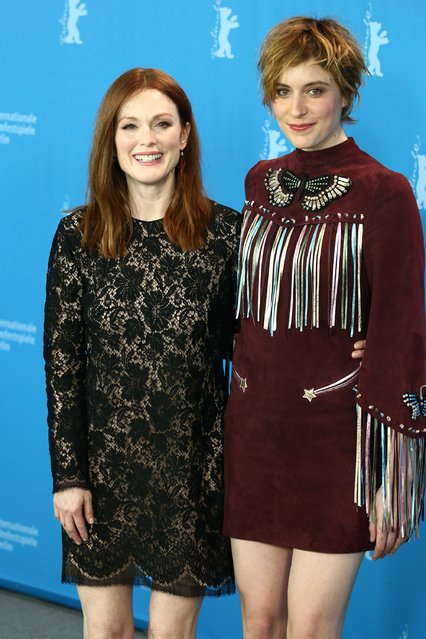 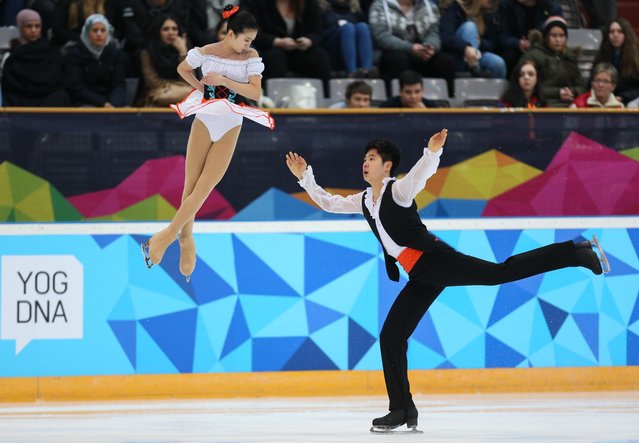