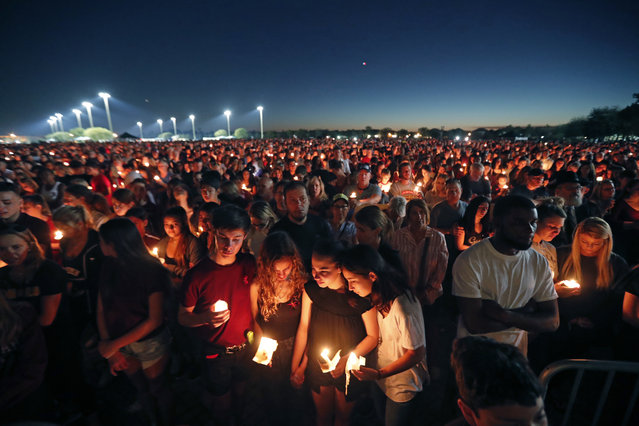 People attend a candlelight vigil for the victims of the Wednesday shooting at Marjory Stoneman Douglas High School, in Parkland, Fla., Thursday, February 15, 2018. Nikolas Cruz, a former student, was charged with 17 counts of premeditated murder on Thursday. (Photo by Gerald Herbert/AP Photo) 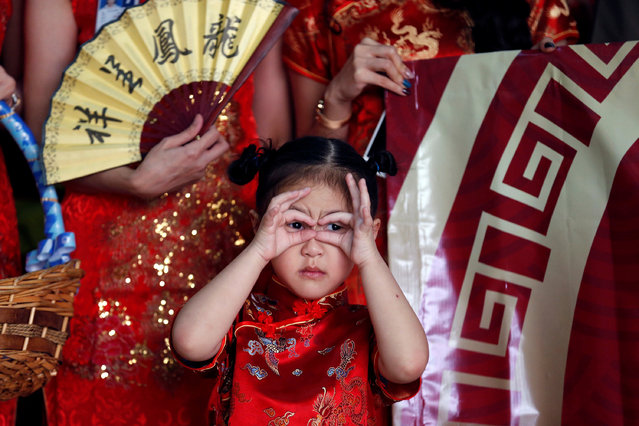 A girl is dressed in traditional Chinese clothing during a lunar new year welcome ceremony for Chinese tourists at Don Mueang international airport in Bangkok, Thailand on February 16, 2018. (Photo by Soe Zeya Tun/Reuters) 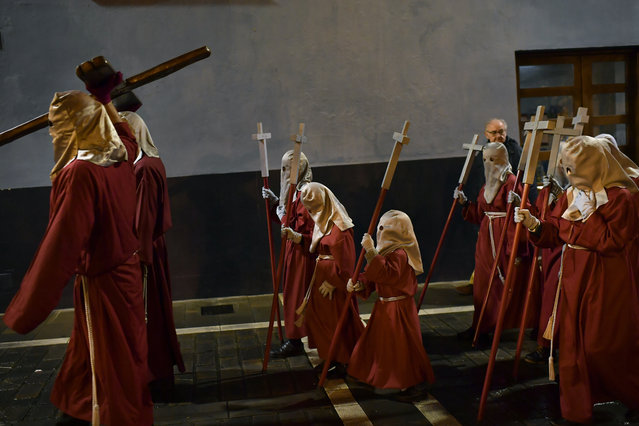 Young penitents of the “Hermandad del Senor” brotherhood take part in the “Cristo Alzado” procession during the Ash Wednesday, a day after the celebration of traditional carnivals, in Pamplona, Spain, Wednesday, February 14, 2018. (Photo by Alvaro Barrientos/AP Photo) 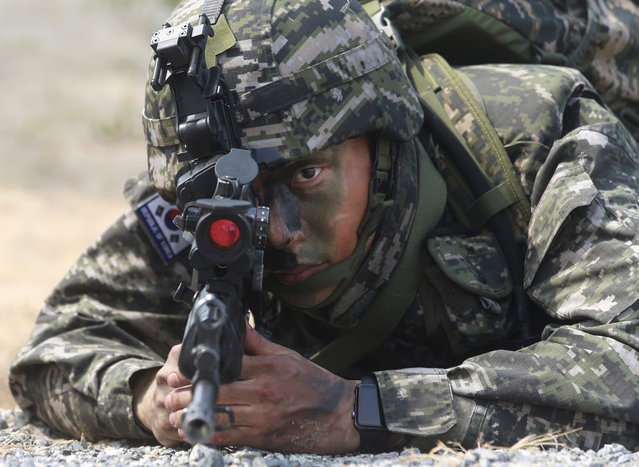 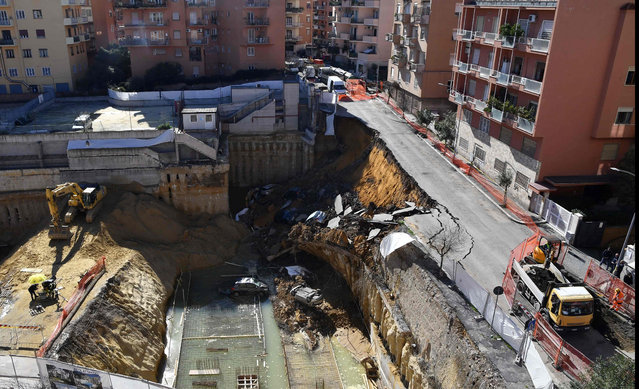 The picture taken on February 15, 2018 in the street of Balduina' s district in Rome shows a general view of a huge sinkhole that opened up the day before in Rome, swallowing six cars. No casualties were reported About 22 families were evacuated by firefighters following the collapse. The cause of the sinkhole is still under investigation. (Photo by Tiziana Fabi/AFP Photo) 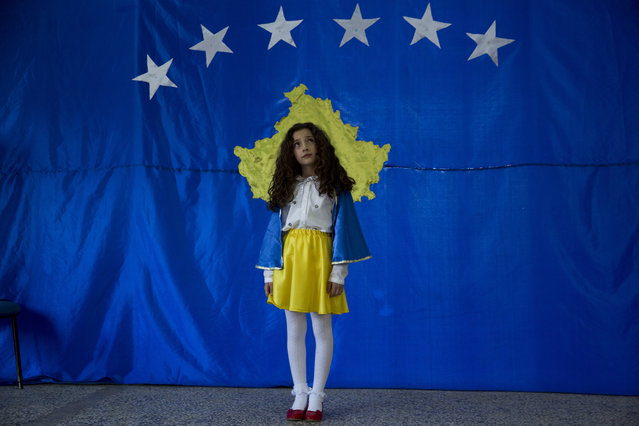 A student named Pavarsia Sopi, 10 poses for a photo in front of flag of Kosovo during an independence celebration ceremony at a school in the village of Sllovi near the town of Lipjan, Kosovo on Friday February 16, 2018, ahead of the upcoming 10th independence anniversary. A student of the school, Pavaresia Sopi, 10, was the first child born after Kosovo declared independence from Serbia in 2008. Pavaresia translates in English as “Independence”. (Photo by Visar Kryeziu/AP Photo) 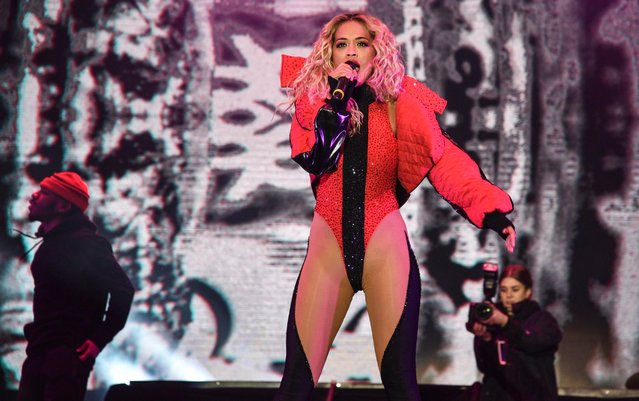 British singer of Kosovo origin Rita Ora performs on stage during her concert for the 10th anniversary of Kosovo Independence, in Pristina, Serbia, 17 February 2018. (Photo by Petrit Prenaj/EPA/EFE) 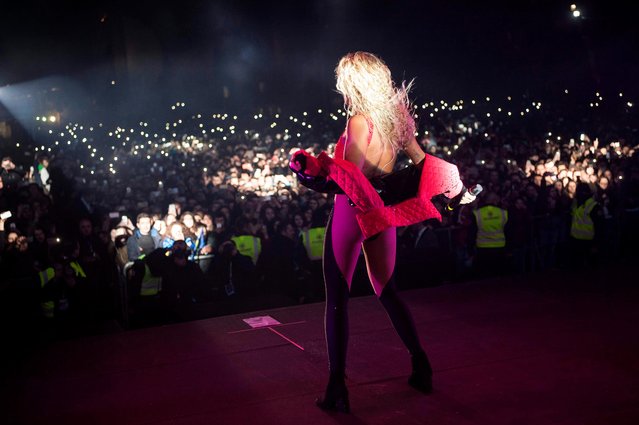 Kosovo- born British singer and actress Rita Ora performs in Pristina on February 17, 2018 on the occasion of the 10 th anniversary of Kosovo Independence. Kosovo celebrates 10 years since it declared independence, a moment of pride for its ethnic Albanian majority, although sovereignty remains fiercely contested by Serbia. (Photo by Armend Nimani/AFP Photo) 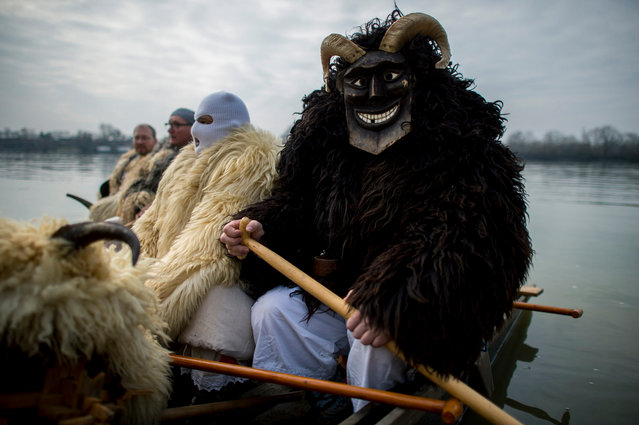 Men wearing sheepfur costumes with horns and masks prepare to paddle a boat across River Danube from an island to Mohacs, some 210 kms south of Budapest, to participate in the traditional carnival parade of the town 11 February 2018.The carnival parade of people dressed in similar costumes and frightening wooden masks, using various noisy wooden rattlers is traditionally held on the seventh weekend before Easter to drive away winter, and is a revival of a legend, which says the ethnic Croats crossed the river to ambush the Osmanli Turkish troops, who escaped in panic seeing the terrifying figures during the Turkish occupation of Hungary. (Photo by Tamas Soki/EPA/EFE) 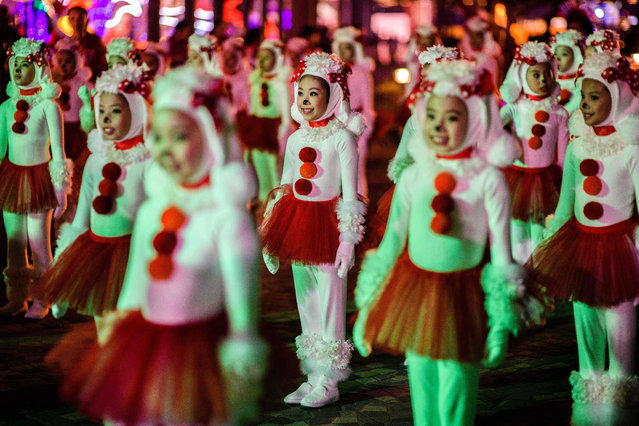 Performers take part in a street parade to mark the Lunar New Year celebrations for the Year of the Dog in Hong Kong on February 16, 2018. (Photo by Anthony Wallace/AFP Photo) 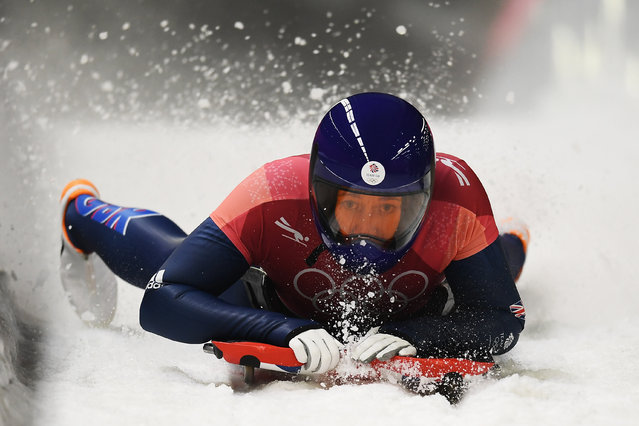 Lizzy Yarnold of Great Britain slides into the finish area during the Women's Skeleton heat one at Olympic Sliding Centre on February 16, 2018 in Pyeongchang-gun, South Korea. (Photo by Quinn Rooney/Getty Images) 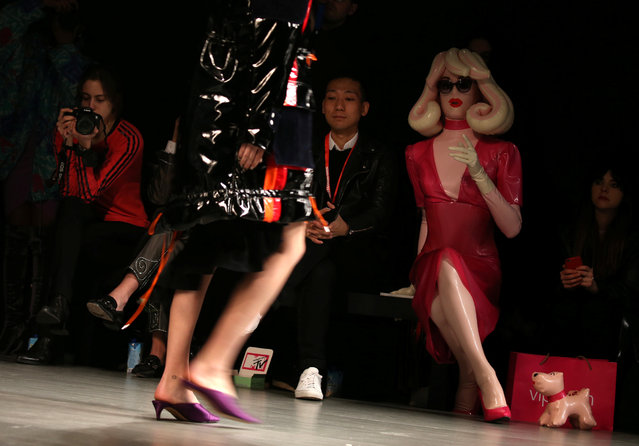 Members of the audience look on during the Fyodor Golan show at London Fashion Week, in London, England on February 16, 2018. (Photo by Paul Hackett/Reuters) 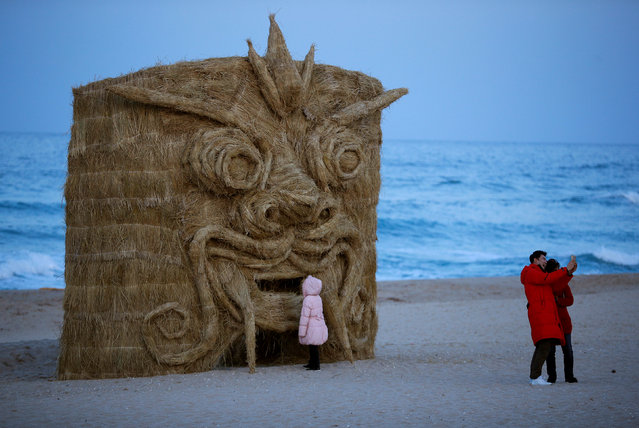 A child touches an art installation before it is set ablaze at Gyeongpo Beach during the Pyeongchang 2018 Winter Olympics in Gangneung, South Korea, February 17, 2018. (Photo by Phil Noble/Reuters) 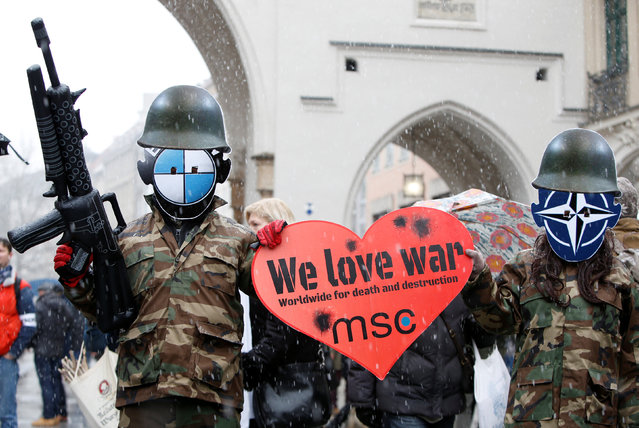 Protesters hold up a heart-shaped sign at a demonstration during the Munich Security Conference in Munich, Germany, February 17, 2018. (Photo by Michaela Rehle/Reuters) 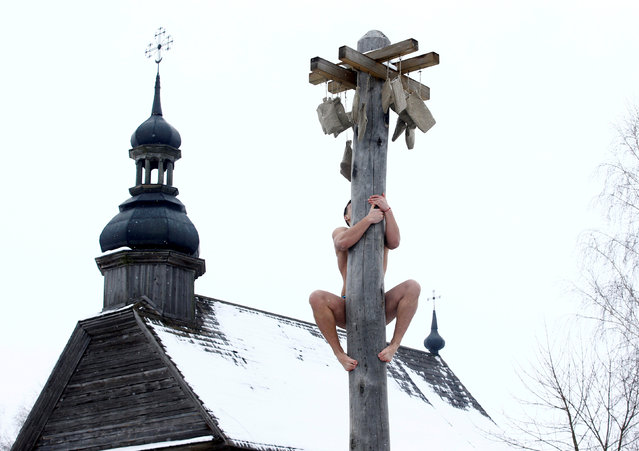 A man climbs up a wooden pole to get a prize during celebration of Maslenitsa, or Pancake Week, in Belarusian state museum of folk architecture and rural lifestyle near the village Aziarco, Belarus, February 17, 2018. (Photo by Vasily Fedosenko/Reuters) 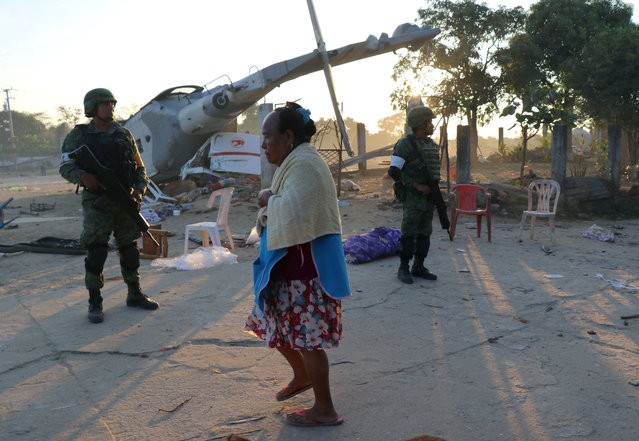 Soldiers stand guard next to a military helicopter, carrying Mexico's interior minister and the governor of the southern state of Oaxaca, crashed on top of two vans in an open field while trying to land in Santiago Jamiltepec, Mexico on February 17, 2018. (Photo by Jorge Luis Plata/Reuters) 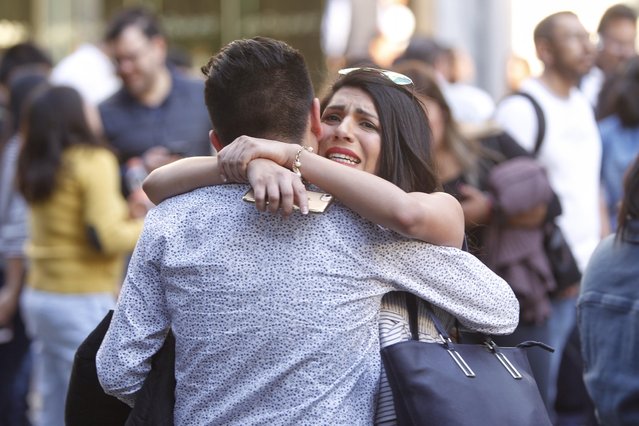 People wait outside their offices and vehicles after an earthquake, in Mexico City, Mexico, 16 February 2018. A 7.2 magnitude earthquake shook Mexico City, the center and south of the country today at 5:39 pm local time (23:39 GMT) with epicenter on the Pacific coast, reported the National Seismological Service. (Photo by Sashenka Gutierrez/AFP Photo) Grace Capristo during the Bulgari “RVLE YOUR NIGHT” event during the 68th Berlinale International Film Festival on February 15, 2018 in Berlin, Germany. (Photo by Franziska Krug/Getty Images for Bulgari) 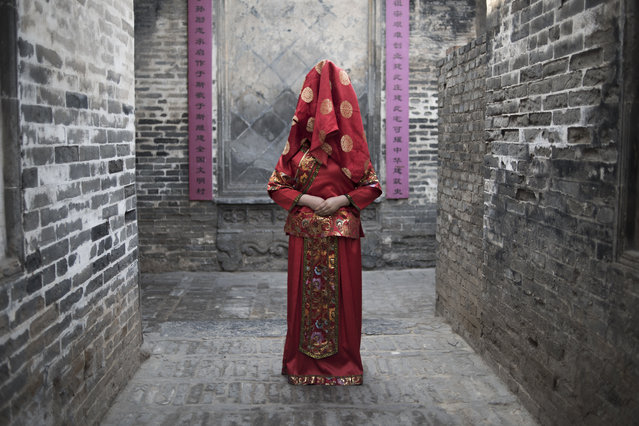 A Chinese woman dressed with a traditional bride costume, poses during a wedding performance as part of the She Huo festival, to celebrate the Lunar New Year, marking the Year of the Dog, in Hancheng, Shaanxi province, on February 16, 2018. The Lunar New Year falls on February 16 this year, with celebrations in China scheduled to last for a week. She Huo festival, celebrated in the northwestern China, is a festival dedicated to the gods of earth and fire. “She” literally means “God of Earth” and huo means “God of Fire”. (Photo by Fred Dufour/AFP Photo) 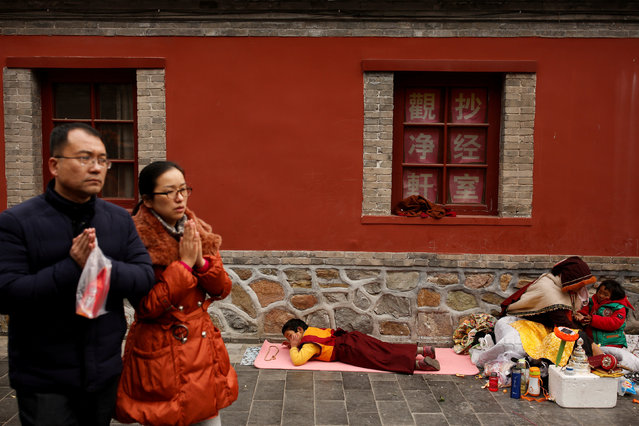 Chinese people make a gesture of prayer as they walk past a Tibetan family at a Buddhist temple in Badachu park during Spring Festival celebrations marking Chinese New Year in Beijing, China, February 17, 2018. (Photo by Thomas Peter/Reuters) 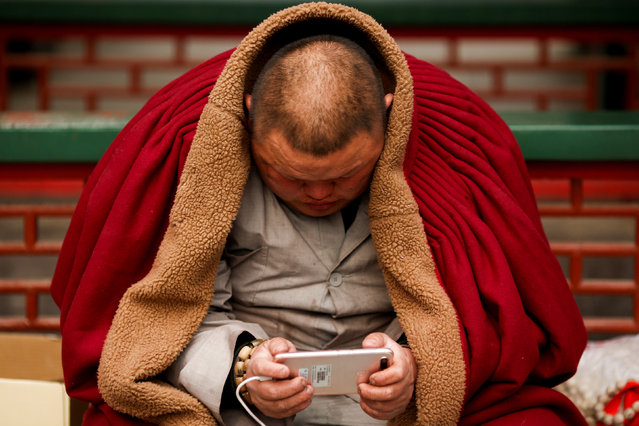 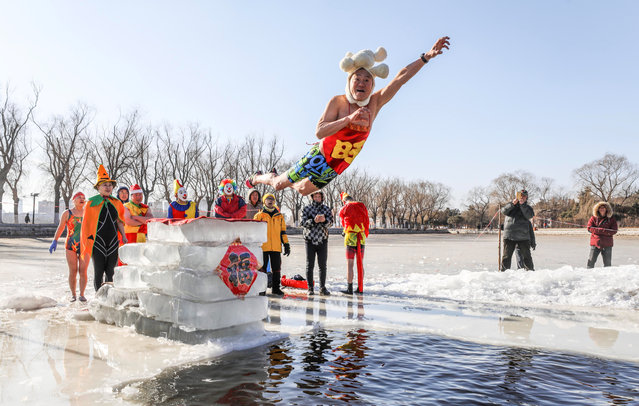 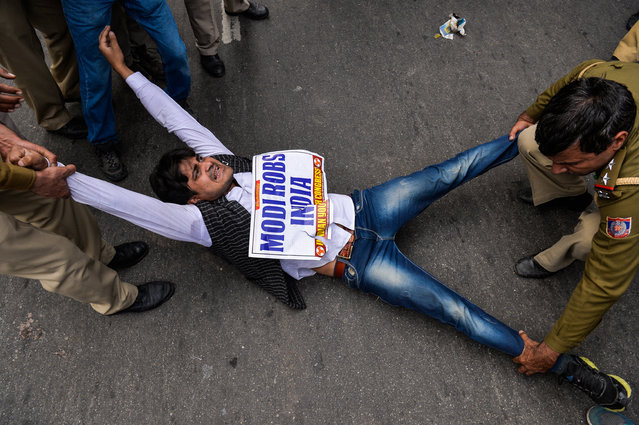 An Indian supporter of the Congress Party shout slogans as police detain him during a protest against billionaire jeweller Nirav Modi in New Delhi on February 16, 2018. Indian investigators on February 15 raided the premises of a billionaire jeweller accused of defrauding one of the country's biggest banks. Enforcement Directorate (ED) officers searched the Mumbai offices of Nirav Modi after he was accused of cheating state-owned Punjab National Bank (PNB) of 2.8 billion rupees ($43.8 million). (Photo by Chandan Khanna/AFP Photo) 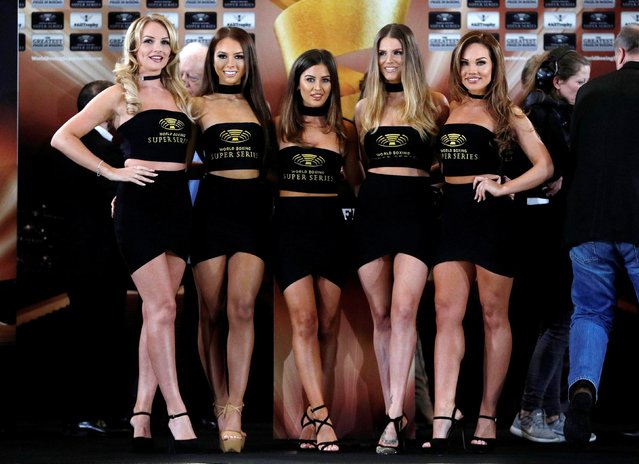