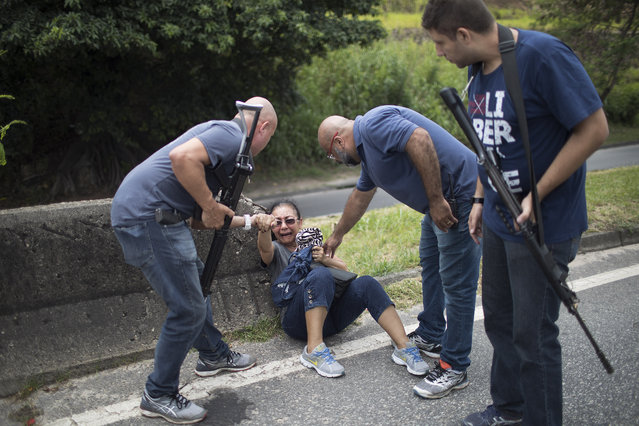 Police officers help a woman who was taking cover during a confrontation between police and suspected drug traffickers along the road known as the Linha Amarela, or Yellow Line, in Rio de Janeiro, Brazil, Wednesday, January 31, 2018. The firefight apparently spilled onto the multiple-lane road in northern Rio during a police operation in City of God, a violent shantytown that was featured in 2002 Oscar-nominated film by the same name. (Photo by Leo Correa/AP Photo) 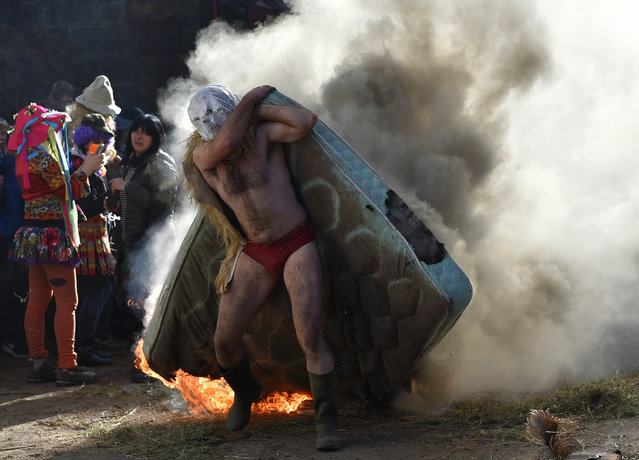 A masked participant carries a burning matress during the ancient carnival of Zubieta, in the northern Spanish Navarra province on January 30, 2018. The yearly three day festivities, revolving mainly around agriculture and principally sheep hearding, run on the last Sunday, Monday and Tuesday of January where Navarra Valley locals from two villages dress up and participate in a variety of activites as they perform a pilgrimage through each village. (Photo by Ander Gillenea/AFP Photo) 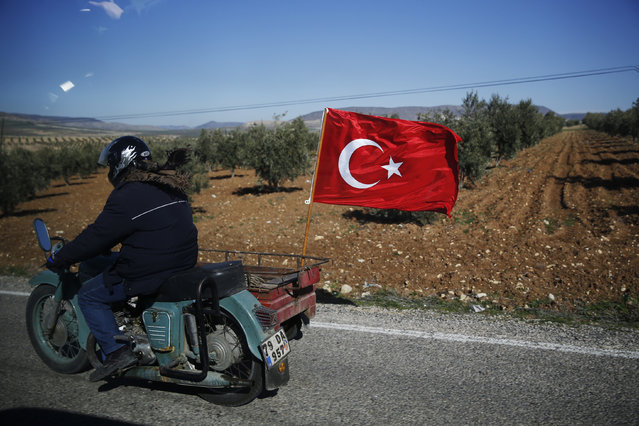 A Turkish motorcyclist drives on the outskirts of the border town of Kilis, Turkey, in support of Turkish troops, Tuesday, January 30, 2018. Turkey launched a military offensive against Afrin on Jan. 20 to drive out the Syrian Kurdish People's Protection Units, or YPG, which is says are an extension of the outlawed Kurdish rebels inside Turkey. (Photo by Lefteris Pitarakis/AP Photo) 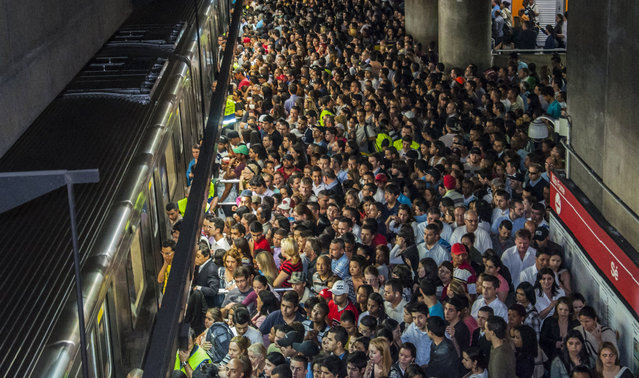 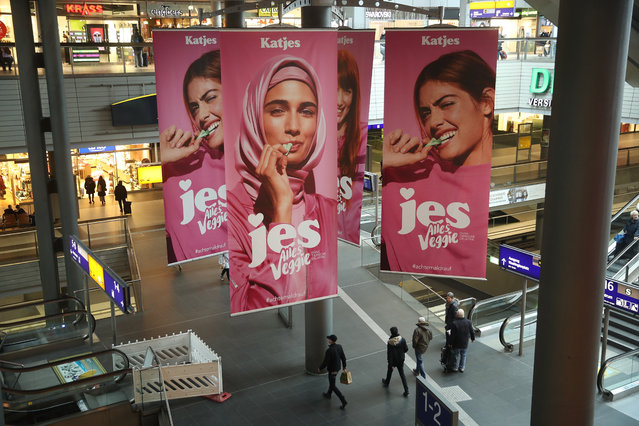 Advertisements for a new line of vegetarian sweets by German candymaker Katjes feature a Muslim woman wearing a headscarf and three non-covered women at Hauptbahnhof railway station on January 31, 2018 in Berlin, Germany. The campaign, which also has video clips that are running online, has provoked indignant protest on social media by critics charging the campaign promotes suppression of women's rights and encourages the “Islamization” of Germany. Germany's AfD right-wing political party has risen to political prominence largely by successfully appealing to Germans who fear the presence of Muslim refugees and immigrants. (Photo by Sean Gallup/Getty Images) 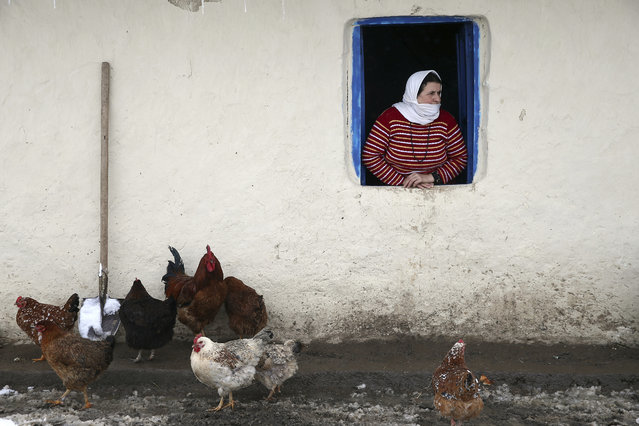 In this Sunday, January 28, 2018 photo, a nomadic woman looks out from a window of her house in the Talesh area close to the Caspian Sea some 262 miles (430 kilometers) northeast of the capital Tehran, Iran. Due to heavy snow and shortage of grasses, Talesh nomads descend from top heights to foothills in cold seasons and return in late spring, in Alborz mountain range. (Photo by Ebrahim Noroozi/AP Photo) 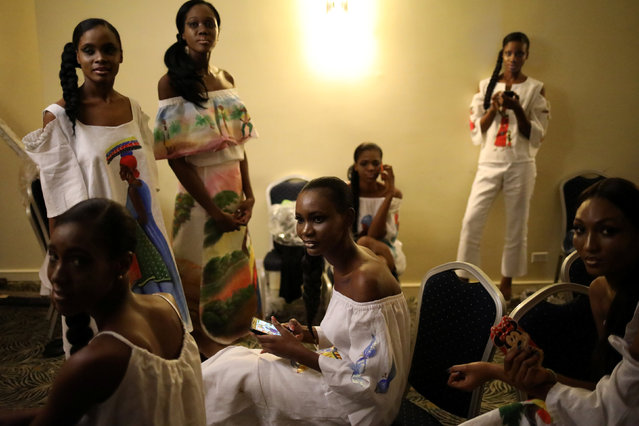 Models wait before presenting creations on the runway at the Haiti Fashion Week in Port-au-Prince, Haiti, January 30, 2018. (Photo by Andres Martinez Casares/Reuters) 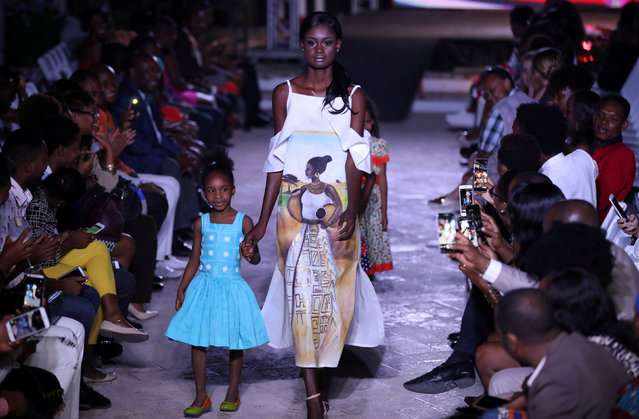 A model presents a creation from Magda Nicolas on the runway at the Haiti Fashion Week in Port-au-Prince, Haiti, January 30, 2018. (Photo by Andres Martinez Casares/Reuters) 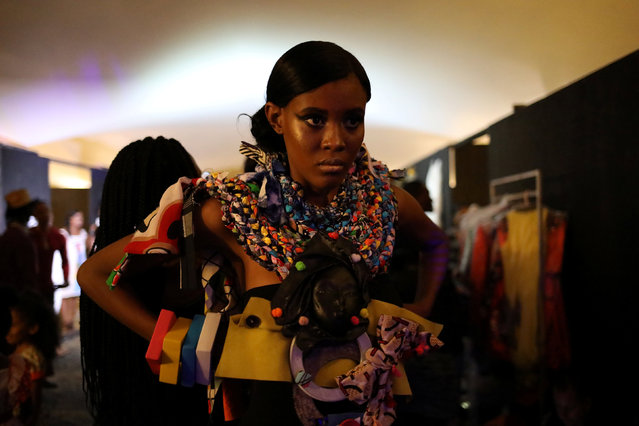 A model gets ready to walk down the runway at the Haiti Fashion Week in Port-au-Prince, Haiti, January 30, 2018. (Photo by Andres Martinez Casares/Reuters) 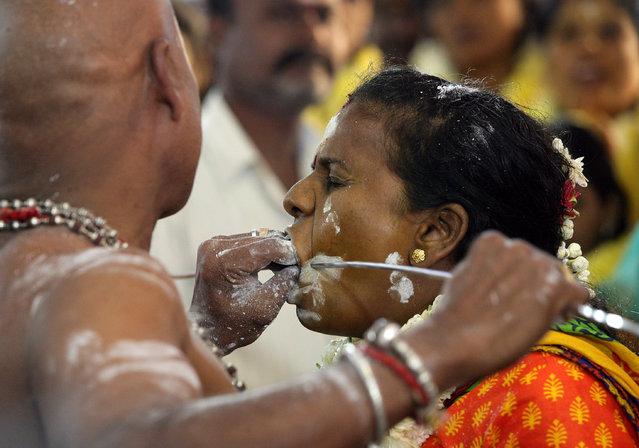 A Hindu devotee reacts as she gets her cheeks pierced with a metal skewer during the Thaipusam festival in Chennai, India, January 31, 2018. (Photo by P. Ravikumar/Reuters) 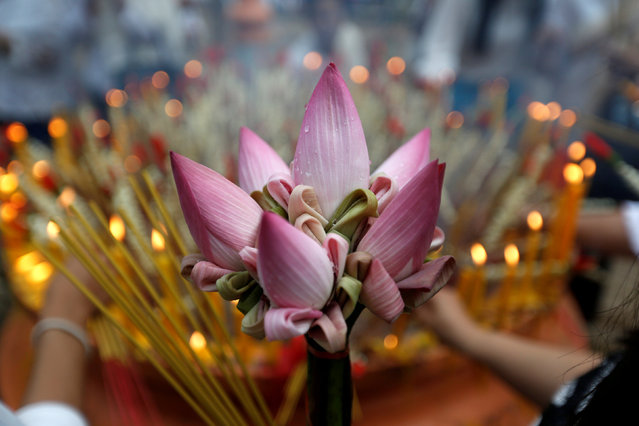 A lotus flower is seen while people pray at the Oudong mountain during the annual Makha Bucha Day which celebrates Buddha's teachings in Kandal province, Cambodia, January 31, 2018. (Photo by Samrang Pring/Reuters) 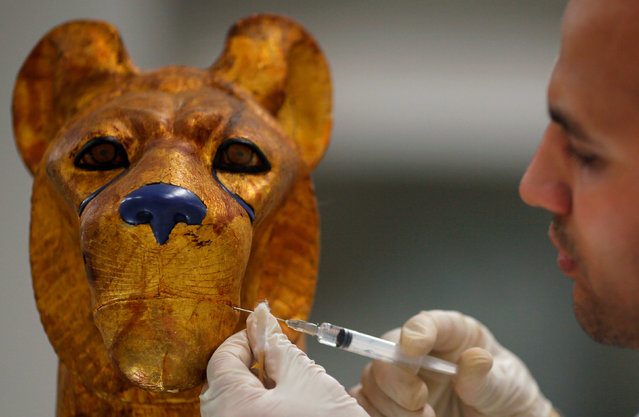 An Egyptian archaeological technician uses chemical injection to renovate a pharaonic bed with animal figures which belonged to The Golden King Tutankhamun, in the conservation centre of the Grand Egyptian Museum, on the outskirts of Cairo, Egypt January 30, 2018. Picture taken January 30, 2018. (Photo by Amr Abdallah Dalsh/Reuters) 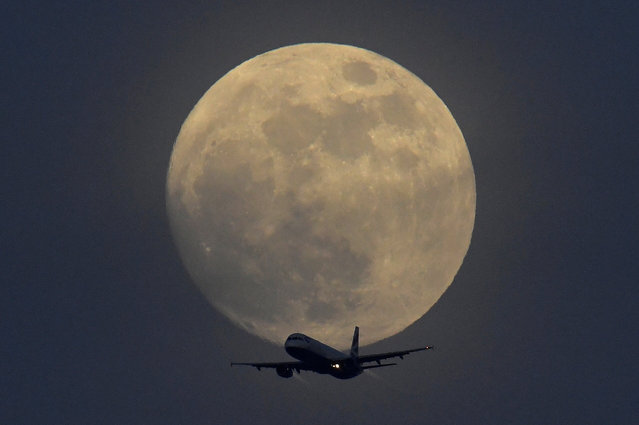 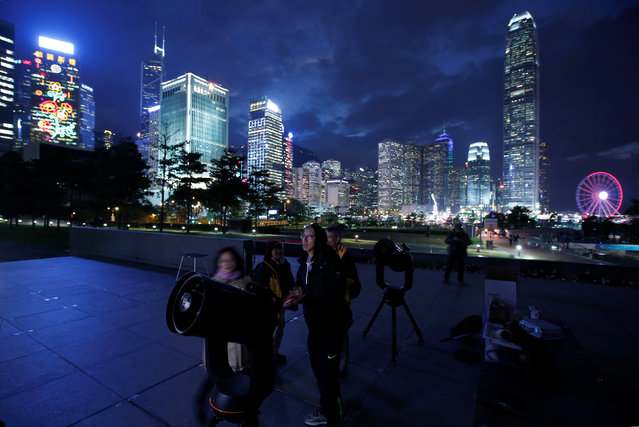 People set up telescopes in front of the financial Central district for the super blue moon and eclipse in Hong Kong on January 31, 2018. (Photo by Bobby Yip/Reuters) 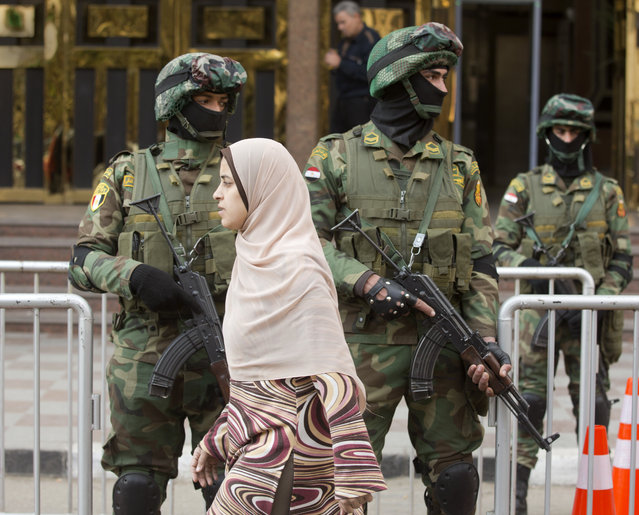 A girl walks past special forces soldiers as they take positions in front of the National Election Authority, which is in charge of supervising the 2018 presidential election, in Cairo, Egypt, Monday, January 29, 2018. (Photo by Amr Nabil/AP Photo) 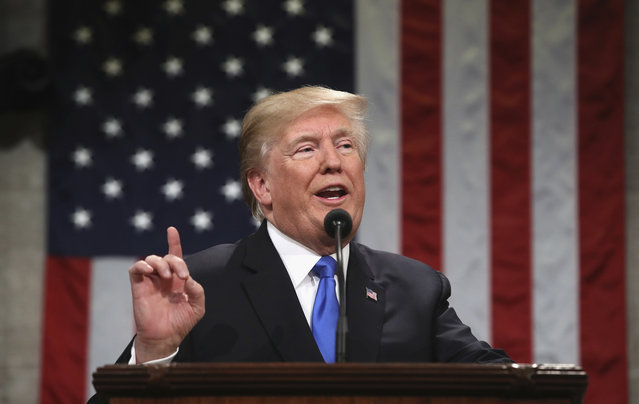 President Donald Trump delivers his first State of the Union address in the House chamber of the U.S. Capitol to a joint session of Congress Tuesday, January 30, 2018 in Washington. (Photo by Win McNamee/Pool via AP Photo) 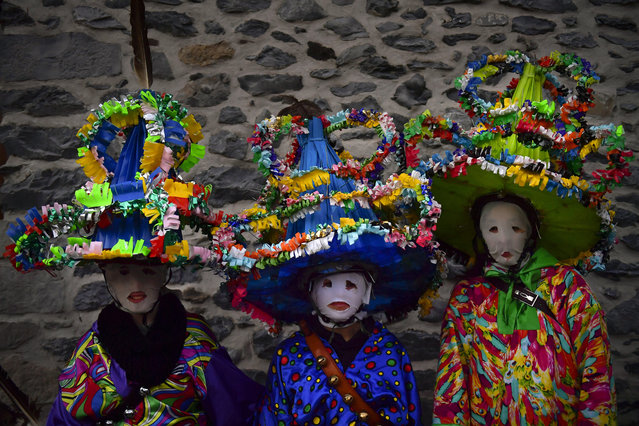 A group of participants dressed in traditional clothes and wearing large hats decorated with ribbons and feathers, known as '“Ttutturo”', take part in the Carnival of the Pyrenees villages of Leitza, northern Spain, Tuesday, January 30, 2018. (Photo by Alvaro Barrientos/AP Photo) 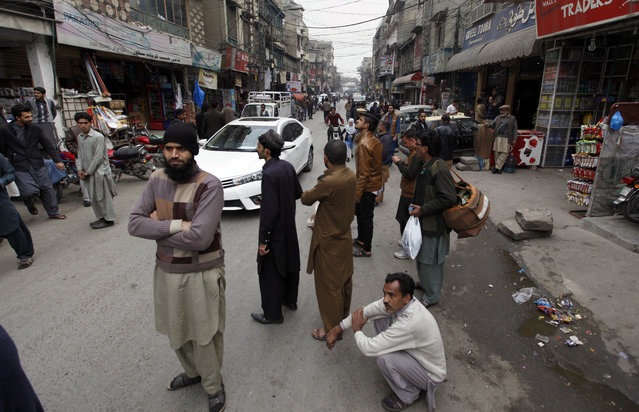 People stand outside their shops after a severe earthquake is felt in Rawalpindi, Pakistan, Wednesday, January 31, 2018. A strong magnitude 6.1 earthquake rattled Pakistan and Afghanistan, including the capital cities of both countries, on Wednesday, killing a young girl and injuring five others and damaging mud-brick homes in southwestern Pakistan, officials said. (Photo by Anjum Naveed/AP Photo) 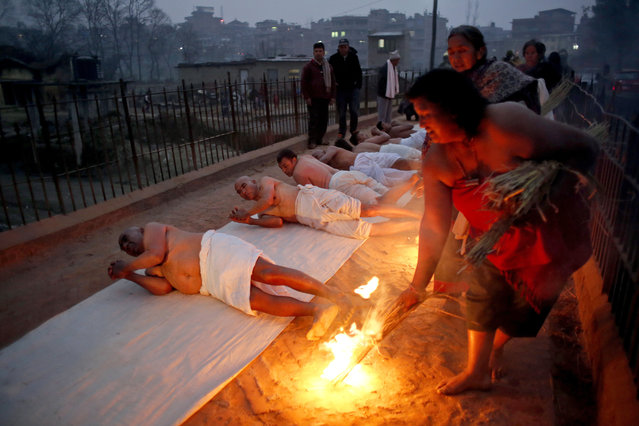 Nepalese Hindu devotees roll on the ground on the banks of Hanumante River on the last day of Madhav Narayan festival in Bhaktapur, Nepal, Wednesday, January 31, 2018. During the festival, devotees recite holy scriptures dedicated to Hindu goddess Swasthani and Lord Shiva. Unmarried women pray to get a good husband while those married pray for the longevity of their husbands by observing a month-long fast. (Photo by Niranjan Shrestha/AP Photo)
Edit Del
01 Feb 2018 08:52:00, post received 0 comments
Publication archive:
←   →
Popular tags:
All tags
Last searches: