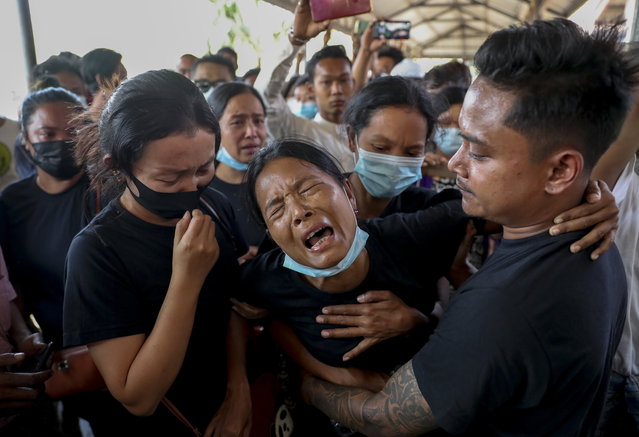 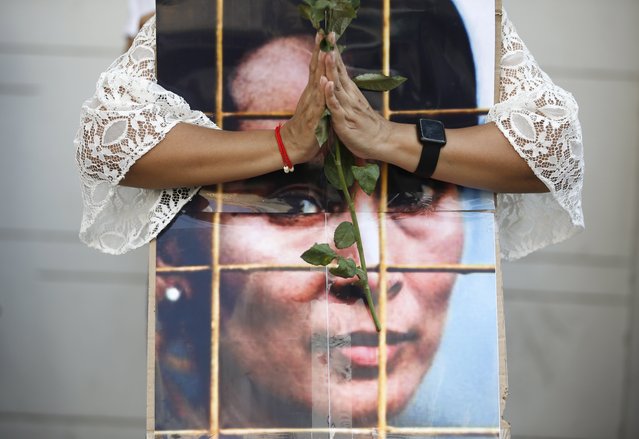 A Myanmar woman living in Thailand holds a rose as she prays for coup ousted detained leader Aung San Suu Kyi during a protest against Indonesian government's alleged support to the junta, at the Indonesian embassy in Bangkok, Thailand, 23 February 2021. Anti-coup protesters gathered to protest following media reports suggesting that Indonesian government is supporting a plan to send observers to Myanmar to ensure that military coup leaders will hold new elections, while protesters are rejecting the suggested plan and want the ousted government to be restored. Myanmar's Aung San Suu Kyi and other top political leaders have been detained after a raid in a military coup due to a tension rising between civilian government and the military disputed from the November 2020 elections results. (Photo by Rungroj Yongrit/EPA/EFE) 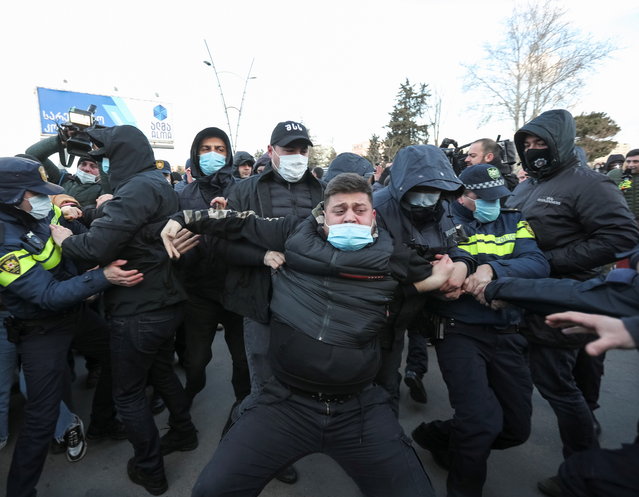 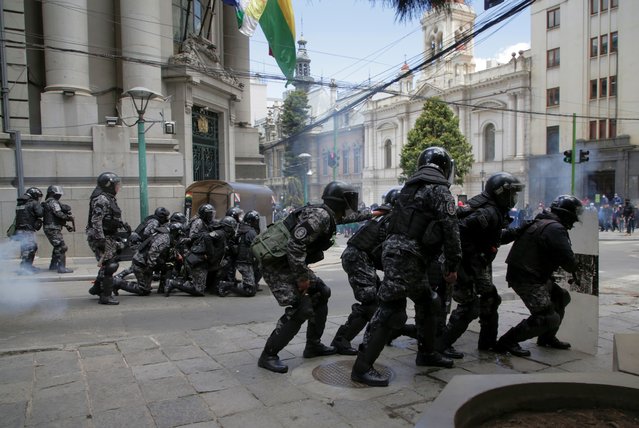 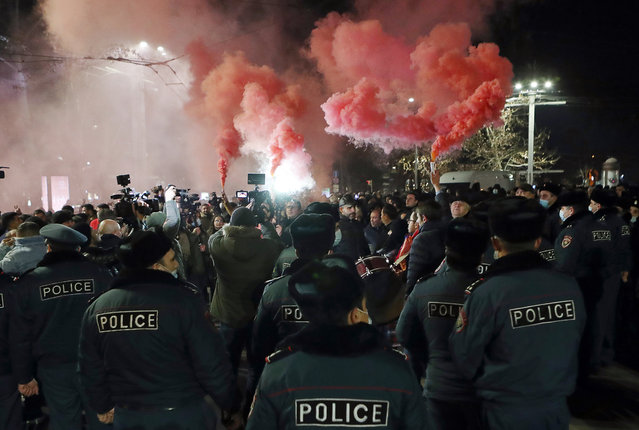 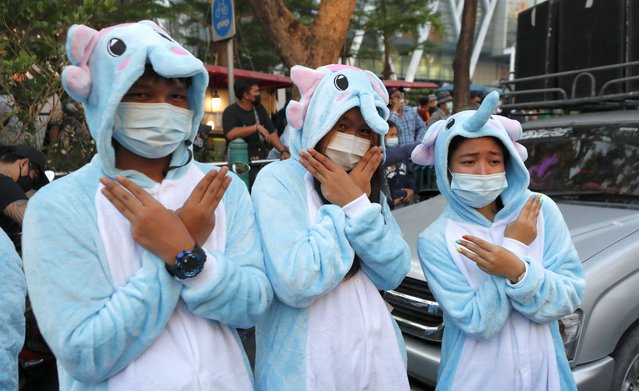 Pro-democracy protesters wearing elephant custom raise a three-finger salute, a symbol of resistance during protest in Bangkok, Thailand, Tuesday, February 23, 2021. Protesters gathered to call for fairness for low-ranking police after the opposition parties accused PM Prayuth Chan-ocha and deputy PM Prawith Wongsuwan of promoting a culture of patronage and bypassing the normal system inside the police forces during the parliament's censure debate last week. (Photo by Sakchai Lalit/AP Photo) 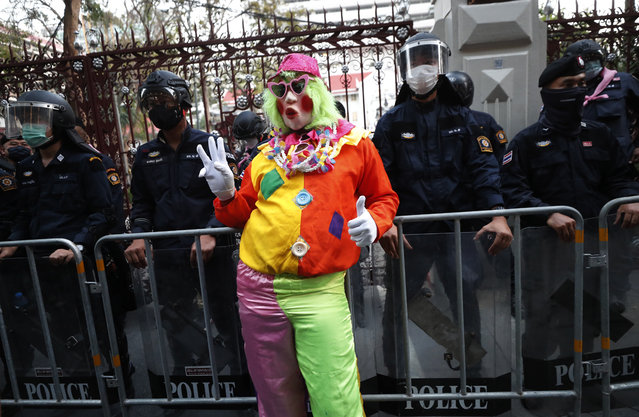 A pro-democracy protester wearing a clown clothing raises a three-finger salute, a symbol of resistance, in front of riot police at Police Headquarter in Bangkok, Thailand, Tuesday, February 23, 2021. (Photo by Sakchai Lalit/AP Photo) 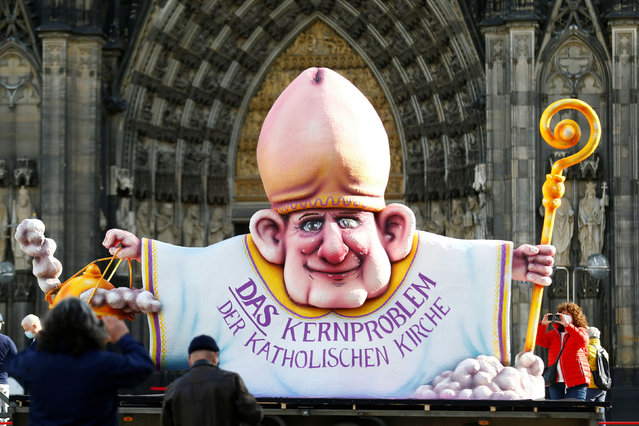 A carnival float showing an unnamed bishop from the 2021 “Rosenmontag” (Rose Monday) parade of Duesseldorf is placed in front of the Cologne Cathedral by activists of the Giordano Bruno Foundation to protest against sеxual abuse by Catholic priests at the beginning of a three-day virtual meeting of Germany's Bishops' Conference in Cologne, Germany, February 23, 2021. (Photo by Thilo Schmuelgen/Reuters) 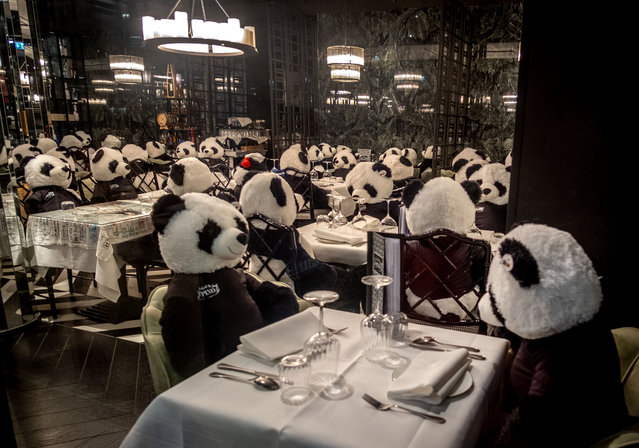 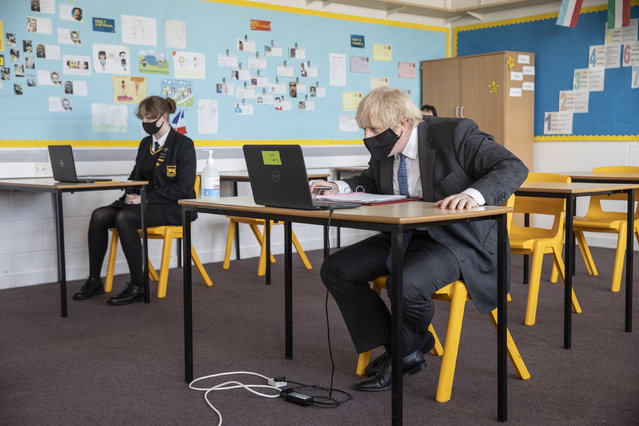 Britain's Prime Minister Boris Johnson takes part in an online class, during a visit to Sedgehill School in Lewisham, south east London, Tuesday, February 23, 2021, to see preparations for students returning to school. Johnson has announced a gradual easing of one of Europe’s strictest lockdowns on, saying children will return to class and people will be able to meet a friend for coffee in a park in two weeks’ time. But people longing for a haircut, a restaurant meal or a pint in a pub have almost two months to wait, and people won’t be able to hug loved ones that they don’t live with until May at the earliest. (Photo by Jack Hill/Pool Photo via AP Photo) 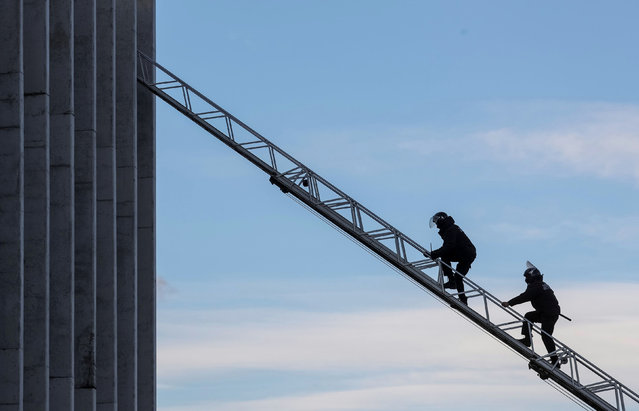 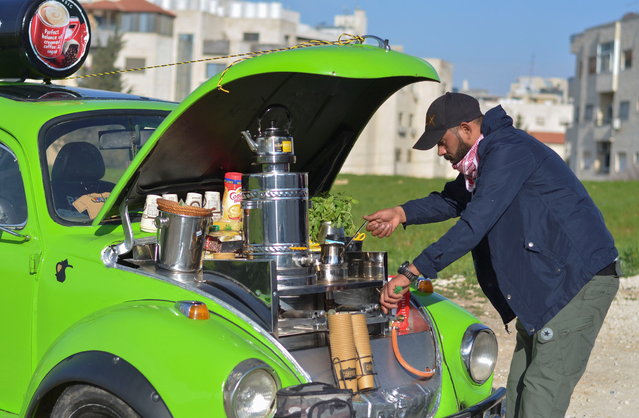 Fadi Ahmad, 33, prepares hot drinks for sale out of his Volkswagen Beetle, in Amman, Jordan February 16, 2021. (Photo by Muath Freij/Reuters) 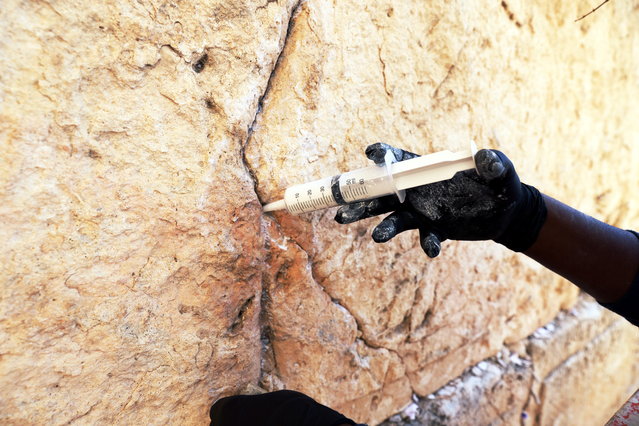 A labourer injects a type of grout into the gaps and fissures in the stones of the Western Wall, Judaism's holiest prayer site, as part of the Israel Antiquities Authority treatment of the ancient stones, in Jerusalem's Old City on February 23, 2021. (Photo by Ronen Zvulun/Reuters) 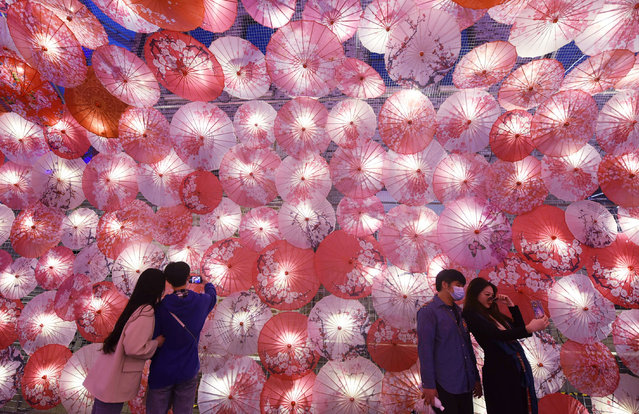 Thousands of “Umbrella Lantern” are seen along the streets in Hangzhou City, east China's Zhejiang Province, 22 February 2021. The installation is set up for the upcoming Spring Lantern Festival. (Photo by Rex Features/Shutterstock) 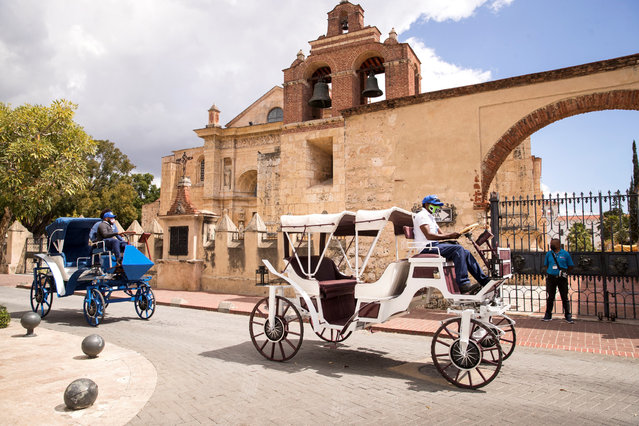 Cars powered by electricity circulate through the colonial zone in Santo Domingo, Dominican Republic, 23 February 2021. The Dominican authorities have transformed the old horse carriages that circulated in the Colonial Zone so that they are now powered with electricity, as part of the efforts in favor of sustainability and animal protection, which were presented this Tuesday in Santo Domingo. (Photo by Orlando Barria/EPA/EFE) 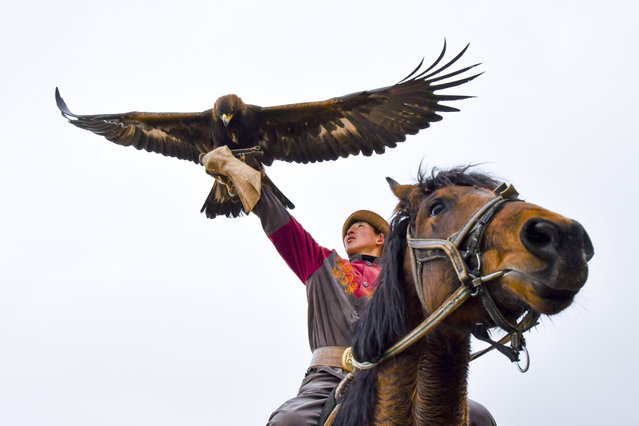 A Kyrgyz man holds a golden eagle for an eagle hunt riding a horse during the hunting festival “Salburun” in Tuura-Suu, a small village nestled among the mountains, about 250 km. (156 miles) south-east of Bishkek, Kyrgyzstan, Tuesday, February 23, 2021. Salburun comes from the nomadic tradition of hunting and protecting herds from predators such as wolves. (Photo by Vladimir Voronin/AP Photo) 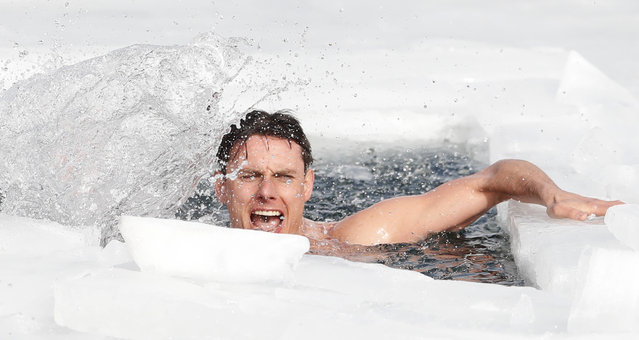 Freediver David Vencl reacts after setting a new world record in men's swimming under ice near Teplice, Czech Republic, Tuesday, February 23, 2021. Vencl swam the longest distance of 80.9 meters (265 ft) on Tuesday with breath held only in his swimsuit and swim goggles. In this category, freedivers cannot use any fin, diving suit, cap and weights. (Photo by Petr David Josek/AP Photo) 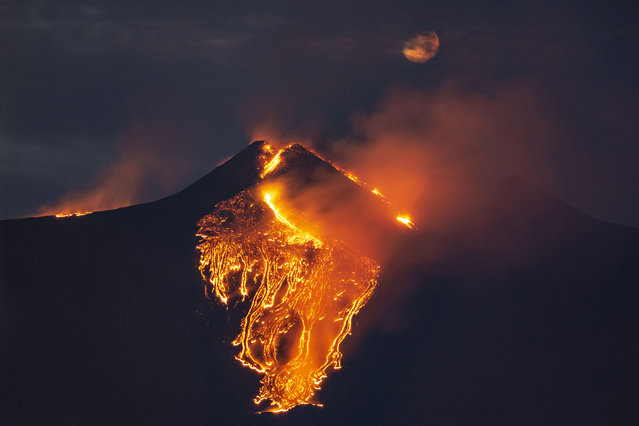 The moon is partially seen in the sky as lava flows from the Mt Etna volcano, near Catania in Sicily, southern Italy, early Tuesday, February 23 , 2021. The explosion started before midnight on Monday night, provoking a huge eruption plume that rose for several kilometers from the top of Etna, as reported by The National Institute of Geophysics and Volcanology, Etneo Observatory. (Photo by Salvatore Allegra/AP Photo) 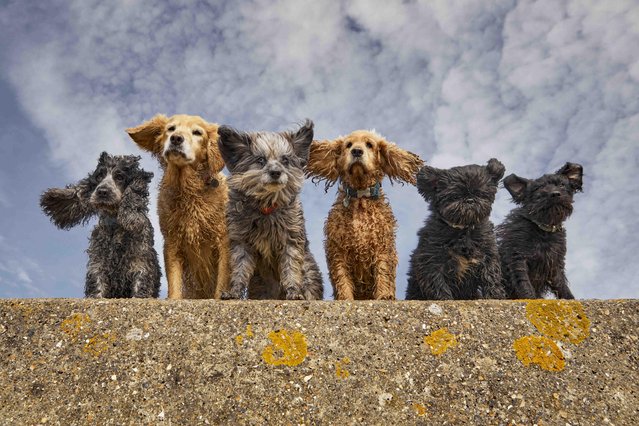