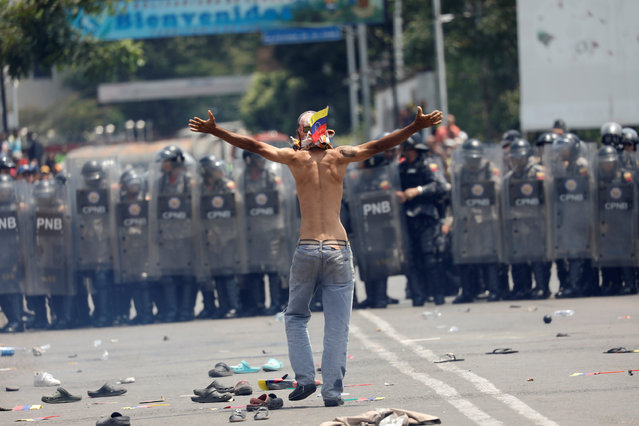 A Venezuelan opposition demonstrator gestures towards Venezuela's security forces at Simon Bolivar bridge on the border line between Colombia and Venezuela as seen from Cucuta, Colombia February 23, 2019. (Photo by Edgard Garrido/Reuters) 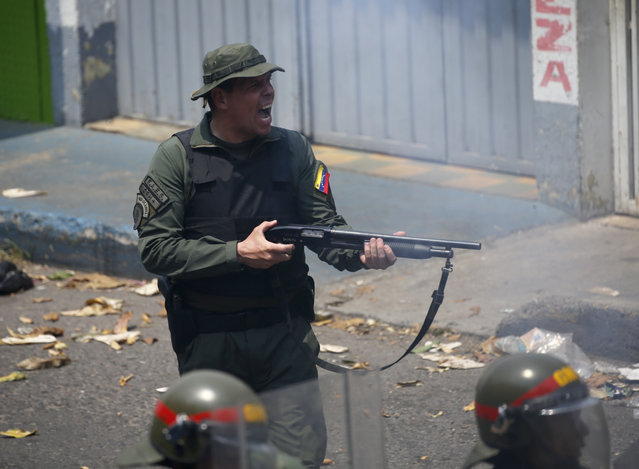 An officer of the Bolivarian National Guard fires his shotgun during clashes in Urena, Venezuela, near the border with Colombia, Saturday, February 23, 2019. Venezuela's National Guard fired tear gas on residents clearing a barricaded border bridge between Venezuela and Colombia on Saturday, heightening tensions over blocked humanitarian aid that opposition leader Juan Guaido has vowed to bring into the country over objections from President Nicolas Maduro. (Photo by Fernando Llano/AP Photo) 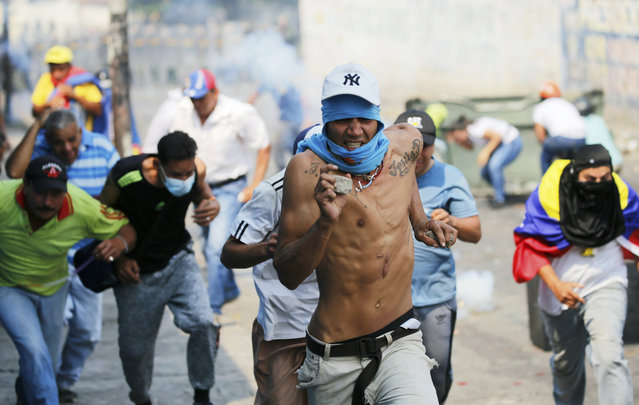 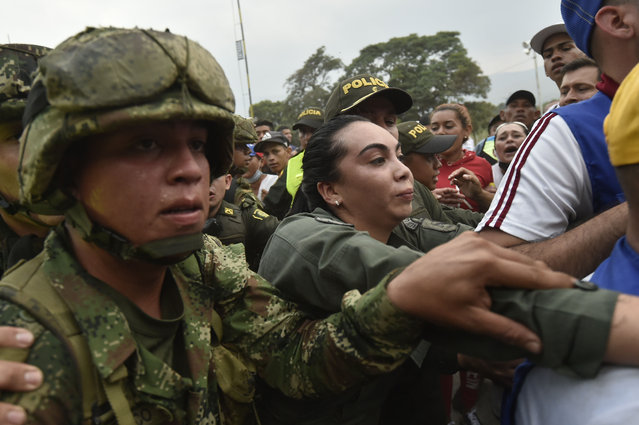 Colombian police officers escort a female member of Venezuela's Bolivarian National Armed Forces (FANB) (C) who deserted, near the Simon Bolivar international bridge in Cucuta, Colombia, on February 23, 2019. Venezuela braced for a showdown between the military and regime opponents at the Colombian border on Saturday, when self-declared acting president Juan Guaido has vowed humanitarian aid would enter his country despite a blockade. (Photo by Luis Robayo/AFP Photo) 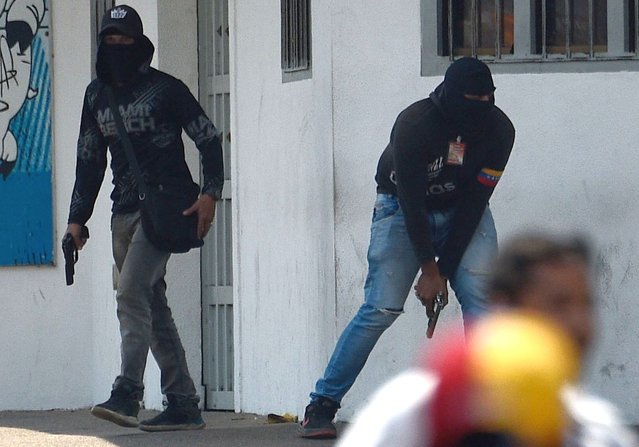 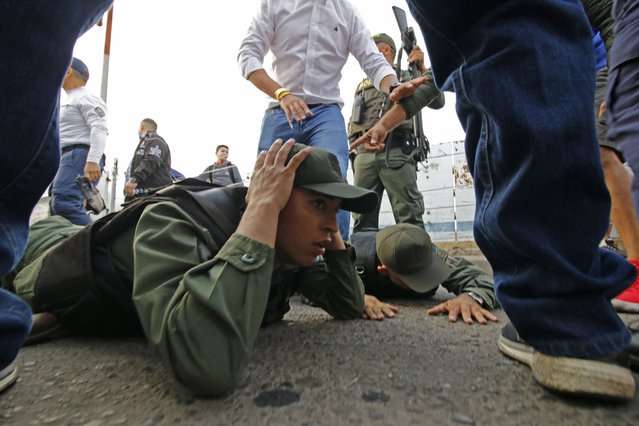 Two Venezuelan soldiers lie on the ground as they are detained by Colombian police after driving into Colombia in an armor car from the Venezuelan side of Simon Bolivar International bridge in Cucuta on February 23, 2019. According to Colombian authorities four soldiers of the Venezuelan guard deserted this Saturday after crossing two border bridges with Colombia, closed by order of the government of Nicol·s Maduro before the announcement of the entry of aid shipments. Three of the soldiers were mobilized in a white tank and knocked down one of the security fences of the Simon BolÌvar Bridge, in the Colombian city of Cucuta, said a Colombian Immigration officer (Photo by Schneyder Mendoza/AFP Photo) 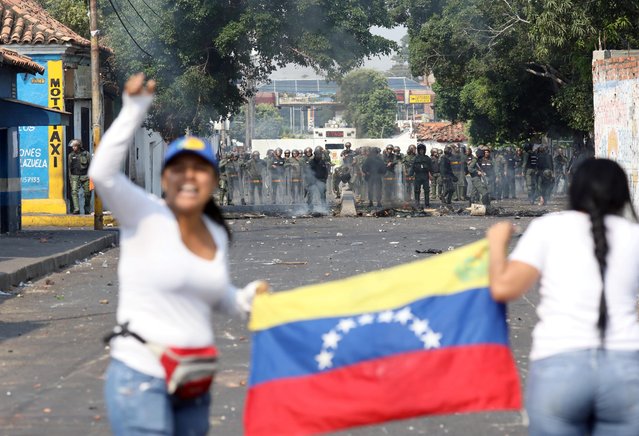 Security forces take position while clashing with demonstrators in Urena, Venezuela, February 23, 2019. A truck loaded with humanitarian aid was set ablaze on Saturday on the Colombia-Venezuela border, an opposition deputy told reporters amid rioting on the Santander bridge crossing. (Photo by Andres Martinez Casares/Reuters) 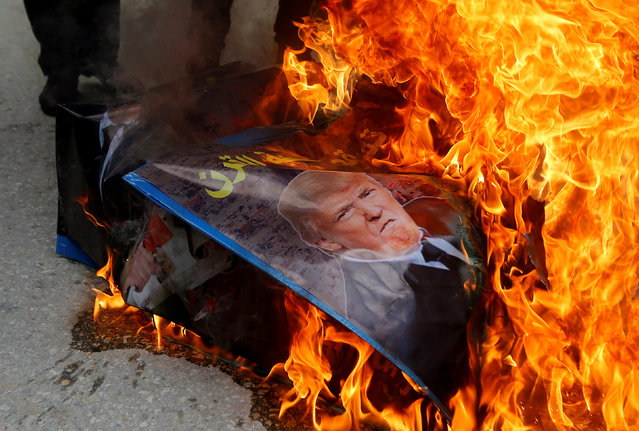 Palestinian demonstrators burn a poster depicting U.S. President Donald Trump during a protest calling for opening Shuhada Street that Israel unilaterally closed it in 1994, in Hebron, in the Israeli-occupied West Bank February 22, 2019. (Photo by Mussa Qawasma/Reuters) 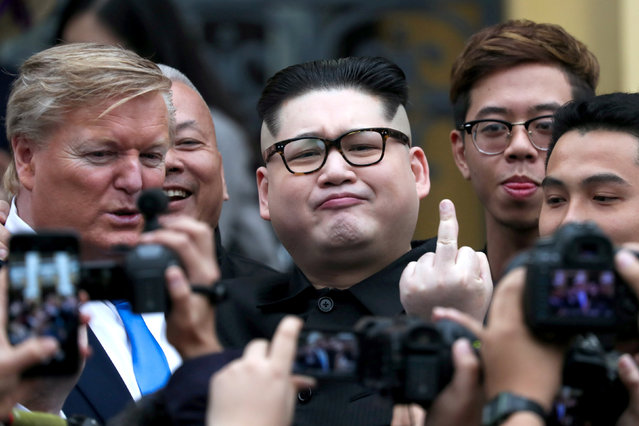 Howard X, an Australian-Chinese impersonator of North Korean leader Kim Jong Un and Russell White, who is impersonating U.S. President Donald Trump, pose for a photo outside the Opera House, ahead of the upcoming Trump-Kim summit in Hanoi, Vietnam, February 22, 2019. (Photo by Athit Perawongmetha/Reuters) 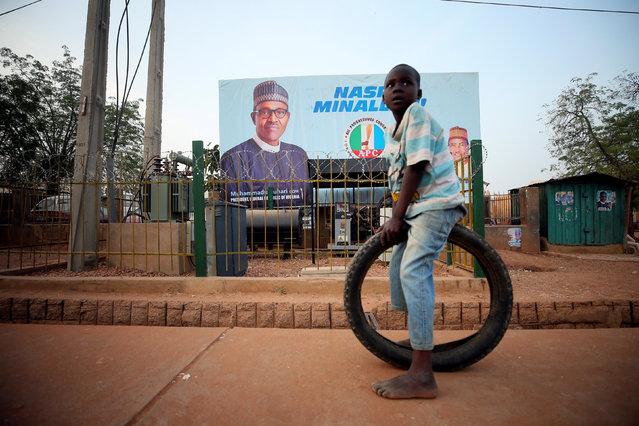 A boy sits on a tyre in front of a billboard on the eve of Nigeria's 2019 presidential election in Daura, Katsina State, Nigeria February 22, 2019. (Photo by Afolabi Sotunde/Reuters) 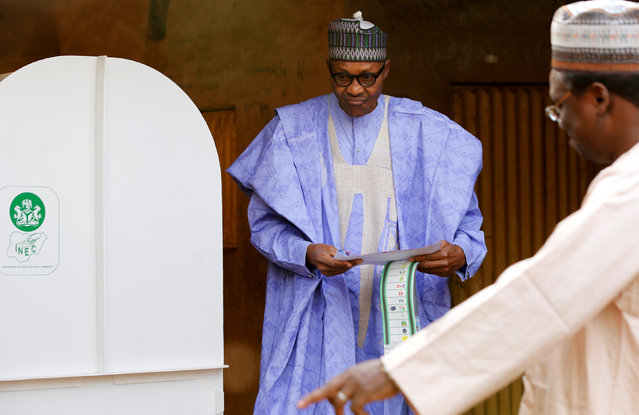 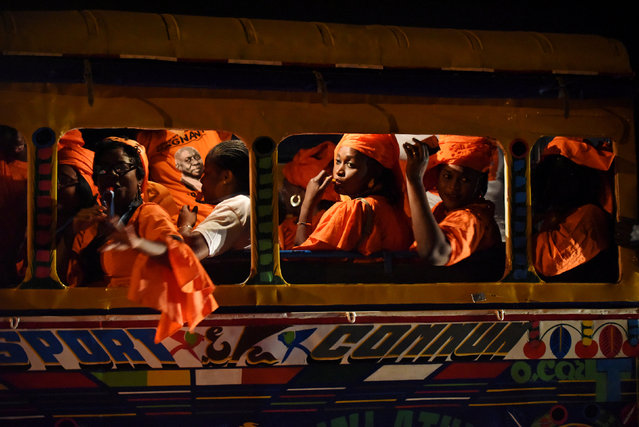 Supporters of Idrissa Seck, presidential candidate of the coalition “Idy 2019”, are seen in a “car rapide” before his final rally campaign in Dakar, Senegal February 22, 2019. (Photo by Sylvain Cherkaoui/Reuters) 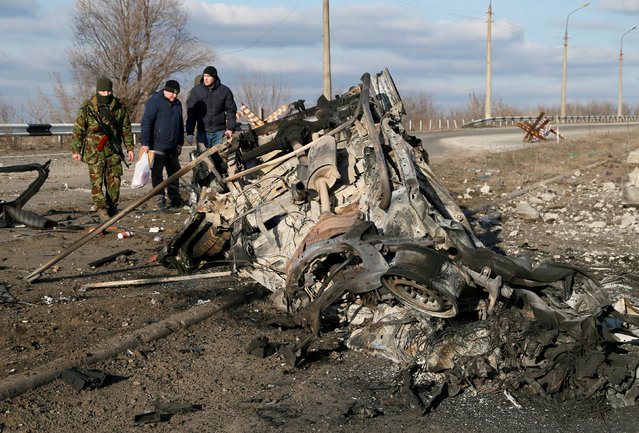 A view shows the wreckage of a minibus, which was destroyed by a landmine after swerving off road near the village of Yelenovka outside Donetsk, Ukraine on February 23, 2019. (Photo by Alexander Ermochenko/Reuters) 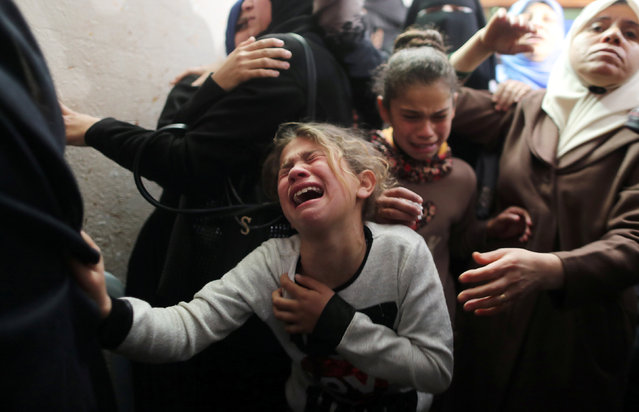 A relative of Palestinian teenager Yousif al-Dayyah, 15, who was killed at the Israel-Gaza border fence during a protest on Friday, mourns during his funeral in Gaza City February 23, 2019. (Photo by Suhaib Salem/Reuters) 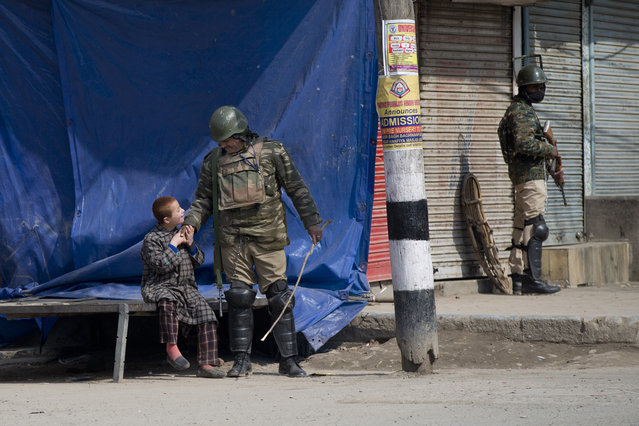 An Indian paramilitary soldier plays with a Kashmiri child as he stands guard during security lockdown in Srinagar, Indian controlled Kashmir, Sunday, Februaary 24, 2019. Shops and businesses have closed in Kashmir to protest a sweeping crackdown against activists seeking the end of Indian rule in the disputed region. (Photo by Dar Yasin/AP Photo) 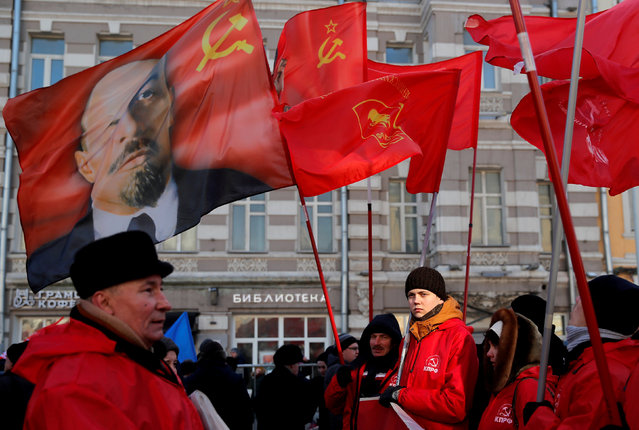 Activists and supporters of the Russian Communist Party gather before a procession to celebrate the Defender of the Fatherland Day, which was before known as Soviet Army and Navy Day, in Moscow, Russia February 23, 2019. (Photo by Maxim Shemetov/Reuters) 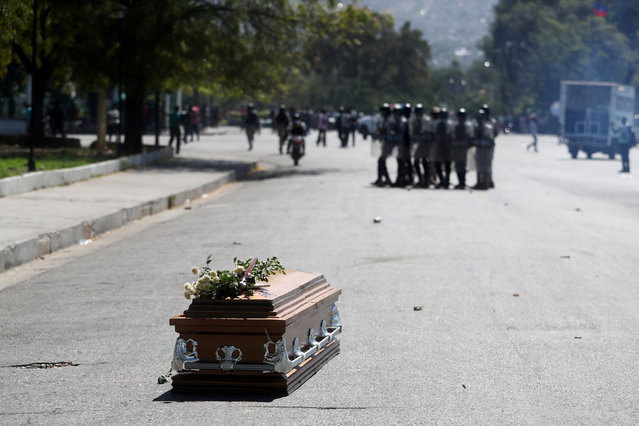 The casket of a man shot dead during anti-government protests lies on the ground as riot police release tear gas to disperse locals residents in Port-au-Prince, Haiti, February 22, 2019. (Photo by Ivan Alvarado/Reuters) 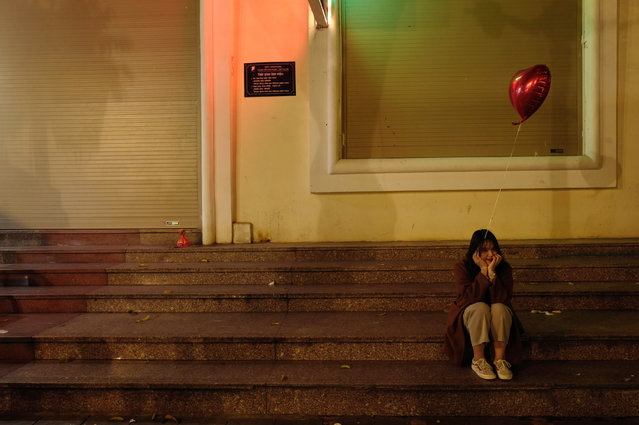 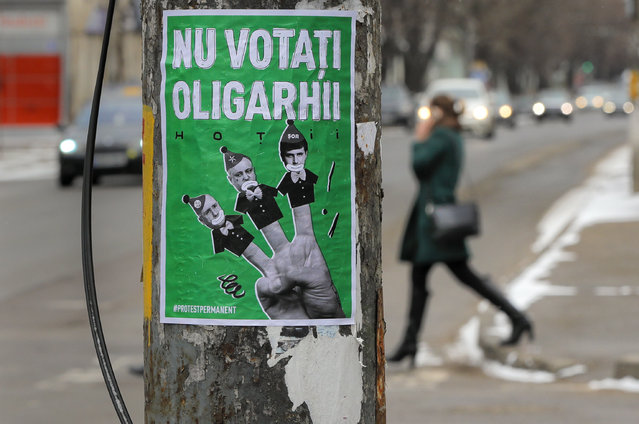 A poster depicting, from left, Moldova's Prime Minister Pavel Filip, President Igor Dodon and Israeli born Modovan businessman and politician Ilan Shor, which reads “Don't Vote for the Oligarchs” is placed on a light pole in Chisinau, Moldova, Saturday, February 23, 2019, a day before the country holds parliamentary elections. More than three million Moldovans will vote in a parliamentary elections Sunday in this former Soviet republic wedged between Romania and Ukraine choosing representatives for the 101-seat legislature for a four-year term. (Photo by Vadim Ghirda/AP Photo) 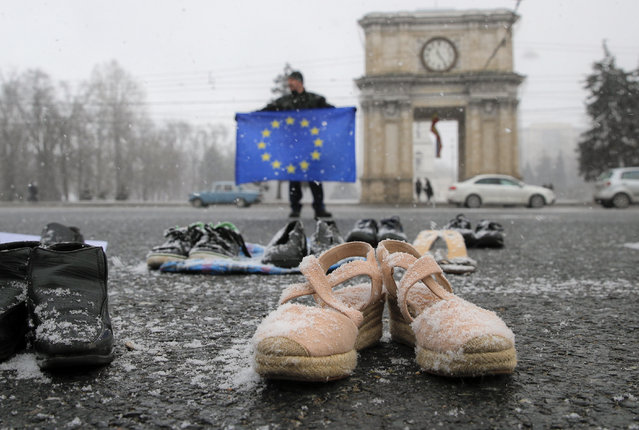 A man holds a European Union flag as people stand by shoes of Moldovan citizens working abroad are placed on the pavement in Chisinau, Moldova, Saturday, February 23, 2019. Moldovans who have relatives working abroad staged a protest by blaming the corruption and poor economic situation in the country for the massive numbers of people leaving the country in search of a better life. (Photo by Vadim Ghirda/AP Photo) 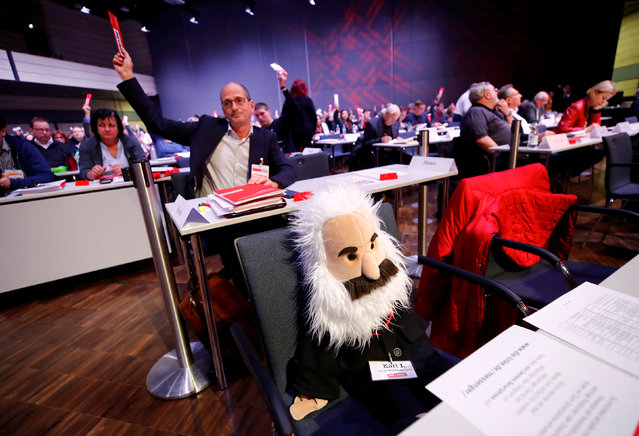 A Karl Marx puppet is placed on a seat while delegates of a three day party congress of Germany's left-wing party Die Linke vote in Bonn, Germany February 22, 2019. (Photo by Wolfgang Rattay/Reuters) 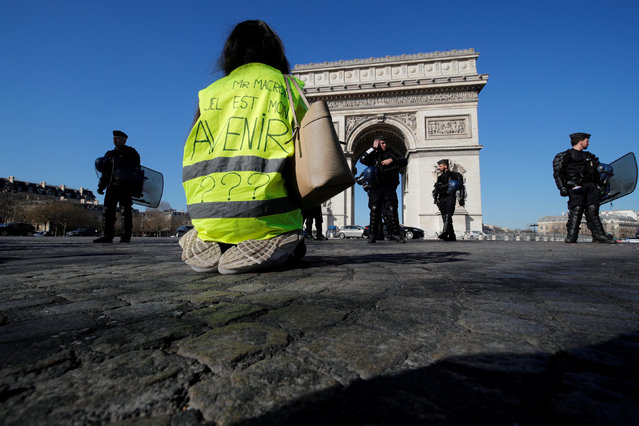 A protester wearing a yellow vest kneels on the Champs Elysees near the Arc de Triomphe during a demonstration by the “yellow vests” movement in Paris, France, February 23, 2019. Message reads, “Mr Macron, What is my Future”. (Photo by Philippe Wojazer/Reuters) 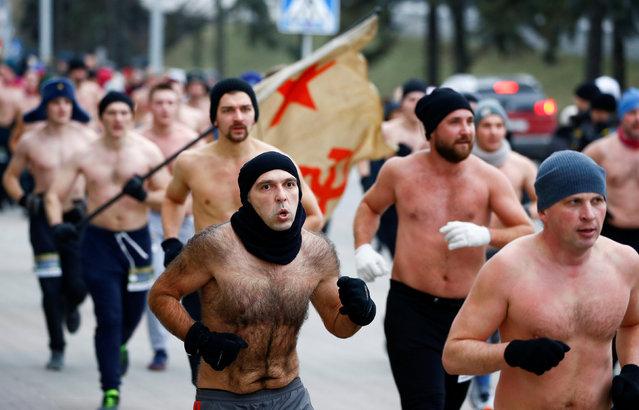 Men take part in “Real men's race” to mark the Defender of the Fatherland Day in Minsk, Belarus on February 23, 2019. (Photo by Vasily Fedosenko/Reuters) 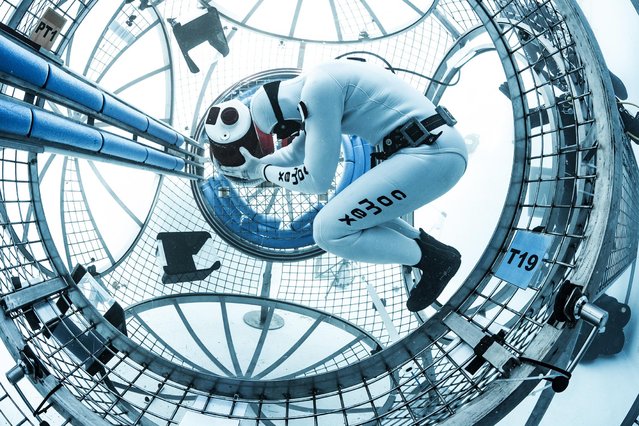 A diver and astronaut testing the Esprit module (developed by Comex and Airbus) of the Lunar Orbital Platform-Gateway (LOP-G) in the pools of Comex, on February 21, 2019 in Marseille, France. (Photo by Alexis Rosenfeld/Getty Images) 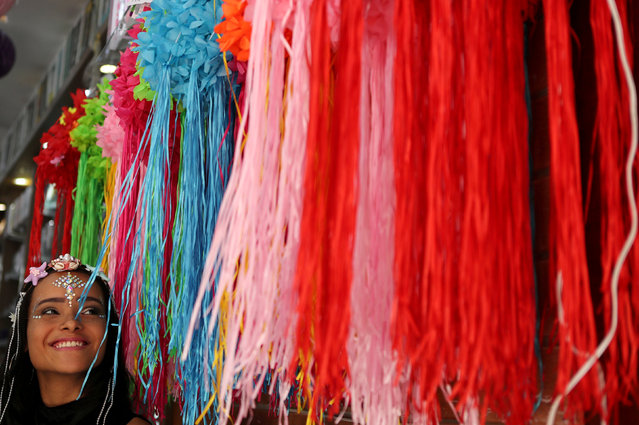 A vendor wears a costume at a street market ahead of Carnival festivities in Rio de Janeiro, Brazil February 22, 2019. (Photo by Sergio Moraes/Reuters) 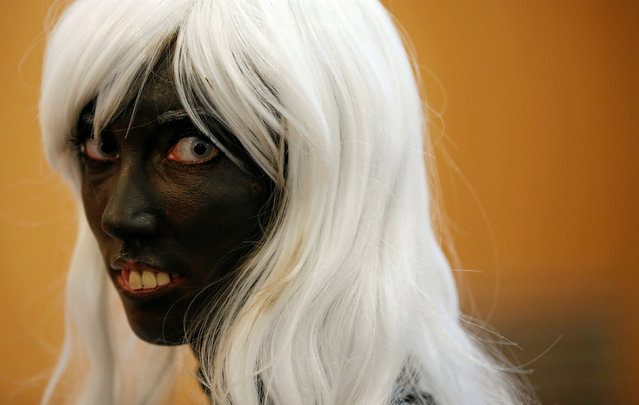