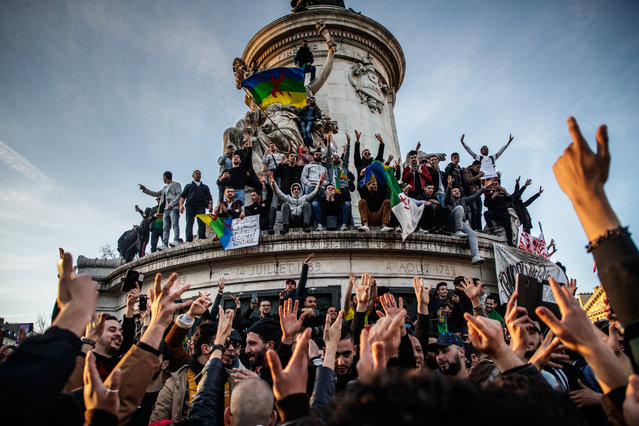 Protesters from the Franco-Algerian community gather at Republic square to protest against the fifth term of Algerian President, Abdelaziz Bouteflika in Paris, France, 24 February 2019. Abdelaziz Bouteflika, has been serving as the president since 1999, has announced on 19 February he will be running for a fifth term in presidential elections scheduled for 18 April 2019. (Photo by Christophe Petit-Tesson/EPA/EFE) 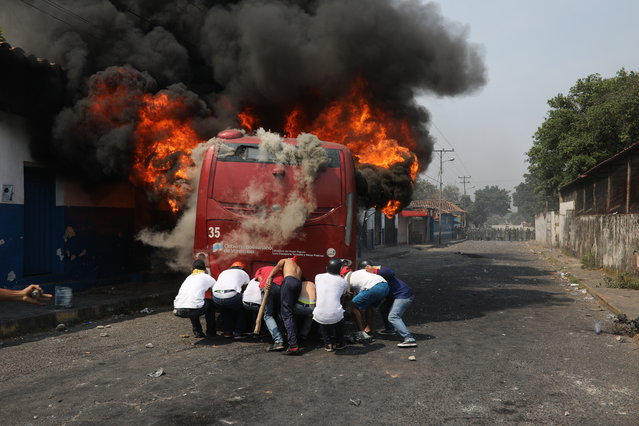 Demonstrators push a bus that was torched during clashes with the Bolivarian National Guard in Urena, Venezuela, near the border with Colombia, Saturday, February 23, 2019. Venezuela's National Guard fired tear gas on residents clearing a barricaded border bridge between Venezuela and Colombia on Saturday, heightening tensions over blocked humanitarian aid that opposition leader Juan Guaido has vowed to bring into the country over objections from President Nicolas Maduro. (Photo by Rodrigo Abd/AP Photo) 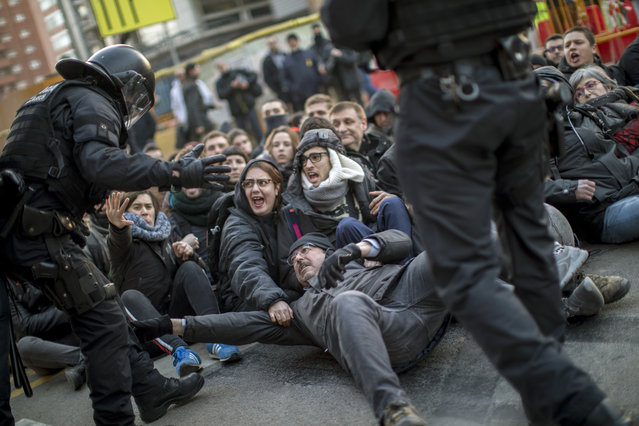 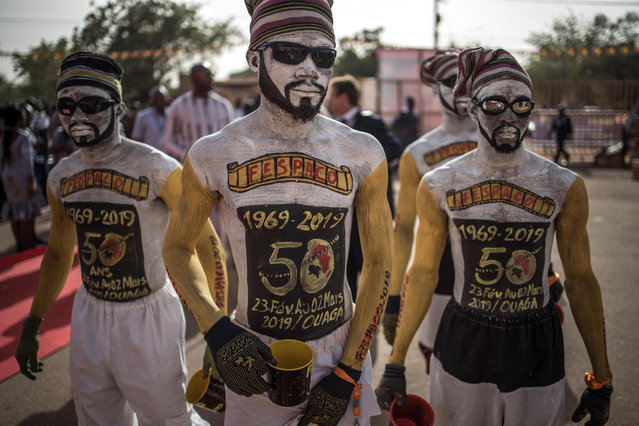 Performers arrive to the entrance of the venue where the opening ceremony of the FESPACO Panafrican Film and Television Festival of Ouagadougou is about to start, on February 23, 2019. Africa's biggest film festival marks its 50th anniversary, buoyed by its contributions to the continent's cinema industry but overshadowed by security problems in host country Burkina Faso. (Photo by Marco Longari/AFP Photo) 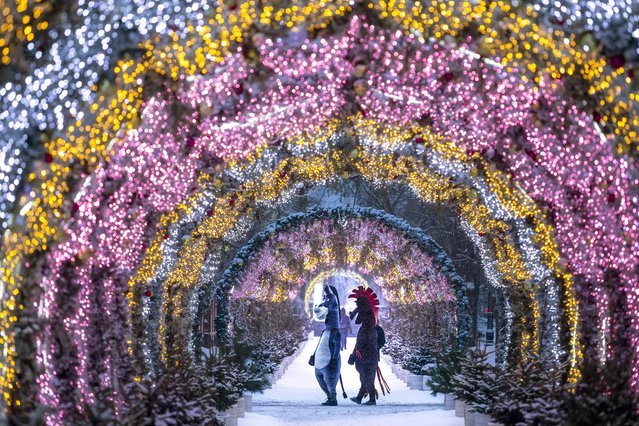 A reveller refreshes herself with a shower during the annual “Se Benze que da” block party, created by late councilwoman Marielle Franco, in the Mare slum in Rio de Janeiro, Brazil on February 23, 2019. (Photo by Pilar Olivares/Reuters) 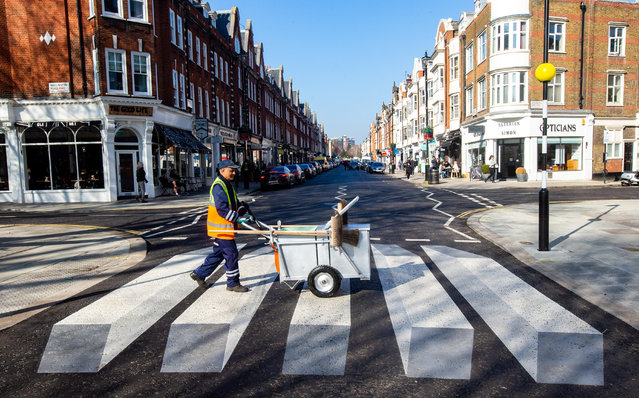 Westminster council has installed a 3D zebra crossing on St John’s Wood high street in an attempt to slow drivers down and improve pedestrian safety in London, England on February 24, 2019. (Photo by Tommy London/Alamy Live News) 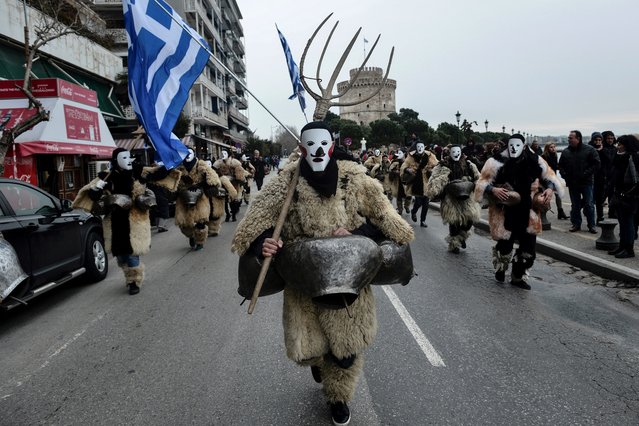 Members of bell bearer groups from Greece and Europe parade during the 5th edition of the European Bell Bearers Festival on February 24, 2019, in the northern Greek port city of Thessaloniki. The custom of the “Koudounoforoi” (bell bearers) is a folklore tradition residue of ancient rituals in honour of the God Dionysos, the Greek god associated with pleasure, festivity, wine and euphoria. They wear hand-made costumes of leather and fur and bells of different sizes. The noise of the bells is believed to be used to frighten the evil spirits and awaken nature to the coming of spring. (Photo by Sakis Mitrolidis/AFP Photo) 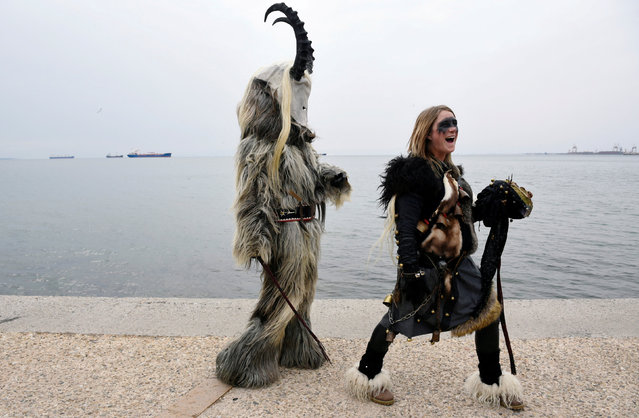 Participants parade during the 6th European Festival of Bell-bearing traditions in Thessaloniki, Greece on February 24, 2019. (Photo by Alexandros Avramidis/Reuters) 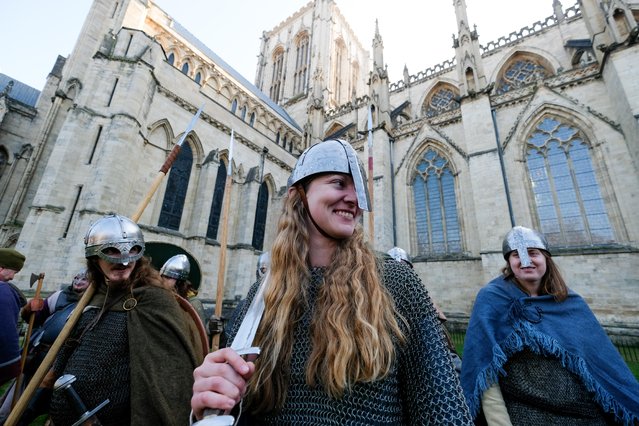 Viking re-enactors prepare to march through York City during the Jorvik Viking Festival on February 23, 2019 in York, England. The annual Jorvik Viking Festival held in York is recognised as the largest event of its kind in Europe. This year the festival remembers the role that the Viking women played during those turbulent times. The festival is a city-wide celebration of York's rich Norse heritage and commemorates a seminal moment in British history, the arrival and conquest of England by the Viking Army in AD 866. A programme of events such as living history encampments, walks, talks, tours and combat performances entertain and educate visitors to the festival. (Photo by Ian Forsyth/Getty Images) 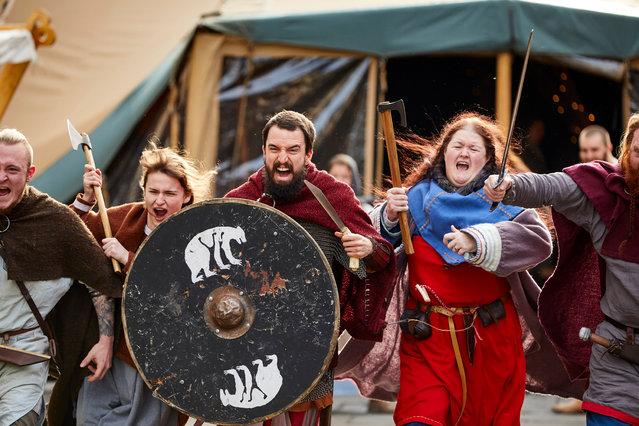 Viking re-enactors representing the rival armies of the Vikings and Anglo-Saxons skirmish near Clifford’s Tower during the Jorvik Viking Festival on February 23, 2019 in York, England. (Photo by Christopher Thomond/The Guardian) 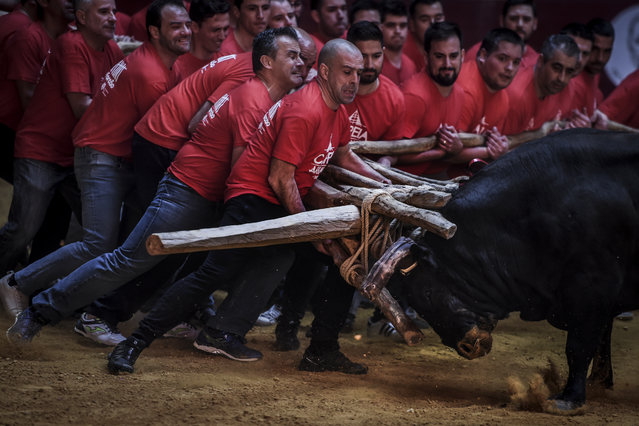 A group of men perform the bullfight of “Capeia Arraiana” during the Bullfighting Day at the Campo Pequeno bullfighting arena in Lisbon on February 23, 2019. (Photo by Patricia De Melo Moreira/AFP Photo) 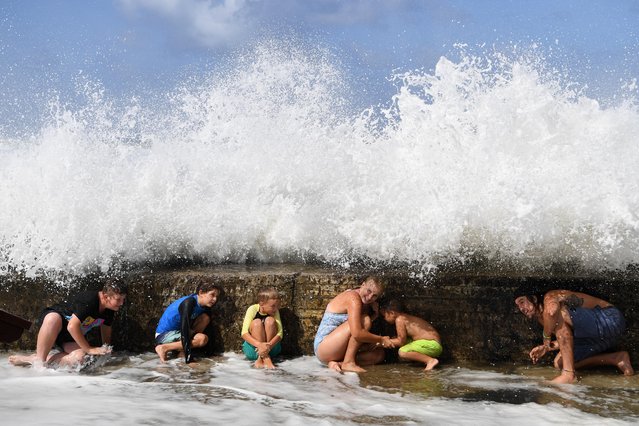 Locals shelter behind a sea wall as large waves generated by cyclone Oma crash onto it at Snapper Rocks on the Gold Coast, Queensland, Australia, 24 February 2019. Huge swells and high tides are pummeling south-east Queensland beaches as Cyclone Oma sits off the Queensland coast. According to the Australian Bureau of Meteorology, Cyclone Oma, now a subtropical cyclone, has changed direction away from Queensland, while strong winds and high waves will continue affecting the region. (Photo by Dan Peled/EPA/EFE) 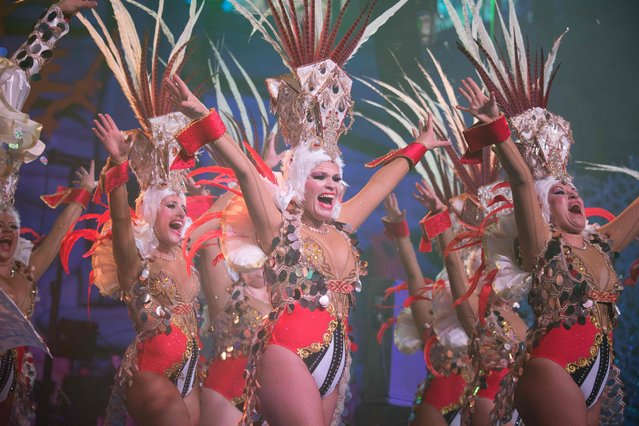 Dancers perform on the main stage in the Battle of the Troops contest during carnival celebrations in Santa Cruz de Tenerife, on the Spanish Canary island of Tenerife, on February 23, 2019. The over month-long event began on February 1st and finishes on March 10th with orchestras playing Caribbean and Brazilian rhythms throughout the festivities that range from the election of the Carnival Queen, the Junior Queen and the Senior Queen, children and adult murgas (satirical street bands), comparsas (dance groups) to performances on the streets. (Photo by Desiree Martin/AFP Photo) 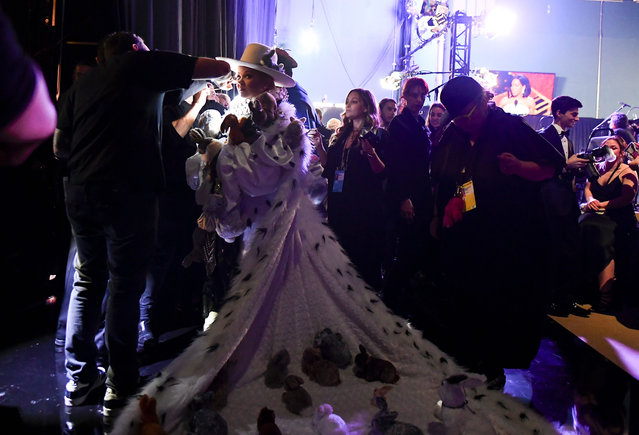 This handout photo released by A.M.P.A.S. shows actress Melissa McCarthy getting a make-up touch up backstage during the 91st Annual Academy Awards at the Dolby Theatre in Hollywood, California on February 24, 2019. (Photo by Matt Petit/A.M.P.A.S./AFP Photo) 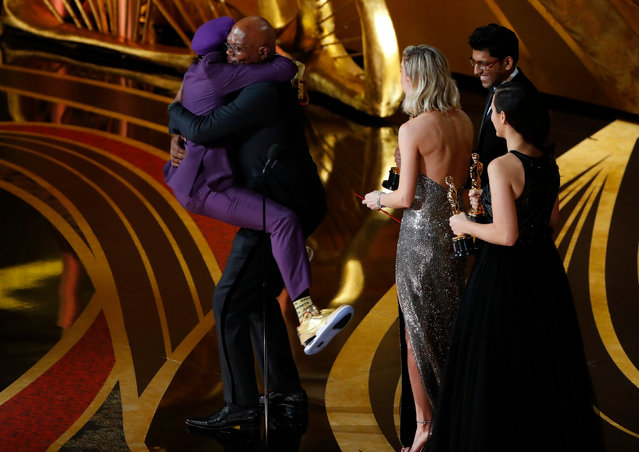 Spike Lee jumps into the arms of presenter Samuel L Jackson as he wins the best adapted screenplay award for BlacKkKlansman during the 91st Annual Academy Awards at Dolby Theatre on February 24, 2019 in Hollywood, California. (Photo by Mike Blake/Reuters) 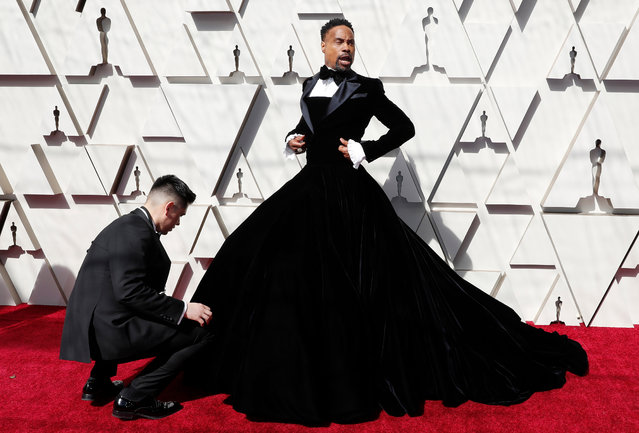 American stage performer Billy Porter arrives for the 91st annual Academy Awards ceremony at the Dolby Theatre in Hollywood, California, USA, 24 February 2019. The Oscars are presented for outstanding individual or collective efforts in 24 categories in filmmaking. (Photo by Etienne Laurent/EPA/EFE) 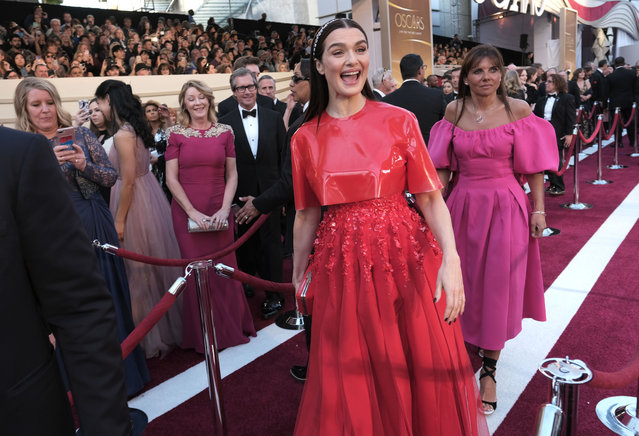 Rachel Weisz in a Givenchy dress attends the 91st Annual Academy Awards at Hollywood and Highland on February 24, 2019 in Hollywood, California. (Photo by Michael Buckner/Rex Features/Shutterstock) 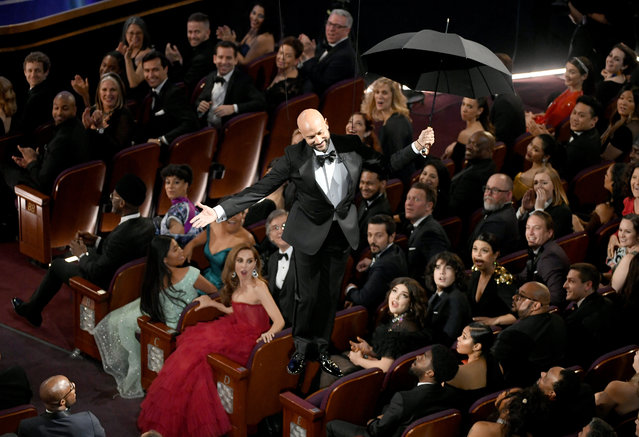 Keegan-Michael Key, one of several guests giving awards in the absence of a host, descends to the floor with an umbrella during the 91st Annual Academy Awards at Dolby Theatre on February 24, 2019 in Hollywood, California. (Photo by Kevin Winter/Getty Images)