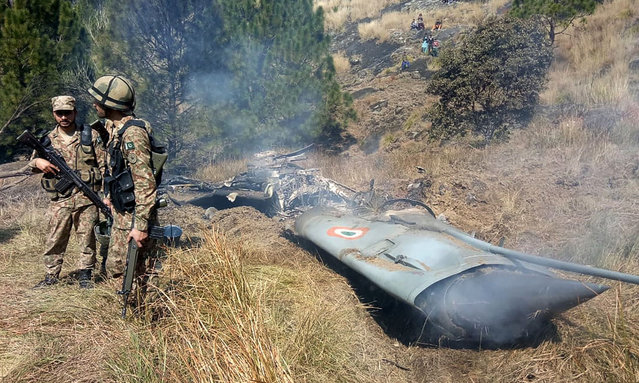 Pakistani soldiers stand next to what Pakistan says is the wreckage of an Indian fighter jet shot down in Pakistan controled Kashmir at Somani area in Bhimbar district near the Line of Control on February 27, 2019. Pakistan said on February 27 it shot down two Indian warplanes in its airspace over disputed Kashmir, in a dramatic escalation of a confrontation that has ignited fears of an all-out conflict between the nuclear-armed neighbours. (Photo by AFP Photo/Stringer) 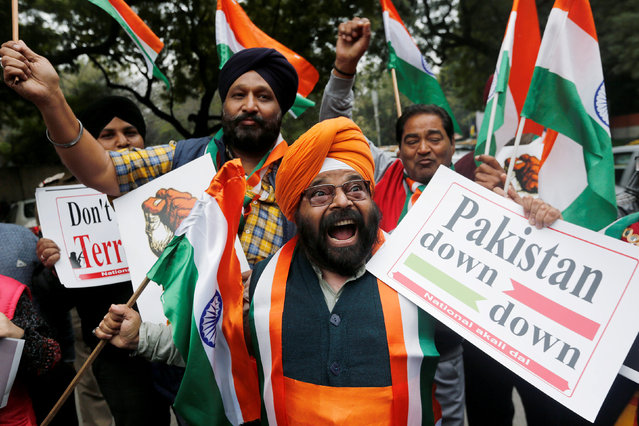 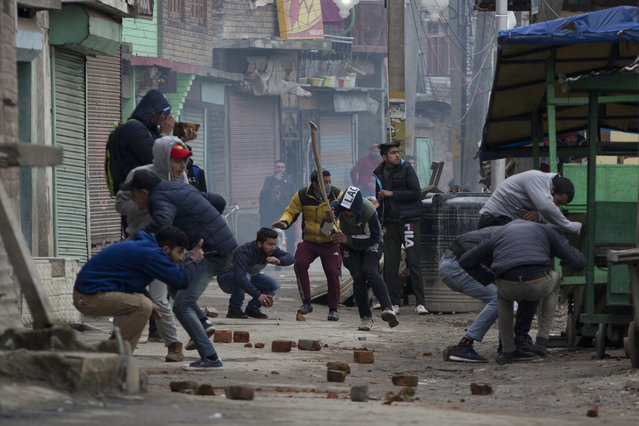 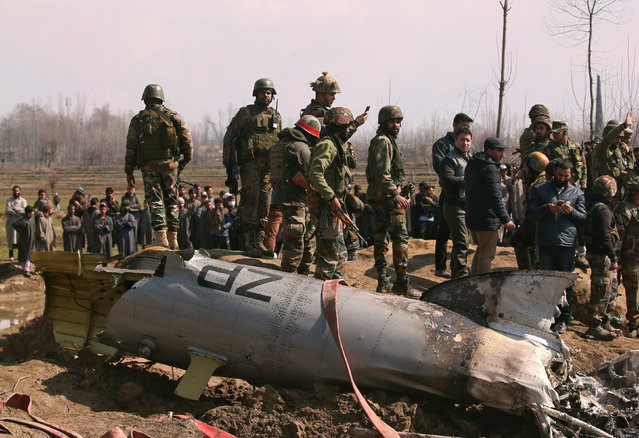 Indian soldiers stand next to the wreckage of an Indian Air Force helicopter after it crashed in Budgam district in Kashmir February 27, 2019. (Photo by Danish Ismail/Reuters) 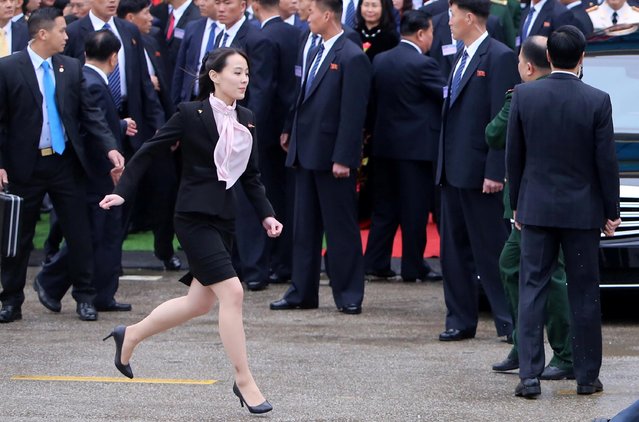 Kim Yo Jong, sister of Kim Jong Un, runs after they arrive at the border town of Dong Dang, Vietnam, February 26, 2019. (Photo by Reuters/Stringer) 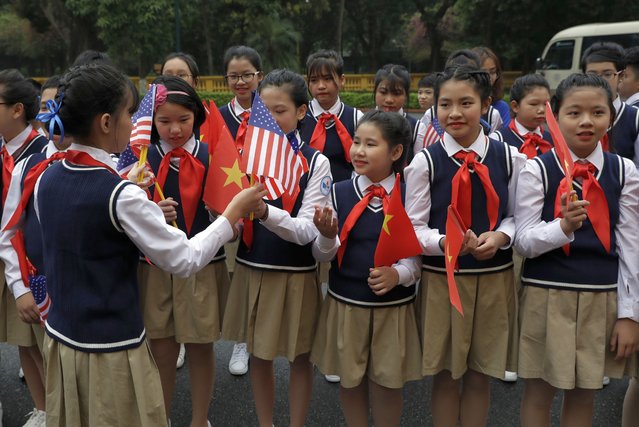 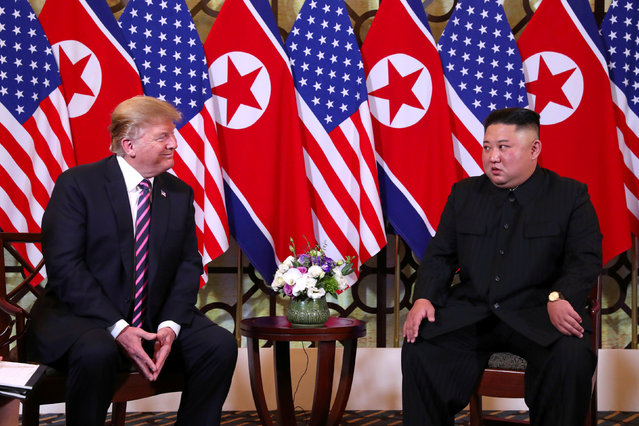 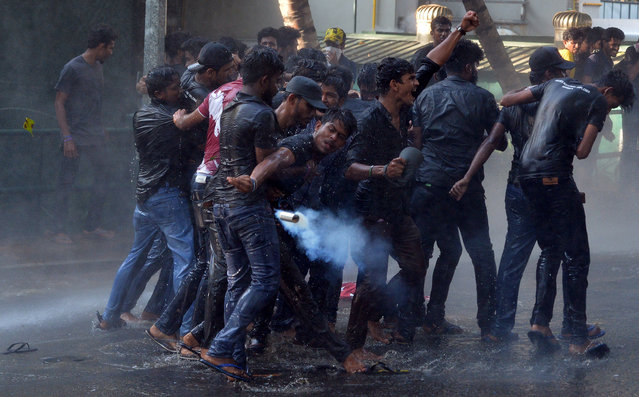 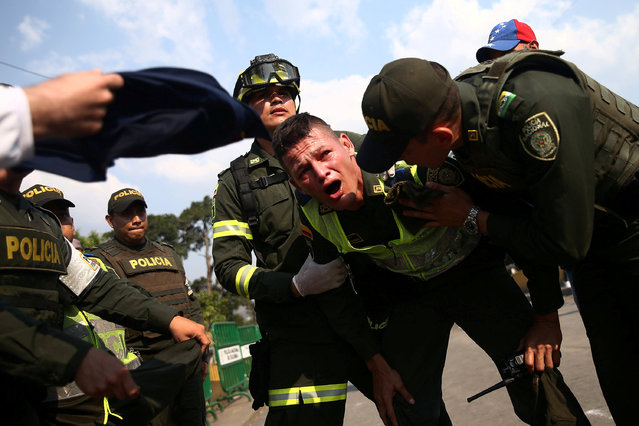 A Colombian police officer affected by tear gas reacts during clashing between opposition supporters and Venezuela's security forces at Simon Bolivar bridge on the border line between Colombia and Venezuela, as seen from Cucuta, Colombia, February 25, 2019. (Photo by Edgard Garrido/Reuters) 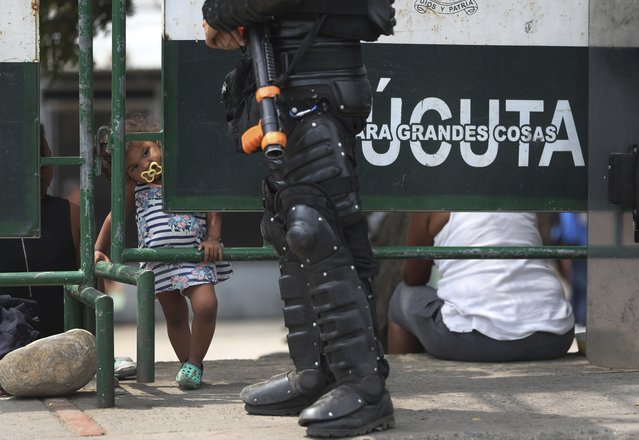 A Venezuelan child stands at a checkpoint near the Simon Bolivar International Bridge in La Parada, Colombia, Wednesday, February 27, 2019, on the border with Venezuela whose government closed the bridge to block aid from entering. U.S. envoy Elliott Abrams says the Trump administration will seek a U.N. Security Council vote this week on a resolution calling for Venezuela's government to let in humanitarian aid and to hold free elections. (Photo by Martin Mejia/AP Photo) 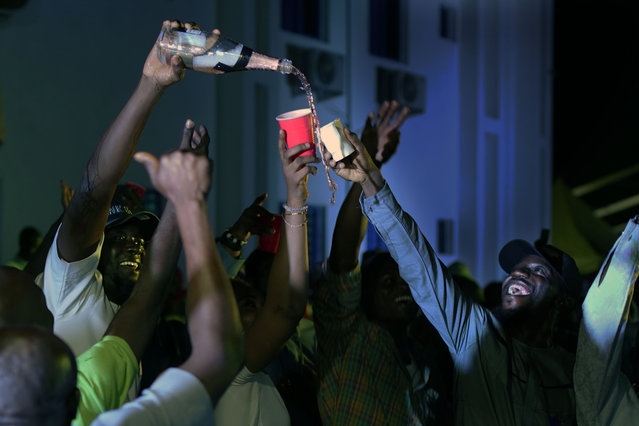 Supporters of Incumbent President Muhammadu Buhari pour champagne anticipating a win as they wait for the results to be officially announced in Abuja, Nigeria, Tuesday, February 26, 2019. Anxious Nigerians on Tuesday awaited a second day of state-by-state announcements of presidential election results in a race described as too close to call. Buhari is facing opposition presidential candidate Atiku Abubakar. (Photo by Jerome Delay/AP Photo) 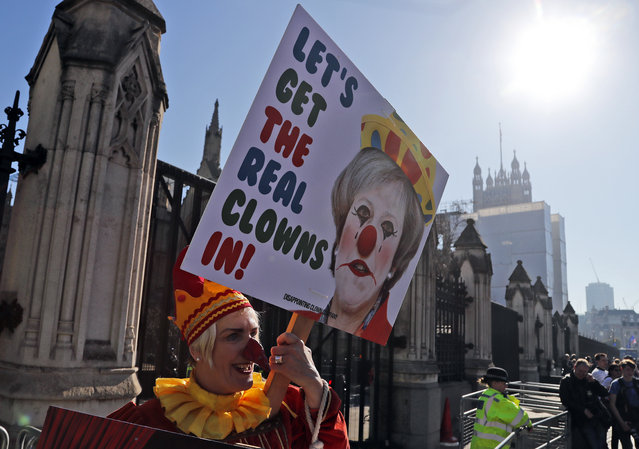 A Demonstrator protests at the entrance of the Houses of Parliament in London, Tuesday, Febryary 26, 2019. Bank of England Governor Mark Carney has warned that the Brexit uncertainty that has dogged the British economy over the past couple of years will remain even if lawmakers agree to a withdrawal agreement with the European Union in coming weeks. (Photo by Frank Augstein/AP Photo) 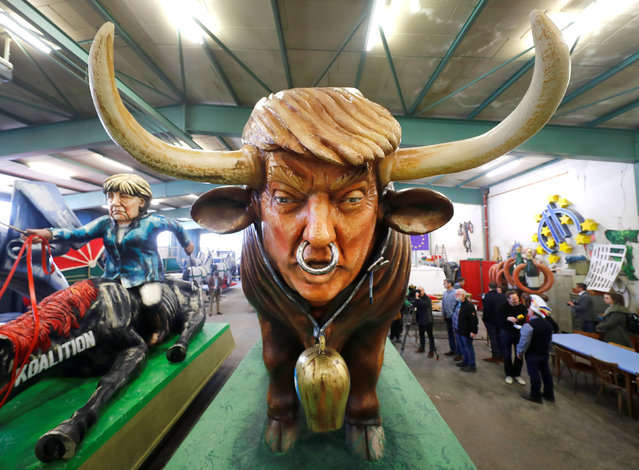 A paper mache bull depicting U.S. President Donald Trump is seen during the presentation of the floats for the upcoming Rose Monday parade in Mainz, Germany, February 26, 2019. Carnival groups and clubs in Germany are putting their final touches on their elaborate floats with outrageous caricatures depicting political themes for this year’s parades during Carnival celebrations. (Photo by Kai Pfaffenbach/Reuters) 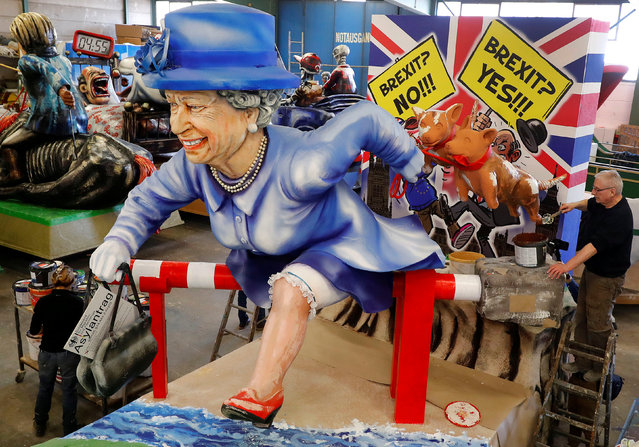 A paper mache figure depicting Queen Elizabeth running for asylum towards the EU is seen during the presentation of the floats for the upcoming Rose Monday parade in Mainz, Germany, February 26, 2019. (Photo by Kai Pfaffenbach/Reuters) 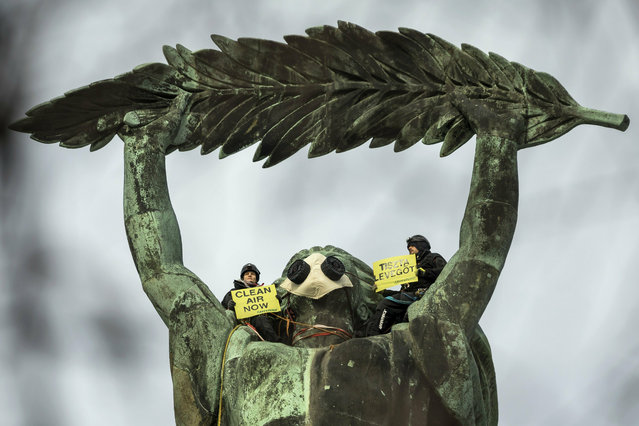 Environmental activists of Greenpeace demonstrate against the capital's air pollution on the statue of Freedom on top of Gellert Hill in Budapest, Hungary, Tuesday, February 26, 2019. (Photo by Balazs Mohai/MTI via AP Photo) 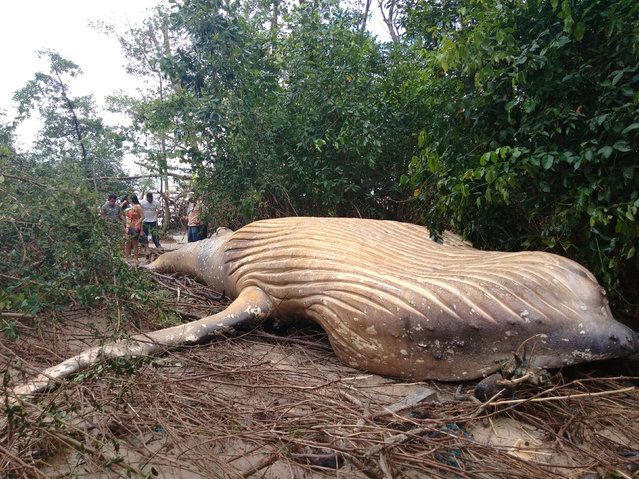 Biologists from the NGO Bicho D'agua check a humpback whale, that according to them was found dead inside a mangrove in Ilha do Marajo, Para state, Brazil February 23, 2019. A humpback whale was found dead in a mangrove swamp in the Brazilian island of Marajo, located in the Amazonian state of Para (north), after allegedly being dragged by the strong tide that hit the region, confirmed the NGO Instituto Bicho D'Agua on Tuesday. The cetacean, eight meters long, ran aground last week in the middle of a mangrove surrounded by trees up to 30 and 40 meters high, explained Renata Emin, president of the Institute dedicated to marine conservation. (Photo by NGO Bicho D'agua/Handout via Reuters) 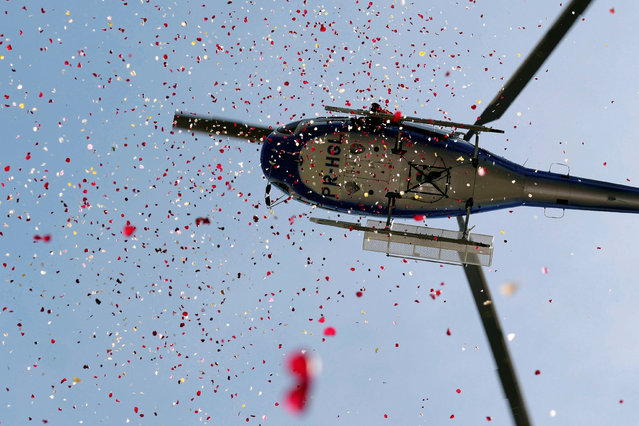 A helicopter showers flowers in honor of victims of the collapse of a dam owned by Brazilian mining company Vale SA, in Brumadinho, Brazil February 25, 2019. (Photo by Washington Alves/Reuters) 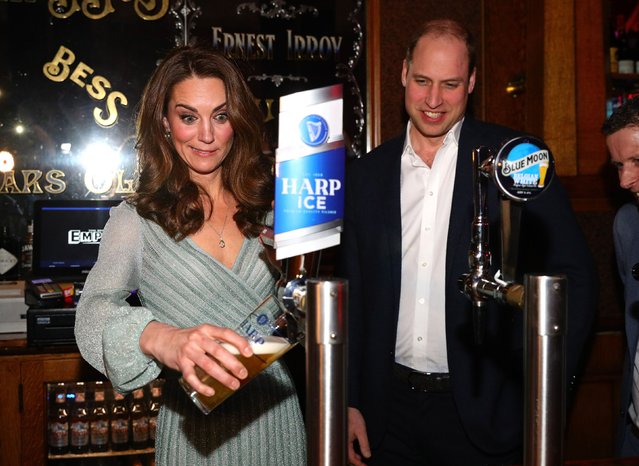 The Duchess of Cambridge pulls a pint with the Duke of Cambridge during their visit to Belfast Empire Hall for an informal party to celebrate inspirational young people who are making a real difference in Northern Ireland as part of their two day visit to Northern Ireland on February 27, 2019. (Photo by Aaron Chown/PA Wire Press Association) 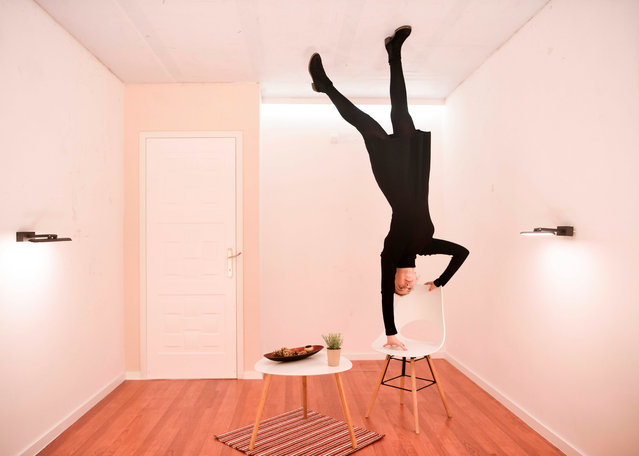 A visitor poses for a picture in the “Rotated Room” of the Museum of Illusions in Pristina on February 26, 2019. The museum contains a series of optical illusions giving the visitor the chance to produce unusual 3D images of themselves. (Photo by Armend Nimani/AFP Photo) 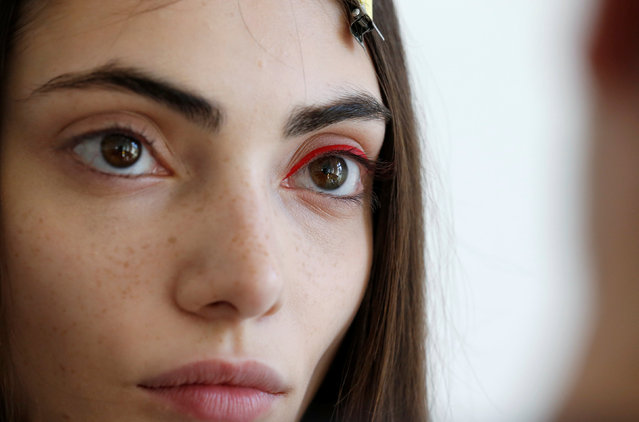