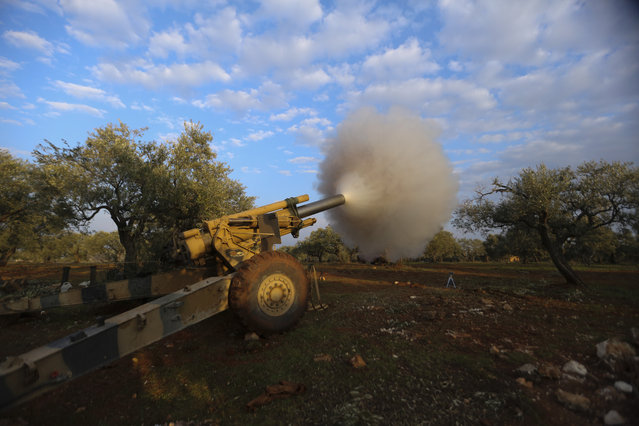 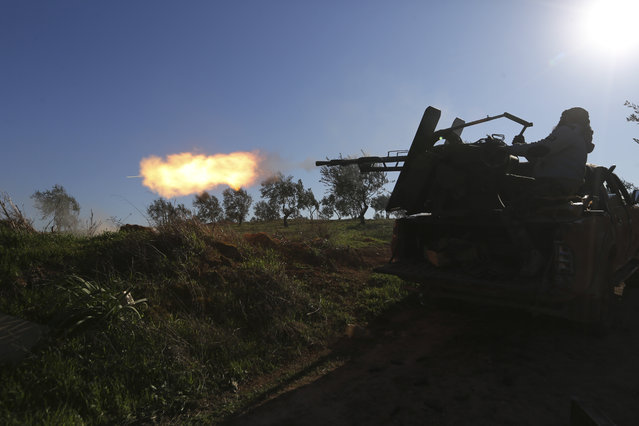 Turkish backed Syrian fighter fires at a frontline near the town of Saraqib in Idlib province, Syria, Wednesday, February 26, 2020. Syrian government forces have captured dozens of villages, including major rebel strongholds, over the past few days in the last opposition-held area in the country's northwest. (Photo by Ghaith Alsayed/AP Photo) 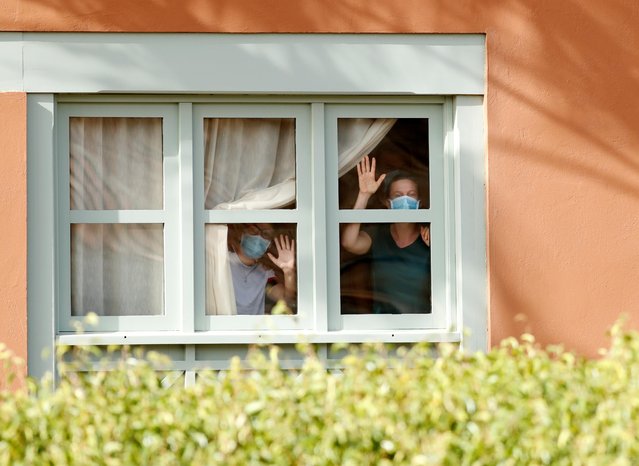 Guests, wearing protective face mask, look through a window at H10 Costa Adeje Palace, which is on lockdown after cases of coronavirus have been detected there in Adeje, on the Spanish island of Tenerife, Spain, February 26, 2020. (Photo by Borja Suarez/Reuters) 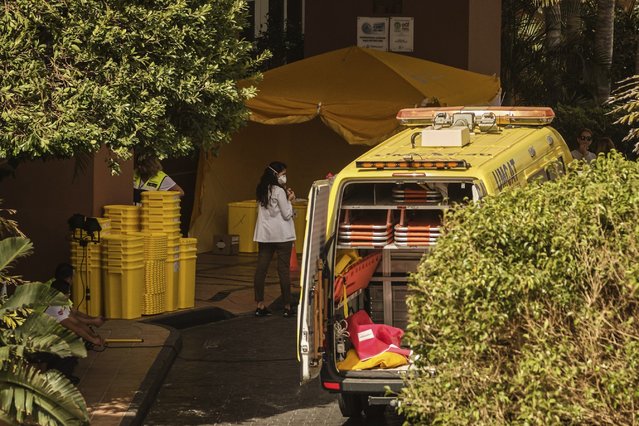 Health and hotel staffers gather at the H10 Costa Adeje Palace hotel in La Caleta, in the Canary Island of Tenerife, Spain, Wednesday, February 26, 2020. Spanish officials say a tourist hotel on the Canary Island of Tenerife has been placed in quarantine after an Italian doctor staying there tested positive for the COVID-19 virus and Spanish news media says some 1,000 tourists staying at the complex are not allowed to leave. (Photo by AP Photo/Stringer) 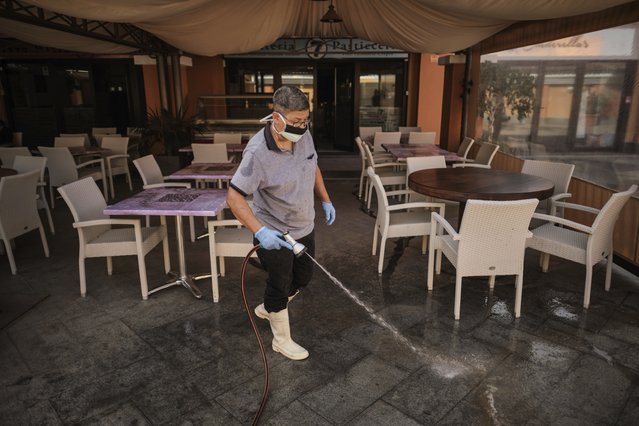 A staffer wearing a mask cleans the terrace of a shopping mall in La Caleta, in the Canary Island of Tenerife, Spain, Wednesday, February 26, 2020. Worries over the ever-expanding economic fallout of the COVID-19 crisis multiplied, with factories idled, trade routes frozen and tourism crippled, while a growing list of countries braced for the illness to claim new territory. Even the Olympics, five months away, wasn't far enough off to keep people from wondering if it would go on as planned. (Photo by AP Photo/Stringer) 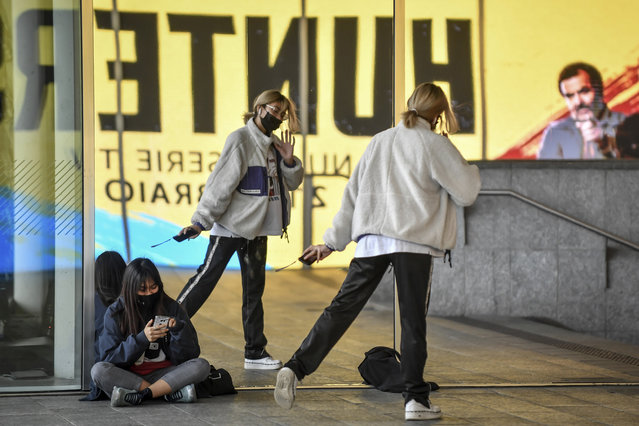 Girls wearing face masks are reflected on a window in downtown Milan's Gae Aulenti square Wednesday, February 26, 2020. The viral outbreak that began in China and has infected more than 80,000 people globally, so far caused 374 cases and 12 deaths in Italy, according to the last figures released by civil protection. (Photo by Claudio Furlan/LaPresse via AP Photo) 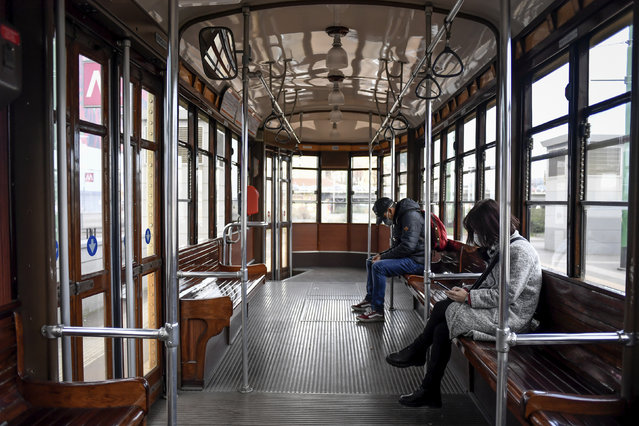 People wear sanitary masks as they ride an empty tram in downtown Milan, Italy, Wednesday, February 26, 2020. Italy has been struggling to contain the rapidly spreading outbreak that has given the country more coronavirus cases outside Asia than anywhere else. (Photo by Claudio Furlan/LaPresse via AP Photo) 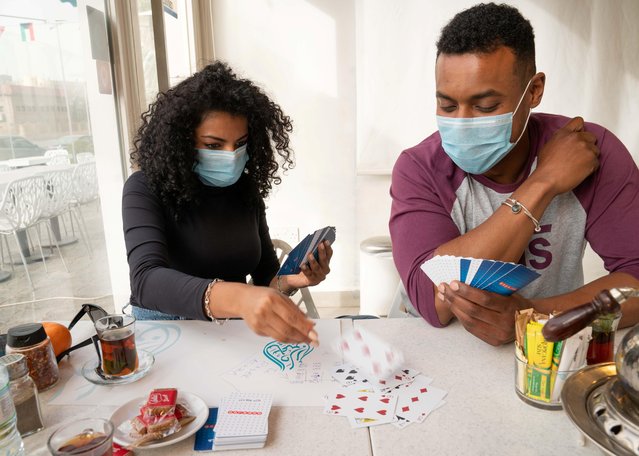 People wear protective face masks, following the outbreak of the new coronavirus, as they play cards in a coffee shop in Salmiya, Kuwait, February 26, 2020. (Photo by Stephanie McGehee/Reuters) 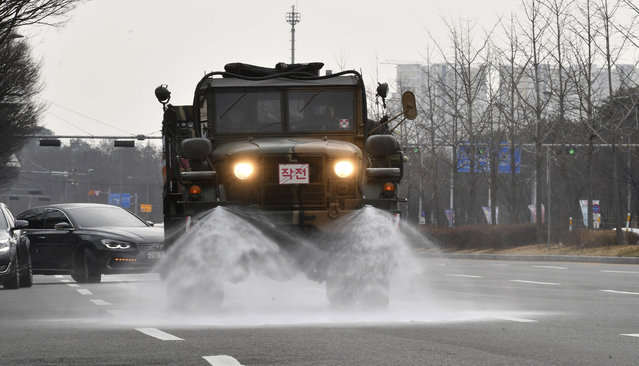 In this February 11, 2020 photo, Soldiers in the military truck, spray disinfectant as a precaution against the COVID-19 on the street in Gwangju, South Korea. The U.S. and South Korean militaries, used to being on guard for threats from North Korea, face a new and formidable enemy that could hurt battle readiness: a virus spreading around the world that has infected more than 1,200 people in South Korea. (Photo by Shin Dae-hee/Newsis via AP Photo) 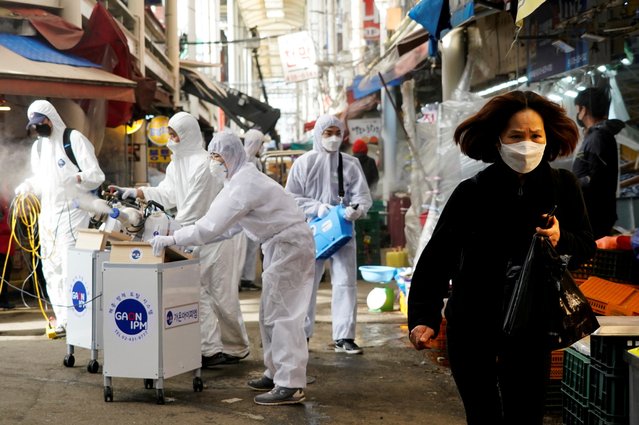 A woman wearing a mask to prevent contracting the coronavirus reacts as employees from a disinfection service company sanitize a traditional market in Seoul, South Korea, February 26, 2020. (Photo by Kim Hong-Ji/Reuters) 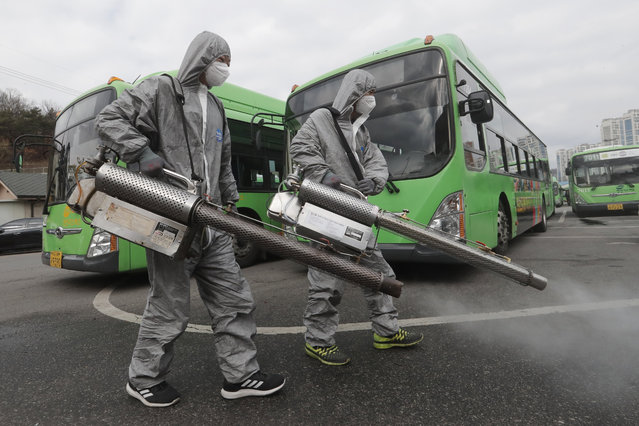 Workers wearing protective suits spray disinfectant as a precaution against the coronavirus at a bus garage in Seoul, South Korea, Wednesday, February 26, 2020. The number of new virus infections in South Korea jumped again Wednesday and the U.S. military reported its first case among its soldiers based in the Asian country, with his case and many others connected to a southeastern city with an illness cluster. (Photo by Ahn Young-joon/AP Photo) 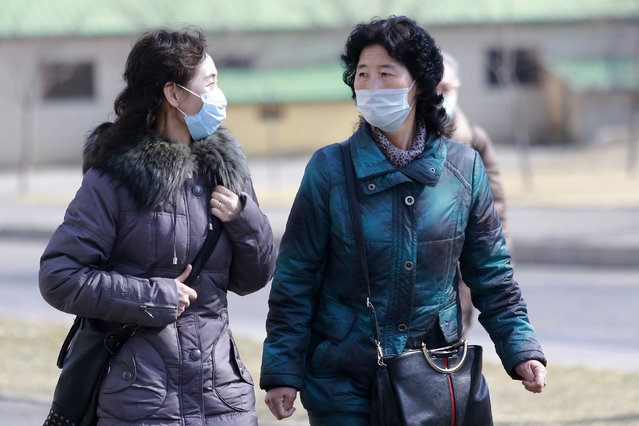 People wear masks to protect from a new coronavirus as they walk through the Kwangbok Street in Pyongyang, North Korea Wednesday, February 26, 2020. Uncertainly remained over how best to stem the spread of the illness. (Photo by Jon Chol Jin/AP Photo) 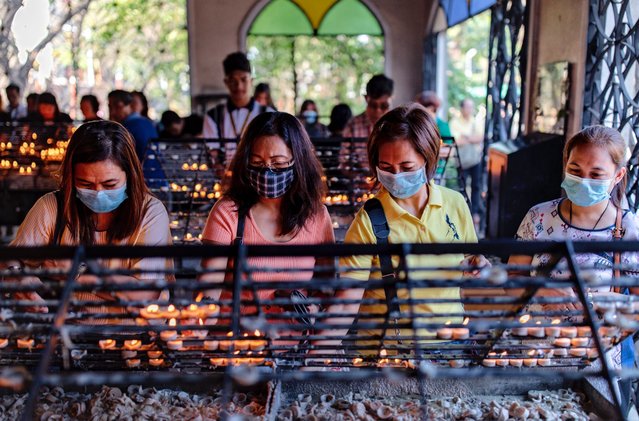 Filipino Catholics wearing protective masks light candles during Ash Wednesday services at a church on February 26, 2020 in Paranaque city, Metro Manila, Philippines. The Philippines Catholic Church has recommended sprinkling ash on the heads of devotees, rather than the usual practice of rubbing it on foreheads, to avoid physical contact as a precaution against COVID-19. The first COVID-19 death outside of China was reported in the Philippines last February 2, while the country has reported only 3 confirmed cases of the coronavirus so far. With over 78,000 confirmed cases around the world, the virus has so far claimed over 2,700 lives. (Photo by Ezra Acayan/Getty Images) 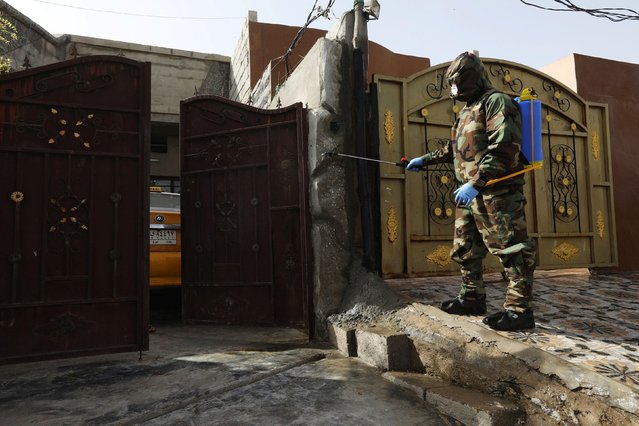 A member of the civil defense team sprays disinfectant to sanitize the houses near the house of people with detected coronavirus, in Kirkuk, Iraq on February 26, 2020. (Photo by Ako Rasheed/Reuters) 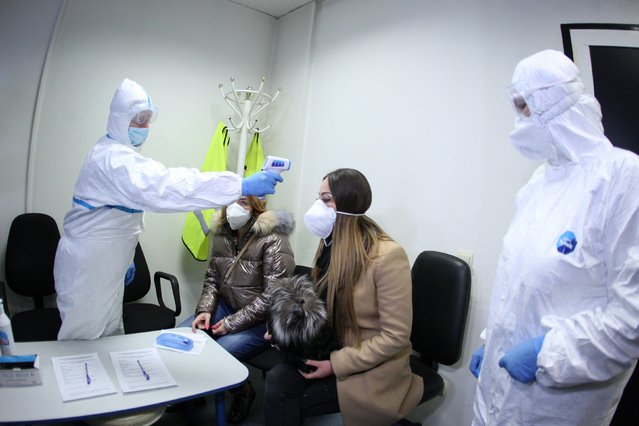 Health authorities take part in a drill to prepare for the potential arrival of passengers infected with the coronavirus at Sofia airport, Bulgaria, February 25, 2020. (Photo by Dimitar Kyosemarliev/Reuters) 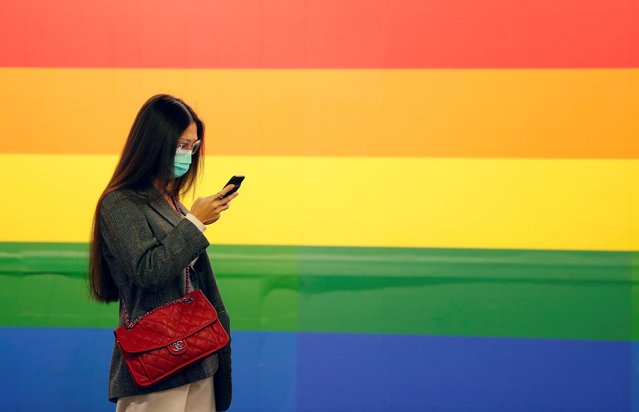 A woman in a face mask uses her phone in Porta Venezia subway in Milan, as the country is hit by the coronavirus outbreak, Italy on February 25, 2020. (Photo by Yara Nardi/Reuters) 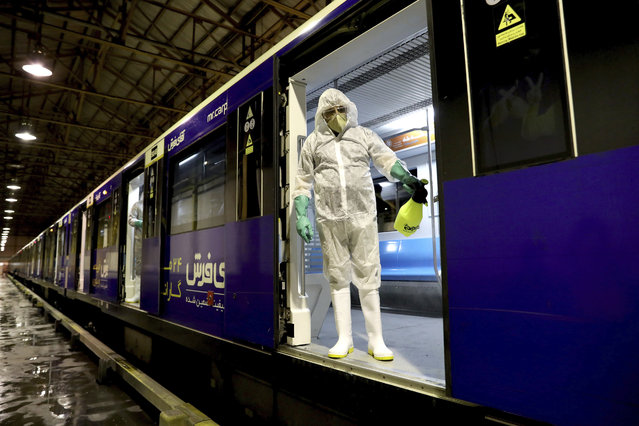 A worker disinfects subway trains against coronavirus in Tehran, Iran, in the early morning of Wednesday, February 26, 2020. Iran's government said Tuesday that more than a dozen people had died nationwide from the new coronavirus, rejecting claims of a much higher death toll of 50 by a lawmaker from the city of Qom that has been at the epicenter of the virus in the country. (Photo by Ebrahim Noroozi/AP Photo) 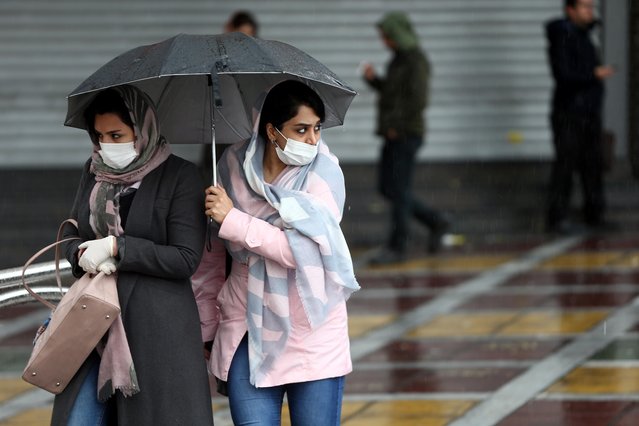 Iranian women wear protective masks to prevent contracting coronavirus, as they walk in the street in Tehran, Iran on February 25, 2020. (Photo by Nazanin Tabatabaee/WANA (West Asia News Agency) via Reuters) 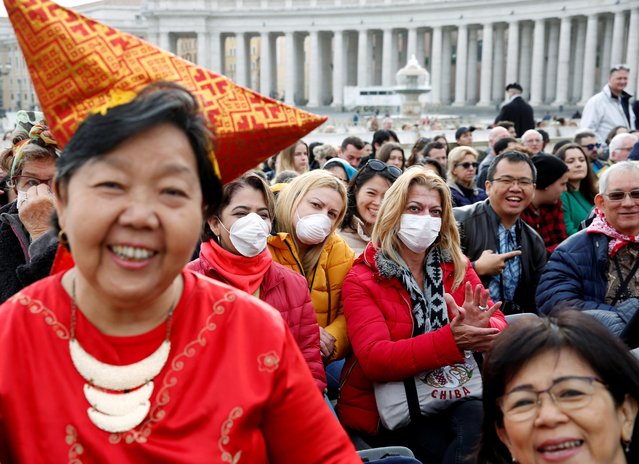 Faithful in face masks react as they wait for Pope Francis to arrive for the weekly general audience at the Vatican on February 26, 2020. (Photo by Remo Casilli/Reuters) 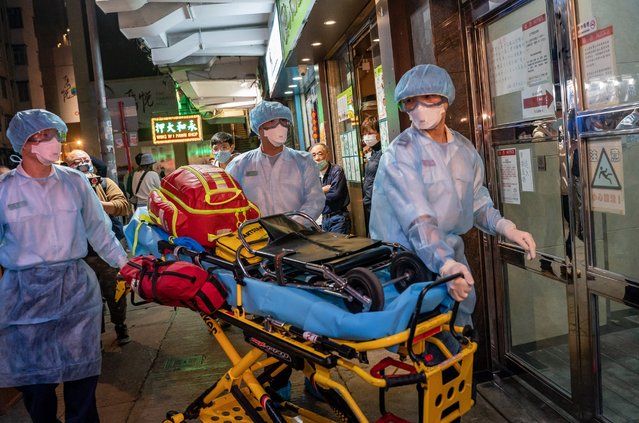 Paramedics wearing personal protective equipment carry a stretcher into a residential building at North Point district on February 23, 2020 in Hong Kong, China. South Korea has raised the Wuhan Covid-19 virus alert to the “highest level” as confirmed case numbers keep rising. Four more people in Hong Kong were confirmed to have contracted with coronavirus, including two elderly women who recently visited a North Point Buddhist worship hall, bringing the total tally of cases in the city to 74. (Photo by Anthony Kwan/Getty Images) 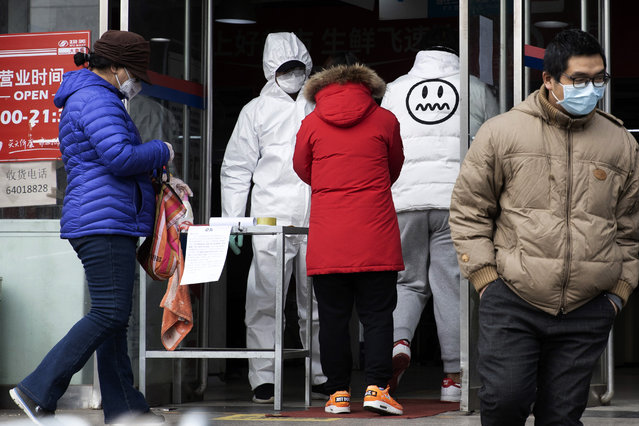 A worker in overalls screen for fever at the entrance to a supermarket in Beijing Thursday, February 27, 2020. South Korea and China each reported hundreds more virus cases Thursday as the new illness persists in the worst-hit areas and spreads beyond borders. (Photo by Ng Han Guan/AP Photo) 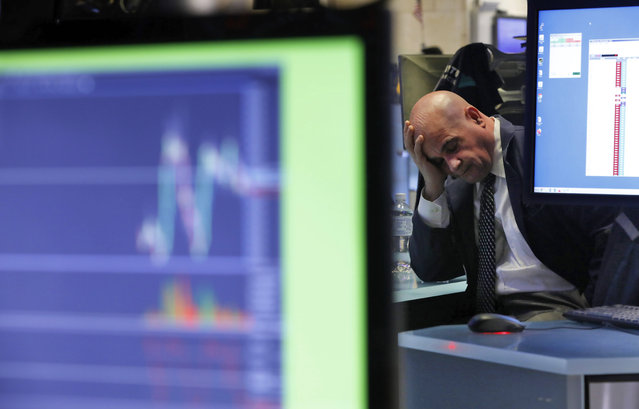 A specialist rests his head in his hand as he works on the floor of the New York Stock Exchange, Tuesday, February 25, 2020. U.S. stocks fell in midday trading Tuesday, a day after the market's biggest drop in two years, as traders worry that the spreading coronavirus will threaten global economic growth. (Photo by Richard Drew/AP Photo) 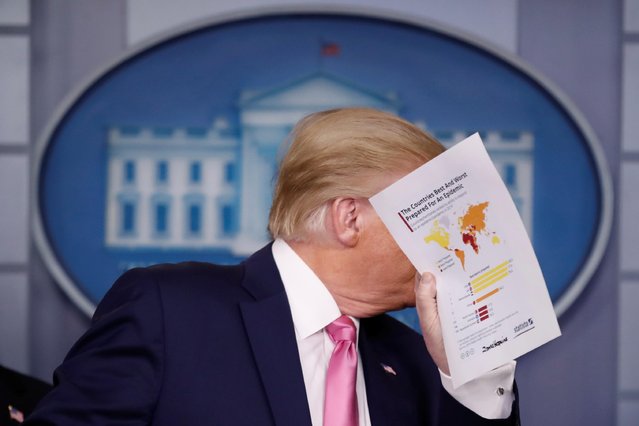