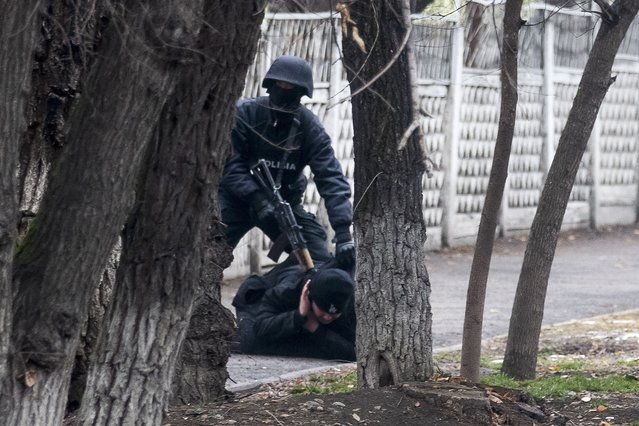 An armed riot police officer detains a protester during a security anti-terrorists operation in a street after clashes in Almaty, Kazakhstan, Saturday, January 8, 2022. Kazakhstan's president authorized security forces on Friday to shoot to kill those participating in unrest, opening the door for a dramatic escalation in a crackdown on anti-government protests that have turned violent. The Central Asian nation this week experienced its worst street protests since gaining independence from the Soviet Union three decades ago, and dozens have been killed in the tumult. (Photo by Vasily Krestyaninov/AP Photo) 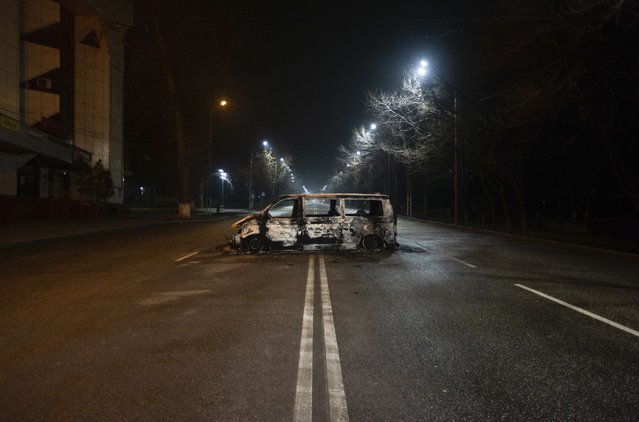 A police bus, which was burned after clashes, remains in an empty street in Almaty, Kazakhstan, late Saturday, January 8, 2022. The office of Kazakhstan's president says about 5,800 people were detained by police during protests that burst into violence last week and prompted a Russia-led military alliance to send troops to the country. (Photo by Vasily Krestyaninov/AP Photo) 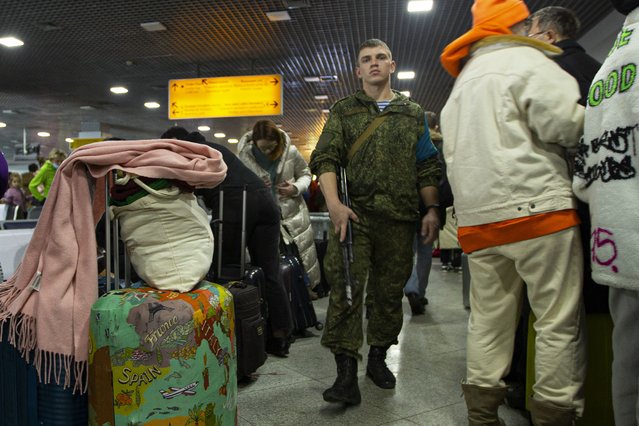 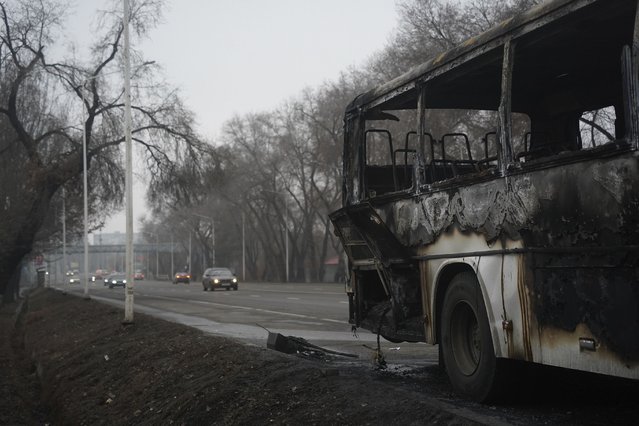 A bus, which was burned during clashes, is seen on a street in Almaty, Kazakhstan, Sunday, January 9, 2022. Kazakhstan's health ministry says 164 people have been killed in protests that have rocked the country over the past week. President Kassym-Jomart Tokayev's office said Sunday that order has stabilized in the country and that authorities have regained control of administrative buildings that were occupied by protesters, some of which were set on fire. (Photo by Vladimir Tretyakov/NUR.KZ via AP Photo) 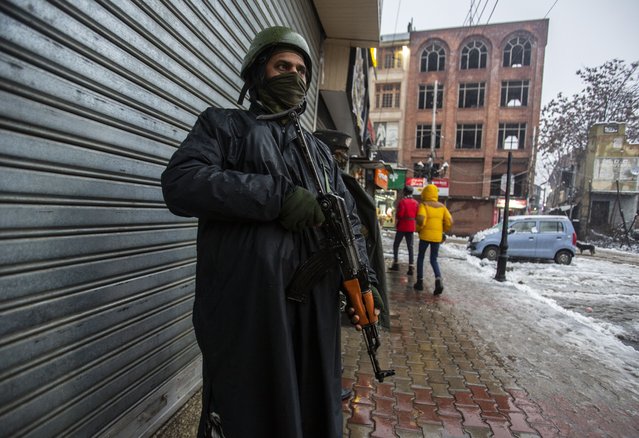 Indian paramilitary soldiers stand guard in Srinagar, Indian controlled Kashmir, Saturday, January 8, 2022. The New York-based Committee to Protect Journalists asked Indian authorities to immediately release journalist Sajad Gul in disputed Kashmir, days after police arrested him for uploading a video clip of a protest against Indian rule. Indian soldiers picked up Gul from his home in northeastern Shahgund village on Wednesday night and later handed him over to the police, his family said. He had posted a video of family members and relatives protesting the killing of a rebel commander on Monday. (Photo by Mukhtar Khan/AP Photo) 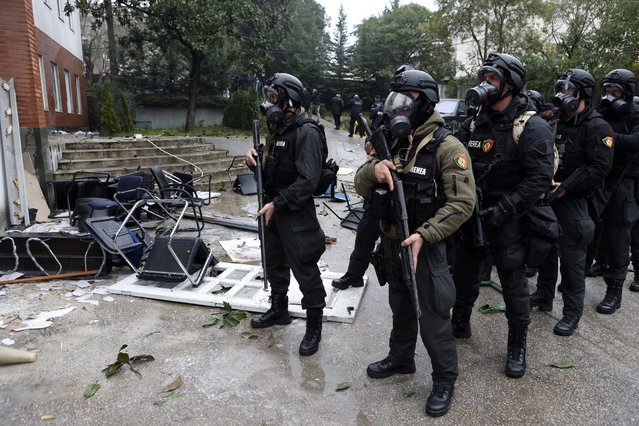 Riot police operate during clashes outside the headquarters of Democrats' Party in Tirana, Albania, Saturday, January 8, 2022. Albanian opposition supporters have clashed with each other and tried to storm their party headquarters following an internal fight for the party leadership. Former leader Sali Berisha of the main opposition Democratic Party has created a grouping trying to remove the party leader Lulzim Basha from the post accusing him of being a “hostage” of Prime Minister Edi Rama. (Photo by Franc Zhurda/AP Photo) 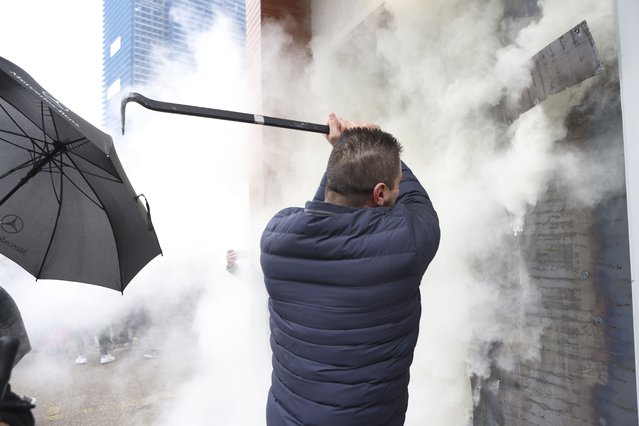 Employees of Democrats' Party use a fire extinguisher against protesters who try to invade at the headquarters in Tirana, Albania, Saturday, January 8, 2022. (Photo by Franc Zhurda/AP Photo) 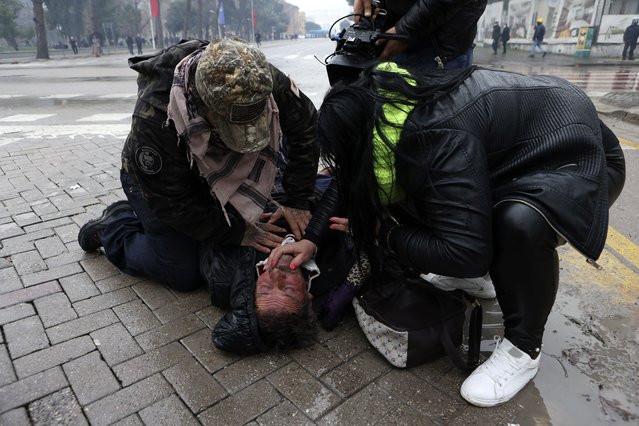 A protester lays on the ground during clashes outside the headquarters of Democrats' Party in Tirana, Albania, Saturday, January 8, 2022. (Photo by Franc Zhurda/AP Photo) 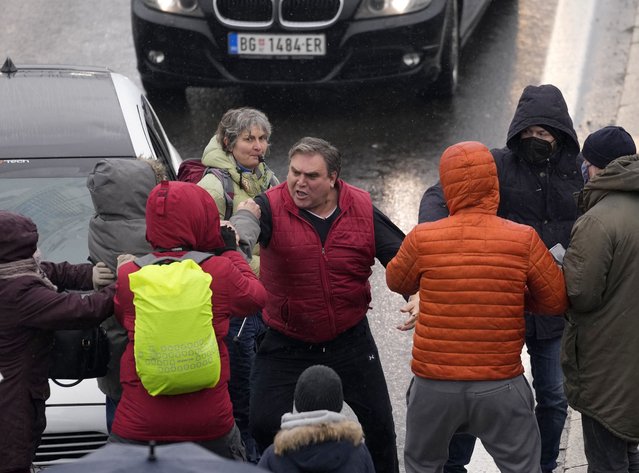 A driver, center, clashes with protesters on the blocked highway during a protest in Belgrade, Serbia, Saturday, January 8, 2022. Protesters in Belgrade and elsewhere in Serbia blocked main roads and bridges to oppose Rio Tinto's plan to launch a $2.4 billion mining operation in Serbia. (Photo by Darko Vojinovic/AP Photo) Policemen hold back people demonstrating against the Austrian government's measures taken in order to limit the spread of the coronavirus during a protest on January 8, 2022 in Vienna, amid the novel coronavirus / COVID-19 pandemic. (Photo by Florian Wieser/APA/AFP Photo) 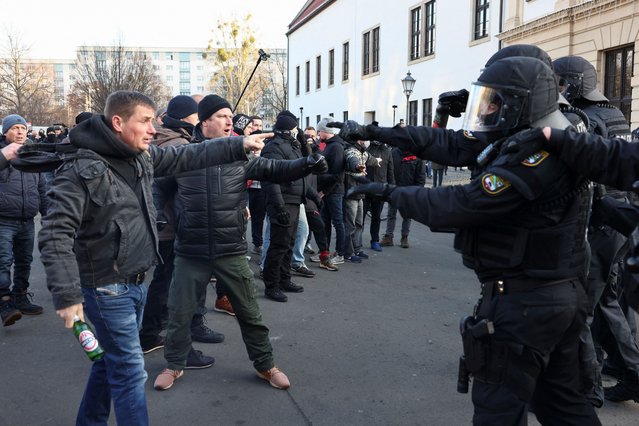 German riot police officers with protesters during a demonstration against government measures to curb the spread of the coronavirus disease (COVID-19) in Magdeburg, Germany, January 8, 2022. (Photo by Christian Mang/Reuters) 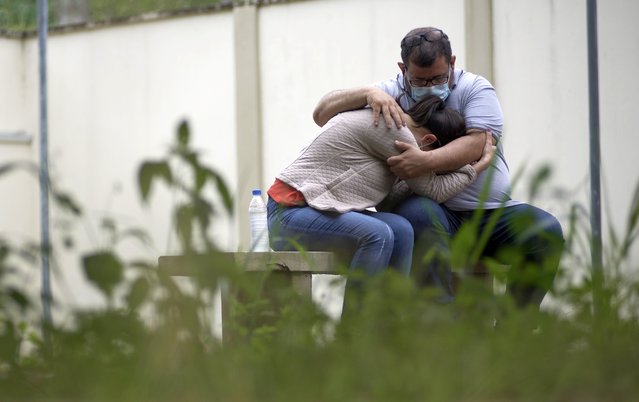 A couple embraces as they wait for information about missing relatives after a massive slab of rock broke away from a cliff and toppled onto pleasure boaters at Furnas reservoir on Saturday, killing at least seven people, near Capitolio city, Brazil, Sunday, January 9, 2022. (Photo by Igor do Vale/AP Photo) 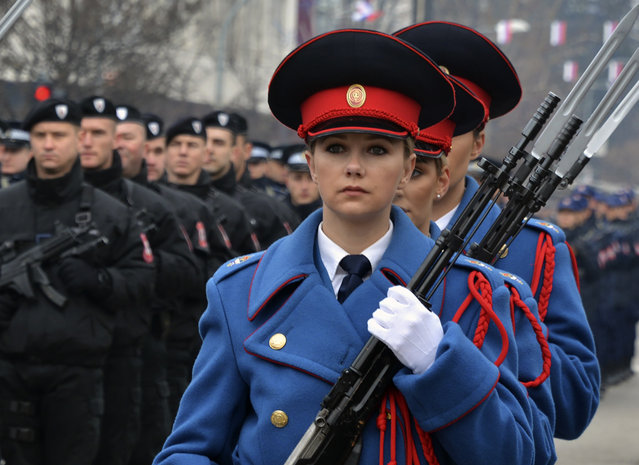 Members of the police forces of Republic of Srpska march during a parade marking the 30th anniversary of the Republic of Srpska in Banja Luka, northern Bosnia, Sunday, January 9, 2022. This week Bosnian Serb political leader Milorad Dodik was slapped with new U.S. sanctions for alleged corruption. Dodik maintains the West is punishing him for championing the rights of ethnic Serbs in Bosnia – a dysfunctional country of 3.3 million that's never truly recovered from a fratricidal war in the 1990s that became a byname for ethnic cleansing and genocide. (Photo by Radivoje Pavicic/AP Photo) 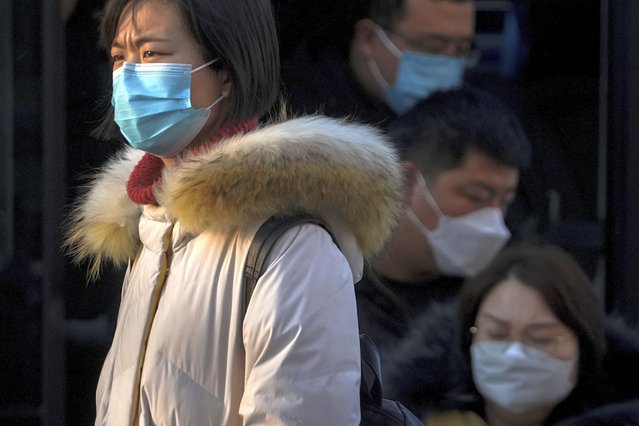 A woman wearing a face mask to protect from the coronavirus walks by masked commuters getting out of a bus during the morning rush hour in Beijing, Monday, January 10, 2022. Tianjin, a major Chinese city near Beijing has placed its 14 million residents on partial lockdown after a number of children and adults tested positive for COVID-19, including at least two with the omicron variant. (Photo by Andy Wong/AP Photo) 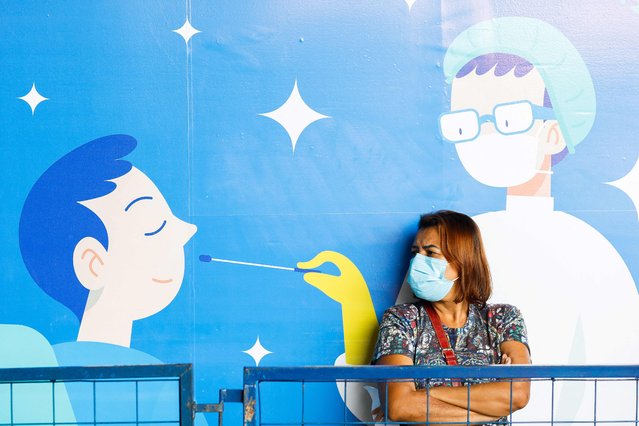 A woman waits for her turn to get a Covid-19 swab test at the urban bus station, in downtown BrasÌlia, Brazil, on January 07, 2022. (Photo by Sergio Lima/AFP Photo) 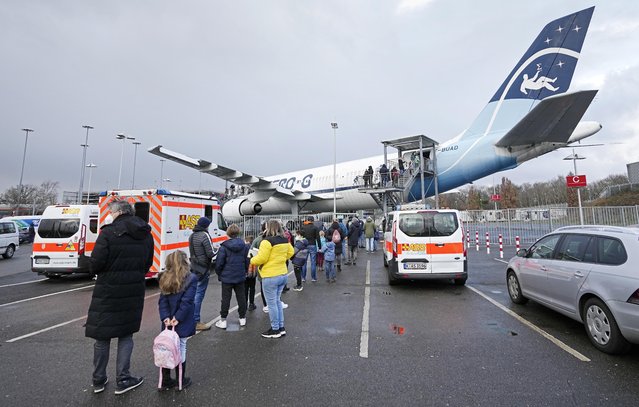 Families line up in front of an Airbus A300 Zero G plane, where children between 5 and 11 years get a vaccination against the coronavirus at the airport in Cologne, Germany, Sunday, January 9, 2022. The vaccination center inside the out of operation aircraft for parabolic flights is to promote COVID-19 vaccinations as an exciting event for the kids. (Photo by Martin Meissner/AP Photo) 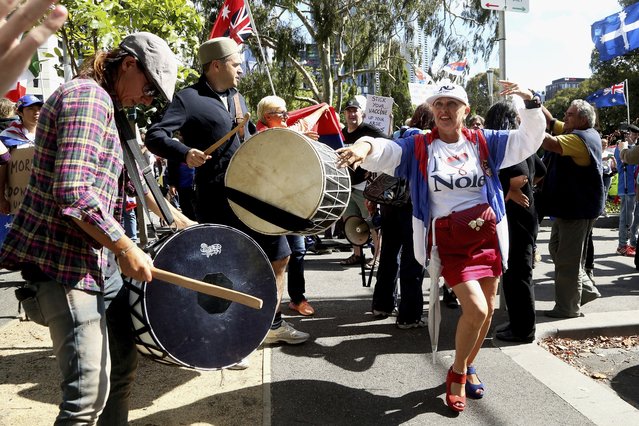 A protester and fan of Serbia's Novak Djokovic dances outside the Park Hotel, used as an immigration detention hotel where Djokovic is confined in Melbourne, Australia, Saturday, January 8, 2022. He has been confined to the detention hotel in Melbourne pending a court hearing on Monday, a week before the start of the Australian Open. Djokovic was barred from entering the country late Wednesday when federal border authorities at the Melbourne airport rejected his medical exemption to Australia's strict COVID-19 vaccination requirements. (Photo by Hamish Blair/AP Photo) 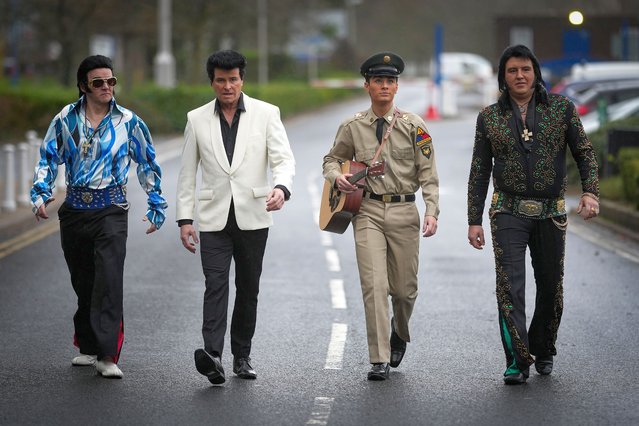 Elvis tribute artists, left to right, Chris Vegas, Steve Brooks, Emilio Santoro and Steve Knight pose for the media as they prepare to perform during the European Elvis Championships at the Hilton Hotel on January 07, 2022 in Birmingham, England. The competition returns after last year's event was cancelled due to Covid-19 restrictions. Elvis impersonators are taking part in three days of competition to be crowned the king of Europe's Elvis tribute artists. (Photo by Christopher Furlong/Getty Images) 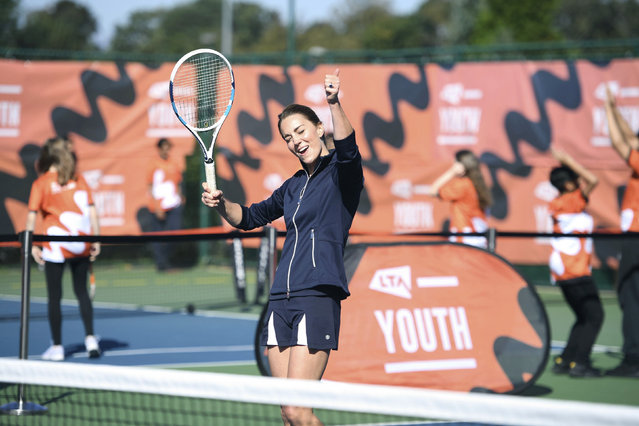 Britain's Kate, the Duchess of Cambridge reacts as she plays tennis with US Open Champion Emma Raducanu during an event hosted by the LTA Youth programme, at the National Tennis Centre in London, September 24, 2021. The Duchess of Cambridge, who turns 40 on Sunday Jan. 9, 2022, has emerged as Britain’s reliable royal. After Prince Harry and Meghan’s stormy departure to California in 2020, the death of Prince Philip last year, and now sеx abuse allegations against Prince Andrew, the former Kate Middleton remains in the public eye as the smiling mother of three who can comfort grieving parents at a children's hospice or wow the nation by playing piano during a televised Christmas concert. (Photo by Jeremy Selwyn/Pool Photo via AP Photo, File)
Edit Del
10 Jan 2022 07:35:00, post received 0 comments
Publication archive:
←   →
Popular tags:
All tags
Last searches: