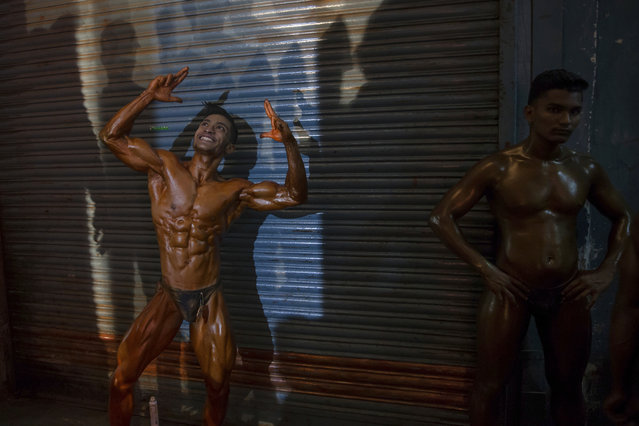 Indian body builders flex their muscles as they pose before participating in the Junior Mumbai Body Building championship in Mumbai, India, Wednesday, January 10, 2018. More than one hundred youth participated in the competition. (Photo by Rafiq Maqbool/AP Photo) 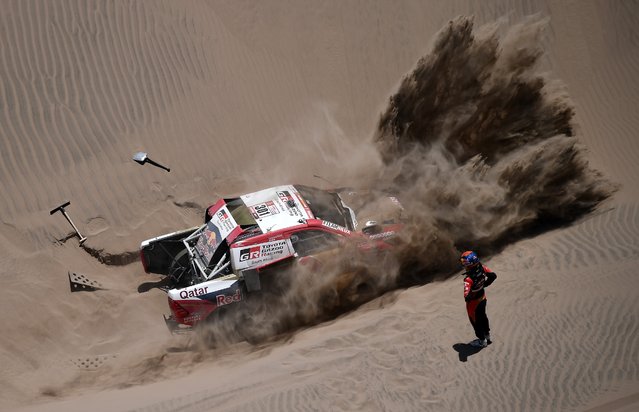 Toyota's driver Nasser Al-Attiyah of Qatar and his co-driver Matthieu Baumel of France get stuck in the sand dunes during Stage 4 of the Dakar 2018, in and around San Juan De Marcona, Peru, on January 9, 2018. (Photo by Franck Fife/AFP Photo) 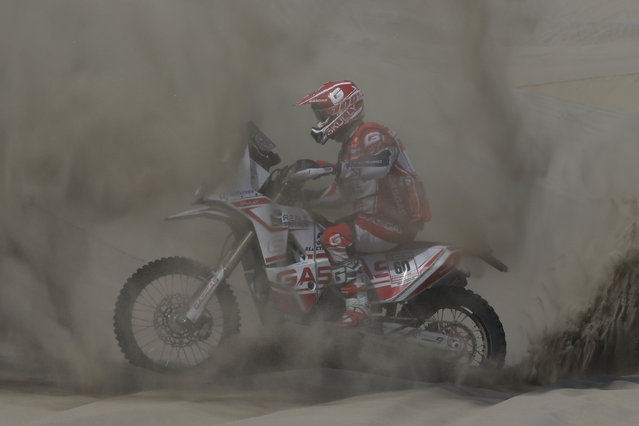 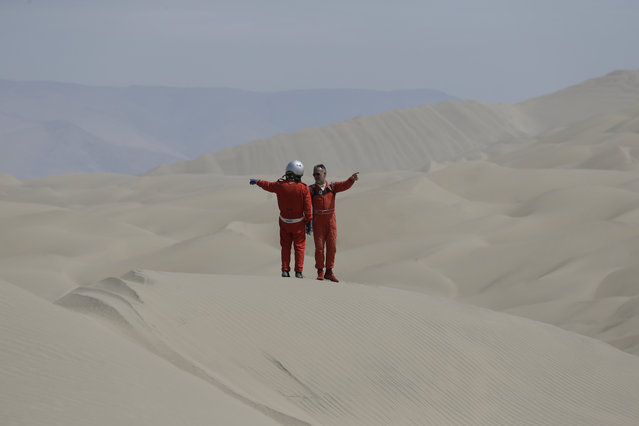 Philippe Raud, of France, right, and Miguel Angel Alvarez Pineda, of Peru, both drivers of Toyota cars trie to figure out their way in the dunes during stage 5 of the 2018 Dakar Rally between San Juan de Marcona and Arequipa, Peru, Wednesday, January 10, 2018. (Photo by Ricardo Mazalan/AP Photo) 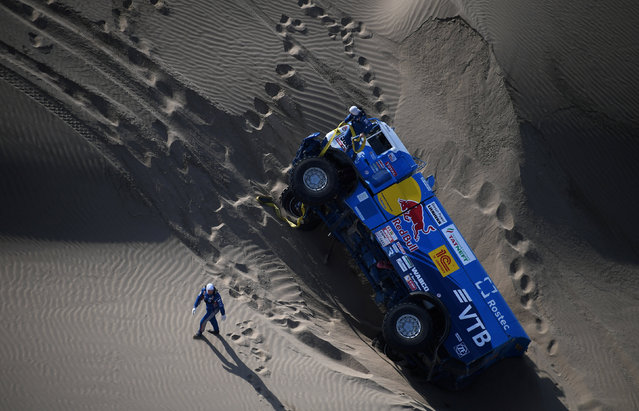 Kamaz Russian driver Eduard Nikolaev, co- drivers Evgeny Yakovlev and mechanic Vladimir Rybakov are stuck in the sand after their truck tipped over during the 2018 Dakar Rally Stage 5 between San Juan De Marcona and Arequipa in Peru, on January 10, 2018. Sebastien Loeb was forced to pull out of the Dakar Rally after a back injury suffered by his co- driver in a disastrous fifth stage won by defending champion Stephane Peterhansel. (Photo by Franck Fife/Reuters) 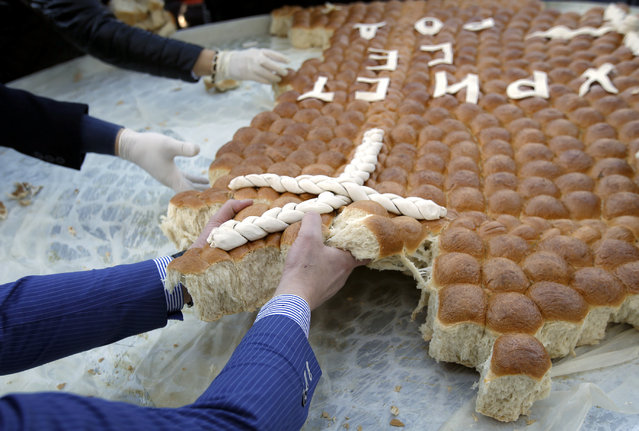 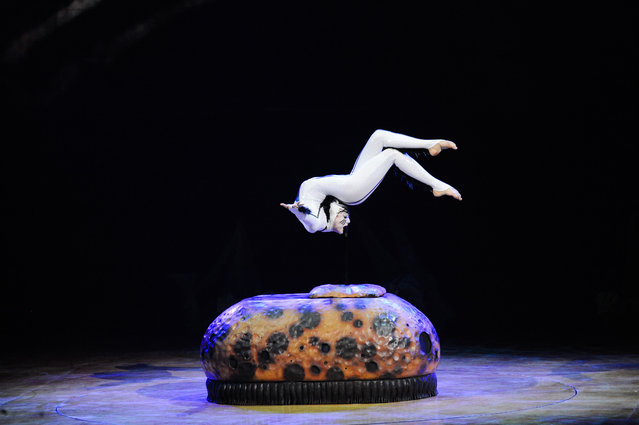 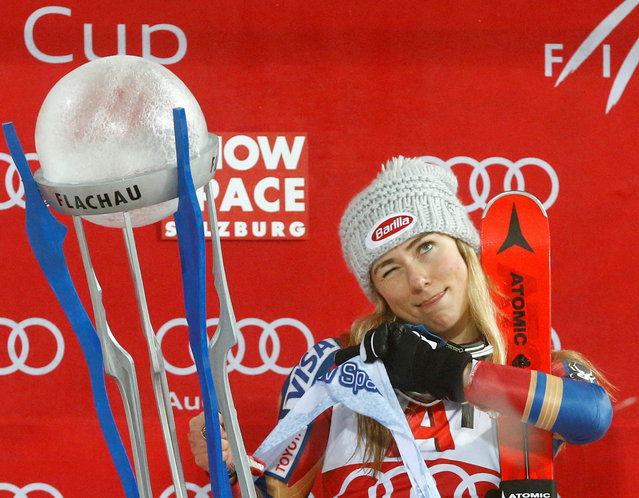 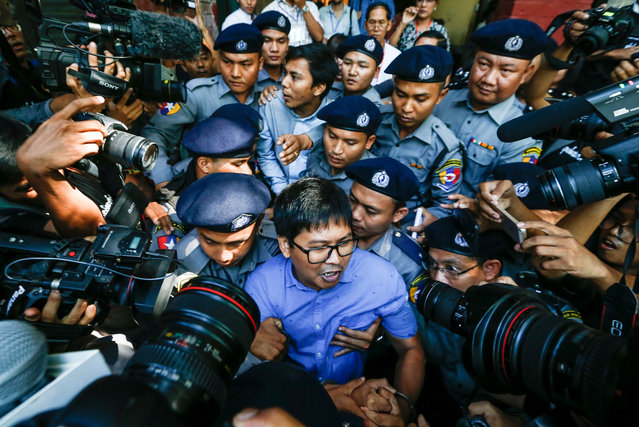 Reuters' journalists Wa Lone (C, front) and Kyaw Soe Oo (C, back) are escorted by police as they leave the court after their first trial in Yangon, Myanmar, 10 January 2018. Reuters journalists Wa Lone and Kyaw Soe Oo were arrested on the outskirts of Yangon city on 12 December 2017 by Myanmar police for allegedly possessing classified police documents. (Photo by Lynn Bo Bo/EPA/EFE) 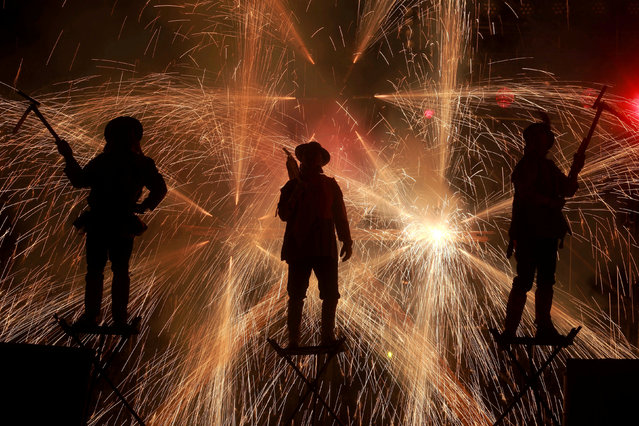 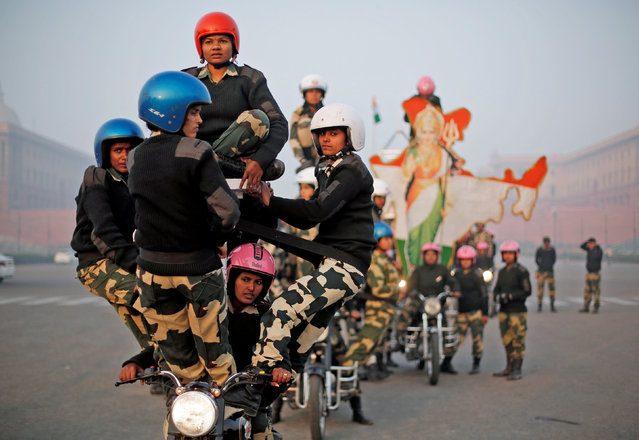 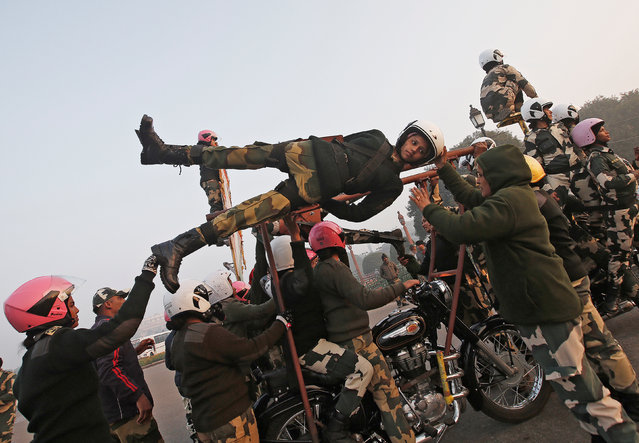 India's Border Security Force (BSF) “Daredevils” women motorcycle riders help their colleague to balance on a bike during a rehearsal for the Republic Day parade on a cold winter morning in New Delhi, India, January 10, 2018. (Photo by Adnan Abidi/Reuters) 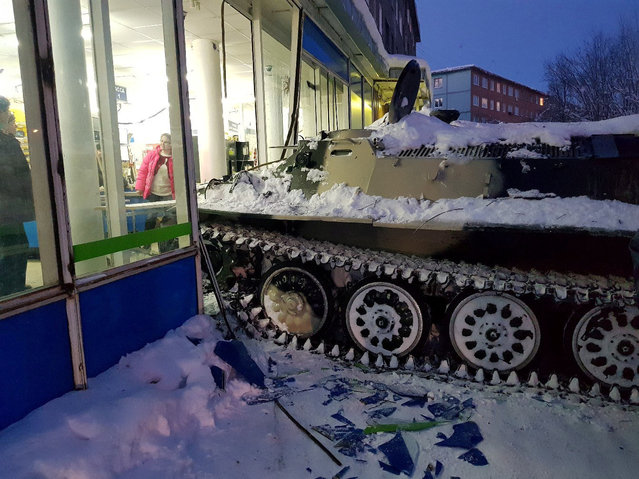 A view shows the scene of an incident involving an armoured personnel carrier (APC) which was rammed by a man into a shop window, before he climbed through the rubble to steal a bottle of wine, in the town of Apatity, Russia January 10, 2018. (Photo by Albert Borkin/Reuters) 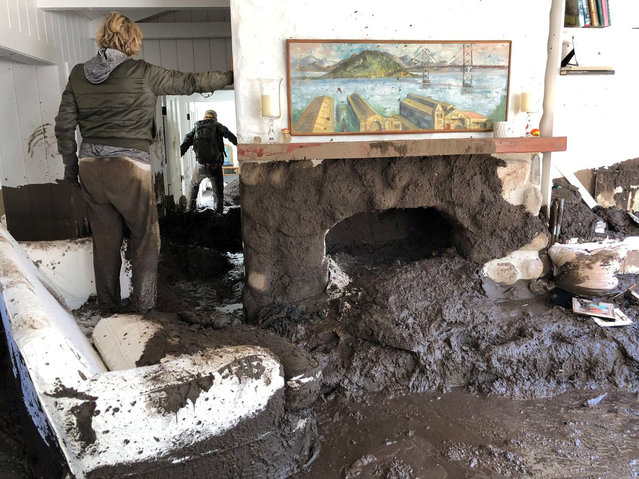 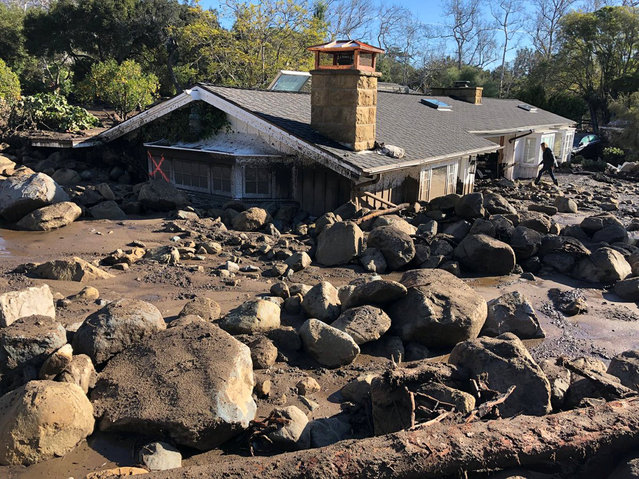 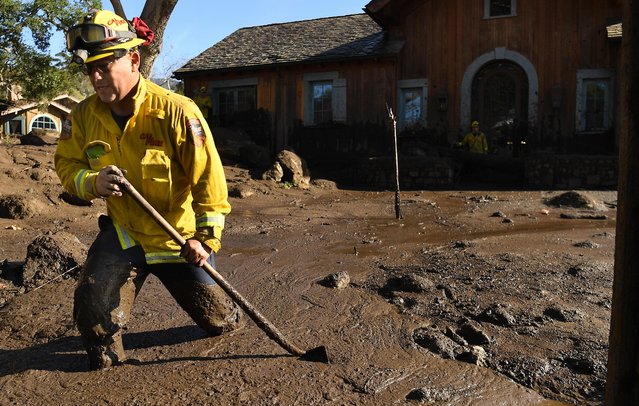 Cal Firefighter Alex Jimenez walks out after marking a spot with a stick where he found a body under the mud at a house along Glen Oaks Drive in Montecito after a major storm hit the burn area Wednesday on January 10, 2018 in Montecito, California. (Photo by Wally Skalij/Los Angeles Times via Getty Images) 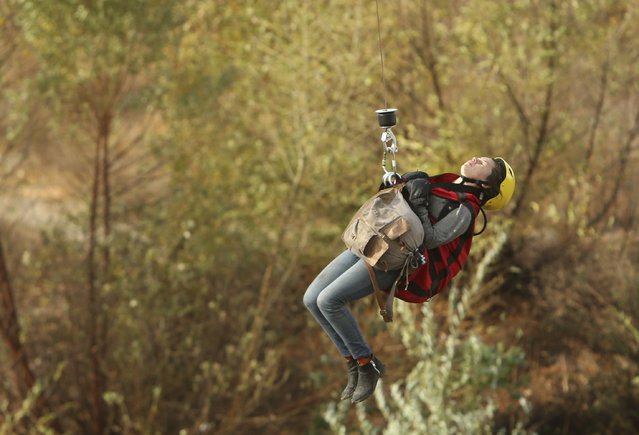 A women is hoisted out with the help of a San Bernardino County Sheriff' s helicopter on Tuesday, January 9, 2018, in the Santa Ana River and near the borders of Rialto, Colton, and Riverside, Calif. Three people and a dog were rescued by a helicopter after large amounts of rain fell, trapping the group at a homeless encampment in the river. (Photo by Stan Lim/Los Angeles Daily News via AP Photo) 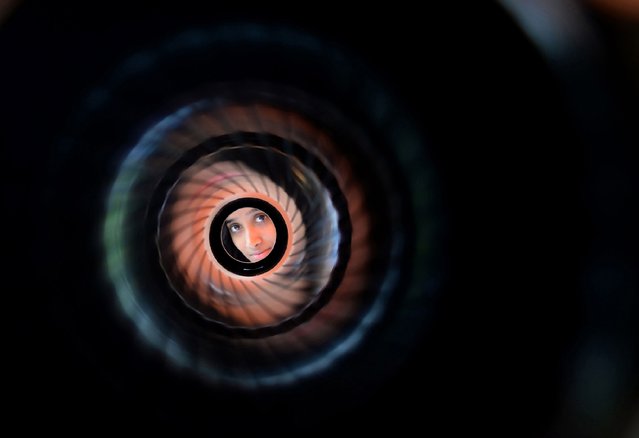 An Indian student looks into a rocket launcher during the Army Day celebration at a college in Chennai on January 10, 2018. (Photo by Arun Sankar/AFP Photo) 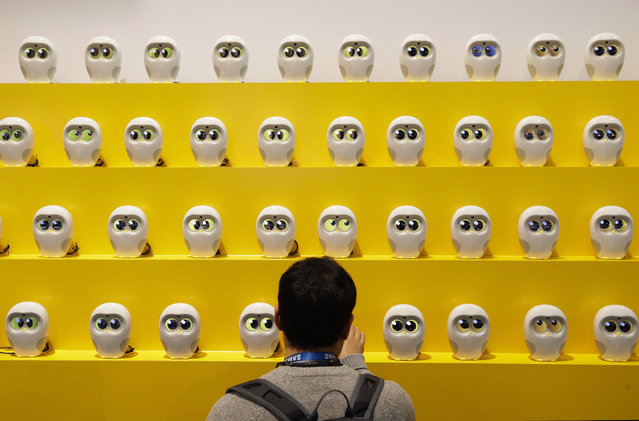 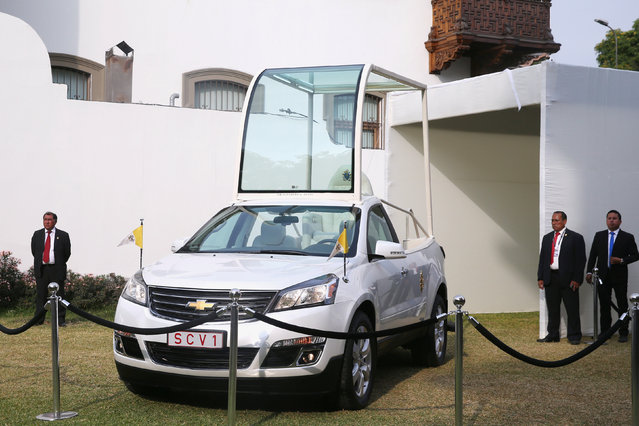 A presentation of the popemobile that will be used to transport Pope Francis during his next visit to Peru, in Lima, Peru January 10, 2018. (Photo by Guadalupe Pardo/Reuters) 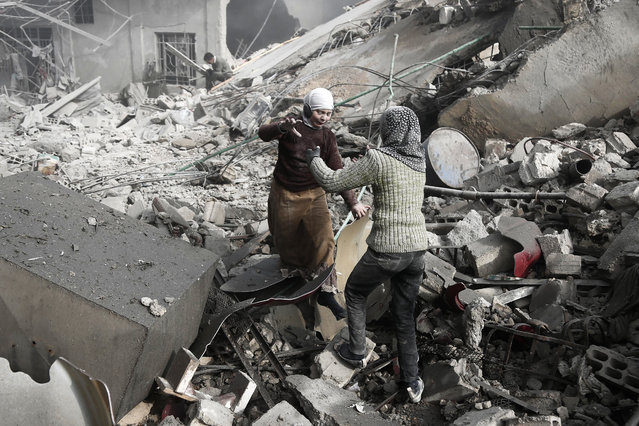 Two Syrian sisters run across the rubble to embrace after finding each other alive following an air strike on Hamouria, in the besieged rebel-held Eastern Ghouta area near Damascus, on January 9, 2018. Air strikes and artillery fire killed dozens of civilians in the besieged rebel enclave near Damascus targeted by near-daily regime bombardment, a war monitor said. (Photo by Abdulmonam Eassa/AFP Photo) 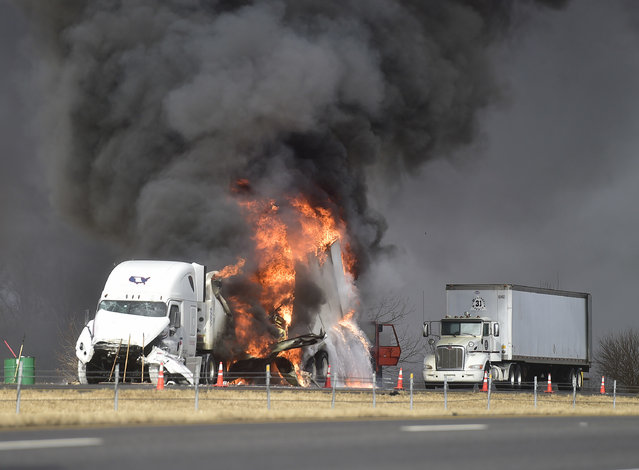 Two semitrailers in the southbound lanes of I-65 burn after a collision between three trucks near mile marker 43 near Seymour, Ind., Wednesday, January 10, 2018. One of the trucks involved in the accident was carrying four types of hazardous materials. Authorities have evacuated some homes in the area as a precaution and closed down the northbound and southbound lanes of the interstate. (Photo by Aaron Piper/The Republic via AP Photo) 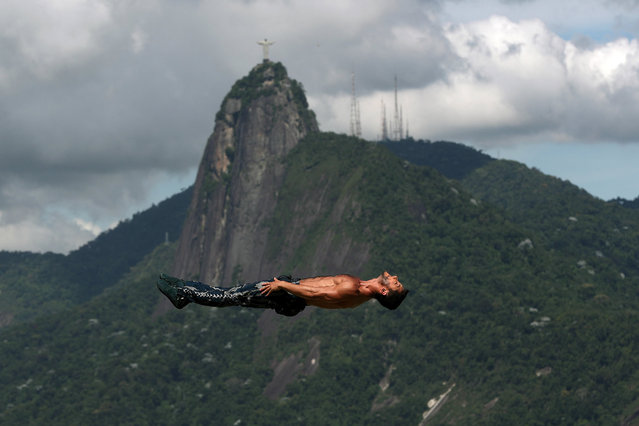 An acrobat from Circo del Sol in action during a presentation at the tourist hill of Urca, in Rio de Janeiro, Brazil, 10 January 2018. The fall of an acrobat, which resulted in injuries to one leg, forced the suspension of a brief exhibition of the Circus of the Sun at the popular Pao de Açucar, in Rio de Janeiro. The accident occurred when a group of circus acrobats developed a number with a scale and one of its members was injured in one leg when falling on a mat after a jump into the air. (Photo by Marcelo Sayao/EPA/EFE)

A Polish LOT airline passenger plane rests with its nose down on the runway after making an emergency landing with 59 passengers and four crew aboard, at the international Chopin Airport in Warsaw, Poland, Wednesday, January 10, 2018. Authorities think the front wheel malfunctioned during landing, but nobody was injured in the incident. (Photo by Czarek Sokolowski/AP Photo) 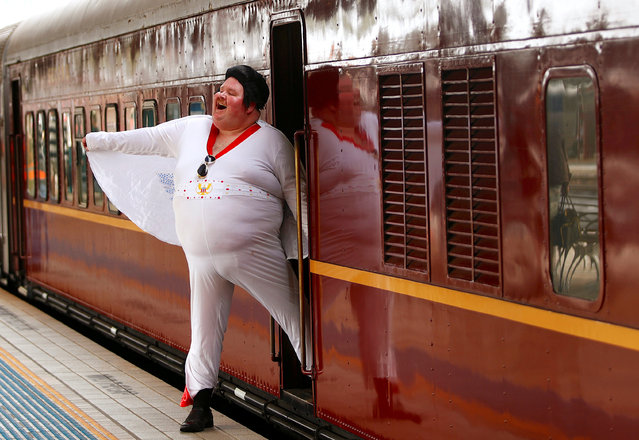