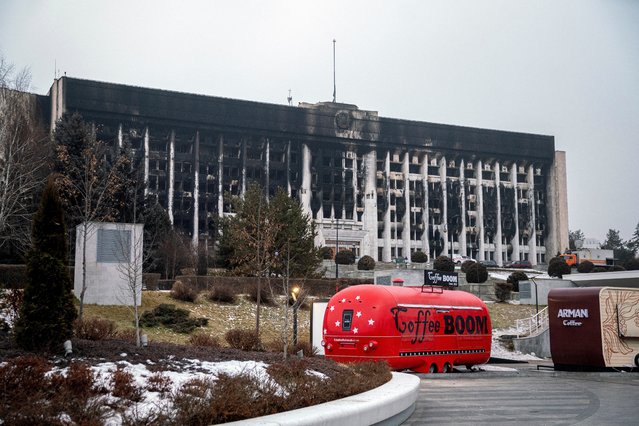 A photograph taken on January 10, 2022 shows a general view of a burnt-out Almaty City Administration building in central Almaty, following violent protests over the price increase of the fuel. Ex-Soviet Kazakhstan was observing on January 10, 2022 a day of national mourning, following the worst unrest in the republic's independent history. The National Security Committee said in a statement that the country, including government and military facilities, was fully under the control of security services. (Photo by Alexandr Bogdanov/AFP Photo) 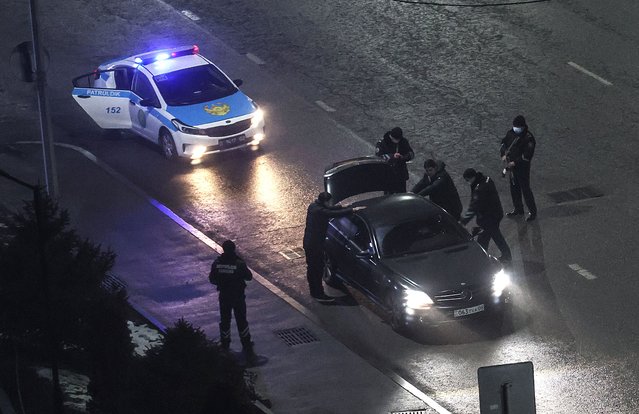 Detaining people who defied the curfew in Almaty, Kazakhstan on January 9, 2022. Kazakhstan has been gripped by unrest since 2 January 2022 sparked by a rise in the price for liquefied petroleum gas used for vehicles. On January 5, 2022, Kazakhstan's President Tokayev dismissed the cabinet, declared a two-week state of emergency over mass unrest in the country and asked the Collective Security Treaty Organisation (CSTO) for assistance. On January 6, 2022, a counterterrorism operation to stop mass unrest began. (Photo by Valery Sharifulin/TASS) 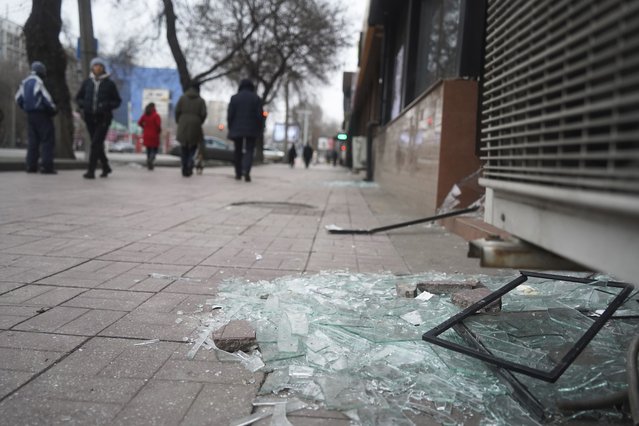 People walk past a shop with windows broken during clashes in Almaty, Kazakhstan, Monday, January 10, 2022. Kazakhstan's health ministry says over 150 people have been killed in protests that have rocked the country over the past week. President Kassym-Jomart Tokayev's office said Sunday that order has stabilized in the country and that authorities have regained control of administrative buildings that were occupied by protesters, some of which were set on fire. (Photo by Vladimir Tretyakov/NUR.KZ via AP Photo) 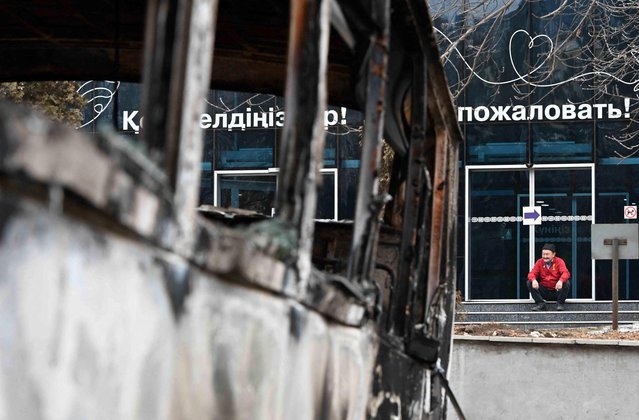 A man sits on the steps of a building as a vehicle, which was burnt during mass protests triggered by fuel price increase, is seen in the foreground, in Almaty, Kazakhstan on January 9, 2022. (Photo by Mariya Gordeyeva/Reuters) 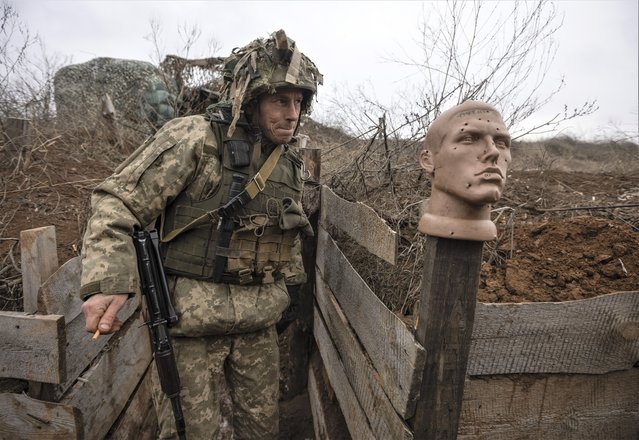 A Ukrainian soldier walks in a trench at the line of separation from pro-Russian rebels, Donetsk region, Ukraine, Sunday, January 9, 2022. President Joe Biden has warned Russia's Vladimir Putin that the U.S. could impose new sanctions against Russia if it takes further military action against Ukraine. (Photo by Andriy Dubchak/AP Photo) 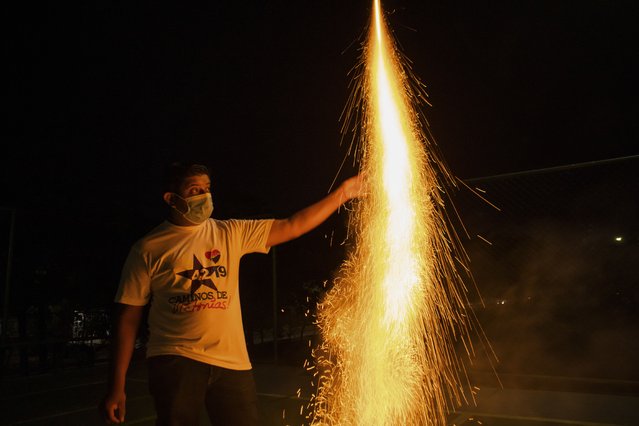 A neighbor launches fireworks to celebrate the inauguration of Nicaraguan President Daniel Ortega, at a park in the Julio Buitrago neighborhood of Managua, Nicaragua, Monday, January 10, 2022. Ortega was elected to a fourth consecutive term in Nov. 7 elections that were broadly criticized as a farce after seven likely challengers to Ortega were arrested and jailed in the months prior to the vote. (Photo by Andres Nunez/AP Photo) 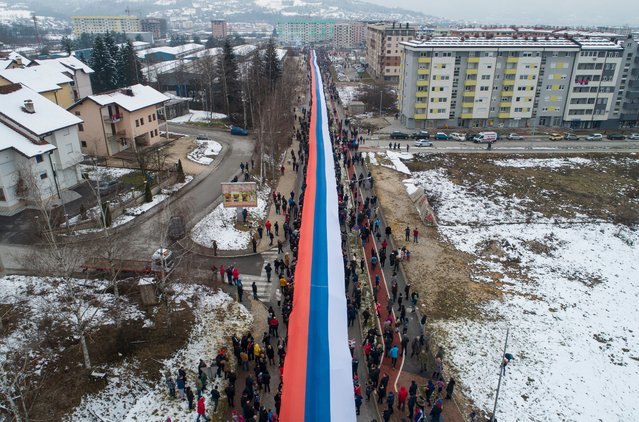 Bosnian Serbs march carrying a giant Serbian flag in Sarajevo, Bosnia, Sunday, January 9, 2022. Amid Bosnia's greatest political crisis since the end of its 1992-95 inter-ethnic war, the country's Serbs celebrated an outlawed holiday Sunday with a provocative parade showcasing armored vehicles, police helicopters and law enforcement officers with rifles, marching in lockstep and singing a nationalist song. The Jan. 9 holiday commemorates the date in 1992 when Bosnian Serbs declared creation of their own state in Bosnia, igniting the multi-ethnic country's devastating, nearly 4-year-long war that became a byname for ethnic cleansing and genocide. (Photo by AP Photo/Stringer) 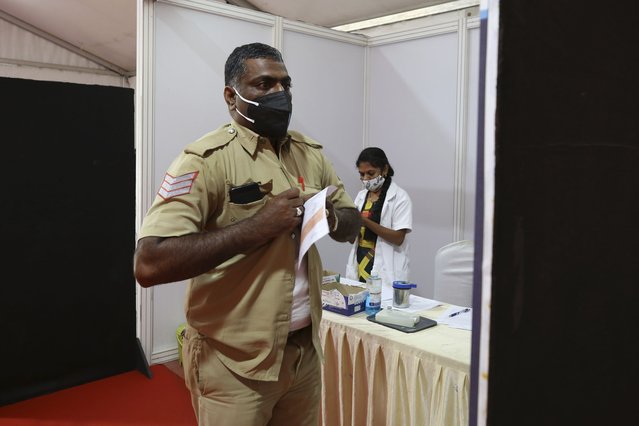 An Indian policeman buttons up his shirt after receiving the third dose of COVID-19 vaccine at a vaccination center in Bengaluru, India, Monday, January 10, 2022. Healthcare and front-line workers along with people above age 60 with health problems lined up Monday at vaccination centers across India to receive a third vaccination as infections linked to the omicron variant surge. India calls these “precautionary” doses and not boosters. (Photo by Aijaz Rahi/AP Photo) 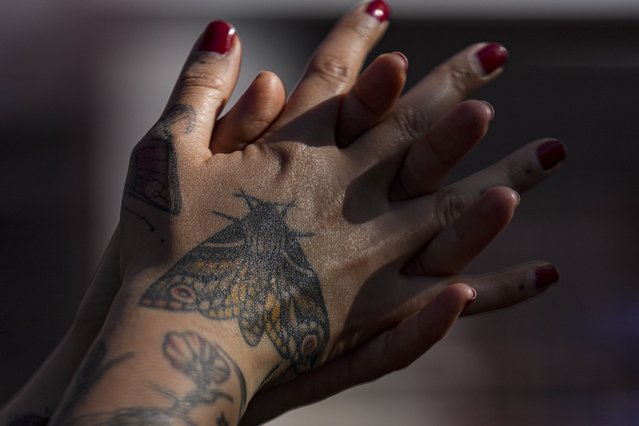 A woman uses anti-bacterial gel while waiting in line for her third shot of a COVID-19 vaccine, at the start of a booster shot campaign where people can get even a fourth shot in Santiago, Chile, Monday, January 10, 2022. (Photo by Esteban Felix/AP Photo) 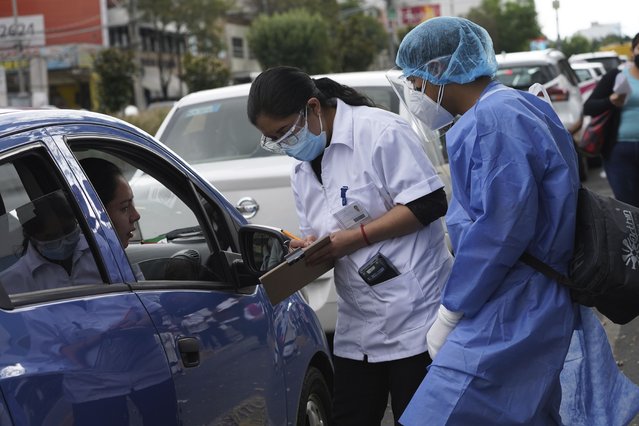 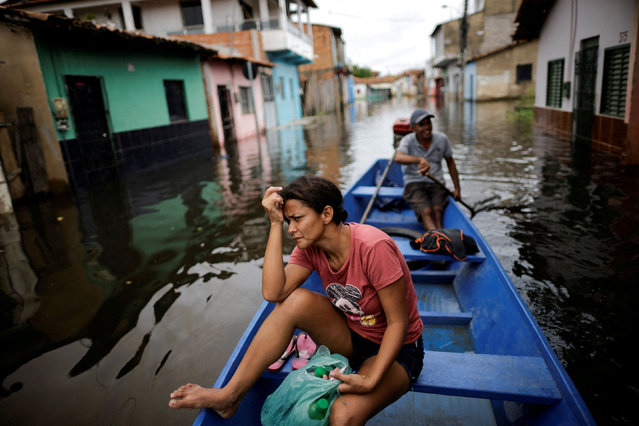 A woman looks on from a canoe after leaving her flooded house during floods caused by heavy rain in Maraba, Para state, Brazil on January 9, 2022. (Photo by Ueslei Marcelino/Reuters) 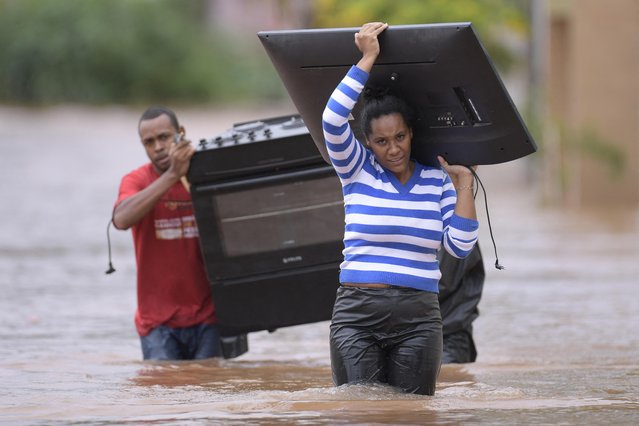 People wade through the water as they remove belongings from their homes in the flooded Brazilian municipality of Juatuba, located in the state of Minas Gerais, on January 10, 2022, after extremely heavy rain has fallen in recent days in the southeastern part of the country. (Photo by Douglas Magno/AFP Photo) 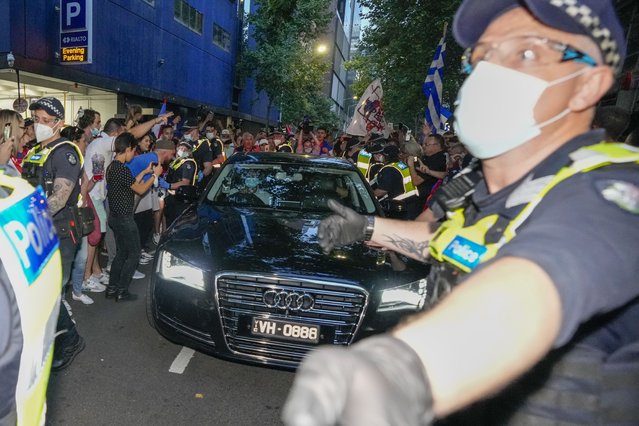 Police clear fans of Serbian Novak Djokovic as a car leaves the offices of lawyers following his court win ahead of the Australian Open in Melbourne, Australia, Monday, January 10, 2022. An Australian judge has reinstated Djokovic's visa, which was canceled after his arrival last week because he is unvaccinated. (Photo by Mark Baker/AP Photo) 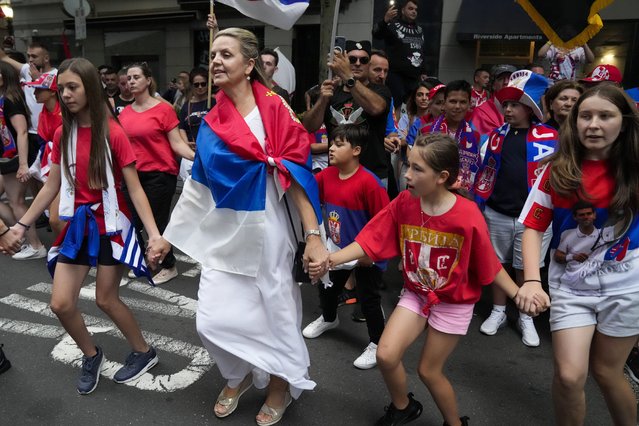 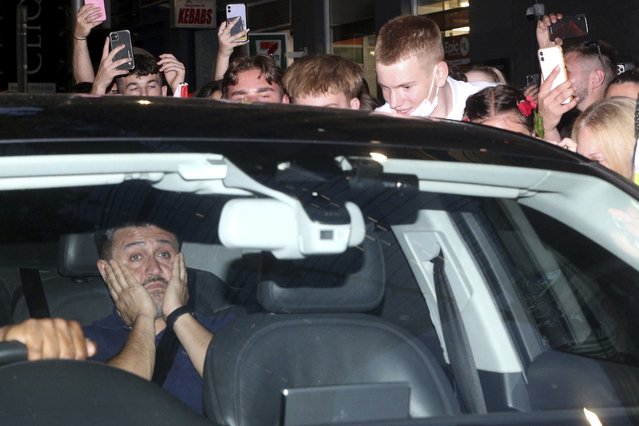 Fans of Serbian tennis star Novak Djokovic chase a car wrongly believed to be carrying him outside the Rialto building believed to be where he was located ahead of the Australian Open in Melbourne, Australia, Monday, January 10, 2022. (Photo by Hamish Blair/AP Photo) 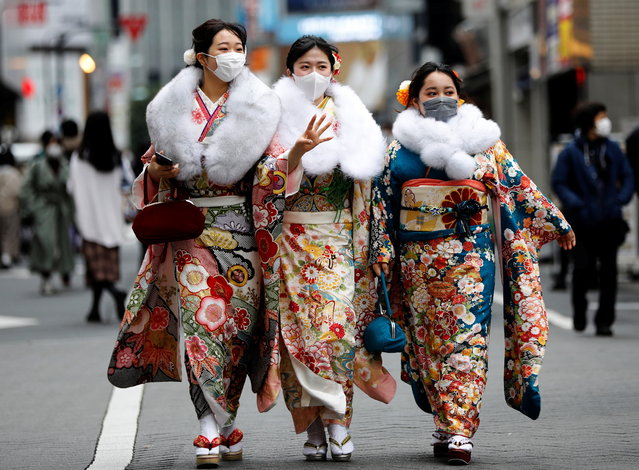 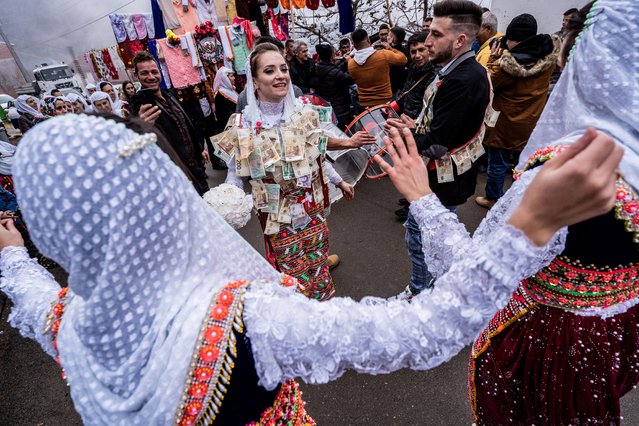 Muslim bride Nefie Eminkova, (L) and the groom Shaban Kiselov, (R) dance on a street, during their wedding day on January 9, 2022 in Ribnovo, Bulgaria. Bulgarian Pomaks from Ribnovo have their unique weddings only in the winter. The weddings continue two or three days and the bride must marry with her eyes closed and her face painted white with shining sequins. An estimated one million Muslims live in Bulgaria, approximately 10 per cent of the country's population. (Photo by Hristo Rusev/Getty Images) 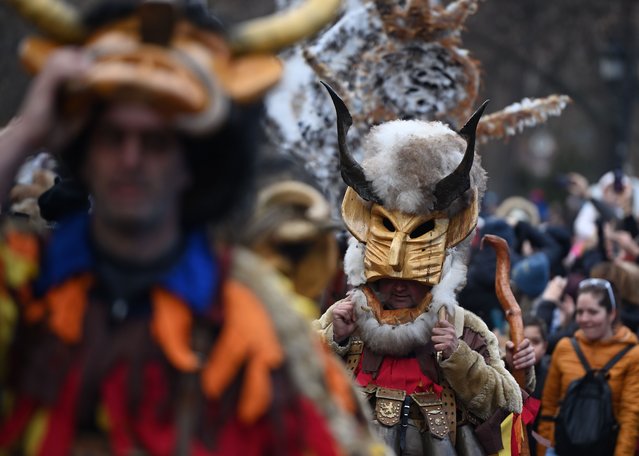 Costumed people, mask dancers called Kukeri, perform a traditional dance during the Surva Festival to ward off evil spirits in Sofia, Bulgaria, 09 January 2022. In ancient times, the old Thracians held the Kukeri Ritual Games in honor of god Dionysus – known as a god of wine and ecstasy. Even today these games are also known as the Dionysus' games. Among the Kukeri (singular: kuker) dancers' are many characters, including Dionysus and his satyrs as well as others from deep history such as the tsar, harachari, plyuvkachi, startzi, and pesyatzi. (Photo by Vassil Donev/EPA/EFE) 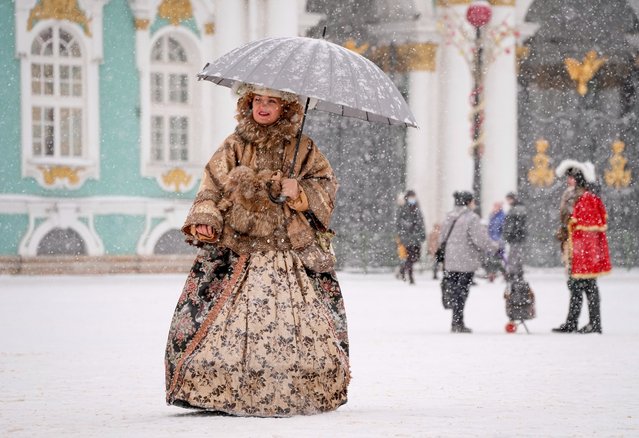