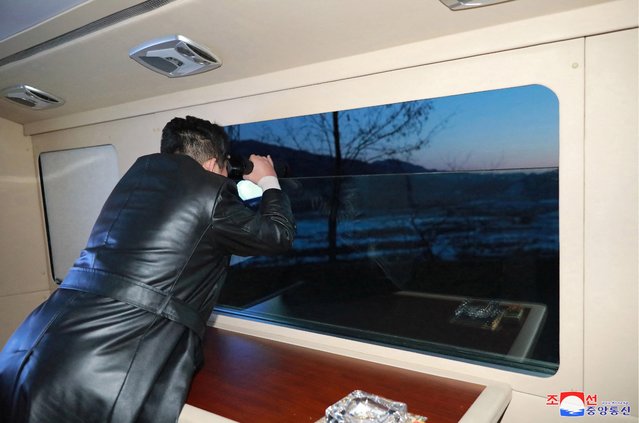 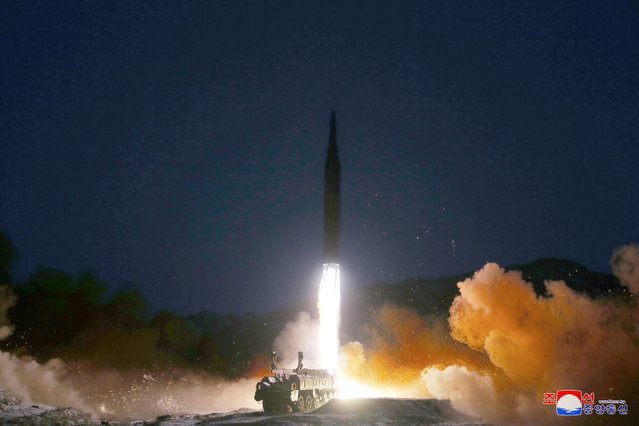 This picture taken on January 11, 2022 and released from North Korea's official Korean Central News Agency (KCNA) on January 12, 2022 shows what North Korea says a hypersonic missile test-fire conducted by the Academy of Defence Science of the DPRK at an undisclosed location. (Photo by KCNA via KNS/AFP Photo) 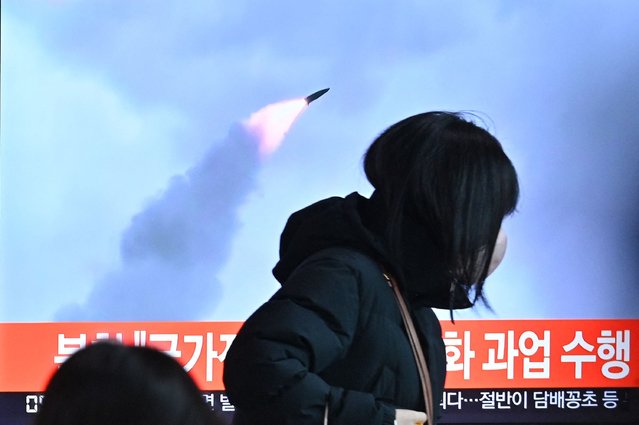 People walk past a television screen showing a news broadcast with file footage of a North Korean missile test, at a railway station in Seoul on January 11, 2022, after North Korea fired a “suspected ballistic missile” into the sea, South Korea's military said, less than a week after Pyongyang reported testing a hypersonic missile. (Photo by Anthony Wallace/AFP Photo) 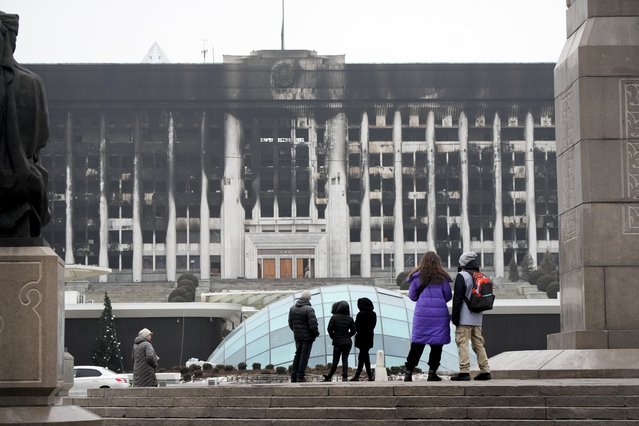 People look at the city hall building in the central square blocked by Kazakhstan troops and police in Almaty, Kazakhstan, Tuesday, January 11, 2022. Authorities in Kazakhstan say nearly 8,000 people were detained by police during protests that descended into violence last week and marked the worst unrest the former Soviet nation has faced since gaining independence 30 years ago. (Photo by AP Photo/Stringer) 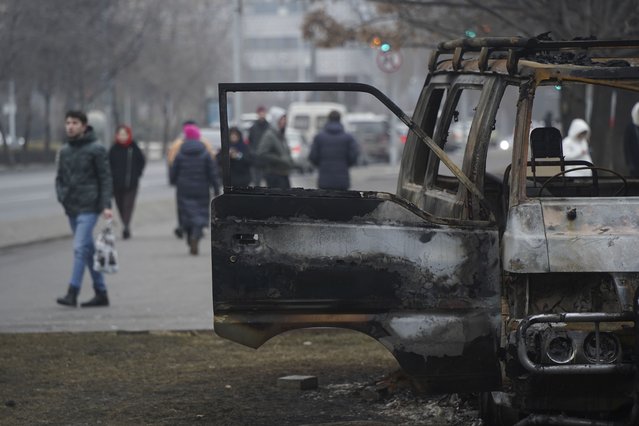 People walk past a bus, which was burned during clashes in Almaty, Kazakhstan, Tuesday, January 11, 2022. Life in Almaty, which was affected with the violence the most during protests, started returning to normal this week, with public transport resuming operation and malls reopening. (Photo by Vladimir Tretyakov/NUR.KZ via AP Photo) 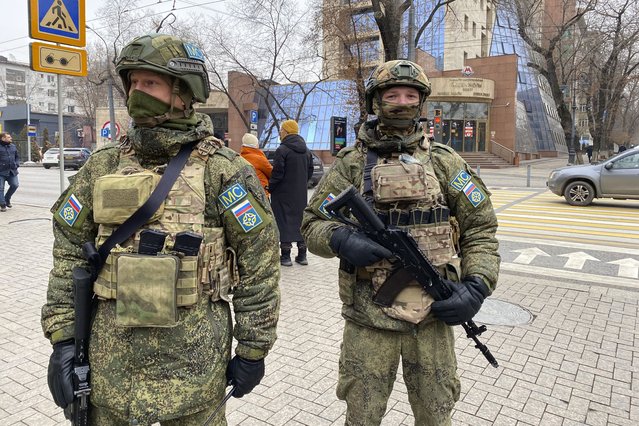 In this handout photo released by Russian Defense Ministry Press Service, Collective Security Treaty Organization peacekeepers guard an area in Almaty, Kazakhstan, Tuesday, January 11, 2022. The president of Kazakhstan has announced that a Russia-led security alliance will start pulling out its troops from the country in two days after completing its mission. The mostly Russian troops were deployed to Kazakhstan last week by the Collective Security Treaty Organization, an alliance of six former Soviet states, at the president's request amid unprecedented public unrest. (Photo by Russian Defense Ministry Press Service via AP Photo) 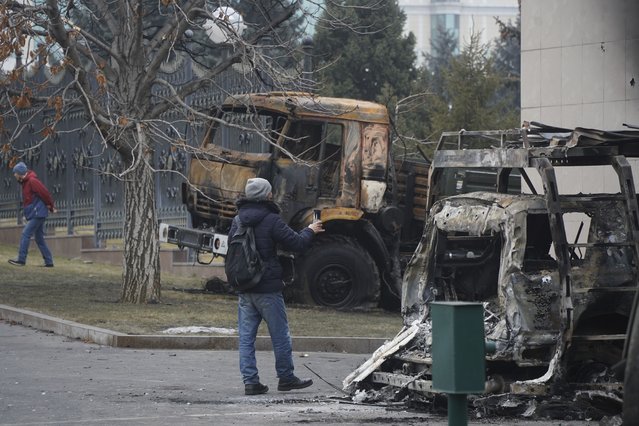 A man photographs a bus, which was burned during clashes in Almaty, Kazakhstan, Tuesday, January 11, 2022. (Photo by Vladimir Tretyakov/NUR.KZ via AP Photo) 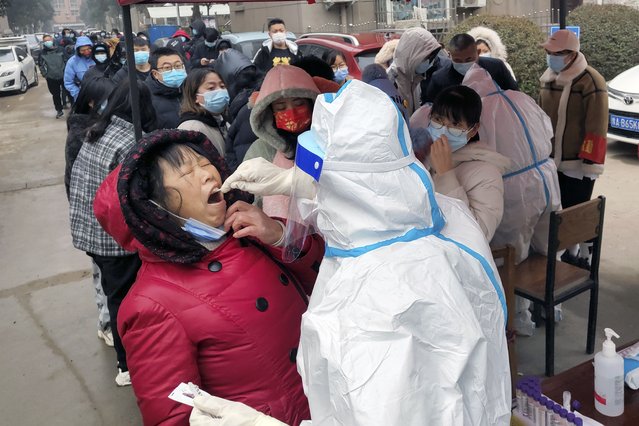 A medical worker wearing a protective suit takes swab samples for the COVID-19 test on residents in Huaxian county in central China's Henan province on Monday, January 10, 2022. A third Chinese city has locked down its residents because of a COVID-19 outbreak, raising the number confined to their homes in China to about 20 million people. (Photo by Chinatopix via AP Photo) 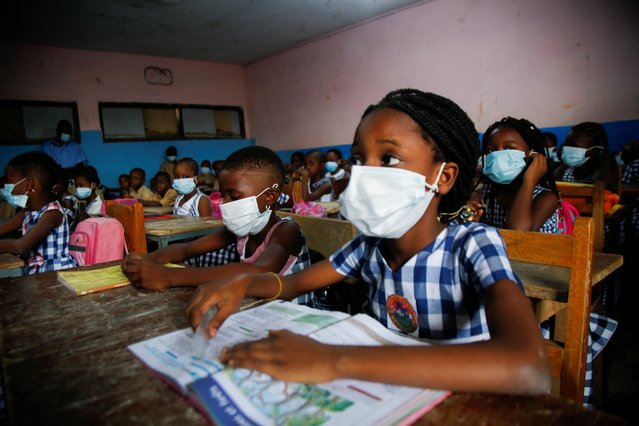 Students wearing protective masks, study in a classroom at the Merlan school in Paillet where, according to the director of the Pasteur Institut of Ivory Coast, professor Mireille Dosso, cases of the new Omicron variant of SARS-CoV-2 were detected, amid the outbreak of the coronavirus disease (COVID-19) in Abidjan, Cote d'Ivoire on January 11, 2022. (Photo by Luc Gnago/Reuters) 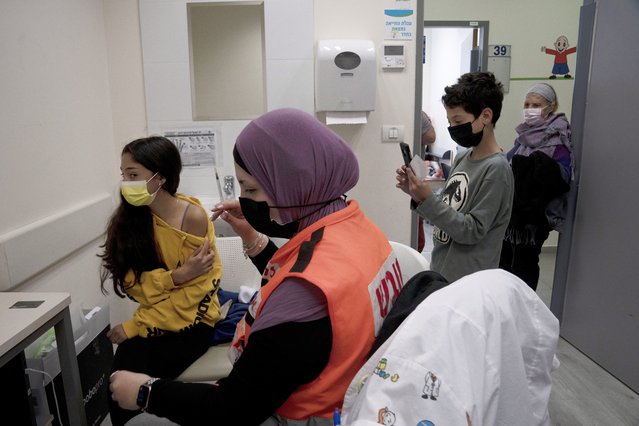 N'amah Yetzhak Abohaikal, a volunteer with the women's unit of United Hatzalah emergency service, prepares administer the COVID-19 vaccine to a teen girl as her brother and grandmother watch, at Clalit Health Services in Mevaseret Zion, Tuesday, January 11, 2022. (Photo by Maya Alleruzzo/AP Photo) 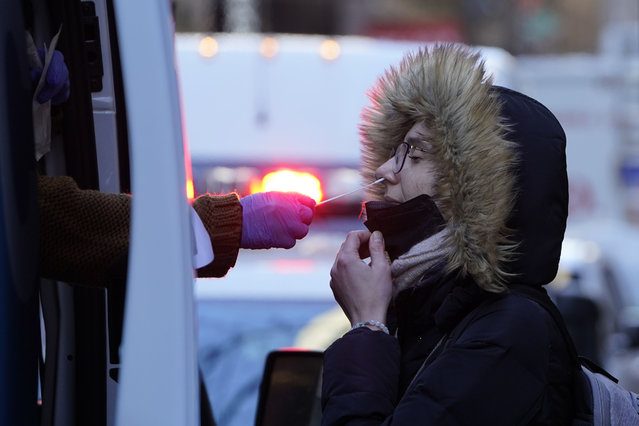 A woman wearing a winter coat gets tested for COVID-19 at a mobile testing site in New York, January 11, 2022. Scientists are seeing signals that COVID-19′s alarming omicron wave may have peaked in Britain and is about to do the same in the U.S., at which point cases may start dropping off dramatically. (Photo by Seth Wenig/AP Photo) 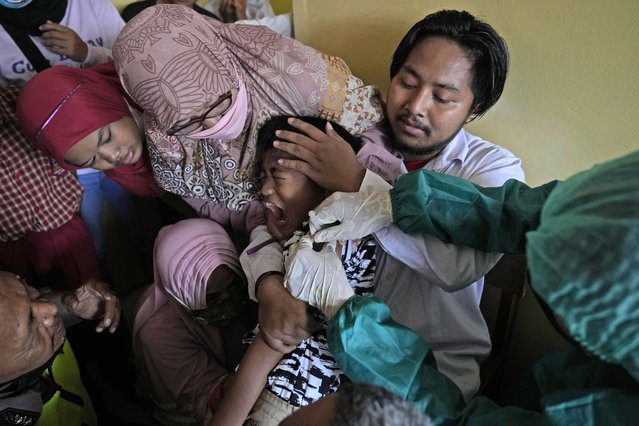 A parent, teachers and a police officer try to calm down a student as he receives a shot of Sinovac COVID-19 vaccine during a vaccination campaign run by Indonesian National Police at a school for children with special needs in Depok on the outskirt of Jakarta, Indonesia, Tuesday, January 11, 2022. (Photo by Dita Alangkara/AP Photo) 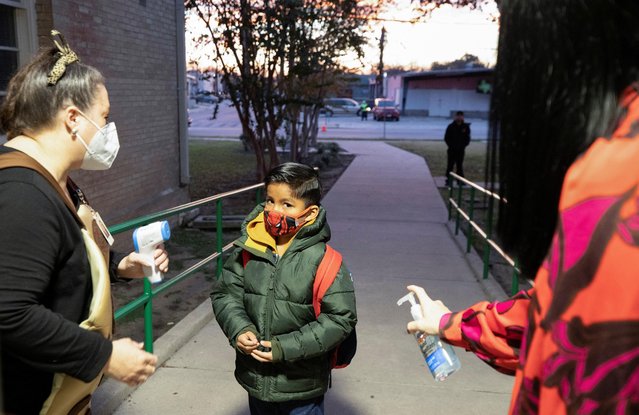 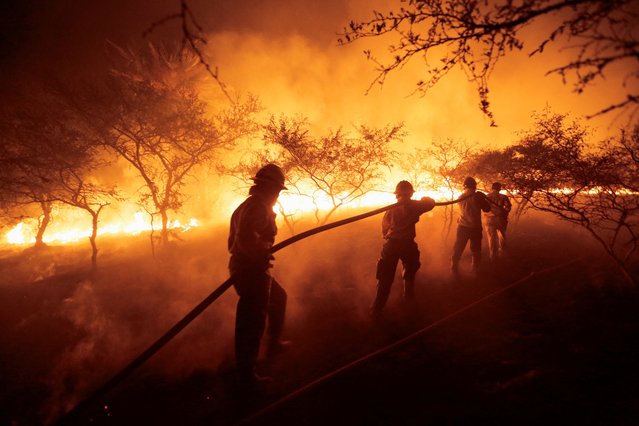 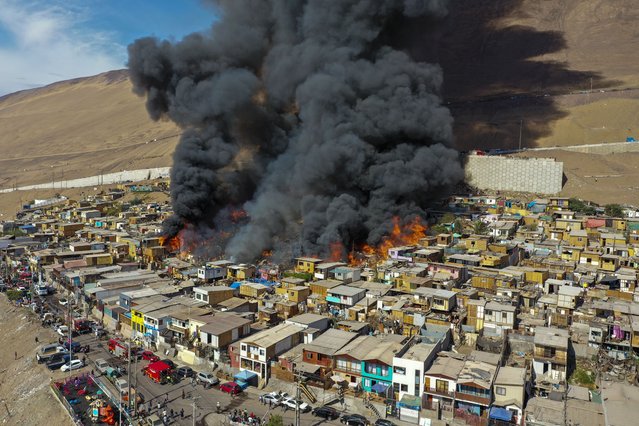 Houses burn during a fire in the low income neighborhood of Laguna Verde, in Iquique, Chile, Monday, January 10, 2022. According to authorities the fire destroyed close to 100 homes of the neighborhood which is populated mostly by migrants. (Photo by Ignacio Munoz/AP Photo) 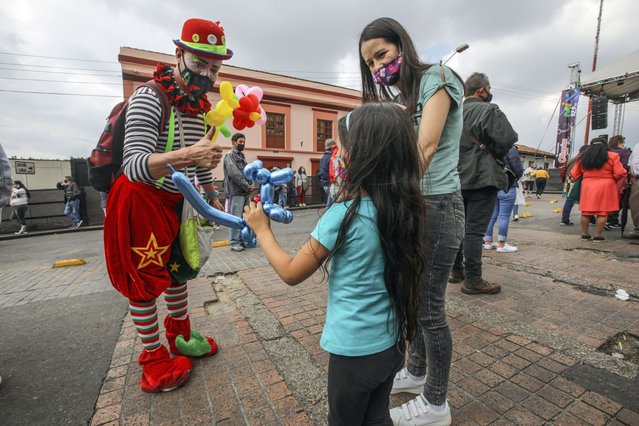 People gather to participate in the activities of the traditional “Three Kings Day” at the end of the New Year's celebrations at the Egypt neighborhood in Bogota, Colombia, January 10, 2022. (Photo by Juancho Torres/Anadolu Agency via Getty Images) 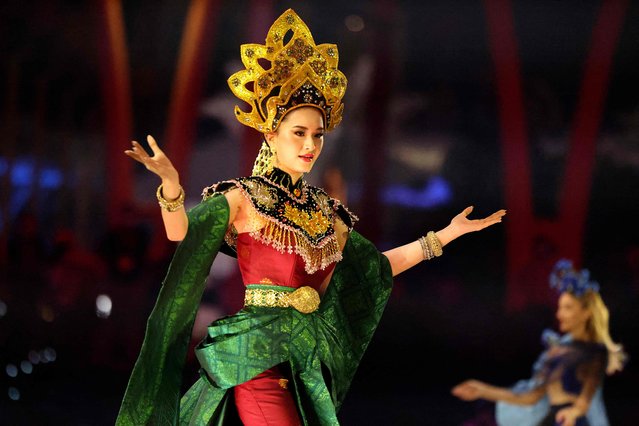 Performers walk on stage during the China Pavilion Day at the Dubai Expo 2020 on January 10, 2022 in the Gulf emirate of Dubai. (Photo by Karim Sahib/AFP Photo) 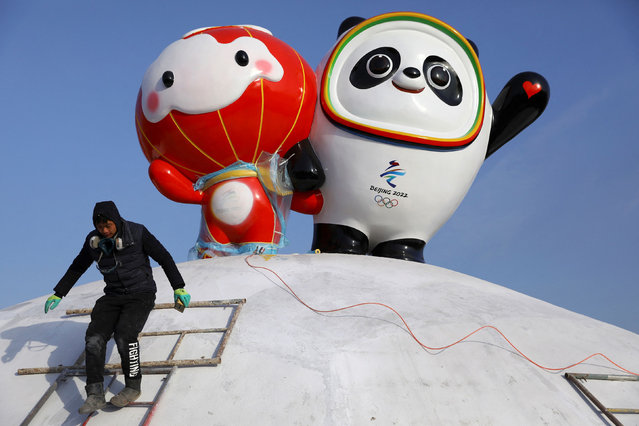 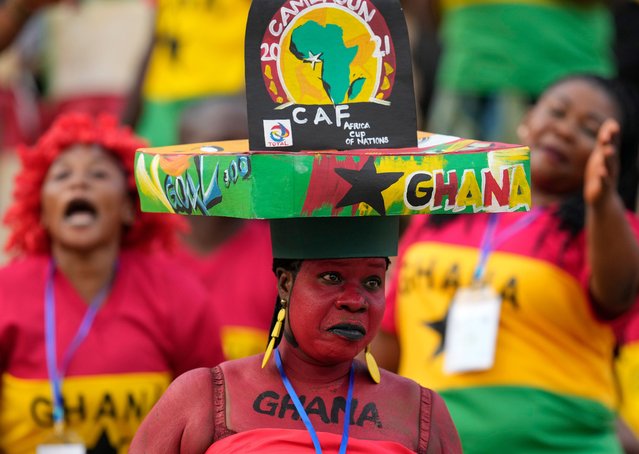 Ghana supporters during the African Cup of Nations 2022 group B soccer match between Morocco and Ghana at the Ahmadou Ahidjo stadium in Yaounde, Cameroon, Monday, January 10, 2022. (Photo by Themba Hadebe/AP Photo) 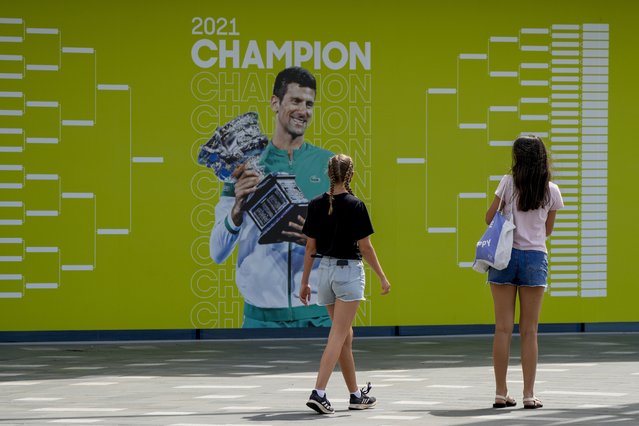 Visitors stop to take a photo of a billboard featuring defending champion Serbia's Novak Djokovic ahead of the Australian Open at Melbourne Park in Melbourne, Australia, Tuesday, January 11, 2022. The prime ministers of Australia and Serbia have discussed Novak Djokovic's precarious visa after the top-ranked Serbian tennis star won a court battle to compete in the Australian Open but still faces the threat of deportation because he is not vaccinated against COVID-19. (Photo by Mark Baker/AP Photo) 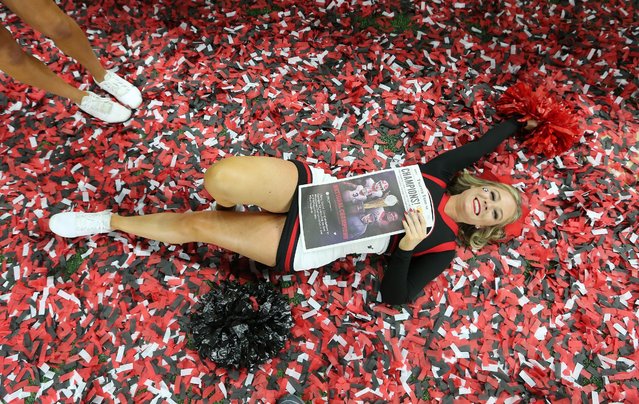