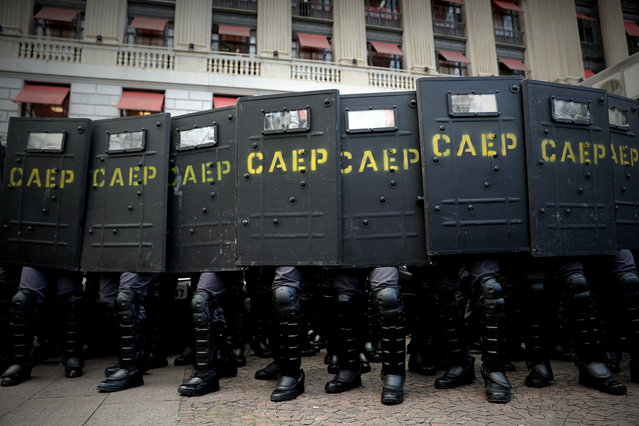 Indigenous of the Guarani ethnicity protest in front of the Attorney's Office, in Sao Paulo, Brazil, 11 January 2019. Indigenous Brazilians protested against the Brazilian president's decision to transfer the responsibilities for indigenous people's reserves to the agriculture ministry. The move has sparked concerns the reserves would be subject to interests of Brazil's powerful agrobusiness lobby. (Photo by Fernando Bizerra Jr./EPA/EFE) 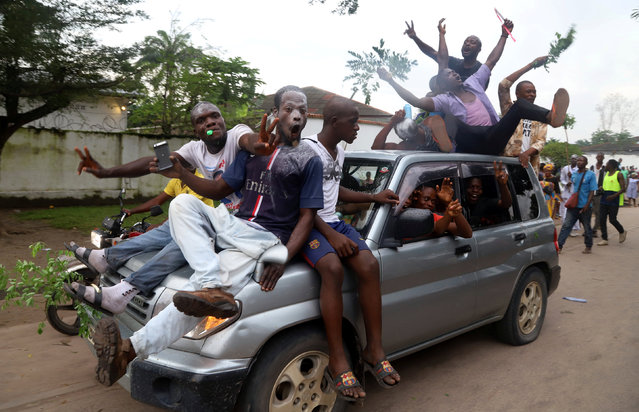 Supporters of Felix Tshisekedi, leader of the Congolese main opposition party, the Union for Democracy and Social Progress who was announced as the winner of the presidential elections; celebrate along the streets of Kinshasa, Democratic Republic of Congo, January 10, 2019. (Photo by Kenny Katombe/Reuters) 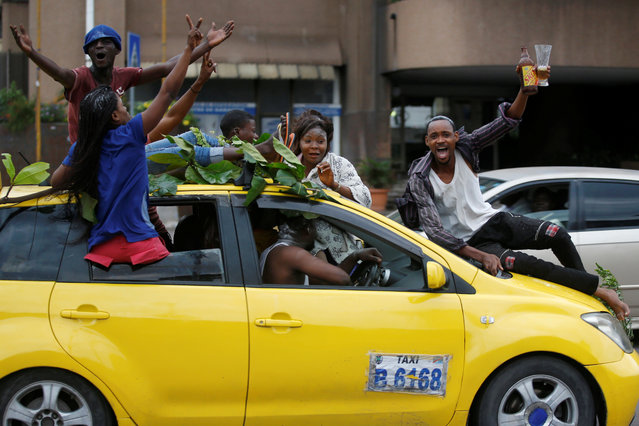 Supporters of Felix Tshisekedi, leader of the Congolese main opposition party, the Union for Democracy and Social Progress (UDPS) who was announced as the winner of the presidential elections celebrate in the streets of Kinshasa, Democratic Republic of Congo on January 10, 2019. (Photo by Baz Ratner/Reuters) 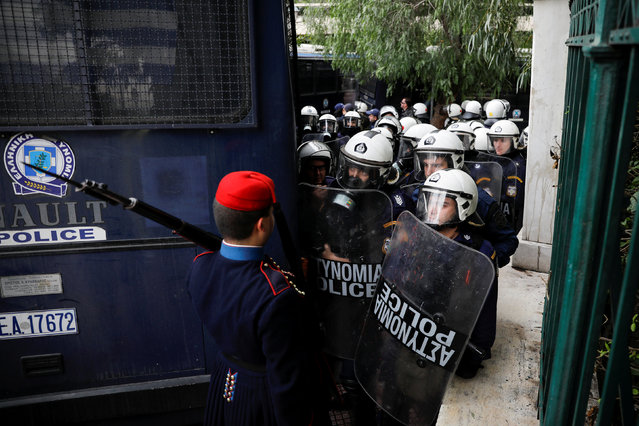 A Greek Presidential Guard returning to his barracks following his sentry duty, stands in front of riot police officers blocking the road leading to the Prime Minister's office during a demonstration of Greek school teachers against government plans to change hiring procedures in the public sector in Athens, Greece, January 11, 2019. (Photo by Alkis Konstantinidis/Reuters) 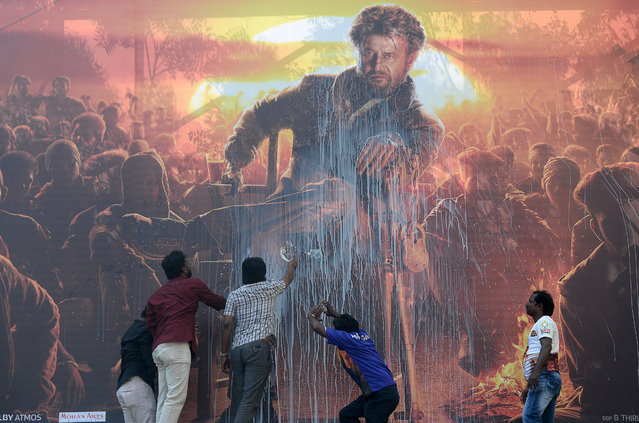 Indian fans spray milk on a billboard displaying the picture of Bollywood star Rajinikanth, in a celebratory gesture intended to bless their favourite film star's new movie, before attending the show of the new Tamil-language film “Pettai” in Chennai on January 10, 2019. Cow's milk is considered a purifying force for many in Hindu-majority India, where the animals are revered as holy, and is often used in religious ceremonies to bless statues of deities. (Photo by Arun Sankar/AFP Photo) 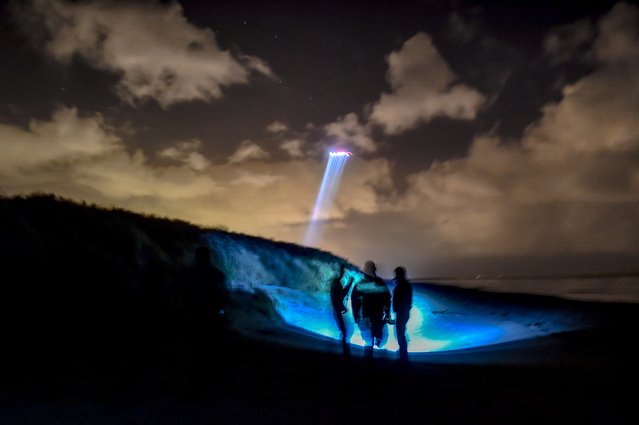 French gendarmes patrol while a police helicopter fly over the beach of Oye-Plage, near Calais, northern France, on January 9, 2019 as they try to intercept migrants attempting to cross the Channel. The number of migrants attempting to cross the Channel, one of the world's busiest shipping lanes, rose to 504 last year, up from a mere 13 in 2017. (Photo by Philippe Huguen/AFP Photo) 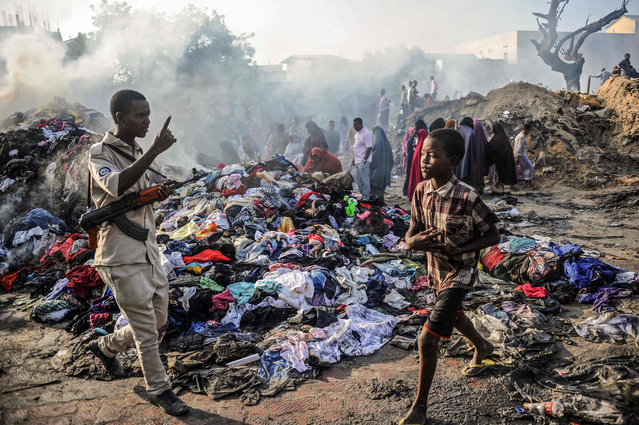 A police officer speaks to a boy beside remains of cloths after a fire broke overnight in Mogadishu's biggest market, the Bakara Market, on January 11, 2019. (Photo by Mohamed Abdiwahab/AFP Photo) 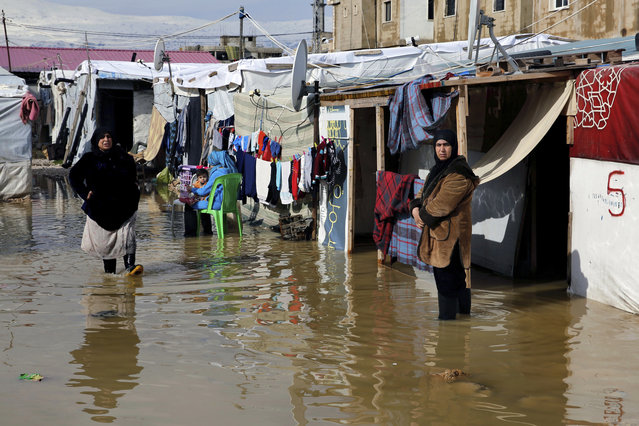 Syrian refugees stand in a pool of mud and rain water at a refugee camp, in the town of Bar Elias, in the Bekaa Valley, Lebanon, Thursday, January 10, 2019. A storm that battered Lebanon for five days displaced many Syrian refugees after their tents got flooded with water or destroyed by snow. (Photo by Bilal Hussein/AP Photo) 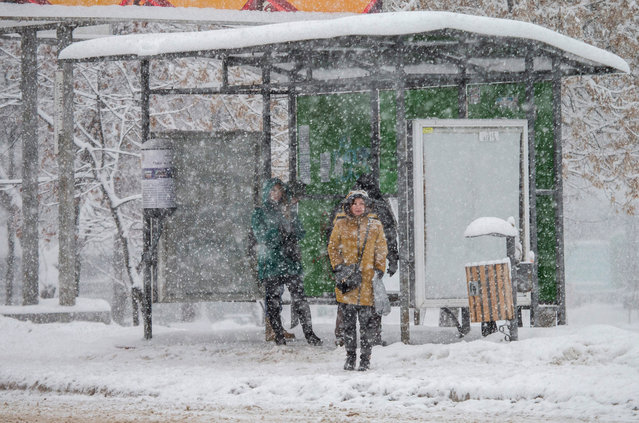 People wait for a transport at the bus station during heavy snowfall in downtown Chisinau, Moldova, 11 January 2019. (Photo by Dumitru Doru/EPA/EFE) 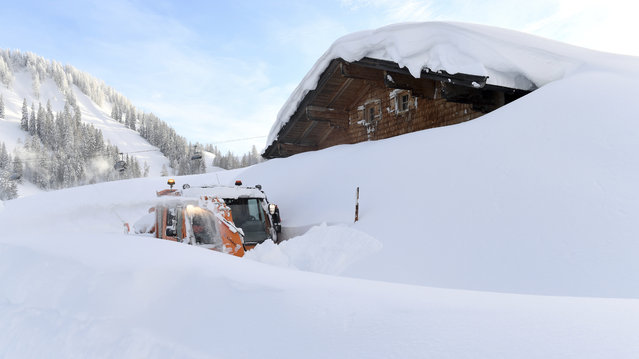 A snow blower is seen on the Loferer Alp in Lofer, Austrian province of Salzburg, Friday, January 11, 2019. In Salzburg, all parks, public gardens, play areas and cemeteries were closed on Friday because of the danger of trees falling under the weight of snow. (Photo by Kerstin Joensson/AP Photo) 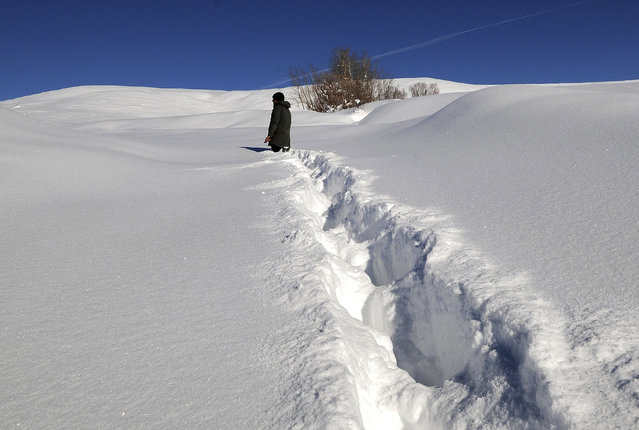 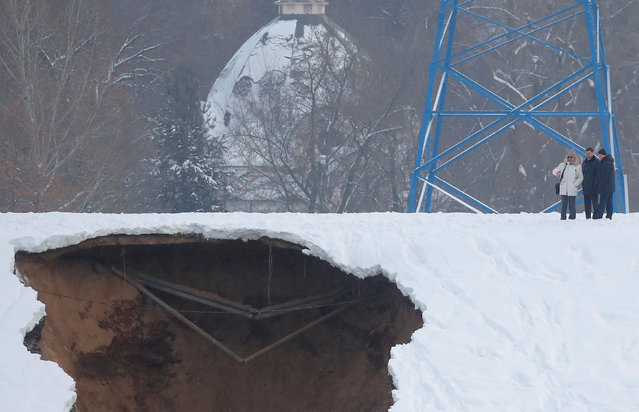 A view shows a sinkhole, which reportedly caused a flood in a traffic tunnel in Moscow, Russia on January 10, 2019. (Photo by Maxim Shemetov/Reuters) 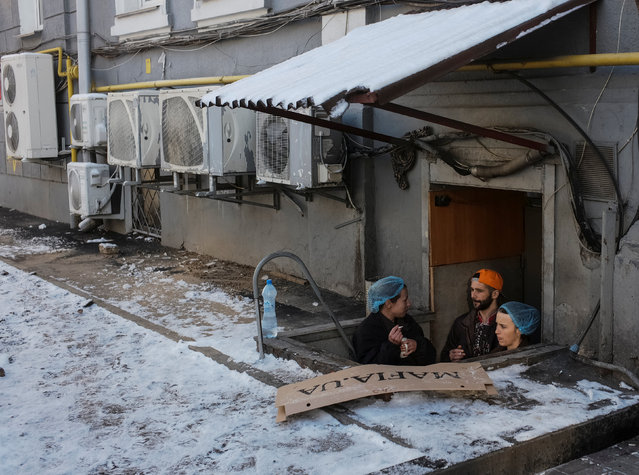 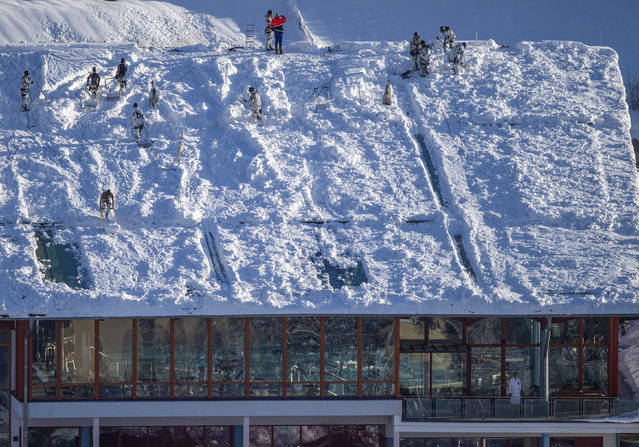 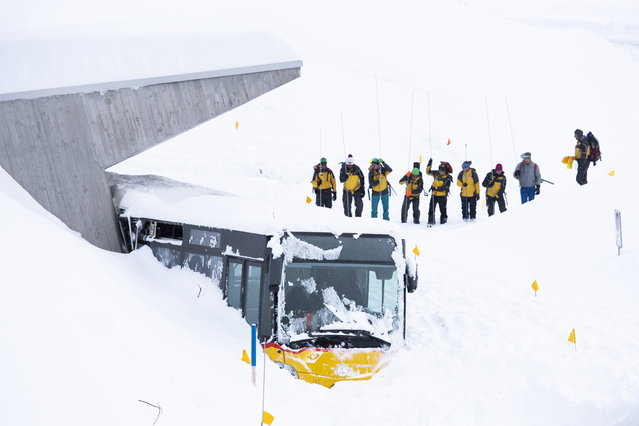 A bus caught by an avalanche next to Hotel Saentis, with search-and-rescue workers, on the Schwaegalp, Switzerland, in Hundwil, Switzerland, 11 January 2019. According to local police, an avalanche has hit the the hotel “Saentis” on 10 January afternoon, burrying cars and part of the restaurant. Several people were injured, the report stated. (Photo by Gian Ehrenzeller/EPA/EFE) 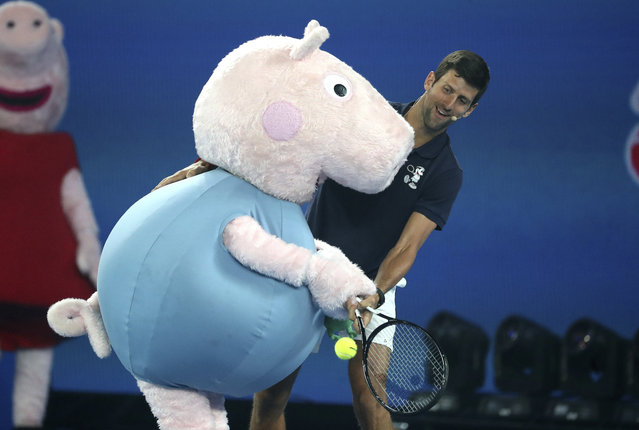 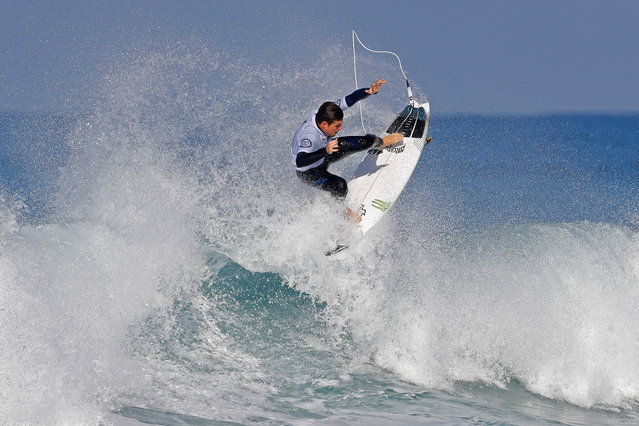 Surfer Luis Diaz of the Canary Island rides a wave during the Men's QS 3,000 of the World Surf League SEAT Pro Netanya qualification, on January 10, 2019, in the Israeli coastal city of Netanya. (Photo by Jack Guez/AFP Photo)) 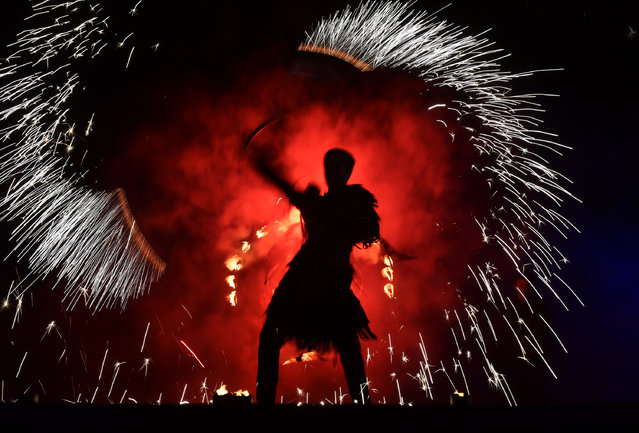 An actor performs a fire show during the “Christmas Star” light show in downtown Saint Petersburg on January 8, 2019. (Photo by Olga Maltseva/AFP Photo) 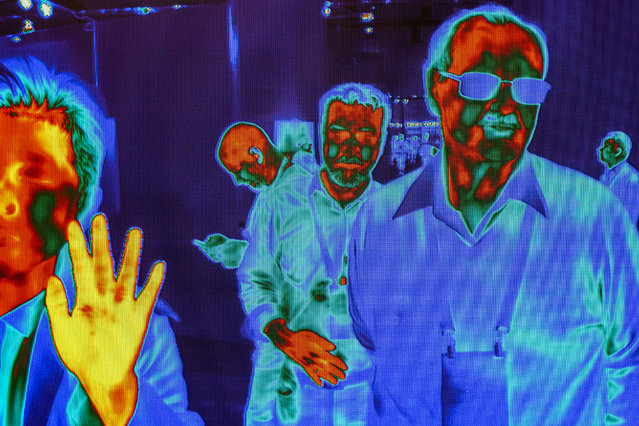