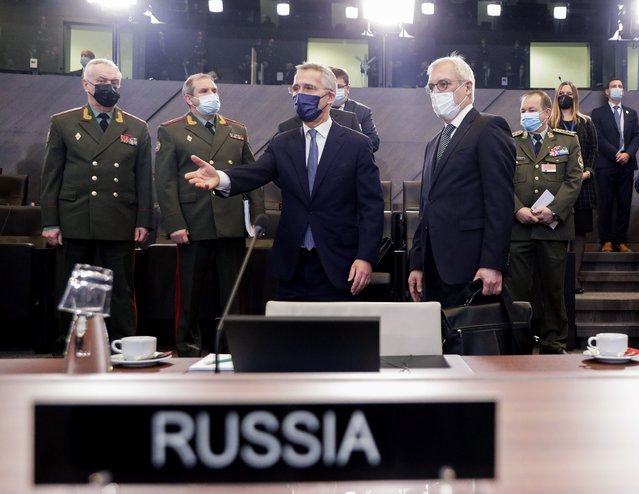 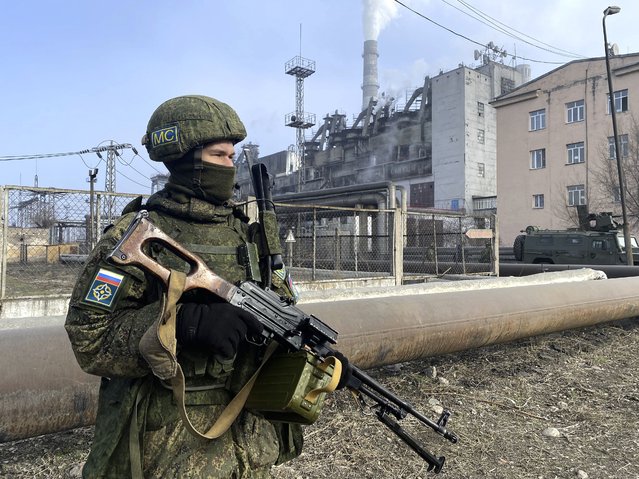 In this photo released by the Russian Defense Ministry Press Service, A Russian peacekeeper of the Collective Security Treaty Organization guards an area at Kazakhtelecom office in Almaty, Kazakhstan, Wednesday, January 12, 2022. The president of Kazakhstan has announced that a Russia-led security alliance will start pulling out its troops from the Central Asian country in two days after completing its mission. The mostly Russian troops were deployed to Kazakhstan last week by the Collective Security Treaty Organization, an alliance of six former Soviet states, at the president's request amid unprecedented public unrest. (Photo by Russian Defense Ministry Press Service via AP Photo) Israeli police detain a man as Bedouins protest in the southern Israeli village of Sa’we al-Atrash in the Neguev Desert against an afforestation project by the Jewish National Fund (JNF), on January 12, 2022. Israel's government today sought to ease tensions with Bedouins over a controversial tree-planting project in the Negev desert, following days of unrest that marked the latest test for the fragile coalition (Photo by Ahmad Gharabli/AFP Photo) 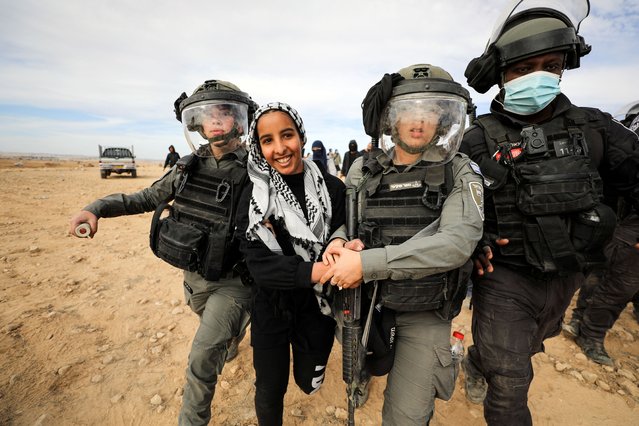 A Bedouin woman reacts as she is detained by Israeli security forces during a protest against forestation at the Negev desert village of Sawe al-Atrash, southern Israel January 12, 2022. (Photo by Ammar Awad/Reuters) 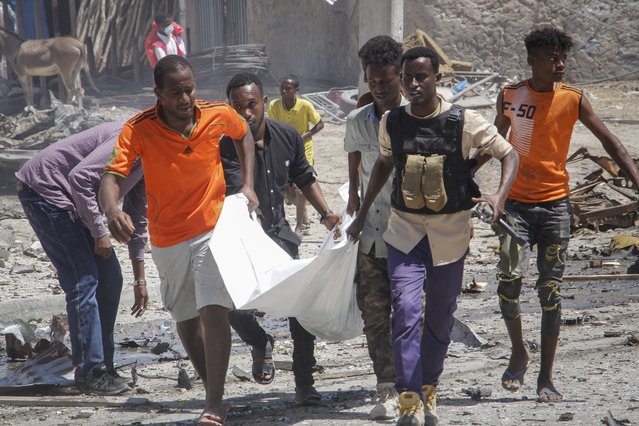 Rescuers carry away the body of a civilian who was killed in a blast in Mogadishu, Somalia, Wednesday, January 12, 2022. A large explosion was reported outside the international airport in Somalia's capital on Wednesday and an emergency responder said there were deaths and injuries. (Photo by Farah Abdi Warsameh/AP Photo) 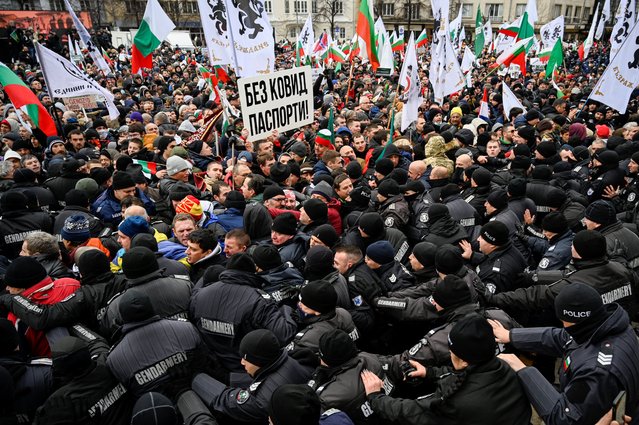 Around 2,000 protesters, who don't wear masks or adhere to social distancing, push against police cordons as they try to enter Bulgaria's parliament building during a demonstration organised by the nationalist Vazrazhdane political party, which is pushing for the abolition of the Covid-19 health pass in Sofia, on January 12, 2022. Bulgaria has the lowest vaccination rate in the European Union, with experts blaming hesitancy on low trust in the authorities and widespread conspiracy theories, as the country registered on January 12, 2022, a daily record of 7,062 new infections. (Photo by Nikolay Doychinov/AFP Photo) 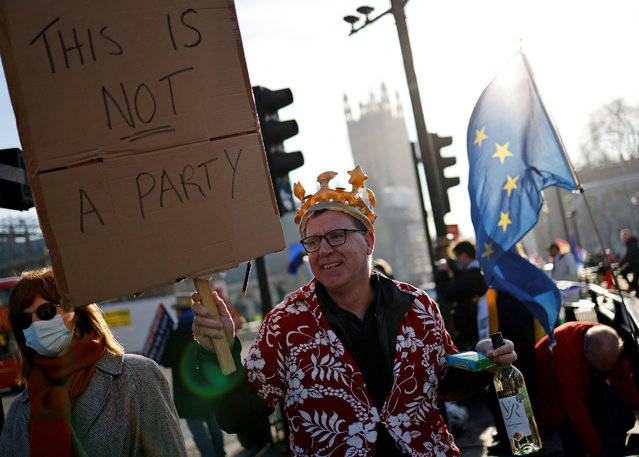 Demonstrators hold placards as they protest near the House of Commons, where Britain's Prime Minister was taking part in the weekly session of Prime Minister Questions (PMQs) in central London on January 12, 2022. British Prime Minister Boris Johnson on Wednesday said sorry after admitting he attended a lockdown-breaching party in Downing Street, but deflected opposition demands for his resignation. Johnson told parliament that millions of Britons had made “extraordinary sacrifices” during the first Covid lockdown in 2020 and while the party appeared to him to be a work event, he issued “heartfelt apologies”. (Photo by Tolga Akmen/AFP Photo) 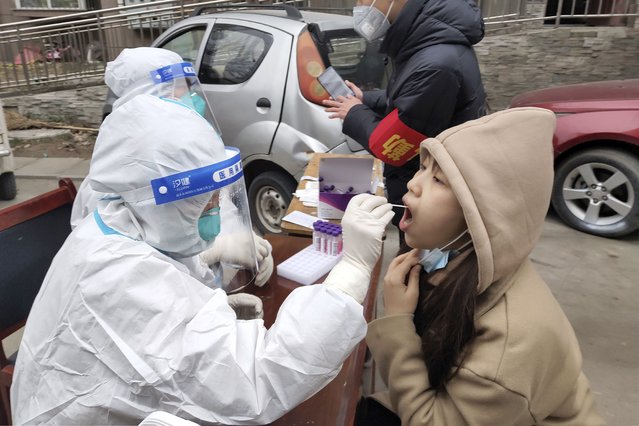 Workers collect sample from a resident during a third round of COVID-19 tests in Huaxian county in central China's Henan province Wednesday, January 12, 2022. Millions of Chinese are under lockdown in cities under the strict “dynamic zero-case policy” that has allowed China to largely contain major outbreaks, although at considerable cost to local economies. (Photo by Chinatopix via AP Photo) 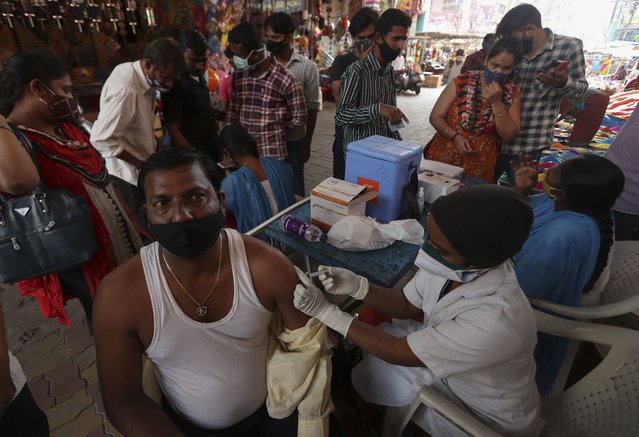 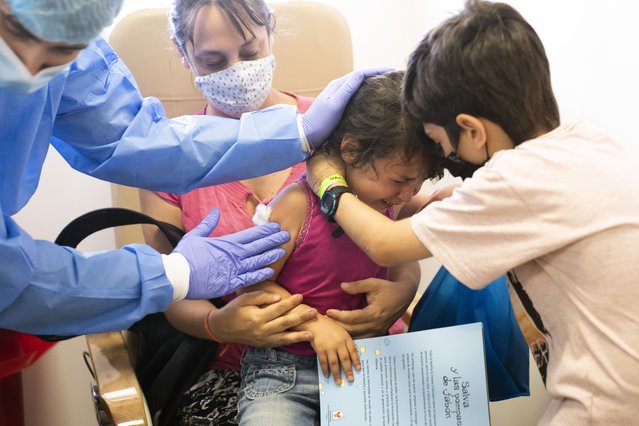 A brother comforts his sister after she was injected with a dose of the Pfizer COVID-19 vaccine on the first day of a vaccination campaign targeting children 5-11, at the Pereira Rossell Hospital in Montevideo, Uruguay, Wednesday, January 12, 2022. (Photo by Matilde Campodonico/AP Photo) 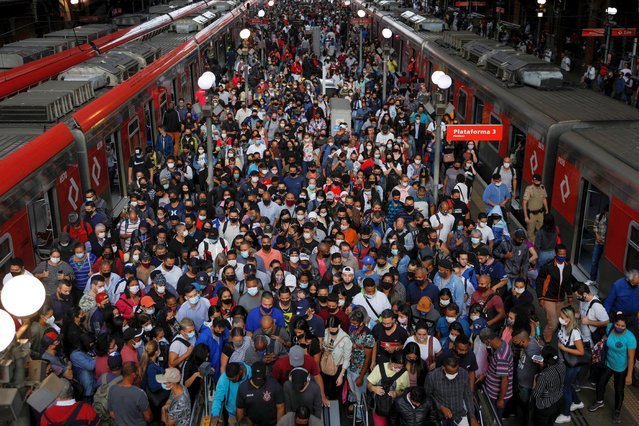 People walk after disembarking from a train at Luz station amid the outbreak of the coronavirus disease (COVID-19) and after Omicron has become the dominant coronavirus variant in the country, in Sao Paulo, Brazil on January 12, 2022. (Photo by Amanda Perobelli/Reuters) 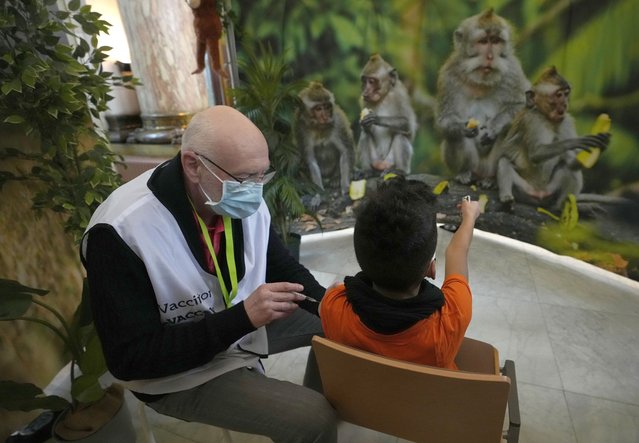 A young boy is administered a COVID-19 vaccine while he shines a light on photos of monkeys at the Antwerp Zoo in Antwerp, Belgium, Wednesday, January 12, 2022. In an effort to make children more at ease in getting their vaccine, specially designed safari tents with photos of zoo animals have been installed to provide a more private setting with a vaccinator. Once they have received the vaccine, children and parents can stroll through the greenhouse and visit the monkey enclosure. (Photo by Virginia Mayo/AP Photo) 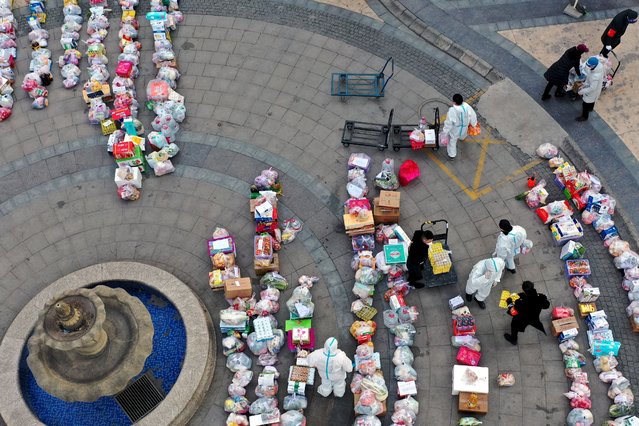 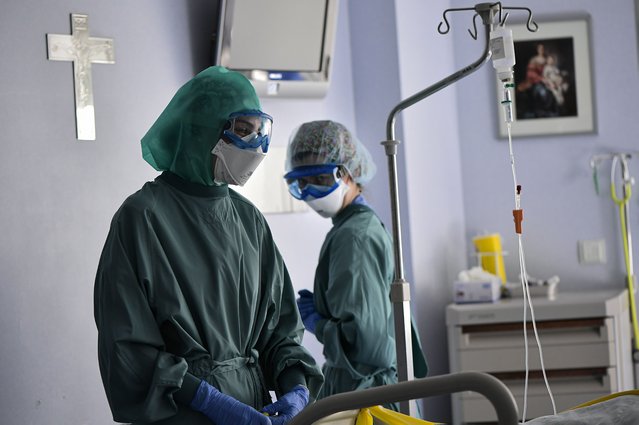 Members of the medical team attend to a patient with coronavirus, in the ICU department of the Clinica Universitaria, in Pamplona, northern Spain, Wednesday, January 12, 2022. Spain’s medical community has scored a victory after a court ordered that a regional government compensate doctors with up to 49,000 euros ($56,000) for having to work without personal protection suits during the devastating early months of the pandemic. (Photo by Alvaro Barrientos/AP Photo) 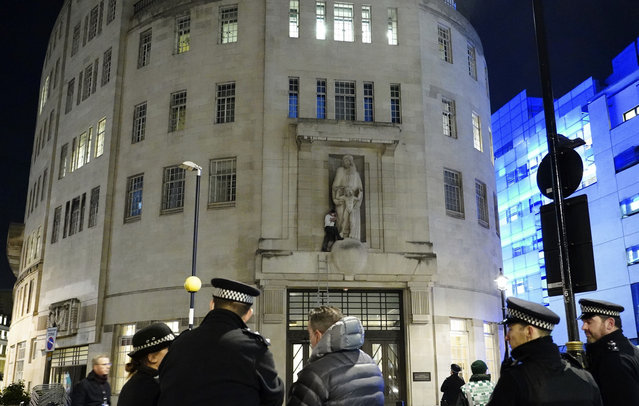 A man, after climbing a ladder, stands next to the statue of Prospero and Ariel from Shakespeare's play The Tempest by the sculptor Eric Gill outside the BBC's Broadcasting House in central London, Wednesday January 12, 2022. British police have cordoned off an area outside the BBC in central London after a man was spotted scaling the building and using a hammer to attack a statue by controversial sculptor Eric Gill. (Photo by Ian West/PA Wire via AP Photo) 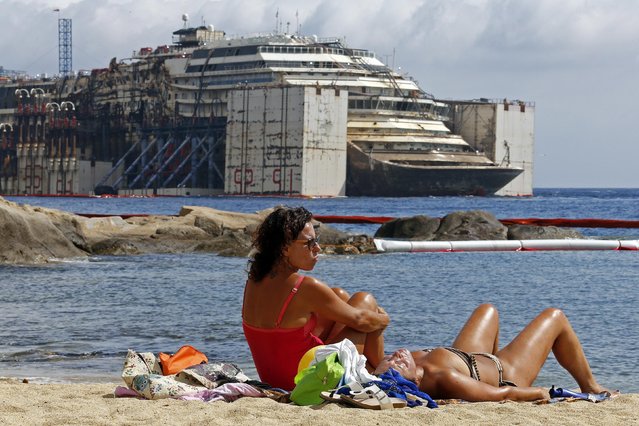 People sunbathe as the Costa Concordia cruise liner is seen during its refloating operation at Giglio harbour July 21, 2014. The massive hulk of the Costa Concordia is nearly ready to be towed away from the Italian island where it struck a rock and capsized two-and-a-half years ago, killing 32 people, officials said on Sunday. Italy on Thursday, Jan. 13, 2022, is marking the 10th anniversary of the Concordia disaster with a daylong commemoration, honoring the 32 people who died but also the extraordinary response by the residents of Giglio who took in the 4,200 passengers and crew from the ship on that rainy Friday night and then lived with the Concordia carcass for another two years before it was hauled away for scrap. (Photo by Giampiero Sposito/Reuters) 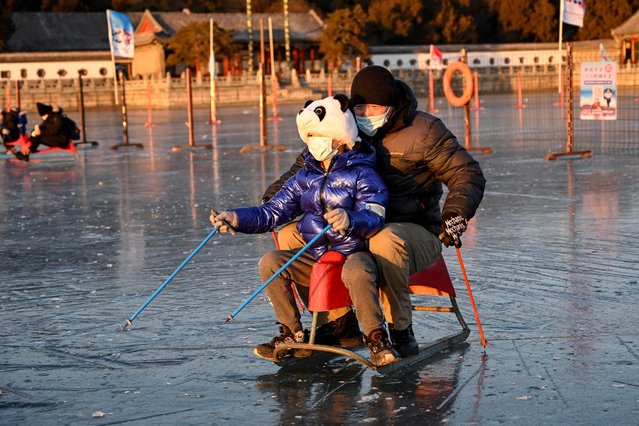 People skate on a frozen lake at the Summer Palace in Beijing on January 12, 2022. (Photo by Jade Gao/AFP Photo) 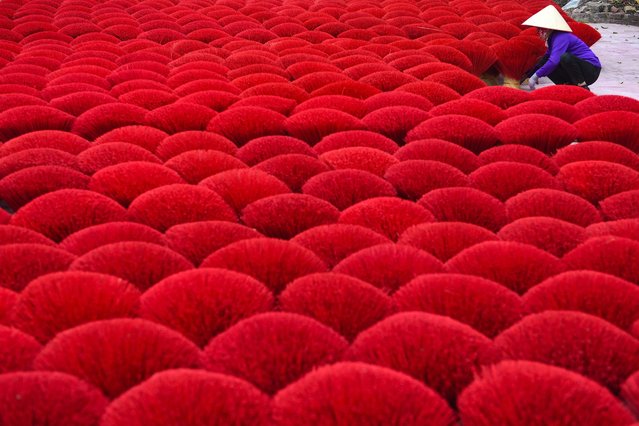 A worker collects dried incense sticks in a courtyard in Quang Phu Cau village on the outskirts of Hanoi on January 12, 2022, ahead of Lunar New Year celebrations, known in Vietnam as Tet. (Photo by Nhac Nguyen/AFP Photo) 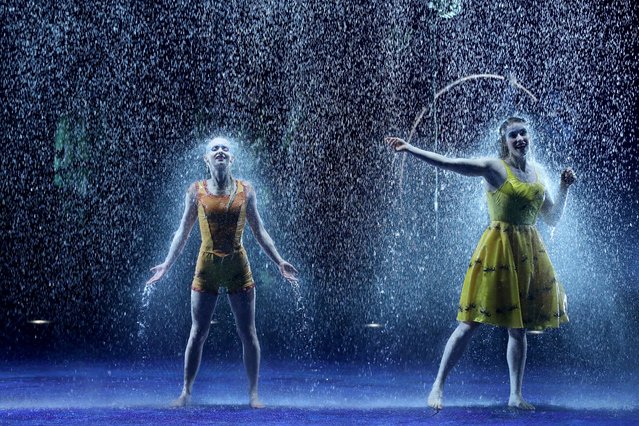