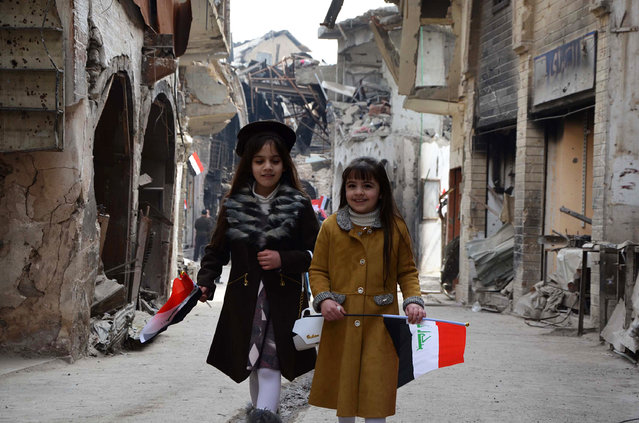 Iraqi girls walk holding their national flag towards a ceremony for the re-opening of the Bab al-Saray market in the old city of Mosul on January 11, 2018. (Photo by Ahmad Muwafaq/AFP Photo) 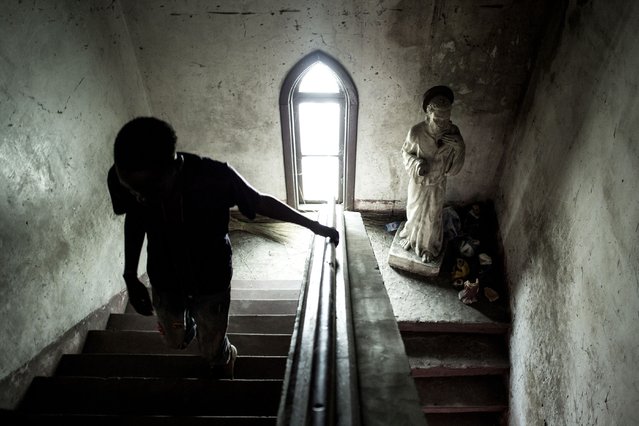 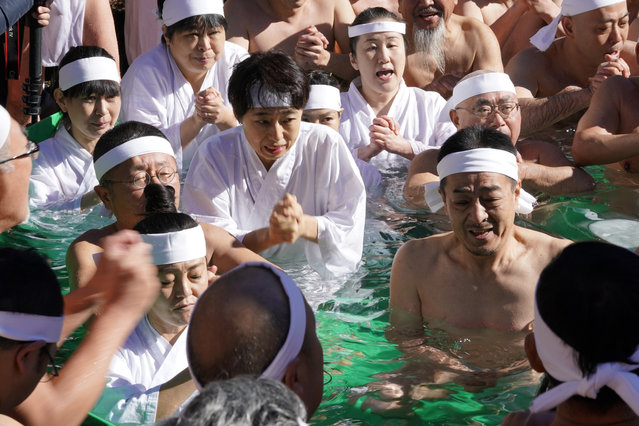 Japanese bathers pray for the healthy new year while dipping in a cold water tub with blocks of ice at a Teppozu Inari Shinto Shrine during a winter ritual in Tokyo, Sunday, January 14, 2018. (Photo by Shizuo Kambayashi/AP Photo) 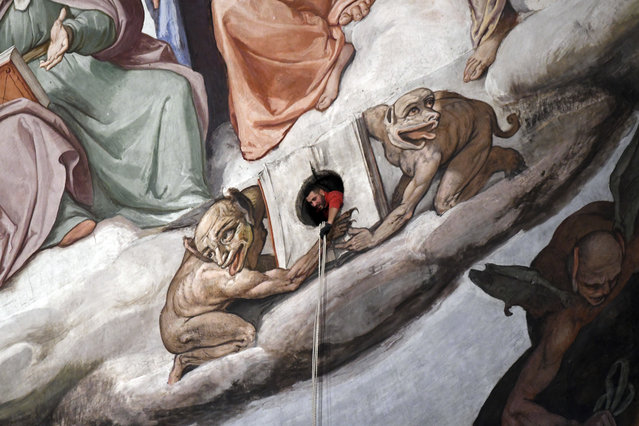 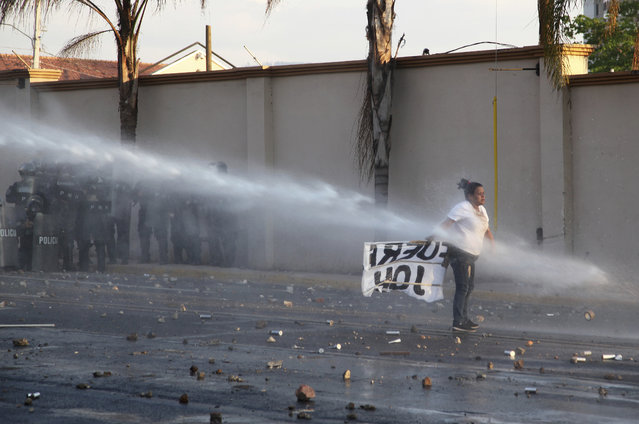 A supporters of opposition presidential candidate Salvador Nasralla is hit by a jet of water near the Presidential House in Tegucigalpa, Honduras, Friday, January 12, 2018. Following a disputed election marred by irregularities, incumbent President Juan Orlando Hernandez was declared the victor and will be inaugurated on Jan. 27. The opposition does not recognize Hernandez's victory and are protesting against the result. (Photo by Fernando Antonio/AP Photo) 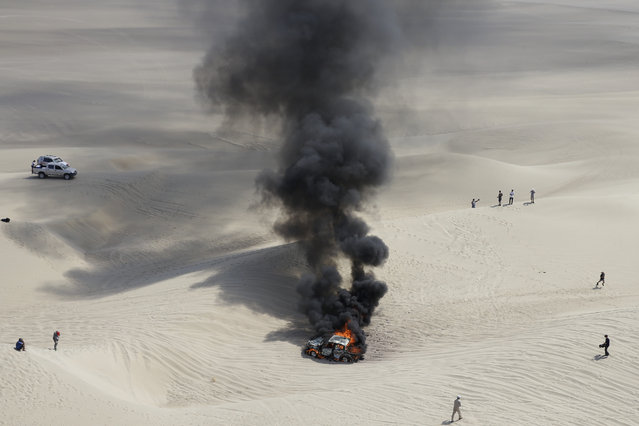 The Toyota of driver Alicia Reina and co-driver Carlos Dante Pelayo, both of Argentina, burns after catching fire during the third stage of the 2018 Dakar Rally in Pisco, Peru, Monday, January 8, 2018. (Photo by Ricardo Mazalan/AP Photo) 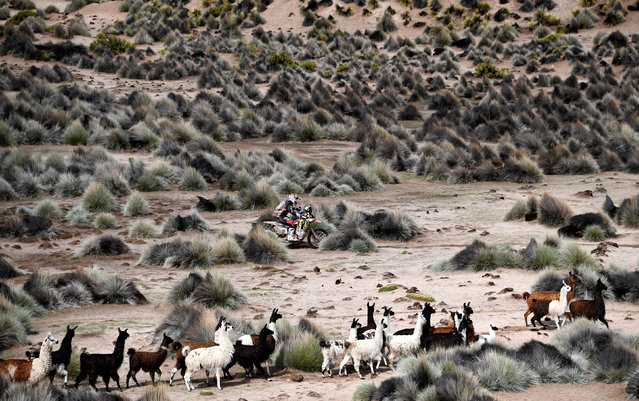 French president Emmanuel Macron (R) and his wife Brigitte (C) cut slices of a traditional epiphany cake during a ceremony at the Elysee palace, on January 12, 2018 in Paris. (Photo by Christophe Archambault/AFP Photo) 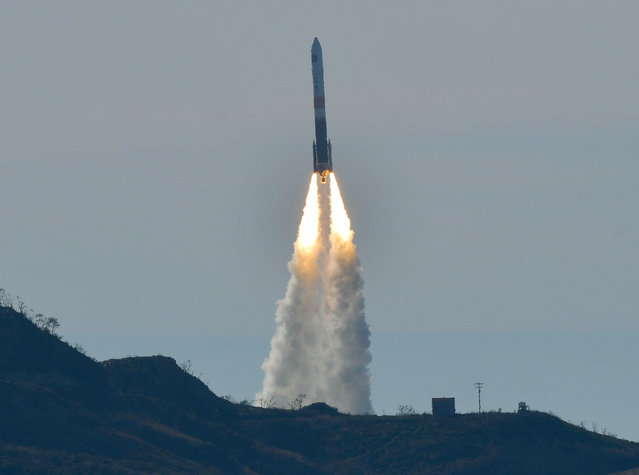 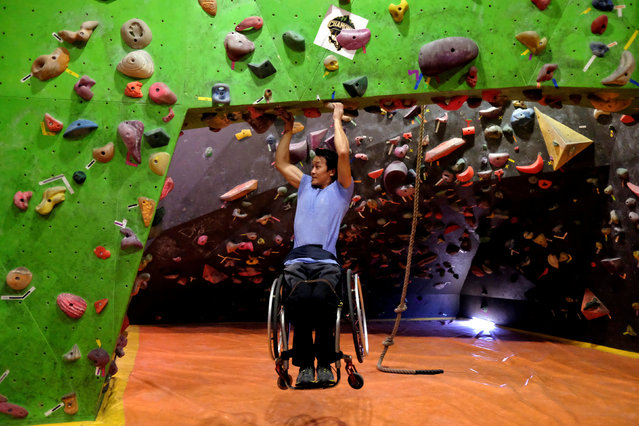 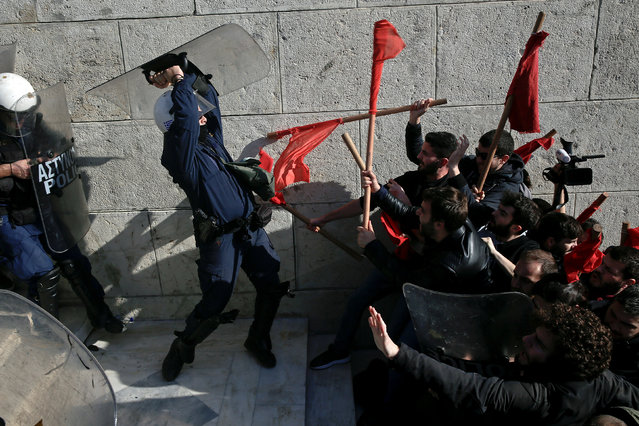 Protesters clash with riot police during a demonstration outside the parliament building against planned government reforms in Athens, Greece January 12, 2018. (Photo by Alkis Konstantinidis/Reuters) 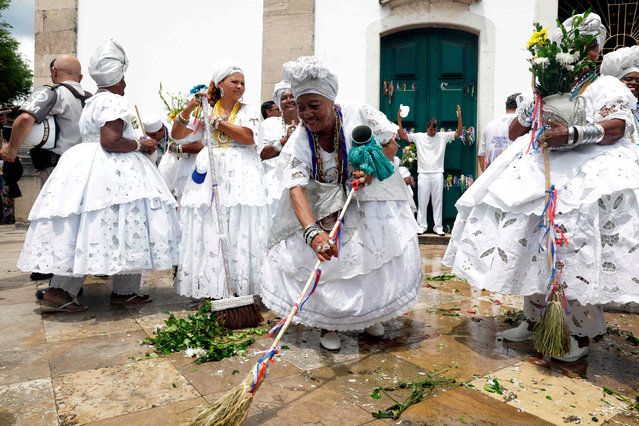 Hundreds of believers participate in the traditional pre- carnival event “Lavagem das Escadarias Bonfim” – a symbolic washing of the stairs of the Bonfim Church by practitioners of Catholicism and Afro- Brazilian religions – in the city of Salvador, Bahia, Brazil, on January 11, 2018. (Photo by Lucio Tavora/AFP Photo) 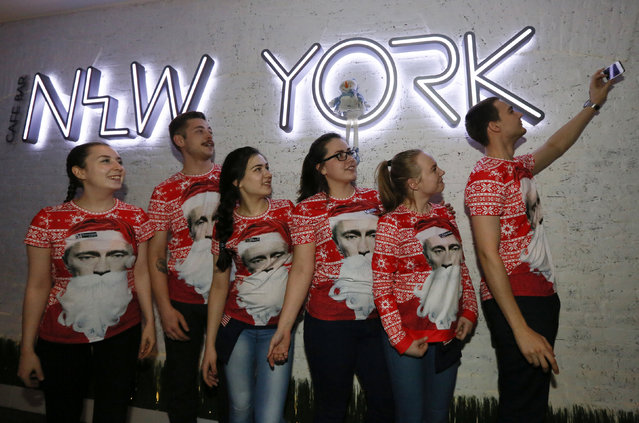 Waiters, marking the holiday season and wearing T-shirts with an image of Russian President Vladimir Putin dressed as Santa Claus, pose for a picture at the “New York” coffee bar in central Krasnoyarsk, Russia January 12, 2018. (Photo by Ilya Naymushin/Reuters) 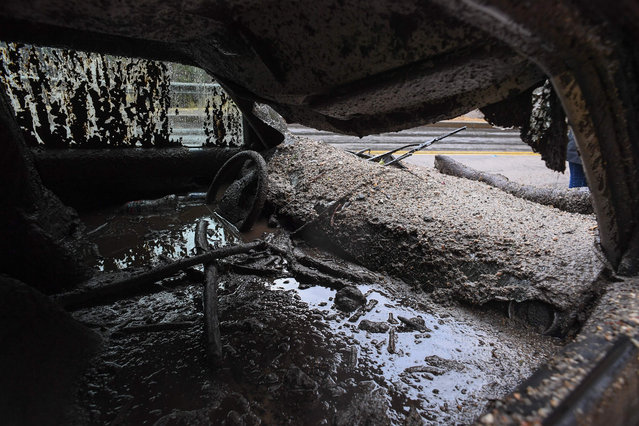 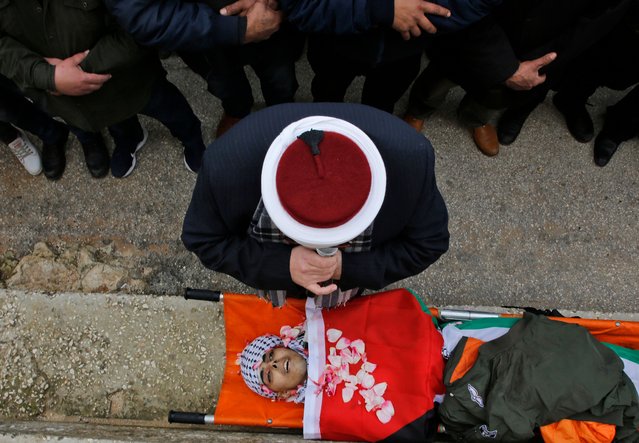 A Palestinian Sheikh mourns over the body of Ali Omar Qino, 16, during his funeral in the village of Burin, in the Israeli-occupied West Bank, on January 12, 2018. Two Palestinian teenagers were shot dead in clashes with Israel's military the previous, Palestinian officials said, amid tensions over US President Donald Trump's recent Jerusalem declaration and a deadly gun attack. (Photo by Jaafar Ashtiyeh/AFP Photo) 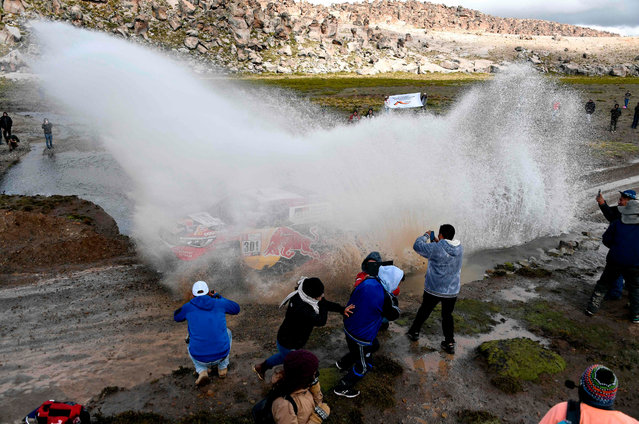 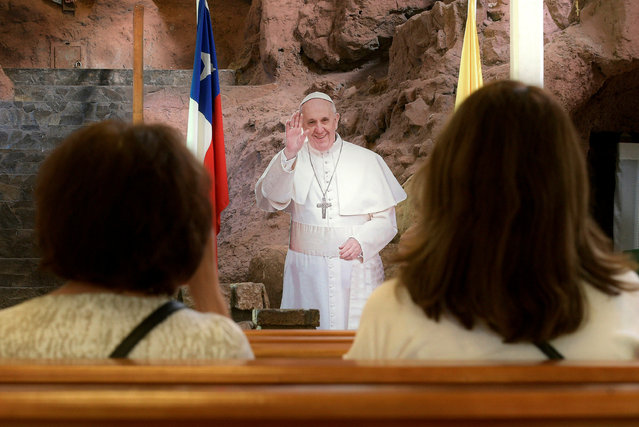 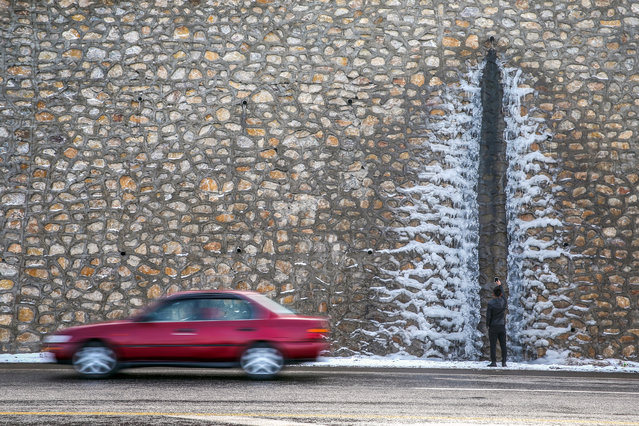 Water on retaining wall iced up due to the freezing cold, during winter in Van, Turkey on January 11, 2018. (Photo by Ozkan Bilgin/Anadolu Agency/Getty Images) 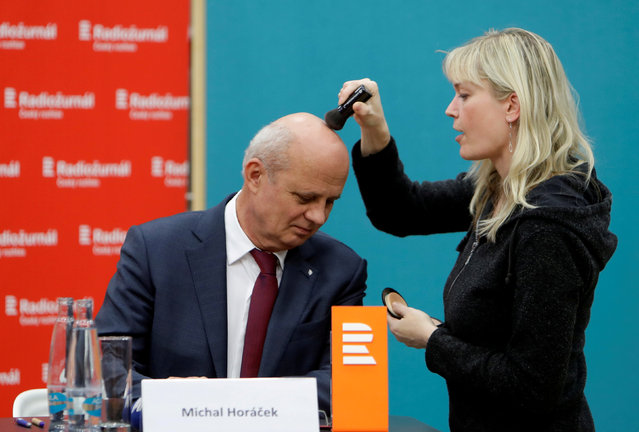 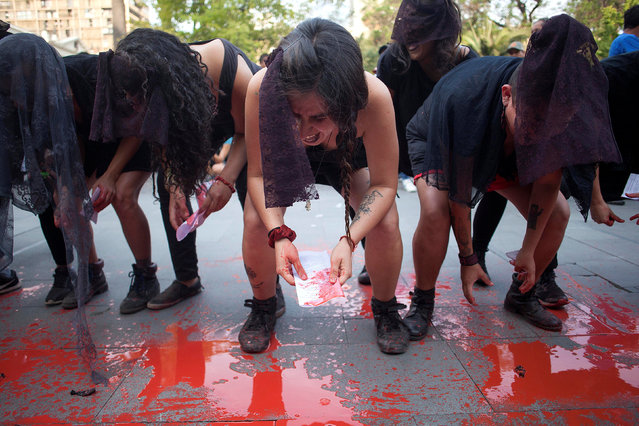 Demonstrators shout slogans in front of the Cathedral of Santiago to protest against the upcoming visit of Pope Francis, in Santiago, Chile January 12, 2018. (Photo by Cristobal Saavedra Vogel/Reuters) 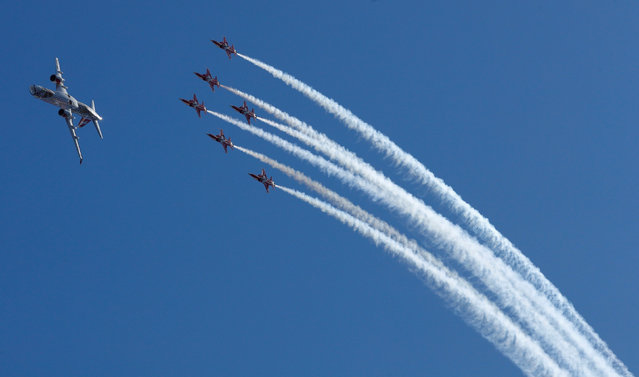 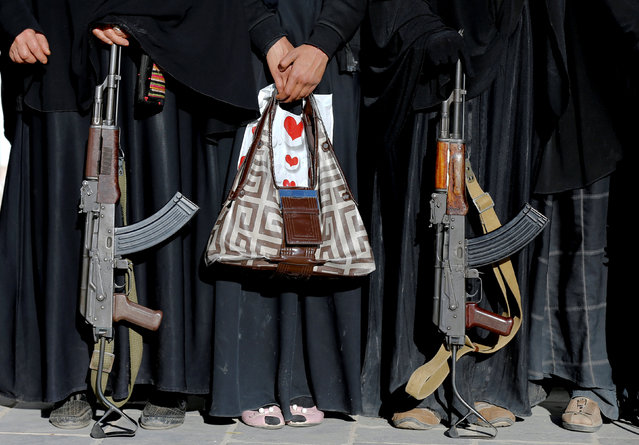 Armed women attend a rally to show support to the Houthi movement in Sanaa, Yemen January 13, 2018. (Photo by Khaled Abdullah/Reuters) 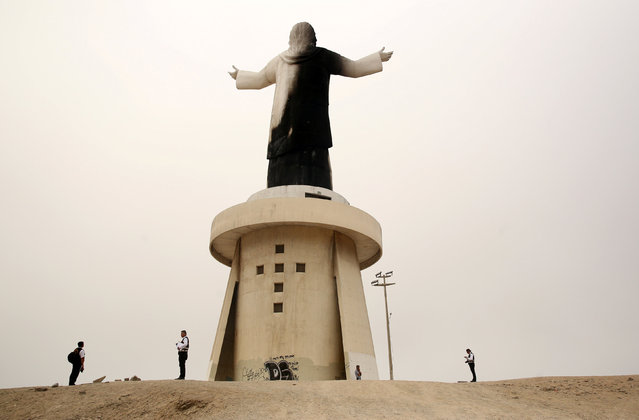 Police investigate near the statue of 'Christ of the Pacific' that was partially burned after a fire at the base of the monument, at Morro Solar hill in Chorrillos, Lima, Peru, January 13, 2018. (Photo by Mariana Bazo/Reuters) 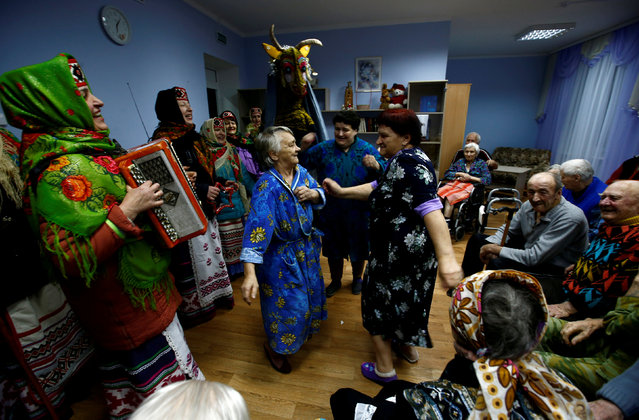 People celebrate the pagan rite called “Kolyadki” and mark the New Year, according to the Julian calendar on January 13, at the social department for the elderly and disabled people in the village of Vishnevka, Belarus January 13, 2018. (Photo by Vasily Fedosenko/Reuters) 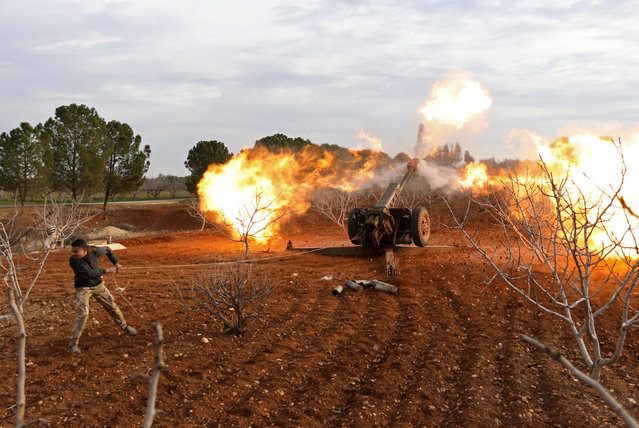 An opposition fighter fires a gun from a village near al-Tamanah during ongoing battles with government forces in Syria's Idlib province on January 11, 2018. The regime hopes to seize control of southeast parts of Idlib province to secure a main road between the capital Damascus and the northern city of Aleppo. (Photo by Omar Haj Kadour/AFP Photo) 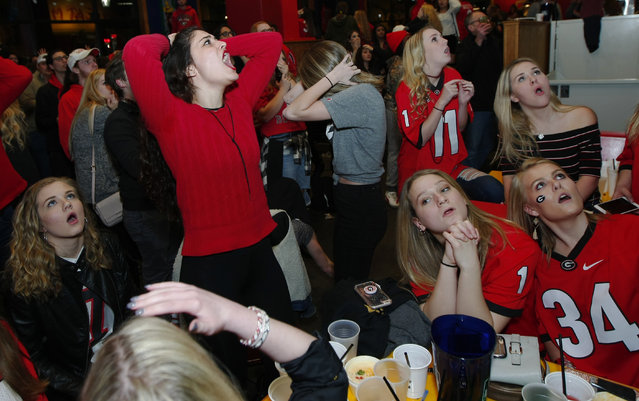 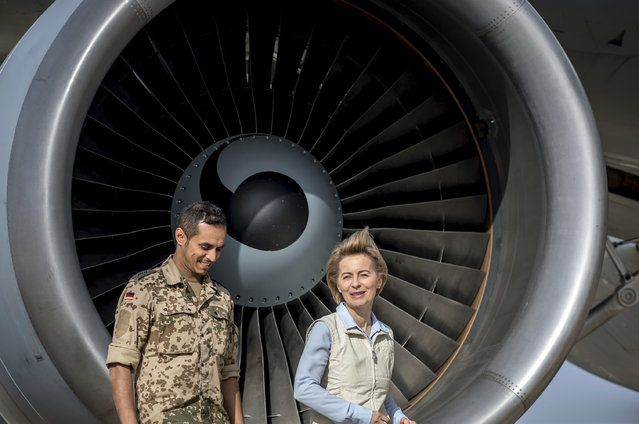 German defense minister Ursula von der Leyen,right, is accompanied by an unidentified German soldier after her arrival to Azraq air base in northern Jordan Saturday, Jan. 13, 2018. The Germany's defense minister is visiting a Jordanian air base where German troops have been stationed since October as part of an international military campaign against Islamic State extremists. A group of German parliamentarians accompanied Ursula von der Leyen on Saturday during her tour of the Azraq base in northern Jordan. (Michael Kappeler/Pool via AP) 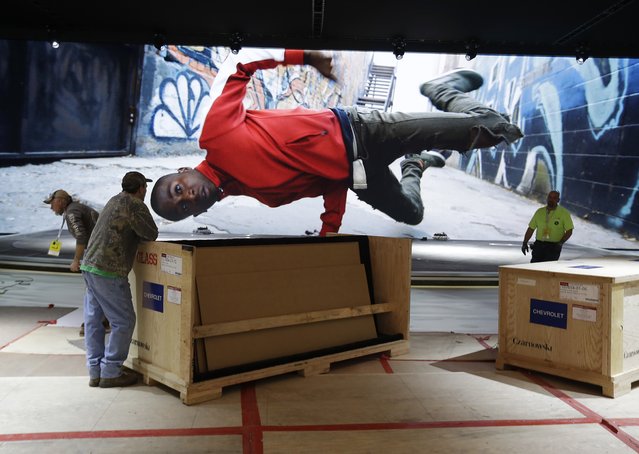 Installation continues at General Motors' showplace at the North American International Auto Show, as a video plays in the background, Friday, January 12, 2018, in Detroit. The show opens to the media on Monday, Jan. 15. (Photo by Carlos Osorio/AP Photo) 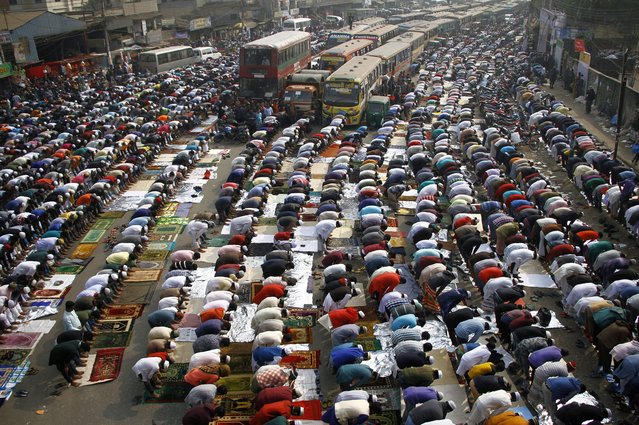 Bangladeshi residents offer Friday prayers as the world largest Muslims congregation begins in Tongi on January 12, 2018. Bishwa Ijtema, the biggest congregations of Muslims after the Hajj, has begun in Bangladesh. (Photo by Rehman Asad/AFP Photo) 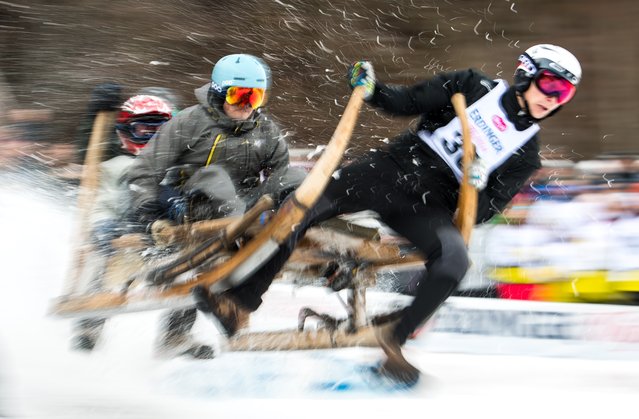