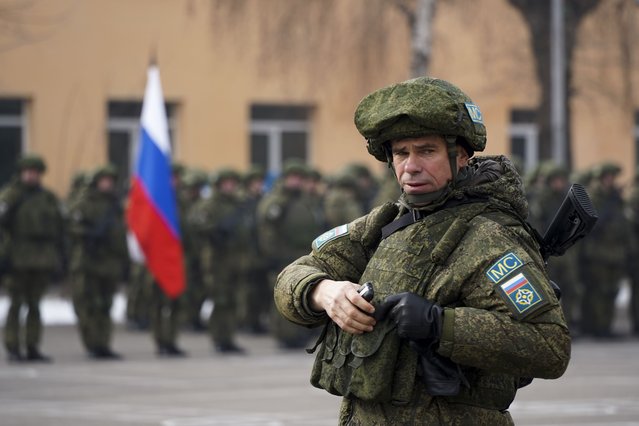 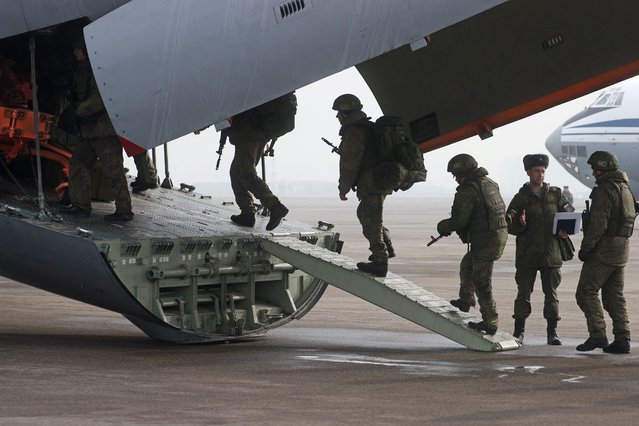 Russian servicemen with the CSTO peacekeeping forces board a homebound flight on Ilyushin Il-76 strategic airlifters at Almaty International Airport in Almaty, Kazakhstan on January 13, 2022. The Collective Security Treaty Organisation proceeds with a phased withdrawal of its peacekeeping contingent on January 13 upon successfully accomplishing an objective to help Kazakhstan restore and keep order in the protest-hit areas of the country. A rise in fuel prices sparked protests in the towns of Zhanaozen and Aktau in western Kazakhstan on January 2 and spread rapidly across the country. On January 5, President Tokayev dismissed the cabinet and declared a two-week state of emergency in the Mangistau and Almaty regions as well as in the cities of Almaty and Nur-Sultan. (Photo by Gavriil Grigorov/TASS) 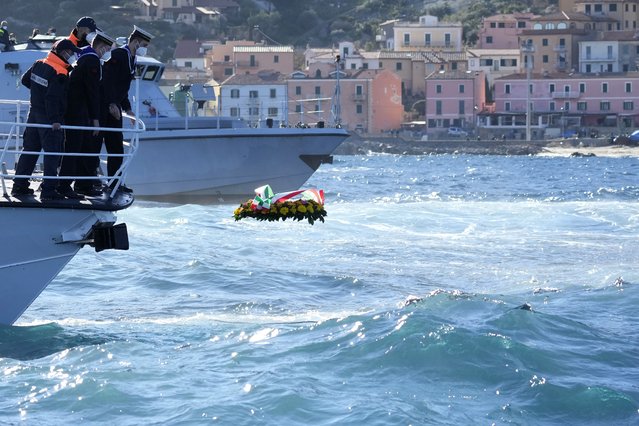 A flower wreath is set out to sea during a commemoration for the the victims of the Costa Concordia cruise ship disaster, in front of the Isola del Giglio, Italy, Thursday, January 13, 2022. Italy on Thursday is marking the 10th anniversary of the cruise ship disaster with a daylong commemoration, honoring the 32 people who died. (Photo by Andrew Medichini/AP Photo) 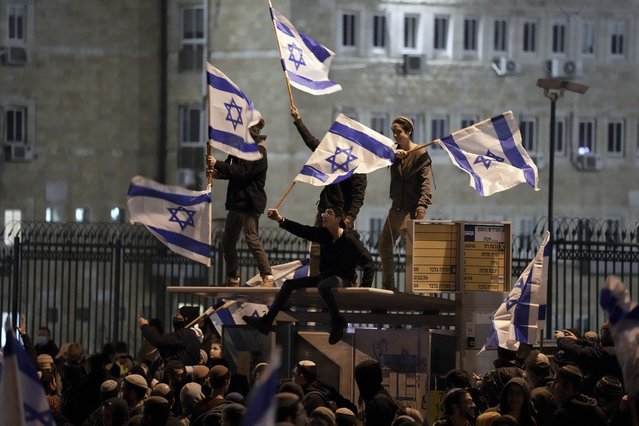 Israeli nationalists weave flags during a protest outside the parliament building in Jerusalem, calling on the government not to demolish a West Bank settlement outpost, Thursday, January 13, 2022. (Photo by Ariel Schalit/AP Photo) 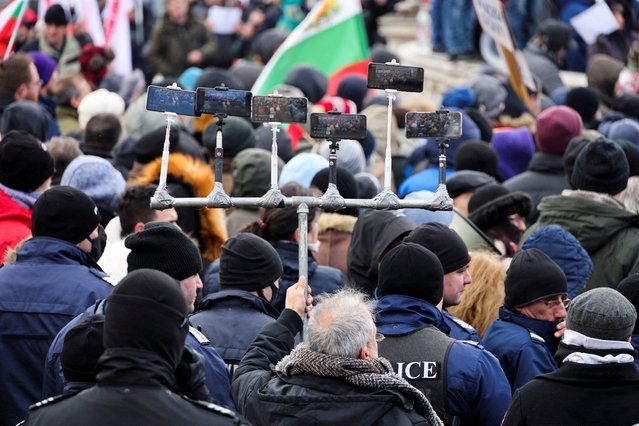 A man uses multiple devices to live stream as he participates in a rally against the government measures to curb the spread of the coronavirus disease (COVID-19), organised by the political party Vazrazhdane (Revival), in Sofia, Bulgaria, January 12, 2022. (Photo by Stoyan Nenov/Reuters) 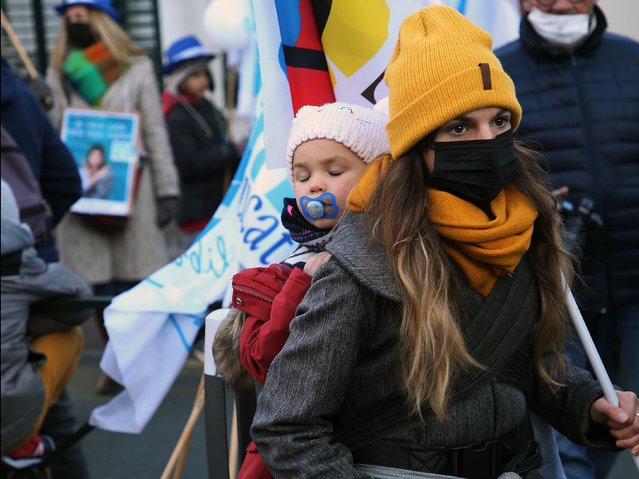 Teachers and students demonstrate in Bayonne, southwestern France, Thursday, January 13, 2022. French teachers have walked out in a nationwide strike Thursday to express anger at the way the government is handling the virus situation in schools, denouncing confusing rules and calling for more protection. (Photo by Bob Edme/AP Photo) 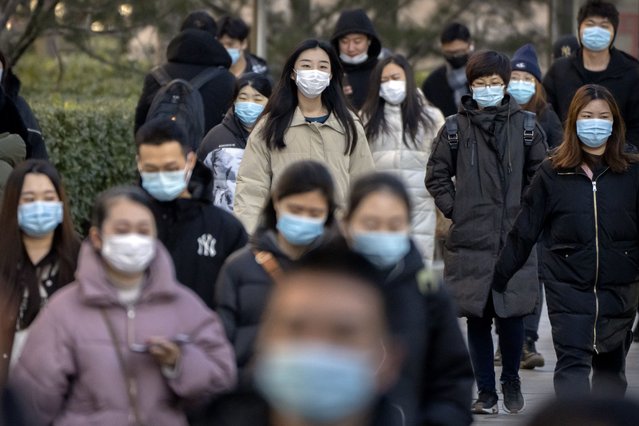 Commuters wearing face masks to help protect against the coronavirus walk along a street in the central business district in Beijing, Thursday, January 13, 2022. Just weeks before hosting the Beijing Winter Olympics, China is battling multiple coronavirus outbreaks in half a dozen cities, with the one closest to the capital driven by the highly transmissible omicron variant. (Photo by Mark Schiefelbein/AP Photo) 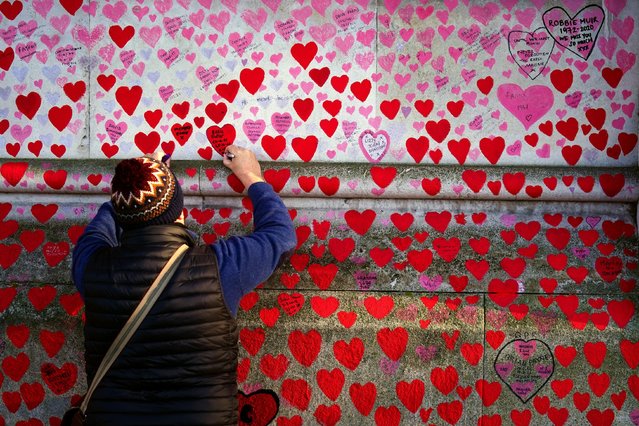 A man writes on a heart at the National Covid Memorial Wall, in Westminster, London on Thursday, January 13, 2022. (Photo by Victoria Jones/PA Images via Getty Images) 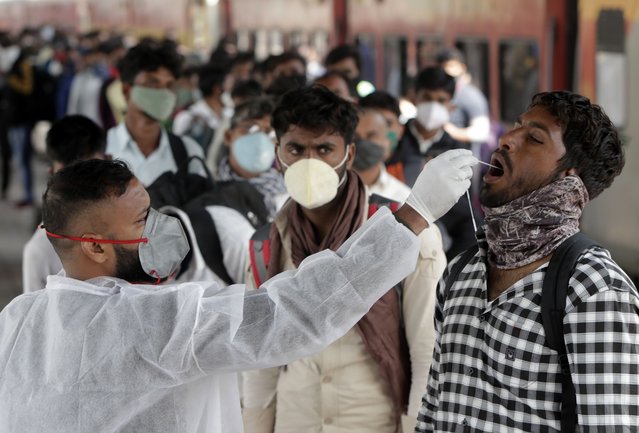 A health worker collects a swab sample from a traveler at a train station to test for COVID-19 before allowing him to enter the city, in Mumbai, India, Wednesday, January 12, 2022. (Photo by Rajanish Kakade/AP Photo) 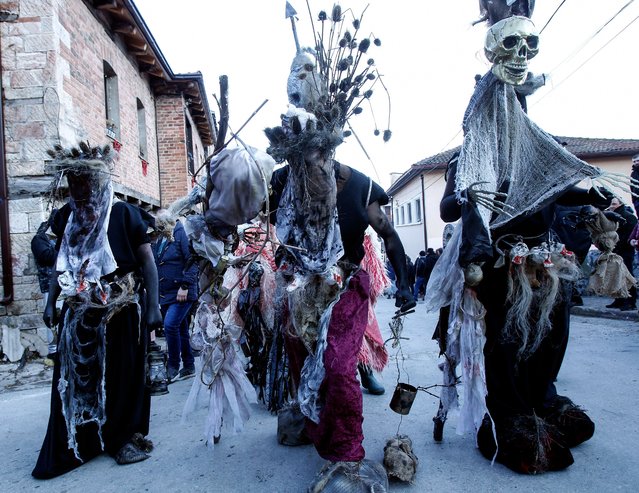 Costumed revelers participate in the carnival parade through the village of Vevcani, in the southwestern part of North Macedonia, on Thursday, January 13, 2022. Hundreds of people participated Thursday and many more watched the carnival celebrations which have been taken place for centuries in the tiny North Macedonia's town of Vevcani. Even though the number of new COVID-19 cases is reaching records in North Macedonia since the beginning of epidemic almost two years ago, authorities did not impose new restrictions. (Photo by Boris Grdanoski/AP Photo) 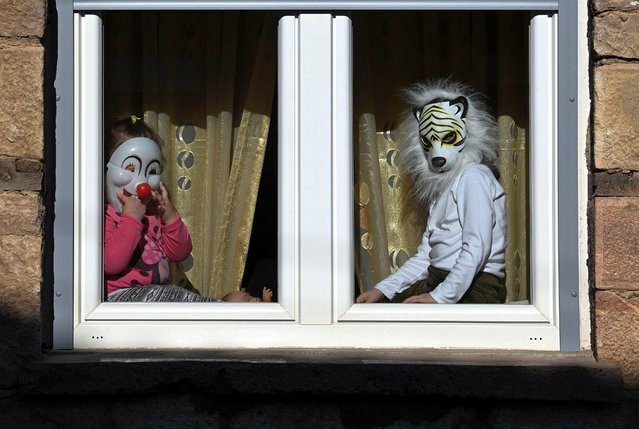 Children wearing masks watch the carnival procession from a window of their house on the first day of a carnival celebration marking the Orthodox St. Vasilij Day in the village of Vevcani, Republic of North Macedonia, 13 January 2022. The Vevcani Carnival is one of the most famous village festivals in the Balkans. It is believed that the custom is over 1,400 years old and based on pagan beliefs. Essentially the carnival is the ritual of calling after Saint Basil the Great, which coincides with the Twelve Days of the Orthodox Christmas and the Orthodox New Year. The festivity is held on 13 and 14 January every year. People in Vevcanci believe that with their masks they banish evil spirits from their lives. The participants of the carnival are known as Vasilicari. The highlights of the carnival include a political satire where masked villagers act out current events. In 1993, the carnival and the village of Vevcani officially became a part of the World Federation of Carnival Cities. (Photo by Georgi Licovski/EPA/EFE) 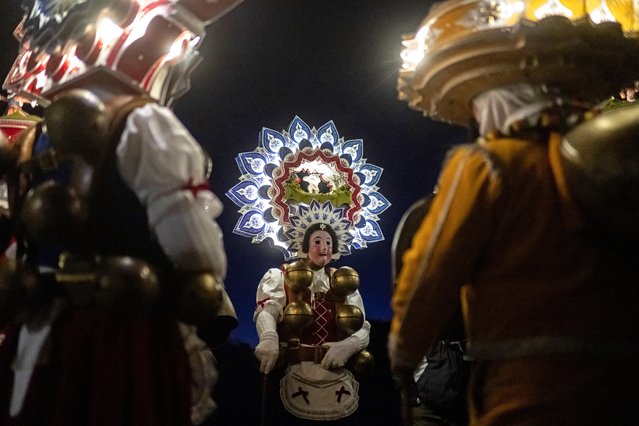 The so-called “Silvesterchlaeuse” (New Years Clause) goes through the village of Hundwil, Switzerland, 13 January 2022, to offer best wishes for the New Year, following the Julian calendar, to the farmers in this region. (Photo by Gian Ehrenzeller/EPA/EFE) 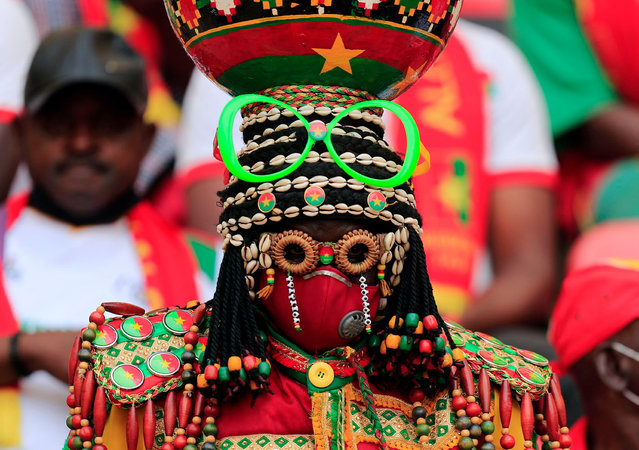 A fan wears a costume at the Africa Cup of Nations game between Cameroon and Ethiopia at Stade d’Olembe, Cameroon on January 13, 2022. (Photo by Thaier Al-Sudani/Reuters) 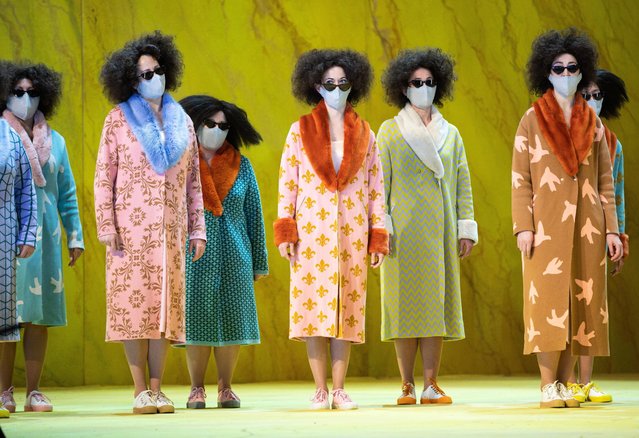 A scene during the rehearsal of the opera comique “La fille du regiment” by Italian composer Gaetano Donizetti in Erkel Theatre of the Hungarian State Opera in Budapest, Hungary, 12 January 2022 (issued 13 January 2022), two days before the premiere of the performance directed by Csaba Polgar. (Photo by Balazs Mohai/EPA/EFE) 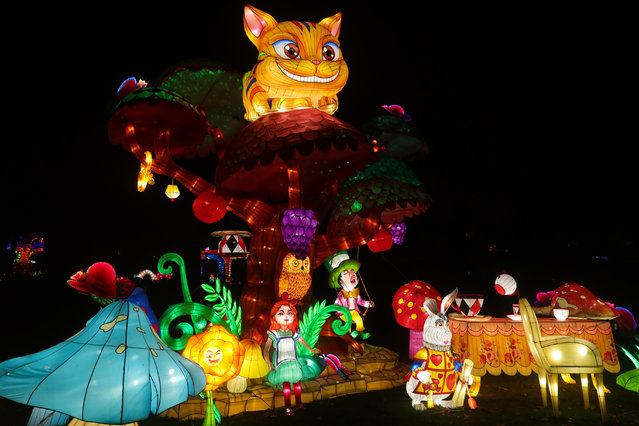 Light installations are pictured during the sixth edition of China light festival themed “Alice in Wonderland” at the Antwerp Zoo in Antwerp, Belgium, January 12, 2022. (Photo by Zheng Huansong/Xinhua News Agency) 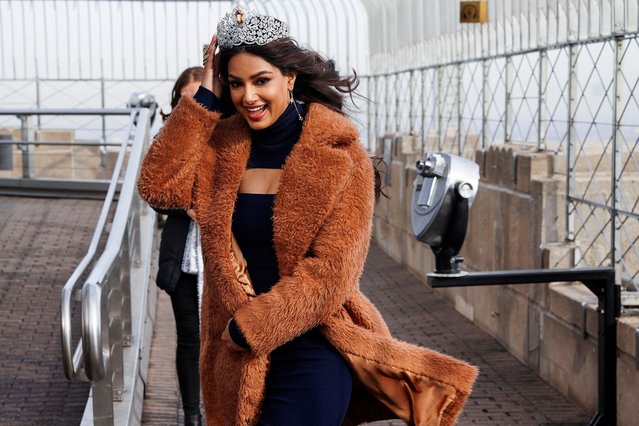