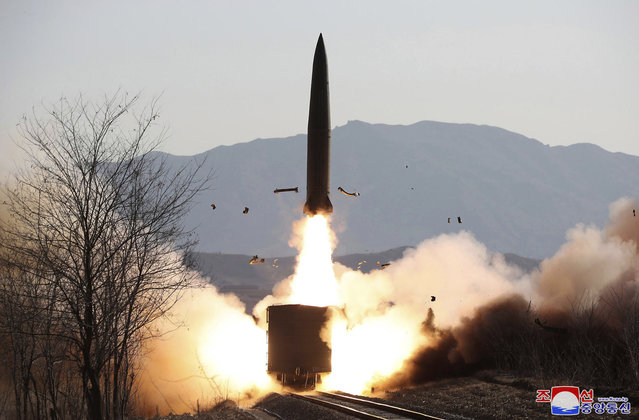 This photo provided on Saturday, January 15, 2022, by the North Korean government shows a missile test from railway in North Pyongan Province, North Korea, on January 14, 2022. North Korea on Jan. 15 said it test-launched ballistic missiles from a train in what was seen as an apparent retaliation against fresh sanctions imposed by the Biden administration. Independent journalists were not given access to cover the event depicted in this image distributed by the North Korean government. The content of this image is as provided and cannot be independently verified. Korean language watermark on image as provided by source reads: “KCNA” which is the abbreviation for Korean Central News Agency. (Photo by Korean Central News Agency/Korea News Service via AP Photo) 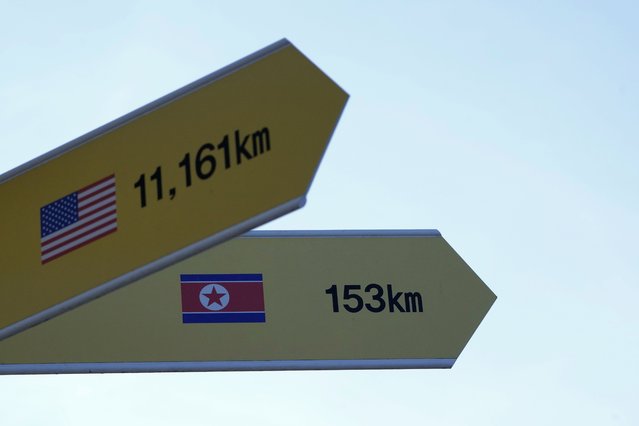 Destination signs to North Korea's capital Pyongyang and the United States, are seen at the Imjingak Pavilion in Paju, near the border with North Korea, South Korea, Friday, January 14, 2022. North Korea on Friday fired two short-range ballistic missiles in its third weapons launch this month, officials in South Korea said, in an apparent reprisal for fresh sanctions imposed by the Biden administration for its continuing test launches. (Photo by Ahn Young-joon/AP Photo) 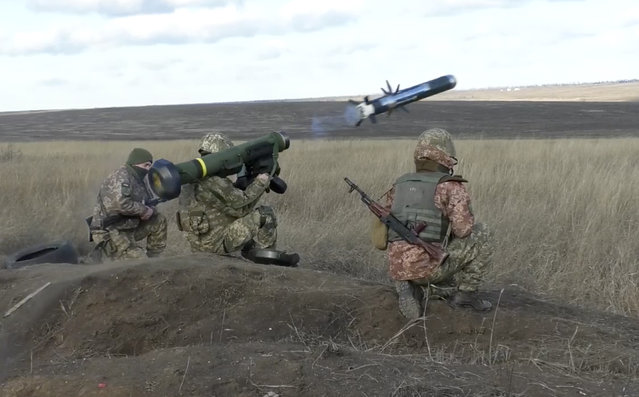 In this image taken from footage provided by the Ukrainian Defense Ministry Press Service, a Ukrainian soldiers use a launcher with US Javelin missiles during military exercises in Donetsk region, Ukraine, Wednesday, January 12, 2022. President Joe Biden has warned Russia's Vladimir Putin that the U.S. could impose new sanctions against Russia if it takes further military action against Ukraine. (Photo by Ukrainian Defense Ministry Press Service via AP Photo) 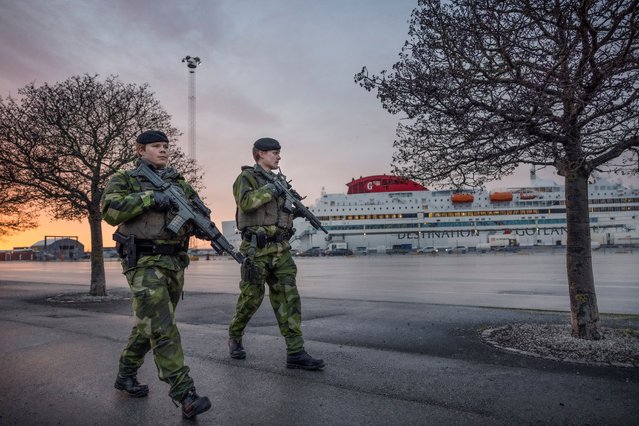 Soldiers from Gotland's regiment patrol Visby harbour, amid increased tensions between NATO and Russia over Ukraine, on the Swedish island of Gotland, Sweden, 13 January 2022. (Photo by Karl Melander/TT News Agency via Reuters) 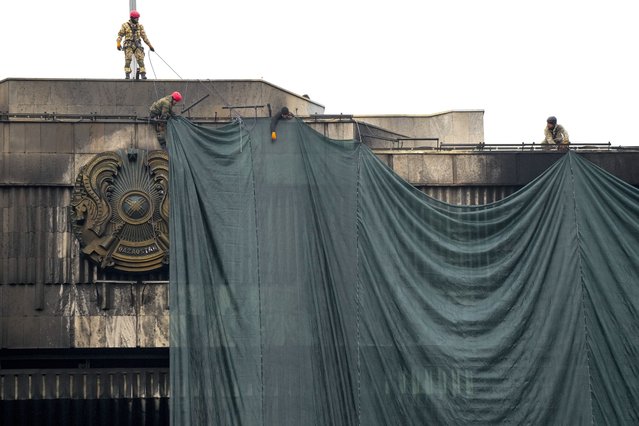 Municipal workers cover the burnt city hall building for repairing in Almaty, Kazakhstan, Thursday, January 13, 2022. President Kassym-Jomart Tokayev has blamed the unrest on foreign-backed “terrorists” and requested assistance from the Collective Security Treaty Organization, a Russia-led military alliance of six ex-Soviet states. The bloc sent over 2,000 troops to Kazakhstan last week. On Tuesday Tokayev declared their mission complete and said they would start pulling out on Thursday. (Photo by Sergei Grits/AP Photo) 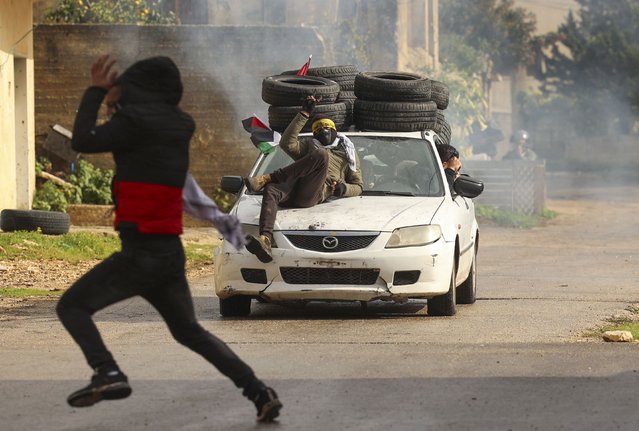 A Palestinian protester flashes the victory sign amid clashes with Israeli security forces, following a demonstration against the expropriation of land by Israel in the village of Kfar Qaddum near the Jewish settlement of Kedumim in the occupied West Bank, on January 14, 2022. (Photo by Jaafar Ashtiyeh/AFP Photo) 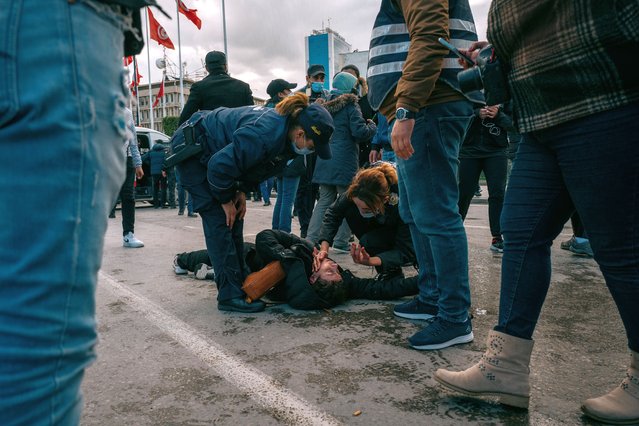 A Tunisian man lies on the ground as protesters clash with police during protests against President Kais Saied, on the 11th anniversary of the Tunisian revolution in the capital Tunis on January 14, 2022. Tunisian police used teargas today against hundreds of demonstrators who had defied a ban on gatherings to protest against President Kais Saied's July power grab. As the country marks 11 years since the fall of late dictator Zine El Abidine Ben Ali, hundreds of Saied's opponents staged rallies against his July 2021 power grab. (Photo by Erin Clare Brown/The National) 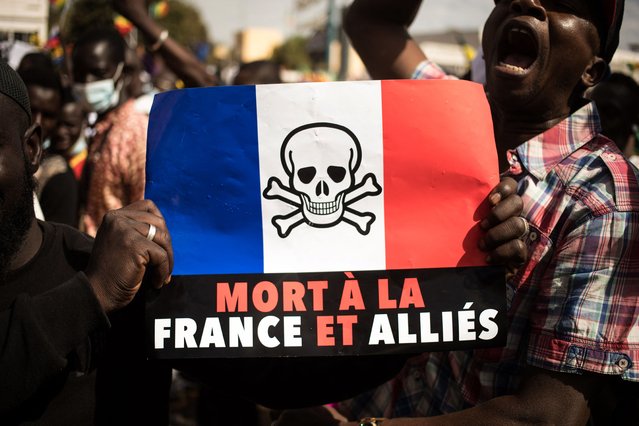 Demonstrators hold up a that reads, “Death to France and its allies”, during a mass demonstration to protest against sanctions imposed on Mali and the Junta, by the Economic Community of West African States (ECOWAS), in Bamako on January 14, 2022. Malians took to the streets on January 14, 2022, after the military junta called for protests against stringent sanctions imposed by the West Africa bloc ECOWAS over delayed elections. (Photo by Florent Vergnes/AFP Photo) 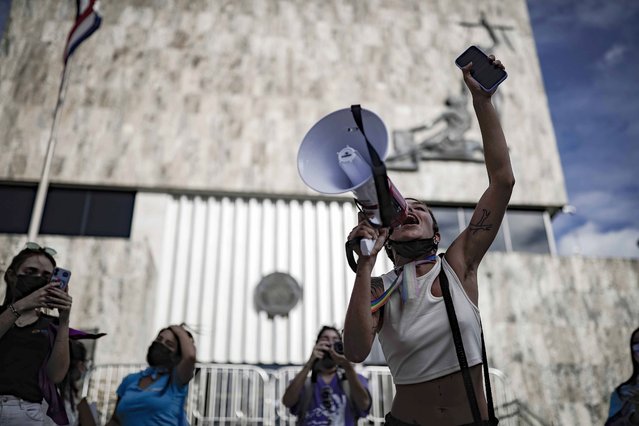 Women from different feminist organizations march against sexist violence, denouncing cases of feminicide and rapes of women that have hit​ the country, in San Jose, Costa Rica, 13 January 2022. (Photo by Jeffrey Arguedas/EPA/EFE) 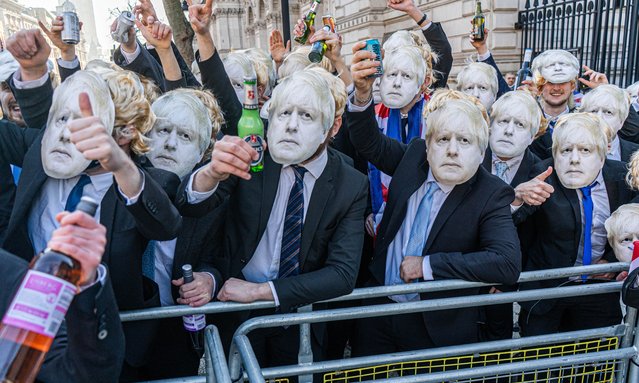 A group of men dressed as Boris Johnson stage a humurous mock lockdown party protest outside Downing Street, London on January 14, 2022 as they chant “Boris loves a party”. Prime Minister Boris Johnson has admitted at PMW on wednesday that he attended a garden party at Downing Street on 20 May 2020 during strict coronavirus restrictions. (Photo by Amer Ghazzal/Rex Features/Shutterstock) 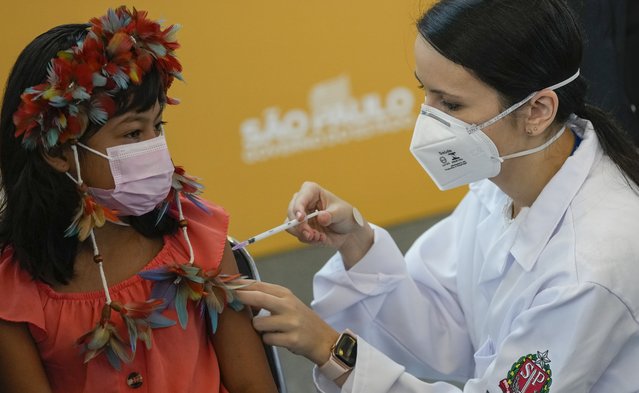 A health worker gives a shot of the Pfizer COVID-19 vaccine to 9-year-old Indigenous youth Stella Para Poty Fernandes Martins at the Hospital da Clinicas in Sao Paulo, Brazil, Friday, January 14, 2022. The state of Sao Paulo started the COVID-19 vaccination of children between ages 5 and 11. (Photo by Andre Penner/AP Photo) 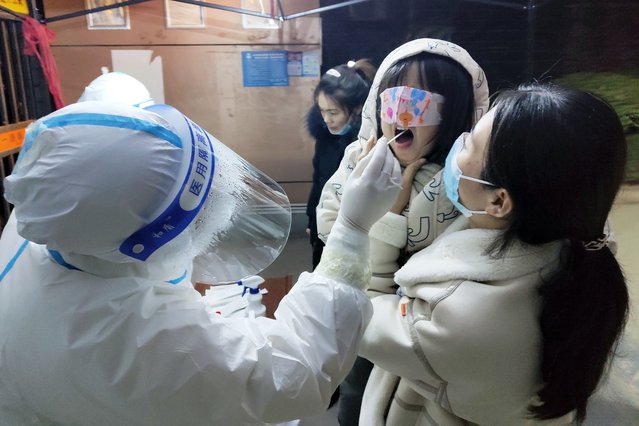 A medical worker wearing a protective suit swabs a child for a coronavirus test in Huaxian County in central China's Henan Province, Friday, January 14, 2022. China further tightened its anti-pandemic measures in Beijing and across the country on Friday as scattered outbreaks continued ahead of the opening of the Winter Olympics in a little over two weeks. (Photo by Chinatopix via AP Photo) 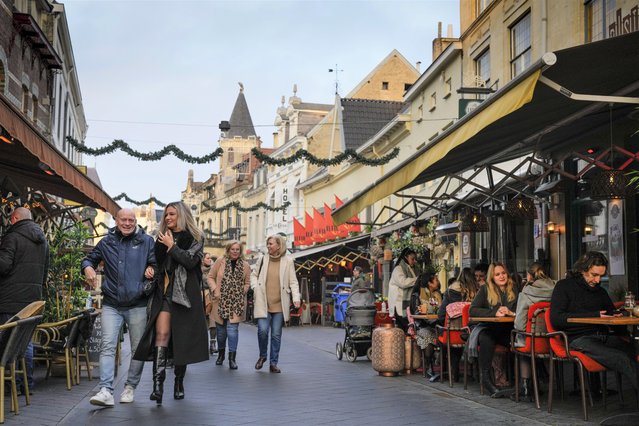 People enjoy the reopening of bars in Valkenburg, southern Netherlands, Friday, January 14, 2022, where shops, bars and restaurants opened in a protest action that underscored growing anger at weeks of coronavirus lockdown measures, a day before some of the restrictions are expected to be eased. (Photo by Peter Dejong/AP Photo) 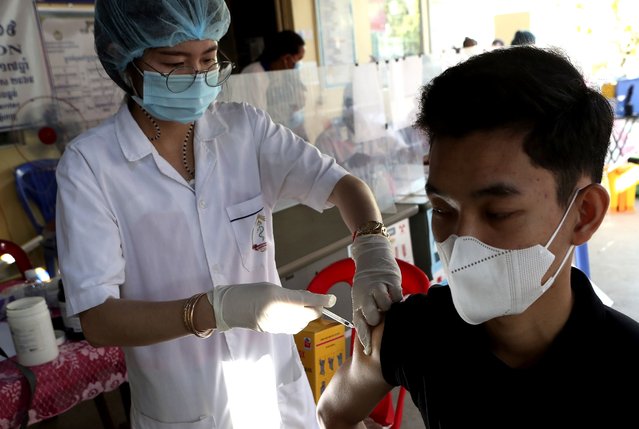 A Cambodian man, right, receives a shot of fourth dose of the Pfizer's COVID-19 vaccine at a heath center in Phnom Penh, Cambodia, Friday, January 14, 2022. Cambodia on Friday began a fourth round of vaccinations against the coronavirus, following the recent discovery of cases of the omicron variant, with high-risk groups being the first to receive them. (Photo by Heng Sinith/AP Photo) 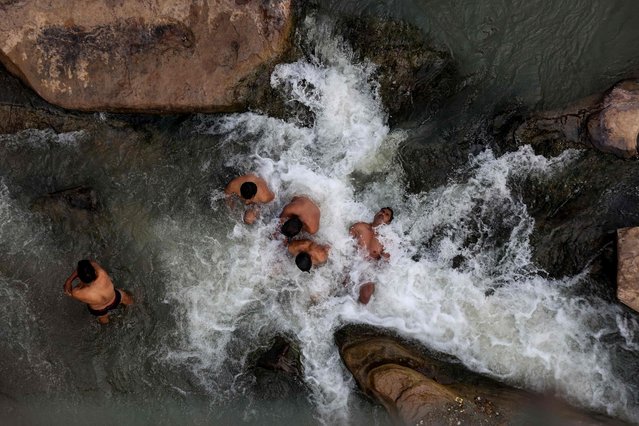 Hindu devotees take a dip into a stream in the waters of river Narmada on the occasion of Makar Sankranti a day considered to be of great religious significance in Hindu mythology at Budhni about 60 kms from Bhopal on January 14, 2022. (Photo by Gagan Nayar/AFP Photo) 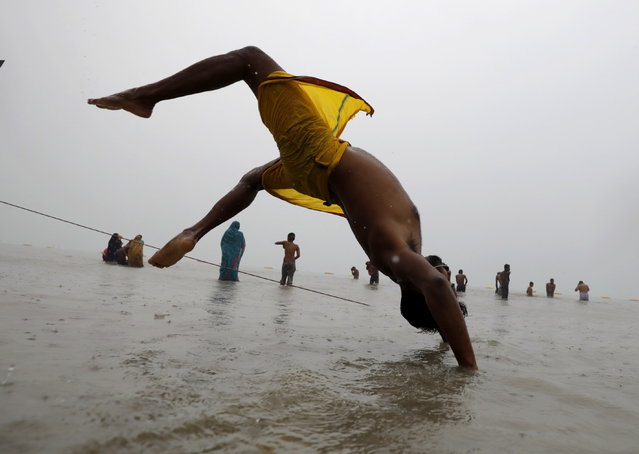 An Indian devotee performs yoga as he takes a holy dip at Sagar Island during second day of annual fair amid Covid crisis, 130km south of Kolkata, Eastern India, 14 January 2022. Bengal government announced a new partial lockdown and night curfew for fifteen days to combat new Omicron variant. Ganga Sagar Fair is an annual gathering of Hindu pilgrims during Makar Sankranti on Sagar Island, to take a dip in the sacred waters of the Ganges River before it reaches the Bay of Bengal. (Photo by Piyal Adhikary/EPA/EFE) 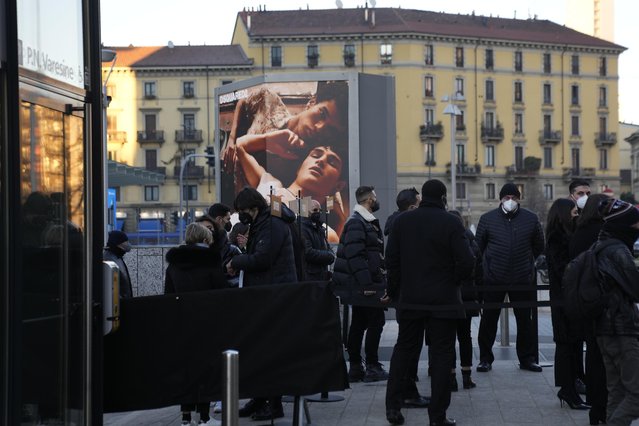 People wait outside prior to the start of the DSquared2 fall winter 22/23 fashion show, in Milan, Italy, Friday, January 14, 2022. (Photo by Luca Bruno/AP Photo) 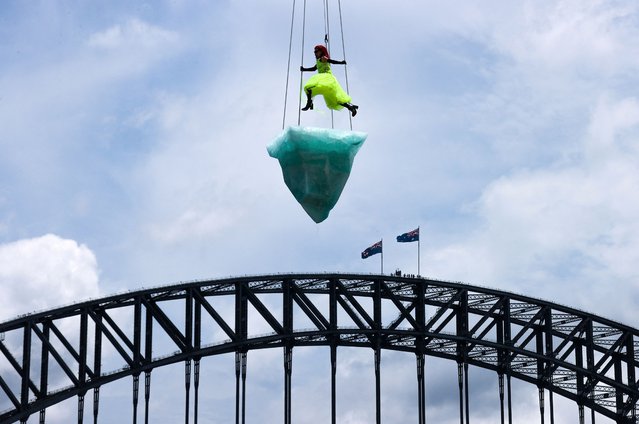 Artist Victoria Hunt performs “Thaw” atop an “iceberg” suspended above Sydney Harbour and in front of the Sydney Harbour Bridge as part of the 2022 Sydney Festival in Sydney on January 14, 2022. (Photo by David Gray/AFP Photo) 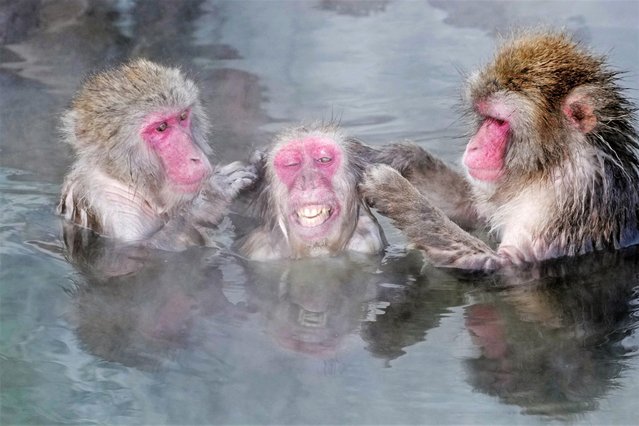