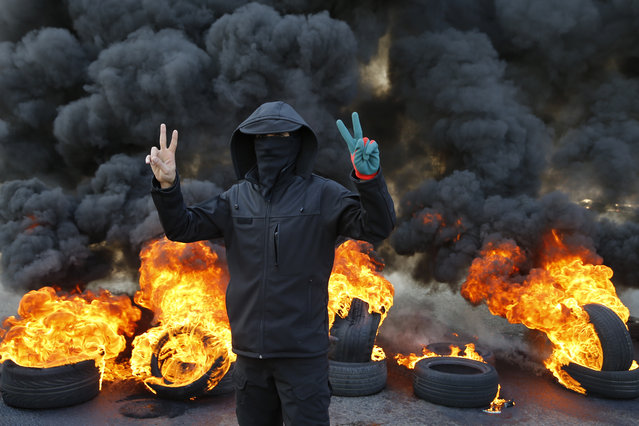 An anti-government protester flashes the victory sign as burning tires block a main highway during a protest in the town of Jal el-Dib, north of Beirut, Lebanon, Tuesday, January 14, 2020. Following a brief lull, Lebanese protesters returned to the streets, blocking several roads around the capital, Beirut, and other areas of the country on Tuesday in renewed rallies against a ruling elite they say has failed to address the economy's downward spiral. (Photo by Bilal Hussein/AP Photo) 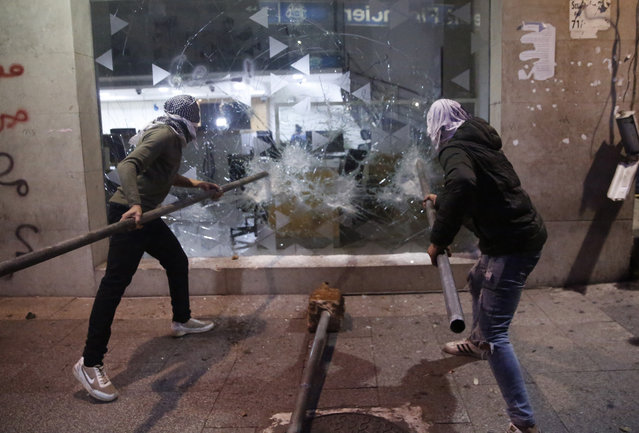 Anti-government protesters smash a bank widow, during ongoing protests against the Lebanese central bank's governor and against the deepening financial crisis, at Hamra trade street, in Beirut, Lebanon, Tuesday, January 14, 2020. Lebanese security forces lobbed tear gas at protesters who responded with rocks outside the country's central bank Tuesday, a violent turn after demonstrators returned to the streets following a weekslong lull. (Photo by Hussein Malla/AP Photo) 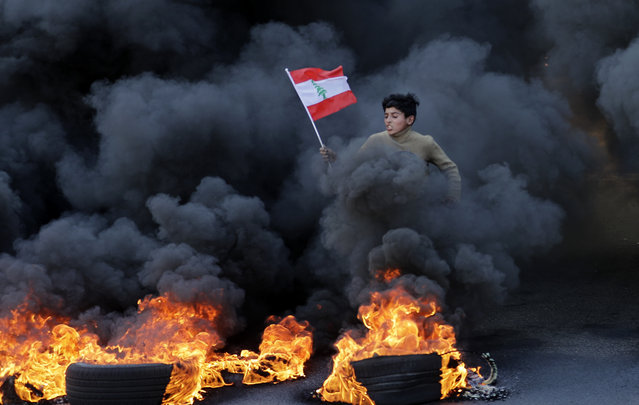 A Lebanese youth runs with a national flag as smoke billows from burning tires during a demonstration in Jal el-Dib area on the northern outskirts of the Lebanese capital Beirut on January 14, 2020. Lebanese protesters resumed blocking major highways in what they said would be a “week of wrath” demanding an end to a nearly three-month political vacuum. Although protests had declined in size in recent weeks, demonstrations have been ongoing since October, increasingly targeting banks and state institutions blamed for driving the country towards collapse. (Photo by Joseph Eid/AFP Photo) 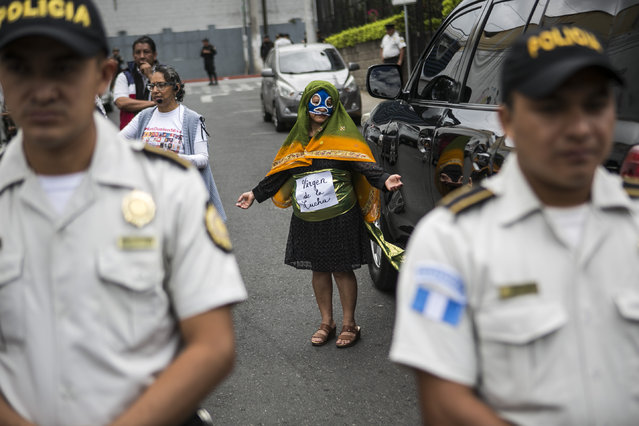 A demonstrator wearing a costume that reads in Spanish: “Virgin of the fight” protests outgoing President Jimmy Morales outside the Central American Parliament building where Morales will arrive to join the parliament as a lawmaker, in Guatemala City, Tuesday, January 14, 2020. Guatemala will inaugurate on Tuesday a new president as Morales exits amid swirling corruption accusations. (Photo by Oliver de Ros/AP Photo) 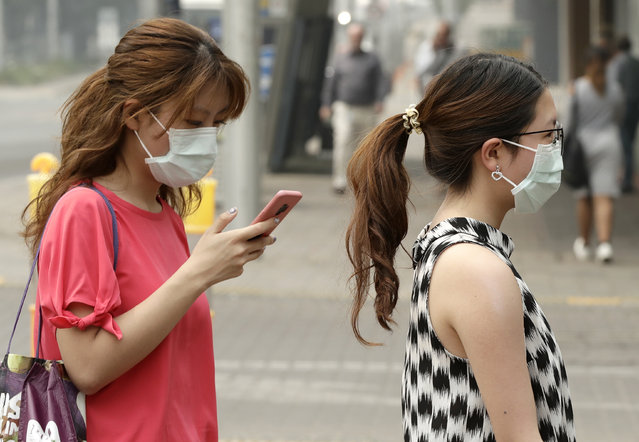 In this January 2, 2020, file photo, pedestrians wear masks as smoke shrouds the Australian capital of Canberra, Australia. It's an unprecedented dilemma for Australians accustomed to blue skies and sunny days that has raised fears for the long-term health consequences if prolonged exposure to choking smoke becomes the new summer norm. (Photo by Mark Baker/AP Photo/File) 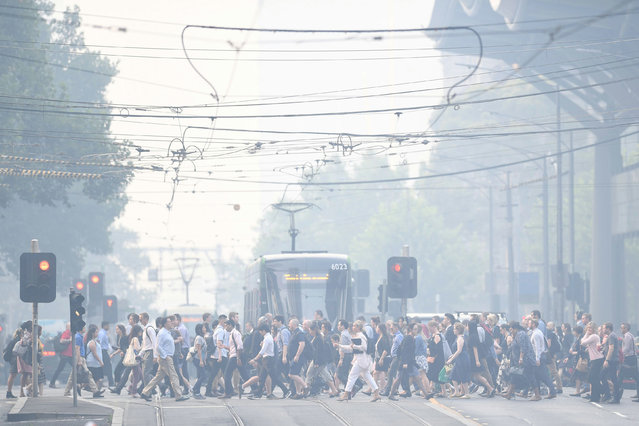 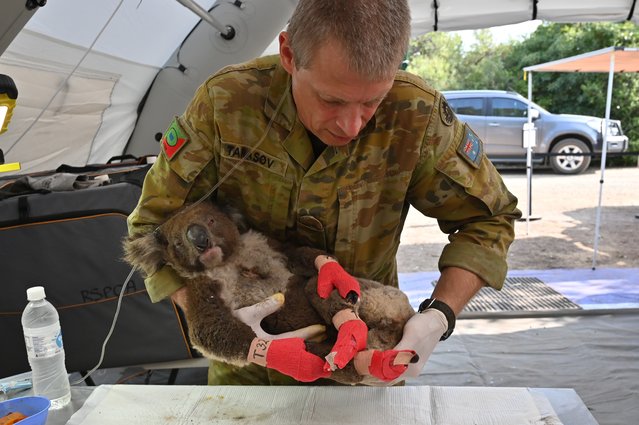 A member of the Australian Defence Force picks up an injured Koala after it was treated for burns at a makeshift field hospital at the Kangaroo Island Wildlife Park on Kangaroo Island on January 14, 2020. Hundreds of koalas have been rescued and brought to the park for treatment after bushfires ravaged the island off the south coast of Australia. (Photo by Peter Parks/AFP Photo) 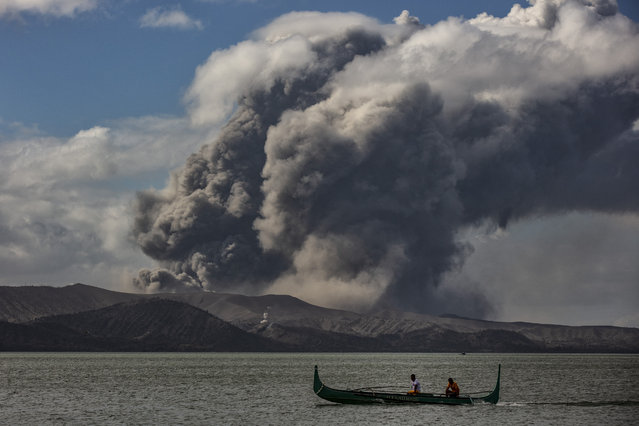 A fishing boat sails along a lake as Taal Volcano erupts on January 14, 2020 in Talisay, Batangas province, Philippines. The Philippine Institute of Volcanology and Seismology raised the alert level to four out of five, warning that a hazardous eruption could take place anytime, as authorities have evacuated tens of thousands of people from the area. An estimated $10 million worth of crops and livestock have been damaged by the on-going eruption, according to the country's agriculture department. (Photo by Ezra Acayan/Getty Images) 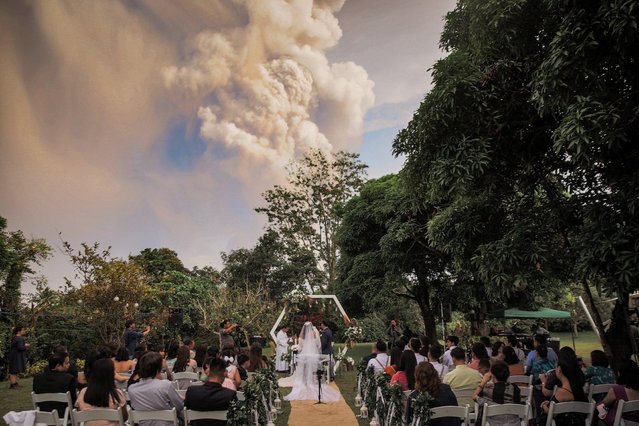 People attend a wedding ceremony as Taal Volcano sends out a column of ash in the background in Alfonso, Cavite, Philippines, January 12, 2020. (Photo by Randolf Evan Photography/Social Media via Reuters) 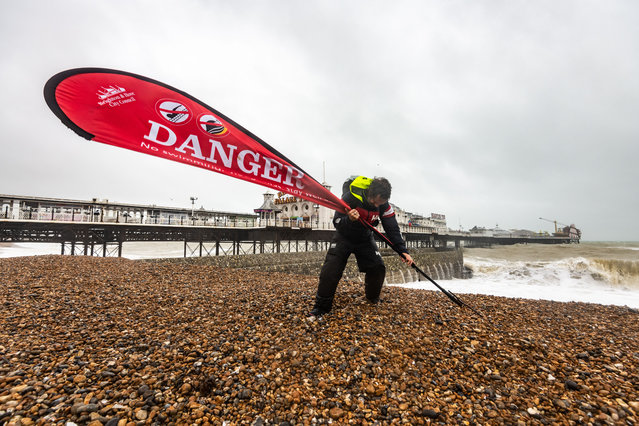 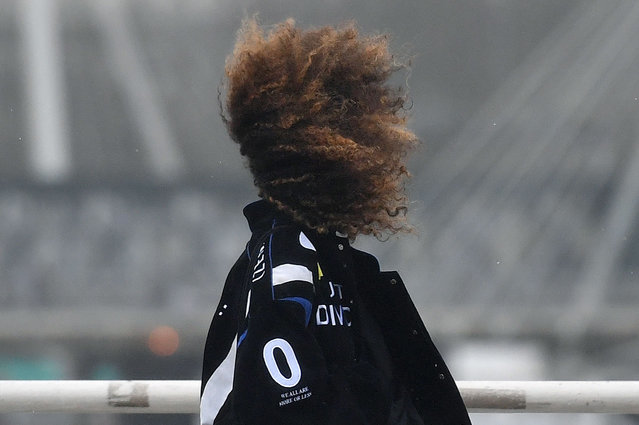 A woman's hair is blown by a gust of wind as she walks across Waterloo Bridge in London on January 14, 2020. Weather warnings issued yesterday by Britain's Met Office remained in force Tuesday after Storm Brendan brought winds of nearly 90mph to parts of the country. (Photo by Justin Tallis/AFP Photo) 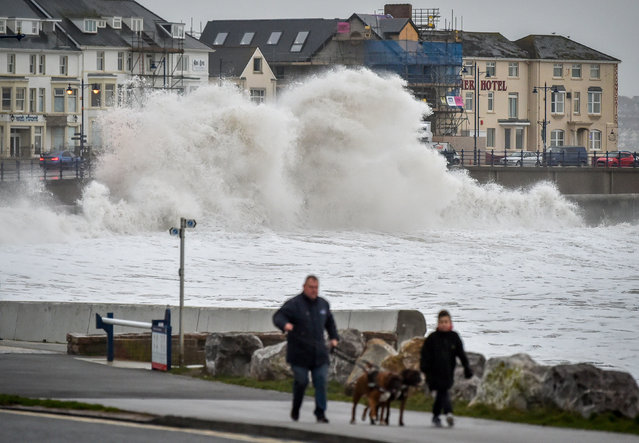 Huge waves hit the sea wall in Porthcawl, Wales on January 14, 2020, as gales of up to 80mph from Storm Brendan caused disruption around the UK. (Photo by Ben Birchall/PA Images via Getty Images) 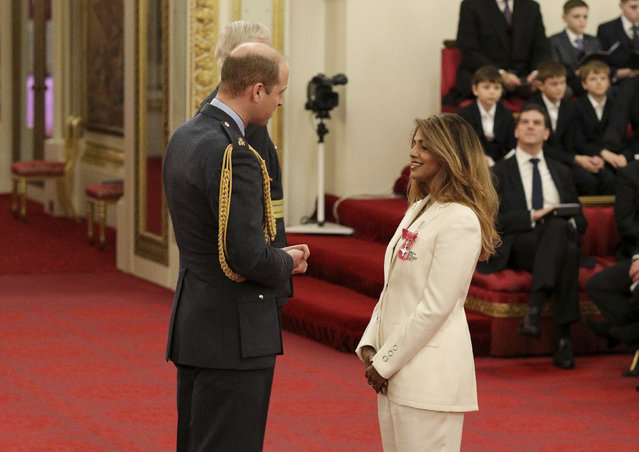 Rapper and singer MIA, real name Mathangi Arulpragasam, is made an MBE by Prince William Duke of Cambridge, left, at Buckingham Palace, in London, Tuesday January 14, 2020. The honorary award is conferred in recognition of contributions to the arts, sport, sciences, and charitable works. (Photo by Jonathan Brady/PA Wire via AP Photo) 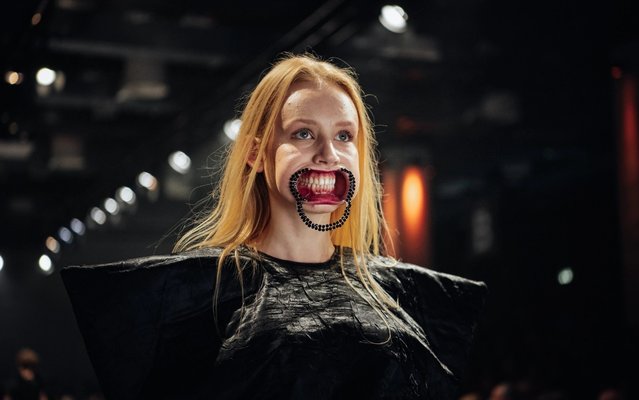