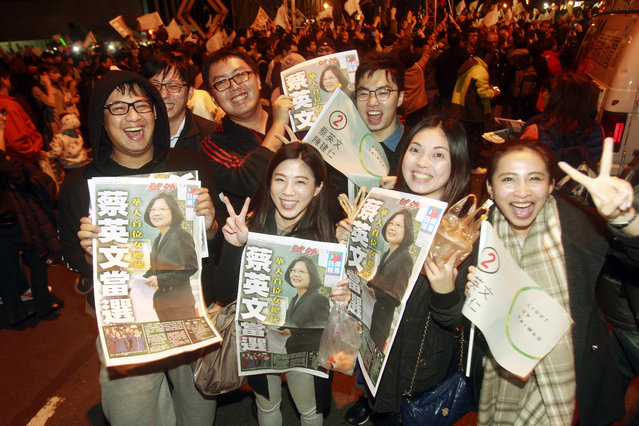 Supporters of Democratic Progressive Party, or DPP, presidential candidate Tsai Ing-wen show extra editions to cheer at the campaign headquarters as early polling numbers arrive in her favor, Saturday, January 16, 2016, in Taipei, Taiwan. Taiwanese voted for a new president Saturday, with the China-friendly Nationalist Party likely to lose power to the pro-independence opposition amid concerns that the island's economy is under threat from China and broad opposition to Beijing's demands for political unification. (Photo by Chiang Ying-ying/AP Photo) 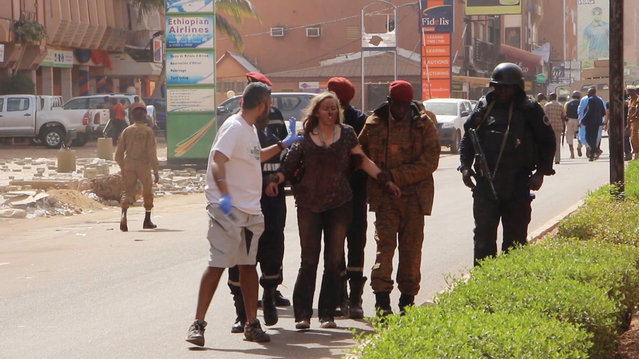 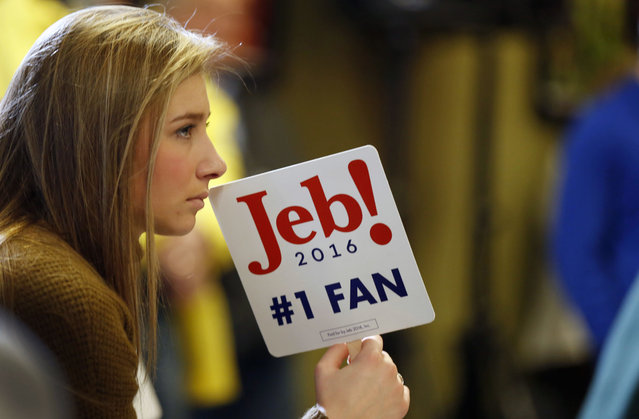 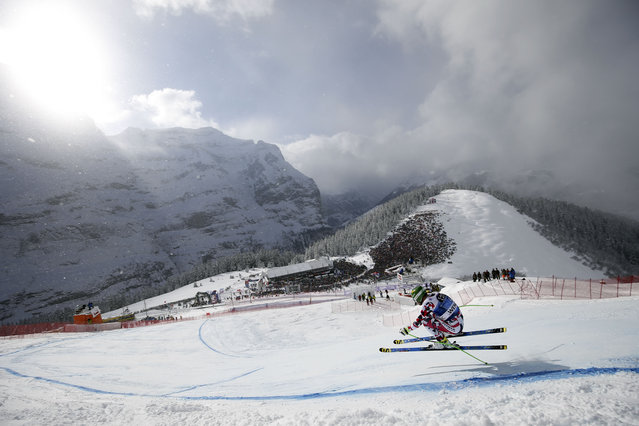 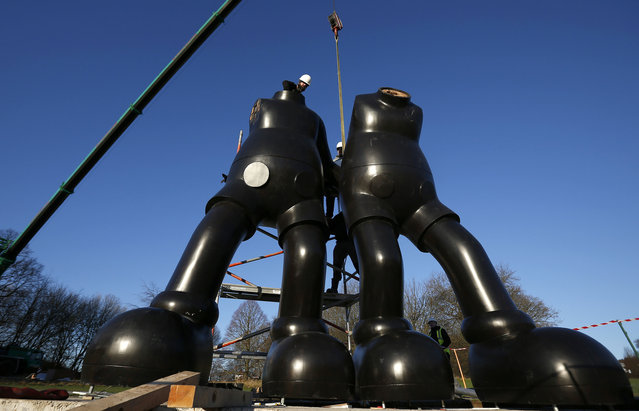 Workers construct the sculpture "Along the Way" by U.S. artist Brian Donnelly, who works under the name of KAWS, at the Yorkshire Sculpture Park near Wakefield, north England January 15, 2016. The exhibition will feature 6 sculptures up to 10 metres tall and will open on February 6. (Photo by Phil Noble/Reuters) 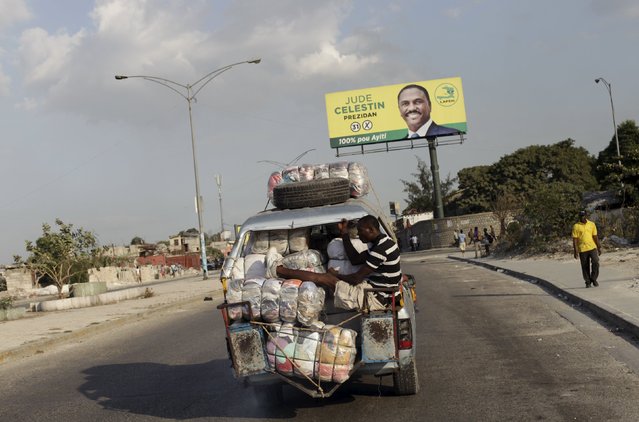 A man sits on the back of a tap-tap as it passes next to an electoral poster of presidential candidate Jude Celestin in Port-au-Prince, Haiti, January 15, 2016. Haiti's opposition presidential candidate Jude Celestin has announced he will not take part in a runoff election because he does not have faith in the process, in a move that could mean a shoe-in for the ruling party on Jan. 24. (Photo by Andres Martinez Casares/Reuters) 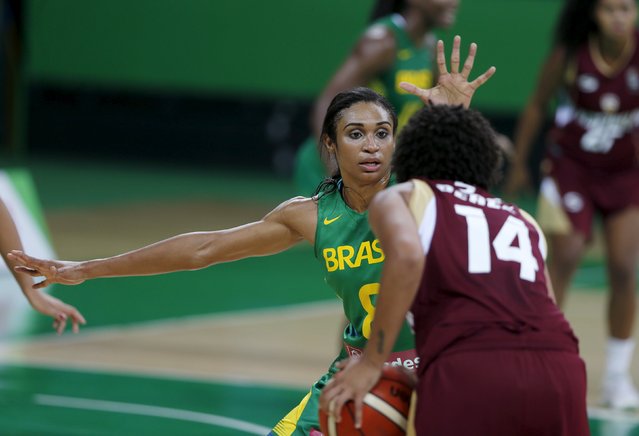 Iziane Castro (L) of Brazil defends against Waleska Perez of Venezuela during their women's basketball match, a test event for the Rio 2016 Olympic Games, at the Arena Carioca 1 in the Rio 2016 Olympic Park in Rio de Janeiro, Brazil, January 15, 2016. (Photo by Sergio Moraes/Reuters) 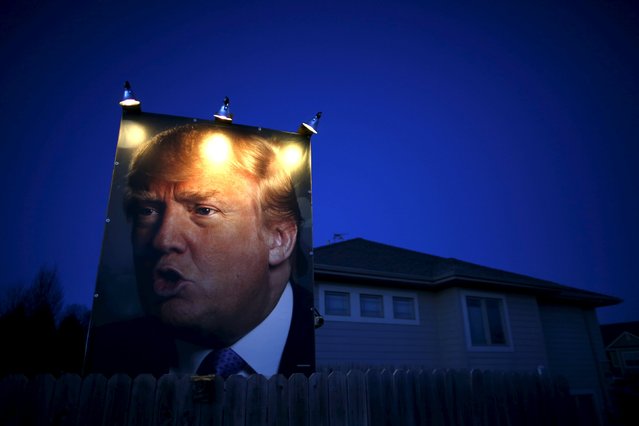 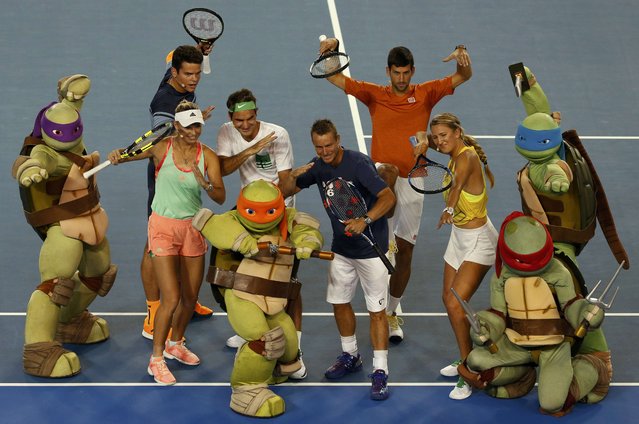 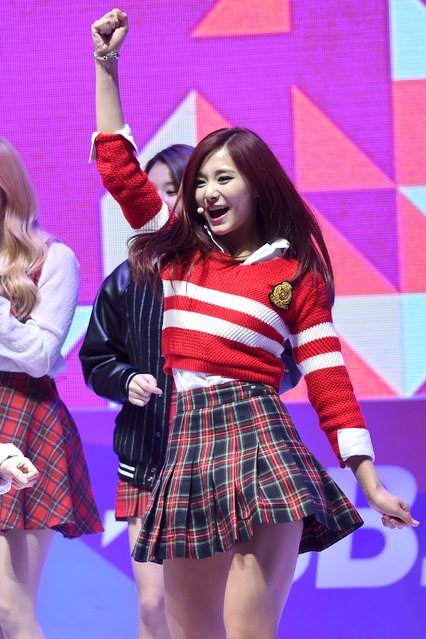 Chou Tzuyu, the only Taiwanese member of K-Pop girl group Twice, performs during the 2015 SBS Awards Festival in Seoul, South Korea, December 30, 2015. The 16-year-old Taiwan singer with the South Korean girl band inadvertently shot to the top of Taiwan's election agenda on January 16, 2016 after she publicly apologised for holding a Taiwan flag, prompting anger in Taiwan as it voted for a new president. China and Taiwan traded accusations after Chou released a video late on Friday in which she said she feels proud to be Chinese and that there is only one China, after she held the flag on a television show. (Photo by Kwon Hwon-jin/Reuters/News1) 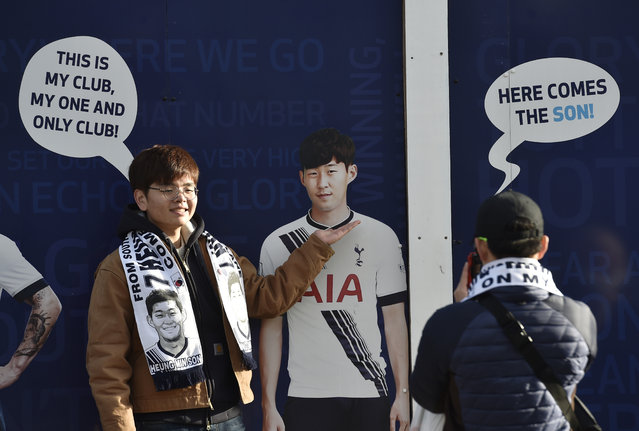 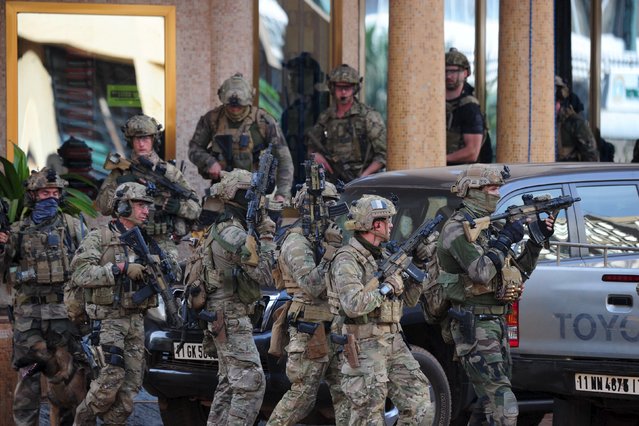 French soldiers arrive at the site of the attack in Ouagadougou, Burkina Faso, January 16, 2016. (Photo by Reuters/Stringer) 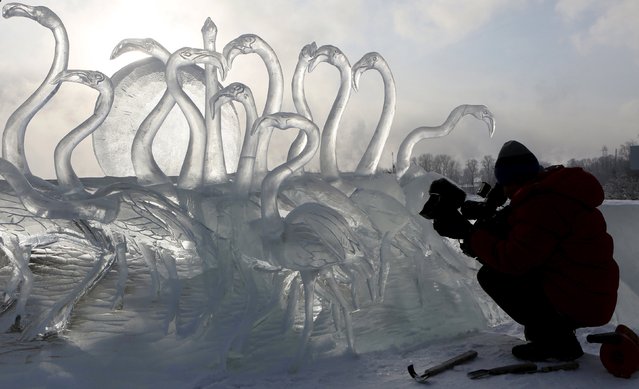 A cameraman takes video of an ice sculpture called “The Melody of Sunset”, created by participants from the city of Barnaul, during the annual International festival of snow and ice sculptures “The Magical Ice of Siberia”, on an embankment of the Yenisei river, with the air temperature at about minus 26 degrees Celsius (minus 14.8 degrees Fahrenheit), in Krasnoyarsk, Siberia, Russia, January 16, 2016. (Photo by Ilya Naymushin/Reuters) 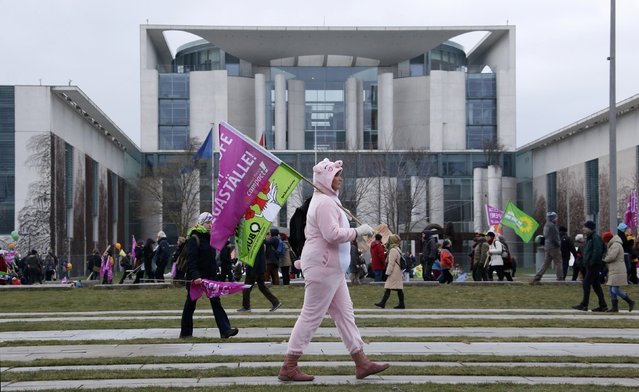 A protester walks with a flag during a demonstration of German farmers and consumer rights activists against mass animal husbandry and genetic engineering outside the Chancellery in Berlin, Germany, January 16, 2016. (Photo by Fabrizio Bensch/Reuters) 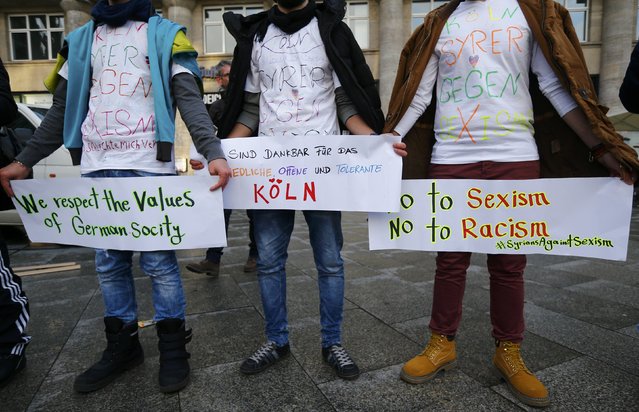 People from Syria hold placards during a rally outside the main railway station in Cologne, Germany, January 16, 2016, where the vast majority of dozens of New Year Eve assaults on women took place. (Photo by Wolfgang Rattay/Reuters) 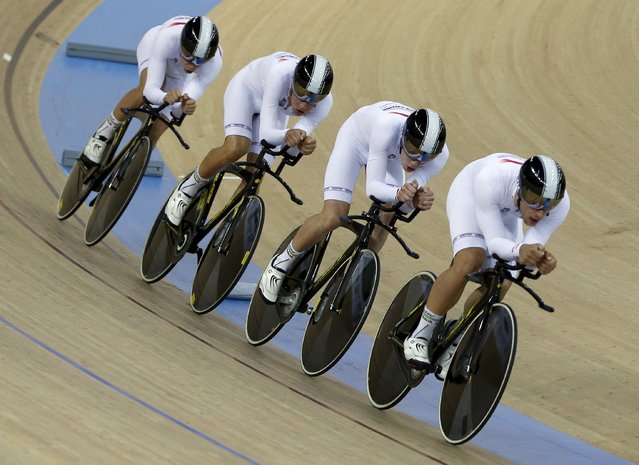 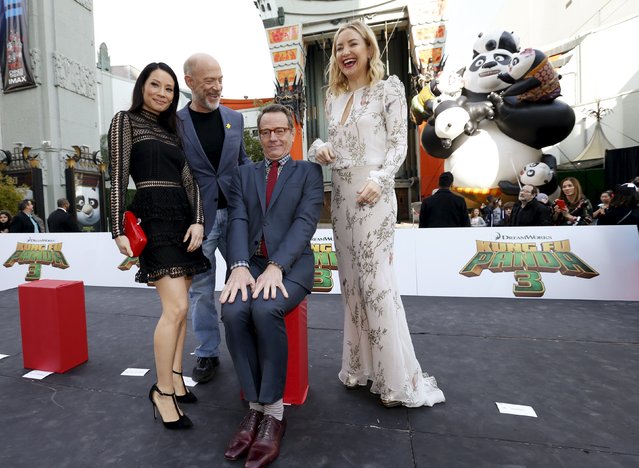 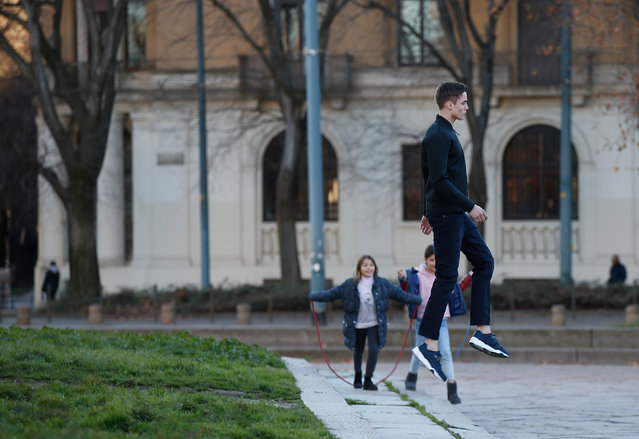 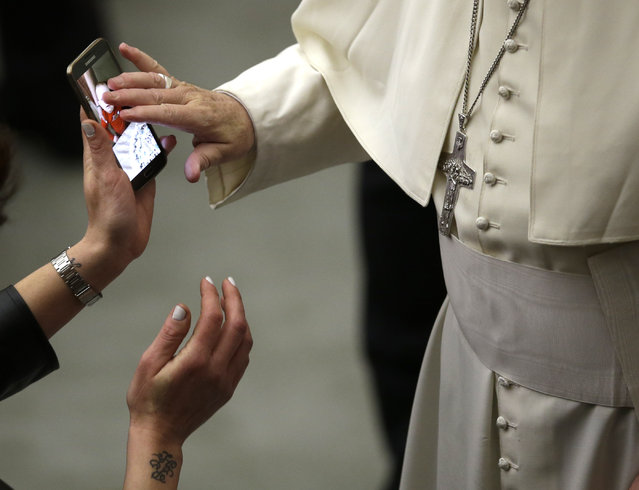 Pope Francis blesses a photo of a child displayed on a mobile phone at the end of a special audience with members of the Christian Workers' Movement in the Paul VI Hall at the Vatican, January 16, 2016. (Photo by Alessandra Tarantino/AP Photo)
Edit Del
17 Jan 2016 10:22:00, post received 0 comments
Publication archive:
←   →
Popular tags:
All tags
Last searches: