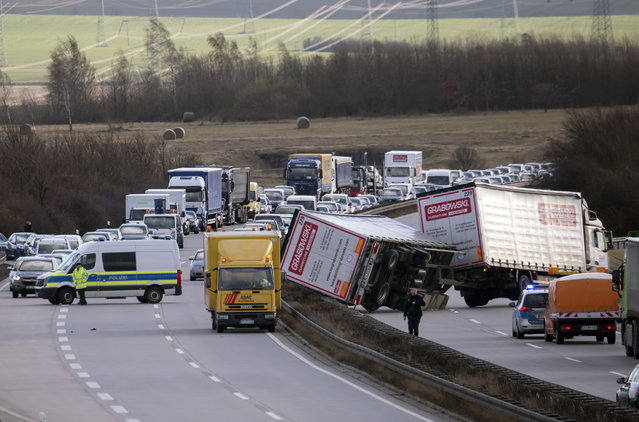 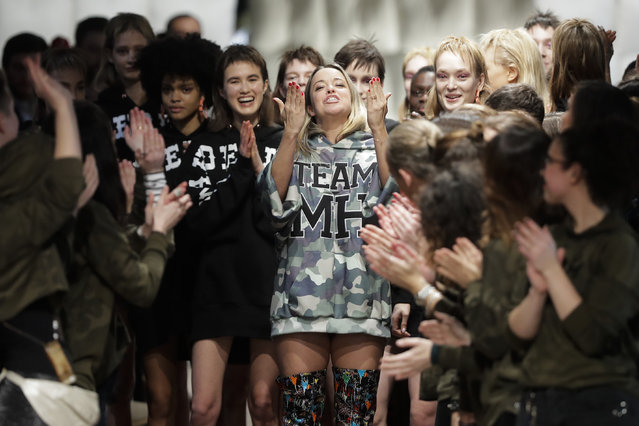 Designer Marina Hoermanseder, center, receives applause after the presentation of her Autumn/Winter 2018 collection as part of the Fashion Week in Berlin, Thursday, January 18, 2018. (Photo by Markus Schreiber/AP Photo) 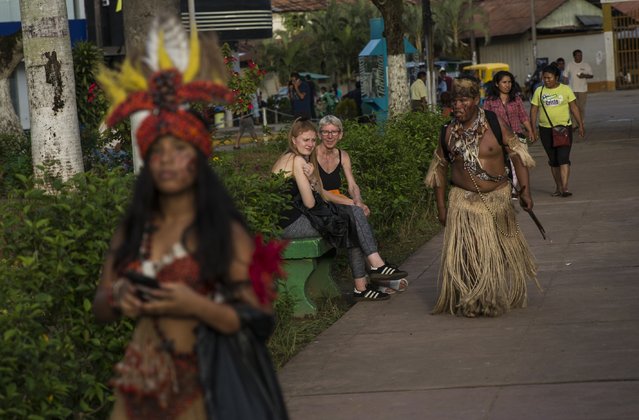 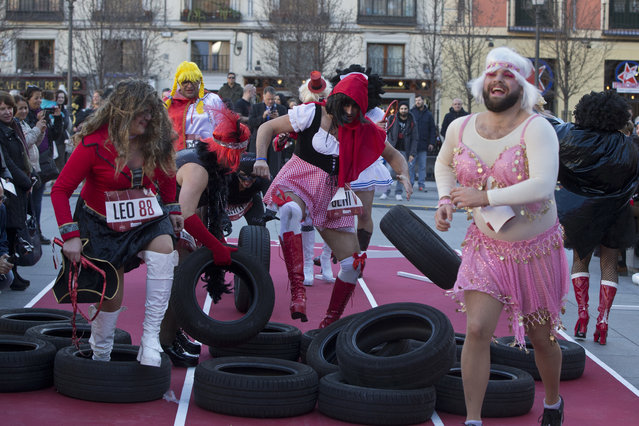 Competitors take part in a men's high heels race in Madrid, Spain, Thursday January 18, 2018. The event is to promote the carnival in Puerto de la Cruz on the Canary island of Tenerife as part of the FITUR international travel fair currently being held in the Spanish capital. (Photo by Paul White/AP Photo) 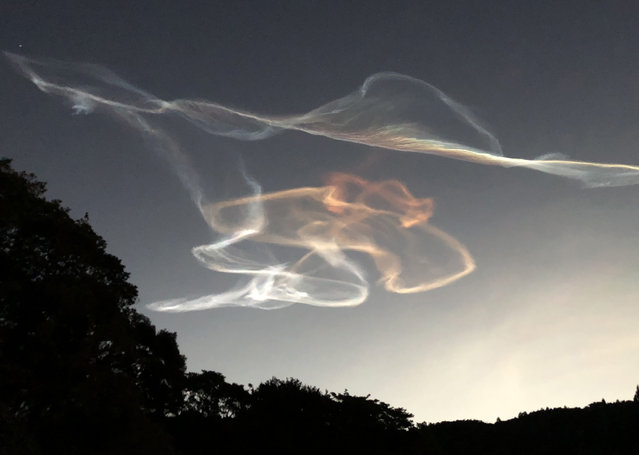 Smoke trails made by an Epsilon rocket are seen during the morning sunrise over Kimotsuki town in Kagoshima prefecture on January 18, 2018. The Epsilon rocket, carrying the ASNARO-2 radar satellite developed by NEC, was launched from the JAXA Uchinoura Space Centre on January 18. (Photo by AFP Photo/JIJI Press) 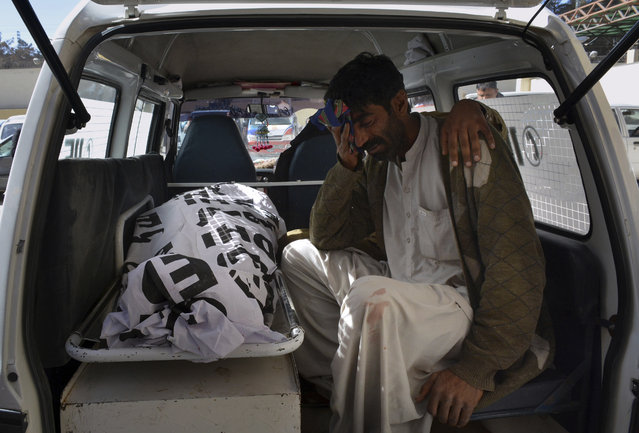 A relative mourns next to the body of a female polio vaccination worker, who was killed by gunmen, inside an ambulance at a hospital in Quetta, Pakistan, Thursday, January 18, 2018. Pakistani officials said gunmen have shot and killed a mother and her daughter who were taking part in an anti-polio campaign in the southwestern city of Quetta. (Photo by Arshad Butt/AP Photo) 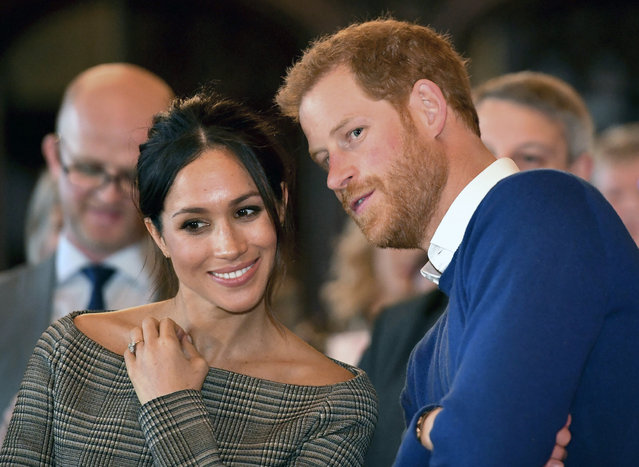 Britain's Prince Harry and Meghan Markle watch a dance performance by Jukebox Collective Cardiff Castle in Cardiff, Wales, Thursday, January 18, 2018. During their tour, Prince Harry and Ms. Markle will hear performances from musicians and poets, meet sportsmen and women, and see how organisations are working to promote Welsh language and cultural identity. (Photo by Ben Birchall/Pool Photo via AP Photo) 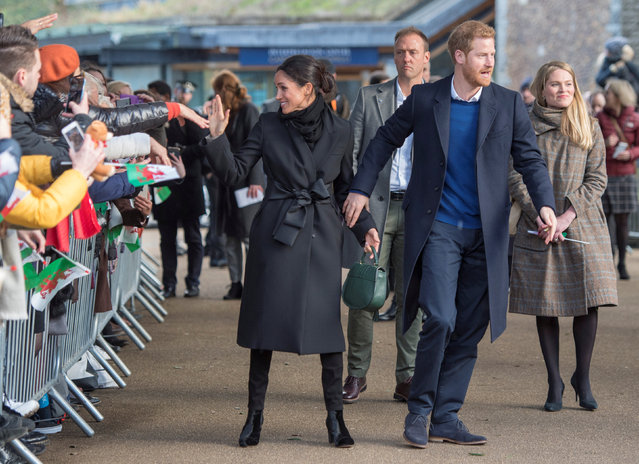 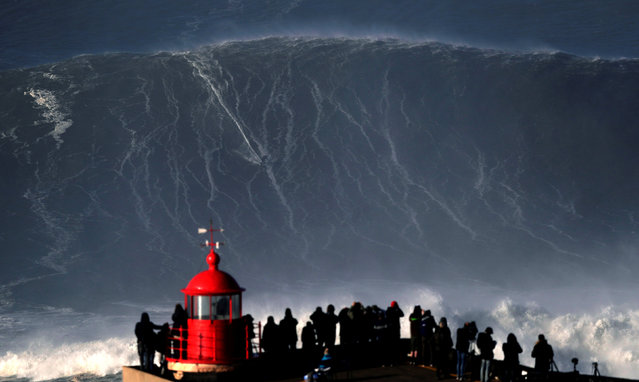 Big wave surfer Sebastian Steudtner of Germany drops in on a large wave at Praia do Norte in Nazare, Portugal, January 18, 2018. (Photo by Rafael Marchante/Reuters) 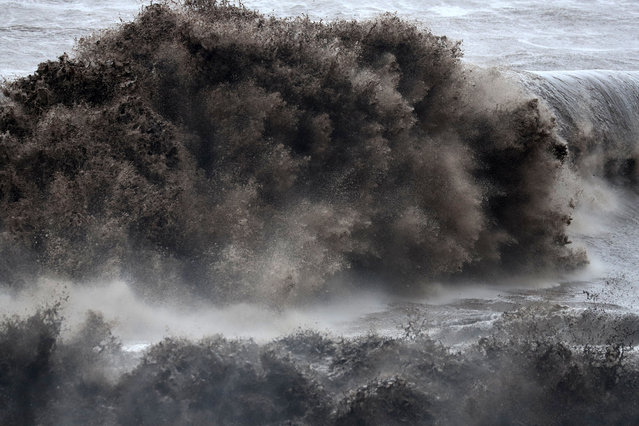 A wave strong wave hits the shore in Saint-Joseph, on the French Indian Ocean island of La Reunion, on January 18, 2018, as the tropical storm Beguitta passes near the island. The storm Berguitta approched La Reunion causing heavy rain in the southern part of the island in the night of January 17, continuing on January 18 damaging roads and causing the flooding of many waterways. (Photo by Richard Bouhet/AFP Photo) 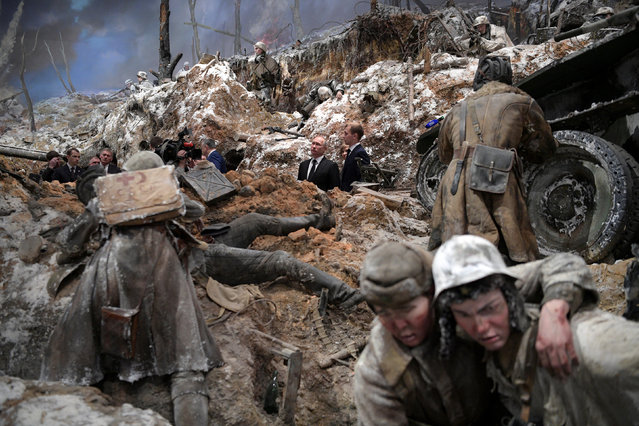 Russian President Vladimir Putin watches an exhibit dedicated to the breakthrough the Nazi Siege of Leningrad in the World War II, at a war museum in Kirovsk, in Leningrad region, Russia January 18, 2018. (Photo by Alexei Druzhinin/Reuters/Sputnik/Kremlin) 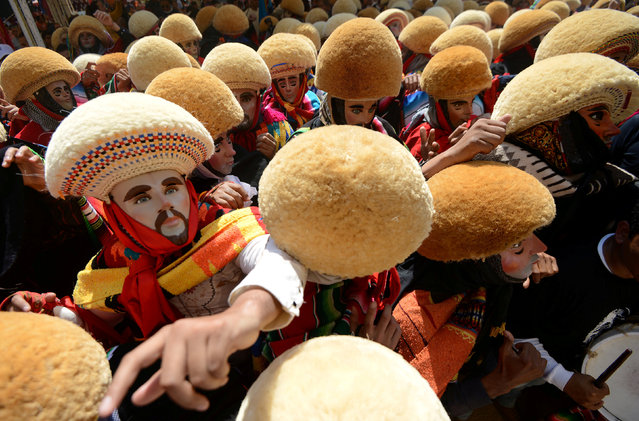 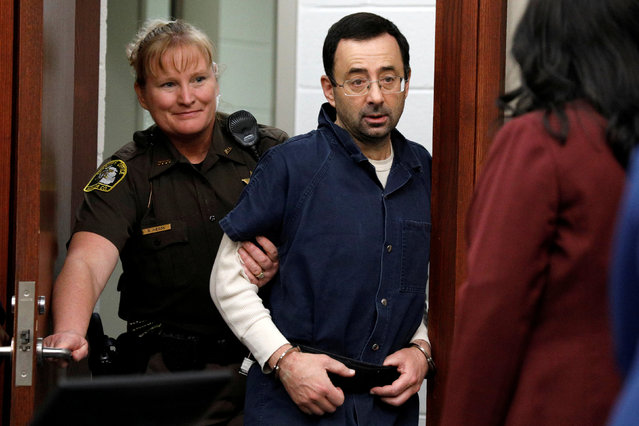 Larry Nassar, a former team USA Gymnastics doctor, who pleaded guilty in November 2017 to sexual assault charges, is escorted into the courtroom during his sentencing hearing in Lansing, Michigan, U.S., January 18, 2018. (Photo by Brendan McDermid/Reuters) 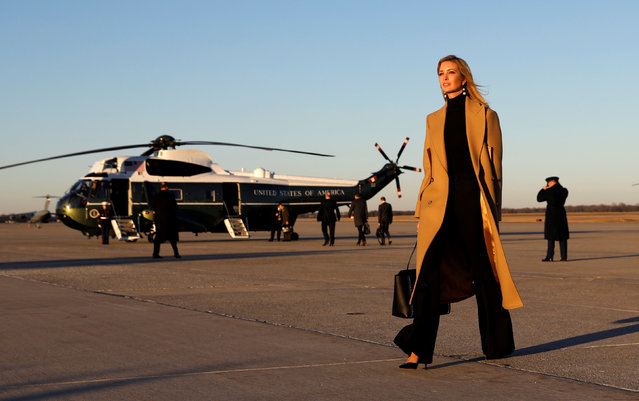 Ivanka Trump walks from Air Force One to a waiting vehicle upon arrival, as U.S. President Donald Trump boards Marine One in the background, at Joint Base Andrews in Maryland, U.S., January 18, 2018. (Photo by Kevin Lamarque/Reuters) 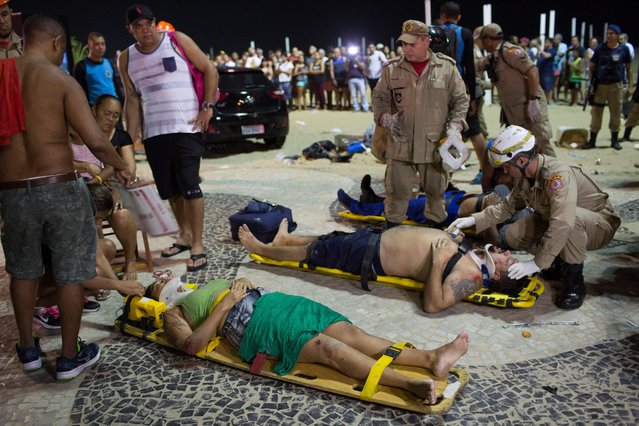 Firefighters give the first aid to people that were hurt after a car drove into the crowded seaside boardwalk along Copacabana beach in Rio de Janeiro, Brazil, Thursday, January 18, 2018. Military police said on Twitter that at least 11 people were injured and that the driver has been taken into custody. (Photo by Silvia Izquierdo/AP Photo) 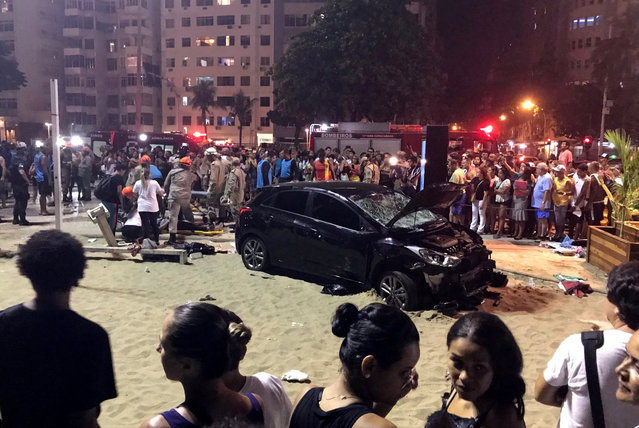 A vehicle that ran over some people at Copacabana beach is seen in Rio de Janeiro, Brazil January 18, 2018. According local media, the driver was detained. (Photo by Sebastian Rocandio/Reuters) 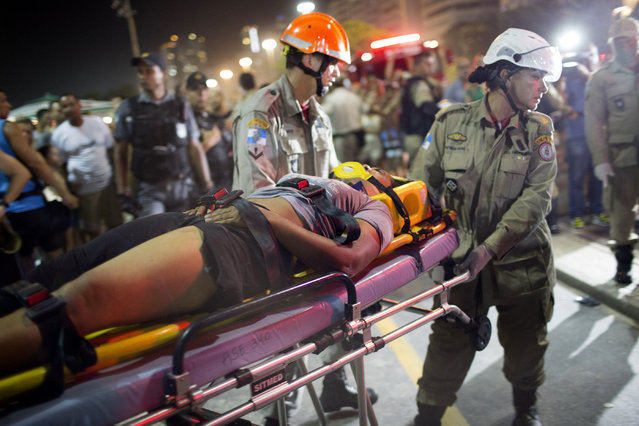 Firefighters carry a woman on a stretcher after a car drove into the crowded seaside boardwalk along Copacabana beach in Rio de Janeiro, Brazil, Thursday, January 18, 2018. Military police said on Twitter that at least 11 people were injured and that the driver has been taken into custody. (Photo by Silvia Izquierdo/AP Photo) 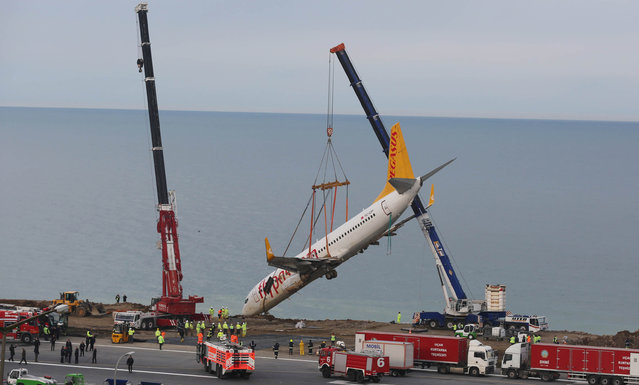 A Pegasus Airlines Boeing 737-800 aircraft, which was skidded off the runway on Saturday, January 13, 2018, is lifted by a crane at Trabzon airport by the Black Sea in Trabzon, Turkey January 18, 2018. (Photo by Reuters/Dogan News Agency) 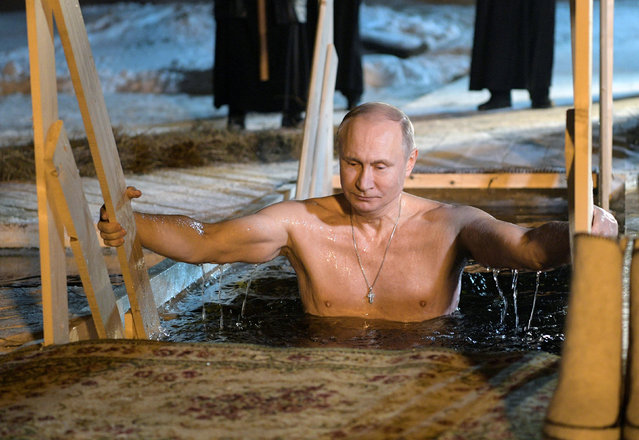 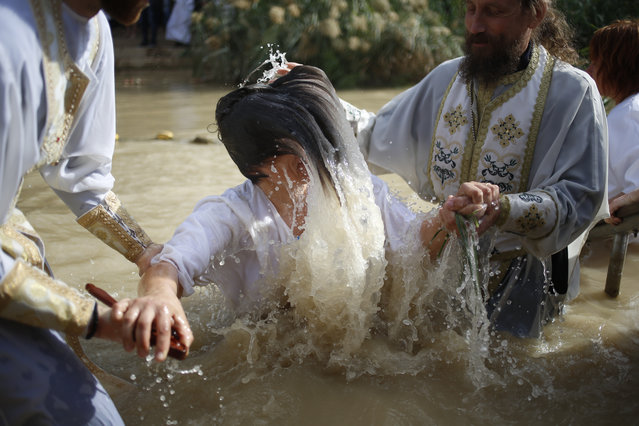 A Christian Orthodox priest re-enacts the baptism of Jesus, during the traditional Epiphany baptism ceremony at the Qasr-el Yahud baptism site in the Jordan river, near the West Bank town of Jericho, Thursday, January 18, 2018. (Photo by Ariel Schalit/AP Photo) 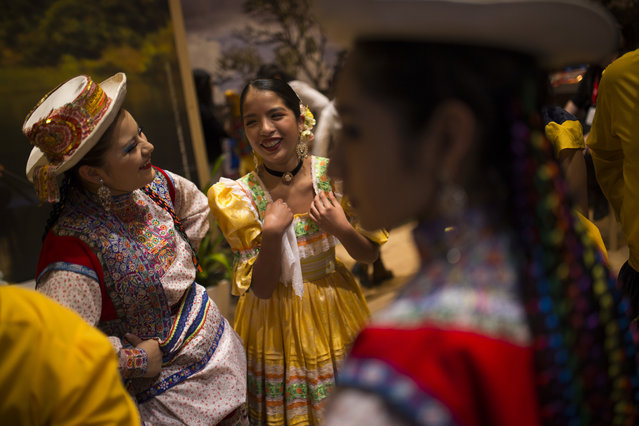 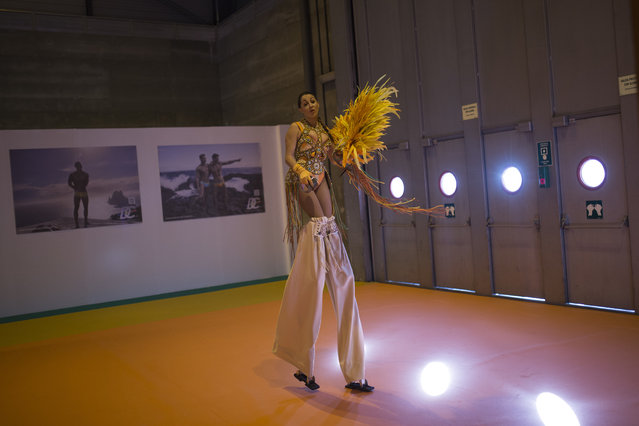 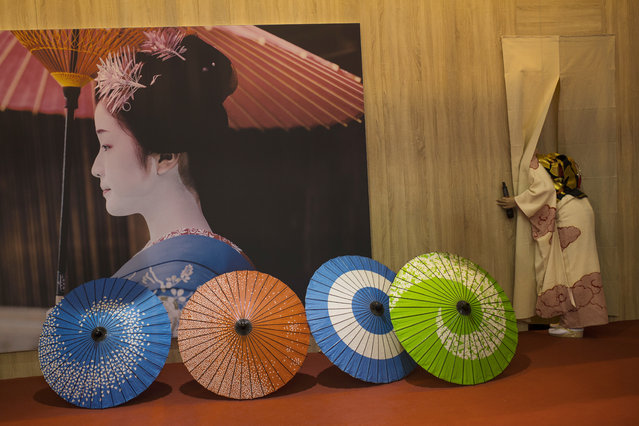 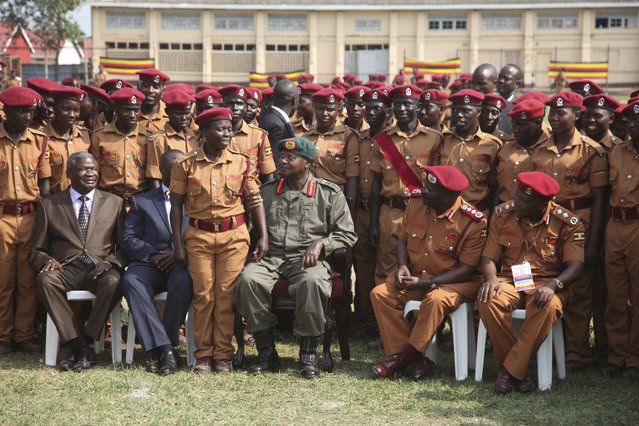 Uganda President Yoweri Museveni, center in military uniform, with senior government officers and prison wardens pose for a photograph during a graduation ceremony in the capital Kampala Thursday January 18, 2018. Uganda's president says he will sign the death warrants of “a few” prisoners to create fear among criminals in the East African country. (Photo by Stephen Wandera/AP Photo) 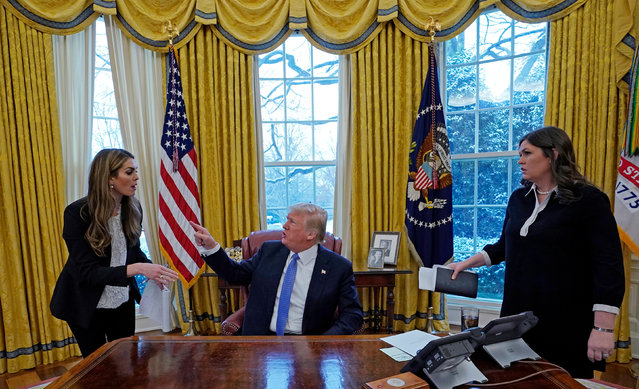 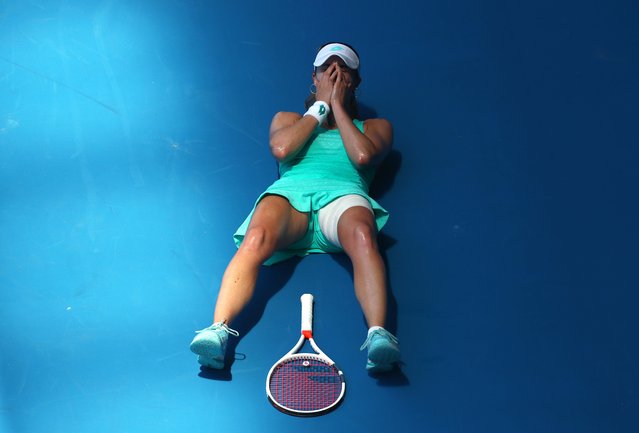 Alize Cornet of France reacts as she lies on the court during her match against Elise Mertens of Belgium on day five of the Australian Open tennis tournament in Melbourne on January 19, 2018. (Photo by Reuters/Stringer)
Edit Del
19 Jan 2018 09:16:00, post received 0 comments
Publication archive:
←   →
Popular tags:
All tags
Last searches: