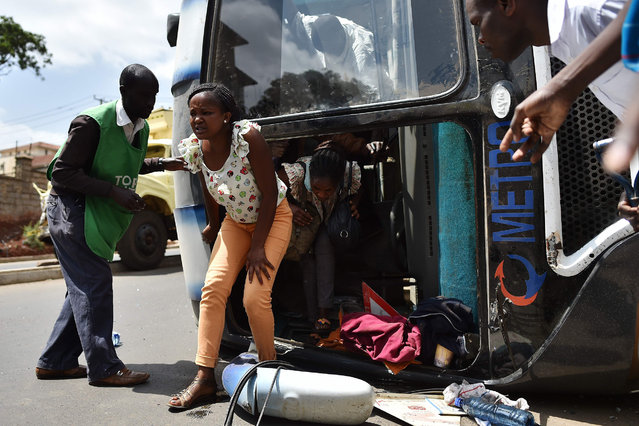 An injured passenger walks out the wreckage of a bus that tipped onto its side following a collision with a lorry in Nairobi on January 12, 2018. A speeding lorry ferrying soil crashed into the side of the bus on the intersection of James Gichuru and Gitanga road in the capital Nairobi's Lavington suburb leaving the bus on its side and passengers with flesh wounds. (Photo by Tony Karumba/AFP Photo) 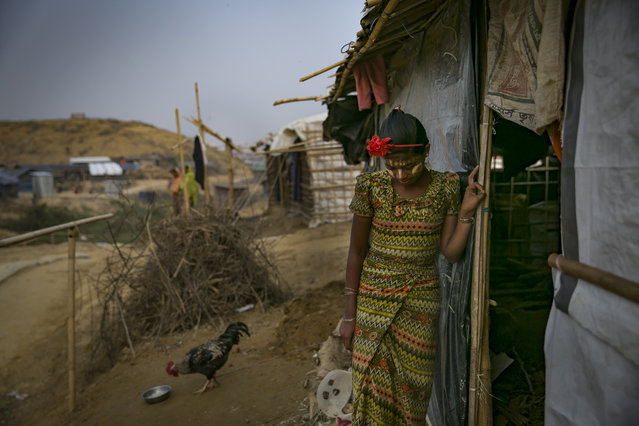 Rohingya refugees are seen in Balukhali camp on January 14, 2018 in Cox's Bazar, Bangladesh. Over 650,000 Rohingya have crossed the border to Bangladesh since August last year, fleeing the violence at Rakhine State when their villages were attacked and many worry that they will face further reprisals if they return to Myanmar. The refugee camps in Bangladesh no longer seem temporary as thousands of tents made of plastic and bamboo spread across the undulating terrain and long wooden bridges connect parts of the camps divided by water. Existing camps such as Nayapara and Kutupalong have swelled to accommodate the new arrivals since the Myanmar military began its campaign in late August while the Rohingya queue for hours to get rations due to little access to clean water, health care or food and the refugee camps turn into mud-baths whenever it rains. International aid groups and health workers have estimated at least 6,700 Rohingya had met with violent deaths and warn of potential outbreaks of cholera and other preventable diseases due to squalid conditions. (Photo by Allison Joyce/Getty Images) 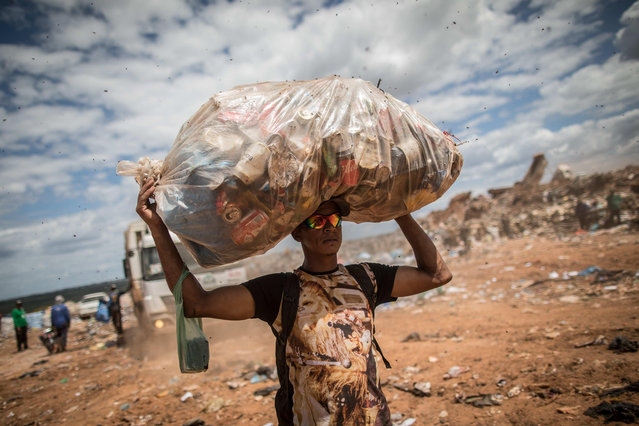 People, known as “catadores de lixo” or recyclable material collectors, work at “Lixao da Estrutural”, the biggest garbage dump in Latin America, in Brasilia, Brazil, 18 January 2018. The dump, which receives 1,800 tons of waste every day, will close its doors on 20 January. (Photo by Andre Coelho/EPA/EFE) 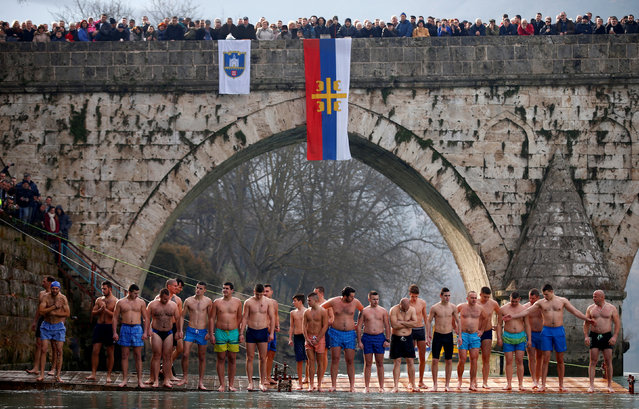 Men wait before a swim to try retrieve a cross from the water during Epiphany Day celebrations in Visegrad, Bosnia and Herzegovina, January 19, 2018. (Photo by Dado Ruvic/Reuters) 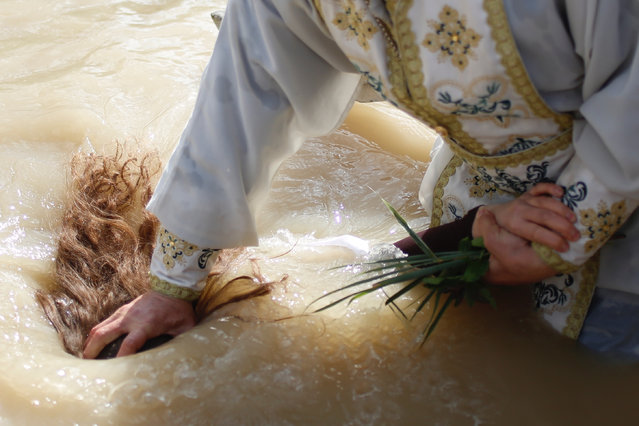 A Christian Orthodox priest re-enacts the baptism of Jesus, during the traditional Epiphany baptism ceremony at the Qasr-el Yahud baptism site, in the Jordan river near the West Bank town of Jericho, Thursday, January 18, 2018. (Photo by Ariel Schalit/AP Photo) 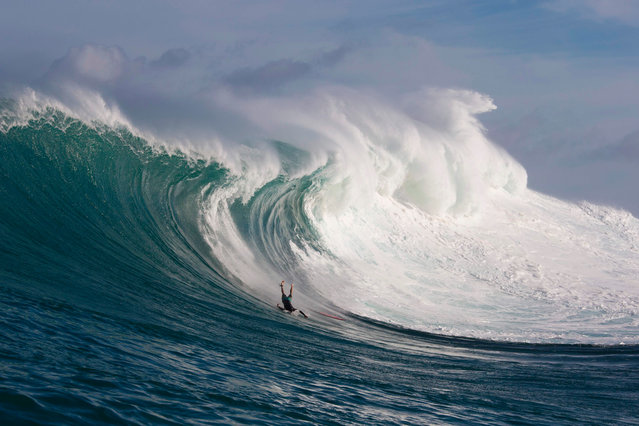 A surfer wipes out at Pe'ahi, also known as Jawsi, Hawaii during big wave surfing on January 14, 2018. (Photo by Brian Bielmann/AFP Photo) 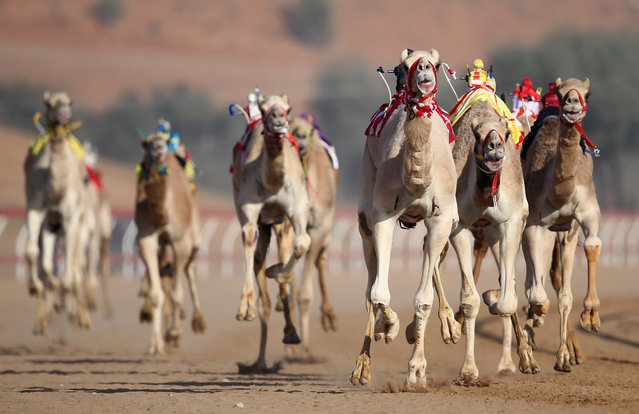 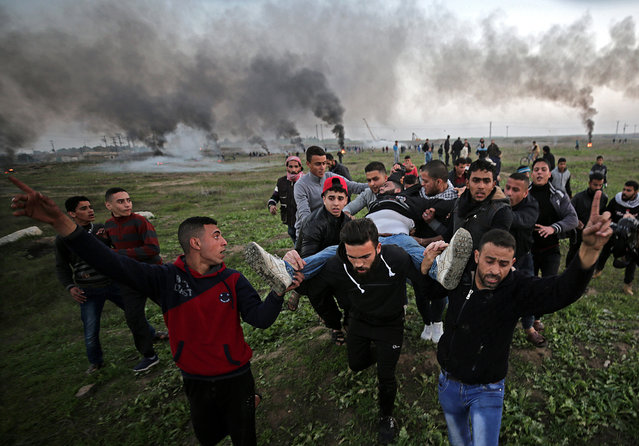 Palestinian protesters carry a wounded young man during clashes between Israeli troops and Palestinians near the border in eastern Gaza City, 12 January 2018. More than forty Palestinians protesters were injured during the clashes east of Gaza Strip. (Photo by Mohammed Saber/EPA/EFE) 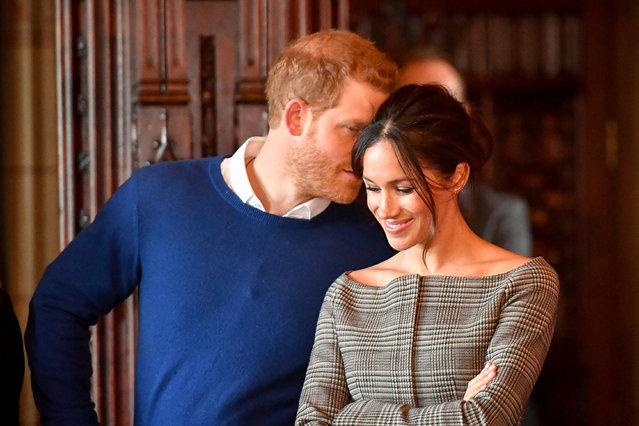 Britain's Prince Harry whispers to Meghan Markle as they watch a performance by a Welsh choir in the banqueting hall during a visit to Cardiff Castle in Cardiff, United Kingdom on January 18, 2018. (Photo by Ben Birchall/Reuters) 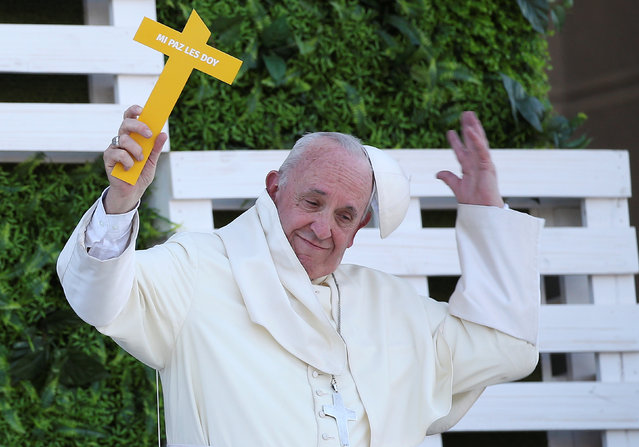 A gust of wind blows Pope Francis's skullcap off as he holds a cross during a meeting with youth in Santiago, Chile on January 17, 2018. (Photo by Alessandro Bianchi/Reuters) 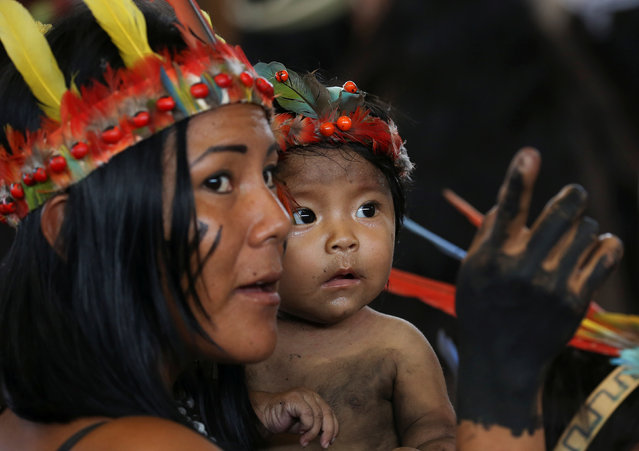 Members of an indigenous group from the Amazon region attend a meeting with Pope Francis at the Coliseo Regional Madre de Dios in Puerto Maldonado, Peru on January 19, 2018. (Photo by Alessandro Bianchi/Reuters) 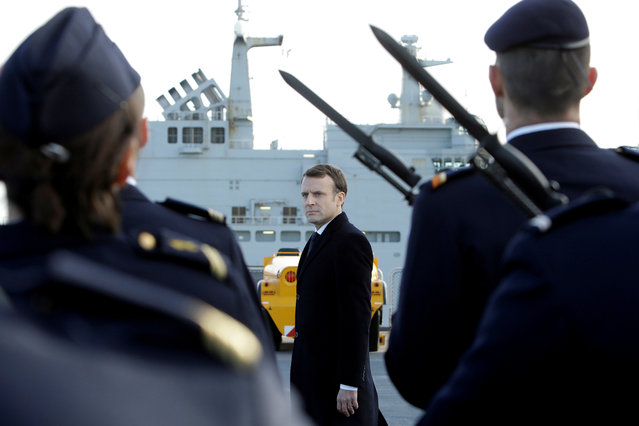 French President Emmanuel Macron reviews an honor guard upon his arrival on board of the French war ship Dixmude docked in the French Navy base of Toulon, southern France on January 19, 2018, before delivering a speech to present his New Year's wishes to the French Army. (Photo by Claude Paris/Reuters) 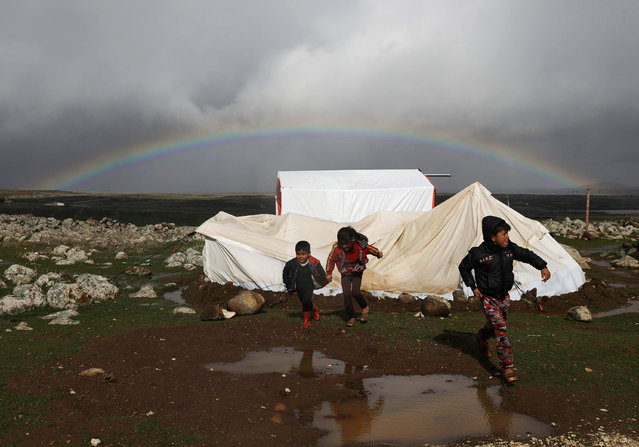 A rainbow is seen over Quneitra as internally displaced children run at a refugee camp in Quneitra, Syria, January 19, 2018. (Photo by Alaa Al-Faqir/Reuters) 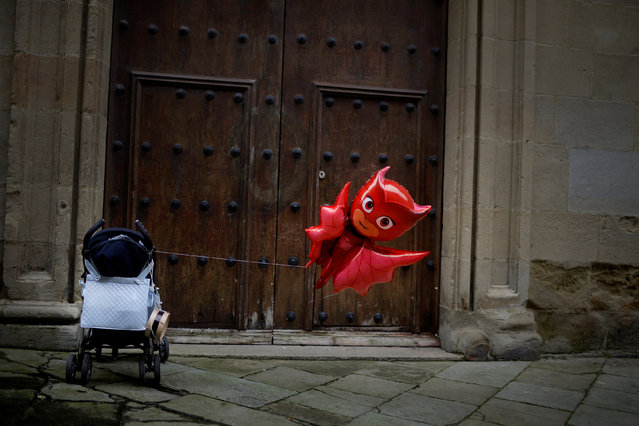 A balloon is tied to a child's push chair during the Tamborrada on the Day of San Sebastian, in which people dressed as Napoleonic era soldiers and cooks perform in a twenty four hour drum and wine barrel playing session, interspersed with eating and drinking, in the Basque coastal town of San Sebastian, Spain, January 20, 2018. (Photo by Vincent West/Reuters) 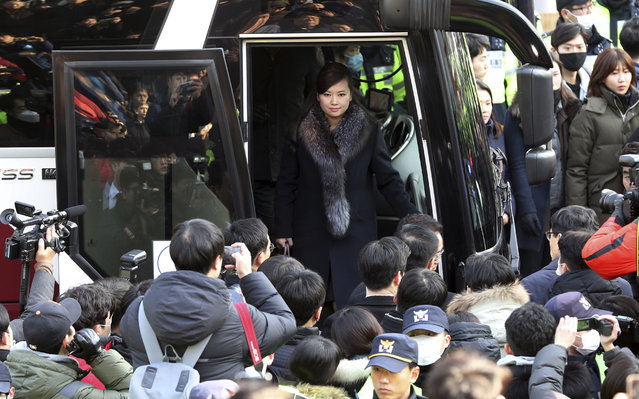 North Korean Hyon Song Wol, head of a North Korean art troupe, gets off a bus as she arrives at the Seoul Train Station in Seoul, South Korea, Sunday, January 21, 2018. The head of a hugely popular girl band arrived in South Korea on Sunday across the rivals' heavily fortified border to check preparations for a Northern art troupe she also leads during next month's Winter Olympics in South Korea. (Photo by Kim Sun-ung/Newsis via AP Photo) 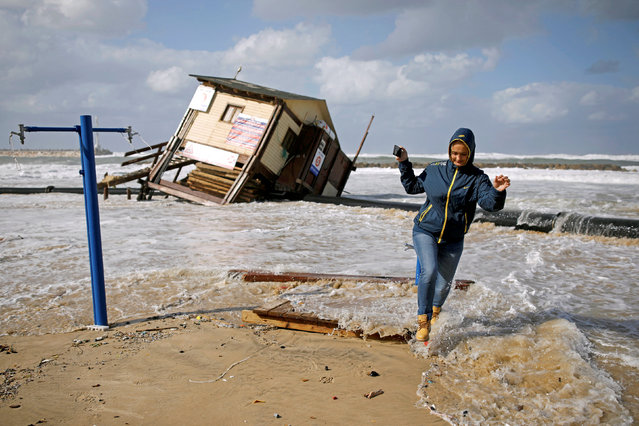 A woman runs away from a wave next to a lifeguard tower that collapsed during a storm, in the Mediterranean coast of the city of Ashkelon, Israel January 19, 2018. (Photo by Amir Cohen/Reuters) 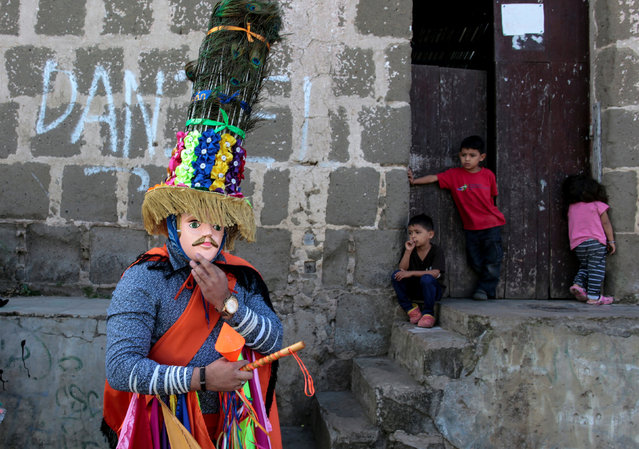 A dancer prepares to participate in the celebration of the feast honouring Saint Sebastian in Diriamba, Nicaragua January 19, 2018. (Photo by Oswaldo Rivas/Reuters) 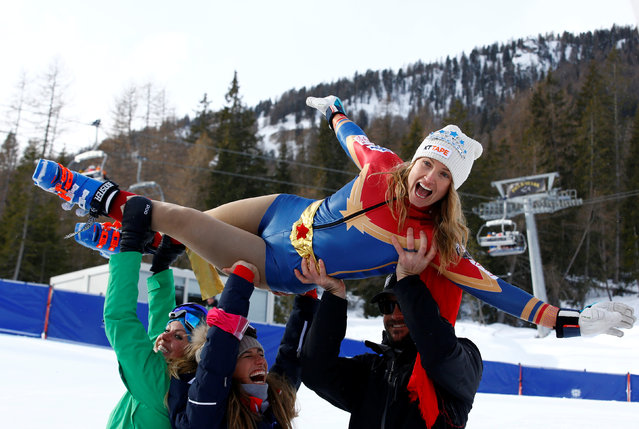 Julia Mancuso (top) of the USA wearing a “Wonder Woman” ski suit is celebrated by members of the US ski team after the FIS Alpine World Cup Women' s Downhill replacing Val d' Isere event on January 19, 2018 in Cortina d' Ampezzo, Italian Alps. Four- time Olympic medallist Julia Mancuso has announced she will retire from alpine skiing after a farewell run in the women' s World Cup downhill in Cortina d' Ampezzo. (L) Lindsey Vonn. The 33- year- old American has battled a degenerative hip problem and failed to qualify for a fifth Winter Olympics in South Korea next month. (Photo by Stefano Rellandini/Reuters) 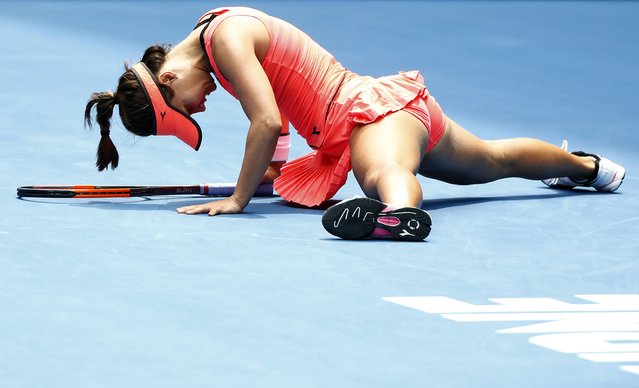 Lauren Davis of the US falls during their women' s singles third round match against Romania' s Simona Halep on day six of the Australian Open tennis tournament in Melbourne on January 20, 2018. (Photo by Thomas Peter/Reuters) 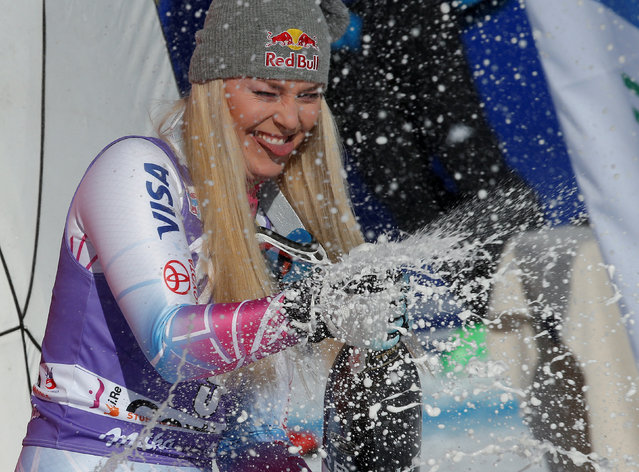 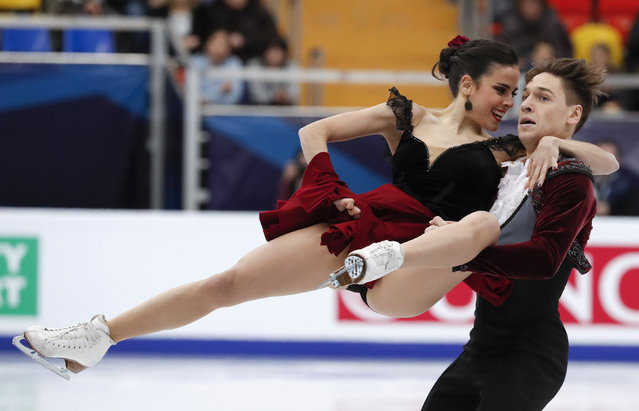 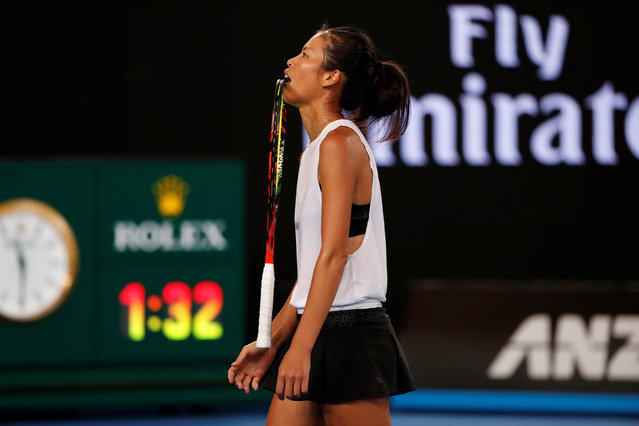 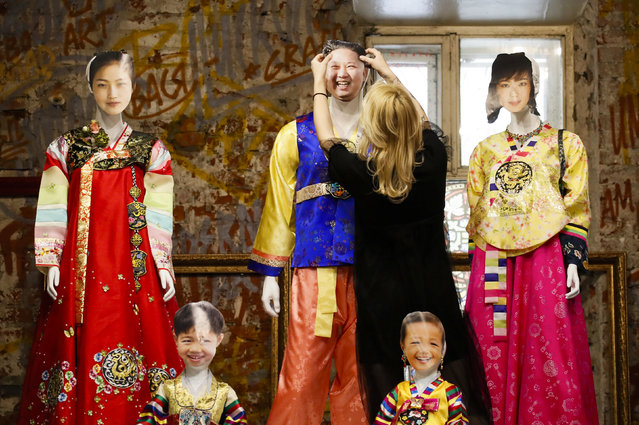 An employee attaches a mask, depicting North Korean leader Kim Jong Un, to a mannequin at the “Made In North Korea” exhibition held at the UMAM museum in Moscow, Russia January 20, 2018. (Photo by Maxim Shemetov/Reuters) 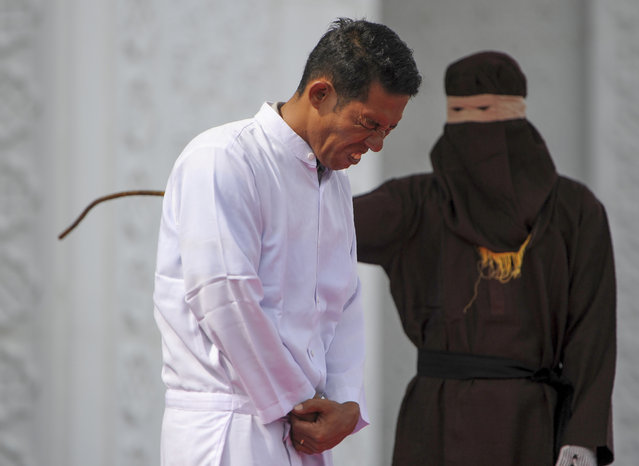 Jono Simbolon (front), an Indonesian Christian, grimaces in pain as he is flogged in front of a crowd outside a mosque in Banda Aceh, Aceh province, on January 19, 2018. Simbolon was publicly flogged on January 19 for selling alcohol in conservative Aceh province, a violation of Islamic law, as a crowd of onlookers including children jeered. (Photo by Chaideer Mahyuddin/AFP Photo) 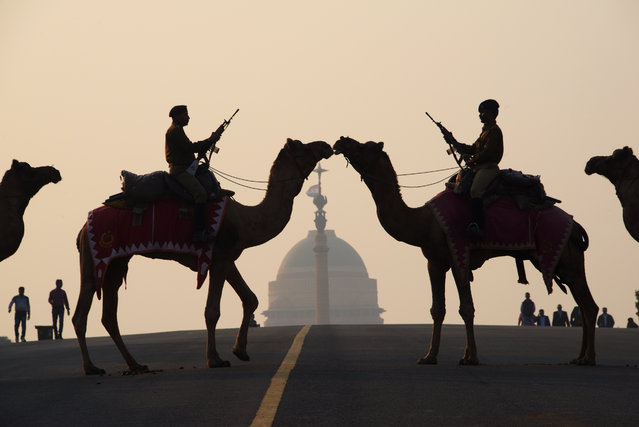 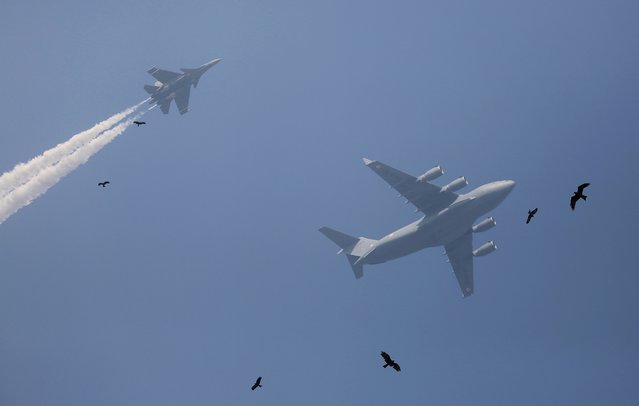 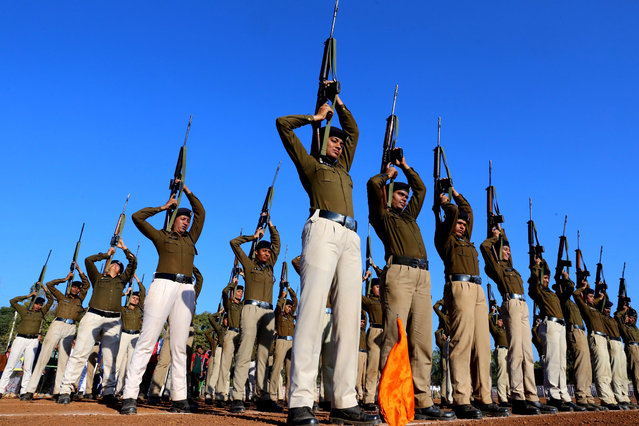 Indian women police officers participate in the rehearsal for the upcoming 69th Republic Day celebration parade, in Bhopal, India, 19 January 2018. Republic Day, observed on 26 January each year, marks the adoption of the constitution and the transition of India from British regime to a republic on 26 January 1950. (Photo by Sanjeev Gupta/EPA/EFE) 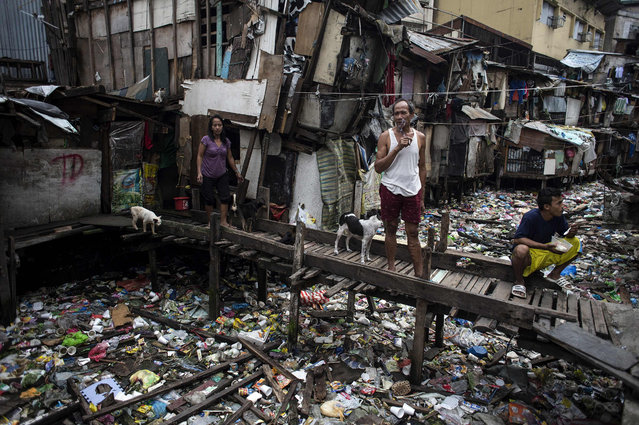 Residents rest on a wooden bridge over a garbage- filled waterway in Manila, Philippines on January 17, 2018. (Photo by Noel Celis/AFP Photo) 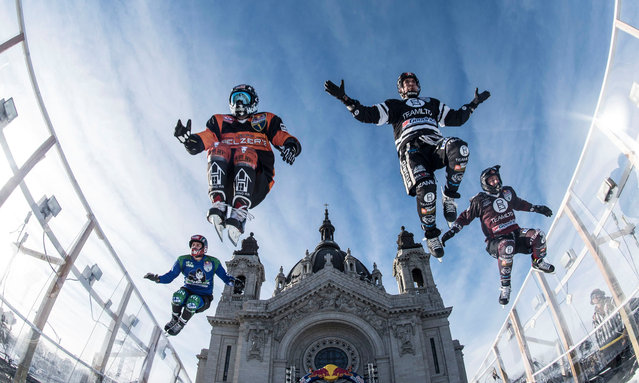 A handout photo made available by Limeximages showing (L-R) Maxwell Dunne and Cameron Naazs of the United States and Scott Croxall and Kyle Croxall of Canada perform during a trainings session at the first stage of the ATSX Ice Cross Downhill World Championship at the Red Bull Crashed Ice in Saint Paul, United States 18 January 2018, (issued 19 January 2018). (Photo by Joeg Mitter/EPA/EFE /Limeximages) 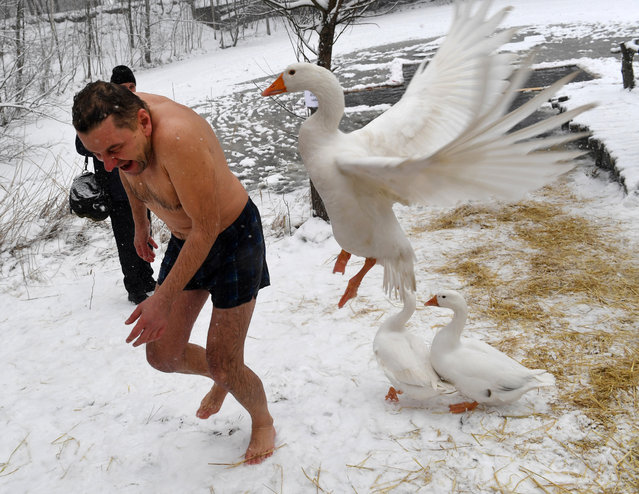 A goose attacks an Orthodox believer as he leaves the icy waters of a pond during the celebration of the Orthodox Epiphany holiday in Kiev on January 19, 2018. Thousands of Ukrainian Orthodox Church followers plunged into icy rivers and ponds across the country to mark Epiphany, cleansing themselves with water deemed holy for the day. (Photo by Sergei Supinsky/AFP Photo)
Edit Del
21 Jan 2018 08:43:00, post received 0 comments
Publication archive:
←   →
Popular tags:
All tags
Last searches: