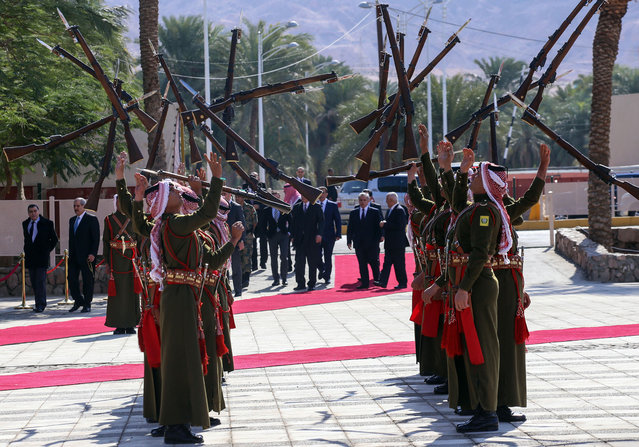 Jordanian honor guards put on a show during a ceremony marking the 100th anniversary of the Great Arab Revolt against the regions ruling Ottoman Turks, January 23, 2016 in the southern city of Aqaba, Jordan. Upon a directive by the King, Great Arab revolt centennial celebrations will be held countrywide throughout 2016 at both popular and official levels. (Photo by Raad Adayleh-Pool/Getty Images) 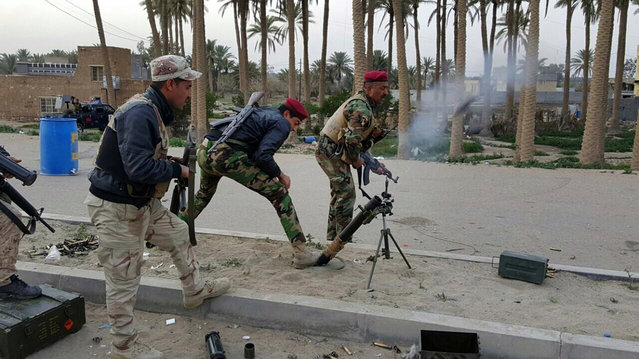 Iraqi security forces fire at Islamic State group positions during clashes in Ramadi, 70 miles (115 kilometers) west of Baghdad, Iraq, Saturday, January 23, 2016. The Islamic State group, which controls large parts of Syria and Iraq where it declared an Islamic caliphate in June 2014, suffered several defeats recently in both countries, including the loss of the Iraqi city of Ramadi and parts of northern and northeastern Syria over the past months. (Photo by AP Photo) 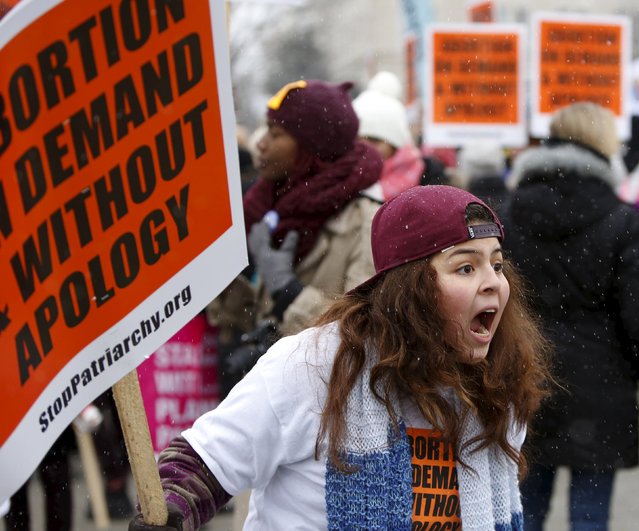 A pro-abortion supporter yells at anti-abortion supporters (not pictured) in front of the Supreme Court during the National March for Life rally in Washington January 22, 2016. The rally marks the 43rd anniversary of the U.S. Supreme Court's 1973 abortion ruling in Roe v. Wade. (Photo by Gary Cameron/Reuters) 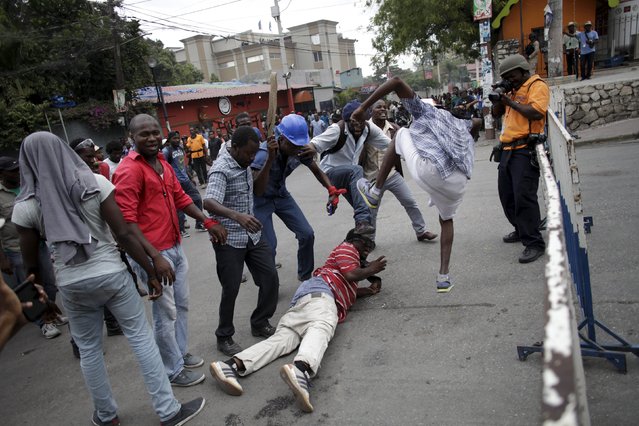 Protesters, who were mocking National Police officers (not pictured), simulate a beating during a demonstration against the electoral process in Port-au-Prince, Haiti, January 22, 2016. Haiti postponed a U.S.-backed presidential election as violent protests erupted on Friday after the opposition candidate vowed to boycott the vote over alleged fraud. (Photo by Andres Martinez Casares/Reuters) 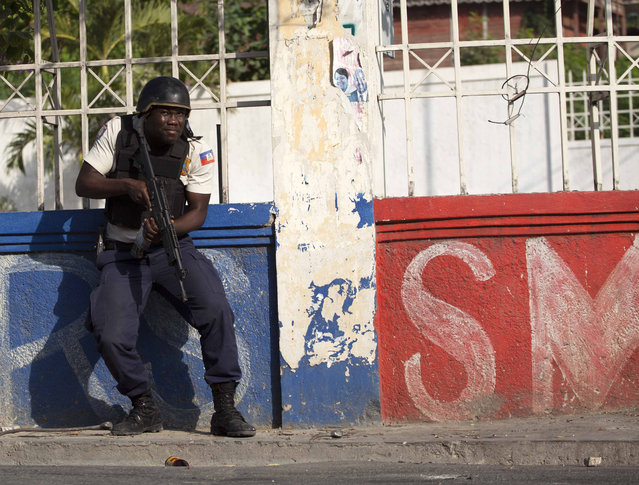 A National Police officer takes position as police work to disperse a crowd protesting against President Michel Martelly's government, in Port-au-Prince, Haiti, Saturday, January 23, 2016. A presidential runoff that had already been delayed once and faced deep public skepticism was put on hold indefinitely Friday. The Saturday protesters are demanding that Martelly leave office Feb. 7, as is required under the Constitution, and an interim government take power. (Photo by Dieu Nalio Chery/AP Photo) Miss Universe 2015 Pia Wurtzbach of the Philippines removes her sunglasses before speaking to the media, after her arrival at the Ninoy Aquino International Airport in Pasay City, Metro Manila January 23, 2016. (Photo by Erik De Castro/Reuters) 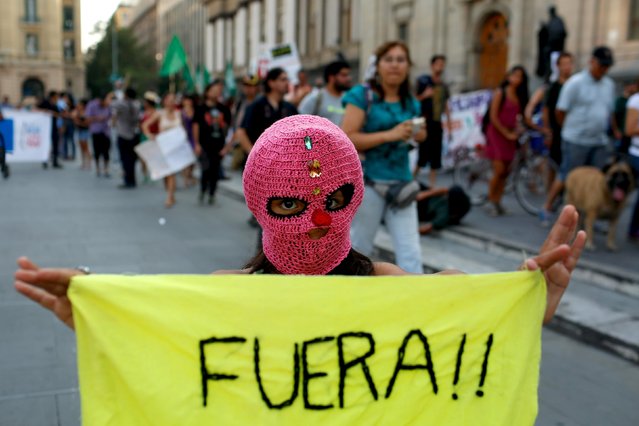 A child wearing a hood holds a banner that reads “Out!” during a protest against the TPP (Trans-Pacific Partnership) and Monsanto Co, the world's largest seed company at Santiago, Chile, January 22, 2016. (Photo by Pablo Sanhueza/Reuters) 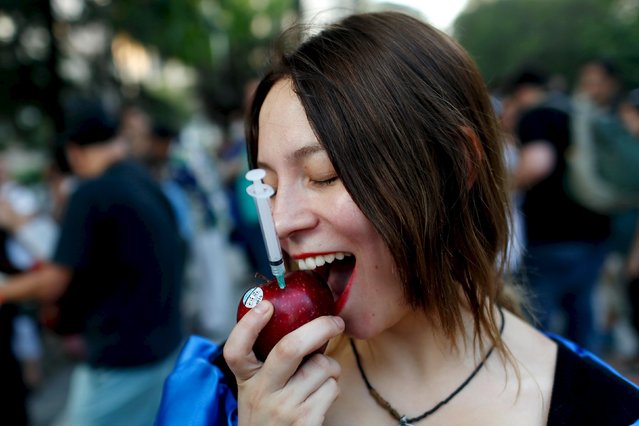 An activist pretends to eat an apple during a protest against the TPP (Trans-Pacific Partnership) and Monsanto Co, the world's largest seed company at Santiago, Chile, January 22, 2016. (Photo by Pablo Sanhueza/Reuters) 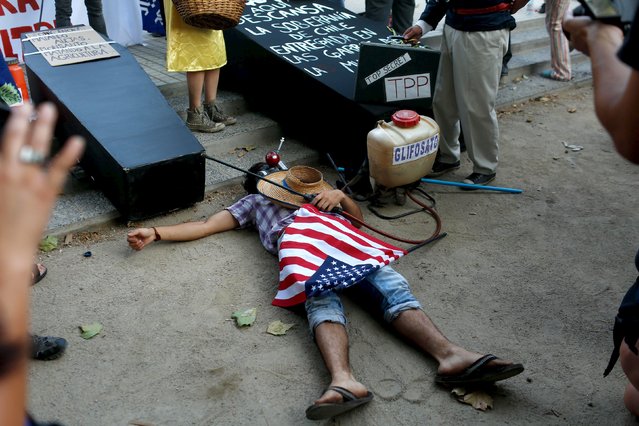 An activist depicting a farmer lies on the ground covered by a U.S. national flag during a protest against the TPP (Trans-Pacific Partnership) and Monsanto Co, the world's largest seed company at Santiago, Chile, January 22, 2016. The sign on the mock coffin reads (R), “Here rests the sovereignty of Chile, delivered in the claws of the multinational”. (Photo by Pablo Sanhueza/Reuters) 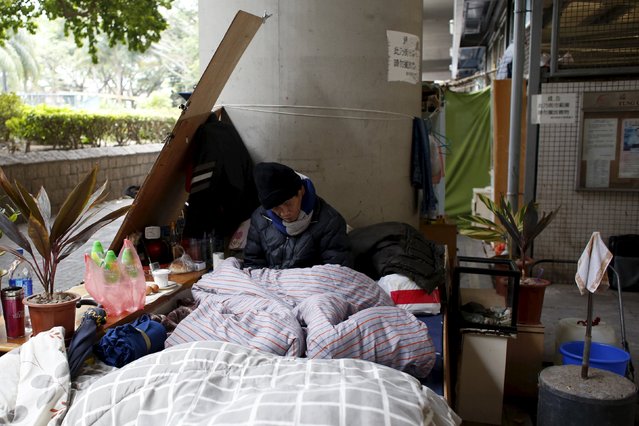 A street sleeper takes a nap under a bridge at a residential area in Hong Kong, China, January 23, 2016. Hong Kong Observatory said on Friday that temperatures will fall to around 6 degrees Celsius or below in the urban areas in a couple of days. (Photo by Bobby Yip/Reuters) 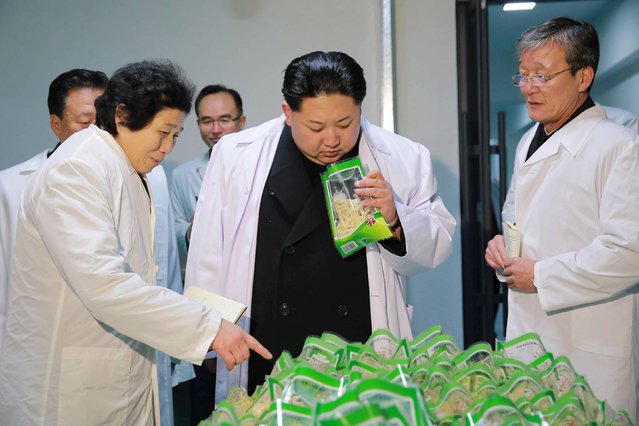 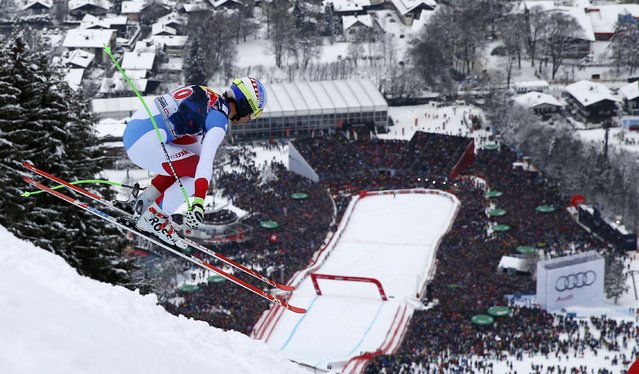 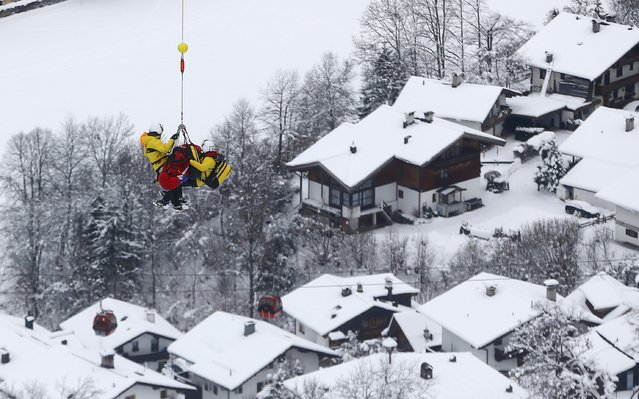 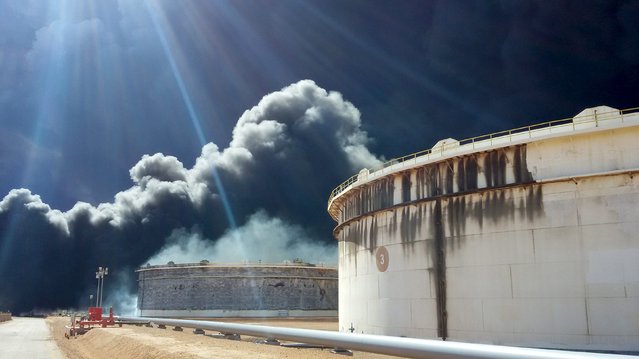 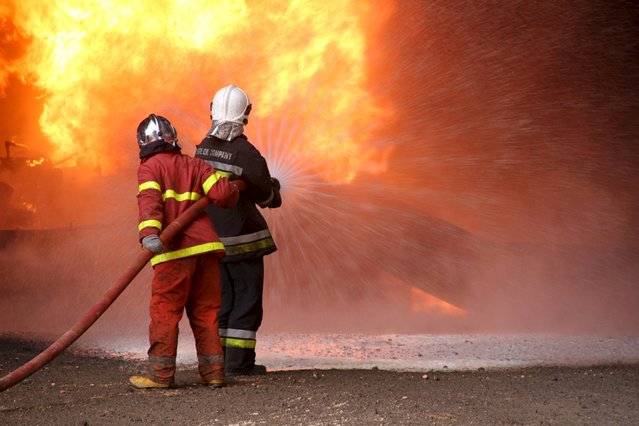 Firefighters try to put out the fire in an oil tank in the port of Es Sider, in Ras Lanuf, Libya January 23, 2016. (Photo by Reuters/Stringer) 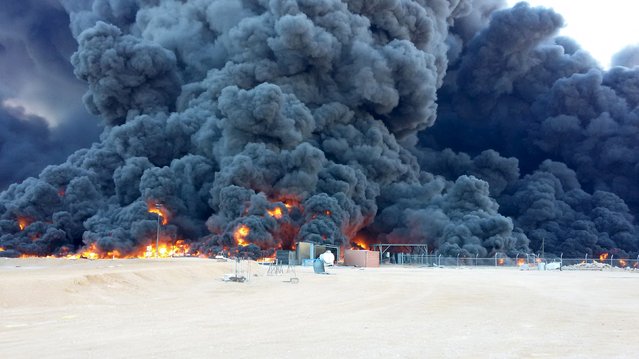 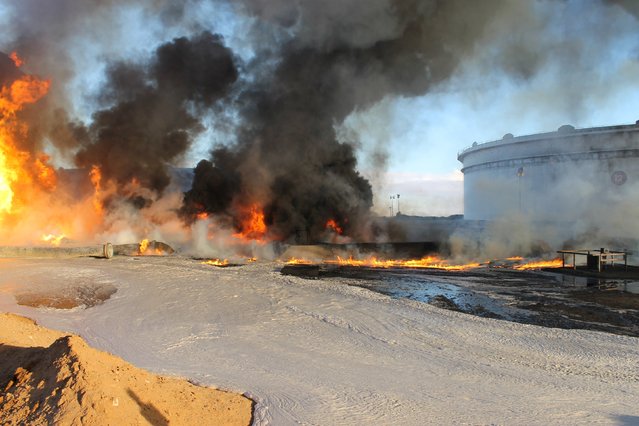 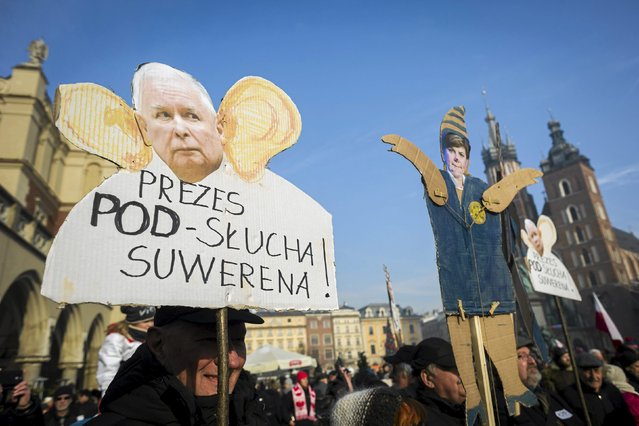 Anti-racist Loldiers of Odin clowns speak with police as they take to the streets against anti-immigration marchers in Tampere, Finland January 23, 2016. Police prevented the groups from confronting each other. On the northern fringes of Europe, Finland has little history of welcoming large numbers of refugees, unlike neighbouring Sweden. But as with other European countries, it is now struggling with a huge increase in asylum seekers and the authorities are wary of any anti-immigrant vigilantism. (Photo by Kalle Parkkinen/Reuters/Lehtikuva) 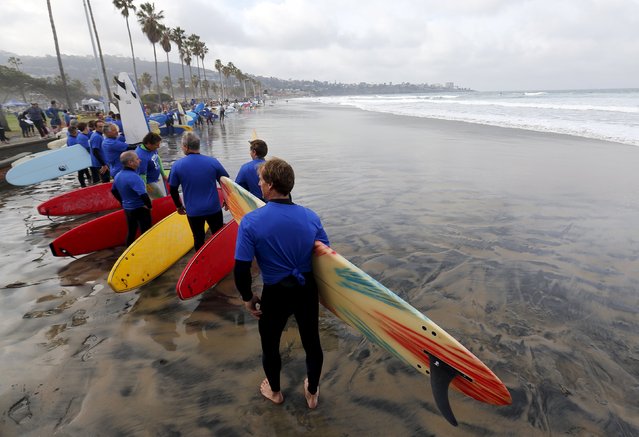 Surfers hold their boards as they gather in an attempt to surpass the world record for the most number of surfers riding one wave in La Jolla, California January 23, 2016. The current record of 110 surfers was set six years ago in Cape Town, South Africa. (Photo by Mike Blake/Reuters) 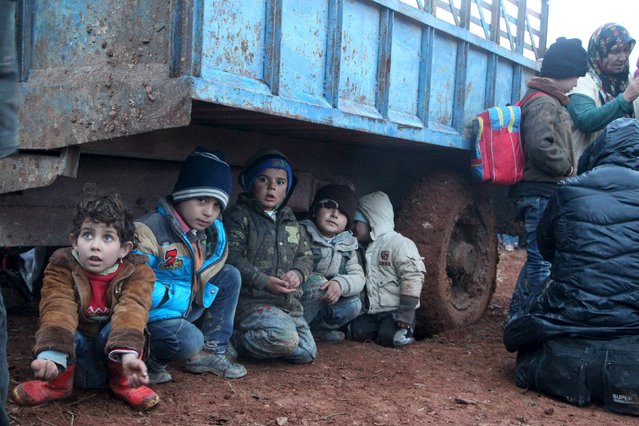 Displaced children, who fled with their families the violence from Islamic State-controlled area of al-Bab, wait as they are stuck in the Syrian village of Akda to cross into Turkey, January 23, 2016. Turkey's border guards prevented the displaced people from approaching their country's border, activists said. (Photo by Abdalrhman Ismail/Reuters) 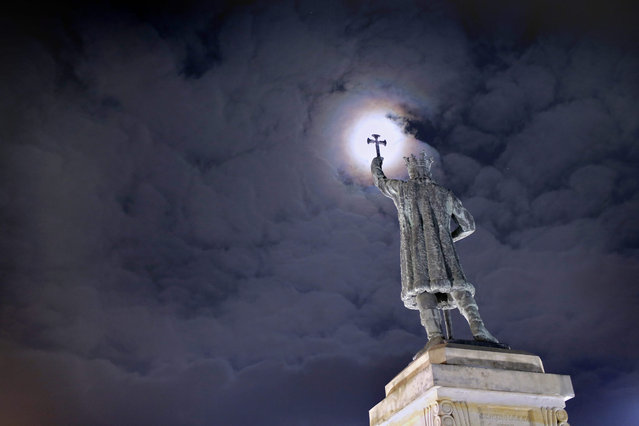 The light reflected by the full moon breaks through the clouds behind the statue of “Stephen the Great” near the government headquarters in Chisinau, Moldova, late 23 January 2016. Chisinau saw a quiet Saturday without further protests following days of clashes in the country's capital. Supporters of the politic platform “Demnitate si Adevar” (lit. Dignity and Truth), the Socialists and the “Our Party” party anounced a new protest against the new government on 24 January. “Stephen the Great” (1433-1504) was Prince of the Principality of Moldavia between 1457 and 1504. He strengthened Moldavia and maintained its independence, while achieving fame in Europe for his long resistance against the Ottoman empire. Stephen the Great, who was awarded with the title “Athleta Christi” (Champion of Christ) by Pope Sixtus IV, was canonized by the Romanian Orthodox Church as “Saint Voivode Stephen the Great” in 1992, being one of the most respected symbols in the Moldova Republic. (Photo by Robert Ghement/EPA) 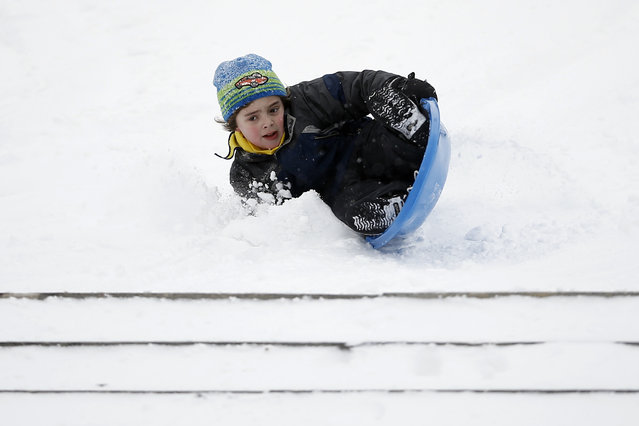 A boy crashes while sledding down the steps of the Philadelphia Museum of Art during a snowstorm, Saturday, January 23, 2016, in Philadelphia. (Photo by Matt Slocum/AP Photo) Indian paramilitary force soldiers march during the full dress rehearsal of the Republic Day parade, in New Delhi, India, Saturday, January 23, 2016. India celebrates Republic Day on Jan. 26 every year, highlighted by a march by different branches of the military as well as a display of arms and missiles. (Photo by Manish Swarup/AP Photo) 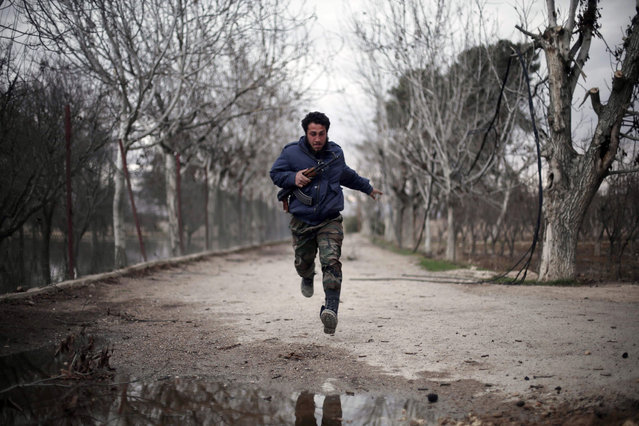 A fighter from Jaish al-Islam (Islam Army), the foremost rebel group in Damascus province who fiercely oppose to both the regime and the Islamic State group, runs in Harasta Qantara, near Marj al-Sultan on the eastern outskirts of Damascus, on January 23, 2016, during clashes with government forces after they infiltrated into the government-held area. (Photo by Amer Almohibany/AFP Photo) 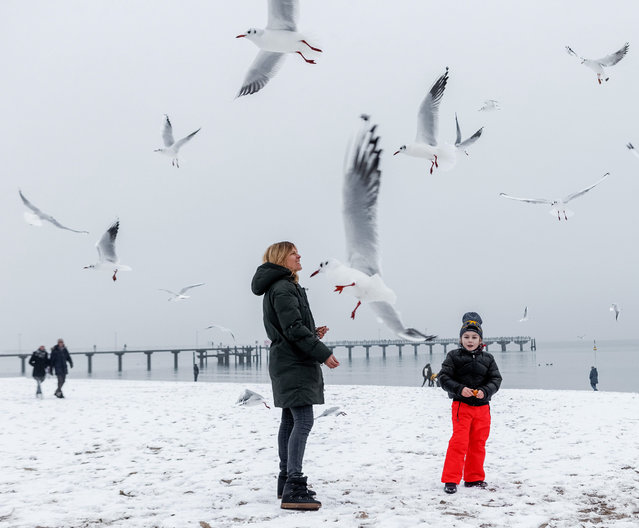 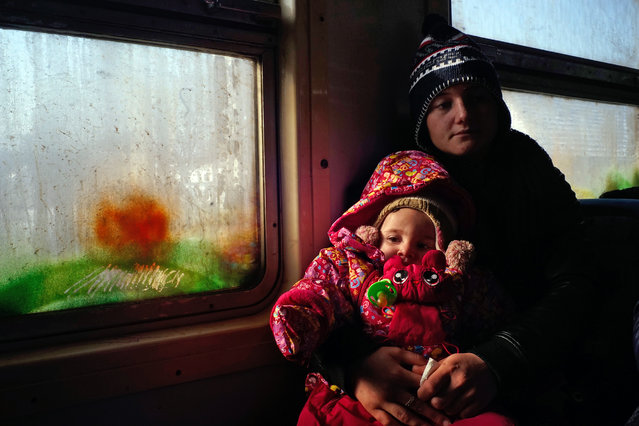 Migrants wearing winter clothing try to keep warm as they endure sub zero temperatures while waiting on a train which will take them on to the Serbian-Croatian boarder on January 23, 2016 in Miratovac, Serbia. Migrants have been braving sub zero temperatures as they attempt to cross the border from Macedonia into Serbia. (Photo by Milos Bicanski/Getty Images) 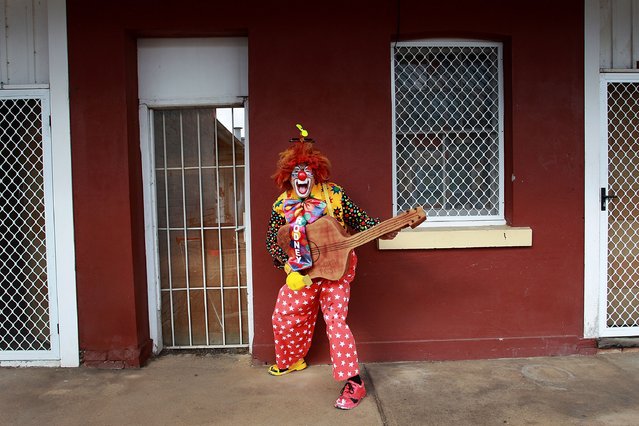