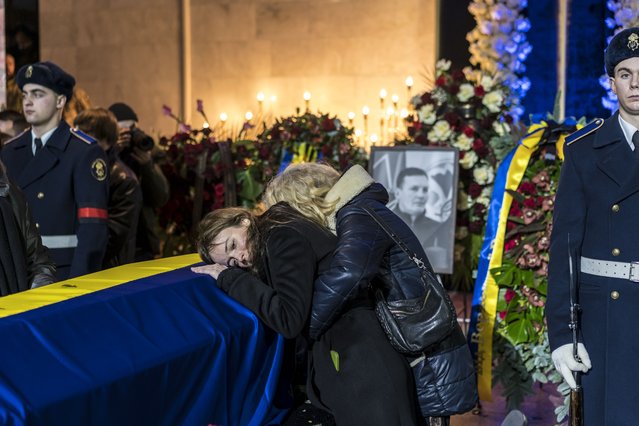 A woman mourns over the casket of Yevhen Yenin, the first deputy minister for internal affairs, during a memorial service for Denys Monastyrsky, Ukraine’s minister for internal affairs, and the eight other people who died when the helicopter they were riding in crashed earlier this week in a nearby suburb, in Kyiv, Ukraine on Saturday, January 21, 2023. (Photo by Brendan Hoffman/The New York Times) 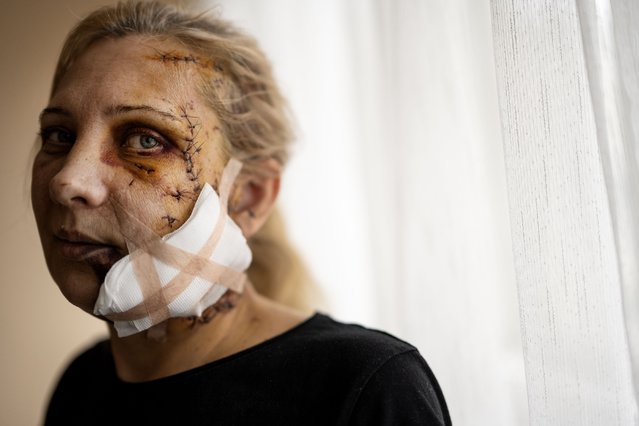 Olha Afanasieva, who was wounded in the Russian missile strike on her apartment building in Dnipro, recovers at a hospital on January 18, 2023. She and her husband were seated at their kitchen table when the missile hit. The blast blew out their windows, and glass and debris shredded half of her face. (Photo by Lynsey Addario/The New York Times) 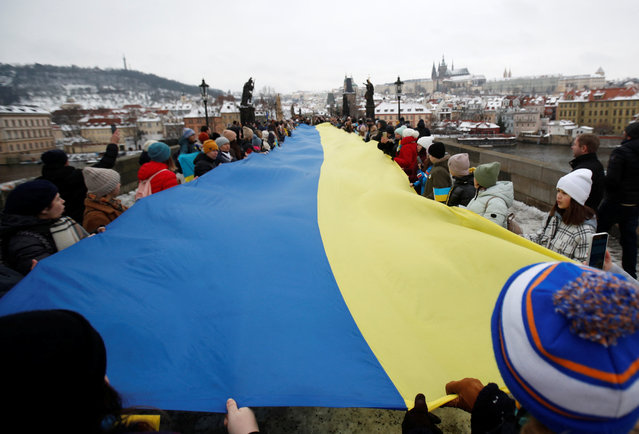 People hold up a giant Ukrainian national flag to mark the Day of Unity of Ukraine at the medieval Charles Bridge in Prague, Czech Republic on January 22, 2023. (Photo by David W. Cerny/Reuters) 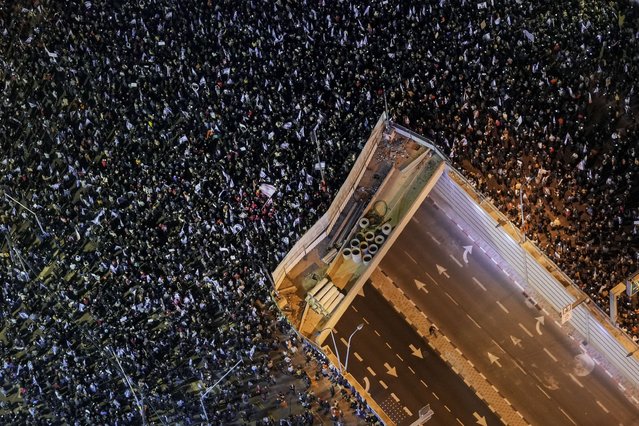 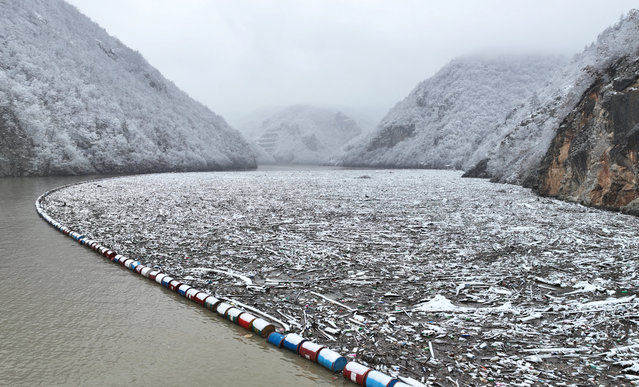 Tons of floating waste float in the Drina river near Visegrad, Bosnia and Herzegovina on January 21, 2023. (Photo by Dado Ruvic/Reuters) 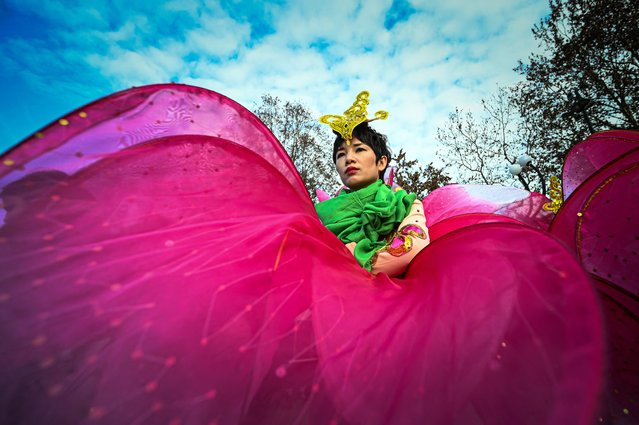 A performer takes part in a parade celebrating the Chinese Lunar New Year of the Rabbit, in central Milan, Italy, on January 22, 2023. (Photo by Piero Cruciatti/AFP Photo) 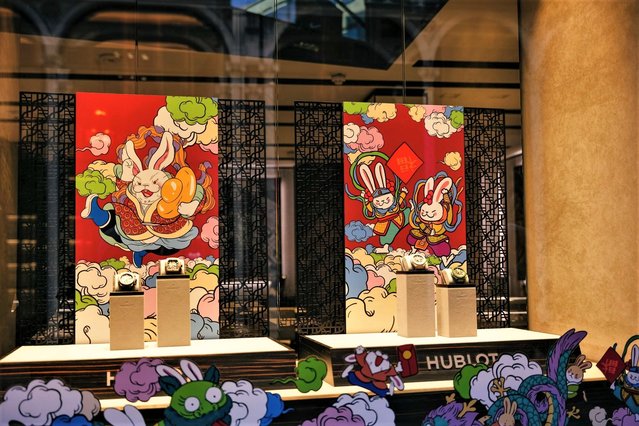 Decorations celebrating the year of the rabbit for the upcoming Lunar New Year in the window of the Hublot luxury boutique on New Bond Street in London, UK, on Thursday, January 19, 2023. The Office for National Statistics are due to release the latest UK retail sales figures on Friday. (Photo by Jose Sarmento Matos/Bloomberg) 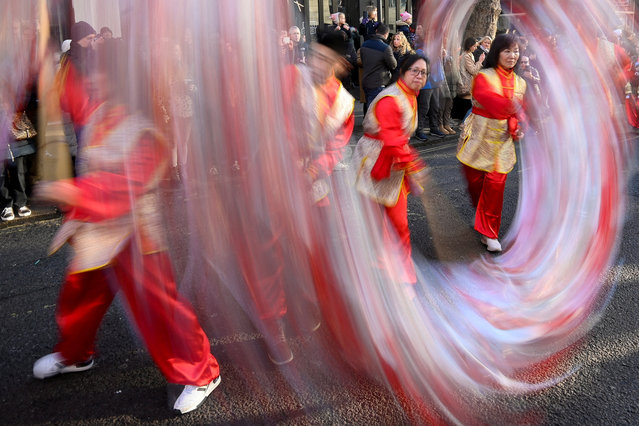 People march through a street during celebrations on the first day of the Lunar New Year in London, Britain January 22, 2023. (Photo by Toby Melville/Reuters) Worshippers prepare for a dragon dance to celebrate the Chinese lunar new year in Macau, China, 22 January 2023. Macau borders reopened earlier this month and the city has launched a promotional campaign to boost tourism, offering Hong Kong residents a “half-price” round-trip if travellers spend a night there during the Chinese Lunar New Year period. The Chinese lunar new year, also called “Spring Festival”, falls on 22 January 2023, marking the beginning of the Year of the Rabbit. (Photo by Jerome Favre/EPA/EFE) 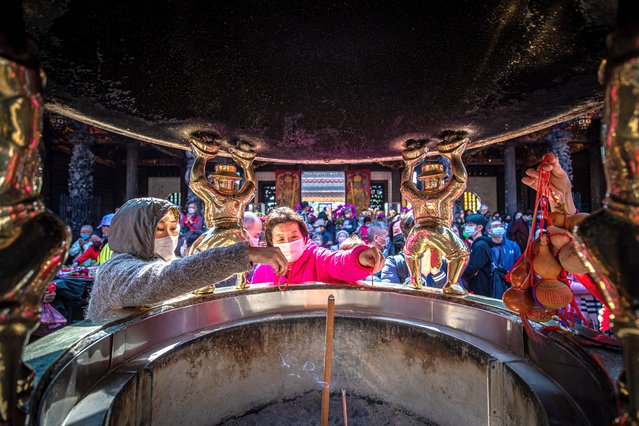 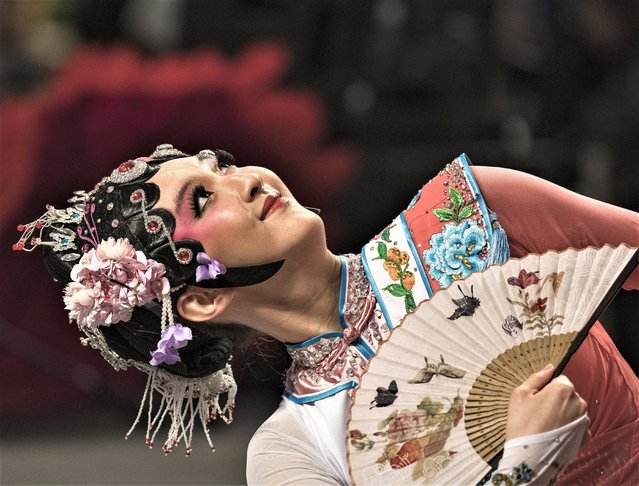 Sydney Peng, 19, who has been dancing for eleven years, performs a Chinese opera dance in celebration of the Lunar New Year, in the rotunda of the Mall of America in Bloomington, Minn., on Sunday, January 22, 2023. (Photo by Richard Tsong-Taatariii/Star Tribune via AP Photo) 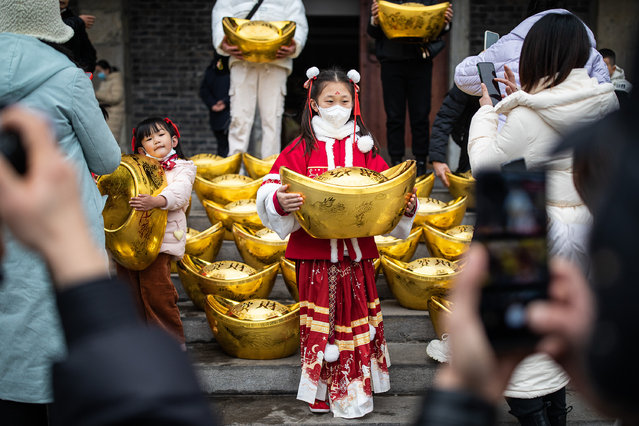 A girl holds a model of a gold ingot while posing for pictures in Expo Garden on January 22, 2023 in Wuhan, Hubei Province, China. China is marking the Spring Festival which begins with the Lunar New Year on January 22, ushering in the Year of the rabbit. (Photo by Getty Images) 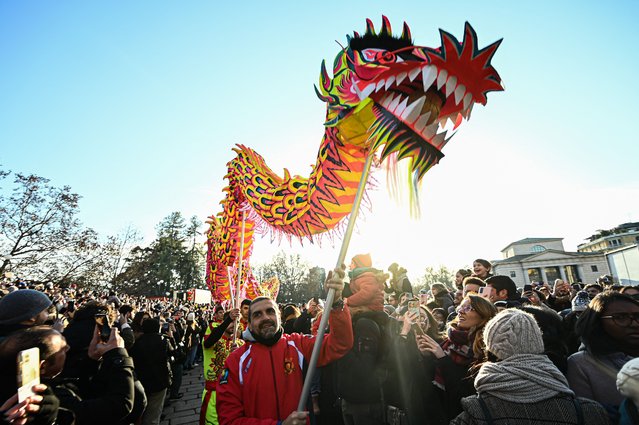 Performers take part in a parade celebrating the Chinese Lunar New Year of the Rabbit, in central Milan, Italy, on January 22, 2023. (Photo by Piero Cruciatti/AFP Photo) 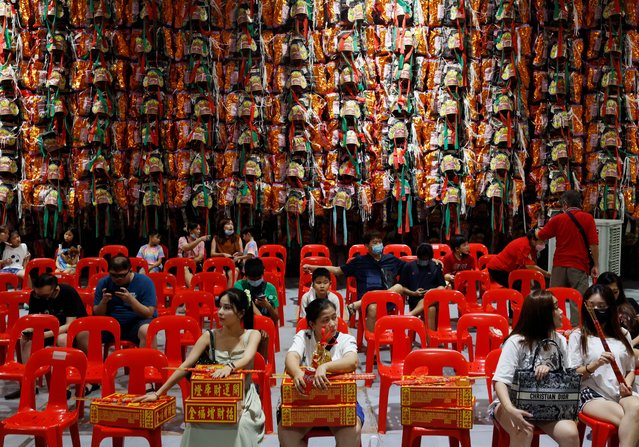 Devotees queue to offer prayers during a ceremony to welcome the God of Wealth at a temple on the eve of the Lunar New Year in Singapore on January 21, 2023. (Photo by Edgar Su/Reuters) 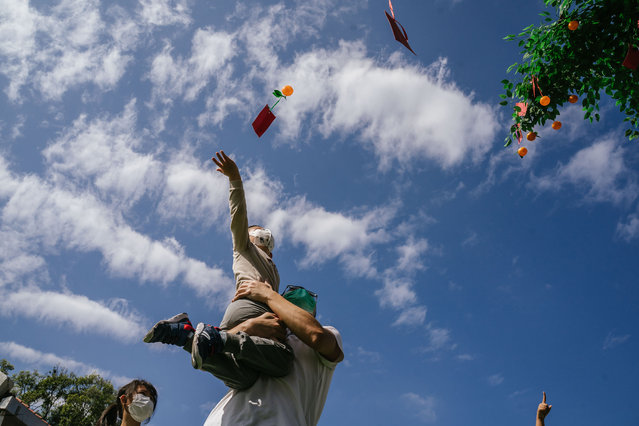 A child throws a red joss paper with new year wishes on the Wishing Tree at Lam Tsuen Village on January 22, 2023 in Hong Kong, China. Wish-makers flood to Lam Tsuen Wishing Tree for good fortune during Lunar New Year. “Bao Die” is a tradition to make red or yellow papers on which people would write down their names, dates of birth and wishes, and roll the papers and tie them with an orange, then toss them up onto the Wishing Tree. Legend has it that if the “Bao Die” does not fall down, a wish would come true. (Photo by Anthony Kwan/Getty Images) 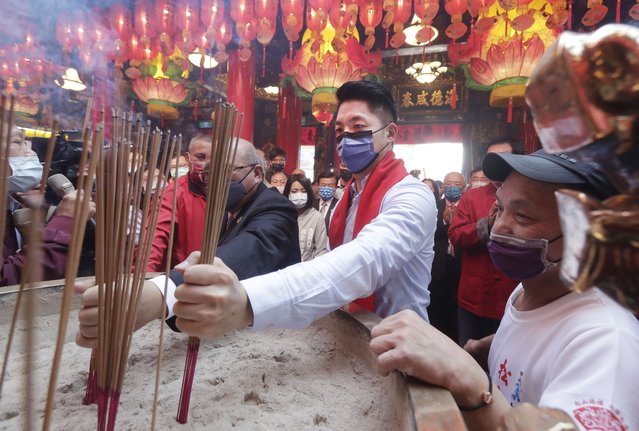 Taipei city Mayor Wayne Chiang, center, prays at a temple on the first day of the Lunar New Year celebrations in Taipei, Taiwan, Sunday, January 22, 2023. Each year is named after one of the 12 signs of the Chinese zodiac in a repeating cycle, with this year being the Year of the Rabbit. (Photo by Chiang Ying-ying/AP Photo) A woman wearing rabbit ears hairband watch a light show during the River Hongbao festival at the Supertree Grove, Gardens by the Bay in Singapore, 22 January 2023. Chinese people all over the world celebrate the Chinese lunar new year, also called “Spring Festival”, which falls on 22 January 2023, marking the beginning of the Year of the Rabbit. (Photo by How Hwee Young/EPA/EFE) 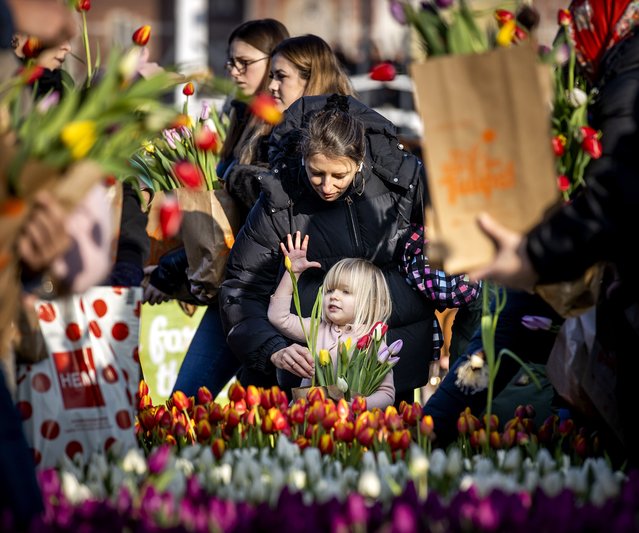 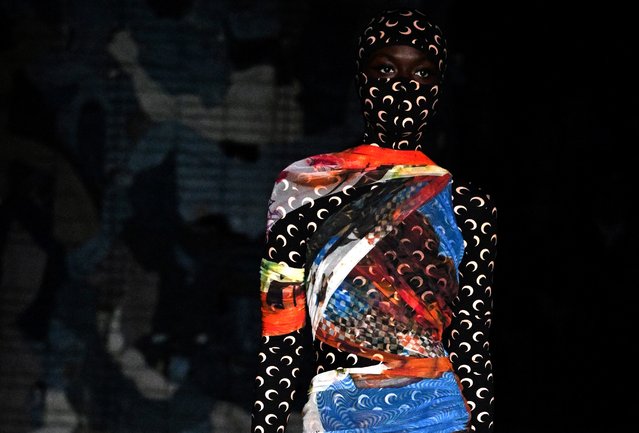 A model displays a creation during the Marine Serre show as part of the Menswear Ready-to-wear Fall-Winter 2023-2024 fashion week in Paris, on January 21, 2023. (Photo by Emmanuel Dunand/AFP Photo) 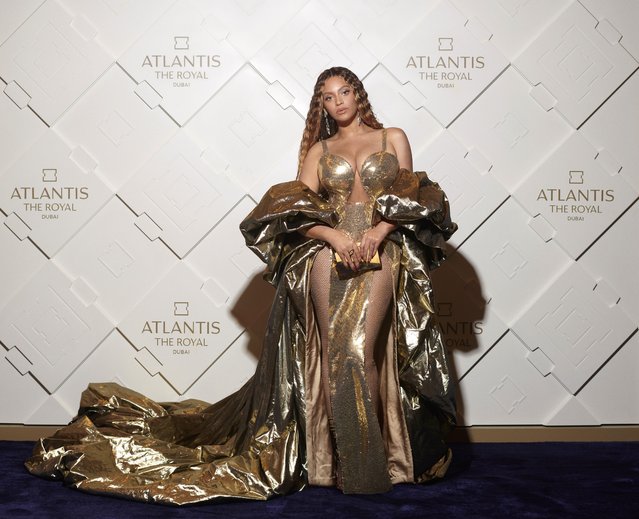 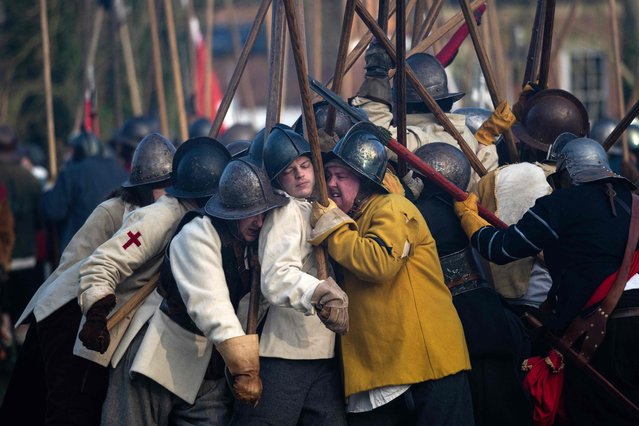 Members of the Sealed Knot, a society promoting interest in the English Civil War, stage their 50th re-enactment of the Battle of Nantwich, a battle which took place near the town in 1644, in north west England on January 21, 2023. In January 1643, Parliamentarians took the town of Namptwiche (Cheshire's second town). By the end of December, the town was surrounded by Royalists and under siege. A Parliamentarian force marched south from Lancashire under the command of Sir Thomas Fairfax and defeated the Royalists in the Battle of Namptwiche on January 25, 1644. (Photo by Oli Scarff/AFP Photo) 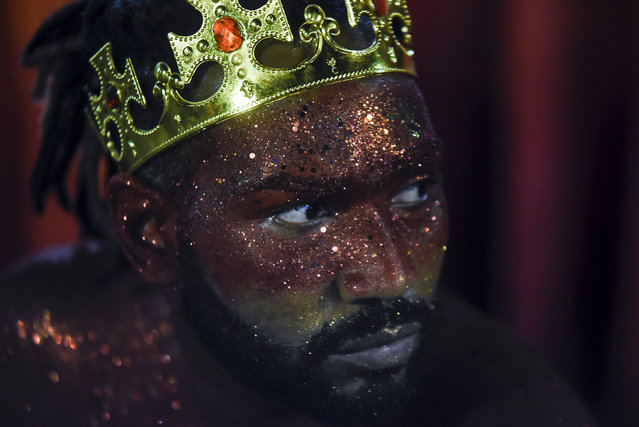